Katherine was thinking ahead and knew that she would eventually retire from the Political life once and for all Her cousin Marie Kamehameha, Charles B Kamehameha II daughter had been bitten by the Political bug and wanted to run for her father's old seat. Unlike his father he had not discouraged her but just made sure that she knew that it was a difficult life. He donated money to her campaign and got his friends to do like wise. Meanwhile Patrick O'Malley had moved into Katherine's district. He was the Grandson of Sean O'Malley close friend of Katherine's Grendfather. He had declined to go into the family business but instead had gone into the Kamehameha family's business of politics. He got a job working for the Prime Minister's district office and was a reseacher and problem solver.
He convinced her to forget about retiring in 1956 and run again.
Last edited: Dec 10, 2019

Patrick's Grandfather had been a police officer and an intelligent agent. He had worked closely with William Kamehameha for many years. He had retired and had founded O Malley Investigations and security. His father had become a lawyer and had come to work for his father. Patrick's uncles had joined the company and had been hired by some important clients. He had joined the company after graduation from college but had left it because he just didn't feel that he was a good fit. He had a long conversation with Paul Kincaid who suggested that he might like politics.

George W Kamehameha was getting older and he was beginning to wonder who would take over the running of the foundation. His oldest daughter was Prime Minister and his oldest son was going by the name Paul Kincaid as a result of an undercover assignment for the army. His Daughter Diana Kamehameha West MD had finally agreed to become the Vice Chairman and take over the William Kamehameha Foundation should anything happen to him.

Prime Minister McNamara discussed the American proposal with her Secretary of Defense and the Joint Chief. The new Secretary of State Richard Nufro II also weighed in on the idea pointing out that the US had joined the Pacific Alliance Treaty Organization and thus in that context Hawaii could go ahead with an agreement. The Chief of Naval Operations and the Chief of Staff of the Royal Hawaiian Air Force said that it would require additional construction of facilities but they were sure that the US would help with the cost. An issue that would have to be dealt with would be who would try any American for violations of Hawaiian Law. This would have to be something that both the Secretary of State and the Attorney General would have to deal with with their American counter parts.

In June 1954 the Prime Minister put before the House a bill which would allow the United States to share the Bases on Guam with the Kingdom of Hawaii. The agreement fully stated out the rights and obligation of US forces that would be stationed there. The Prime Minister clearly pointed out that Hawaiian Law would be the guiding principal. The US would pay for additional building and facilities that might be required. The treaty was submitted to the House and the Upper chamber for their approval.

The new leader of the Liberal Democrats had risen to that position in 1955. He had been elected to the House from a district in Tahiti. He was of French Polynesian Ancestry. Thomas "Tommy" Roberts was 32 years old and had just begun his plan to rebuild the Part. His goal in the 1956 election was just to make some gains in seat and he was prepared for a long term game. In 1956 Katherine McNamara lead her party to victory .The National Conservatives won 315 seats.Social Democrats stayed at 5 but the Liberal Democrats had retaken 5 seats that they had lost in the last Election. Tommy Roberts studied the election results and made plans to regain another 15 seats in the next election.

Katherine McNamara was as popular with the people of the Kingdom of Hawaii as her Grandfather and father before her. She led the party to another victory but the first signs began to appear that the people where beginning to look for a change by the lost of some seats. Katherine was beginning to tire of the stress of the job and in a conversation with her sister she knew that her father was beginning to suffer some health problems. The was also the William Kamehameha Foundation and her sister was beginning to feel the need for help as their father just could not do what he once did. Paul Kincaid left his job with O'Malley Investigations and Security to take over the legal work at the foundation. He thought about returning to his old name and life but was warned that there might still be threats out there for George Paul K Kamehameha and he couldn't put his wife and children lives at risk.
Katherine had a meeting with the King and explained that she did not want to have to keep on running. His Majesty asked that she compete this term that was just starting and consider running for another. He was convinced that only she could get the Nuclear submarine program through the House and the defense of Hawaii required it. The King had been talking with the Navy about the design for the new Whale Class Nuclear submarine and he was impressed with what he heard. 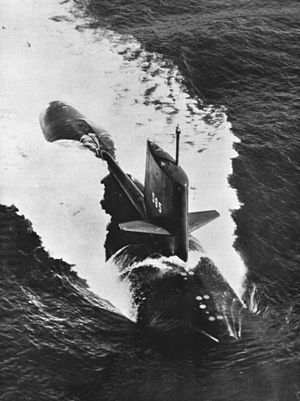 The Royal Hawaiian Navy's Design Bureau had been working with the Americans on a new submarine design. The Whale class was very similar to the Skipjack Class that the Americans were working on. There were some differences in the submarines but from a distance they would appear to be the same. Westinghouse of Hawaii was building the reactors for the submarine and the Royal Hawaiian Naval Electronics was developing a lot of the advanced gear for the Submarine. The Navy finally got the House to authorize construction of the first two vessels in 1960. Prime Minister McNamara got the bill through the house as well as funding for the next two.

The government of Hawaii had been asked by the Empire of Brazil if Hawaii might consider selling Brazil its first nuclear Submarine. In 1960 the Hawaiian okayed the lease of the Submarine to Brazil with a promise that it would render a final decision on the sale of the sub within 1 year. In 1962 the Royal Hawaiian Navy submitted plans for the construction of 12 additional Whale class submarines which would bring the total to 16 delivery was to be competed by 1972.

Prime Minister Katherine McNamara Gathered up the National Conservatives Members in the House to pass first the Naval Construction Bill and then pushed the National Defense Act through. She then adjourned the House for the Christmas Holiday and returned in January to set the budget Guide lines for 1963 in February she called the leadership of her party in the house to announce that she planned to retire from the house by May of this year. She informed her chief of staff to prepare to run for the seat she was holding. She called her cousin to give her a heads up that she was retiring from the House.
Thus the Director of the Royal Hawaiian Intelligence Agency was now aware that in a matter of Months the country would have a new leader.
Last edited: Dec 18, 2019

On May 15th,1963 Prime Minister Katherine McNamara traveled to the palace with Charles Richards. Charles was a Representative from the Big Island and had won the support of the National Conservatives in the House to be the next Prime Minister. He was 39 years old and had a BA from the University of Hawaii and an MA from the University of California. His wife was distantly related to the Great Charles Bishop and the couple had 4 children. He had become Majority leader in the last election and had worked with the Prime Minister closely on the Navy Bill.

Prime Minister Charles Richards had less than 19 months to make his mark before the next election. In July 1963 there were indications that the Hawaiian economy was slowing down and there were indications that a recession was beginning . . The Prime Minister made a move to reduce government spending so as not to make a bad situation worse. The Liberal Democrats called for new programs to stimulate the economy and for tax increases on the wealthy. Reports indicated that the recession was beginning to spread in other countries such as the Central American Republic, Mexico, Italy, Belgium, India and Canada.

How are interventionist policies like OTL Keynesianism seen ITTL?

Since this world never suffered through the Great Depression there are economist that push the 19th Century theory of drastically cutting spending and use of tariffs however there is currently a group of economist that is of the opinion that to follow the 19th century guidelines will result in promoting a policy that would turn a recession into a depression and spread its effects throughout the world. The Head of the Royal Bank of Hawaii Charles B Kamehameha II proposed that the Government stimulate the economy and work to reduce trade barriers.If Hawaii goes in this direction others will follow.

The Liberal Democrats were attacking the governments spending priorities suggesting that the defense spending increases be reduced or eliminated. The Prime Minister defended the spending but asked the Joint Chiefs to review the plans to see what might be reduced or spread out . two new Whale class SSNs were to be constructed and Hawaii would be selling 2 Non-Nuclear Submarines to the Republic of China. The submarines were declared surplus to the navy's need and the money earned would be used to offset spending.
The Air Force was now looking at replacing the P-51 with a new jet powered fighter.

Polls now indicated that the Liberal Democrats were likely to win the election but Charles Richards continued to campaign hard and with determination. The Social Democrats won 12 seats leaving 528 to be won. Both Political parties had 160 safe seats thus only 208 seats were being battled for. The results slowly began to trickle in with the Liberal Democrat winning some seats which got their hopes up and then the National Conservatives would win as many seats. By the end of election day result were still being counted. The Liberals were ahead 248 to the National conservatives 245. Thirty five seats were too close to call two days latter the results were finally in. The Liberal Democrats had won261 seats and the Conservatives 267. No party had won enough seats to have secured a majority. Charles Richards was asked by the King to form a government. The Prime Minister talked to 4 Liberal Democrats who agreed to support the government.

The Prime Minister appointed a new Education Secretary Lee Lakota, who was respected by both the National Conservatives and a large number of Liberal Democrats. He was confirmed 390 to 150. Then the Prime Minister had to appoint a new Chief. Justice to the Supreme Court. Mark Hanford Lee had bee a District Court Judge and his family had lived in Hawaii since 1852. He was confirmed with 275 votes to 265.

Prime Minister Richards was very careful in the battles that he chose to wage. his majority depend upon those 4 Liberal Democrats that had agreed to support him he reached out to people that he could work with. Thus Secretary Lakota might not have been chose if Richard had a solid National Conservative Majority but the Prime Minister had not regretted picking him.
Threadmarks
You must log in or register to reply here.
Top
Top