The Fall was to greatly affect the development of both Australia and New Zealand. Both colonies were developing but the Fall was going to force many changes upon them

The British government was evacuating the population of the British Isles and attempting to relocate them to South Africa, India, Australia or New Zealand. The Majority going to India, Australia or South Africa with a trickle going to New Zealand. With the need to evacuate Canada the Kingdom of Hawaii was taking in refugees from that country but more wanted to go to another crown colony and thus 2/3rd of those proceed to Australia and 1/3 to New Zealand. The states in Australia were in various degrees of advancement but there was a need to develop industry. The Royal Bank of Hawaii was loaning money to Australian bussiness that desired to expand and which could aid the Hawaiian economy.

Hawaii was looking for a source for iron ore,coal and other supplies and it found that Australia could provide a lot of the materials that Hawaii needed. Hawaii was producing steel but it needed a lot of supplies to manufacture it.

Hawaii made contact with the government of both colonies beginning a close relationship with them Hawaii proposed close co-operation to protect the sea lanes and to prevent piracy.

Indeed with the British tied up relocating people from the British Isles to various places there was simply a lack of resources to respond . The result is that both Australia and New Zealand decided to act on the Hawaiian proposal.Charles Bishop traveled from Hawaii to meet with the government of Australia and New Zealand to flesh out the ideas.
Last edited: Jun 24, 2020

The Hawaiians had been working on some British ship designs and now they offered the design to the Royal Australian Navy. The ships would be built in Australia. Hawaii also agreed to accrept 6 Australian Midshipmen cadets at its Naval Academy.
Last edited: Jun 24, 2020

Charles Bishop had also signed an agreement with the government of New Zealand which would allow that country to send 6 cadets to the Royal Hawaiian Naval Academy.

The 1870s saw the start of co-operation between Australia, New Zealand and the Kingdom of Hawaii. The Hawaiian had alreay secured control of a lot of Spain's Pacific Island colonies and had transported the Spanish troops to the Philippines. With a western Naval base now at Guam the Royal Hawaiian Navy coordinated its naval patrols with its allies and worked on helping to arm the new Royal Australian Navy and the Royal New Zealand Navy.

Australia and new Zealand had gained a lot of people as a result of the Fall and the relocating of Canadians and people from the British Isles and while Australia had plenty of natural resources it lacked capital to develop new industries and expand others. In addition Australia and New Zealand were now aware that they could not depend upon Britain for anything. The British Governments resources were stretchered to the breaking point. Thus Hawaii's offer of assistance was welcome. The Royal Bank of Hawaii had enough resources to loan money to get the ball rolling. The Royal Hawaiian Arms Industry was capable of manufacturing small arms and had also developed guns for the Royal Hawaiian Army and Navy. Hawaii was offering to trade its surplus small arms to Australia for access to natural resources that Hawaii lacked.

The Hawaiian Government was fully aware that British attention was concentrated on the relocation to India and it knew thatsomeone had to make an effort to help fill in. Thus The Hawaiians acted to form an alliance with the Australian and New Zealand Governments so that together they could deal with the problems of piracy, trade etc.

The Hawaiians conducted training exercises with the Australians. They took some Australians aboard the Hawaiian Warship leaving 25 sailors behind in Melbourne. The Decision to set up a combined Naval Command in Australia was thought as a means to help train all three navies in joint operation.

The Fall had created a large lake in Australia

Australia and New Zealand were both given responsibility for Trust. This was to prevent threats to the region and the development 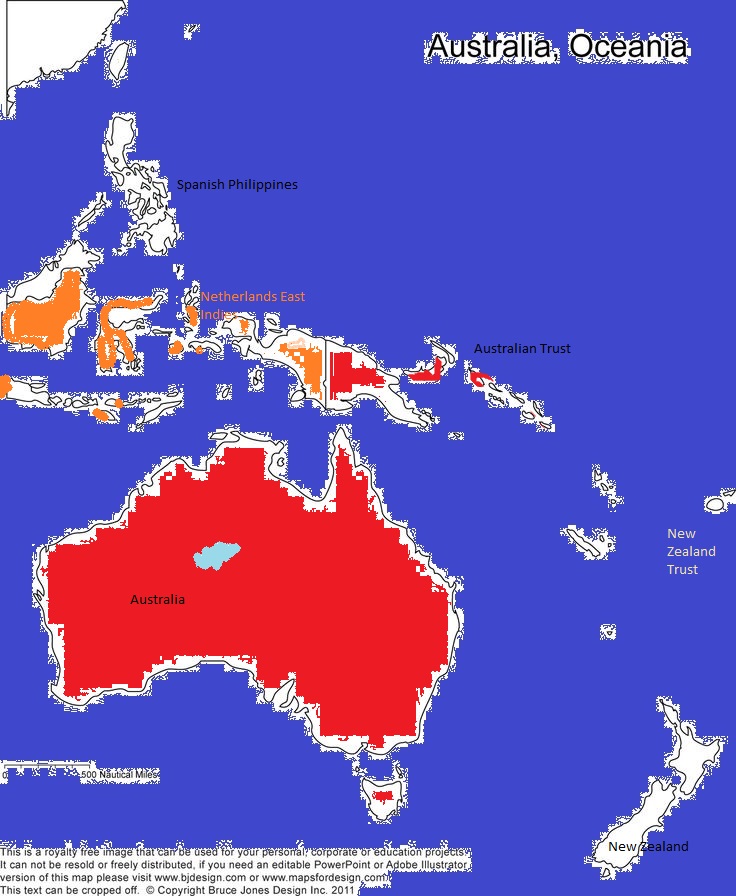 The Fall had really changed Australia> The winter following The Fall were not as bad as those in Canada, United States or Europe but it had seen a lot of rain resulting in Lake MacKay massively increasing in size. It also saw Australia rather quickly see a massive (600,000+ ) increase in population. Australia now began to pull itself together as the nation realized that it could no longer count on the British Navy. The Royal Bank of Hawaii became a major investor in the Australian Economy.

The new Federal Government of Australia ordered the creation of an Australian Army and after 90 days of training 2 of the Battalions were deployed into the island territories of New Guinea and the Islands to the north of it.

Australia with aid from Hawaii was beginning to fill the vacumn to prevent a possible threat to Australia and the trade routes New Zealand also began to assume a role and a Battalion of Maori troops landed in Fuiji to insure the msintence of law and order.

An Australian Infantry Battalion was busy securing New Guinea. The HQ company and two infantry companies had secured Port Moseby while two companies were moving on separate objectives. Meanwhile an Australian force was landing on Rabul to secure that Island. An Hawaiian warship was joining the group to provide additional supposrt.
You must log in or register to reply here.
Top
Share:
Share
Top