Was it ever possible at one point for the southeastern Chinese province of Fujian to be annexed by a colonial empire (perhaps with Taiwan as part of the package), most likely Britain or France? 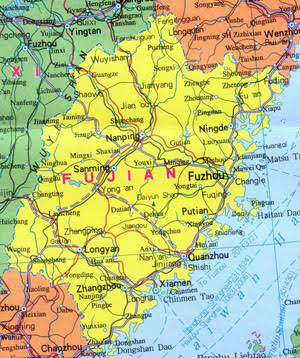 GauchoBadger said:
Was it ever possible at one point for the southeastern Chinese province of Fujian to be annexed by a colonial empire (perhaps with Taiwan as part of the package), most likely Britain or France?

Japan?
Could Fujian come to no longer see itself as Chinese?
Last edited: Aug 1, 2020

If china exploded (as it does) and there was no dominant warlord able to unite china fast enough, this would be possible. But in my thread about a hypothetical "scramble for china," consensus seemed to be Europe wasn't in town for more chinese food than the ports it got. Population, culture, and infrastructure simply aren't on Europe's side, so it wouldn't be profitable.

As for Japan, I always run into the question "how much of China can japan take while being a Japanese empire and not a chinese dynasty with japan?". And long term holding this would only hasten that sinnicization. Maybe it's just me

Perhaps you should think about why colonial countries did not annex Fujian in OTL first, such as looking at topographic maps.

It seems like it would be a tad expensive. One of the main things was being both able to buy and sell whatever they wanted from the Chinese. If this area became a colony it would likely face an embargo from further inland. Also, good thing to keep in mind is how in the past the Chinese would utterly depopulate a coast for several miles inland to prevent pirates or raiders from getting too many resources, I will need to check out the book on The Opium Wars that menton it frommthe library the next chance I get and see exactly who it was related to. I think from when one dynasty turned Taiwan into their backup base? Ming I think?
You must log in or register to reply here.
Top
Top