Utgard96 said:
The preliminary count of the Finnish election is wrapped up, and I've mapped it.
Click to expand... 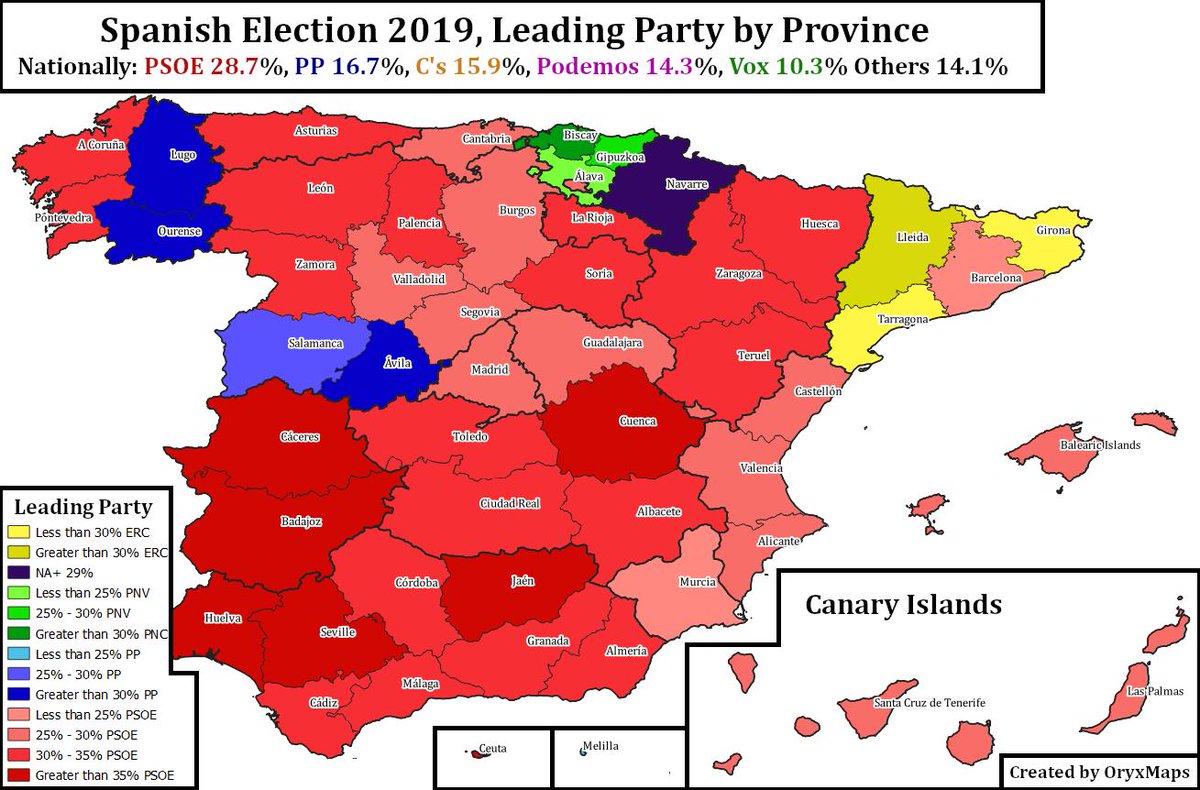 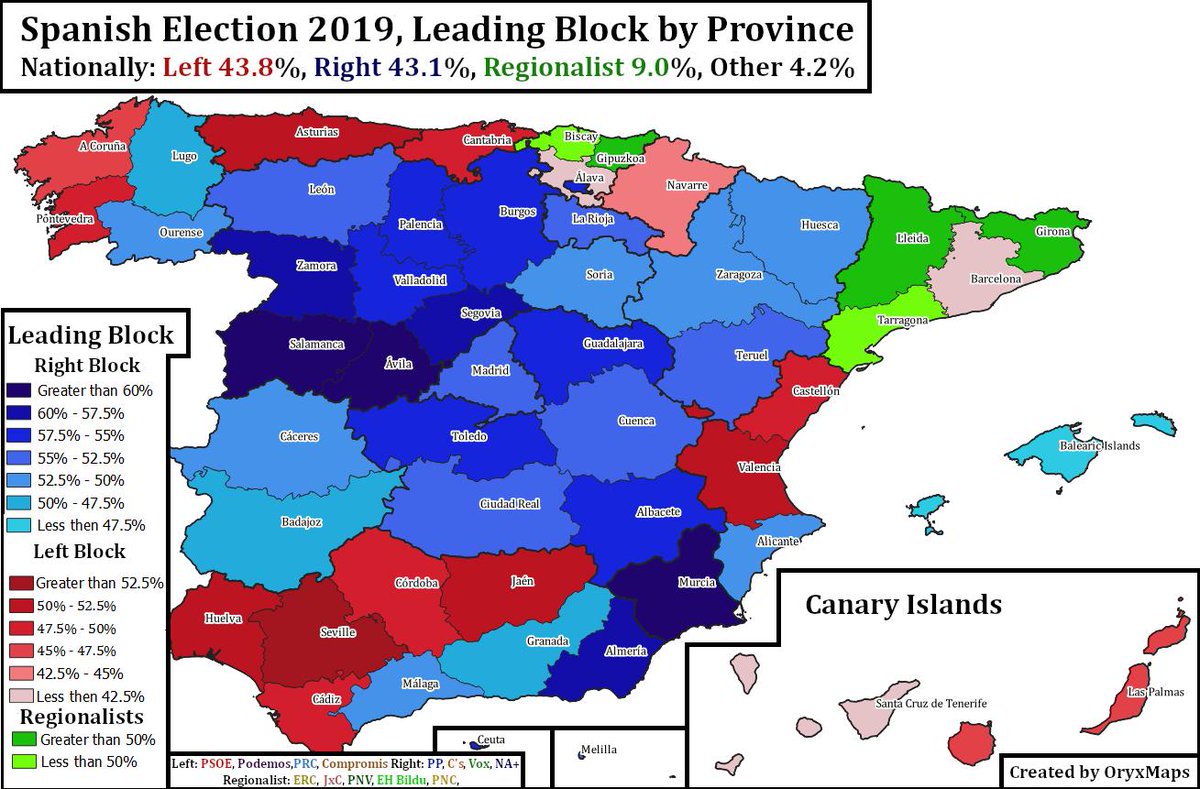 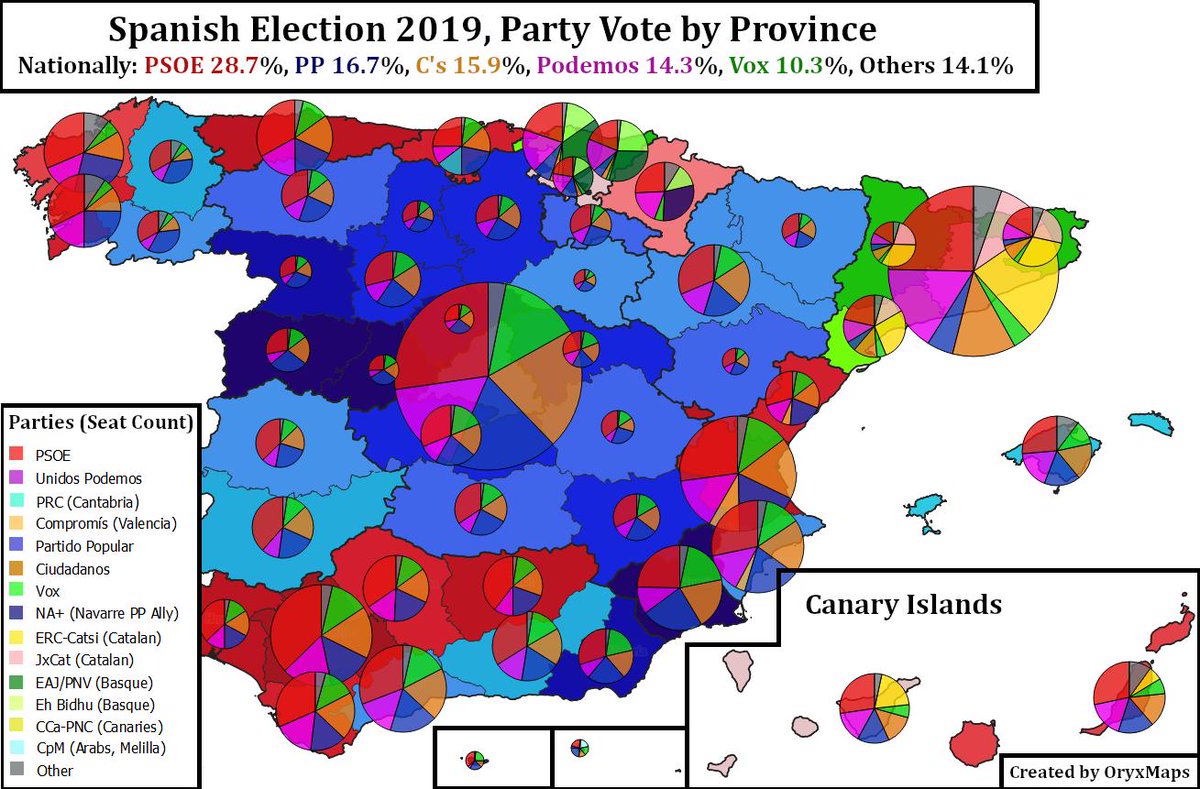 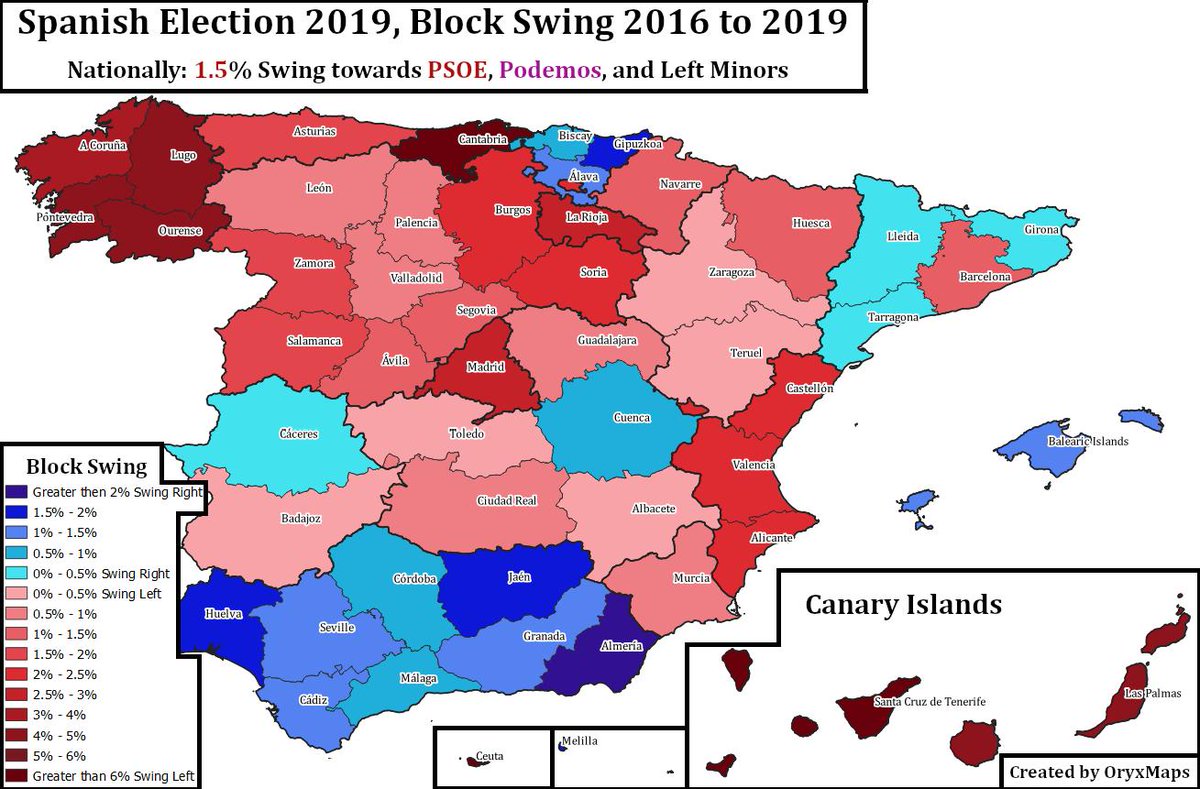 Utgard96 said:
These were my results.
Click to expand...

What is the one FDP constituency in the Rhineland?

Stahlheim said:
What is the one FDP constituency in the Rhineland?
Click to expand...

Half of Wuppertal, which is one of few parts of western Germany to be primarily Protestant. The FDP and CDU stood joint candidates in both seats, and the FDP got the western half.

Utgard96 said:
Half of Wuppertal, which is one of few parts of western Germany to be primarily Protestant. The FDP and CDU stood joint candidates in both seats, and the FDP got the western half.
Click to expand...

Slightly related to the above question, but is there a reason why the FDP are seemingly very weak at the constituency level in federal elections?

Gonzo said:
Slightly related to the above question, but is there a reason why the FDP are seemingly very weak at the constituency level in federal elections?
Click to expand...

No real incentive for them to pursue targeting, since the electoral system guarantees them the same level of representation whether or not they win any constituencies. And conversely, because the constituency elections are FPTP, you get the same tactical voting phenomenon as in the UK. 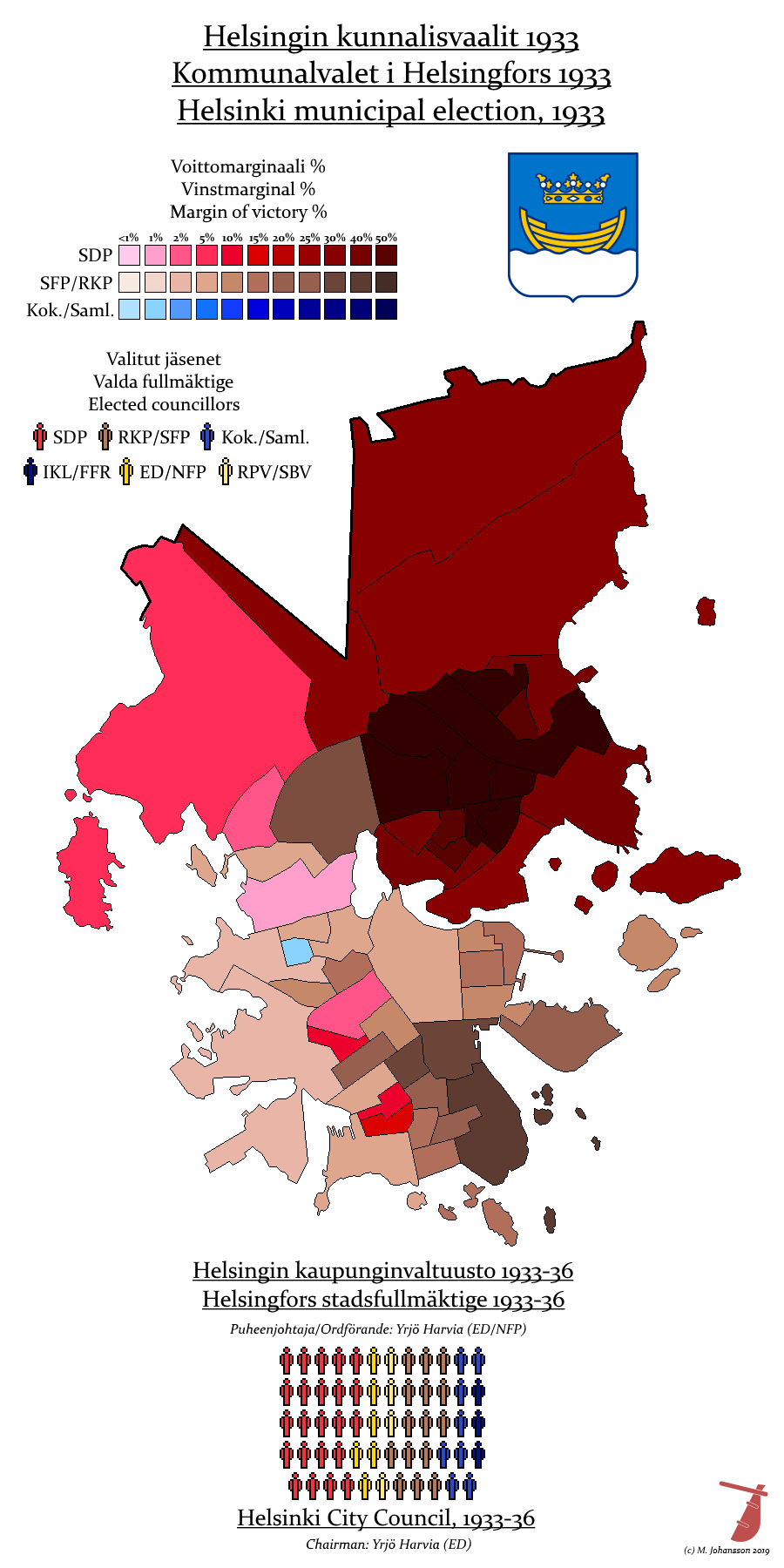 SBV is short for Svenska Borgerliga Vänster?
Last edited: May 8, 2019

It was common in the 19th and early 20th century to use antiqua in texts aimed at more educated people while fraktur, familiar from the Bible, was used for the wider audiences (i.e. Finnish-speakers).

So these are the first two maps of the 1979-1980 Basque election maps. The Vizcaya and Guipuzcoa provincial assemblies' maps, with their odd executive which was reflective of the elected members in each constituency (so, forcibly multi-party). This was the only instance in which this system was used, starting with the 1983 election, the Juntas Generales would work as a regular parliamentary system, with an executive reflective of the parliamentary majority.

I'm separating the various provinces partly because they ran different elections but also because Álava has a completely different electoral system (people voting for local councillors, who in turn elect from among themselves the provincial assembly and the provincial executive). Álava will come later, and so will the 1980 regional election. 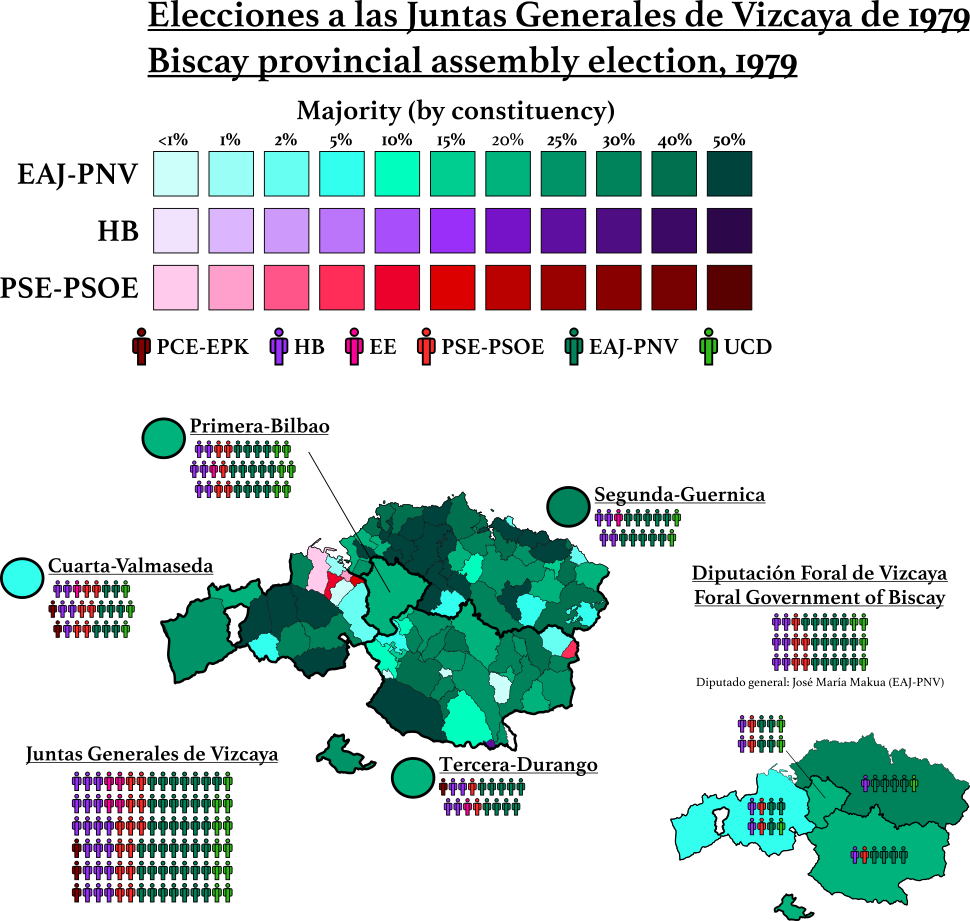 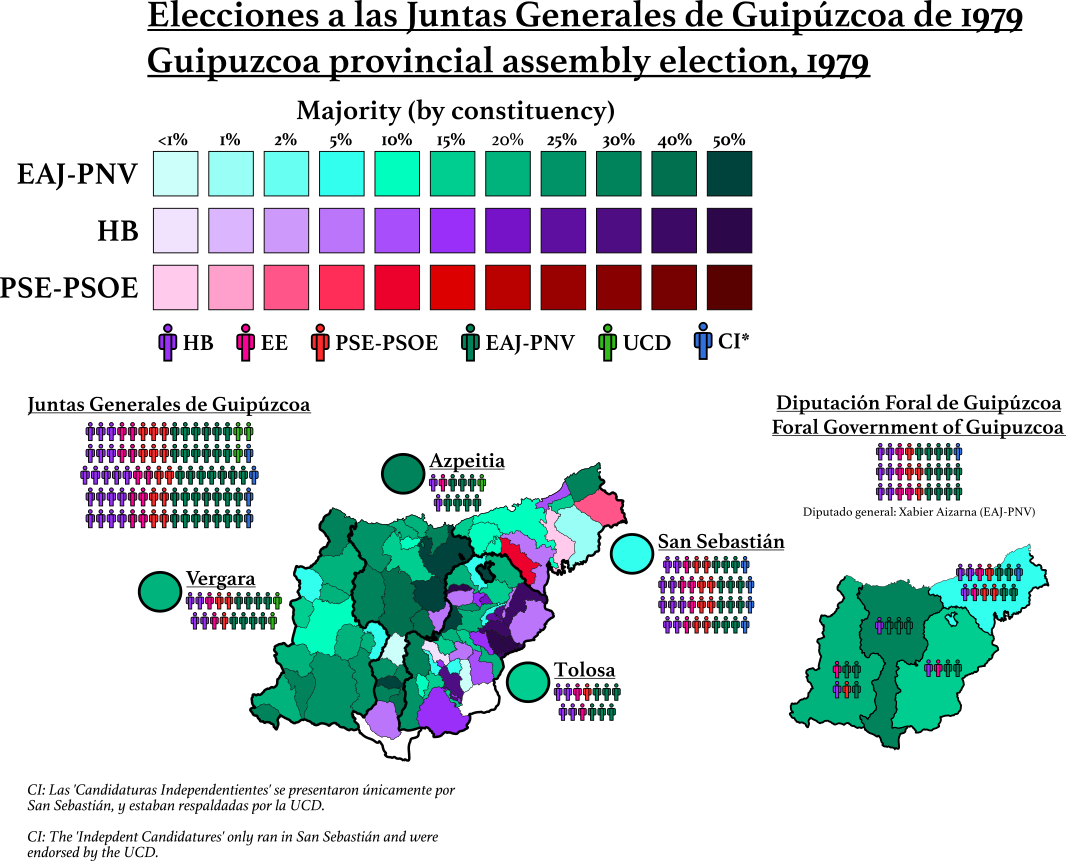 2014 European Parliament election within the UK 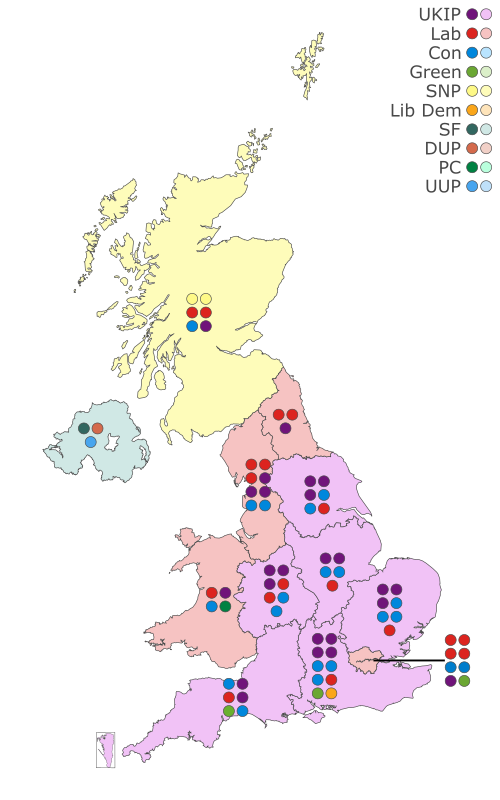 The 1976 Senate election in Texas. Lloyd Bentsen won largely thanks to overwhelming margins in rural areas and a narrow win in Harris County (Houston). Republican Alan Steelman did very well in the suburbs and some traditionally GOP counties near Gillespie County. Bentsen put in an impressively strong performance in the Panhandle, only losing a single county there. 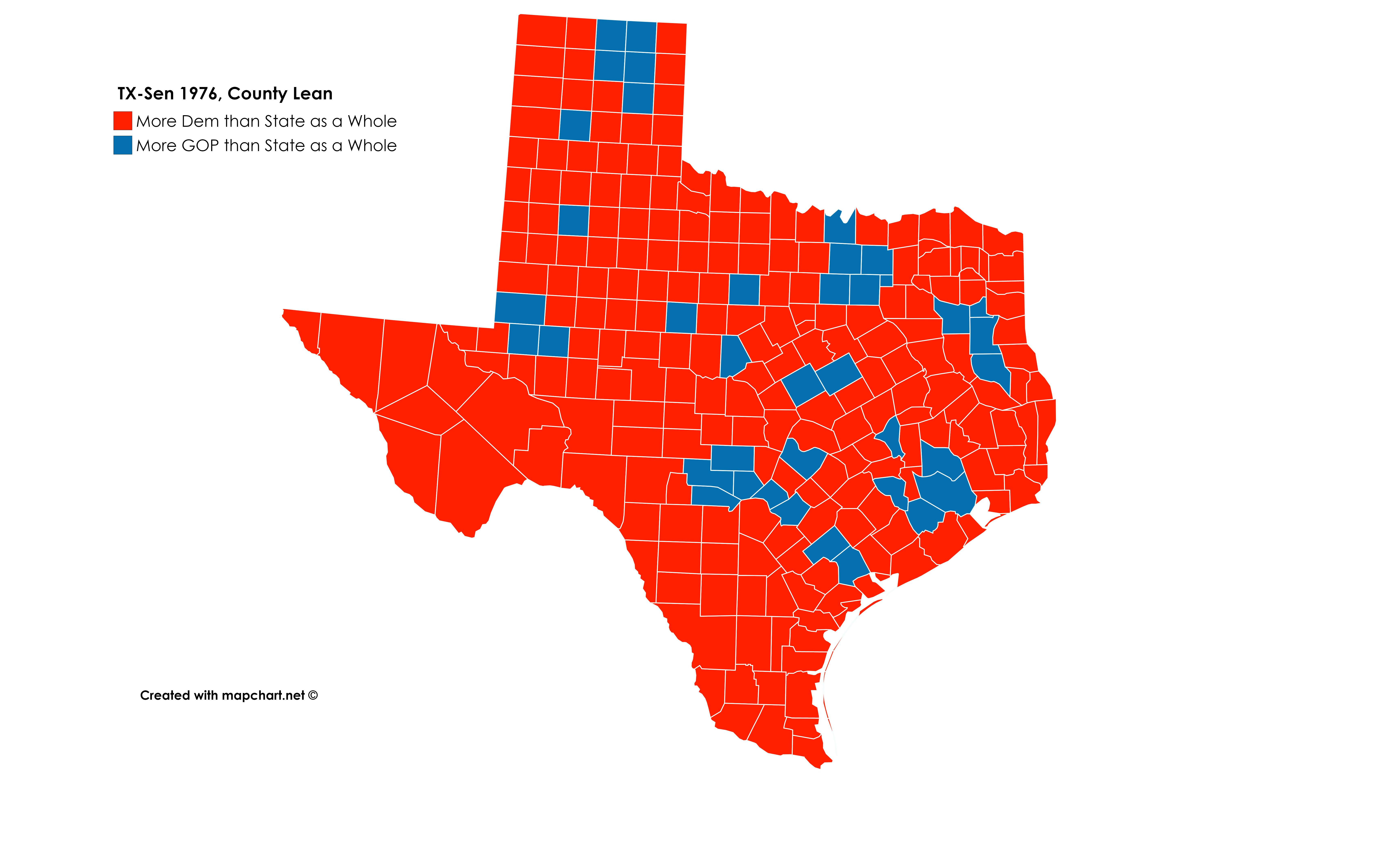 And this is the partisan lean by county. as you can see, this looks eerily similar to a modern election in Texas, except reversed.

These are some local elections' maps from the Spanish Second Republic.

So here's Madrid in 1931. These are the old city boundaries before the city tripled in size and doubled in population in the 50s by incorporating a good chunk of surrounding municipalities. The 1931 elections were held under the 1907 electoral law's system, which established a simple SNTV system where the 3-7 most-voted candidates, regardless of party affiliation were elected.

The law prescribed that electoral districts should elect ideally 4 members but the permitted range was from 3 to 7. In Madrid, the 50 members of the City Council were elected in 10 5-member constituencies that matched the city's districts at the time. Voters were could vote for several candidates depending on the size of the district. In the case of Madrid, voters could vote for up to 3 candidates out of the 5 seats.

As a result, in Madrid, the candidatures would only present 3 candidates, usually resulting in a 3:2 division between majority coalition and minority coalition. As is the case in Madrid. There were two coalitions, the anti-monarchist (Republican-Socialist Coalition) and the monarchist one.

The election was a great victory for the republicans, with the anti-monarchist bloc gaining 69% of the vote and 60% of the seats. The republicans were strongest in the south of the city, which was - and is - more left-wing. Instead, the monarchists were strongest in the then-district of Bellavista, which today corresponds roughly to the Salamanca and Retiro areas, where the right is near-hegemonic today. 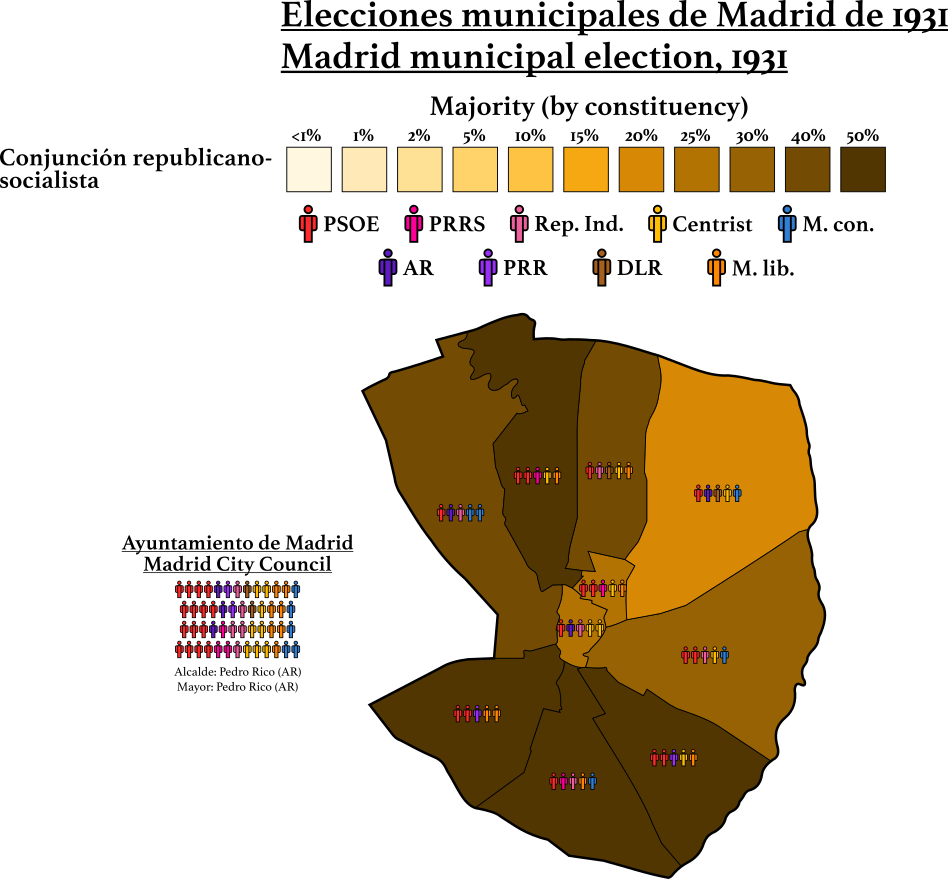 ​
In Barcelona, 50 members were also elected from 10 districts corresponding to the city's ten districts under the same system as in Madrid. But here district size varied more, from 3 to 6 members elected depending on the district. The support for the Lliga to this day corresponds well with the areas where the right does better, with the exception of Ciutat Vella, which is now more of a bohemian area, voting for the CUP in regional elections.

Also, unlike Madrid, Barcelona's city boundaries have roughly remained the same since the early 1920s.

In here, there were three blocs - a Republican-Socialist Coalition formed chiefly by the PRR (by far the strongest anti-Catalanist party in Catalonia) due to the weakness of the PSOE in the city and the flirtation with Catalanism of the republican left.

Then there was the Esquerra Catalana (Catalan Left) coalition, formed by ERC, the Catalanist socialists of the USC and some minor parties. At the time ERC was a broad home of people ranging from centre-right republican Catalanism to Marxists, but it was nationalist first and left-liberal second.

Lastly, the Lliga Regionalista (Regionalist League), that had been the strongest party in the city and in Catalonia since the early 1900s, was the main centre-right party. The Lliga was soft-monarchist (aka. didn't give a shit) but more conservative than Esquerra and pissed at no longer being the vehicle for Catalanism in Spanish politics. 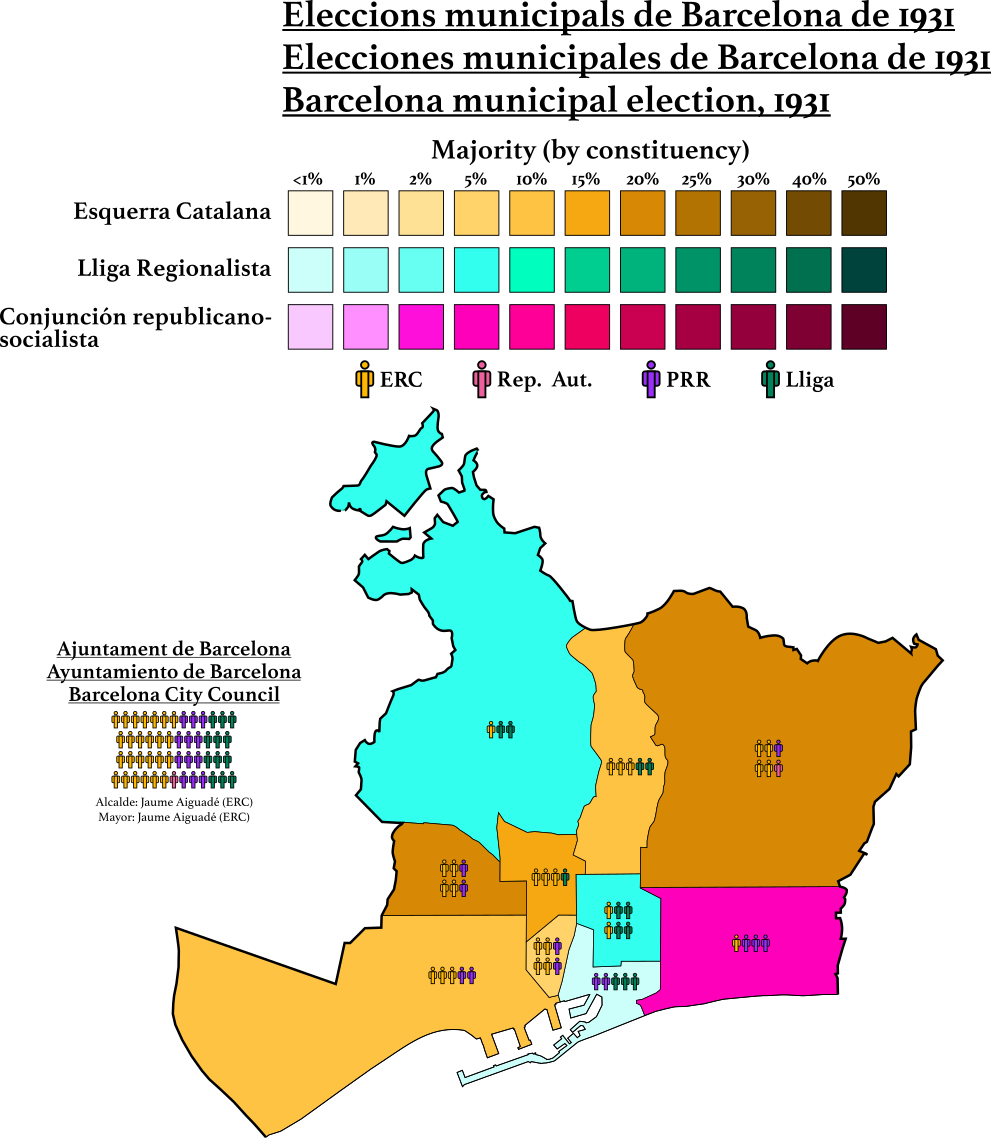 In most of Spain the 1931 ones were the only local elections held democratically until 1979. Not so in Catalonia where the powers over holding local elections were transferred by the Estatut of 1932. As a result, the Generalitat drafted a new electoral law and organised local elections in 1934. Unlike in 1931, Barcelona was now an at-large constituency.

In the weird, typically Second Republic-style electoral system, the most-voted list of candidates obtained 66% of the seats, the second-most voted, the 66% of the remaining seats and so on. Barcelona's city council was reduced from 50 to 40 members, of which 26 were members of the 'Coalició d'Esquerres' coalition between ERC, USC, the ACR (centrist Catalanists) and the PNRE, a party that broke off from the ERC because it thought the party was too moderate by acquiescing to autonomy.

The main opposition was the 'Lliga Catalana' (the new name of the Llega) which also included a Carlist (Comunión Tradicionalista) among its elected members. 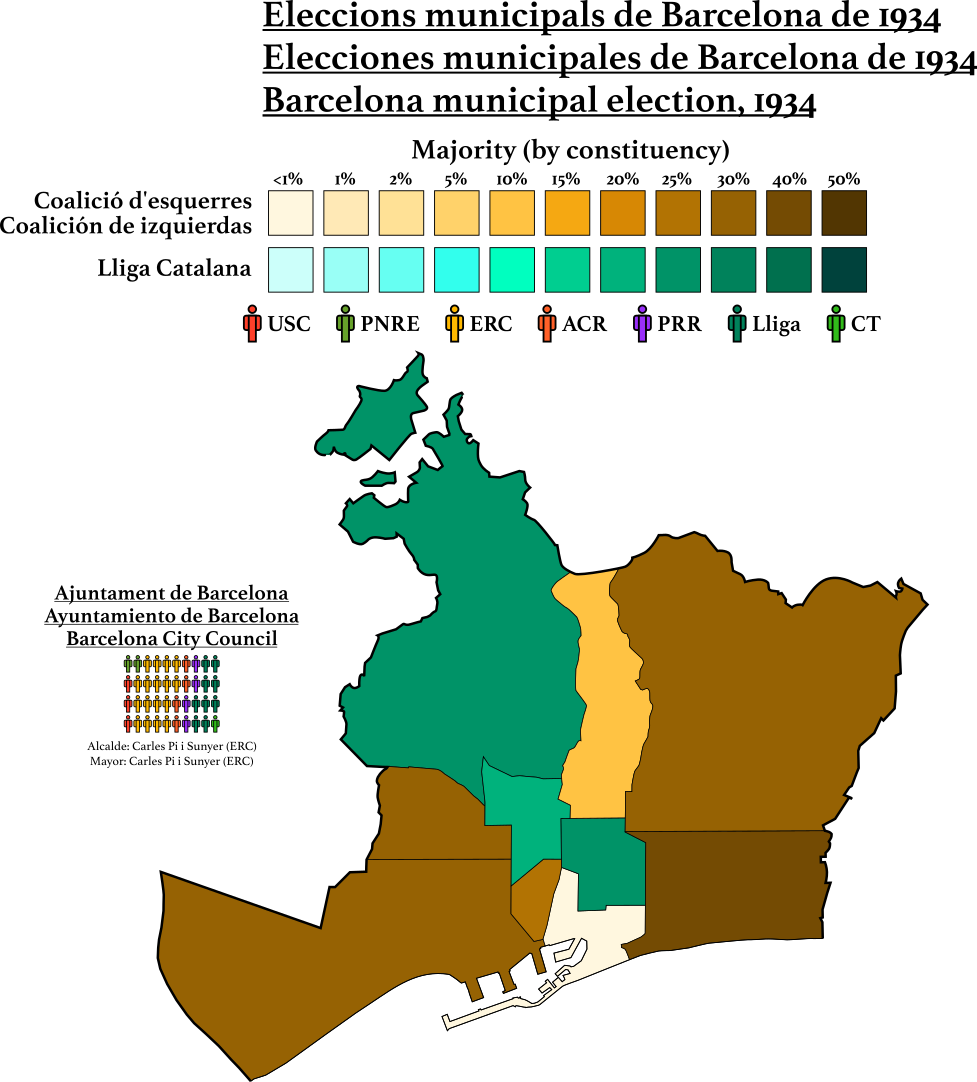 Hey, can I do the EU Election once the results are tallied up? 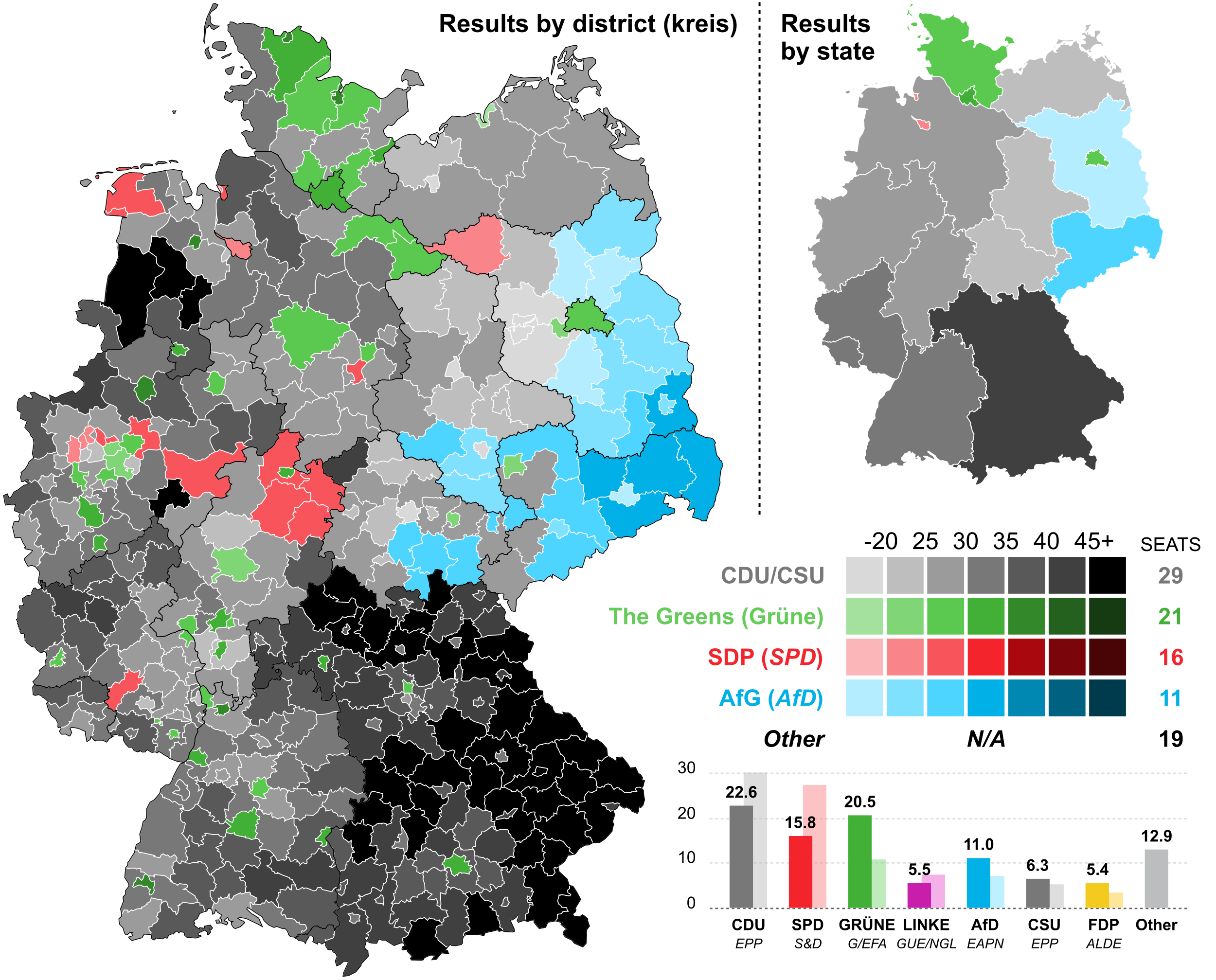 European Parliament election results for Germany by district and state.
Last edited: May 29, 2019

I see the Tal der Ahnungslosen continues doing its thing.
You must log in or register to reply here.
Top
Top