Osman Reborn; The Survival of Ottoman Democracy [An Ottoman TL set in the 1900s]

Ski-U-Mahdi said:
No Islamic school of jurisprudence would consider interest based loans permissible.
Click to expand...

You will find that in the Ottoman Empire, often the Ulema will find permissible whatever the Sublime Porte considers convenient to be permissible. And any that protests about it would find life quite difficult for themselves.

Not that I have the best understanding of either Islam or Ottoman history, but like didn't the Ottomans take out loans that had interest? If they're already doing that why couldn't they turn around and justify giving loans.

Pio2013 said:
I thought the same. But other ethnic groups doesnt see this as forbidden. Maybe most of the loans are carried by ottoman greeks, armenians or 3rd parties.

Or theres some islamic school thats more open to jurisprudence regarding international trade. But i let that to someone who knows better the issue of loans and islam.
Click to expand...

There are Islamic investment models that exist, although the finance they provide is not strictly a loan....

Pio2013 said:
Did a little search, and one of the core concepts in islam banking is "riba", the increase, the interest. If i understood it well, you cant lend money and expect more than you had lent.

Maybe if the interest for loans is treated as something else, it wouldnt fall in prohibitions. I mean, recieving the equivalent value of the total interest in goods and services though a cooperative, or as a donation, or something related.

Allowing the proliferation of such financial tools in an islamic society would be impermissible regardless of who is doing it.

Lord Khuzdul said:
You will find that in the Ottoman Empire, often the Ulema will find permissible whatever the Sublime Porte considers convenient to be permissible. And any that protests about it would find life quite difficult for themselves.
Click to expand...

I would imagine that this isn't the case in the more democratic ottoman society that is in this TL.

i am not sure why loaning would be such an issue. According to Ribā and Interest Concept and Banking in the Ottoman Empire by Neş'et Çaǧatay, the Ottomans gave loans with interest starting in the 1590s, so while it does not match up theologically, the ottomans did it for 320 years already by the 1920s for the theoligicians to really care about it

Ski-U-Mahdi said:
Allowing the proliferation of such financial tools in an islamic society would be impermissible regardless of who is doing it.
Click to expand...

There are ways of providing sharia compliant financial instruments

Given how screwed over the Ottomans were by international debtors (The Ottoman Public Debt Administration was essentially a second non-government controlled bureaucracy which nearly strangled the empire) is it really a surprise they would want to cultivate their domestic banking sector to avoid a repeat, or even try their hand at international loans and the power they can grant themselves?

Well this has been a interesting chapter, I suspect at the end of the day it would be natural for the US and Ottomans to hostile to each other, USA being a nation of immigrants would inherit the attitudes of hostility towards the Ottomans, but well with little reason to deal with them besides the barbary pirates would stay hostile unlike Christian Europe who has to live with them, add them being a resurgent empire with a interest in Latin America, a counter example to the idea of full democracy being the greatest system ect I guess their bound to clash.

By the way I'm curious how the Ottoman identity will with ethnicity as time goes on, as well identity has always been complicated and specially with the rise of Arab nationalists I wonder if a counter will form loyal to the empire.

For example say in the case of the Kurds, with the exception of those in Persia they've been in the Ottoman empire for most of their history, their have couple of languages that don't really mix well with each other with Sorani being dominant in Persia, I wonder if you could have nationalists parties focused on their ''type'' being insurgents leads others of the same to veer into their Ottoman identity.

Such as say for Arabs the Arabs of Lebanon having already some control thanks to the French, vital port and strong connections to Europe would likely if they tried to rebel against the Empire would be opposed by the Arabs of Greater Syria.

I think you can kind of see it occur already with the Zionists in the Sinai as well given a lot of them are European Jews I think you could see Jewish Nationalism defined by Yiddish than Hebrew, well in their community.

boredviewer1234 said:
a counter example to the idea of full democracy being the greatest system ect I guess
Click to expand...

Fair point, guess in this world the Americas is going be the large exception given how constitutional Monarchies are going to be even more normal.

Zulaq said:
Given how screwed over the Ottomans were by international debtors (The Ottoman Public Debt Administration was essentially a second non-government controlled bureaucracy which nearly strangled the empire) is it really a surprise they would want to cultivate their domestic banking sector to avoid a repeat, or even try their hand at international loans and the power they can grant themselves?
Click to expand...

I dont see it as a surprise.

But it will require lot of coordination between Economy and Foreign Affairs, besides other areas, and a solid financial structure capable of such loans.
Look into the Future [2] 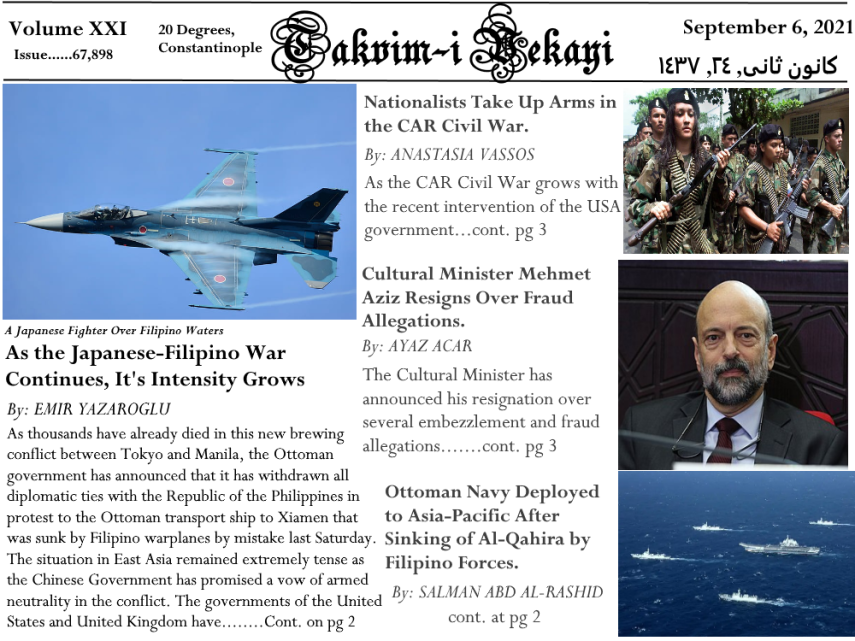 Wait, Japanese-Filipino War? Wha- Ho- Wh- Is the Philippines equal to that of Japan that they could wage war against Japan? Also, Oooof. Sinking a ship, even if it's accidental, wouldn't do a nation any favors.

Hmm, let's see...
[1] America intervening in another country's civil war. Nothing new there. Especially since it's practically right next door.
[2] A politician resigning over fraud allegations. Nothing new there.
[3] Japanese-Filipino War. Now there's something new. No American occupation in whatever version of WW2 in this timeline means no Article 9. Means war is still on the table as a means towards international relations.

Comparing the populations of the two countries, about the same. Japan has 20 million more but that's not an overwhelming advantage. Assuming the Philippines industrialized and has a comparable GDP and thus, higher military budget, and since we know the Americans are having trouble keeping them as a colony, so earlier independence.

Yeah, I'll say that it's plausible.

[4] Ottoman navy deploying in SEA. Even bigger divergence! So, they're a true blue water navy. Do they have a base in the region or are they renting out one from one of their allies in the region?

I guess in this time line, the balance of power has always been fair closer than this one, so the US and Philippines would have incentive to push their enemies to the ground than avoid the risk of WW3.

Though if I had to speculate, does the Philippines in this time line end up incorporating bits of the other Island nations? As in the Philippines, Malaysia, Indonesia had plans of one grand super state to unite against the various greater power and their colonial masters trying to come back dominate them, it fell through for a lot a reasons, religious and ethnic issues of who be a minority, concerns of who would hold ect.

Still the Philippines did try and take Sarawak from Malaysia in 1967 in a operation that failed horribly and caused the Moro insurgency to come back.
Given Indonesia was in massive civil war/colonial war against the Dutch for a couple of years, Malaysia here thanks to China being more powerful would crackdown on their Chinese minority far more and likely cause that insurgency to last longer.

I would not be surprised if the Philippines had a few years to annex a decent portion of both and states willing to back it for various reasons, such as creating a enemy for Japan that's loyal to them, countering China and just even creating a ''Christian'' Bulwark against the Ottomans being a nation in a region with lot of states in their cultural sphere and allied to them.

That the USA would try to intervene in CAR is expected.

1. I'm expecting America being a full on warmongering country than it is/was (idk) now.
2. Like every other politician it's not surprising.
3. I'm making a guess here that the Philippines are doing what America has been doing and they ruined their diplomatic relationship with the Ottomans so that won't end well for them in the long run.
4. What going on with modern Russia, are they still a monarchy or what it is otl.

also in case anyone is wondering, the native calendar of the ottomans is the rumi calendar (literally Roman Calendar), which continues ittl. So the Turko-Arab words in the top beside September 6 are the Rumi denotations