Osman Reborn; The Survival of Ottoman Democracy [An Ottoman TL set in the 1900s]

“The Legacy of the Italo-Ottoman War is one of incredulity in Italy, and one that of pride in the Ottoman Empire, and not without reason. The war did a lot to restore the pride of its citizens in the Ottoman Empire, and the people were once again proud to be called ‘Ottoman’ again. Ethnic boundaries like Turk, Greek, Albanian, Bulgarian, and Arab took a backseat in the war, and again for good reason.

Italy’s claim to Tripolitania and Cyrenaica was not exactly a new thing or new development. They dated as far back as the Ottoman Empire’s defeat to the Russians in the Russo-Turkish War of 1877-78 and the subsequent discussions between the Great Powers during the Congress of Berlin, in which France were given Tunisia and Cyprus respectively. Italy had managed to weasel through a claim in the region, even though the Congress did not allow Italy to take the region in 1878. In 1887, the government of the Italian government exchanged a bunch of secret notes with the government of Great Britain in which the Italian government provided support to eh British occupation of Egypt, in exchange for British support of an Italian Libya sometime in the future. In 1902, the Italian and French governments set aside their historical rivalry by signing a secret treaty between Italian Foreign Minister Giulio Prinetti and French Ambassador Camille Barrere. The secret treaty signed by Italy and France most significantly allowed Italy to have full freedom of intervention in Tripolitania and Cyrenaica.

Prinetti, the architect of the 1902 secret Franco-Italian agreement. ​
In 1909, Tsar Nicholas II and King Victor Emmanuel III signed the Racconigi Bargain in which the Russian government acknowledged the Italian claims to the North African region.

Despite these developments however, the Italian government made no real move against the Ottoman Empire other than creating a Libyan section in the Italian Colonial Office in 1908. However the Agadir Crisis in April 1911 saw the French use military action in Morocco turning the historical state into a French protectorate. At this point, the Italian nationalists were baying for Italian expansionism and popular papers like L’Idea Nazionale accompanied by nationalists like Enrico Corradini lobbied hard for the idea of an expanded Italian Colonial Empire. By this point, the Italian leadership decided that it could safely accede to public demands to a colonial project. The Triple Entente were highly supportive. British Foreign Secretary, Sir Edward Grey assured the Italian government that British assistance to the Ottoman government would not be in the cards, and thus by extension, Egyptian assistance to the Ottoman Empire was also out of the cards. The French government secretly contacted the Italian government, stating that they would not interfere in an Italian colonial project in Libya, and the Russian government meanwhile urged Italy to act ‘prompt and resolute manner’. 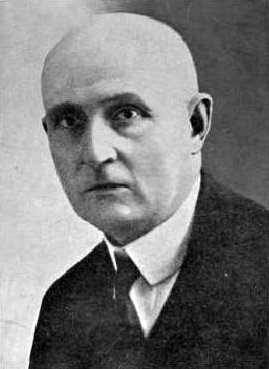 Enrico Corradini, an outspoken Italian ultranationalist. ​
Giolitti and Italian Foreign Minister Antonino Paterno Castello agreed on 14th September, 1911 to launch a military campaign before the German and Austrian governments were aware of the fact. At that time the German government was locked in a diplomatic conflict with the British government to gain diplomatic influence in the Ottoman Empire, and was trying to thus mediate between Rome and Constantinople whilst the Austrian government wished to keep the Eastern Question down, noting their own large Slavic population within the Dual Monarchy. Austrian Foreign Minister Alois Lexa von Aehrenthal also warned the Italian government that any intervention in Libya would upset the fragile European Balance of Power.

Meanwhile within the Ottoman Empire, the restoration of Ottoman Democracy in 1908 following the 1908 Macedonian Uprising and the infamous IMRO involvement had been a tenuous affair. Democracy was restored in the nation and the monarchy was made into a Prussian-constitutionalist style constitutional monarchy, wherein the monarch still had a lot of soft influence, however was no longer an absolute monarchy. However Ottoman Democracy was trying for the nation. In 1909 a counter coup almost restored absolutist rule in the nation and in the aftermath of the countercoup Abdul Hamid II was dethroned and his relative, ascended to the Osman throne as Sultan and caliph Mehmed V of the Ottoman Empire. Mehmed V by contrast to his relative, was relatively fine with remaining a constitutional monarch and supported the Chamber of Deputies and the Ottoman Parliament. 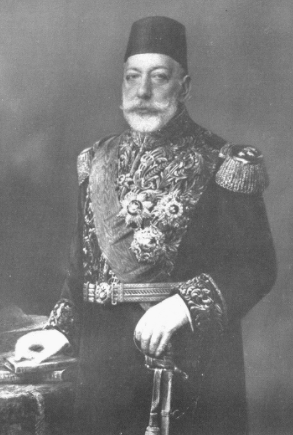 Sultan Mehmed V of the Ottoman Empire. ​
However within the polities of the Ottoman Empire itself, there was discontent. The Committee of Union and Progress (CUP) often clashed with the Ottoman Democratic Party led by Ibrahim Temo and the Liberal Union led by Prince Sabbahadin. The Liberal Union had been temporarily disbanded in 1909 following the 1909 coup attempt, however they were brought back in by successive Grand Viziers.

The two years under democratic rule, no matter how tenuous it had been, was also fruitful for the empire. Railroads were being laid down, literacy had gone up, and the economy of the nation was starting to recover at a first rate as well, and the country was truly leaving behind the vestiges of feudalism and turning into a modern Empire-state. The economy grew by 7.1% in 1909 and 8.2% in 1910 showing astounding progress, and the OPDA or the Ottoman Public Debt Administration showed a lowering in Ottoman debt by 13% in the two years, showing remarkable economic progress.

When the Libyan Question started to rise, the Ottoman Empire’s government was led by Grand Vizier Ibrahim Hakki Pasha. Hakki Pasha was a mediocre Grand Vizier all things considered, however one of his major contributions to the Empire was in the fact that on September 15, 1911 he opened the Chamber of Deputies asking the Chamber for authorization for military supplies and 4 divisions to be shipped over to Libya in case of a ‘state of conflict and intervention’ between the ‘Ottoman Empire’ and ‘Italian Kingdom’. [1] 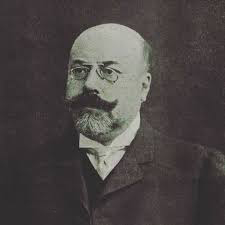 Grand Vizier Ibrahim Hakki Pasha. ​
The Chamber of Deputies was bitterly divided over this issue. The CUP was reluctant to do the following measures given by Hakki Pasha, and the Liberal Party and Democratic Party agitated for the government to take measures to defend Libya. It was in the end the votes of the Libyan deputies in the Chamber (14 out of the 60 Arab seats in the Chamber) that turned the vote in favor of preparations to take place. The Chamber voted 154-130 in favor of shipping 4 divisions to Libya by September 27th, and readying the Ottoman Armed Forces in the region, as well as the Libyan irregulars in the area.

That evening, the first troops started to board transport ships in Izmir, Constantinople and Mersin. 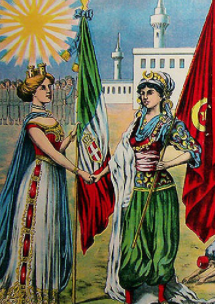 A nationalistic propaganda poster after the declaration of war showing the Italian lady as more dignified and better dressed than the Turkish one ​
Prologue of The War of Sands: A History of Ottoman Libya by Sir Douglass Howe, published in The University of London in 1988.

[1] – this motion was raised in the Chamber otl, however political bickering got in the way of the proposal. This of course does not happen ittl.

Just how many timeline you have currently ? I honestly have lost count

Lemonfish said:
Just how many timeline you have currently ? I honestly have lost count

It's time to give the ottoman empire some love!

Italians being beaten back by the Ottomans...
Carlo Caneva: Mama mia! This is not a spicy meme!

Panzerlied said:
Italians being beaten back by the Ottomans...
Carlo Caneva: Mama mia! This is not a spicy meme!
Click to expand...

I am just hopping that Armenians wont suffer.

Avoid WW1 or a defeat in field early on and it will likely be avoided.

If the Italian are decisively beaten back then no Balkan war for some time and Franz Ferdinand might not get murdered because less national fervor but it might still be by frustration . Delayed WW1 ?

Ottoman Empire being a bit more respected than in OTL 1914

It doesn't necessarily avoid FF assassination but Serbia might be less enthousiast of a war. It depends on Austria-Hungary whether the start of the war is like OTL. If it is, the Entente will try to get the Ottoman Empire to join and support Serbia and open a new front in Bosnia.

They won't. Before the 1913 coup they did support the ottomans.

Osman Aga said:
Avoid WW1 or a defeat in field early on and it will likely be avoided.
Click to expand...

Abd ar-Rahman II said:
If the Italian are decisively beaten back then no Balkan war for some time and Franz Ferdinand might not get murdered because less national fervor but it might still be by frustration . Delayed WW1 ?
Click to expand...

Ottoman Empire being a bit more respected than in OTL 1914

It doesn't necessarily avoid FF assassination but Serbia might be less enthousiast of a war. It depends on Austria-Hungary whether the start of the war is like OTL. If it is, the Entente will try to get the Ottoman Empire to join and support Serbia and open a new front in Bosnia.
Click to expand...

Death's Little Helper said:
You haven't made a timeline yet that I haven't enjoyed so I look forward to seeing what happens here
Click to expand...

Well, this should be interesting! Look forward to where you take this!
Edit: Will the Armenian Genocide happen ITTL? One hopes not...

Kaiser Wilhelm the Tenth said:
Well, this should be interesting! Look forward to where you take this!
Edit: Will the Armenian Genocide happen ITTL? One hopes not...
Click to expand...

It won't happen. Before the 1913 couo that returned the empire into a dictatorship, the Armenians supported the ottoman empire.
Threadmarks
Reader mode
You must log in or register to reply here.
Top
Share:
Share
Top