So I saw that someone brought the idea of an optimal borders survey back recently, so I thought I'd repost one I'd made a few years ago. With independent New England being more popular on the board now than it was when I first posted it I thought it'd be a good time to post it. 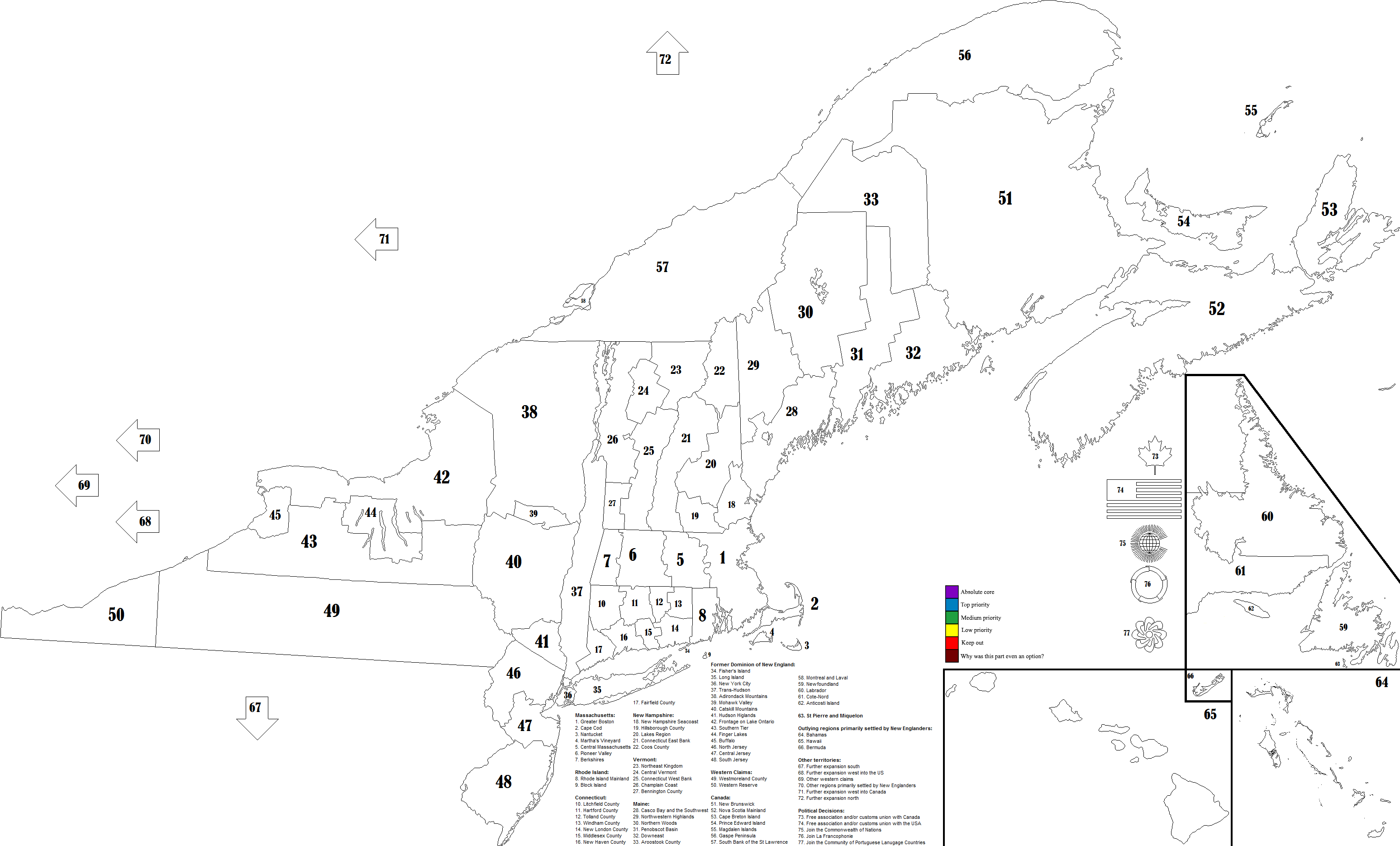 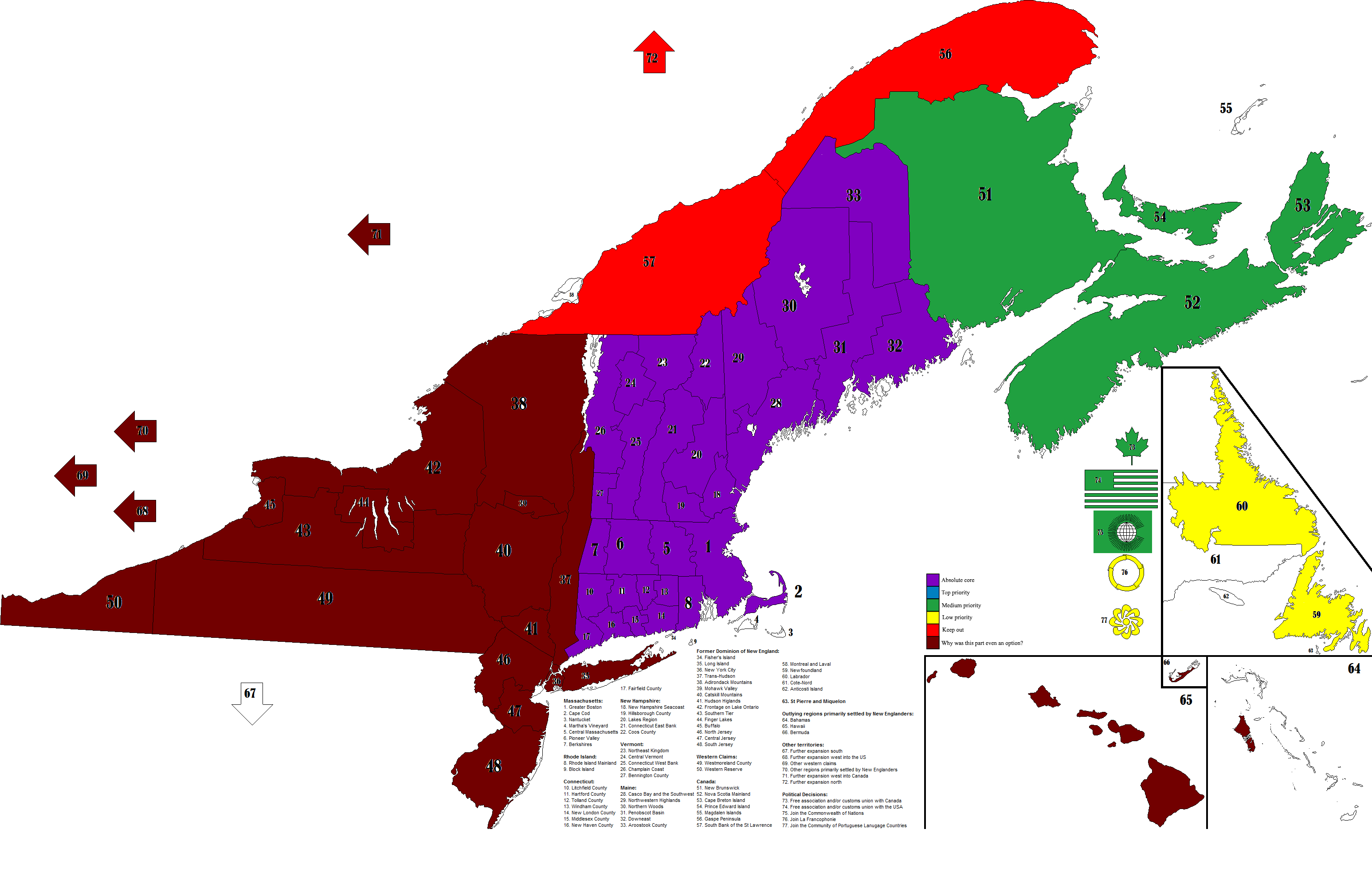 edited by someone not even from that region

Just to be clear as to how I interpret the priority levels, I see top priority as what territory New England should, but doesn't HAVE to have, or rather, important parts of New England that it could have ended up without. The green I see as reasonable expansion of the core territory, yellow as areas that could be integrated but nobody would really push to have them included in New England and the "keep out", I see as areas NE could have that would give it a hard time. 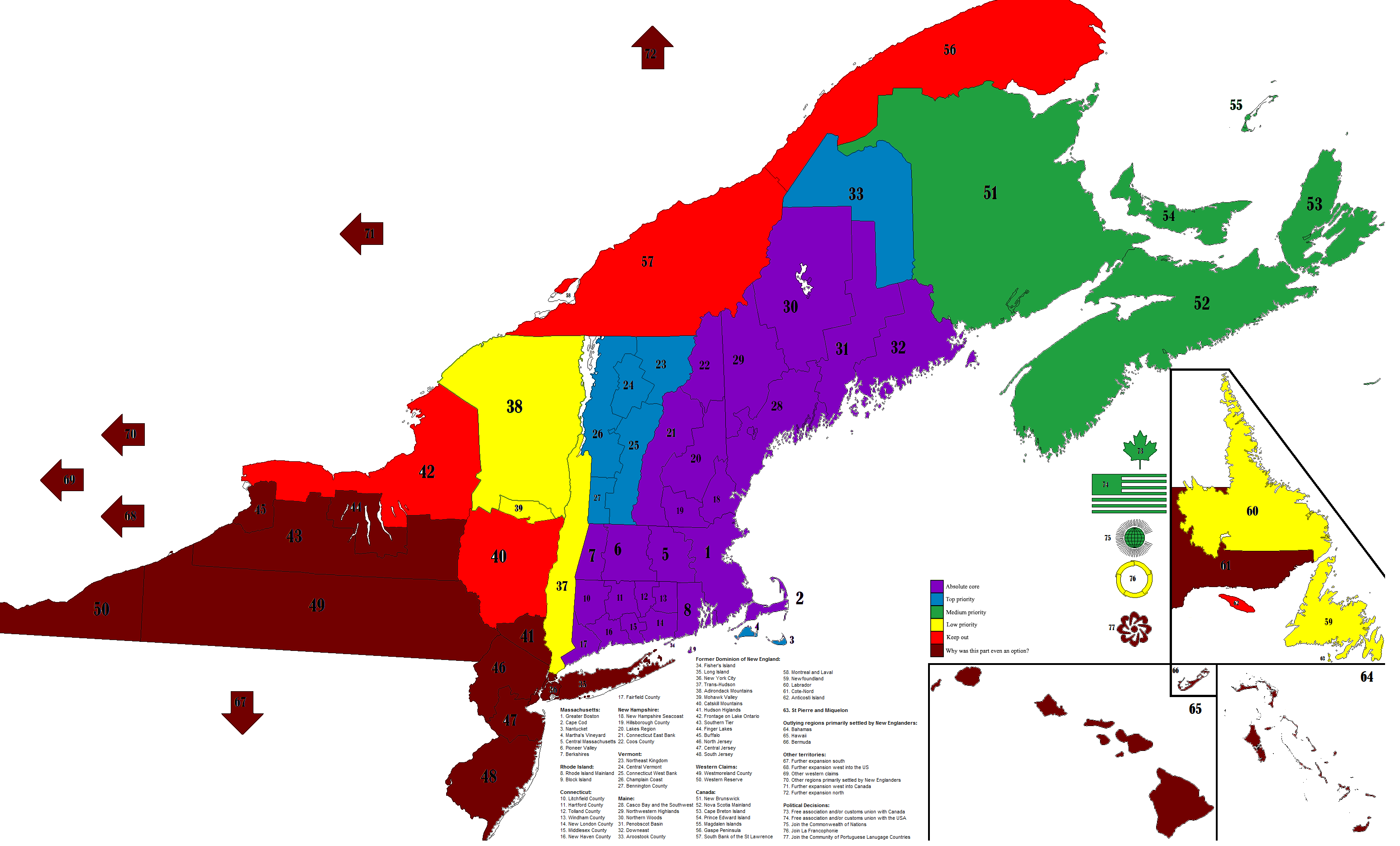 I'm not from NE either though, so the real experts may disagree. 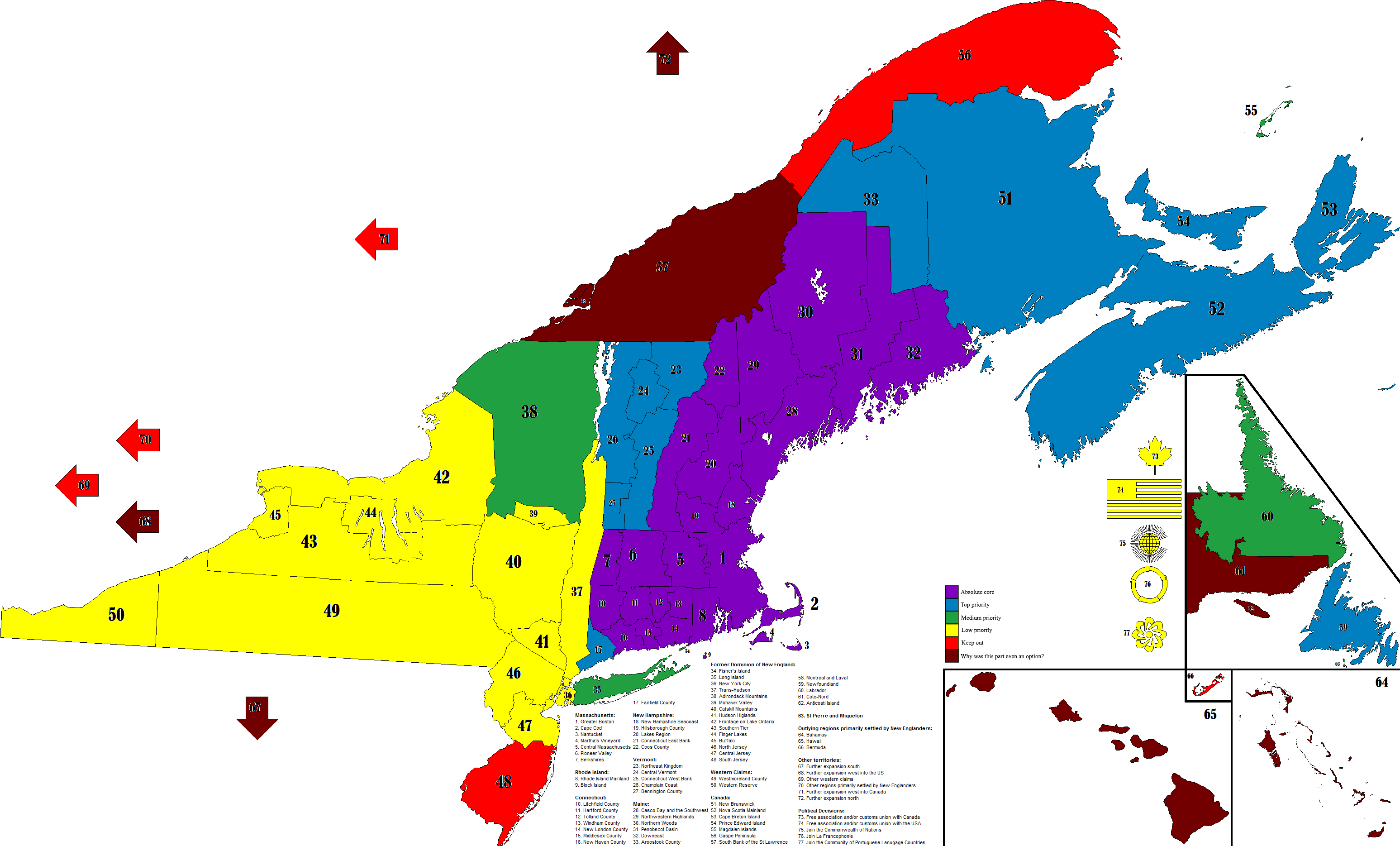 Here's my estimate for it. Might elaborate on that later.

My rationale behind some of the choices are these:
1) Fairfield County would look great with New York, but it is New Englander in nature, hence its status as top priority. A similar situation exists with Vermont, though there's also the Green Mountain Republic to consider.
2) I'm not a big fan of the divisions you put in for New Jersey and New York, which led to me making most of it low priority. Also if there'd be one additional degree of priority, I'd make Upstate New York and Connecticut's western claims in Pennsylvania and Ohio more of a priority than the Lower Hudson Valley (which sadly here is partially covered by 37 as well as 41), NYC, and northern New Jersey.
3) Speaking of New Jersey: Southern NJ is rightful Pennsylvania clay.
4) Cultural unions are nice but not really a priority, and free association isn't that desireable to me, given that I mostly associate that status with tiny Pacific Islander states...
5) A good New England should control a few rocks in the Atlantic and Bermuda fits the closest, though personally I am a big fan of adding stuff like Trindade & Martin Vaz or the Danish/American Virgin Islands to New England instead.
Last edited: Thursday at 4:07 AM 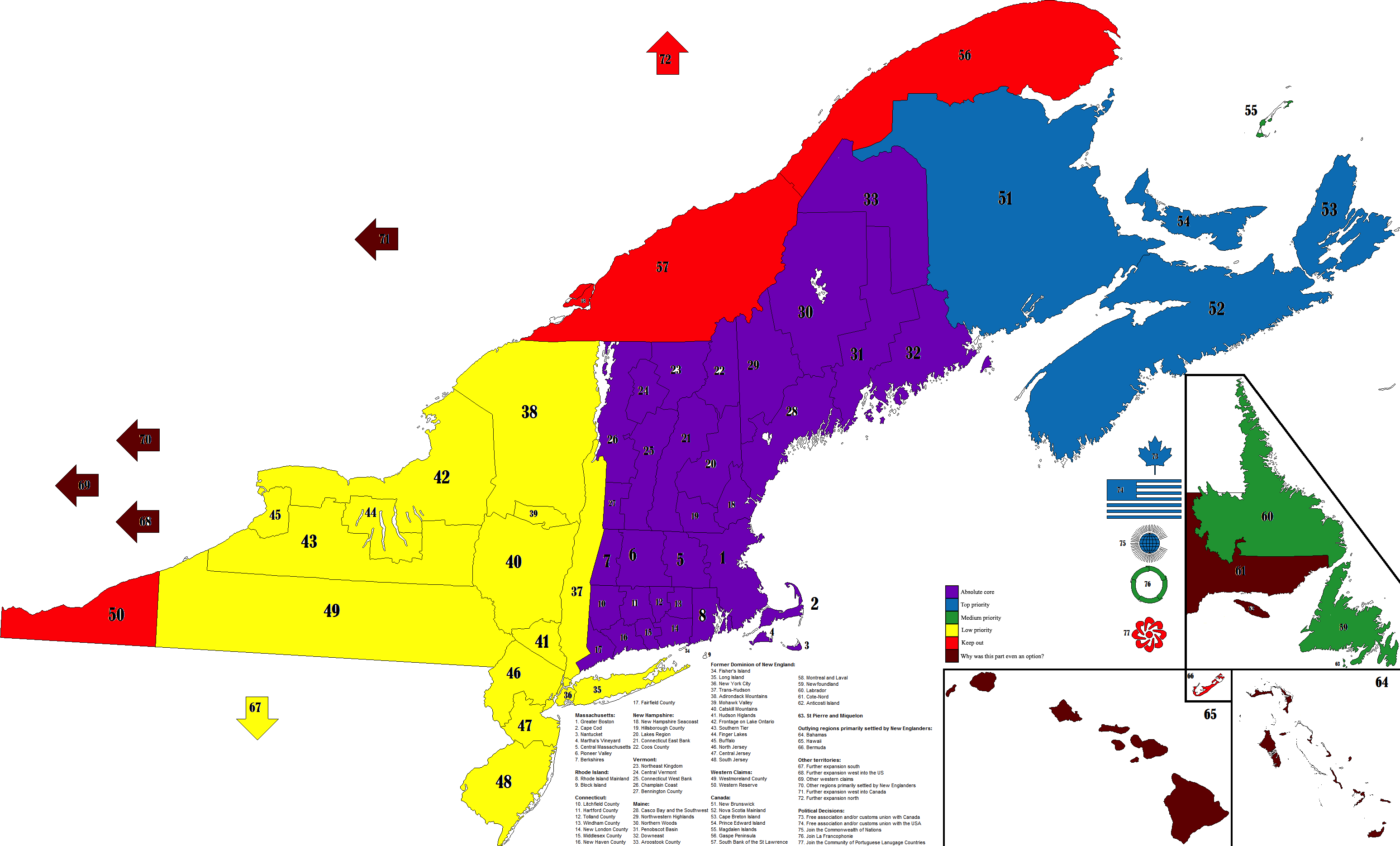 When I filled in 67, I had in mind the rest of Pennsylvania and possibly Delaware. 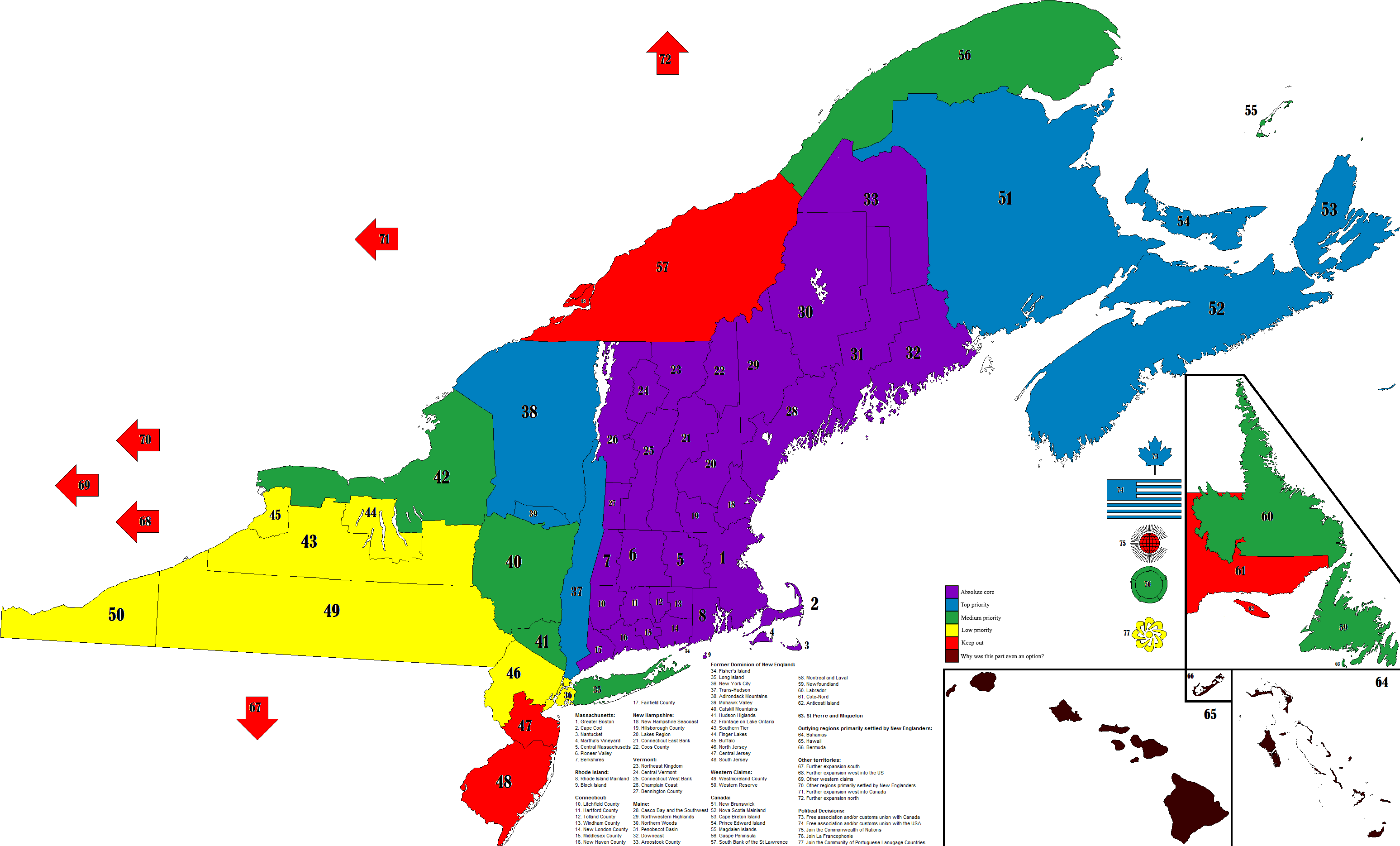 as a new englander, i believe it is our duty to subjugate new york.

ST15RM said:
View attachment 533116
as a new englander, i believe it is our duty to subjugate new york.
Click to expand...

Also western reserve because they are rightfuly New English, Cape Breton because they didn't fight for Louisburg for nothing,
Last edited: Wednesday at 11:47 AM 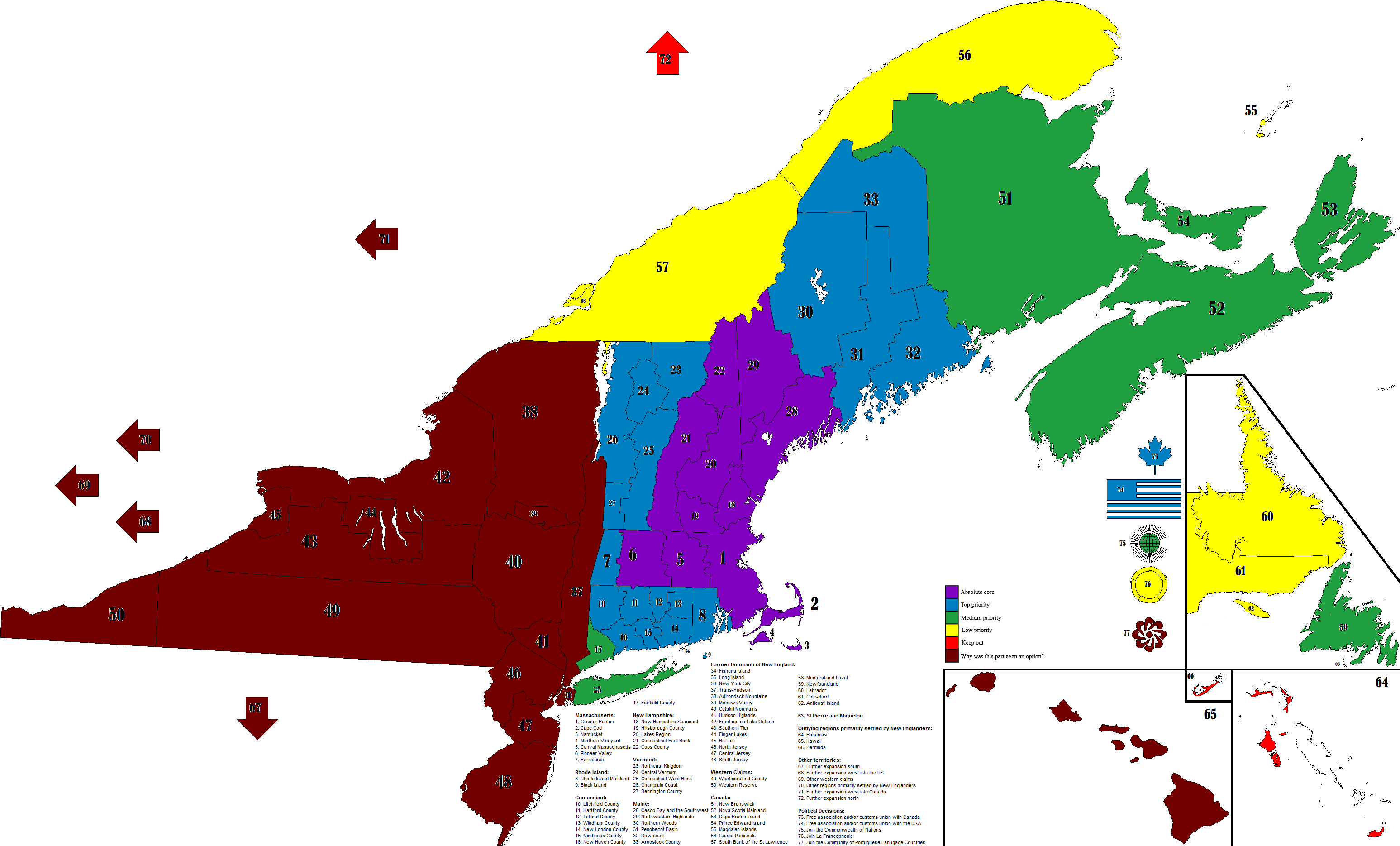 As a New Yorker, I must say that New England can be smaller 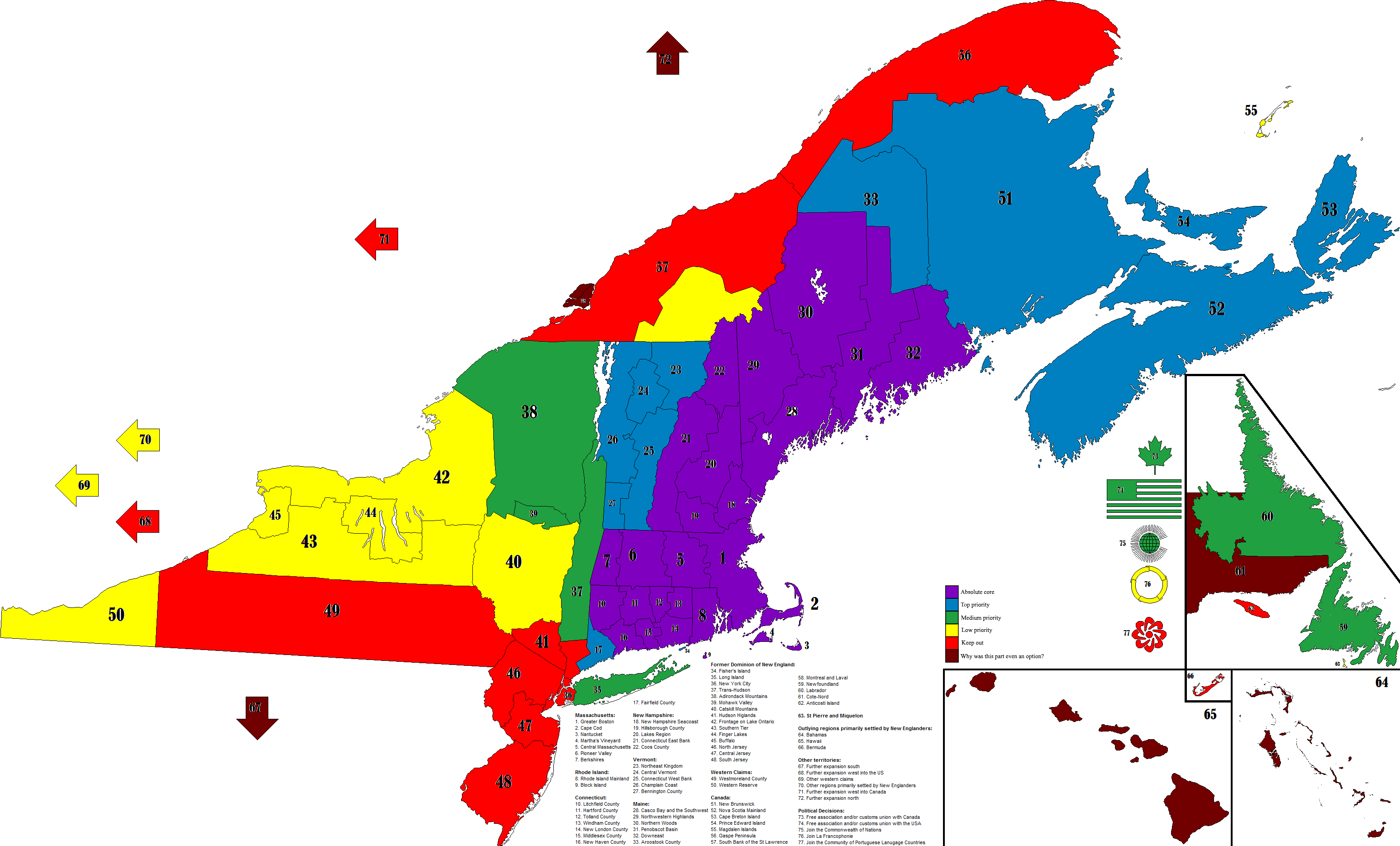 I'd say that an independent New England would at least contain all of the six New England states' territory, but there's a small chance that Vermont goes off on its own, Fairfield County goes with New York, or the French-speaking communities in Maine join their linguistic compatriots in Canada so they're only labeled as top priority. The only border changes I've made are splitting the Eastern Townships from the rest of southern Quebec and splitting Westchester County from the Trans-Hudson region.

I am not a New Englander. Please note, all the unlabelled areas are either keep out or 'why was this an option'
<3

The six states. Maybe NY and NJ. Nothing more.

This is where I'm at: the core of the six New England states, with potential expansion into the Maritimes, and at a big stretch New York City and the Hudson Valley. My reasoning on the latter is that you can make a pretty good argument for the NY/Boston rivalry being an internal one (and I don't just mean on sports; yes, NYC easily wins on economics, but there is more to it than that imo). Culturally and economically, the Maritimes share a lot with N.E and could fit well. One caveat I would add: if NYC is considered part of New England, the Commonwealth/Free Association with Canada wins out for me, but if it's pulled out, it's probably in the US' favor since it's bound to be an economic anchor regardless. 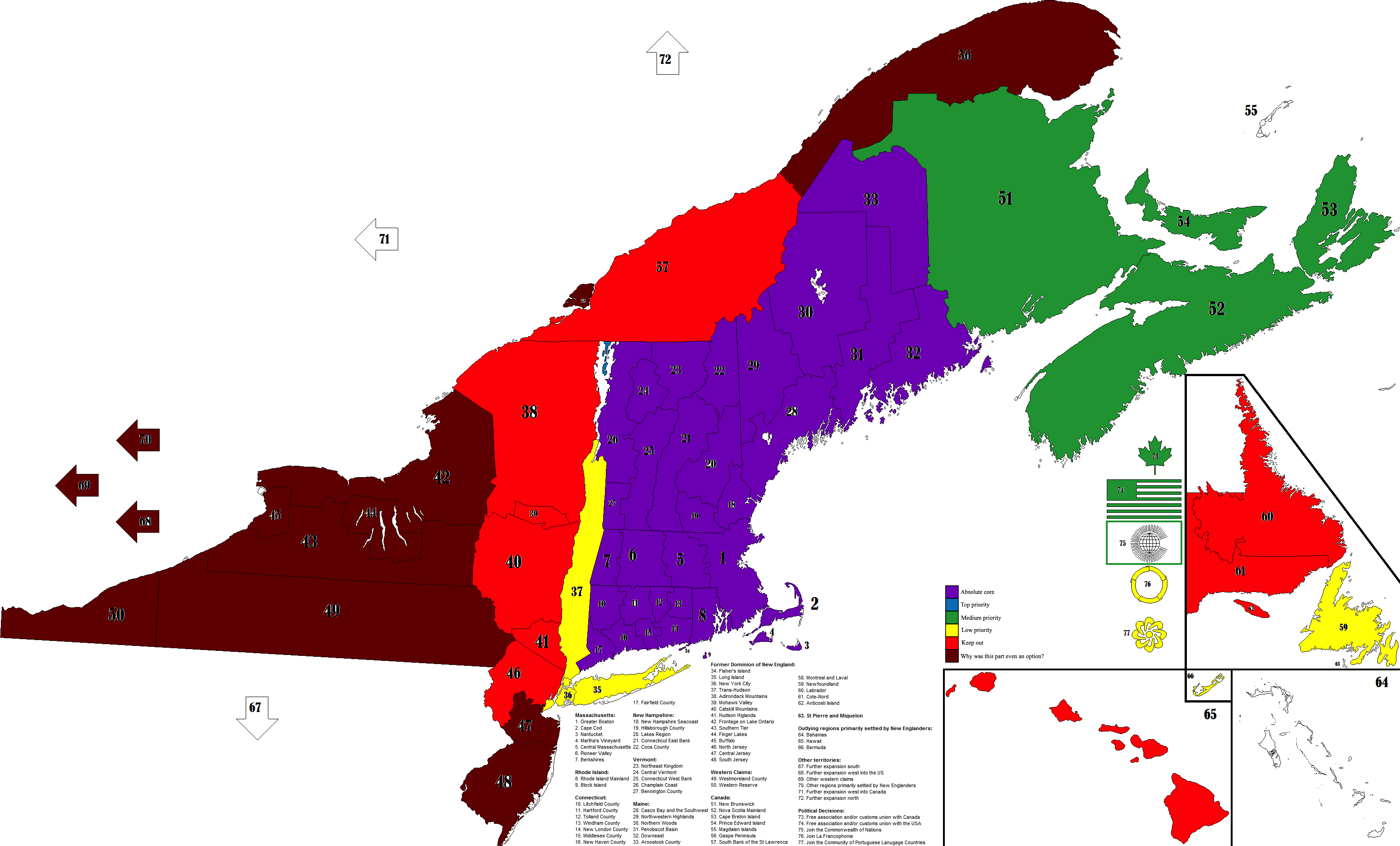 (and now that I look at this map, @VT45 , I think it may have been the source for the one I posted earlier in the blank map thread where someone had super-imposed county borders. So I'll credit you from here on out!)
You must log in or register to reply here.
Top
Top