Banned
¨Mr. President, we are about to begin.¨
-aide to President George W. Bush, shortly before the inauguration, 1/20/2009

¨Oh my god, something blew up!¨
-spectator near the Washington Monument, Inauguration Day

¨We have received word that the designated survivor of the Inauguration Day events, Defense Secretary Robert Gates, has just been sworn in as the 45th President of the United States.¨
- FOX News live broadcast, Inauguration Day 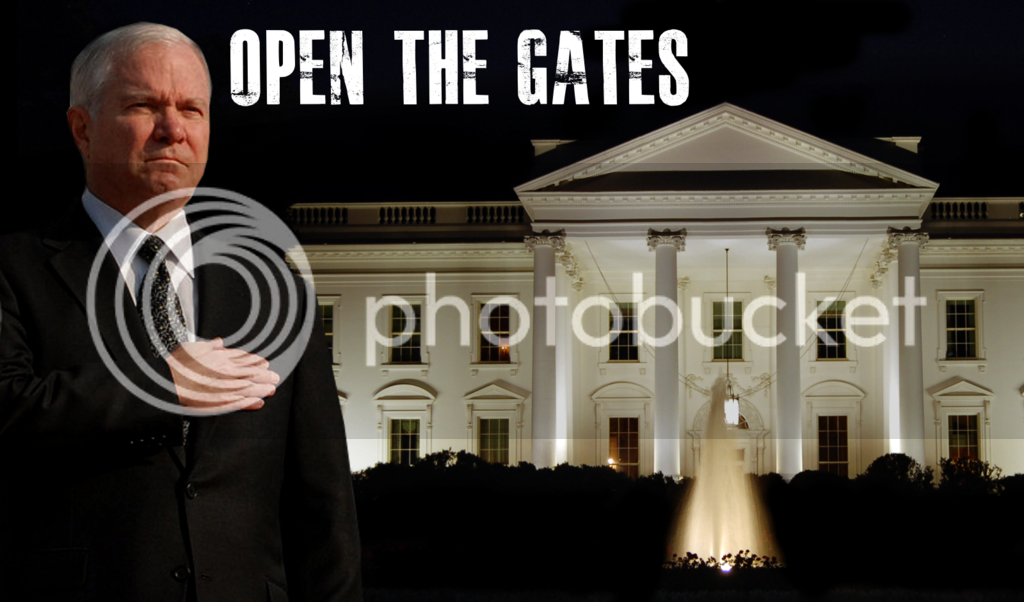 *thanks to @SargentHawk for the title card

Donor
Monthly Donor
This sounds interesting. I will be watching.

Banned
Mr Gates please put your hands on the bible and repeat after me.

(OOC can this be a wikibox timeline?)

Jaguars4life said:
Mr Gates please put your hands on the bible and repeat after me.

(OOC can this be a wikibox timeline?)
Click to expand...

I can't post wikiboxes, but if people are willing to make wikiboxes for this TL then I endorse it.

Accurateworldwar said:
I can't post wikiboxes, but if people are willing to make wikiboxes for this TL then I endorse it.
Click to expand...

Love for someone to do so

So an AH take of "Designated Survivor?" Now to see how the new Prez will handle the fallout, both real and fallout.

Banned
"When what became known as the Inauguration Day Attacks occurred, the designated survivor, Defense Secretary Robert Gates, was sworn into office at 12:15pm, meaning that the first African American President, Barack Obama, tragically holds the record for the shortest Presidency in history, at an estimated 11 minutes and 22 seconds."
-The Big Book of Trivia and Unknown Factoids, (pub.2011)

"When Robert Gates was sworn into office, he faced a massive crisis. Many members of Congress attended the inauguration, and as such, most were dead. Every former President and Vice President were also killed, along with several celebrities and the Governor of California, Arnold Schwarzenegger. In addition, thousands of civilians were dead or injured, with fallout from the dirty bomb expected to harm potentially thousands more. With this in mind, President Gates announced martial law for the D.C. area, in order to evacuate people within the expected fallout zone. The governors of Maryland and Virginia made similar arrangements, declaring a state of emergency for areas near the capital."
-The Unexpected Presidency of Robert Gates, by William Castle, (pub. 2019)
Last edited: Sep 25, 2016

^Why doesn't he have a veep?

Banned
The veep hasn't been selected yet.

Banned
Want to see the Schwarzenegger and Obama wikiboxes

Accurateworldwar said:
The veep hasn't been selected yet.
Click to expand...

Hmm, dirty bomb.... Wonder who's behind this?

Accurateworldwar said:
The veep hasn't been selected yet.
Click to expand...

Ah, all right then, I thought it was made from a 2016 viewpoint or so.

Gone Fishin'
CNN knows immediately that it is a dirty bomb? Did someone built a device with manure? Or am I mistaken and think you mean a radiological device? Because if it's the latter then I really think that the first post of your TL, which is where you gain readers, if you want those, should have a little bit more plausibility than that.

Jaguars4life said:
Want to see the Schwarzenegger and Obama wikiboxes
Click to expand...

You should learn how to make them.

Banned
How do I?

PM and I'll give you a little tutorial.

Jaguars4life said:
Want to see the Schwarzenegger and Obama wikiboxes
Click to expand...

Those would be pretty basic. Just changing the dates of Obama's Presidency to get rid of "incumbent" and giving him a death date with the age he died at. Arnie's would be similar, except the end of his term as Governor of CA would be Jan. 20, 2009 (same as his death) and there would be a line saying "Succeeded by:" whoever the Lt. Gov. or next eligible person was at the time.

Banned
"On this day, we gather because we have chosen hope over fear,unity of purpose over conflict and discord. On this day, we come to proclaim an end to the petty grievances and false promises,the recriminations and worn-out dogmas that for far too long have strangled our politics. We remain a young nation. But in the words of Scripture, the time has come to set aside childishthings. The time has come to reaffirm our enduring spirit; to choose our better history; to carry forward that precious gift, thatnoble idea passed on from generation to generation: the God-given promise that all are equal, all are free, and all deserve chance to pursue their full measure of happiness."
-The last words of President Barack Obama, Inauguration Day.

"James Cummings, the perpetrator of the attacks, lives in the city of Bangor, Maine. A white supremacist, he was reported as unhappy about the election of Barack Obama."
-CNN, Inauguration Day.

"Sadly, we must report that the original estimated deaths, at 2,430 people, was underestimated. We have confirmed that 4,224 people are now dead from the Inauguration Day attacks. There are also over 2,900 people injured or in the hospital at this moment."
-MSNBC, 1/22/2009

"These attacks were committed by a man who saw only hatred towards our President, and we will not allow the actions of this man to taint the spirit of our country. We are strong, and we will go on."
-President Robert Gates in an address to the nation, 1/21/2009
Last edited: Oct 18, 2016

Banned
PRES. GATES: So, down to buisness. We have most of Congress and the Supreme Court gone. We also don't have a Vice President. What are we going to do?

ACT. CHIEF OF STAFF MONA SUTPHEN: Mr. President, replacing the deceased members of Congress will probably be easiest, as the governors of those respective states will appoint their replacements. As for the Supreme Court, we have assembled a list of justices that you may find suitable for the job. Same goes for finding a new Vice President.

PRES. GATES: Out of the question. Choosing him would be a slap in the face to the people who voted against him in November.

ACT. CHIEF SUTPHEN: Alright, then, Mr. President. Next we have former Secretary of State Colin Powell. We selected him based on his bipartisanship ability and his previous experience around the White House.

PRES. GATES: Bipartisanship is a must, especially considering the people voted a Democrat and got a Republican under the most tragic of circumstances. But, does Powell have any interest in the position?

ACT. CHIEF SUTPHEN: If Powell is asked to hold the Vice Presidency, I believe he would do so, considering our extraordinary position.

PRES. GATES: Okay. What are our other options, if Powell decides not to accept?

ACT. CHIEF SUTPHEN: We also have Thomas Kean, former Chairman of the 9/11 Commission and former Governor of New Jersey. His experience dealing with another national tragedy as well as his executive experience could prove useful in the White House.

ACT. CHIEF SUTPHEN: Would you like me to go on?

PRES. GATES: No, I think I have made up my mind on who will be Vice President. Now, can you share with me the list of possible Supreme Court justices?