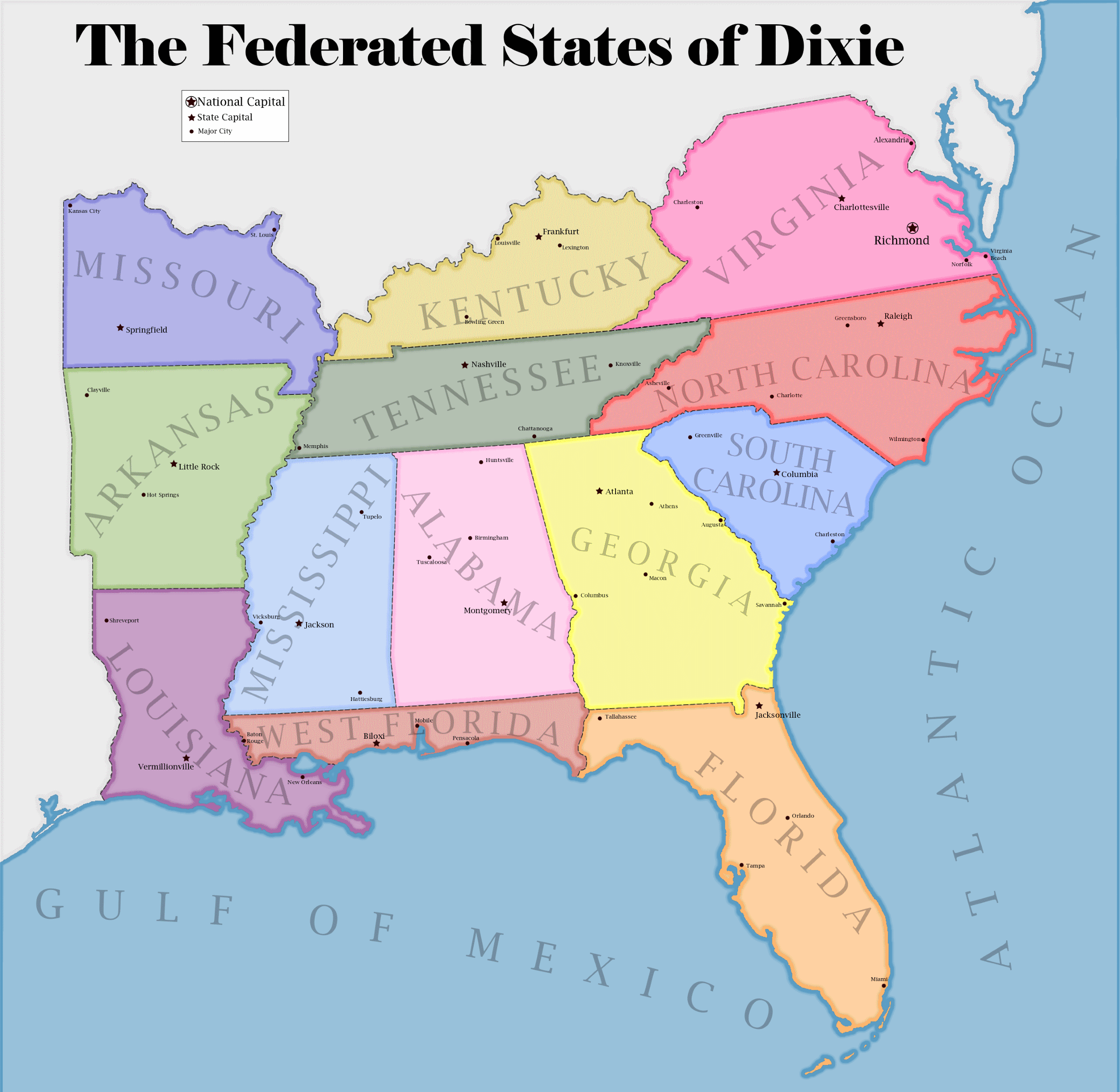 For the backstory: After the French-and-Indian War, Great Britain takes possession of France's territories west of the Mississippi (which are much more populated than in OTL) instead of Spain. GBR then reorganizes the entirety of their North American colonies into North and South with the Ohio River and the Maxon-Dixon being the main demarcation lines.

The American Revolution happens but is put down eventually as the North and the South are reluctant to join forces. The French Revolution still takes place and Napoleon still comes to power. During the Napoleonic Wars, the stress put on the colonies by the British causes the rebellion to start anew (largely spurned on the the sizable French minorities in both the North and the South), but it is put down in the North. In the South however the rebels have much more success and are eventually able to win their independence under General Andrew Jackson.

Now the South is an independent presidential republic while the North (which includes most of modern day Canada) forms the Commonwealth of America.

I will mostly be posting maps, wikiboxes and pages, and graphics that I make for this timeline. I would greatly appreciate suggestions and contributions if people wish to make them.

I've linked all the previous posts I've made for this TL that I haven't altered since. 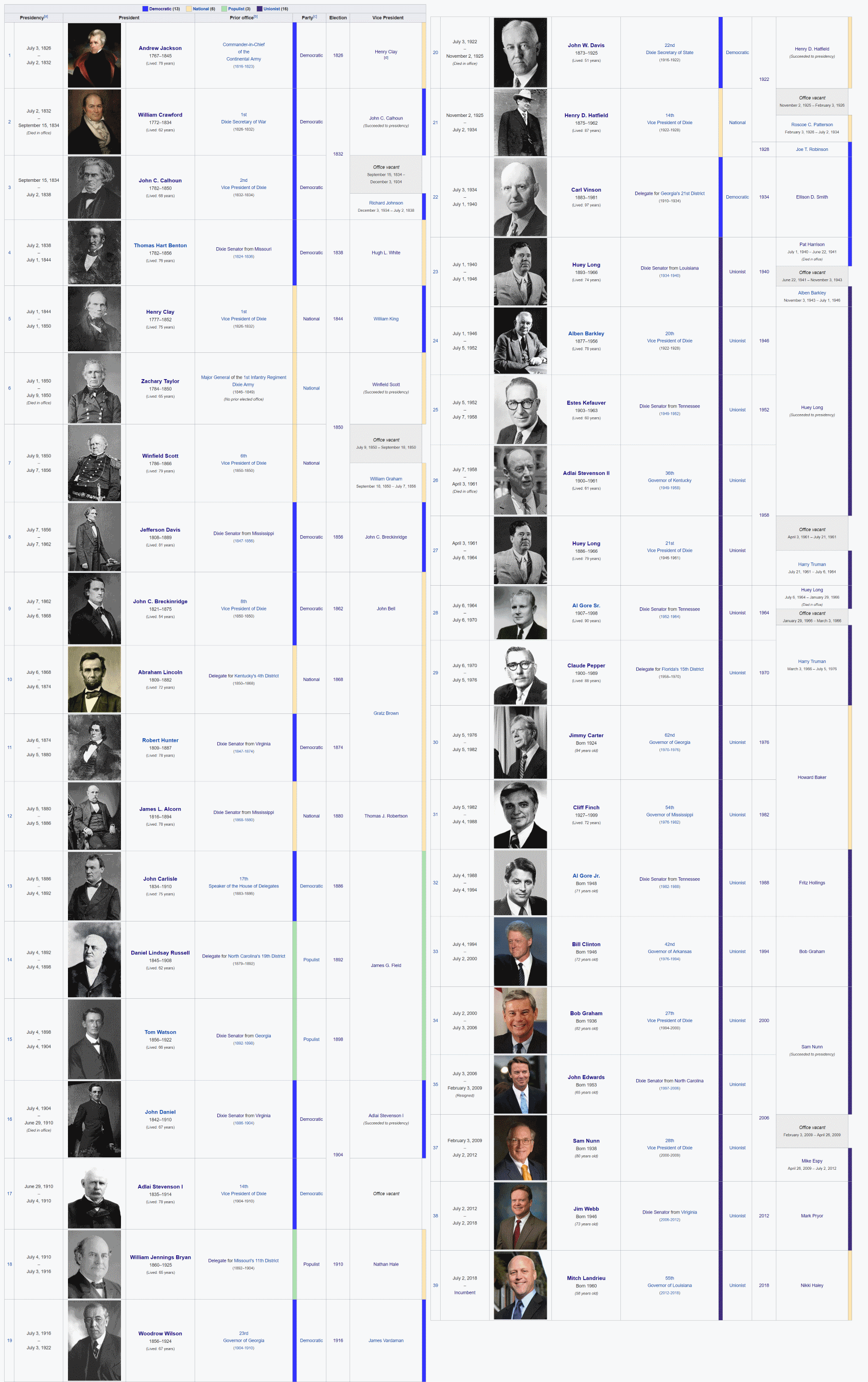 The 2018 presidential election saw Unionist candidate, Louisiana governor Mitch Landrieu defeating National candidate, Florida Senator Marco Rubio in a larger than expected margin. This would be the 14th consecutive presidential election won by the Unionist Party and the election of the first Francophone president. However, the vice-presidential election was much less good for the Unionists with Virginia Senator Tim Kaine unexpectedly losing to South Carolina Governor Nikki Haley. Haley would be the first National Vice-President elected since Howard Baker in 1982. Kaine would later be appointed Secretary of State by now-president Landrieu. 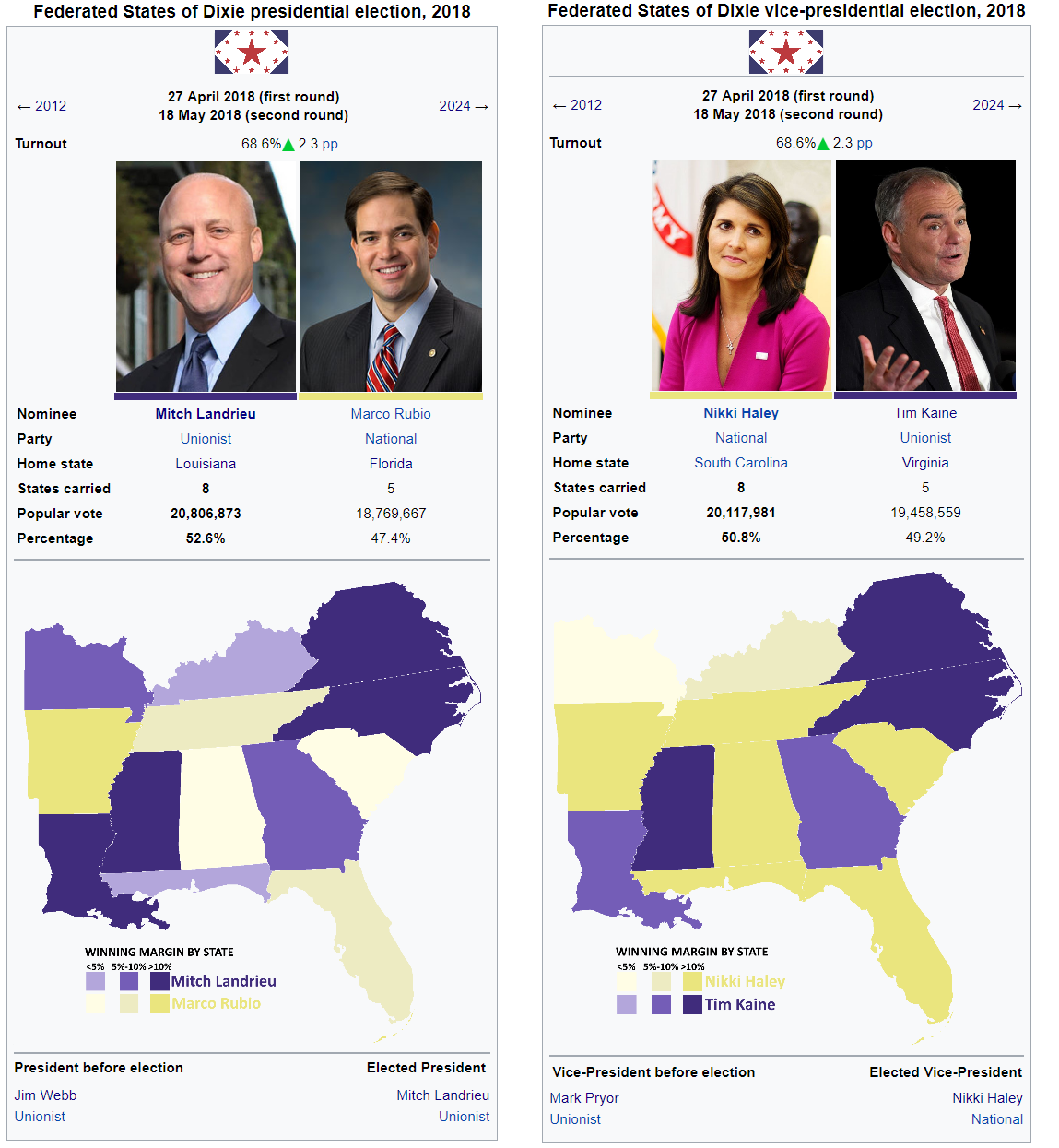 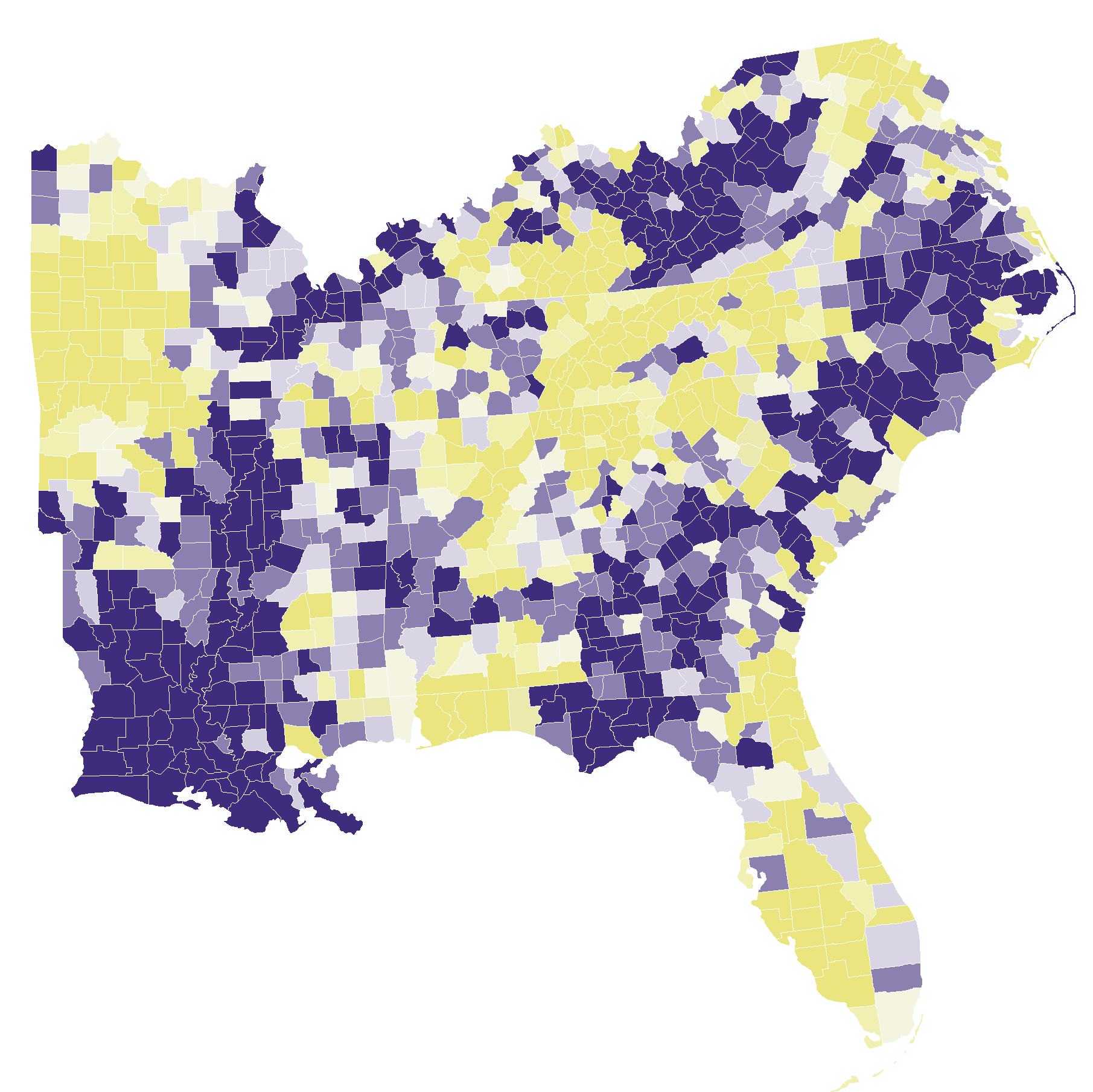 In the 2018 Congressional Elections, the Unionists managed to gain back the absolute majorities they held prior to the 2015 midterms and ending the coalitions they formed with the Social Democratic Party in the House and the Parti La Louisiane in the Senate. 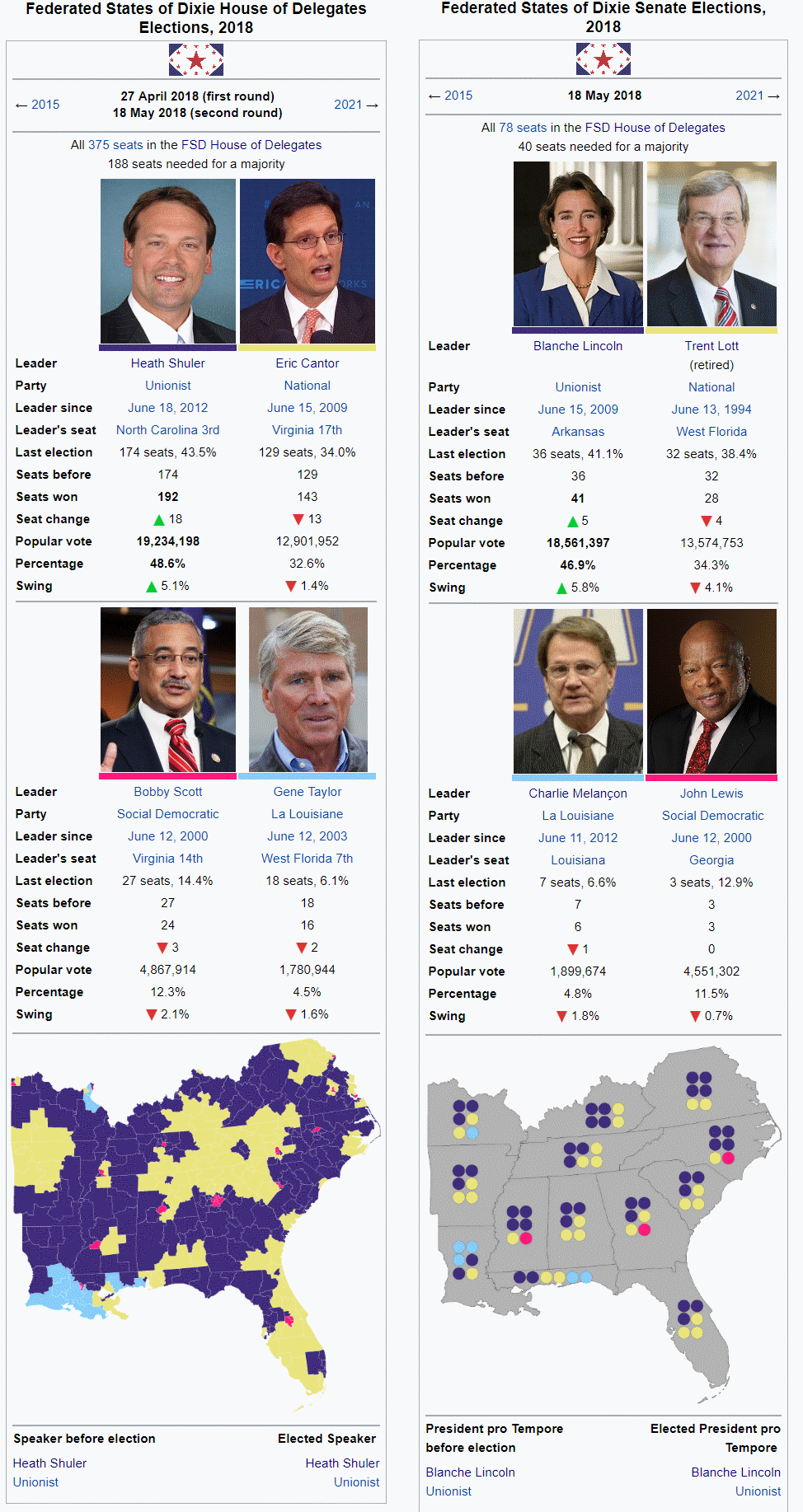 Members of the 2018 House of Delegates

Members of the 2018 House of Delegates

House of Delegates by Party 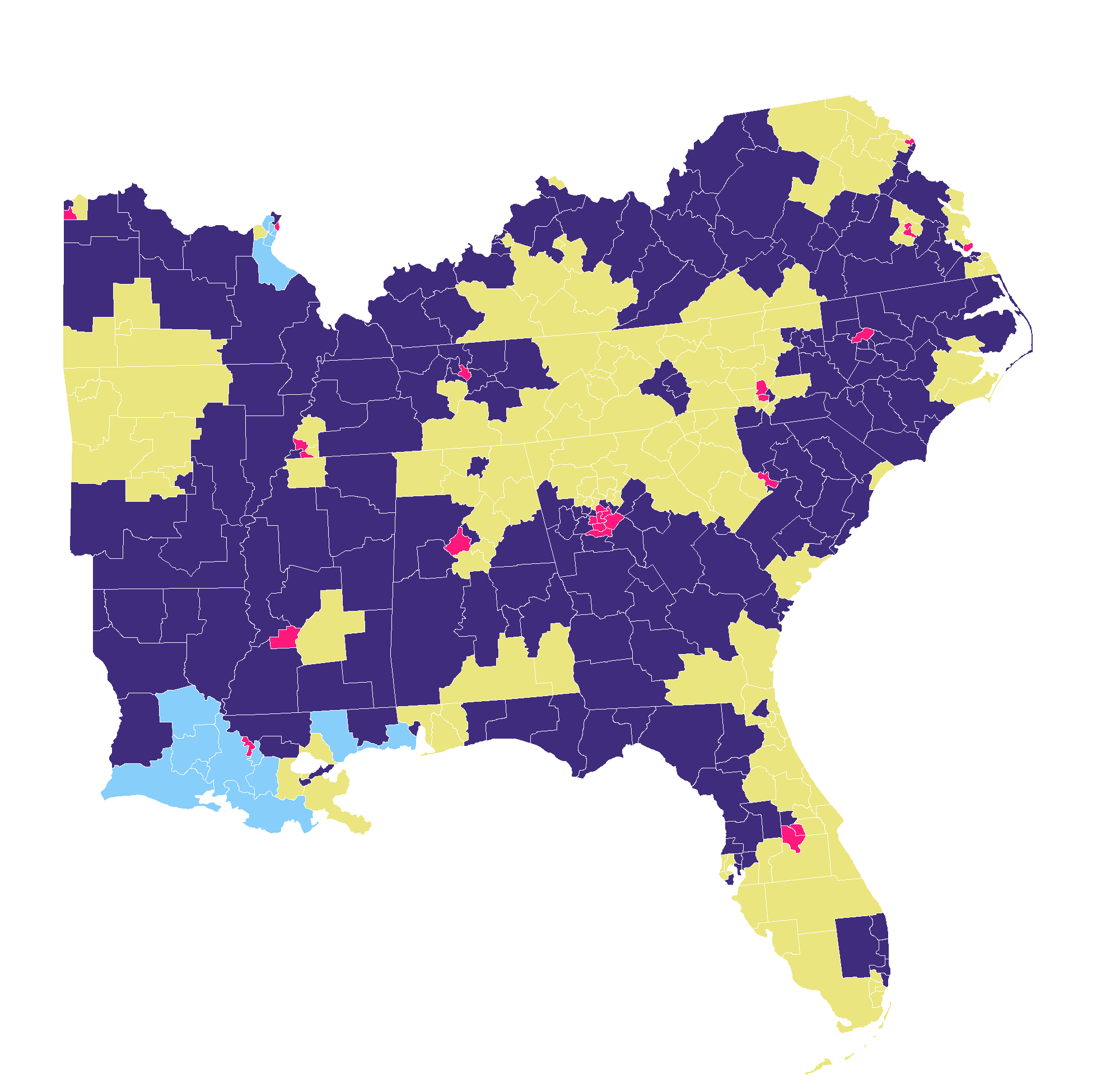 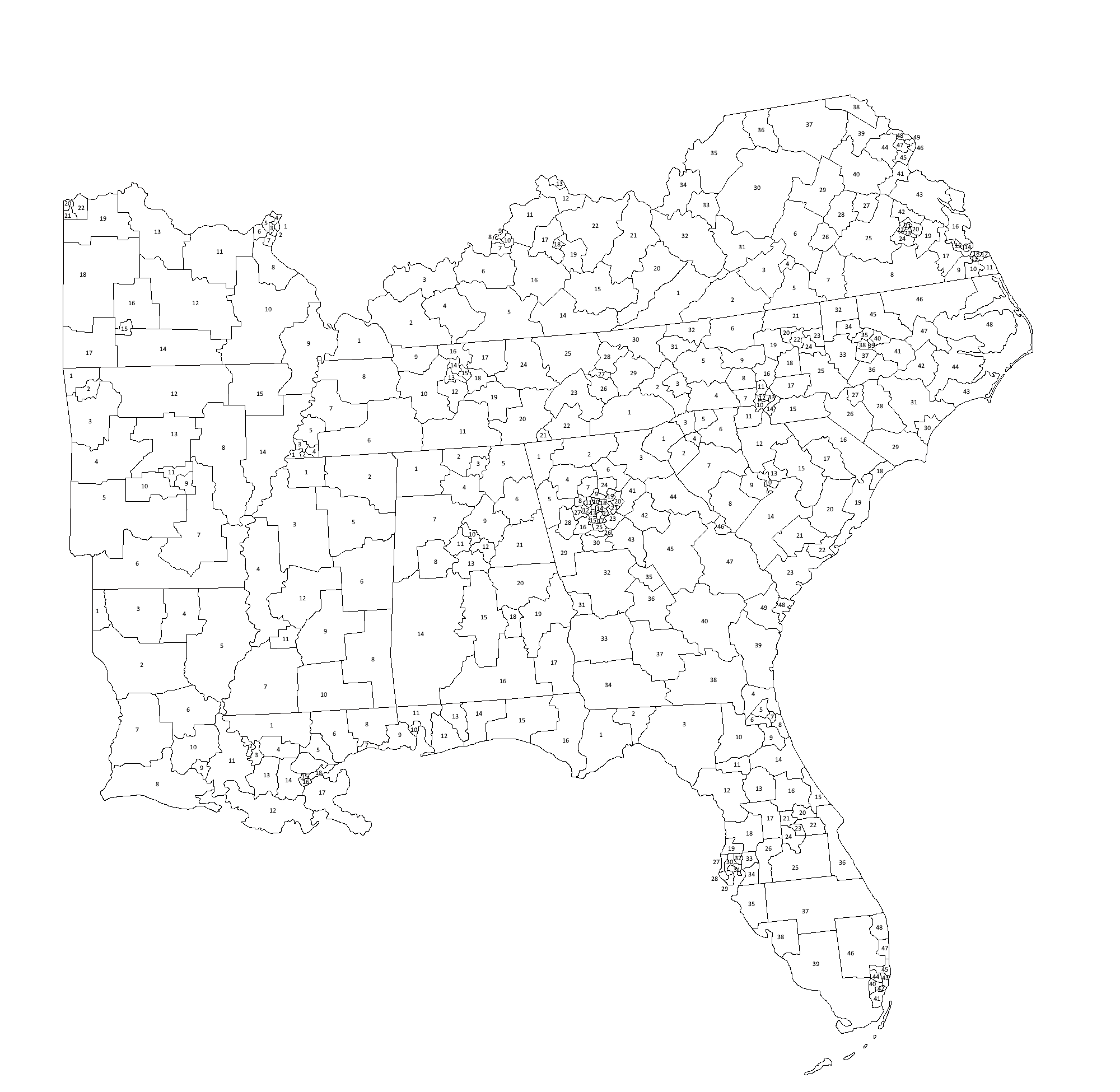 In the 2012 Dixie Presidential Election Virginia Senator Jim Webb defeated National Senator Newt Gingrich by 1.2% the closest presidential election since 1988. Webb who was fairly unknown before the election defeated vice-president Mike Espy, who was appointed VP by Sam Nunn following John Edward’s resignation from the presidency in 2009, in the primaries. Following the Edwards scandal, the Unionist Party became deeply unpopular with the National Party leading the Unionists in almost every poll. Once Webb and Gingrich won their respective primaries however, the gap in the polls between the parties began to shrink. Webb was on the more conservative end of the senate Unionists and was a critic of Edwards. Gingrich was one of the loudest voices calling for Edwards to be removed from office but has garnered attention as a strong conservative firebrand. Webb ended up winning by a narrow margin and became the first Unionist President to with without winning Kentucky.

In the 2012 vice presidential election Arkansas Senator Mark Pryor defeated former Virginia governor Bob McDonnel. While Gingrich was seen as too controversial, McDonnel was seen as too boring and uncharismatic. McDonnel was also criticized for running for VP despite not being a Senator, something that has become an expected qualification for the President of the Senate. Pryor became well known as a close supporter of Nunn both when he was VP and President.

In 2006, North Carolina Senator John Edwards was elected president defeating former governor Mike Huckabee. Edwards became the first Unionist candidate to win the election without winning Huckabee's native Arkansas. Going into the election, it was believed that Louisiana would be winnable for the Nationals due to the fierce backlash against the Unionists and President Graham in their handling of Hurricane Douglas in 2005. But the Nationals nominated Huckabee, who was probably the most hated politician in Dixie by francophones due to him vetoing a bill that would remake French an official language in Arkansas while he was governor. The Parti La Louisiane who signaled that they would most likely be endorsing the National candidate instead voted to endorse Edwards at their convention. Edwards ended up carrying Louisiana by 4.8% with there being a sharp electoral contrast between the Anglo and French populations in Southern Louisiana and West Florida. Edwards would later resign in late 2009 due to allegations of misuse of government funds to cover up an affair.

In the VP election, incumbent VP Sam Nunn easily cruised to reelection against Tennessee senator Fred Thompson. Nunn is the first vice president to run for a second turn since Howard Baker in 1982. Nunn was very popular in Dixie and this race was never thought to be competitive. During the nominating process, rumors swirled about the National's trouble to find a candidate for the election. They finally settled on Thompson who had already announced his retirement from the Senate at the time. Allegedly, the Nationals had to pretty much force Thompson to even campaign for the position after nominated and audio leaked in early May of Thompson saying, "I can't wait to lose so this damn campaign can be over." Nunn is the first Pres. or VP nominee to win every state since Long in 1952. 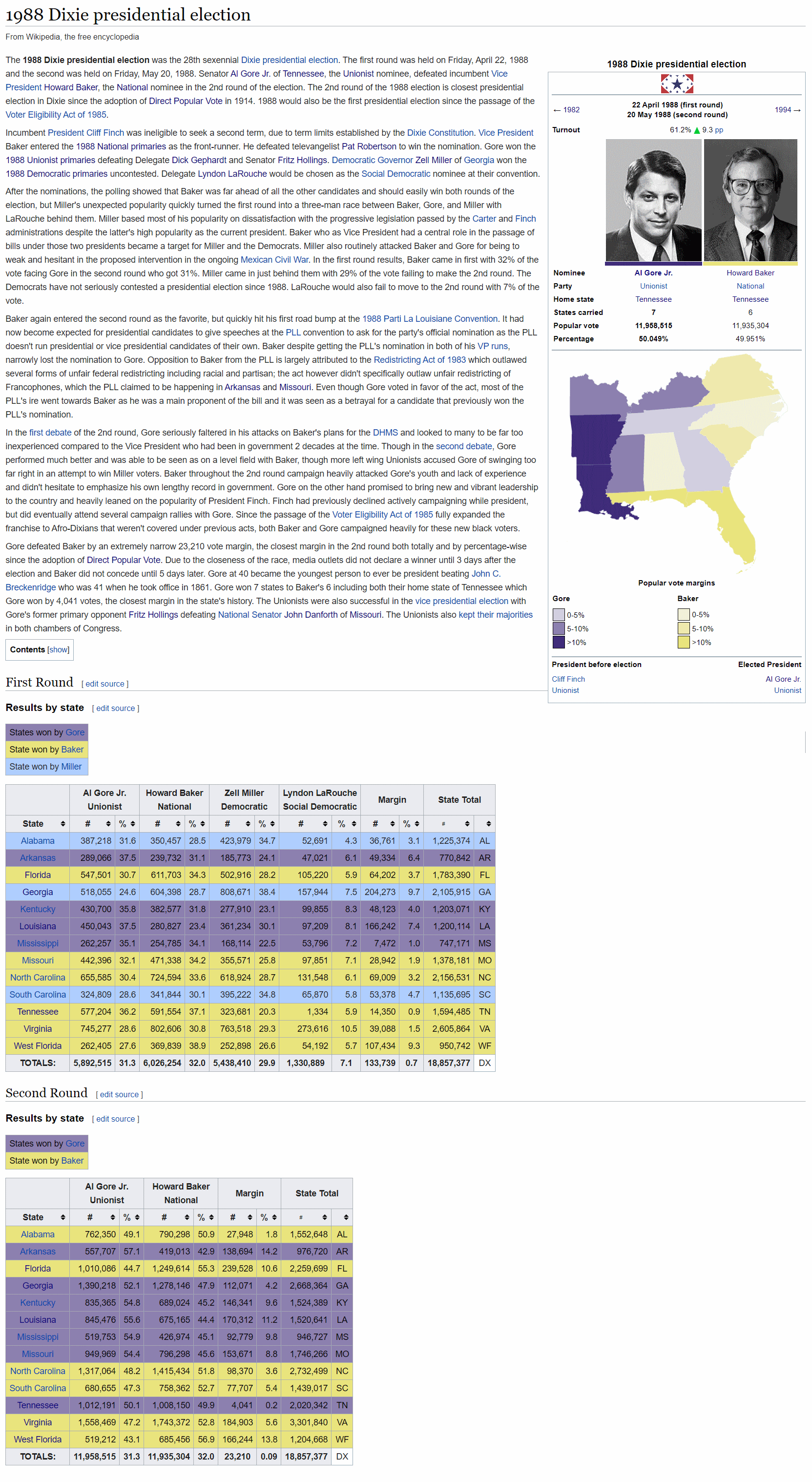 The Professor said:
It's not bad it just needs some tweaking and a history.
I'd suggest reversing the colours. That way you can start from the expected red ensign for "British Dixie".
So the red ensign features a white diamond with a blue symbol, a rose perhaps. Then the rebels start buy cutting off the half with the British flag, giving you a squarish red flag with white diamond and blue symbol.
This is then modified to give you your blue stars on white diamond on red. Perhaps different length flags - e.g. square for war and rectangle for regular
Click to expand...

Okay, so I took your suggestions and this is what I've got. 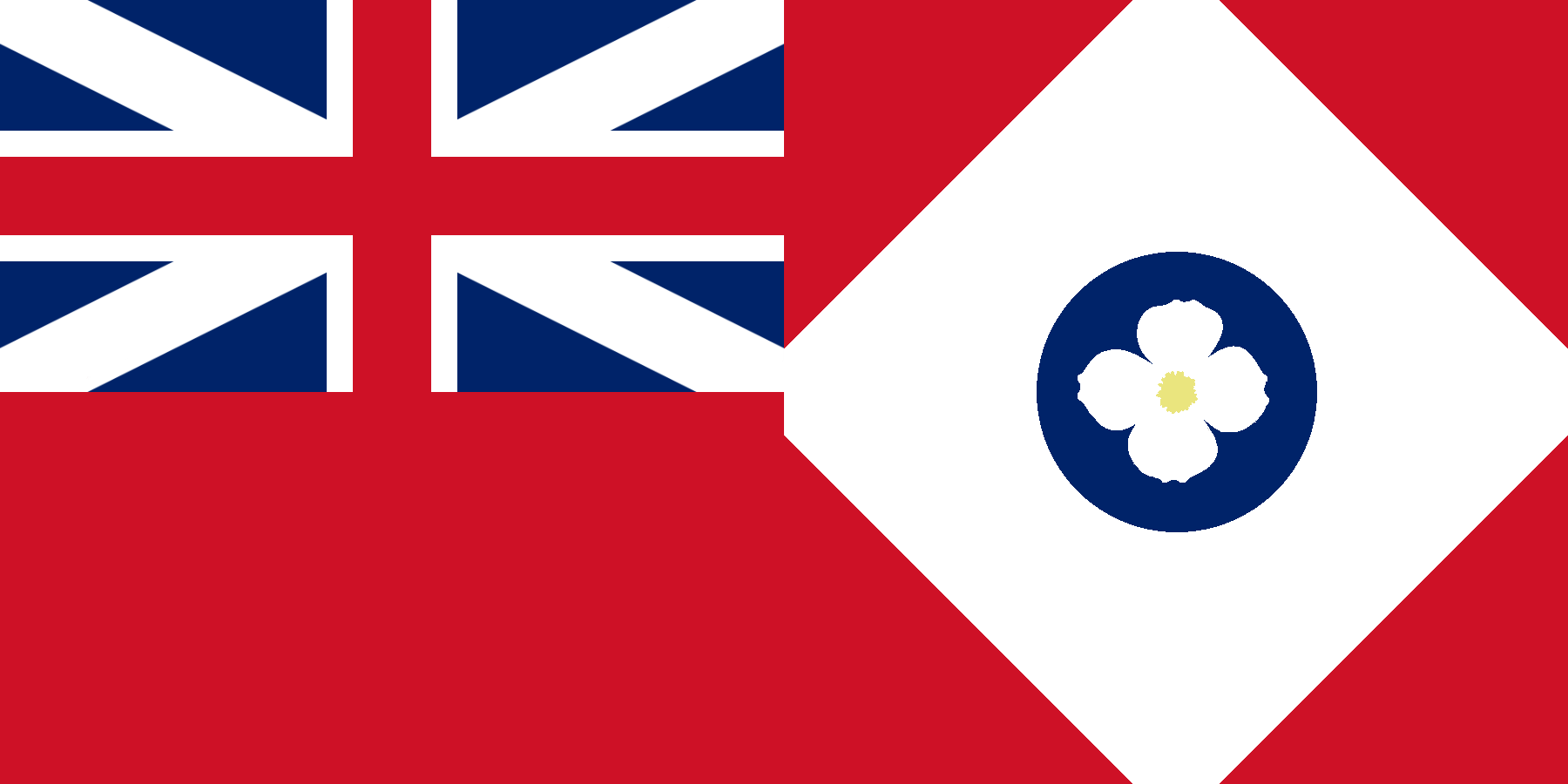 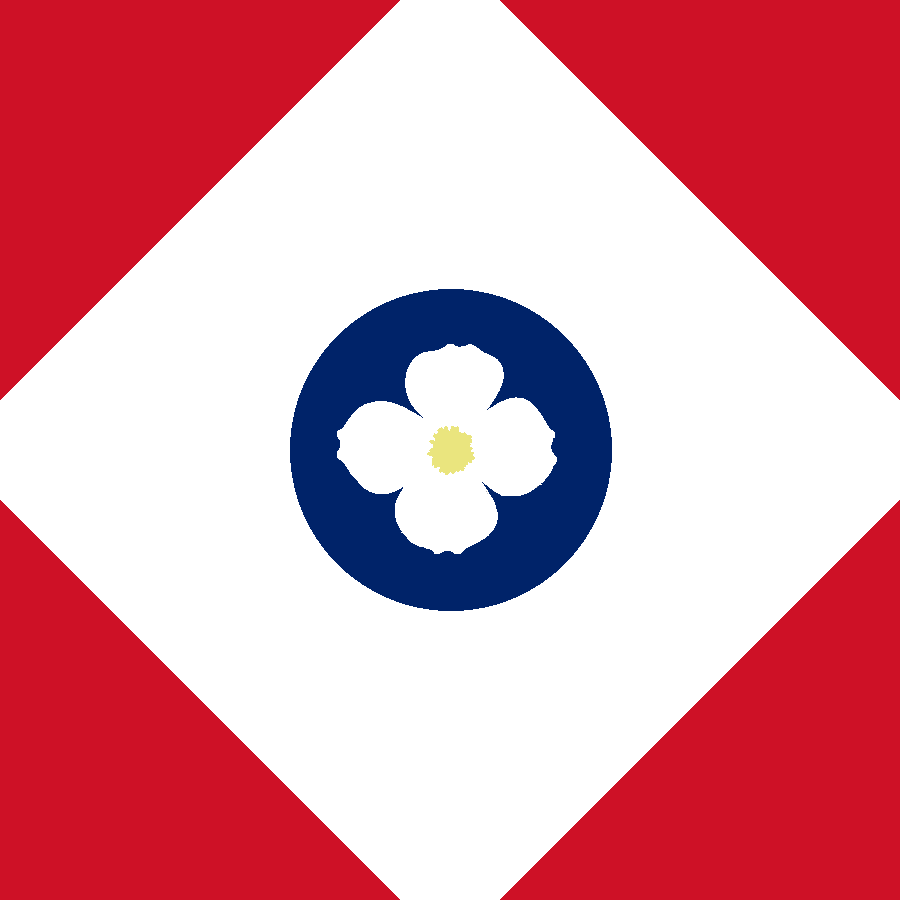 The 11 Star Flag:
The first official flag of Dixie adopted in 1827 is based off the Dogwood flag with a darker red and 11 stars representing the 11 states at the time of adoption. 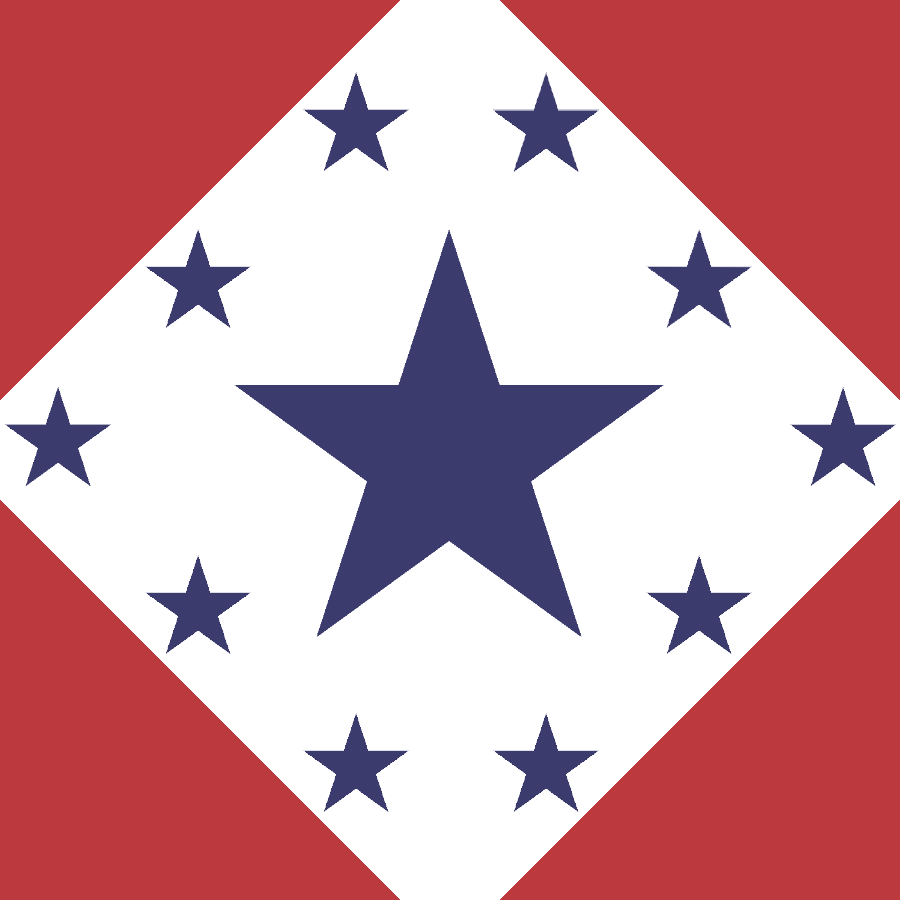 The 13 Star Flag:
The current flag of Dixie was adopted in 1841 with the proportions of the flag changing from square to 3:5 and added 2 more stars for the newly joined states of Florida and West Florida. 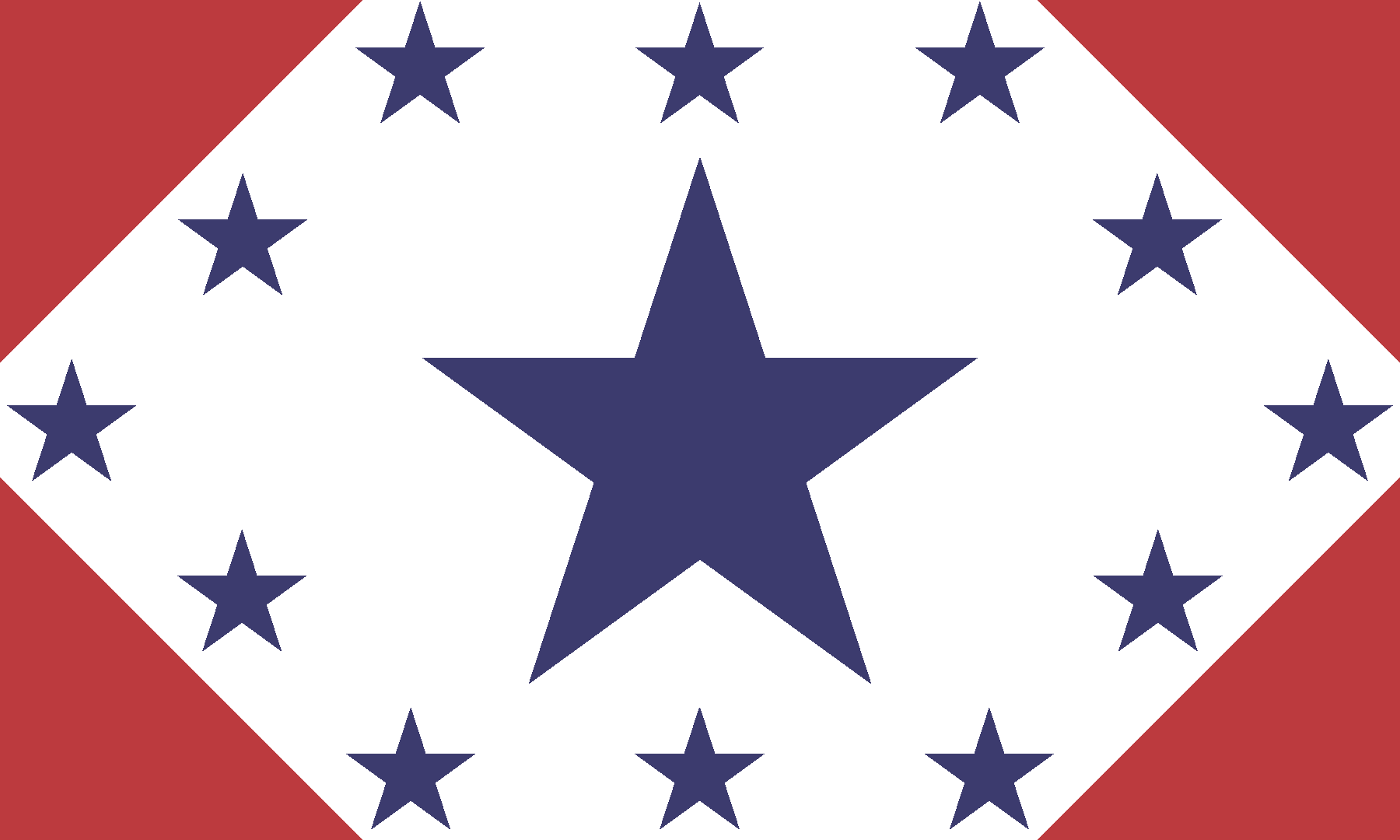 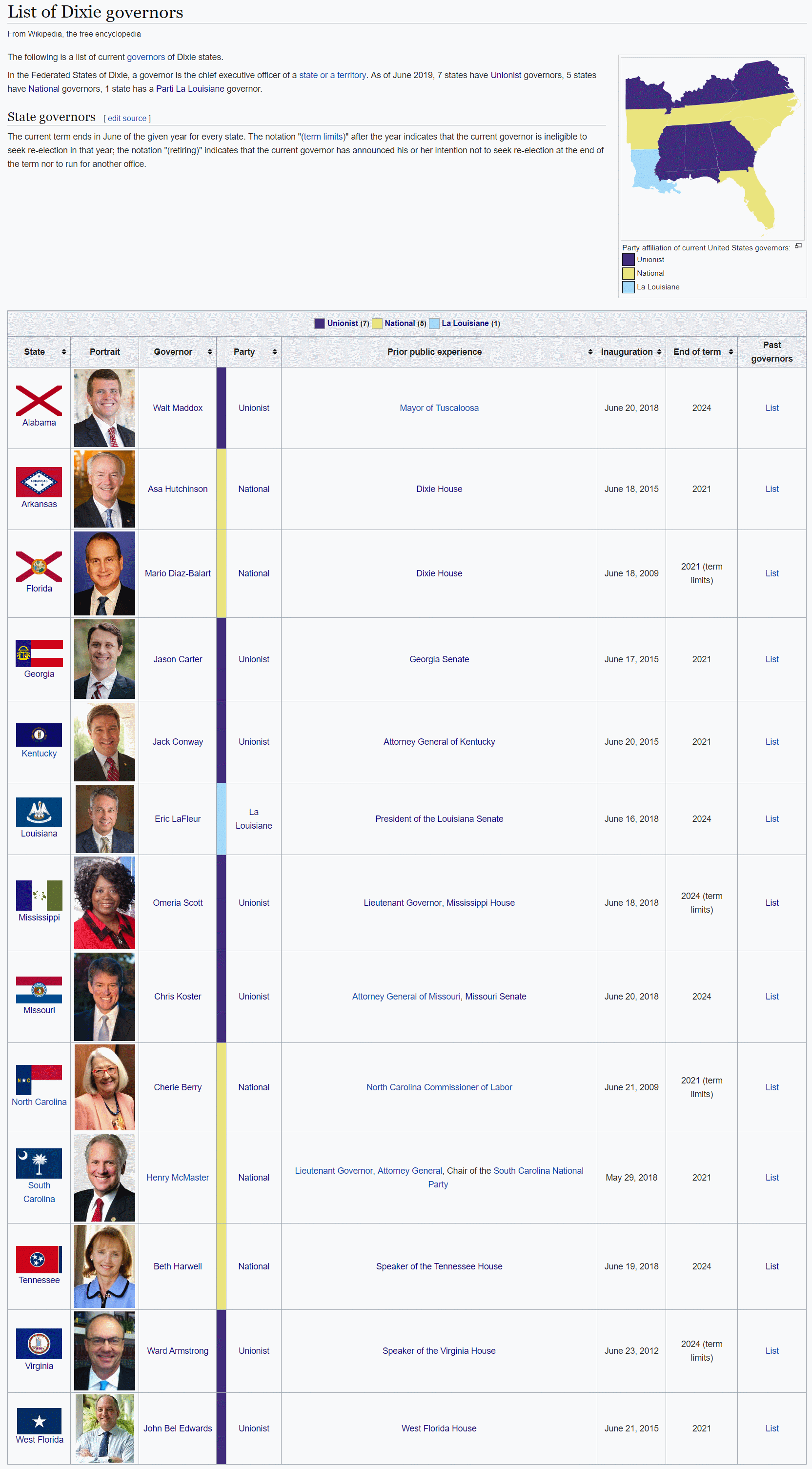 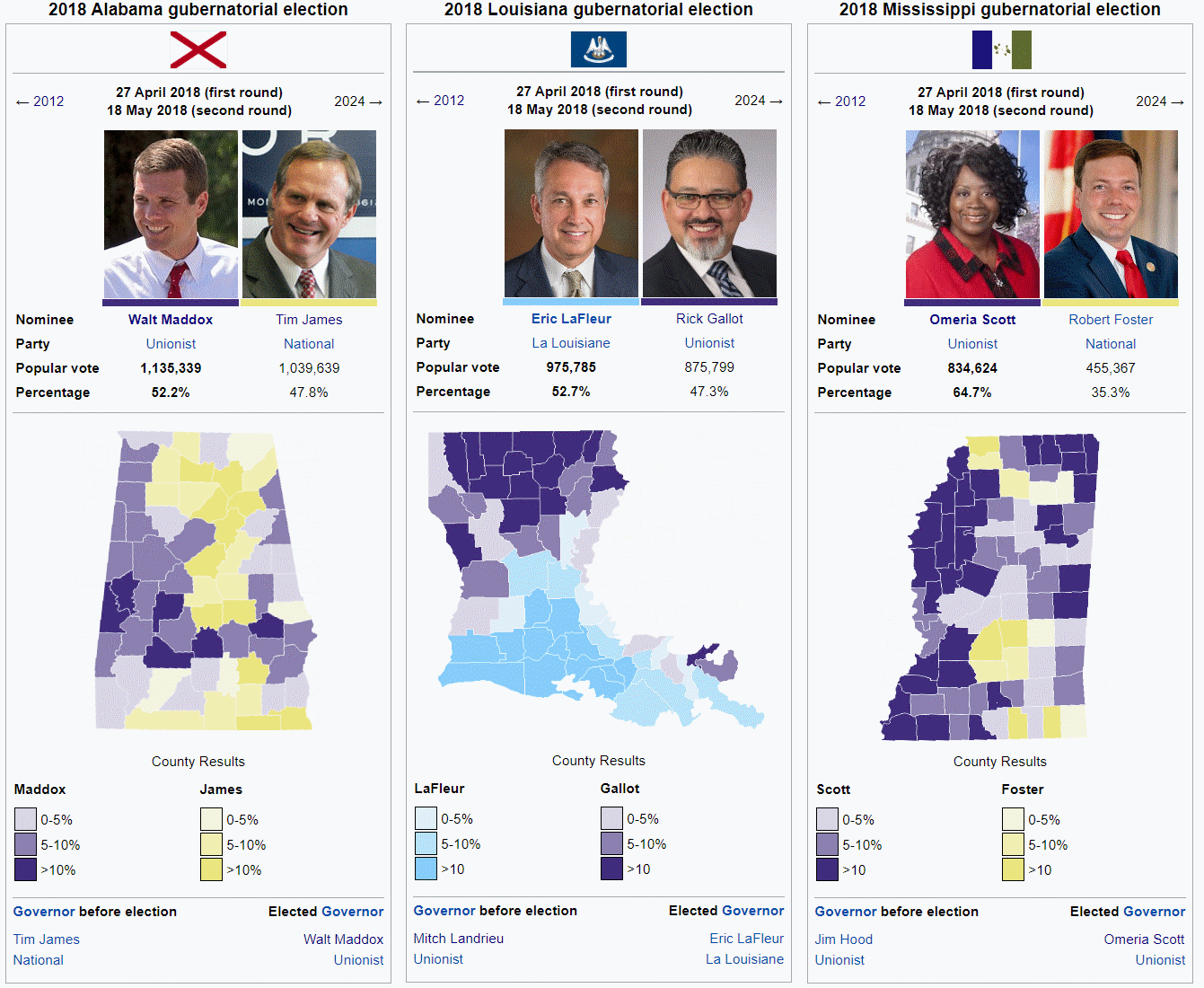 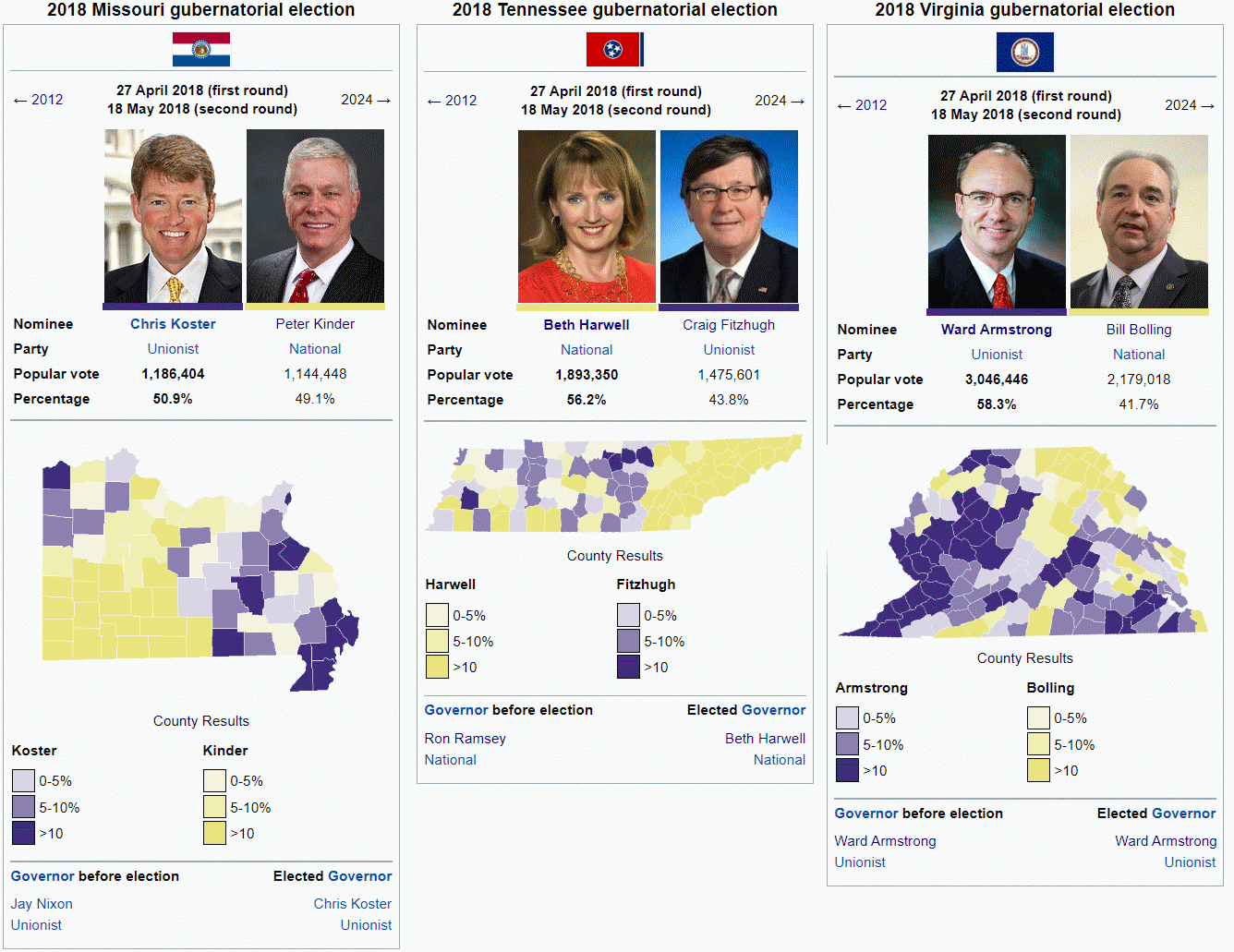 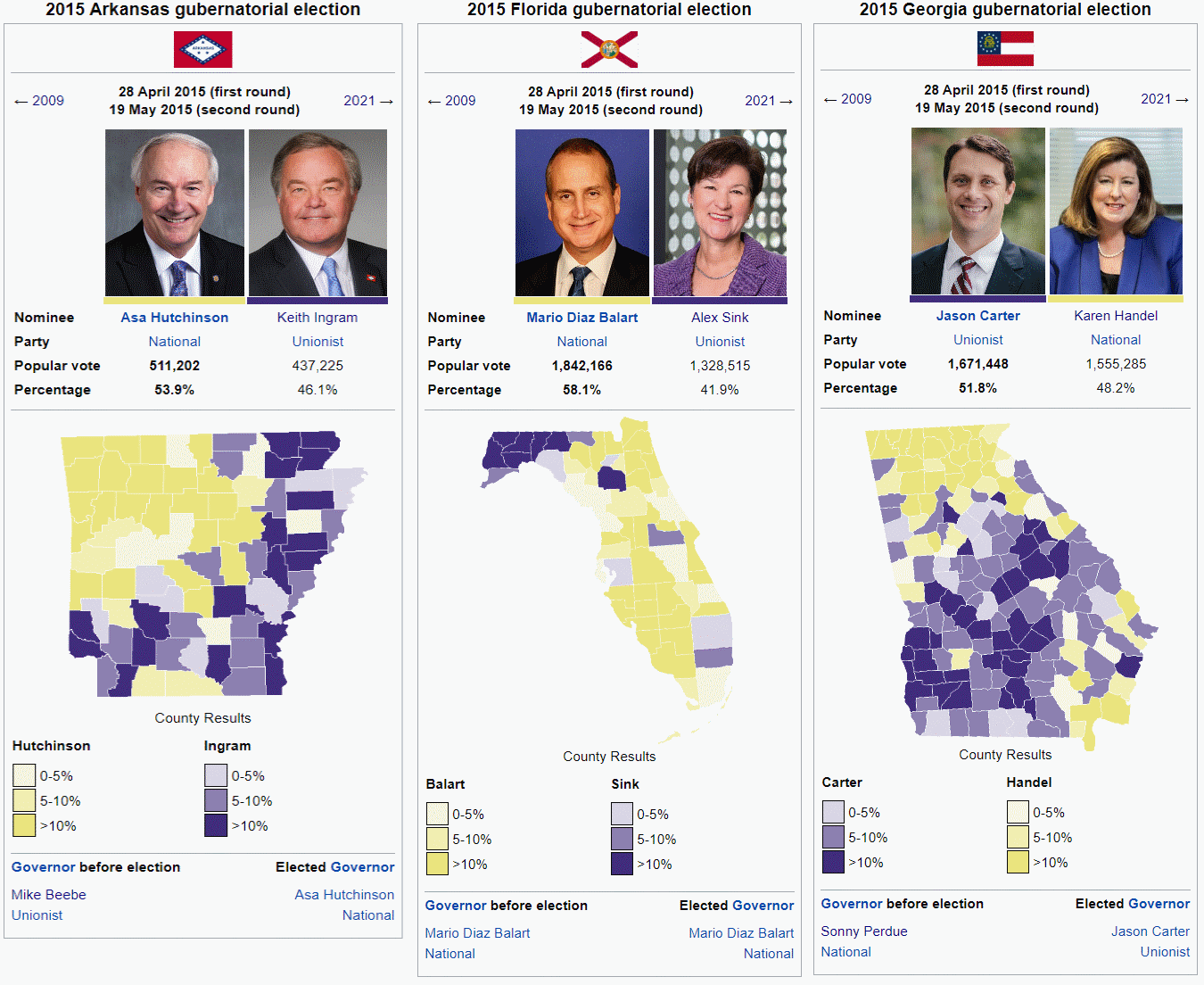 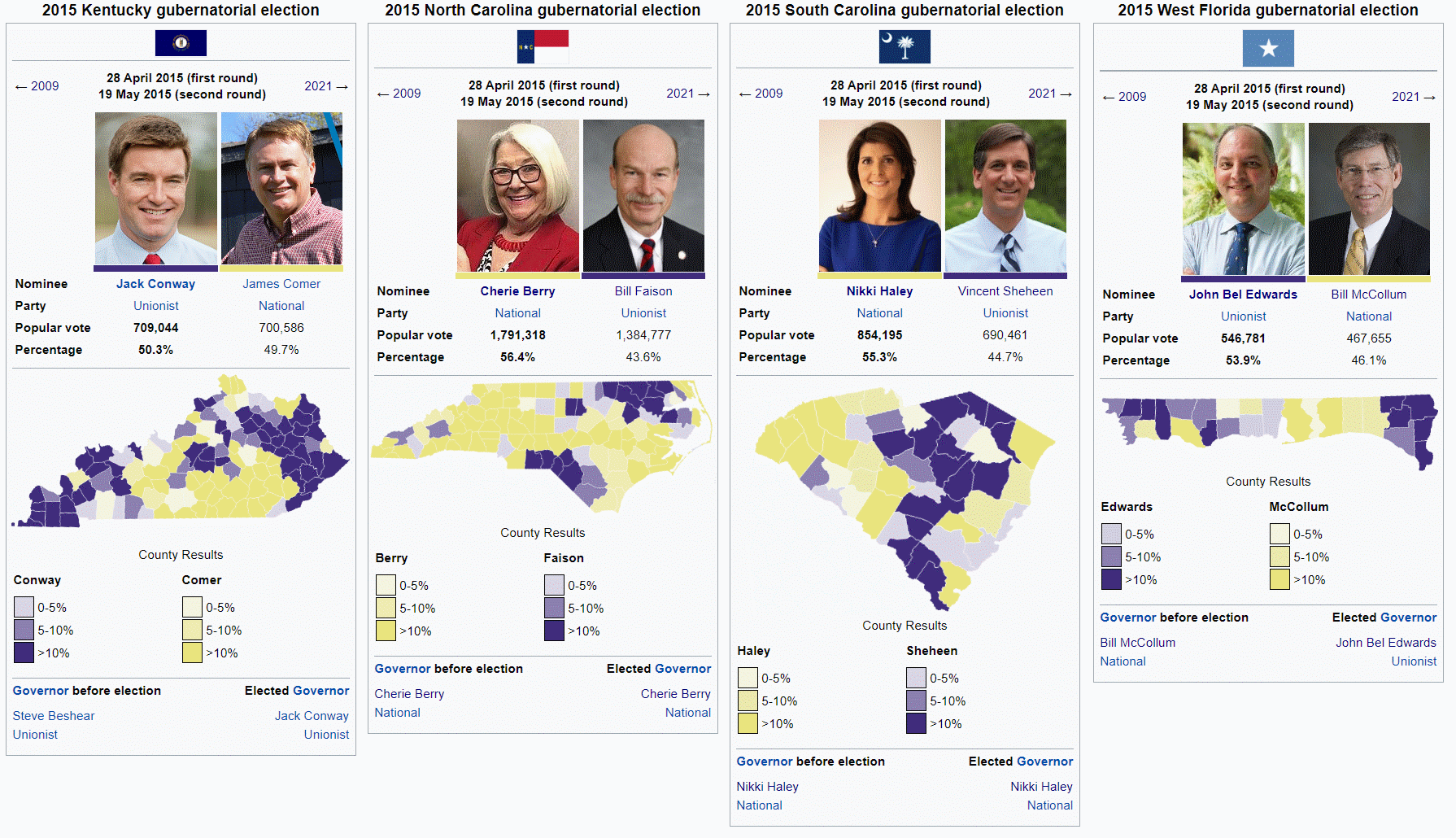 Members of the Dixie Senate

Senators are chosen similarly to the Australian Senate with each state getting 6 senators. 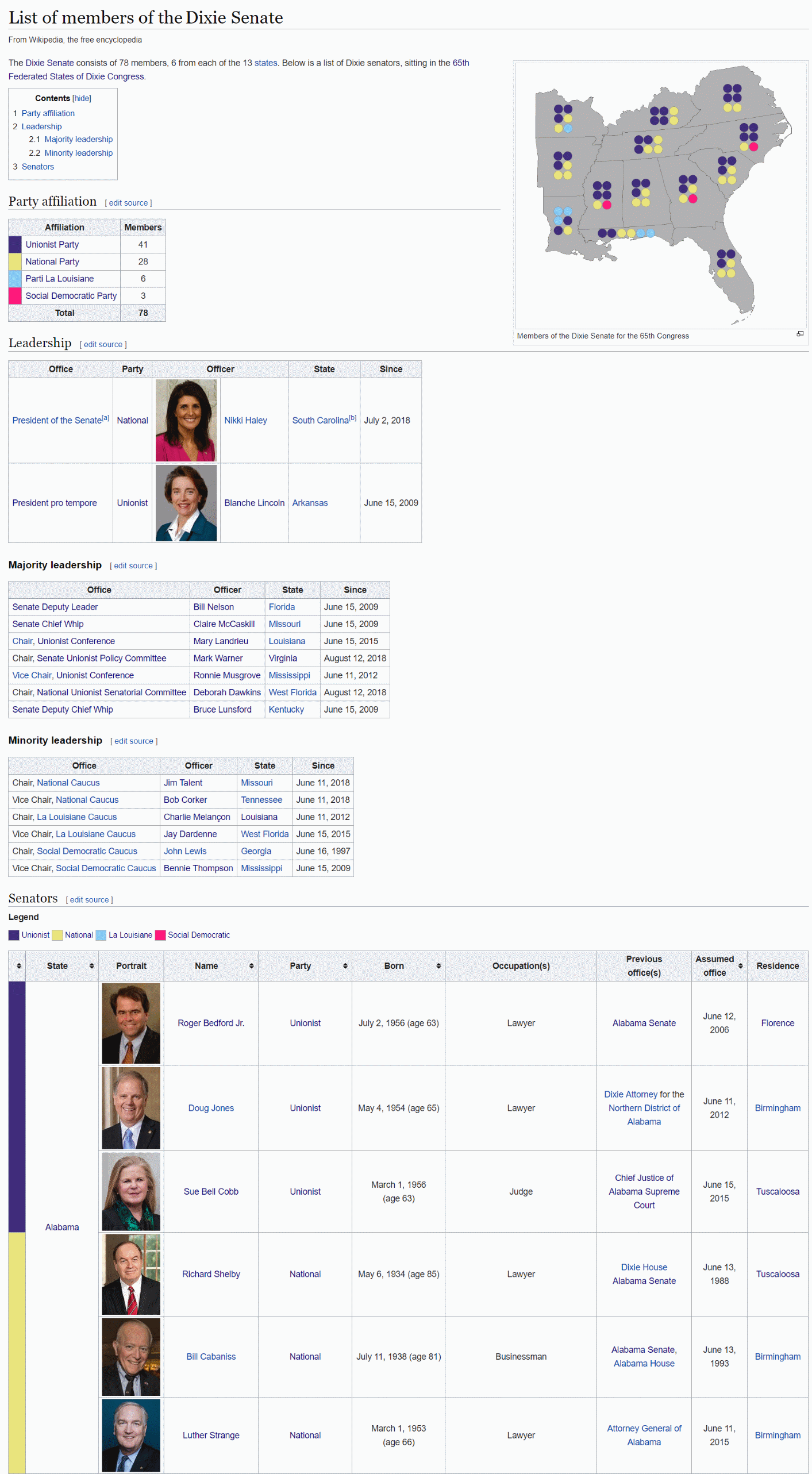 In the 2019 Virginia Senate special election, Unionist candidate Natalie Tennant defeated National candidate State Senator Frank Wagner. Tennant, who was Virginia Secretary of State at the time, was appointed by Governor Armstrong to fill the Senate vacancy left by Joe Manchin who was appointed as Secretary of the Interior by President Mitch Landrieu in July 2018. 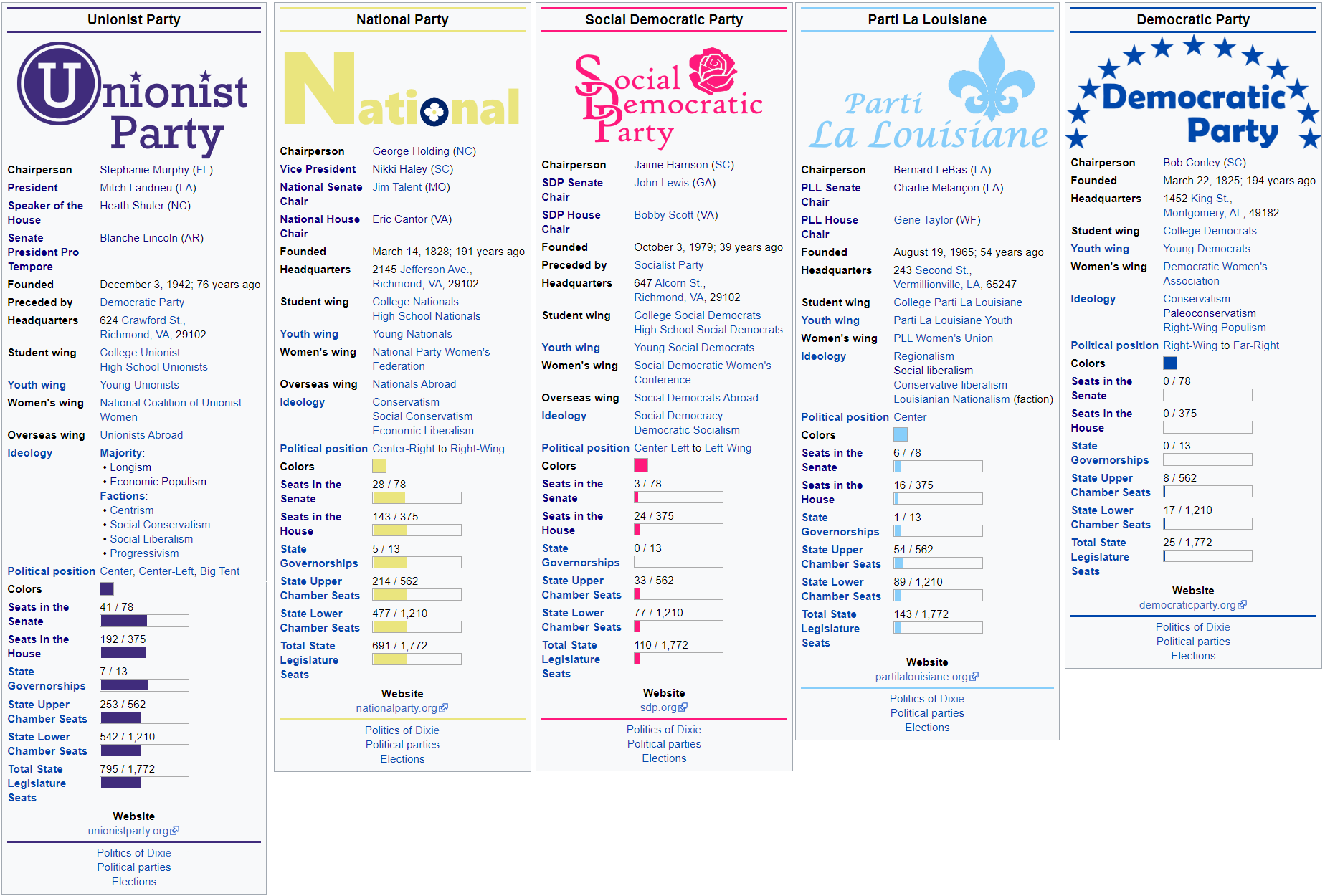 On November 1, 2019, the second round of four special House of Delegates elections were held in Arkansas. In June of 2019, the Dixie Supreme Court struck down the 4 districts because of discrimination against francophones in Southeast Arkansas. The Court order the AR state legislature to redraw the four districts and to hold special elections for the districts as soon as possible. The new map of the districts included a francophone majority district and one now much more National Party friendly district (all 4 previously had Unionist incumbents). The first round of the special elections was held in October and had all four Unionist incumbents proceeding with 3 National challengers and one PLL challenger in the now francophone majority district.

6th District
In the 6th district, Unionist incumbent Mike Ross of Nevada County defeated AR State Delegate Sonia Barker of King County. The 6th is the most Unionist of the 4 districts and the one that Mitch Landrieu won by the largest margin in 2018. Ross who serves as a member of House leadership as Chair of the Unionist Policy Committee comfortably defeated Barker carrying 9/10 counties in the district, however his 9 point win over Barker is his closest election since he was first elected to the House in 2000. Ross also carried the 6th by a smaller margin than Landrieu 1 year earlier. This is largely attributed to the low turnout in the special elections. Barker only carried one county in the election which includes her district in the AR House. 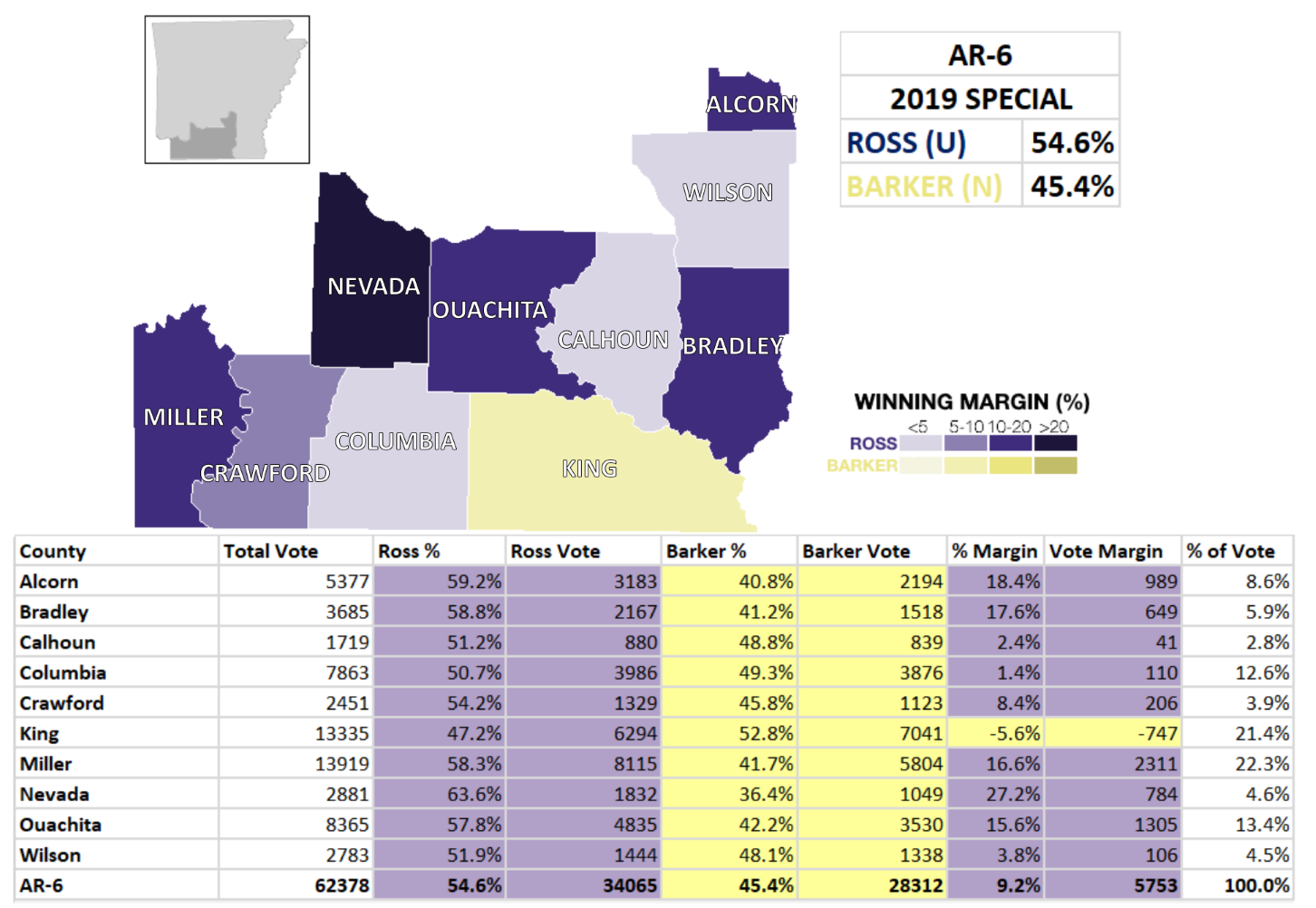 7th District
In the 7th district, Parti La Louisiane member Jean Bergeron of Lincoln County (who started the suit that led to the Supreme Court case in the first place), defeated incumbent Eddie Cheatham of Ashley County. Bergeron ran in the old 7th district in both 2015 and 2018 as the PLL nominee but failed to make the 2nd round in both cases. Bergeron performed best unsurprisingly in the higher French-speaking areas in the center of the district. Cheatham did the best with the higher Anglo areas in the South and Northeast of the district. Bergeron's win was mostly attributed to his surprising strength in Alcorn County, the largest in the district by population and includes most of the city of Bonneville. With his win, Bergeron became the first PLL member to hold federal office in Arkansas. 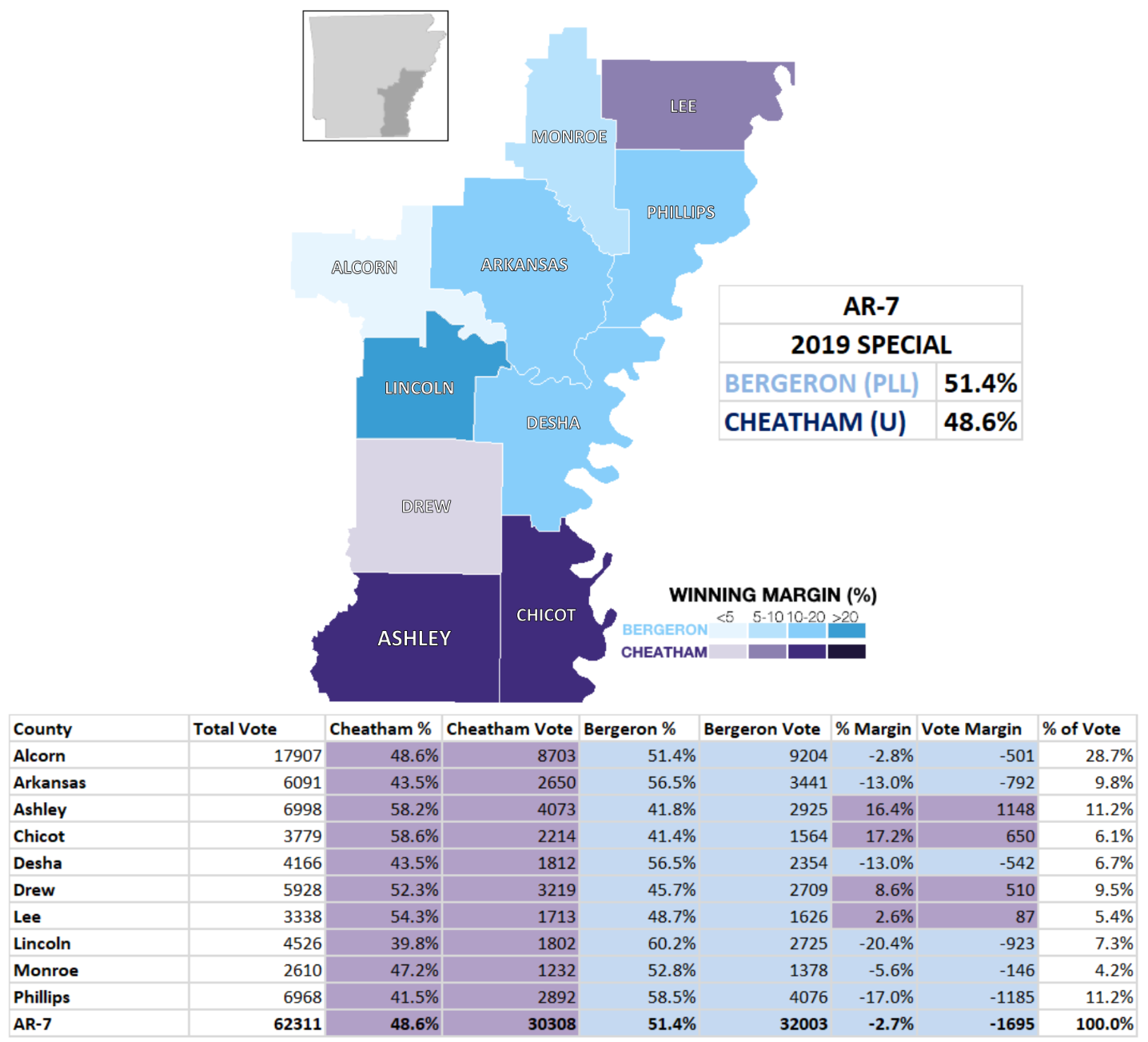 8th District
In the 8th district, Unionist incumbent Phil Reynolds of Woodruff County was defeated by AR State Delegate Johnathon Dismang of White County. This district was changed by the National controlled AR State Legislature to be much more National than its predecessor. Some of the more heavily Unionist parts of this district were moved to the 7th while the very National Lonoke County was moved into the 8th. Even though Reynolds would win the non-Lonoke parts of the district by 21 votes, the inclusion of Lonoke would be enough to swing the election toward Dismang. 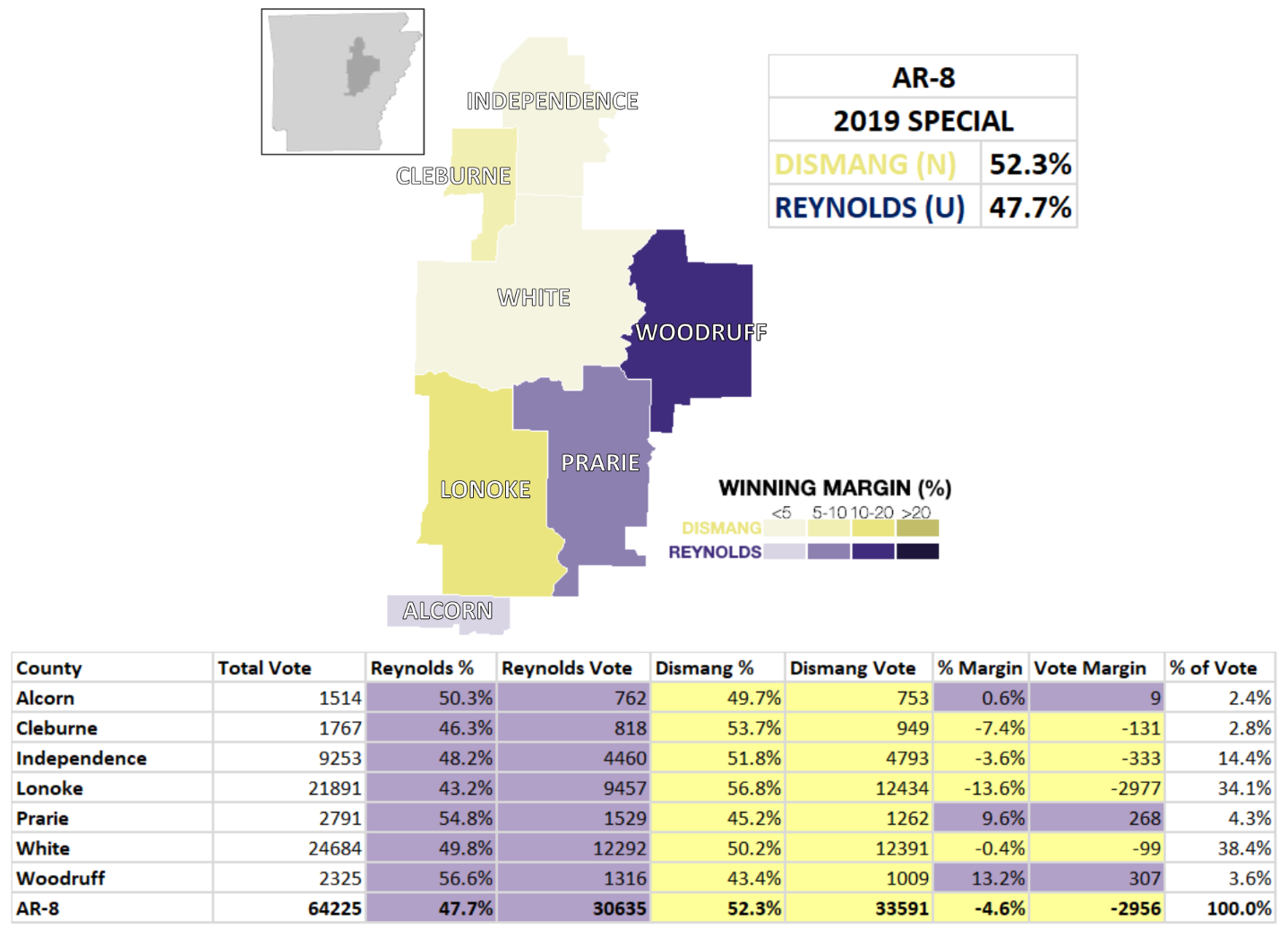 14th District
In the 14th district, Unionist incumbent Reginald Murdock of St. Francis County defeated Cross County Commissioner Ronald Caldwell. The 14th is the district that changed the least in its redrawing and the Unionist-favored district only moved slightly to the right with the redraw. Murdock would perform best in the more heavily black areas of the district. Caldwell would carry is home county of Cross and would do well in the newly added Independence and Jackson Counties, handily winning the former and only narrowly loosing the latter. 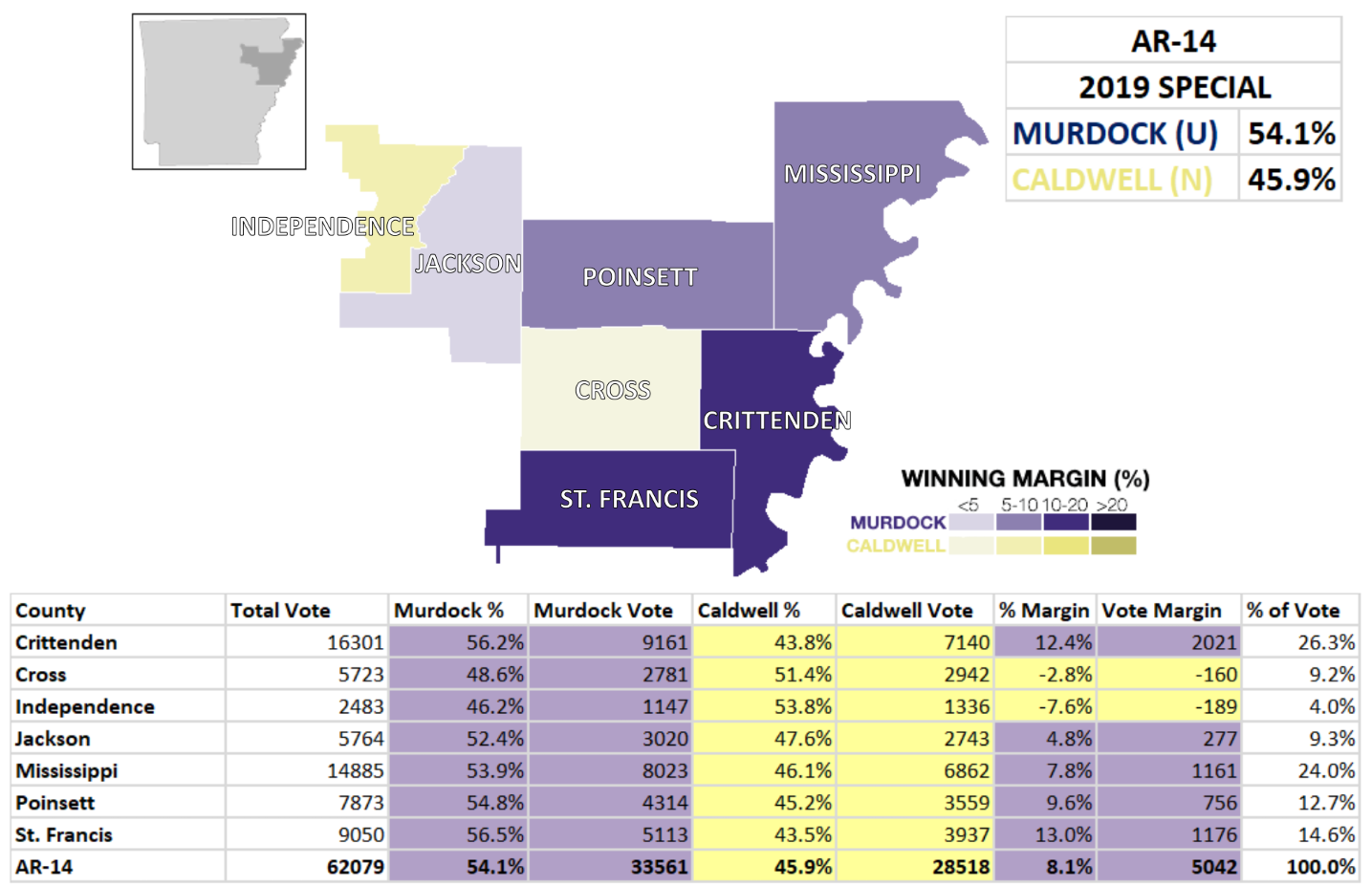 With the loss of two districts in the special elections, the Unionists go from 192 seats in the House to 190 shrinking their 4-seat majority to only 2. The Nationals gain from 143 seats to 144 and the PLL from 16 seats to 17.
Threadmarks
You must log in or register to reply here.
Top
Share:
Share
Top