I have some of the countries down but I am open to any ideas for more nations.

You can see that it's loosely based off of OTL but at the same time very different. When you make a nation on here, make sure that it is made in a way that they are different from OTL but you can still loosely base the borders off of OTL, since the population zones are in the same places. If you want you can make a new population zone like I did in france.

Ireland is in a civil war.

Scotland is at war with a minor english state over a border dispute (which may or may not have been staged.)

This Lower Saxon state is in a civil war.

This Bavarian state is one of the largest german states. It also has de facto control of this frankish state that is in the alsace-lorraine region.

In germany, the HRE is not a thing. I'm trying to make this timeline different from the other one so that religions didn't take off in some places and really took off in other places. 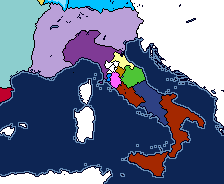 The italian region is where Christianity really took off. More so than OTL. Basically you can think of this region as the italian HRE.

The first colony so far was made by the Kingdom of West Europe (the brown nation in the benelux region), which is one of the strongest nations in Europe. I want to have a few other nations make colonies as well though.
Last edited: Jan 13, 2021

You can see the 2 states in spain, but I want to make a major Spanish state that focused on the Mediterranean instead of going to the atlantic. They'll own all the unclaimed med islands west of malta. 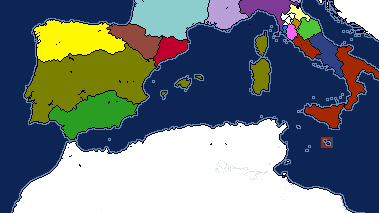 I think that should be fine