MotF 248: Neither Holy, Nor Roman, Nor An Empire

Donor
MotF 248: Neither Holy, Nor Roman, Nor An Empire

Make a map showing a political entity that no longer lives up to its name, or whose official designation does not reflect reality.

If you're not sure whether your idea meets the criteria of this challenge, please feel free to PM me or comment in the main thread.
---
Entries will end for this round when the voting thread is posted on Tuesday, January 25, 2022.
---
PLEASE KEEP ALL DISCUSSION ON THE CONTEST OR ITS ENTRIES TO THE MAIN THREAD.
Any discussion must take place in the main thread. If you post anything other than a map entry (or a description accompanying a map entry) in this thread, you will be asked to delete the post.

The New UAE: neither united, nor Arab, nor an emirate 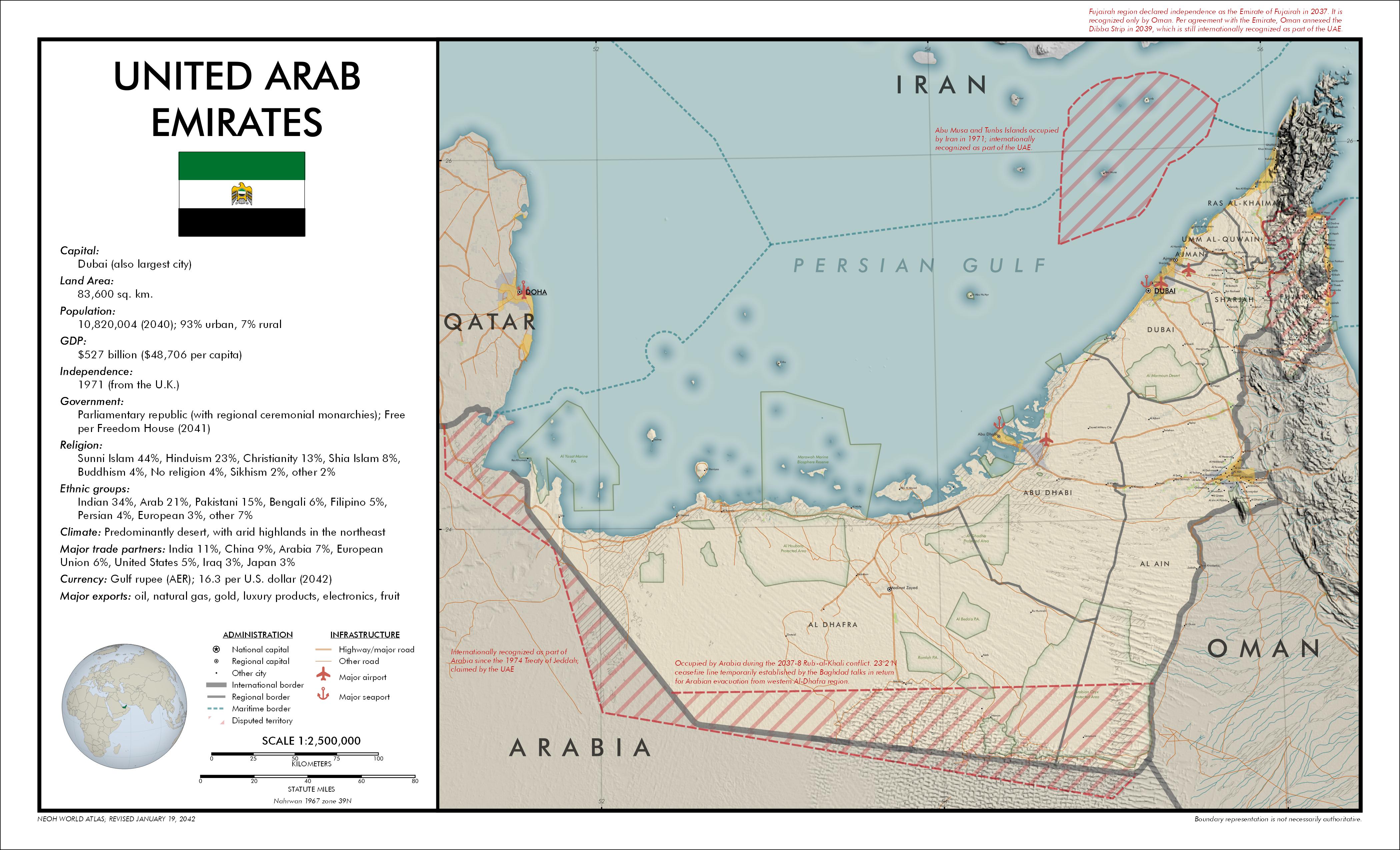 The second Arab Spring of the early 2030s, set off by the violent Saudi succession crisis, finally shattered the perceived stability of the Gulf monarchies. In the United Arab Emirates, calls for representation and civil freedoms were compounded by the country's massive non-citizen population - nearly 95% as of 2032. When violent crackdowns on street protests served only to further enrage the migrant worker population, the Emirs were forced to compromise or flee the country.

The result of the 2036 compromise between the opposition and the old order was the most liberal government on the peninsula. Full civil and political rights were extended to all residents, and foreigners living in the country at the time of the revolution were offered citizenship - millions of whom accepted.

This radical shift in domestic power naturally created a geopolitical rift between the UAE, which reoriented towards Iran and India, and neighbors and former allies of Arabia and Oman, both of which managed to weather the Spring with their autocracies mostly intact. Almost immediately, Riyadh made an attempt to seize the oil wealth of southern Abu Dhabi, leading to a short but brutal conflict characterized by heavy use of drone swarm attacks. At the same time, Oman gave its backing to the Emir of Fujairah, creating a breakaway client state.
Last edited: Wednesday at 12:19 AM 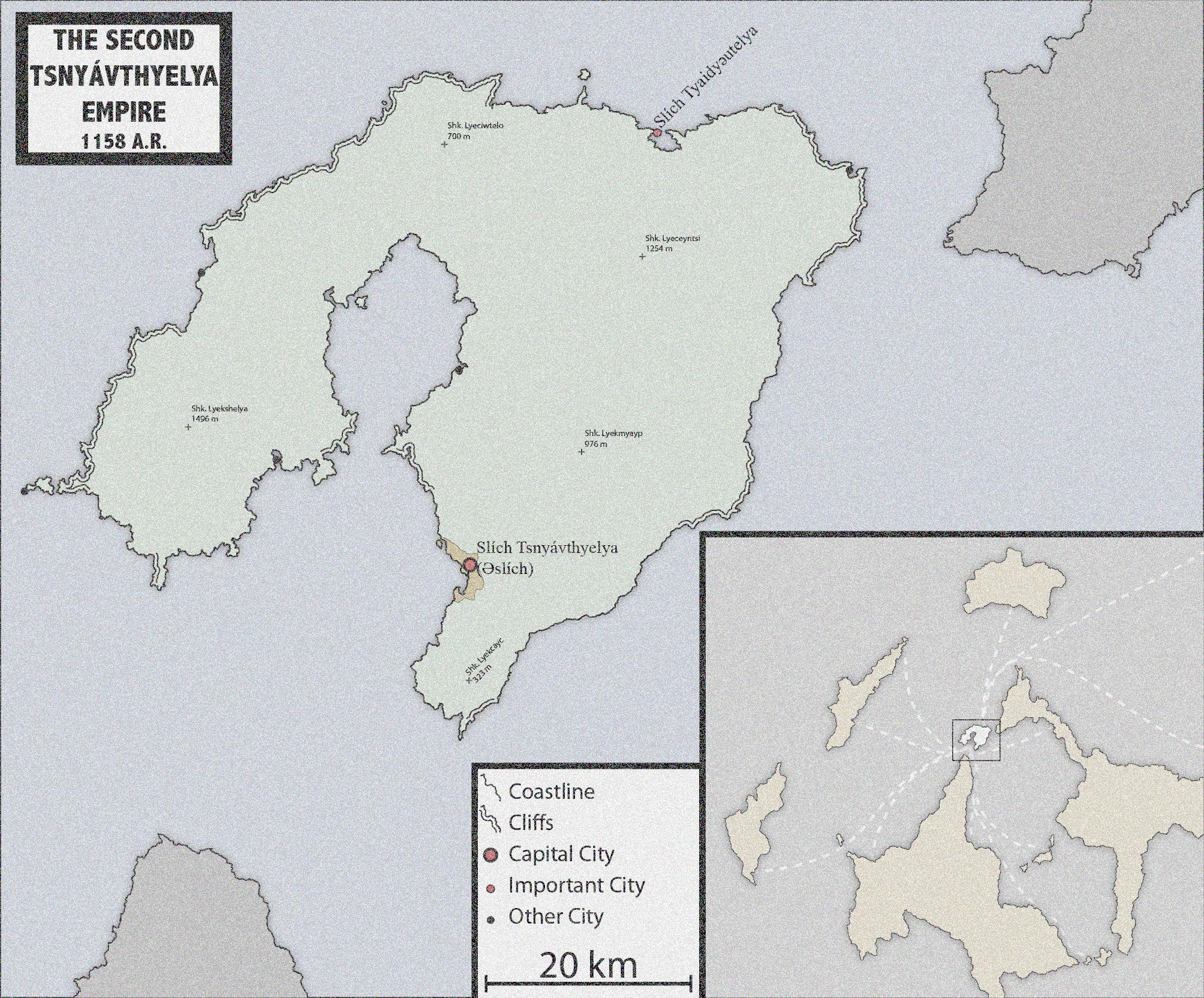 From the First Imperial Decree of the Imperial Council:
Since centuries past, when word of the true gods came to our island from distant lands, it has been known that here in the City of the Sea Cliffs lies the senior branch of the blessed bloodline. This city, the greatest in the world, which sees thousands of ships each day, has been the great capital of our continent-wide empire ever since these first enlightened people led the great holy wars across distant lands.
However, the old line of emperors has now undoubtedly lost their legitimacy, in the eyes of the gods and in those of the people. Since the sack of the City a century ago its power has scarcely been felt outside our island. It is perhaps true that in this modern age it would be impossible for any nation to equal the vastness of the early empire, but our current state is an embarrassment. The Emperor's name, even, has fallen into frequent use - the greatest disrespect one could imagine.
For this reason, then, we have claimed our throne from the pretender who sat in it before.
[...]
Signed, His Highness the Celestial Emperor, who makes his worldly home in Tsnyávthyelya, He who alone listens to the Gods, Climber of Mountains, Vanquisher of Countries.
In 1154 A.R., members of a group known as the Cliffside Guild infiltrated the Imperial Palace, assassinated the Emperor and his entire family, and thoroughly burned the palace to the ground. Shortly afterward, the Guild's leading council (now calling themselves the Imperial Council) claimed the Imperial Dignity for one of their members, known to history as the Great Pirate Emperor. The Great Pirate Emperor enacted a series of reforms that set up the entire island of several hundred thousand to function as a base for the Guild's piracy.
Five years later, the Imperial Council, with the support of the Great Pirate Emperor, chose from among their members a new emperor. This regular transfer of power, though never codified, was followed strictly for the duration of the Second Empire.
From Essays on the Dangers of Ignorance, in the First Person by Idlyusyelya
I should like to note an interesting historical factoid that has been brought to my attention. Though the idea of a modern large-scale republic is generally taken to have originated a long time later, the Second Empire of Əslích [Tsnyávthyelya] was in effect republican. The Emperor was chosen by the Council every five years, yes, but this position was largely ceremonial after the reforms of the Great Pirate Emperor. The true power always lay with the Council itself. The council was simply chosen by election from among the members of the Cliffside Guild, as it had been even before the Pirate Coup. After the Coup, the Cliffside Guild was greatly expanded, up to a few thousand as some report. Of course, this is a small voting population compared to the size of Əslích [ Slích Tsnyávthyelya], but I do still believe it should count among our histories of republicanism.
As far as I know, this is the only republic in history to have claimed that its elected leader and his entire family had the divine right to rule - and then, five years later, to then claim that a new family had supposedly fallen into the gods' favor.
...
Editor's note: Idlyusyelya uses the modern term, Əslích, but the contemporary term would probably be "Tsnyávthyelya," or "Slích Tsnyávthyelya" for the city.
This map was pretty fun to make. This is the first time i've done the "old, faded paper" texture, and it seems to have worked well enough. The map is not as detailed as perhaps I would like, but overall it's pretty good.
Some notes:
- Slích Tsnyávthyelya is pronounced just like it's spelled! [ˈslɨːç ˌt͡sɲaːv.ˈθʲε.ʎæ].
- Yes, this is the same universe as my entry for MOTF 246. This map is set roughly 150 years earlier. The downfall of the Pirate Republic Second Empire of Tsnyávthyelya was caused by a catastrophic monsoon between the eras of the two maps; this is the same monsoon that swept out a vast lowland, most of which was already below sea level, and formed the eastern straits which are visible in the bottom left of the other map.
- This city is huge. While probably not the greatest in the world, as the Imperial Council claims, that entire colored area on the map is urban. That's a large area. This city is easily over a hundred thousand people, and this era is similar technologically to our late medieval.

TL;DR: A group of pirates took over a theocratic, hereditary empire and replaced it with what was essentially a pirate republic - but they still claimed divine right to rule, and sacred blood, and all that.
Last edited: Sunday at 3:11 PM

Empire of the South
the United Kingdom of "Portugal", Brazil and "the Algarves" 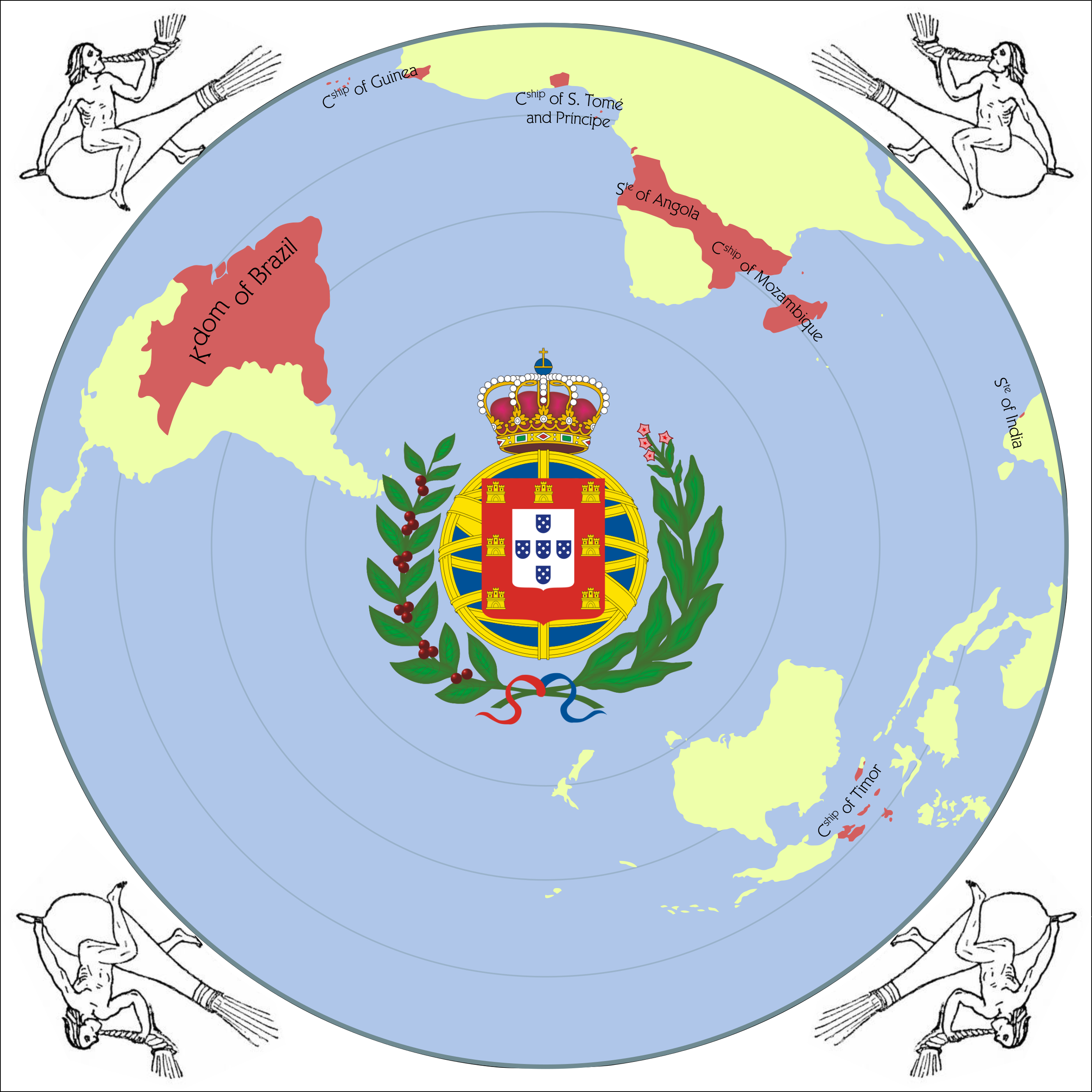 I don't have much to say here, I just happen to like the fact that during the Napoleonic Wars there was a United Kingdom between Portugal and Brazil that didn't actually control Portugal and had its capital in Rio de Janeiro. Let Napoleon win and voilá, you get a Portugal that doesn't hold any of Portugal, but continues to claim its titles, holds its monarchy and inherits its empire, building a large transcontinental empire with posessions from the Amazon to New Guinea, passing by the Old Guinea.

And for some reason I just really enjoy making South Pole-centric maps. It's a pretty simple map besides that, I'll admit, but I do kind of like the simplicity. I tried including foreign countries and other stuff, but ended up hiding those layers since I found them too crowding. The South Pole perspective already makes the map seem quite alien, so keeping it simple turns out to be essential to avoid it being a eyesore.

As for the four winds, I simply wanted something to fill that space and I enjoyed these ones. They don't have anything to do with Portugal, but I do like them.

Not my best work, I'd say, but I had fun doing it and I enjoy the end result.
You must log in or register to reply here.
Top
Share:
Share
Top