Make a map showing a group or people that has ended up in a very different place than OTL.

If you're not sure whether your idea meets the criteria of this challenge, please feel free to PM me or comment in the main thread.
---
Entries will end for this round when the voting thread is posted on Monday, March 30th, 2020.
---
PLEASE KEEP ALL DISCUSSION ON THE CONTEST OR ITS ENTRIES TO THE MAIN THREAD.
Any discussion must take place in the main thread. If you post anything other than a map entry (or a description accompanying a map entry) in this thread then you will be asked to delete the post. 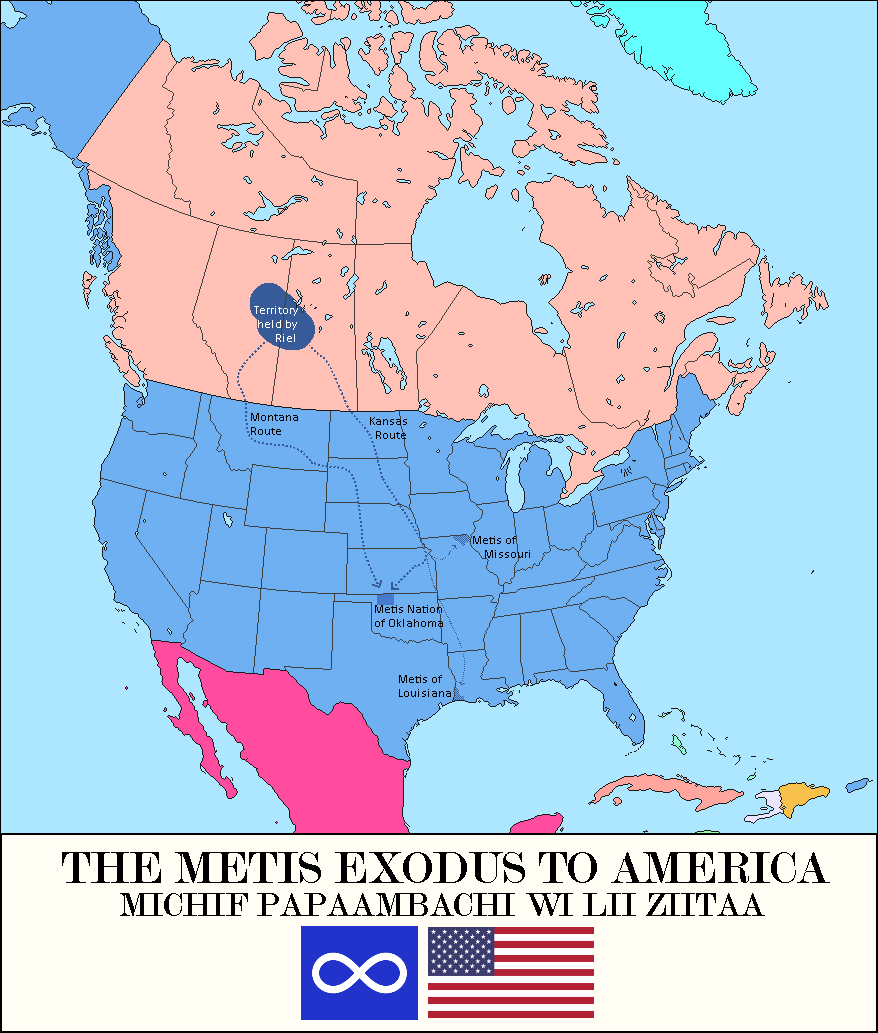 In 1885, A Metis rebellion in Canada led by Louis Riel was defeated, and Riel was hanged. In the months following Riel's execution, fear of persecution grew as the Metis of the area were slandered in the press as traitors and a criminals. Fearing what their future in Canada may hold, many Metis leaders began promoting the idea of an exodus, possibly to the United States or Mexico. In 1887, Dennis Wolf Bushyhead, Chief of the Cherokee Nation of Oklahoma, offered to give the Metis a section of the Cherokee Outlet in Northern Oklahoma, and Metis leaders began encouraging their people to head south. Thousands of Metis wagons packed up and headed for the United States.

The two main routes taken by Metis caravans were the Montana Route and the Kansas Route. Which trail settlers would take depended largely on how equipped they were for the journey. Those with less supplies took the Montana Route to stock up in Calgary, and those with more took the Kansas Route and stopped in Kansas City. A handful of Metis visitors to Kansas City stayed behind, and settled in Northeast Missouri, in what is now called "Michif Country". A second offshoot from Kansas City settled in Louisiana, home of another French-descended people, the Cajuns. In 1889, the Metis Nation of Oklahoma became a federally recognized tribe. There are currently over 110,000 Registered Metis in the United States, compared to just 1,500 in Canada. 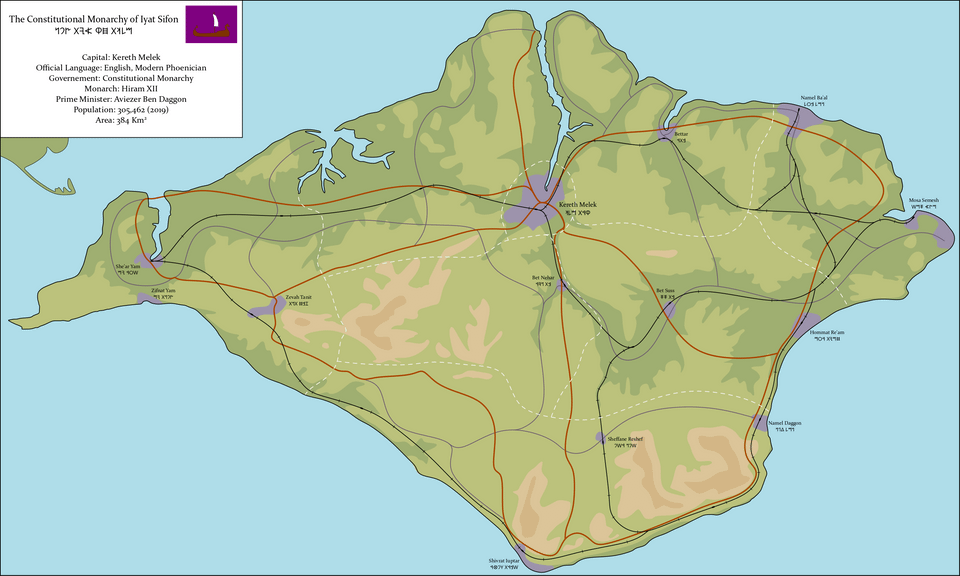 The Constitutional Monarchy of Iyat Sifon is the last Phoenician colony. When the Phoenicians traveled and colonized the Mediterranean, a small group has sailed through the strait of Gibraltar and headed north. They arrived at the isle of Wight, named Iyat Sifon (Island of the north) by the group, where they settled and built a colony. By the time Julius Caesar started his campaign to conquer great Britain, the Phoenician colony in Iyat Sifon was strong enough to keep themselves from falling into Roman hands.
Since then, the Kingdom of Iyat Sifon has kept it's independence through negotiation and trade. For hundreds of years they sailed the trade routes of the English Channel, the Northern sea and later - the Atlantic ocean. During the 15th century, a parliament was established and in 1472 the Kingdom's constitution was adopted.
During WWII, the small kingdom aided the allies by sending ships to evacuate the troops from Dunkirk, and later by helping with the preparations to the Normandy landings.
Today, the small country is a member of the EU, and most of the country's economy is based on sea-trade.

Washington D.C., April 25th, 1966
Lyndon Johnson was overlooking papers in his office detailing the recent expenses from the war when there was a knock on his door.
"Come in."
Into his office stepped Richard Helms, head of the C.I.A., and he was out of breath and looked flustered.
"Mr. Helms, what brings you here, and why do you look out of breath?"
"Well Mr.President, you might want to see this."
Helms placed a rather hefty envelop stamped top secret on the presidents desk. Johnson placed what he was initially looking at to the side, opened the document, and began reading; Strange soldiers in gas masks, robots twice the size of a man, occult practices, mass cloning and breeding programs.
"A little late for the April Fools jokes isn't it Mr. Helms?"
"As much as I want to agree with you sir, I'm afraid this isn't a belated April Fools joke."
"Do the Soviets know about this?"
"Actually Mr. President, the Soviets were the one's who told us about this."
President Johnson sat at his desk in silence, clearly processing what he had read and what the appropriate response would be.
"Get me the Kremlin." 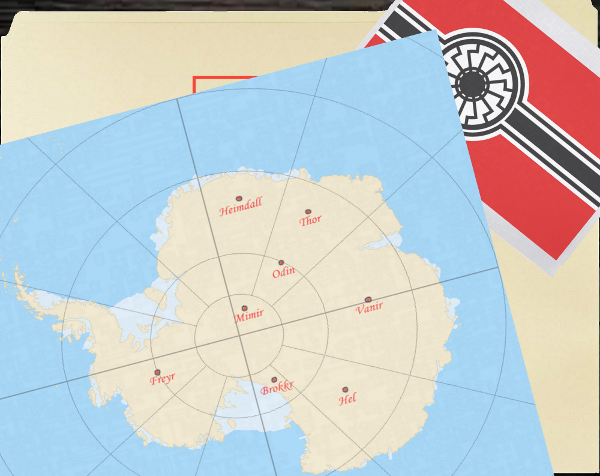 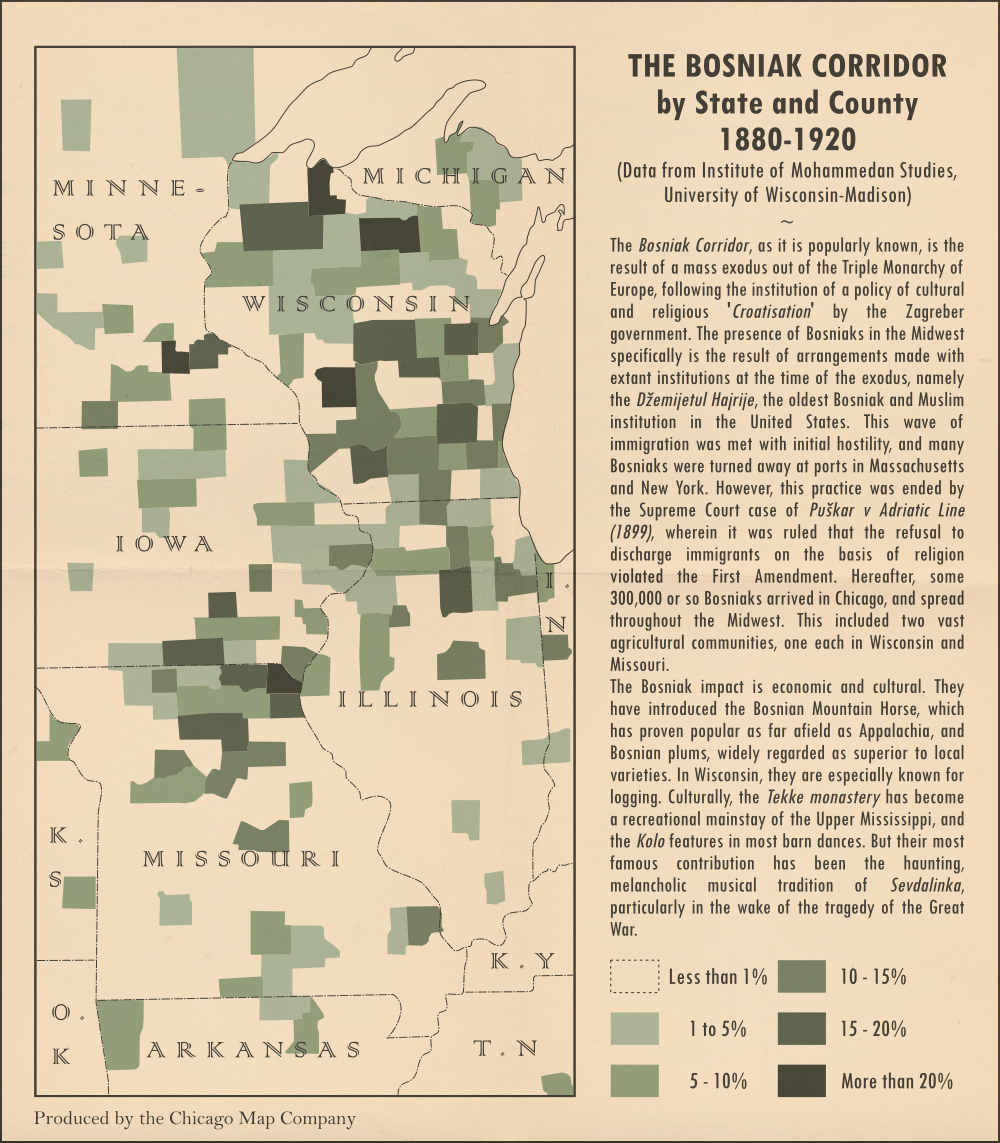 ~
​
The POD lies in the Treaty of Berlin following the Russo-Turkish War of 1877-78, wherein rather than gain nominal control over Bosnia and Herzegovina Austria formally declares its intention to occupy and annex the region in light of the Herzegovina Uprising, for 'reasons of maintaining the southern frontier'. This effectively has the same result as IOTL, souring relations with their Balkan and Russian neighbours. However, it also creates the impetus for Croatian nationalism, and after much hand-wringing about a repeat of the Hungarian Uprising some thirty years earlier the Kingdom of Croatia is created at the expense of the Hungarians (Always a good thing so far as Vienna is concerned).
Predictably, the Croats copy the Magyarization policies of Budapest and this upsets a great deal of Muslim Bosniaks, who in turn emigrate en masse to the United States, the details of which are explicated upon in the above map. I hope you enjoy!

Note: This was originally going to be more complex with crosshatching and the like, but the SVG file corrupted, which is disappointing.

Hi, this is my (quite litteraly) little contribution to the MofT contests, it's been a long time ! I'm sorry it's so tiny (I didn't have a really good basemap) but I'm quite proud about the style ! 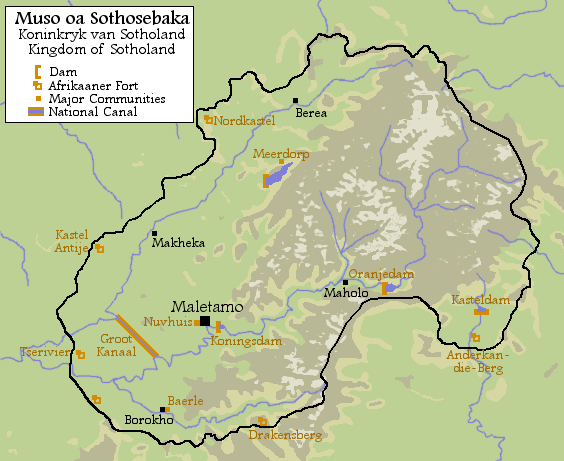 This is the map of the touristic places of interest concerning Afrikaaner culture. The Afrikaaners are the descendants of Dutch and Huguenots settlers in the Cape Colony. Even before the Cape Colony was taken by the British Empire, Afrikaaner sentiment had generated several protests against the rule of the Netherlands. However, it was in 1804, with the invasion of the Cape Colony by Great-Britain, that Afrikaaners truely came together as a community, and the 25 000 Afrikaaners took their possessions and left their homes, to march towards the North.

On their way, they faced dissensions, fought with several local groups such as Zulu raiders, until they met another group that was under Zulu and British threat: the Sotho Tribes of King Moshoesho. There was at first defiance, as both groups had lost the habit of meeting foreigners without hostility, but they eventually came around, thanks to the help of missionaries who apeased the discussion. Both people agree to entrench themselves in the mountains that became today known as Sothosebaka Mountains, "The Place for Sothos".

Afrikaaners were able to make themselves useful by their literacy, knowledge of firearms and the cattle and cultures they brought with them. The missionaries gathered support from their communities in Europe, bringing technical assistance such as engineers and doctors. Both King Moshoeshoe's Court and the Afrikaaner convoy settled in Moyeni, that became Maletamo. The Afrikaaners founded the village of Nuw Huis, New Home, and were soon dispatched by the King to create forts in the most strategic places.

With time, as both the British Empire and the Nguni kingdoms settled and renounced to attack, the Kingdom of Sotholand saw the Afrikaaners evolve from a caste of soldiers and war engineers to a sort of middle class, seen as equal but different by the rest of the society. This situation intensified until Afrikaaner districts became a thing in every town of more than 2 000 people. This situation, known as "apartheid", was described by contemporary King's advisor Jan Roseterre as "a feeling that we were convenient, but not appreciated". Afrikaaners lived in the material comfort that comes with jobs such as doctors, teachers, secretaries or engineers, but were mostly left out of both popular and aristocratic events.

The situation reached a peak of tension after Prince Mahole married an Afrikaaner nurse in 1937, causing great scandal at first but finally giving a space for the Afrikaaner and Sotho people to discuss this problem in a healthy manner. Since then, Afrikaaners and Sothos have been intermarrying more freely, and small Afrikaaner neighborhoods have disappeared. Historical communities, such as the people of Meerdorp who built the first barrage of the country, have however kept a strong identity. Since 1952, education most be bilingual from the age of seven, in order to ensure that both languages will be understood through the whole country. In 1998, Afrikaaner become the second official language of the Kingdom.

Today, the people who identify as "Afrikaaners" still represent 17% percent of the population, and are the first minority of the country. One can experience the atmosphere of the old Afrikaaner neighborhoods, visit the historial forts, hike in the vineyards of the countryside and enjoy the impressive architecture of the dams and canals. The vibrant industries of tourism, music and animation are today helping the country getting some of the recognition it deserves as a truly unique cultural treasure.


Brochure from Afrikaaner Culture Center.
You must log in or register to reply here.
Top
Top