"Most Interesting Scenario To You" Redux Thread

Welcome to the "Most Interesting Scenario To You" Redux Thread.

Inspired by the original "Most Interesting Scenario To You" thread, I had decided to revive the idea for a second time. (Notwithstanding the fact that the original thread is one year old now.)

Just as in the original thread, the rule is simple: Describe an interesting alternate history scenario that you are infatuated with. You can post anything with your heart's content.
However, I'll issue two ground rules for this thread:
1. The scenario(s) must be before 1900.
2. The scenario(s) must not be ASB.

Let's commence and christen the thread, shall we?

I'll start, my favorite alternate history that I'm infatuated with is the "Yankee Dominion" trope. The scenario is when the thirteen American colonies becoming a British Dominion with their separate at-home parliament.
Last edited: Apr 6, 2021

Here's some of the scenarios that I'm infatuated with:

ramones1986 said:
Here's some of the scenarios that I'm infatuated with:

PS:
Is ASB-related scenarios counted as well?
Click to expand...

To answer your PS, no ASB scenarios. I happened to left it out I believe on purpose.
There's your clarification anyways. Hopefully, you and everyone else will understand by then.
Edit: I added the "No ASB Scenario(s)" rule now.
Last edited: Apr 4, 2021

Any and all better bet for Africa scenarios

Although judging by the number of responses I got, "Mongols!" for an alternate-ethnolinguistic British Isles might be a winner as well

Scheele discovers nitroglycerine which he relates to Lavouisier; the latter and his assistant du Pont refine it into dynamite. The Frebch Revolution proceeds on schedule: and after the Tullieries incident, a mob breaks into du Pont's print shop, stealing his presses and taking his papers. Soon after, a Manuel d'Anarchie is published which includes his formula for dynamite. Also, George III is assassinated by Margaret Nicholson, giving George IV on the throne and Fox as PM as the French Revolution continues.
Last edited: Apr 4, 2021

In all seriousness though (Mongol Britain doesn't count ), I've gotten a little obsessed over the past couple months over a surviving Napoleonic French Empire/Rheinbund/Italian "satellites"... only without Nappy himself - too much on the road to self-destruction Let's say he makes a horizontal departure of some sort sometime between 1810 and 1812...
Trying to figure out exactly what the succession would be for France, Holland, Westphalia, Berg, etc though is a rather nasty rabbit-hole to go down

Plantagenet Aquitaine evolving to an independent state.
Byzantines and Sassanids being crushed by the Muslims.
Last edited: Friday at 11:01 AM

As a lover of American history mine naturally are about the US. Mine are:

What if the American Revolution went different where the South stayed loyal while Canada joined the rebellion? (There's been a few TLs about the idea)
I've always found it interesting to imagine an OTL southern United States that is like a Canada analogue, but naturally with southern culture. I would love to see a graphic TL like "Our Fair Country"/"These Fair Shores" but with the South rather than New England.

What if it was the North that seceded rather than the south?
In a scenario like this, I imagine England and France would be much more likely to intercede rather than OTL.

What if America was unstable and had a lot of coups and civil wars a la Mexico style?
Honestly in this scenario, the US would likely collapse in my opinion. Would also be cool if like Mexico became the preeminent North American power and potential super-power.


Anyway, just some ideas I've always loved to ponder and think about. Unfortunately, I've haven't felt confident enough to start my own TL yet, but maybe someday I'll tackle one of these ideas.

(in no particular order)

Implying we are not living in one

For myself, I love the idea of Federalist Bolivar and a more united Latin America

I have some "normie" ones like a surviving Byzantine Empire or greater Mongol conquests, but here are some others:

Tudor France, but no Tudor England... maybe make the Valois just die out and the last King declares the Tudors their heirs?

CommieScum said:
Implying we are not living in one

For myself, I love the idea of Federalist Bolivar and a more united Latin America
Click to expand...

-Indonesia if Prince diponegoro succeed in the Java war
-nepal under waldemar of prussia (thanks @Sārthākā for enlightining me on this)
-possibility of a 3rd opium war
-america annexing kamtchaka (there is plan to sell kamtchaka to america and some part of siberia)
-russian involvement in the american civil war (on the union side)
-an independent transvaal,orange free state and zulu
Thats the only few i can think of

ASB is thrown at everything too lightly.

Any scenario where Europe is hella screwed and the rest of the world gets a massive wank.


Give me a world where the scientific method is first systematized by Islamic scholars, where the earliest factories and railroads are built in Bengal, with philosophy pioneered by the Chinese and where the first man and woman to set foot on space hails from the New World.


Much of the modern world we live in is shaped by Western traditions and institutions. I live in a non-Western country and yet we use English as our main form of learning communication in school. We listen to Western pop music, watch Western shows, and buy Western-made jeans. We follow the teachings of the Catholic Church, and while it's origins lay firmly in the Holy Land, it is the heritage of Europe, and Western influence manifests itself most in the portrayal of Jesus as a White man in Church paintings and dioramas.

I'd like to see the opposite of that; it is the most "exotic" and "unfamiliar" to me. You can swap out English for French or Spanish as the global lingua franca, and while there are certainly going to be some differences, the dominant global cultural civilizational influence will still hail from Europe. It's frankly boring and bland. It's what I live and see every day.

Rfl23 said:
-Indonesia if Prince diponegoro succeed in the Java war
-nepal under waldemar of prussia (thanks @Sārthākā for enlightining me on this)
-possibility of a 3rd opium war
-america annexing kamtchaka (there is plan to sell kamtchaka to america and some part of siberia)
-russian involvement in the american civil war (on the union side)
Click to expand...

I brought the Kamchatka thing up in a thread last year. I couldn't remember any of the details, exc that it was in the 1920's or so....

Alamo said:
It was Washington Vanderlip (no relation to the banking magnate). He was negotiating with Lenin in the early 20s for the following concession, under a long term lease: 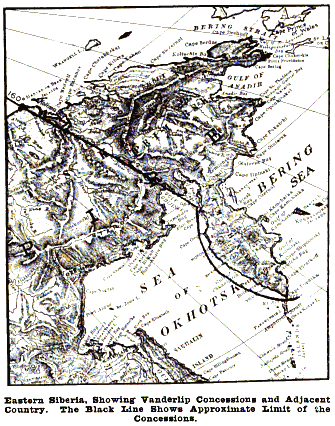 -an independent transvaal,orange free state and zulu
Thats the only few i can think of
Click to expand...