Greetings, map-makers! Your Map of the Fortnight challenge this time is:

... shall always be ours. Make a map showing the irredentist claims of a country in an AH scenario.


Wikipedia said:
Irredentism (from Italian irredento, "unredeemed") is any position advocating annexation of territories administered by another state on the grounds of common ethnicity or prior historical possession, actual or alleged.
Click to expand...

Provided the country is in an AH scenario then it's okay; the country itself doesn't have to be one that didn't exist in OTL.
​

This round shall finish on Sunday, 4th of April.

!THIS THREAD IS FOR POSTING OF ENTRIES ONLY!

Any discussion must take place in the discussion thread. If you post anything other than an entry to the contest here you will be disqualified from competing in this round of the contest.

Well, seems like I'm always the first to post in MoF threads, no reason to break the streak now...

Mexico, 1861. The Conservatives win the Reform War, and a militarist, nationalist government takes over. With the US embroiled in its own civil war, the regime looks north, hoping to gain prestige and legitimacy by invading the American Southwest (or the Mexican North, depending on who you ask). This is a propaganda poster put up by the regime (which uses a combination of these two flags, by the way: 1 and 2). If Google Translator is to be trusted, the Spanish reads "It is ours by right of blood! Mexicans! Recover your land! Upper California, Texas and New Mexico are yours! Enlist and support the war! Ministry of Education 1861" 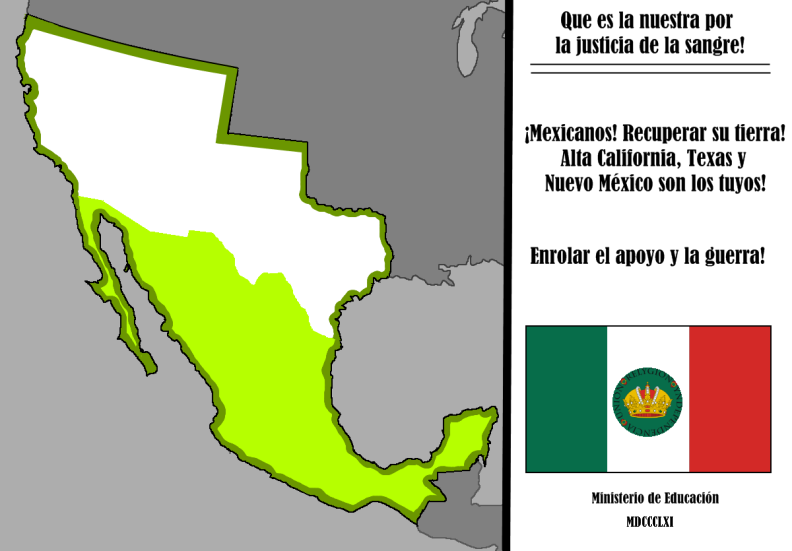 Donor
I decided to go for the obligatory Balkan irrenditism (in particular from my own TL 'A King's Choice') so to make up for this, it's 8 maps for the price of 1! (note, I consider this one map split into 6 for easier reading. If this is considered unfair, PM me and I'll whittle it down to Ruthenia.)

In essence, the reason for the claims are as follows:

On the background map, it's possible to see the Slovak war of indpendence, the (undeclared) Bosnian Civil War and minority risings in Hungary, Slovakia and Ruthenia. Dotted line vs. full line Slovak border depends on whether the movement recognises Slovak Independence. 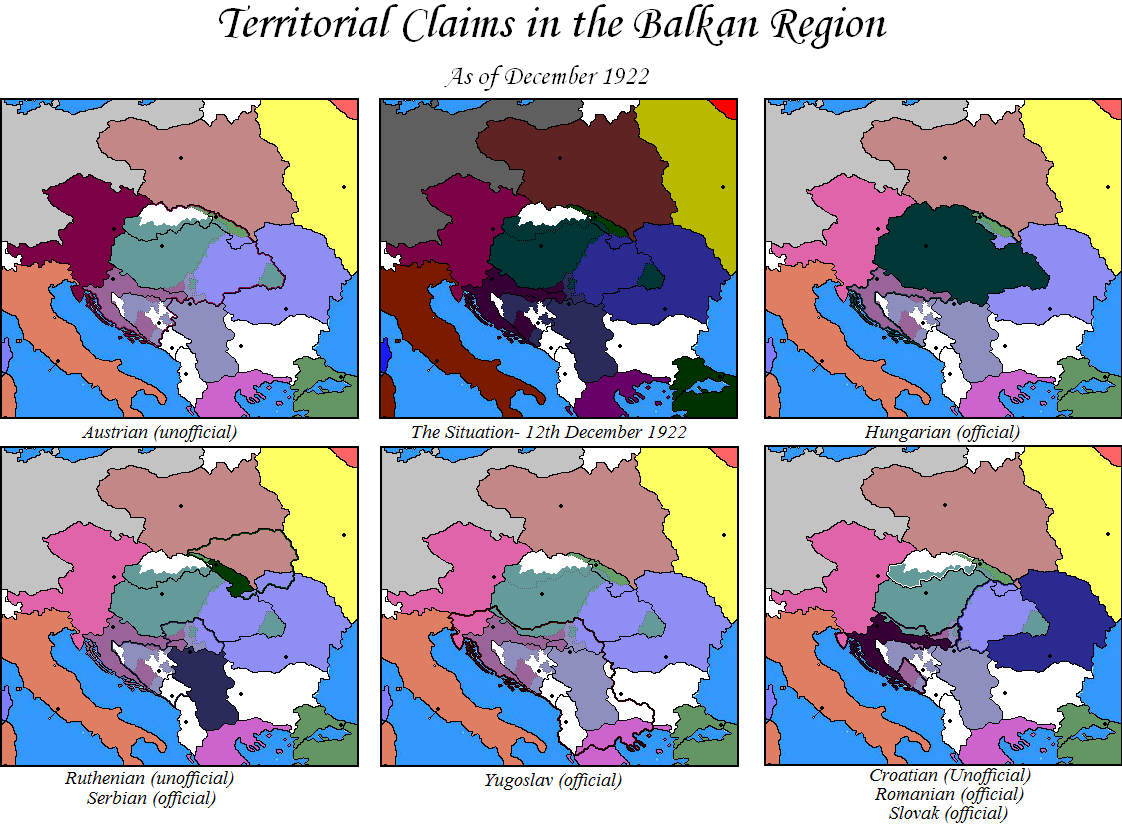 Hope this counts. Following WWIII (2025-2028), the majority of the worlds countries begin to form megacountries and economic/military blocs. Over the rest of the century, peace is felt all over the globe, for the most part. Cold War tensions do brew from time to time.

The map depicts the breakup of one megacountry, the Atlantic Union. While still at its territorial height in 2095, it had long ago been overshadowed by its competitors. 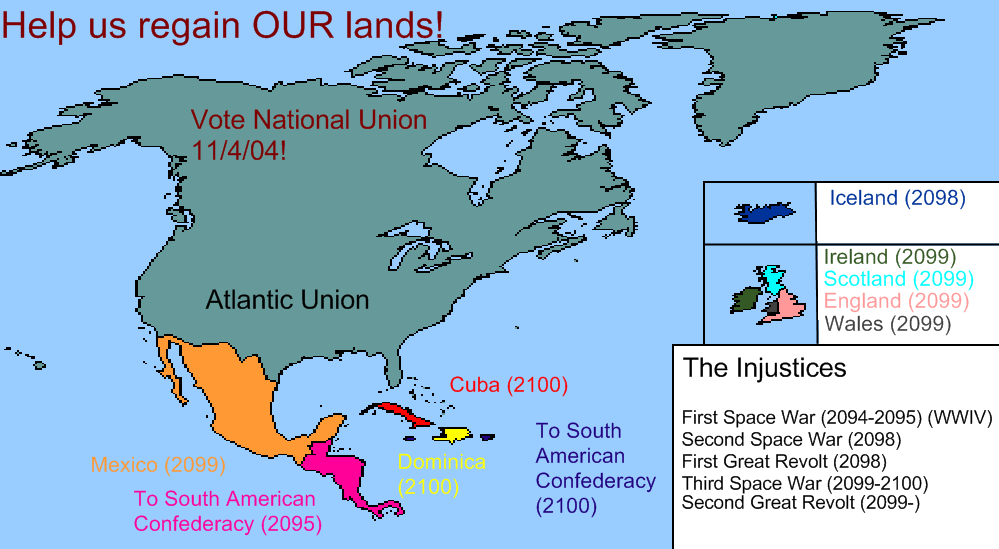 Donor
Here's my entry. The scenario should be familiar to all of you - Turtledove's TL-191. 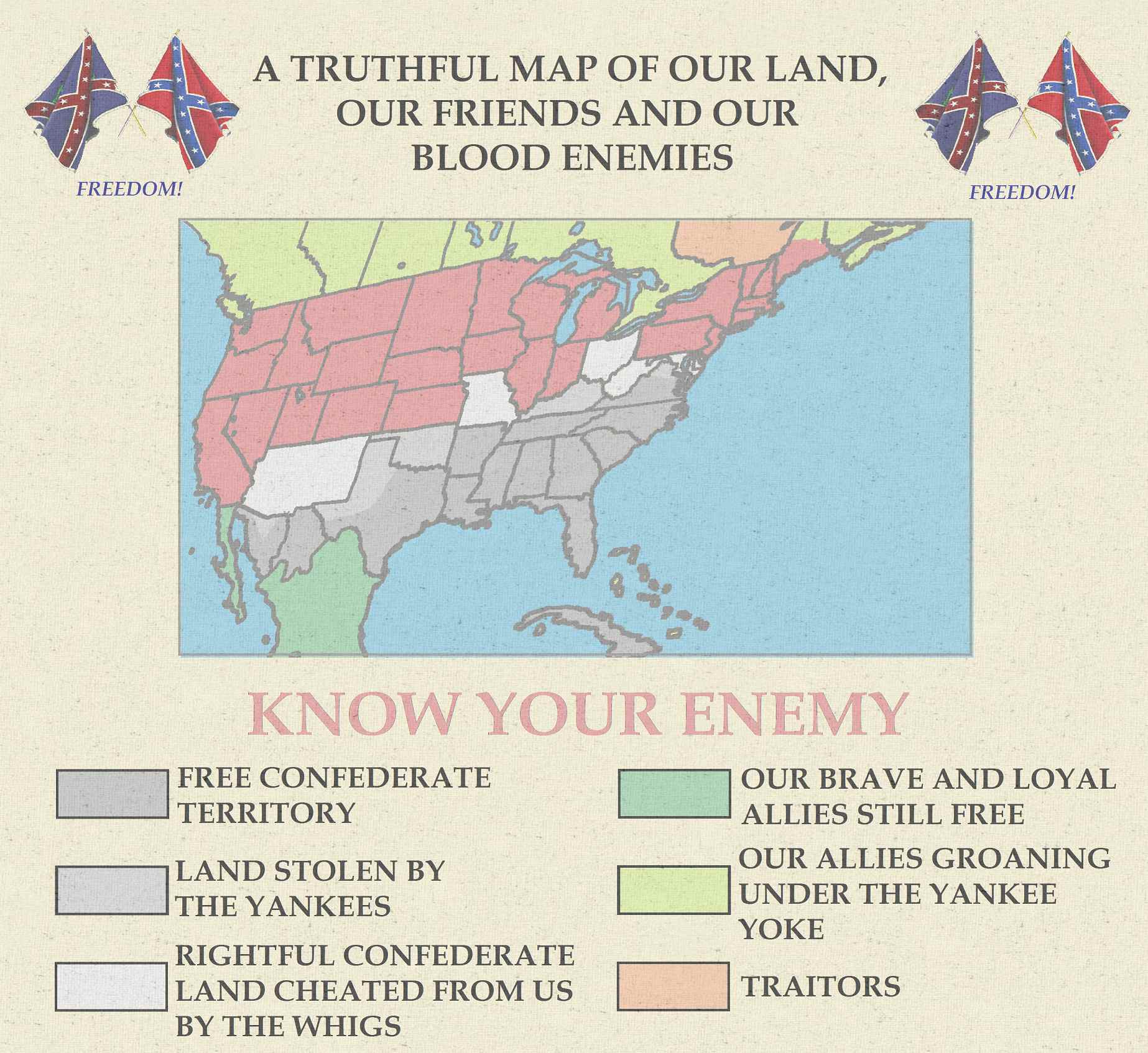 Napoleon and his descendants did much, much better than OTL. Still, every great empire must fall, in time... 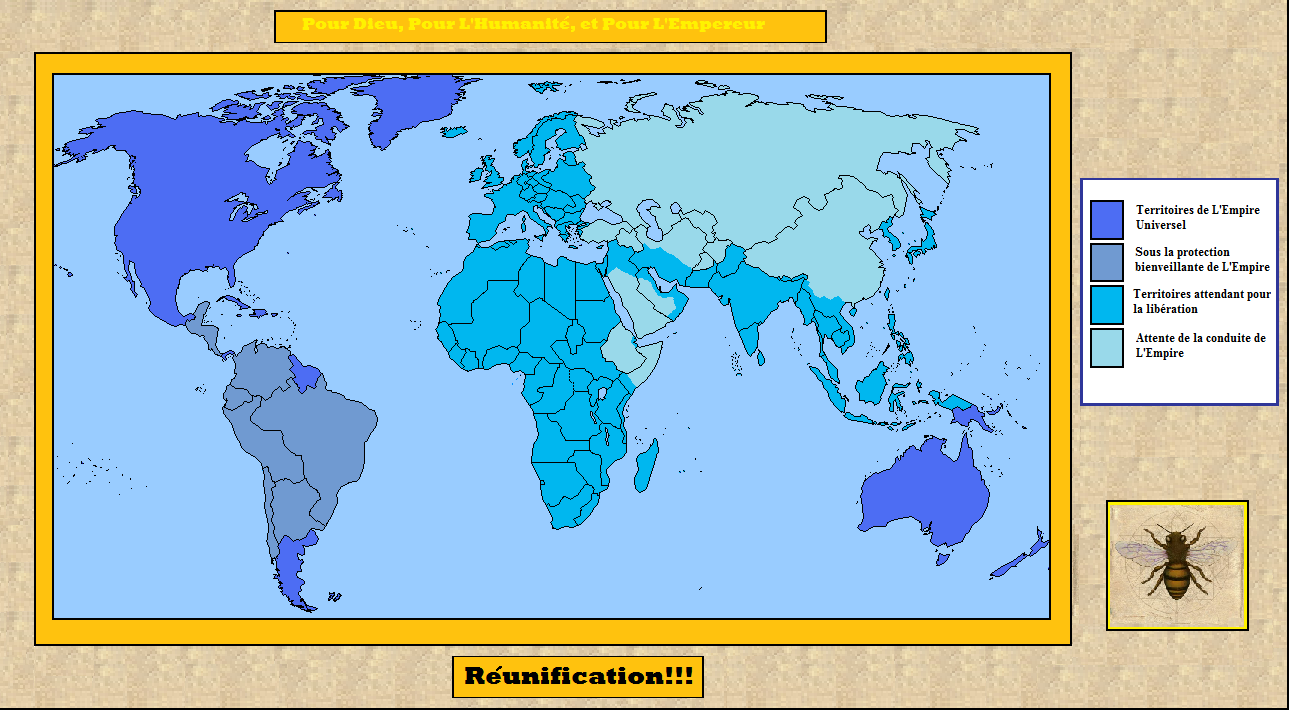 ETA: The claimed lands are divided up according to the country which administers them, showing how the rightful Polish lands have been shattered. Warmia, Masuria and Powiśle (southern East Prussia) and Upper Silesia are part of Germany, Gdańsk/Danzig is a LoN Free City, Galicia is independent, Cieszyn/Teschen, Orawę/Orava and northern Spisz/Spiš are part of Czechoslovakia, Podalia and Volhynia is Ukrainian, Grodno/Hrodna and Minsk is part of the White Russian region of Russia and finally Vilnius is Lithuanian.

ETA2: Thanks to Magnificant for correcting the Polish. 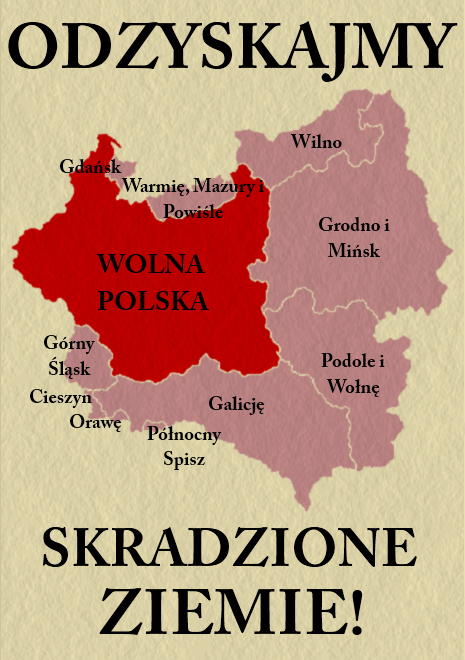 The text is in Swedish and reads: Brothers in Union! Invincible! Vote for the greater Fatherland!
Vote for the Young Scandinavs!

Actually Fosterland doesn't reallt mean Fatherland (that would be Faderland), but I can't come up with a better translation for it... 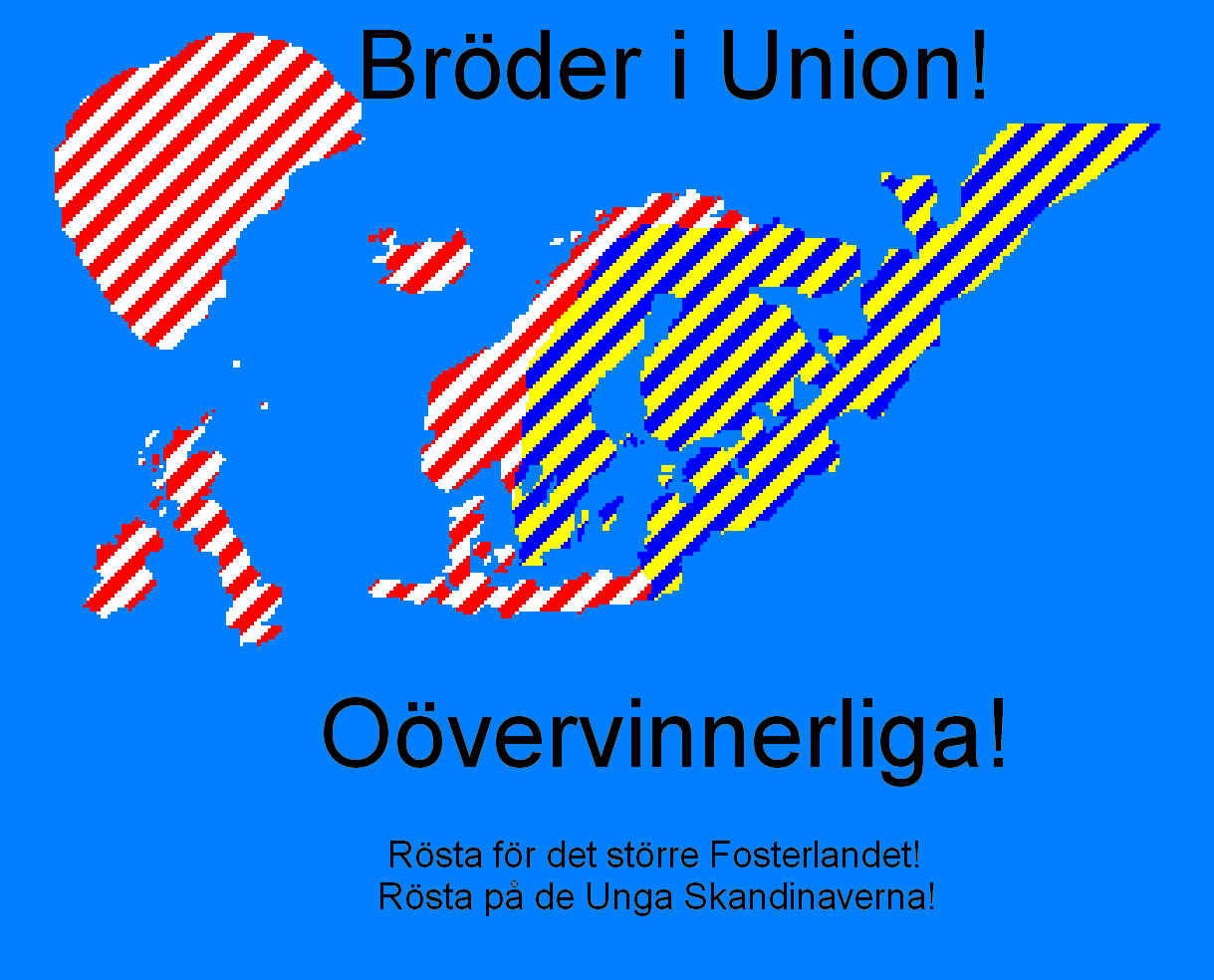 This contest is now closed! The poll shall be up shortly.

Edit: The poll is up!