And yeah, I've been to Delaware a few times so I know the score. The Don of Atlantic City is supposed to be a descendent of this guy: https://en.wikipedia.org/wiki/Nicodemo_Scarfo

The mention of gunpowder reminds me Lord Kalvan of Otherwhen which had a feudal North America. Where while gunpowder existed it was controlled by a religious order who used their monopoly on it control the various feudal kings and princes. There was actually something similar in the heretic novel where the priesthood were the ones responsible for the production of rifles with production being highly restricted and any deviance from designs being deemed heretical.

I've written this as a way to bridge the gap between my vision of Novio Giorsi and Flashman's idea of them as part of the rump USA and Non Denom but still mafia run.

The Chastening of Novio Giorsi

Since the Regression, Novio Giorsi had been effectively independent. The mafioso Dons and their loose organization of city states had enough muscle and wealth and DC was weak enough that they could do as they pleased. But the power of the vestigial US waxed and waned, and until Don Scarfo's raids on Delaware and the Scardino crew's sacking of Bethlehem, Pennsylvania, Washington had been alright with ignoring them. The DuPonts were close vassals of the President and Congress in Washington, not far at all, and the rump US consistently held power over Delaware, Maryland, and some of northern Virginia, while its influence over New York, Long Island, New England etc. often was tenuous and distant. The Governors of Pennsylvania and Delaware went to demand better protection of the President and his court.

Non Denominational minister clerks and FBI inquisitors pored over ancient legal scrolls in the Library of Congress and found the cassus beli they needed. The RICO Act, or Racketeer Influenced and Corrupt Organizations Act. Since Washington still claimed authority over all states, they could say New Jersey/Novio Giorsi's state government was a racketeer organization, which, by all old pre-Regression definitions, it was. So, knights and footsoldiers from the vestigial United States, Pennsylvania and Delaware were amassed into an army and American ships usually used for trade and official transport to New England or Long Island were loaded with them and the armed column marched through Pennsylvania to Trenton and crossed the Delaware, while the ships sailed to Atlantic City to land forces to demand the submission of Don Scarfo, then after a battle upon the docks where men of both sides were slain, Don Scarfo was killed with an arrow to the neck. Then the ships and soldiers met near Hoboken, with auxiliaries from resentful Jackson Whites they met marching along old Route 46. They demanded the Commission appoint a proper governor, acknowledge the suzerainty of the President and Washington, and make the Non Denominational Church official, rather than the Catholic Church. The Dons met for an omerta council in secret with their consiglieres. After some hours passed, they reluctantly agreed to these terms, except one, the Don of Caldwell, who denounced the others as "rats for the Feds".

The mafioso still held power in New Jersey, The governor was selected by the Commission and daily life changed little, but the Non Denom church gained more power and the culture became less Italianized and more like the rest of feudal America as years passed. 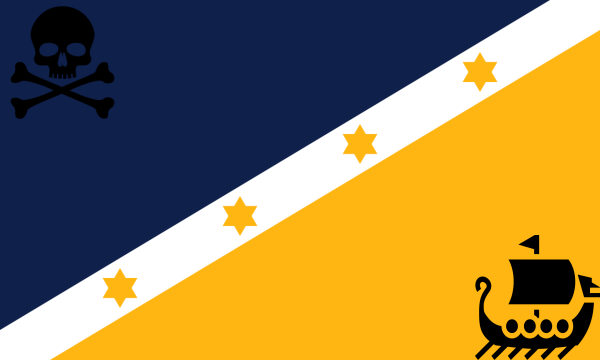 When the tribes and chiefdoms of Laska coalesced together during the mini ice age of the 2300s, it was under the rule of three warlords: the Governor of Juneau, the Mayor of Anchorage, and the Admiral of Baranoff. The Governor was to be the first among equals and spiritual mediator, the Mayor to be the master of all land-based combat, but it was the Admiral of Sitka Island that was to be master over the grand fleet as it struck all the way down to the warring states of California.

Over time the tradition of the great raids has subsided, leaving the old political arrangement queer and outdated. Isolated Juneau grows increasingly irrelevant, overshadowed by Ankrage and her new President. The upstart Ketchikan has finally broken the lie of the "Three Rulers, One State" system, quickly rising to heights of power with their alien religion. The lie is no less exposed in the Admiralty - no longer grandiose in well-tailored uniforms, the Admiral and his Grand Captains are a rag-tag mix of fishmongers and pirates.

The Admiralty's lands cling to the outer edges of the Alzander Archipelago. From here, they control a few vital straits and passage ways from which they exact tribute and booty. Meanwhile, trawling fleets brave the dark and stormy waters of the northern pacific to bring in rich hauls. Most famously, the men of Baranoff are accomplished whalers. Today, it is by far the weakest of the four main powers of Laska. It does have by far the best understanding of ship building, and they are the only sailors that are able to reliably brave the outer passage of the dark sea.
Click to expand...

Hey flashman when are you going to update the threadsmarks
Last edited: Feb 10, 2021

reagan thomas hayden said:
Hey can someone please make a game mod for this timeline in say crusader kings or some other paradox games
Click to expand...

Ever heard of Crusader Kings II: After the End?

pattontank12 said:
Ever heard of Crusader Kings II: After the End?
Click to expand...

To be honest no

reagan thomas hayden said:
To be honest no
Click to expand...

literally this but less pop culture references and less serious for a Map game
Threadmarks
Reader mode
You must log in or register to reply here.
Top
Share:
Share
Top