As someone who lived in Ohio, agreed. Very unique and striking, absolutely worth keeping precisely due to that.

We aren't beholden to follow every bit of the minutia of White's original project. While we shouldn't change too much about the fundamentals of the project, a country's flag is small enough that it can be changed without issue.

Whats left before the feudal heartland?

Other than maybe the Islamic nation in Colorado I don't think there's much in the Great Plains to talk about.
Deseret Flag 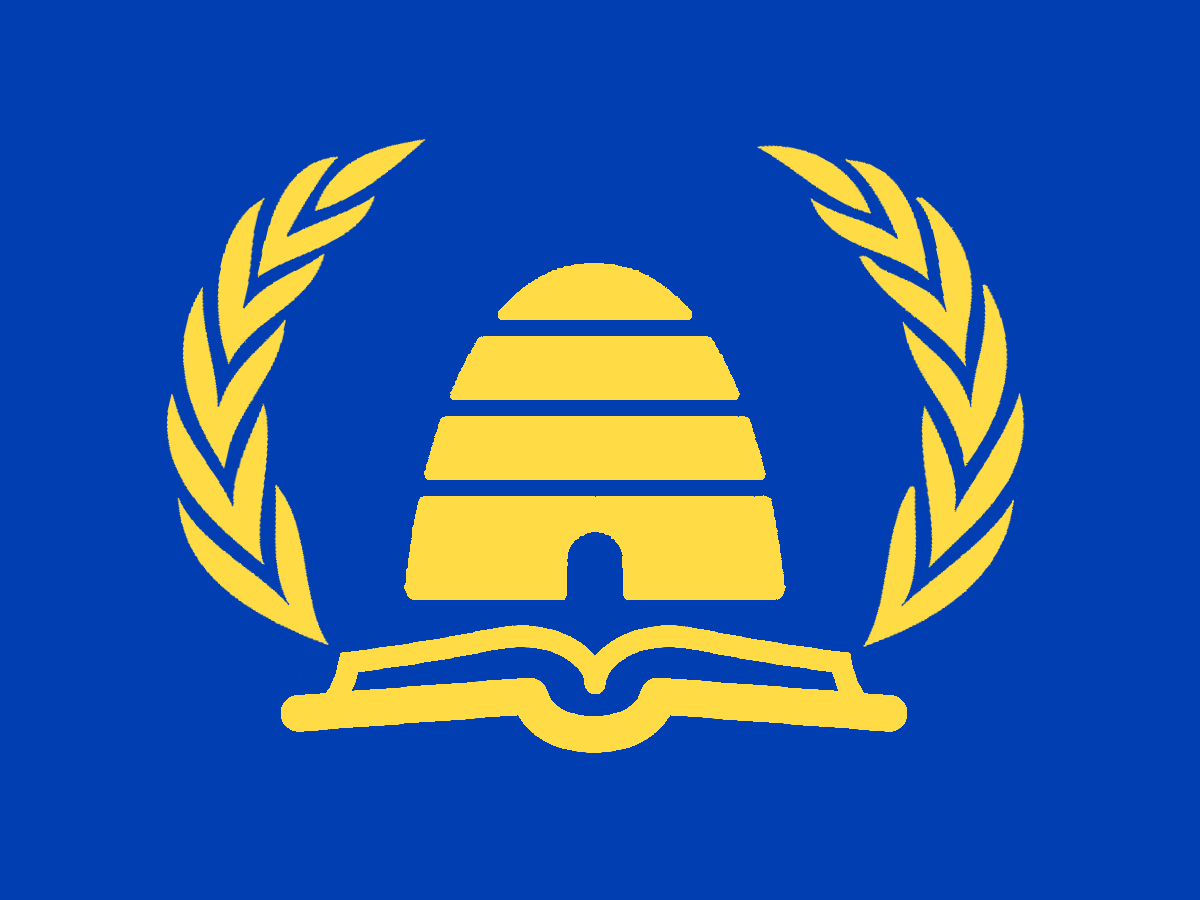 I just got an idea, how about we post a google map of a city that may survive the apocalypse, and end up as a prominent city in the medieval america world (salt lake city for example), and we make a hypothetical map of the city layout (streets, city walls, palaces, remains of an pre-regression building, etc).

thestickfigure said:
I just got an idea, how about we post a google map of a city that may survive the apocalypse, and end up as a prominent city in the medieval america world (salt lake city for example), and we make a hypothetical map of the city layout (streets, city walls, palaces, remains of an pre-regression building, etc).
Click to expand...

White actually did this with Richmond

Flashman said:
White actually did this with Richmond
Click to expand...

Is a church supervisor simply a city that supervises the church or just a giant church?

I think that unless we're intent on further exploring the culture of the Great Plains cowboys I think it's about time to move on to talking about the nations of the eastern Heartland and Great Lakes regions.

Limabot said:
Is a church supervisor simply a city that supervises the church or just a giant church?
Click to expand...

I think its like the head of the church for a particular state. Second only to the Supreme court in DC

I'd be curious, based on the East Map, if the Capital District/"Albany" city-state, Adirondack/Lake Champlain/"Plattsburgh"/"Burlington" city-state, and Hudson Valley/"Poughkeepsie" city-state just to the west of the New England city-states are now considered to simply be part of New England in ethnocultural terms. I'm quite willing to say yes due to them being so Yankee-ish in everything but name in modern daily life, particularly when compared to their neighboring bits of New England Proper to the East.

A very vague parallel to eastern NY becoming part of New England Proper in my eyes would be Mycenaean Greece gradually overwhelming coastal Caria and the Troas in terms of colonists and culture and turning them into Doris-in-Asia, Ionia, Aeolis, (Greek) Troas, etc. to where these are seen as quintessentially "Greek" as mainland Greece's Attica, Laconia, Thessaly, etc. are for the next couple thousand years.
Some Notable Cowboys pt 1

Martin "The Mountain" Sifton
Early on in the new medieval ages around 2370, the Cochrane Tribe was in big trouble. Their rivals the Nelson Tribe of the Bow River had smashed their main force the fall before and a harsh winter had killed off half of their tribe. Outnumbered 2 to 1 and surrounded, the tribe was doomed. Seizing the opportunity Martin Sifton, a young cowboy major, challenged the aging Colonel of the tribe: Jon Cochrane, his two sons Al and Mike to armed combat for leadership of the tribe. However he was no ordinary cowboy. He was gifted with a giant physique growing to almost 7ft tall, so large he rode a Desereti Warhorse like a common pony. He was not even 14 years old when he claimed his first scalps and was allowed to wear eagle feathers. During the armed duel Martin lost half his draw hand to Mike's sword. Not soon after Martin sliced off Mike's left arm and then his head. He finished the duel by pressing his thumbs into Al's eyes and blinding him. Later Martin would mutilate Al and keep him around as his fool for several years before finally tiring of his presence and beheading him. With his victory, Martin was able to seize control over the formerly Cochrane now Sifton Tribe.

Taking decisive action at first thaw, Martin raided the Nelsons and in the chaos, led his tribe away from the Nelsons and through the Banff Pass and into the Rocky Mountains. With Dan Nelson and half of his tribe hot on their trail they abandoned their wagons and continued only on saddle. Those would could not ride were abandoned and the tribe pressed on. Travelling through the various passes Martin was able to set a trap for Dan Nelson. Dismounting and positioning his men on the side of a mountain, Martin was able to ambush Nelson and capture him. Amputating Dan's bow arm, Sifton sent word to Nelson's eldest son Jack to treat. Knowing that Jack would attempt to kill him and take his father back Martin doubled back and lay in waiting above one of the mountain passes Jack Nelson would have to navigate.

For a quarter moon he waited and the day Jack Nelson walked through that pass he was doomed. As Nelson made camp, Sifton and his men rode down onto the unsuspecting cowboys and slaughtered them. He captured Dan Nelson's only daughter Kate and took her as his wife. Her dowry? Nearly all the cattle of the Nelson tribe. In exchange Martin was generous, he would give Dan a painless death and allow Dan's last surviving son Roy to live provided he never set foot north of the Missouri ever again. Martin fathered a dynasty on Kate Nelson, one that at it's peak managed to put all of Alberta, Montana and Saskatchewan into vassalage and had a herd numbering in the many tens of thousands. Martin was an avatar of war, conquering much of Alberta. At the time of his death, his war bonnet contained almost 100 feathers, added whenever he smashed an enemy force.

The Macleod Tribe: Across the Rockies
When his brother died at the hands of Pat Sifton, Irvine Macleod and his tribe were trapped and had nowhere to flee. Pressed up against the foothills of the Rockies Irvine decided to copy Pat's father and ride into the mountains hoping to try his luck beyond Crowsnest pass. Pat Sifton didn't take the bait though. He knew what his father had done and stationed several men to watch the pass to notify him when the Macleod's returned. Summer turned to fall and Irvine Macleod could not wait any longer. He could not return to the plains and so he pressed deeper into the mountains. He was after a mythic land to the cowboys, an oasis in the mountains, Columbia. Wandering south, he prepared his tribe and their livestock to wait out the winter and then cross the remainder of the Rockies when the snow melted. The winter was particularly harsh, the snow burying the cowboys in almost 3 ft of snow, killing much of their herds but preserving the meat. When spring arrived later than usual, the Macleods set out for Colombia. Stumbling through the mountains they reached the border of Columbia after 2 months, half of them dead from starvation or the cold with nearly all their cattle slaughtered for food. Resting up for half a moons turn, the Macleod's prepared to invade Columbia.

At that time Columbia was divided between Mormons in the southeast, Bhuddists in the West and Pagans everywhere else. War and famine the year before and floods from the spring melt made the three factions unusually weak. Irvine Macleod and his tribe exploited their weakness and waged war down the Columbia river. Spreading terror all the way to the Cascades, they were ready to invade the Pacific Northwest until one day they awoke to Mount Rainier spewing fire into the air and ash across the Columbian Basin. When the ash poisoned their horses and irritated their lungs they were weakened. And when the armies of Seattle and Portland arrived to slaughter them, the Macleods were forced to return to Spokane.

Consolidating their rule over the Northern Columbia Basin especially around Spokane, the Macleods slowly converted the locals into New Israelites until several generation's later they were overthrown by one of their vassals. To this day few other cowboys have made it across the Rockies like the Macleods did. At most small bands will make it across. Before the Columbian order unified the basin, the wandering cowboys would be assimilated into Spokanite society or killed. Nowadays they're just killed.
Last edited: May 21, 2018

Very good posts, though minor quibbles: it's "Columbia", not Colombia (I suspect autocorrect at work?), and tattoos would be strictly banned by Judaic law, and besides, they're certainly a graven image.

Flashman said:
Very good posts, though minor quibbles: it's "Columbia", not Colombia (I suspect autocorrect at work?), and tattoos would be strictly banned by Judaic law, and besides, they're certainly a graven image.
Click to expand...

Random question: I assume that the mentions of coffee-growing in the Pacific Northwest are non-canon, right?
Just because of its implausibility.

frustrated progressive said:
Random question: I assume that the mentions of coffee-growing in the Pacific Northwest are non-canon, right?
Just because of its implausibility.
Click to expand...

Where was this mentioned?

Flashman said:
Where was this mentioned?
Click to expand...

the previous thread, I think.

frustrated progressive said:
Random question: I assume that the mentions of coffee-growing in the Pacific Northwest are non-canon, right?
Just because of its implausibility.
Click to expand...

Considering the fact that you're the only one to even mention the word in this thread I'd say that it's non-canon in this thread.
Threadmarks
You must log in or register to reply here.
Top
Top