IIRC Douglas Adam had some tie in with the Pythons .
Will he get involved with Who earlier?
Last edited: Apr 23, 2021

unclepatrick said:
IIRC Douglas Adam had some tie in with the Pythons .
Will he get involved with Who earlier?
Click to expand...

"Twins Of Time was a real effort for me. It was the first and only Doctor Who story I wrote and even though its been common knowledge for years it was a bad experience for me. I had admired Python since it started and jumped at the chance to write a story. I had hoped that it would have been successful enough to start a lighthearted spinoff. Jim Dale as Ford Prefect was ideal. He had that slight off worldliness to portray the role and his film career was slowly winding down.

Graham Chapman was a real arsehole. He had difficulty remembering his lines and would show up for filming late. Obviously now it was his addiction that was the problem but in 1976 I didn't know that. Maybe my own slowness in writing made things worse but Graham was just intolerable. He would constantly say "why do we need two time travellers". I have to give praise to Derrick Sherwin and the editing team for making Graham look half decent but it was a truly sad time. If Graham had been able to control his drinking or even had stopped then he would have been the best Doctor. He was sober for Life of Brian and he was magnificent but in 1976 he was awful and that was the reason why I never wrote another story and it was also why Derrick and April chose to leave 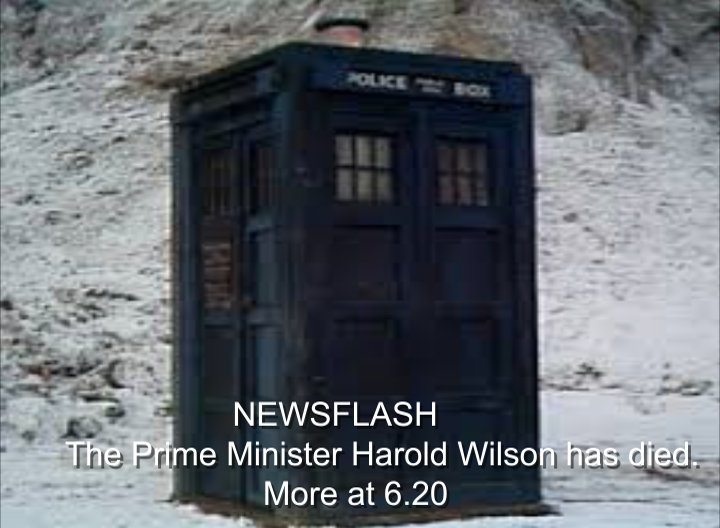 "Jim Callaghan was in the navy during the war and did well out of it rising to the rank of Lieutenant. That discipline coupled with his innate ability to negotiate was to serve him well when he rose to the top of government following the death of Harold Wilson in March 1976. It had been known that Wilson had had heart problems from the early 1970's and had kept it quiet, it was rumoured that he was going to retire in the summer after renegotiating the terms of the UK's membership of the EEC. He found himself falling back on his discipline to keep the fragile coalition with the Liberals alive.

As is so often art imitates life and none more so than with Doctor Who. Graham Chapman's issues with alcohol were becoming more prevalent among the cast and crew of the show. April Walker who played the much loved Sarah Jane Smith left the show at the end of the 1976 series, in public she said it was time to move on after 3 years and 2 Doctors but in reality she could no longer cope with the erratic behaviour of Chapman. Her replacement Vicki Michelle who played victorian Cockney Sally Sparrow only lasted one series because of the coldness on set...

Is that season 12 with or with out Terror of the Zygons?
It was planed for season 12 but had to be delay for budget reason till 13 in OTL

And will you do a summery of the stories in season 13?

unclepatrick said:
And will you do a summery of the stories in season 13?
Click to expand...

Season 12 will be with Terror Of The Zygons

Full Fathom Five:
The Doctor and Sarah are recalled to Earth by UNIT to investigate a series of deaths on an oil rig. The Doctor discovers that the Sea Devils are responsible and is able to persuade the oil company to stop drilling. (4 episodes)

Battlefield: Rutan One
The TARDIS is capture by a Sontaran battle fleet en route to Rutan One in an attempt to end the aeons-old war. (6 episodes)

Hatchery
Landing on a moon in the far future the Doctor discovers a Cyberman incubation zone. He attempts to reprogram them with critical thinking abilities but they are forced to leave when a Cyberfleet arrives. The Doctor rages at Sarah that he doesn't know if he was successful. (4 episodes)

Homecoming
Returning to Earth the Doctor and Sarah uncover a new Auton plot. Sarah meets and falls in love with a fellow journalist and leaves the Doctor. (6 episodes)

nezza said:
I'm afraid I know nothing about Paul Temple.
Click to expand...

Guajolote said:
A co-production between the BBC and ZDF that hit a little trouble. Peter Bryant was brought in to produce during the second series and he persuaded Derrick Sherwin to join him, which necessitated Barry Letts taking over the production of Doctor Who. But if Sherwin has stayed on long enough to be casting the Fourth Doctor, the 70s will have been very different for the show.
Click to expand...

One of the the two things that I know about Paul Temple is that it was a long running BBC Radio series (which is regularly repeated on Radio Four Extra) that had The Coronation Scott by Vivian Elis as its theme tune
The other thing I know is that Francis Matthews who was the voice of Captain Scarlet played Paul Temple in the TV series. This is a link to his obituary in the Gallifreyan Gazette that includes a photograph of Matthews and Ed Bishop at a convention with puppets of Captains Scarlet and Blue... http://kotwg.blogspot.com/2014/06/gerry-anderson-related-news-captain.html

When I looked the programme up on Wikipaeida I saw that Douglas Camfield directed several of the episodes. 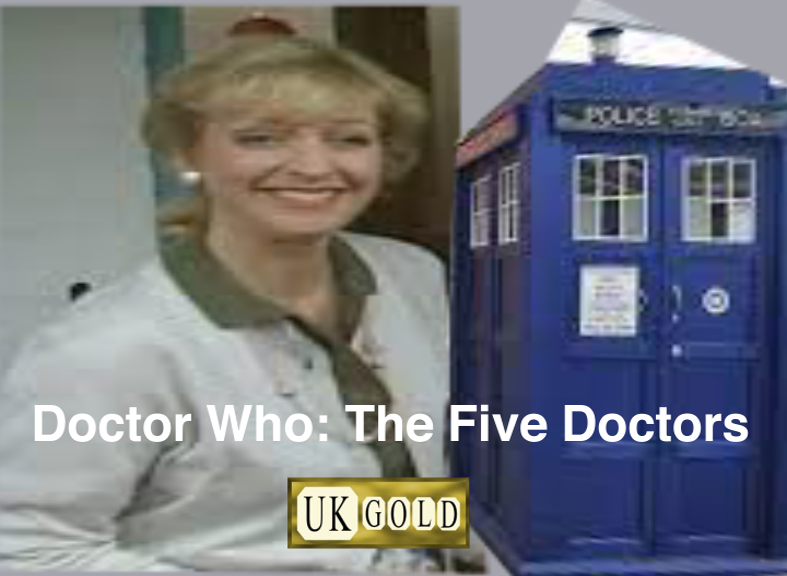 The story of Dr Who in the USA can't be told without Paramount. Graham Chapman's first series had become a huge hit due to syndication along with the Pertwee era stories and Python Mania was growing reaching its peak with Life Of Brian. The US Market was at the time dominated by "the big three" of ABC, CBS and NBC and there had been talk of a "fourth network" for decades. Barry Diller proposed to his bosses at Paramount the idea of a tv channels several yeas earlier. PTS' plan was to launch a Saturday only service at first with its marquee programme being "Star Trek: New Voyages" but Diller had the idea of purchasing the rights to Chapman's third series as Dr Who and pairing it with the further adventures of Kirk et al.

Diller flew to London in early 1976 to discuss the idea as well as a proposal. Paramount wanted to co-produce the show with the BBC with some of the production taking place in Los Angeles...

"Poor Vicki, I felt so sorry for her. At the start of her time she would bounce onto the set every day with that 1000 watt smile and be so excited but within about 2 months her mood had changed. Graham was by this time losing his grip on his drinking and his mood got darker and darker, she tried so hard with Graham as did we all but it was obvious he was lost in his own head.

We were filming 'Sandstorm' and during a break Vicki came to see me in floods of tears. She said 'Terrance I can't cope anymore, he is a nasty, horrible, vindictive little...you'll need a bleep for this...little cunt!

We agreed that Vicki would leave at the end of the series and I can't praise her professionalism highly enough. She was magnificent on Allo Allo and I'm so glad she was able to turn things around.

By the end of the series it was painfully apparent to me that Graham had to go but the sixth floor at the BBC had got into bed with Paramount and that Barry Diller wanted Graham...this is the first time I've spoken about on camera and it'll be the last. When we were preparing the Timewyrm series we were looking at the fifth Doctor
(Terrance Dicks, Series Producer 1976-1981, "Behind His Eyes" 2018)

What are the episodes for season 14?
Based on your last post , we know one is Sandstorm and one is Paperchase .

unclepatrick said:
What are the episodes for season 14?
Based on your last post , we know one is Sandstorm and one is Paperchase .
Click to expand...

Sandstorm
Egypt 1920. The Doctor and Sally find that explorers trying to get into Tutankamun's tomb are being killed by a silicon-based lifeform that is protecting the tomb (4 Eps)

Time Fractured
Recalled to Gallifrey The Doctor and Sally find that the Timewyrm (Diana Quick) an ancient enemy of the Timelords has returned and is threatening to destroy the Time Lords. The Doctor is able to defeat her but she escapes threatening to destroy both Gallifrey and Earth. Sally is returned to Earth and the Doctor is paired with Romana (Myra Frances) to track down and destroy the Timewyrm (4 eps)
Last edited: Apr 27, 2021 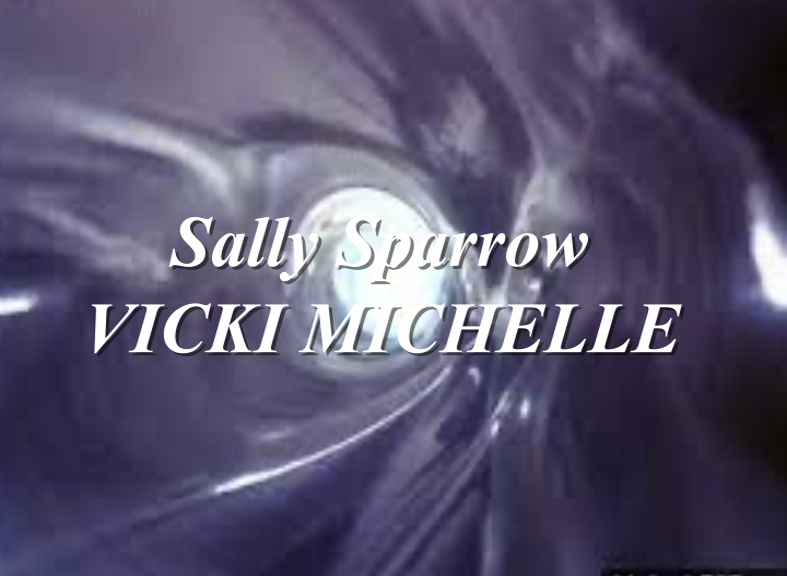 Would they have used the name Sally Sparrow ?
The name first became attach to the Show in 2006 when Stephen Moffit wrote a story for a Doctor Who Annual .
He then recycled the name for the script Blink in 2007.

unclepatrick said:
Would they have used the name Sally Sparrow ?
The name first became attach to the Show in 2006 when Stephen Moffit wrote a story for a Doctor Who Annual .
He then recycled the name for the script Blink in 2007.
Click to expand...

I don't know. In this TL Sally was a victorian flower girl and I thought it had a similar ring to Eliza Doolittle.

nezza said:
I don't know. In this TL Sally was a victorian flower girl and I thought it had a similar ring to Eliza Doolittle.
Click to expand...