Let use see, We have to return to the good doctor

"There'd been rumours for years that 'America' was interested in becoming involved in the show. UPN had come close in the 1970's but pulled out after Graham Chapman had attacked a colleague so we knew they wouldn't try again. ABC, CBS, NBC and Fox were all mooted but that was just talk. When I heard that Disney wanted in I thought 'uh-oh'

To many Disney and Dr Who may seem like a match in heaven and on the surface it may have seemed that way. Disney's announcement in late 1995 that they were launching their own network of channels in the USA turned heads.

Disney Prime would be back to back animation.
Disney Movies would show. a combination of classics plus it's huge archive of made for TV movies as well as new one.
Disney World would be a documentary channel which would combine new and old.
But it was Disney Plus that was the focus of many. It would according to Burbank branch out into more adult material including crime and comedy. And a BBC/Disney Dr Who would be the crown jewel.

But insiders on both sides of the Atlantic knew that Disney could be either a menacing partner or a terrifying enemy. Disney had been a partner in Sunrise Television who applied for the ITV Breakfast franchise only to lose to the ITN/ABC led Daybreak. One reason was that Disney were ruthless in cost cutting. One joke that went around at the time was that two Disney executives were walking around a backlot in the US when they passed a starlet.One executive said to the other.

To which his friend replied

The question is would the Doctor be Americanised or would the gritty Panoptican fit in with the innocence of the Mouse?

Under the Hammer: Inside Story of the ITV 1991 Franchise Battle : Davidson, Andrew: Amazon.co.uk: Books

Under the Hammer: Inside Story of the ITV 1991 Franchise Battle : Davidson, Andrew: Amazon.co.uk: Books
www.amazon.co.uk

"Why was BBC Scotland chosen to house the Doctor Who/ Disney production? St Andrews that's why. Many of the top brass from the US were golfing nuts and they thought they'd get a few rounds in. But they got a shock when they realised that BBC Scotland were based in Glasgow!"

I guess scenery is about to get better now they have more epic landscapes to choose in Scotland!

Robbie Coltrane as a companion…. Or a Doctor?

Ogrebear said:
I guess scenery is about to get better now they have more epic landscapes to choose in Scotland!

Robbie Coltrane as a companion…. Or a Doctor?
Click to expand...

Well Danny is still in harness. Robbie was shooting a Cracker special in 1996. Yes the Scottish scenery will be used but lets not forget that now the US is involved... 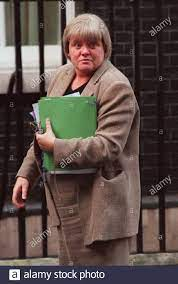 "Why Mo? Its a question I asked so many times after Mowlam's ascendancy to Number 10. The answer at least on the surface is simple. She was a sound alternative but it is under the surface where the real truth lies. Mowlam didn't want the job. She was content as Health and Social Services secretary and in her brief time there following the landslide of 1995 and had gained a reputation as a forceful yet compassionate minister.

But when Smith retired in 1996 many party insiders and many MP's knew that a straight fight between Brown and Blair would reveal all the tension that Smith had kept adroitly silent. Both Blair and Brown had their supporters and they hated each other. Tony's Twats Vs Brown's Bastards was what the internecine struggle was labelled as.

Many MP's knew that if either won the the other would full of bile and the hard fought victory of 1995 would be forgotten. The Tories under Michael Portillo were licking their lips.

It's known now that Robin Cook begged Mowlam to stand, he did briefly consider running but decided agains t because in his own words "I'm too bloody ugly for television".Mowlam provided a safe alternative, a third way "

kirbopher15 said:
Will we be getting a regeneration story at some point for the current doctor
Click to expand...

Yes but there is quite a story to go though.

nezza said:
Yes but there is quite a story to go though.
Click to expand...

1/2 Homeland
Landing in New York in the 1950’s The Doctor and Rachel discover a plot by the Daleks to use the Empire State Building to act as a weapon to destroy the country and turn it into a new world for them. (Filmed in the USA)


3/4 Catacombs
The Doctor and Rachel investigate a series of catacombs on a moon and discover a new form of Cybermen.


5 Downtime
On a relaxing break the Doctor and Rachel realise that the world of Tranquil Repose is nothing but.


7/8 Flashback/Old Wounds
Arriving back on Earth the Doctor discovers that Lethbridge Stewart is to be made a Colonel but the joy is short lived when LS is kidnapped along with the Doctor by the Master and are forced to find themselves dealing with long buried issues.

9. Muse
Rachel is found after the TARDIS is hit by an Ion Storm on an alien world and finds herself helping a troubled writer.
(With Ewan Macgregor as Timo and only the second story in the show’s history not to feature the Doctor. Only the sound of the TARDIS is heard at the end of the episode)


10. Come On Down
The Doctor and Rachel take part in a quiz show where the right answer is the wrong one and if you win then you lose
(With Nicholas Parsons as the host)


11/12. All Things Must End.
Arriving back on modern day Earth Rachel finds that her father is dying and that her younger brother Tommy has gone missing. As they search for Tommy, Rachel reveals more about her life including racial assaults and how Tommy was jealous of Rachel and hated his father. After finding Tommy and rescuing him from a gang of thieves they return to Rachel’s father and are able to reunite before he dies. Rachel realises that she has to stay and help Tommy. The Doctor leaves alone.
(With Tony Osoba as Mr Cassidy)
Last edited: Nov 14, 2021
Chapter 15 "The real world breaks through"

Before I start this chapter I must give a warning that some terms and language used in future posts may be offensive to some. I'm not deliberately setting out to be offensive but the subject matter is serious. In a nutshell this chapter will focus on issues regarding race, sexuality and censorship especially when it comes to Disney's international markets. This goes to @CalBear and the rest of the mods. If there are any issues with the language then I would appreciate a PM or post and I'll try and find a workaround.

nezza said:
Before I start this chapter I must give a warning that some terms and language used in future posts may be offensive to some. I'm not deliberately setting out to be offensive but the subject matter is serious. In a nutshell this chapter will focus on issues regarding race, sexuality and censorship especially when it comes to Disney's international markets. This goes to @CalBear and the rest of the mods. If there are any issues with the language then I would appreciate a PM or post and I'll try and find a workaround.
Click to expand...

The mere fact you felt the need to make this post pretty much means that you know you need to make some changes.

Let's make thing easier for everyone and do it before you make the post.

"Well it had to be watched even though its pretty horrible to view in some parts "The Dark Side Of Disney is an 85 minute long documentary on the Webb Years Blu-Ray and its a very courageous film .

The vast majority of the movie was taken up by interviews with Alphonsia Emmanuael and Christopher Biggins and how they felt their careers were affected by the pressure applied by the BBC which in return was being pressured by Disney who were having criticism from some states in the Deep South of the USA over the prominence of black and homosexual characters in both Dr Who and Panoptican.

Some of the language used in the documentary is pretty sickening and I'm not going to repeat it here but the anguish and rage shown by both of them burns through the screen. There is also a brief chat with Executive Producer Kevin Greenwood who spoke with pain about the number of poison pen letters that had been sent from states such as Alabama and Georgia and how an international incident was narrowly avoided.

You look at both Emmanuael and Biggins and even though they keep their cool you can tell they are struggling. Biggins in particular shows a rawness that is a startling change to his usual ebullience.

And we have from Emmanuel we have an admittance for the first time that Rachel's last story "All Things Must End" was a proverbial two fingers to the bigots.

A bold and brave documentary and one any sociologist should view"

"Danny had decided to leave after his third series. He never actually said to was because of the Disney business but I think it was heavily influenced. His public reason what that he was looking at moving on. He had been missing out on film roles. Channel 4 was developing a drama called "The King Of Chaos" and they wanted Danny to play the role of Liam Keller who was a more amoral character than DW.

I was obviously disappointed. I honestly thought Danny was the best Doctor since Tom Conti but the show had survived before and it will continue to do so"

"Good Evening and Welcome to Reporting Scotland. The former Prime Minister Baron Smith of Monklands has launched a blistering attack on the BBC after rumours started swirling that the corporation was going to cut jobs at their headquarters in Glasgow where this programme is produced following the premature ending of the deal between the BBC and Disney to co-produce Doctor Who following recent disclosures about racist and homophobic behaviour from Disney. In a rare statement during Scottish Questions in the House of Lords this afternoon Lord Smith stated his opposition to the plans"

------------------------------------
"My Lords. Like all right-minded people I have been angered by the revelations and rumours surrounding the deal between the BBC and Disney over Doctor Who. Racism and Homophobia are truly abhorrent and must be treated with full force and utter disdain. But the idea that jobs should be lost with careers and lives ruined at the BBC just because Disney have walked away in a strop is truly despicable.

The upgrade that the BBC in Scotland has had because of the deal has improved the lives of so many people and has given Glasgow a much needed boost. I am not a fan of Doctor Who but it has earned it's position as a much loved programme. It was around long before Disney were interested and it will be around for a long time to come. I call upon the BBC to scotch these rumours as soon as possible. I beg to move"

"Well the BBC have released a statement in the past few minutes saying:

'there are no plans to cut jobs and resources at BBC Scotland. We are dedicated to continued production of Doctor Who and can announced that planning for the next series which will be the last to feature Danny Webb as the Doctor is in full swing. We have not yet started the casting process for the ninth Doctor"