Megafighter3 said:
That's why Megaman X is Nintendo-exclusive while Legends is Sony exclusive.
Click to expand...

I thought Because Capcom is weird at times, still dunno, as say before, OTL Sony did pay for FFVII that is why never was ported to Saturn or DC, dunno if Nintendo would do the same(Knowing Yamauchi...nope, and Q fund was not founded...YET), still dunno is jus the butteflies can flap anywhere..i can't even say a path as would be using the net so much, is just using OTL as basis...there not basis unless someone moneyhat first..maybe even SEGA could suprise us

Megafighter3 said:
Because never forget that multi-million dollar corporations are usually headed by some of the pettiest people in the world. It's not a matter of money for Nintendo, but purely because they're still salty about the original SNES-CD deal falling through and Sony launching the Playstation. Sharing one of their long-running franchises with Sony is not a prospect Nintendo is willing to entertain unless they get something for themselves That's why Megaman X is Nintendo-exclusive while Legends is Sony exclusive.
Click to expand...

So basically it’s like “You got an exclusive IP for our rival, give us one or you’re not making anything for us again”.

Ryan Kelman said:
So basically it’s like “You got an exclusive IP for our rival, give us one or you’re not making anything for us again”.
Click to expand...

Regardless what we do..where dissing SEGA hard....well again, did Square even know SEGA existed?

Nivek said:
Regardless what we do..where dissing SEGA hard....well again, did Square even know SEGA existed?
Click to expand...

Nivek said:
Regardless what we do..where dissing SEGA hard....well again, did Square even know SEGA existed?
Click to expand... 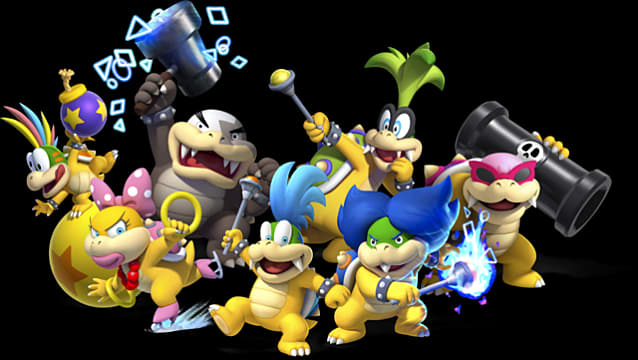 Directed By: Rob Reiner
Produced By: Jake Eberts/Roland Joffé
Written By: Blake Snyder
Based On: Super Mario Bros. by Nintendo

Release Date: June 5, 1998
Budget: $250 million
Box Office: $50 million​
The streak finally comes to an end for Nintendo as Mario 4 hits theaters and is met with a critical asskicking. Rob Reiner, coming off a string of failures with North, was called in to replace Harold Ramis with a screenplay written by Blake Snyder. The plot as it were sees a lot of changes from the previous film, with Mario now having been left by Pauline and with Luigi spending more time with Daisy, it's just him, Toad and Junior in Manhattan. Along with that, the Mario Bros. Plumbing Service is struggling to make ends meet. However, Mario's fortunes turn around with a woman by the name of Peach hires him and Toad to fix up her plumbing. This client is not only rich, but also stunning to look at, but there's something about that Peach that seems familiar to Toad. He can't quite put his finger on it...

Soon, Mario's back in the game of plumbing, occasionally flirting with Peach on the job while he and Toad get into all sorts of antics. The antics aren't helped as the plumbing is also sabotaged by the Koopa Kids, King Koopa's seven young children, who have managed to claim the necessary magic to enter the human world. The Koopa Kids look to kidnap Peach and make her their "mama" before they're discovered by Mario. More slapstick comedy ensues as Mario and Toad get into fights with the notorious all CG Koopa Kids, Peach getting caught up in the scuffle and being revealed as Princess Peach of the Mushroom Kingdom in the process.

The whole movie is a series of broad slapstick set pieces. While the first movie evoked the fantasy-comedy stylings of The Princess Bride, the second took cues from Space Operas like Star Wars and the third was a swashbuckling pirate adventure, this movie seems more like a horrible cross between Home Alone and the Garbage Pail Kids movie. The movie ends with all the Koopa Kids flushed back down the toilet they came after having destroyed Peach's house. Peach moves in with Mario as the two live happily ever after, though the movie does foreshadow the arrival of Kamek, the Magikoopa who had granted the Koopa Kids the power to traverse worlds.

That sequel hook went unbitten as the combination of thin plot, obnoxious kid appeal and competition from Sonic's second movie lead to the first box office bomb from Nintendo (and the first video game bomb. The one bright spark was the surprisingly good chemistry between Hoskins and Madonna. Many fans felt the loss of Leguizamo as Luigi damaged this movie and many questioned why it was even called "Super Mario Bros. 4" if there was just the one Mario and Toad. Many had also criticized the switch of Junior to full CG, feeling that while he was now more mobile than ever before, that the animated Yoshi looked unsettling. Overall, the film was an utter disaster.

oUCH, DOUBLE OUCH, Hoskins deserved a better ending than this, wonder if he pull a clooney and if someone say he watched SMB4, he offer the ticket refund

Nivek said:
oUCH, DOUBLE OUCH, Hoskins deserved a better ending than this, wonder if he pull a clooney and if someone say he watched SMB4, he offer the ticket refund
Click to expand...

Well, at least Hoskins will have about as hard a time as Kaufman did refunding people who saw Heartbeeps.

Megafighter3 said:
Well, at least Hoskins will have about as hard a time as Kaufman did refunding people who saw Heartbeeps.
Click to expand...

On to something else I guess.

Megafighter3 said:
Well, at least Hoskins will have about as hard a time as Kaufman did refunding people who saw Heartbeeps.
Click to expand...

Nivek said:
He could pull a schumacher and accept the obvious Raspberry award the movie will get and apologize for that
Click to expand...

So SMB4 is basically Batman And Robin.

Ryan Kelman said:
So SMB4 is basically Batman And Robin.
Click to expand...

Yeah for Nintendo and Mario movies series, if the movies will be rebooted, would be much later and of course much more focused

Nivek said:
Yeah for Nintendo and Mario movies series, if the movies will be rebooted, would be much later and of course much more focused
Click to expand...

Frank, Tabi, Tara, you all deserved better than this!!!!

Well, here's me screwing up chronology something fierce. I forgot to set things up for Rampage which releases a month earlier. Right now, I've got a director and a pair of writers for the movie; Jan de Bont will be our director and the duo of Ted Elliot and Terry Rossio will be writing. Now, as for the main cast, I'm imagining this movie to be very... radical in nature. Teen actors or adults who can play convincing teens will be needed.

Rough plot: Lemme see if I can give you this in the most 90s way possible *Ahem* A new flavor of Scum Soda just launched! Far out! But, it comes with a bit of a side effect... see, the good folks at ScumLabs were testing with a new experimental additive and while it's mostly harmless, it was found that certain people that drank the stuff would start to mutate and grow into giant animal monsters! So, that's a bit of a bummer. It turns out that one of those people is Lizzie, who becomes a humongous lizard monster and starts tearing up cities. Liz's best bud Goerge and his dog Ralph follow after her, while also being tailed by the suits at ScumLabs who wanna kill Lizzie and cover up the whole thing! They're under the command of ScumLabs CEO Eustace DeMonic, but it turns out the scientist behind the additive, Dr. Betty Veronica, is on George's side. She helps him out by giving him a concentrated dose of the additive, turning him into a giant gorilla monster, but with an inhibitor collar attached to keep him from smashing things as well. Can George stop Lizzie before ScumLabs? Can Dr. Veronica keep George under control? Who can stop the Rampage?

So yeah, we're gonna need casting for George, Lizzie, Eustace DeMonic and Dr. Betty Veronica. We can mostly ust run with whoever for George and Lizzie since the human forms aren't the major importance. As for Eustace and Dr. Veronica, I got reference pics. 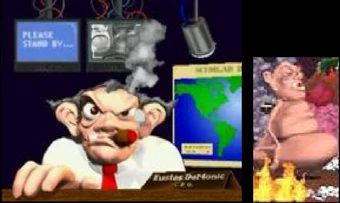 Don't worry about the thing on the right. That's his monster form which won't be used.

I'm also seeing a lot of Christopher Lloyd in that DeMonic pic. For the good doctor, Halle Berry?

I actually think Danny Devito could be fun as Eustace but he's already Wario so maybe Christopher Lloyd.

tornadobusdriver said:
I actually think Danny Devito could be fun as Eustace but he's already Wario so maybe Christopher Lloyd.
Click to expand...

Yeah Mr lloyd work so well and that plot remind me Sunset Overdrive(of course the game not exist yet) but seems very nice,some grunge and numetal music and we've got a nice movie.

Dunno, Halle Berry didn't give good vibes since catwoman...other ideas?
Threadmarks
You must log in or register to reply here.
Top
Top