Look to the West Volume VIII: The Bear and the Basilisk

NB. Volumes I & II and Volumes V & VI were split retroactively so each share one thread.

Volumes I-IV (currently) available for purchase as eBooks(with accompanying media and bonus features) from Sea Lion Press via Amazon and other online purchases. Click 'Look to the West' on the left sidebar, then click the individual volume covers to see links to Amazon etc. Alternatively, see my Amazon author page for a list of all my books.

Volumes I and II also available as print paperbacks from the same source, and III and IV will be forthcoming once delays caused by the current pandemic are resolved. V is coming soon(ish) as an ebook.


Look to the West

VOLUME EIGHT:
THE BEAR AND THE BASILISK​

“If KNOWLEDGE draws lines on a map to divide us from them;

If WISDOM proclaims that glory is worth more than human life;

If PROGRESS means new ways to kill more of our fellow men more swiftly than before;

If UNDERSTANDING concerns the weaponisation of all of science;

If INSIGHT is merely for foiling the plans of self-proclaimed enemies;

And if MEMORY ensures that ever death shall be avenged sevenfold;

Then, say I: LET OBLIVION REIGN!”

Banned
I always wondered what the Last Speech of the Combine would be? And they still have Kapudes?

also what is the Middleflag?
Interlude24

DIRECTOR STEPHEN ROGERS (SR): Hello? Can you hear m...where’s the thingy for...am I muted? Are you muted? Did you fix that browser compatibility issue, Seamus?

SR: There – yes – yes I can hear you now. Hmph, appears the problem was on our end after all. At least one advantage of...all this is that we’re developing the infrastructure for more meaningful commuuuuuuuuuubzzzzzzzz

SR: Yes? OK, yes, I can see them again now. I’ve closed those background tabs, how was I to know the runtime was...Captain MacCauley, do you want to—

SR: Yes, that’s it. More meaningful communication. None of that ancient text digitiser and datastreams stuff, not now we can make the Portals small enough to avoid any intercepts. We can have a Zoom call—

LIEUTENANT THOMAS BLACK (TB; under his breath): Other APPS are available.

SR: —between two timelines just as easily as betweeeeeeeebzzzzzz –people in adjacent buildings. In a grim time like this, at least we can stay better in touch than last year.

DR BRUNO LOMBARDI (BL): Uh, yes, sir. Speaking of which, any word on when we’ll be able to return? We’ve been stuck here four months now because of the quarantine, you see, as I said in my last message—

SR: Yes, yes. It’s obviously very important that we don’t spread the virus to other timelines. (Strained tone) I already have to answer about three memos a day from briefed Government ministers asking if it came to our timeline from one of the ones we’ve visited.

SR (firmly): No. And nor does a cure for it exist in any of the timelines we’ve explored, I have to answer that one daily too. Anyway, to answer your question, it would be one thing if you were on the analogous territory to the UK still, but the fact that you’d have to come back through to South Carolina and then be flown here...you’d be passing through too many sets of hands, I don’t want to risk it. If you’ve got any more messages for your families, of course—

CAPTAIN CHRISTOPHER NUTTALL (CGN): Well, at least we’ve had plenty of time to gather more information, sir. Now we’re no longer in the middle of all that stuff with the Olympics—

SR: Very well, Captain. Now we’ve re-established this link, you should continue to send your information on TimeLine L. All the plans we discussed four months ago have necessarily been delayed by this global crisis, of course; the Security Council has more things on its plate right now. But we’ll continue compiling your work for when that day comes.

CC (incredulous): He IS?

(SOUND OF DOOR SLAMMING BACK)

DR DAVID WOSTYN (DW; breaking into the call): Mille sabords en le tonnere de Brest! Chicken ‘bog’ they call it! Too right! Tastes like a swamp! If that’s their idea of ‘cultural culinary reconstruction’, I think Sanchez had the right idea—

CGN (glassily): Ah, Dr Wostyn, I see you’ve made it back from your shopping trip for (coughs) our important Zoom call with the Director, who I’m sure you’ll want to—

CGN (peers at it): So it is. Technological progress, eh?

BM: I’ll just send him an email or something with what we’ve found.

BL: Yes, make sure you mention all those sources we’ve got this time—books in that library, fact and fiction, all those pamphlets, even the local Motext when I figure out how the blasted thing works.

DW (sighs): D’accord. But can we please avoid quoting from those damn racist news broadc—

Donor
Yes, we're back once again with another exciting episode of Look to the West. This is just the prologue, the first proper update will be this Sunday.

It looks as though Volume VIII is going to have longer parts (like Volume VI) so each weekly update on Sundays will be a segment of a chapter/part rather than a full one. I have a busy schedule coming up but I hope I will be able to keep to the weekly updates once again!

Thanks to everyone who has liked and commented in the past; I am in the later stages of preparing Volume V for publication right now; and here's a reminder of the world situation as it stands in 1922 on the eve of the Black Twenties. 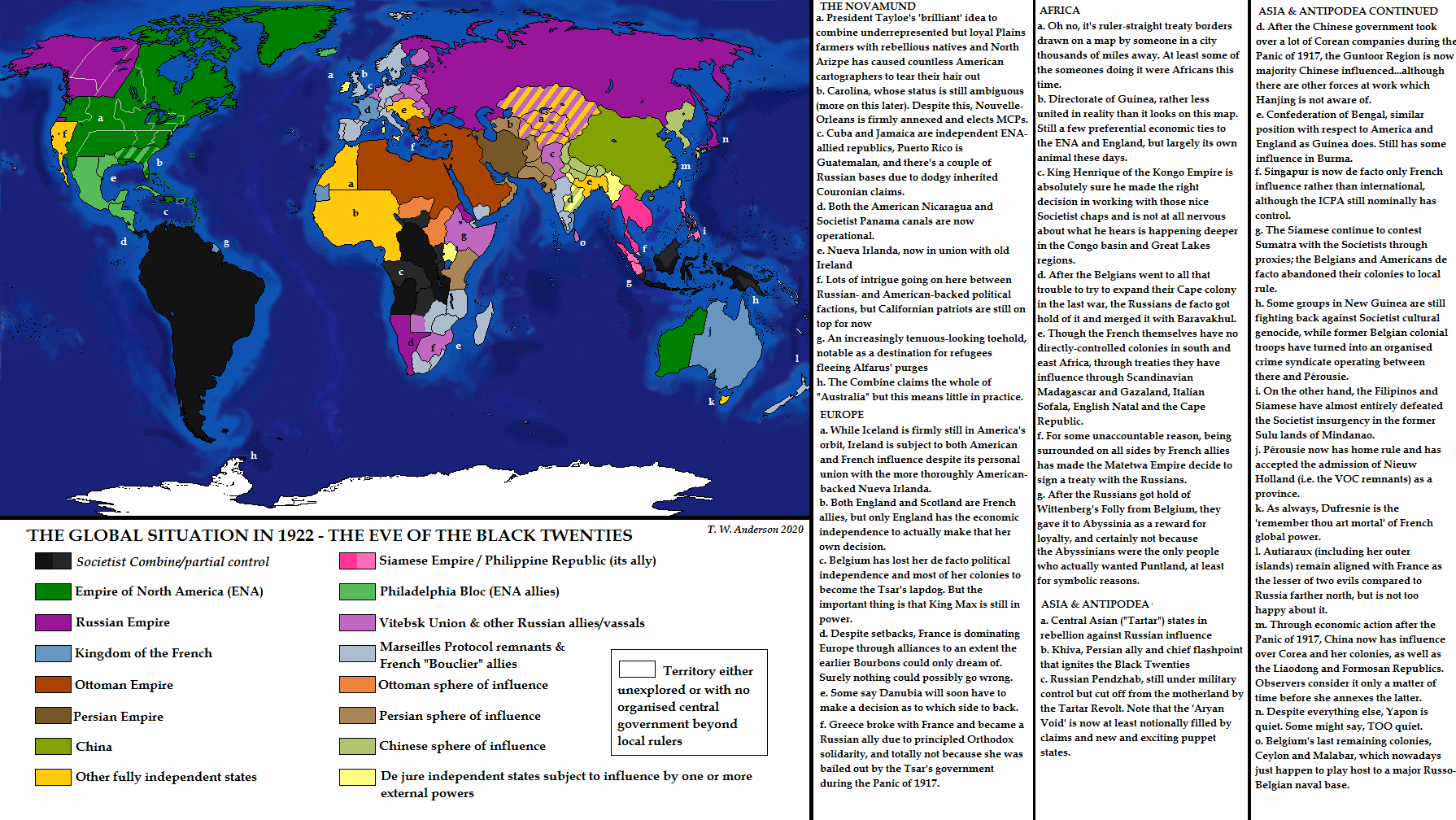 So glad to see this is back! Very excited to learn where the story goes from here.

I have to say, I respect your decision to have the pandemic going on in the framing device. It could have been easy and forgiveable to just handwave it and say "It's OTL except without current events" but I think the current events really grounds it in the reader's mind.

Banned
Wostyn is French? And here I was, thinking all this time that he was a South African or something. (Because "Wostyn" resembles the Dutch word "Woestijn" -- meaning desert -- which can be a last name.)

Okay, maybe that's not the big take-away from all this. On a more serious note: we are now getting a big hint that the radio-active nature of parts of the former Combine may actually be self-inflicted. Rodrikus very much sounds like he's leading an apocalyptic death cult.

And on the flip-side: the reference to racist news broadcasts in Carolina hints that the "cultural reconstruction" also involves reconstructing some pretty unpleasant cultural elements...

Seems like we're in for some interesting times! Looking forward to Sunday!

Glad to see this back! I'm really excited to see where this goes.

I just hope we get to see more new flags, there was a distinct lack showing of new flags in the last few parts.

245 said:
I just hope we get to see more new flags, there was a distinct lack showing of new flags in the last few parts.
Click to expand...

Glad this is back. I'm interested in how the Combine winds up with Carolina again, as I think has been implied before.

Skallagrim said:
Wostyn is French? And here I was, thinking all this time that he was a South African or something. (Because "Wostyn" resembles the Dutch word "Woestijn" -- meaning desert -- which can be a last name.)
Click to expand...

Real name of Hendryk, a banned member of this site. Primarily known for Superpower Empire China TL
e.g. https://www.alternatehistory.com/forum/threads/superpower-empire-china-1912-version-3-0.86560/
He is, in real life, French. Although presumably of Flemish ancestry in the male line.

--------
Tom Black, Chris Nuttall, Bruno Lombardi, and Bob Mumby are/were all prominent posters on this site, and there's also in joke references to others in the story.
Last edited: Sep 2, 2020

Can't wait to see this in action- I only just caught up with the work.

245 said:
I just hope we get to see more new flags, there was a distinct lack showing of new flags in the last few parts.
Click to expand...

Your enthusiasm for this TL was flagging without them?

Great to see this timeline back, really looking forward to this volume.

xsampa said:
I always wondered what the Last Speech of the Combine would be? And they still have Kapudes?

Given the fleur de lis, I guess France

xsampa said:
also what is the Middleflag?
Click to expand...

Red, white, and blue with a fleur-de-lys - pretty sure that's France.

Poor New Guinea. And poor central Africa! And of course, Societism hasn't even reached its furthest extent yet.