EdmundS said:
How and why does everything stay the same?
Click to expand...

this is one of those 12 am thoughts i dont put a whole lot of thought into, but i wanna share anyway

The basic premise here is the end of the Cold War marked a period similar to what Fukuyama envisioned as 'the end of history.' The People's Republic of China made political reforms in the 1990's thanks to the diplomatic efforts of George HW Bush and the US heps Russia's transition to capitalism in a more orderly manner. With both Russia and China democratizing, the major threat to world peace is terrorist organizations and rogue states who cannot pose an existential threat to the world. The US's two major political parties prove overall moderate and combatting climate change is much more bipartisan.

However, the drawbacks of this apparent utopia quickly materialize. The US regularly engages in overseas military interventions and the post-Vietnam doubt gives way to full-throttle thirst for crusades for democracy. The US ends up falling victim to two major terrorist attacks-an alt-9/11 targetting the Empire State Building and a Hezbollah-perpetrated series of bombings in San Francisco that is used to justify a war with Iran. By 2025, the US has fought wars in the Balkans, Kazakhstan, Sudan, Iraq, Syria, Lebanon, Iran, Uganda, Somalia, Afghanistan, the Congo, Venezuela, Cuba and North Korea and is still occupying Afghanistan, Venezuela, Kazakhstan, Uganda and Iraq. The war weariness is relatively limited as the wars are increasingly automated and fought via contractors.

An additional drawback is also present: a deeply entrenched neoliberal consensus. The government and major corporations are quite cozy ITTL and the likes of Amazon, Google and Yahoo are very much intertwined with the government. Privacy rights are eroded by both governments and corporations. Beyond that, the banks remain deregulated despite the recession happening more or less on schedule and the interests of the wealthy are prioritized over the rest of the country on most issues besides climate change-the minimum wage remains unraised, taxes have not topped 30% since 2010 and many businesses are considered too big to fail and thus get bailouts.

Hydrons said:
Do another one of these, but with the Hamilton's and New York
Click to expand...

Just saw this! Unfortunately the list is from a larger scenario where NY does not have a hereditary executive.

EDIT: Prime Ministers of the United Kingdom of Great Britain and Northern Ireland

Presidents of the United States of America: A President Elect Timeline [Part I]

POD in this TL would be Bobby Kennedy's decision to run for the 1968 Dem nomination since the start and forcing LBJ to a 1-point victory New Hampshire. LBJ withdraws as in OTL, and with only token opposition Kennedy cruises through the primaries. By the Convention, Humphrey's delegate lead is narrow - so once Mayor Daley (after much effort in convincing him) starts talking Midwestern party bosses from non-primary states over to Kennedy's camp, the tides change. Bobby Kennedy wins the first ballot with a peace plank and chooses Ralph Yarborough, progressive Texan senator, as his VP nominee.

[1]: The 1968 election was complicated. While Dem front-runner Humphrey conceded the race graciously once it was clear Kennedy held a majority, LBJ and numerous leaders from the South were unwilling to help Kennedy: the President in particular decided to follow the complicated path of securing his legacy in Vietnam while avoiding helping Kennedy. Meanwhile, GOP candidate Nixon went with a more moderate campaign (albeit the undertone of his "Law and order" slogan) attacking Democratic radicalism; Independent George Wallace moved consequently, pandering to Nixon's base with a Goldwater-y platform. Kennedy's campaign, thinking they were stuck with the "Negro problem" and seeing Nixon's hold of the center decided to double down on liberalism as a way to increase minorities and working-class turnout. As such Kennedy ran as an anti-war economic populist, putting forward «A New Hope for America», an agenda focused on Civil Rights, strengthening unions, slashing poverty and peace in Vietnam.

Nixon held a comfortable advantage over Kennedy throughout Summer and the first half of Autumn, with a +10 to +15 trend. However, the trend steadily decreased as Election Day got closer, and with the now infamous LeMay gaffe ("The enemy's infiltrated labor" rant) gifting RFK momentum with would-be Wallacites in the Midwest, mid-October provided Democrats their first succession of 2-point deficits. A worried Nixon decided to gamble the election making the Paris Peace Talks collapse, using Anna Chennault as a channel to South Vietnamese leadership. And it would have worked perfectly if only the White House hadn't heard them. Johnson was conflicted. Having Nixon's aides sabotaging his peace talks made his blood boil. The thought of being sandwiched between the Kennedys also made his blood boil.
Luckily for Democrats, V.P. Hubert Humphrey was not conflicted. Once he was informed of the sabotage, Humphrey decided he couldn't live knowing Nixon would be elected by treachery, and leaked the info to CBS. The Nixon headquarters had celebrated "South Vietnam abandons negotiation table" headlines for some hours when Walter Cronkite informed the nation of alleged Nixon involvement in said decision, and the press followed suit. Nixon obviously denied the accusation, but the damage was done. In an already neck-to-neck race, voters once cold to the «New Hope» saw it a much preferable option than electing a traitor. Kennedy enjoyed a surge in the 11th hour. 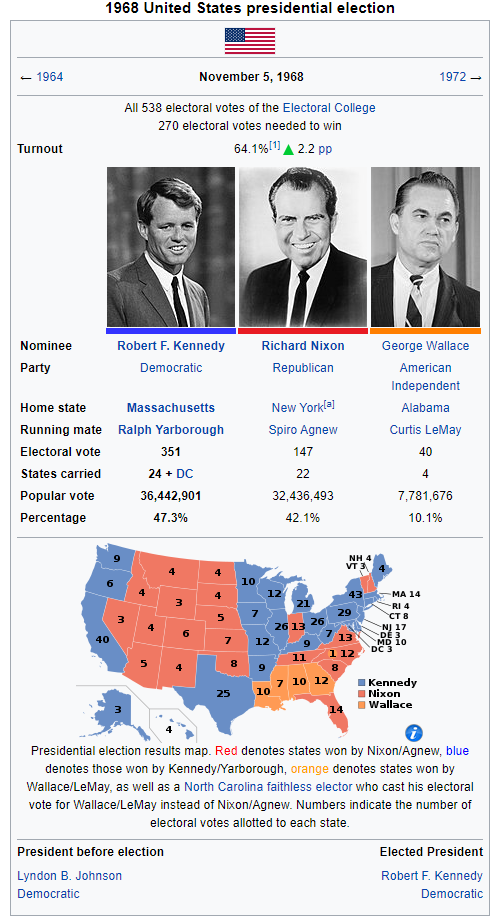 This list was made with the election simulation game President Elect: 1988 Edition. Since the game only covers the campaign I'd do after-action-reports to give sense to the results. I'll be updating tomorrow
Edit: Changed some of the 80s/90s candidates because I had messed up data in the original document I copypasted this post from, now it has been corrected. Couldn't really update because of social life lol, only had time to do the 1968 election summary and infobox. Anyway, what do you guys think?
Last edited: Jan 10, 2020

THEY SAID IT COULDN'T BE DONE

Comrade Izaac said:
THEY SAID IT COULDN'T BE DONE
Click to expand...

Comrade Izaac said:
THEY SAID IT COULDN'T BE DONE
Click to expand...

You are strongly cautioned to cease and desist.
Last edited by a moderator: Jan 10, 2020

List of the leaders of the atl British Empire Soviet Union in a pseudo-Timeline I have (does not have any thread, its not a real timeline yet).

[1] Britain is on the losing side of (an alternate) WW1. Albert Inkpin was the otl leader of the Communist Party of Great Britain in the same time period. He serves as the Lenin analogue.
[2] Another otl leader of CPGB. Stalin analogue. Reorganized the Revolutionary Union into the Britannic Union (At the time consisting of the British Isles, Gambia, Sierra Leone, Liberia and Ghana + Ascension, St Helena and Tristan da Cunha). He also lead UBSC during WW2 (for UBSC it was more like 4 wars. The war against British Empire 1939-1940, the War against Argentina 1941, the war against USA and Mexico 1942-1944, the Second World War proper against Latins (and Yugoslavia) 1944-1945. WW2 proper was 1939-1945 for the actual Allied Powers however)
[3] Another otl leader of CPGB. Khrushchev analogue.
[4] Otl first president of Zambia. Zambia was a part of UBSC from 1947 to 1991 (one of the last to leave), saw West Australian BSC join Loyallist Australia.
[5] Another otl CPGB leader. Presided over some smaller BSCs leaving. Stepped down after reunification of France.
[6] New England was annexed after WW2. Sanders serves as an analogue for Gorbachev. Most of the BSCs left during his time as leader. In 1991 he stepped down as New England declared its independence. Maritimes also left UBSC and joined New England. Zambia and Uganda also left in the same year.
[7] Last leader of UBSC, now reduced to British Isles, South Atlantic Isles and Gibraltar. Ireland would declare independence and he would lead the British Provisional Government until elections could be organised in the Restored United Kingdom of Great Britain. Now leads the Socialist Party of Great Britain, one of three major parties in Britain (the leftiest one). Others are Labour (centre-left) led by Tony Blair and Conservatives (right) led by Boris Johnson.

Comrade Izaac said:
THEY SAID IT COULDN'T BE DONE

And when they said that about Current Politics outside of Chat they was right.

CalBear said:
And when they said that about Current Politics outside of Chat they was right.
Click to expand...

I think it's not that you can't use current politicians (based on the other lists here), but you can't have a POD in the OTL current or recent past elections, basically?

Anyway, there's a thread for Current Politics Lists in Chat.

This REALLY is not the fight you want to pick.

CalBear said:
This REALLY is not the fight you want to pick.

CalBear said:
This REALLY is not the fight you want to pick.

Just a quick little list on if Gerald Ford didn't pardon Nixon. Butterflies are that he narrowly clinches the Rep. nomination and a jealous Reagan forms a third party. I'm only going until the 2000 election.

1. Successfully impeached from office
2. Assassinated
3. Even if he won, Bill Clinton would've had to resign due to his numerous sexual assault allegations.
4. Died in Office

Oh. Hell. Yeh.
Threadmarks
You must log in or register to reply here.
Top
Top