Seeing how late the French established foothold on its coast and how it was just next door to what is now Liberia OTL, it could've fallen to anyone nearby. British being the most likely, but what if Assinie(sp?) was instead overtaken by American Colonization Society (ACS) rather then by French ? Perhaps it needs a divergence before the said ACS was born, but for the sake of argument, let's say it happens. What will we get of it ? Do we see a Liberia with double size, or instead, we'll actually see two freed-slaves states formed next to each other ? Also, with weaker *Liberia instead of France colonizing the country, will we see the interior polities like Baoule and Kong/Wassoulou Kingdoms survive as at least semi-independent protectorates of the other powers ?

Liberia originally larger and did include a chunk of Cote d'Ivoire (as seen in the attached map), however the French (and British in the North) gradually whittled it down to what it is now.

That said the thing to remember to is that until around the end of the 19th century Liberia only actually controlled its coastal area, indeed originally Liberia was basically just the coast, it was gradual expansion and exploration of the interior over time that lead to its growth. 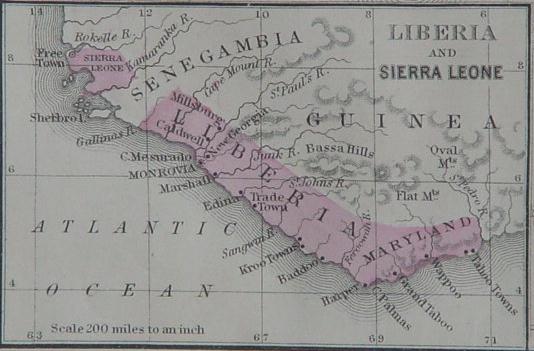 I know that Liberia used to extend well into Cote d'Ivoire's, and I know that it took them rather long to actually expand into the interior. What I'm basically aiming for here is to place a state for American freed-slaves on an alternative location and then extrapolate whatever that can happen from there. Whether single alternative Liberia on Ivorian coast, or actual scenario with twin Liberias living side by side, which is even more intriguing if actually doable. Also, perhaps this way could've salvaged some of the native polities around the locality, such as Kong/Wassoulou and Baoule. Mossi will likely benefit from this, too.

One way it might work is for France to start an organized freedmen's colony there. France did settle one shipload of freed slaves in Gabon in OTL, but it never got serious about colonization the way the United States did in Liberia or Britain in Sierra Leone (or even Spain in Fernando Po, where several hundred freed slaves from Cuba were settled during the 19th century). If the French navy were to become more active in slave-trade suppression during the early 19th century, it might start a Sierra Leone-like colony in Côte d'Ivoire and later encourage freed slaves from the Caribbean to move there, resulting in three freedmen's states right next to each other.

I'm not sure how good this would be for the nearby native polities, given that neither Liberia nor Sierra Leone had very good relations with them. It might help the African states further inland, though, because it would block one potential route of European expansion and could also be a base for mercantile exchange.

(BTW, there were several "Liberias" in OTL - different colonization societies set up their own colonies such as New Georgia and Maryland-in-Africa, which eventually merged into Liberia because none of them were big enough to stand on their own. The same would most likely happen to any American freedmen's colony in Côte d'Ivoire. There weren't enough American freedmen willing to settle in Africa to hold a territory that big, which is why I'm suggesting the French colonies as alternate sources of settlement.)

Frankly, I want it to be an American enterprise since it will have less reason(no need to reach Mali) AND capability to expand into the interior, and since the most likely alternative to French Rule is boring(British). Besides that, I'm also looking to save what native polities in the country I can save. How about the Baoule ? They seem to me as much more resistant and organized then the Krus, so perhaps conflicts with the Liberians will bring back full-flegde unity among them ?
Last edited: May 29, 2013

Ridwan Asher said:
Frankly, I want it to be an American enterprise since it will have less reason(no need to reach Mali) AND capability to expand into the interior, and since the most likely alternative to French Rule is boring(British).
Click to expand...

In that case, the United States might get more serious about "encouraging" (read coercing) freedmen to settle in West Africa. If there are 50,000 or 100,000 settlers rather than 14,000, then multiple coastal states are a distinct possibility, and there would also be larger satellite communities in Lagos and Fernando Po.


Ridwan Asher said:
Besides that, I'm also looking to save what native polities in the country I can save. How about the Baoule ? They seem to me as much more resistant and organized then the Krus, so perhaps conflicts with the Liberians will bring back full-flegde unity among them ?
Click to expand...

The Baoule are a possibility - I was thinking more of the next tier of kingdoms north, but if the balkanized Liberians expand slowly enough (and give the Baoule a chance to play the freedmen's states off against each other), they might survive. They'd probably turn into a hybrid culture over time.

Banned
I could easily see a POD right after the Civil War, either because Lincoln lived or from a Seward Administration. Lincoln believed (correctly, as it unfortunately turned out) that the only way African-Americans could retain their freedom was if they were resettled out of the United States. And Lincoln actually attempted to negotiate a massive transfer of African American freedmen to British Guiana and British Honduras (now Belize) in 1964, but the British were not interested.
Suppose the US goes to war with France in 1865 over France's establishment of Emperor Maximillian as Emperor of Mexico instead of simply massing 50,000 troops on the Mexican Border OTL. Since by this time, the US had a rather large navy, I could easily see a war with France resulting in the US taking not only Mexico (and keeping Mexico) but taking and keeping French Guiana, Guadaloupe, Martinique, French St. Martin, Tahiti, New Caledonia, forcing France out of the two Vietnams and Cambodia, creating an open door policy there---and taking the French African colonies and then settling large numbers of freedmen there. The purpose would not only be to create a home for freedmen, but as an excuse for a US protectorate in Africa with African-American freedmen as US proxies. Would this lead to independence for Liberia reasonably soon? Or would Liberia (extending to the Senegal River and to the Gold Coast with the exception of Gambia and Sierra Leone, both held by the British. And Libereville on the Gabon Coast. It would give the US some skin in the scramble for Africa Game How soon in this scenario would a Greater Liberia achieve independence?

I don't think it's likely that a severely war-torn United States (over 600,000 Americans died in the Civil War) would emerge triumphant in a war with France in the 1860s. At the very least, the war would be an extremely difficult sell for the American government.
Last edited: Jun 10, 2013
You must log in or register to reply here.
Top
Share:
Share
Top