Lands of Ice and Mice: An Alternate History of the Thule

Currently, I'm working on a Kaiju novel for my Christmas break. It turns out that the South Korean monster, Yongary (1967) is in Public Domain. And coincidentally, so is the North Korean monster, Pulgasari (1984). So, I am writing epic kaiju battles, set adjacent to a crazy state, on the last place on Earth that the Cold War is still a thing, with lots of fascinating historical baggage.

Sorry everyone. I know posting here gets your hopes up. I'm sorry to say, it's not an update. For what it's worth, I really do plan on coming back to this thread, and to Green Antarctica. I have ideas for both, and it would be very satisfying to re-engage. But having said that, it's a little too busy right now.

It's just shameless self promotion. But this place was my home as a writer through some dark years after my life fell apart, and I think I did some good work here in this and other timelines, and I have considerable fondness for the place and people. So really, it's not so much self promotion as the desire to share a small semi-achievement with folk that I see as kindred spirits.

The World Fantasy Convention is the great ‘Business Convention’ of the SF/F/H Literary World. It’s not a Comic-Con, it’s not a fan con. There’s dealers, but they’re just one room. Mostly, it’s Writers, Agents, Editors, Publishers and Artists, people in the trade, and people trying to get in the trade, hanging out, hobnobbing, socializing, enjoying each other’s company, and sometimes wheeling and dealing.

Go there, and odds are you’ll meet all your favourite writers. You can walk down a hallway, and see the writers you grew up with, the writers that helped form your identity, the people you passed time with, the writers who were guilty pleasures, and the ones you’re reading now. You can just go up and talk to them. It’s a business Con, the panels are about writing, serious writing, genres, where the industry is going, insider views.

It’s the place to be if you’re dedicated to the craft. This year, it’s in Salt Lake City, and due to Covid-19, it’s online.

Alternate History, Thursday, October 29th 6:00 pm – 6:50 pm
Alternate history has long been the domain of science-fiction writers, but it is now being enthusiastically colonized by writers of fantasy, who are bringing in magic, dragons, and the full panoply of the uncanny into what used to be an orderly and rational sub-genre. Who’s doing this and what’s going on?
Moderator: Gillian Pollack. Panel: Charlaine Harris, Den Valdron, Madeline Robbins

Wow, alternate history! This is right up my ally. For those of you who follow my non-career, I’m pseudo-known for Green Antarctica, a disturbing history of terrifying civilizations that evolve in a non-glaciated south pole. It got a TV tropes page. I was also given a TV Tropes page for Land of Ice and Mice, about agriculture north of the arctic circle, and the resulting Inuit civlization. Bear Cavalry, available as an ebook, about the Viking domesticating bears, and their use as mounts in medieval wars. Axis of Andes, on this site, about WWII overtaking South America. Two of my short story collections, Dawn of Cthulhu and Fall of Atlantis heavily explore alternate histories.

As to the other panelists… Charlaine Harris… yes THAT Charlaine Harris, the Sookie Stackhouse mysteries, True Blood TV series, she’s definitely the big name on the panel. Gillian Pollack, our moderator, is a PhD in history, and an award winning Australian fantasy writer. Madeleine Robins, generally known as Mad, has worked in publishing (magazine, trade pub, comic books, and kid’s activity books) doing a diverse set of things, has written a series of Regency Noir, featuring a heroine who is a Fallen Woman of good family who supports herself by… being a private eye. As you can see, everyone’s pretty awesome, but I have hopes of keeping up.

has this TL been dead for 6 years and I just never figured that out?

It's just taking a rest, I promise.

DValdron said:
It's just taking a rest, I promise.
Click to expand...

Somebody-Someone said:
are you the guy from monty python trying to sell a dead parrot
Click to expand...

Nope. I'm a fairly prolific writer with a lot of irons in the fire.

Listen, while you're waiting, you could read some of my other stuff. I got novels, ebooks, tons of stuff.

That's pretty cool - you're sharing a table with some big names at a major event.

What's the other panel you're doing?

Talwar said:
That's pretty cool - you're sharing a table with some big names at a major event.

What's the other panel you're doing?
Click to expand...

And finally 'Laws of Fairyland' "Every society, real and imaginary, has at its basis a legal system, a method of evaluating right versus wrong. What influences have modern legal systems had on fantasy fiction? What fictional worlds demonstrate a finely-tuned legal system, and what impact do those laws have on the development of the stories? "
Moderator: Den Valdron (!), Panelists: David Drake, J.R.H. Lawless, Mary Thompson.

It turns out we're all lawyers. It might be esoteric, I dunno. We'll see how it goes.

Laws of fairyland sounds extremely interesting... specially if it, even if only an aside, touches on differing legal traditions (a world shaped after western legality and one after old chinese legality)

Is that "Hammer's Slammers" David Drake, then?

Talwar said:
Is that "Hammer's Slammers" David Drake, then?
Click to expand...

One and the same. I was a huge fan of his work back in the day. He did a novel with Karl Edward Wagner, Killer, that I still cherish to this day. And he did terrific stories. Then one day, I read another collaboration with one of these military SF writers about Byzantine General, Belisarius, and ouch! We all have missteps. Still a terrific writer and a terrific thoughtful guy.

I binged this TL like a month ago, and it's truly one of the forum's crowning achievements.

Since there's activity in thread again, I thought I might drop by to say this

Congratulations on a job well done!

It's me again. First, this isn't a real update. I'm absolutely sorry about that. I feel terrible. And it's not even insincere. I loved doing this timeline and I'm distressed that life has kept me away from it. I mean Gosh, we're just on the threshold of really interesting stuff in terms of the Thule/Euro interactions.

Anyway, mostly I do these ebooks and no one notices. Which is fine, they're out in the world. But I just published a book - Axis of Andes, which got a fantastic review in Amazing Stories, so I want to share it. 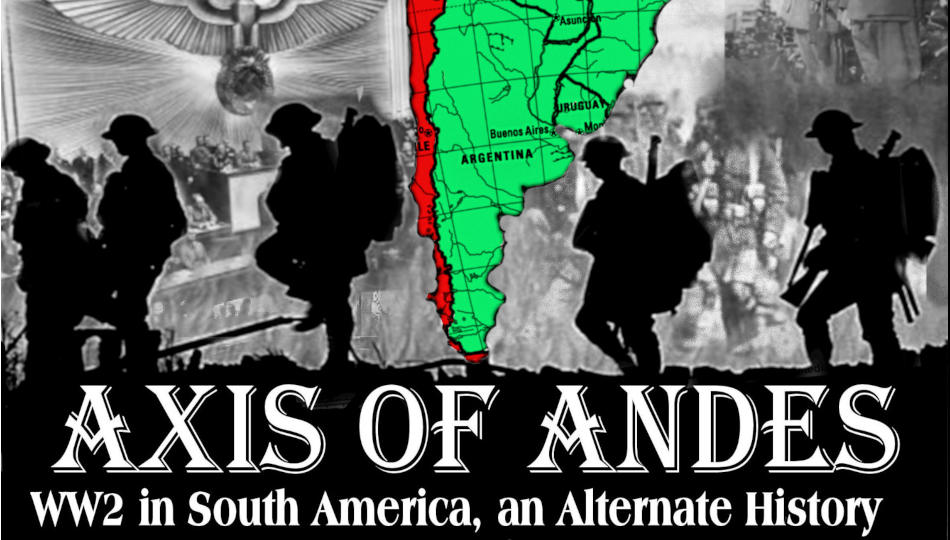 ...amount(s) to the contents of a history text book packed with concise detail and explanation of situation and events. Since this book begins with genuine history going as far back as the wars of independence from Spain...only gradually slips into alternate history mode... some readers...

Also, I made the Amazon hot new releases list! Yay!

Technically, it's the Hot New Releases in Science Fiction Alternative History, so a subgenre of a subgenre. And technically, I'm 55 on the list. So not getting a swelled head. But on the other hand, its a list of 100,, so suck it 45 lower ranking losers. And just about everyone ahead of me is either a major publisher or a well known medium or small press, and the guys ahead of me are people like Ken Follet, Charles Stross, William Dietz and Steve Stirling, so the fact that I'm even in the crowd is fun.

So... I'm feeling good, and I just wanted to come and share it. I tend to be cautious about shameless self promotion on this forum. I figure you can all live a long time without me pitching books at you. But this seemed like it was worth breaking the personal rule.

Axis of Andes is an alternate history novel which opens with Hitler receiving a delegation from Ecuador in 1937. Three years after that fateful meeting the Continent of South America is a blazing conflagration of war, and Latin America is a new third theatre of World War II. I'm proud of it. Feel free to buy it!

Or if you feel like saving a couple of bucks, look up the original first draft version I did as a timeline on this site. The final version is considerably expanded and revised, but a lot of it is pretty much the same.

As it turned out, my final version of the novel ran about 180,000 words, so I divided it into two books. The second, New World's War comes out at the end of this month, beginning of the next.

Anyway, wonderful to see you all.

DValdron said:
Anyway, mostly I do these ebooks and no one notices. Which is fine, they're out in the world. But I just published a book - Axis of Andes, which got a fantastic review in Amazing Stories, so I want to share it.
Click to expand...

I remember that TL

DValdron said:
and the guys ahead of me are people like Ken Follet, Charles Stross, William Dietz and Steve Stirling
Click to expand...

The fact that you are even in that crowd is amazing. Congrats.
Last edited: Jun 11, 2021

Glad you are getting the kudos/enjoying the success that you so deserve: Axis of the Andes was a real classic, and greatly enjoyed every post of Ice and Mice. I will be looking for both A of A novels on future excursions to Barnes & Noble...

E-Man said:
Glad you are getting the kudos/enjoying the success that you so deserve: Axis of the Andes was a real classic, and greatly enjoyed every post of Ice and Mice. I will be looking for both A of A novels on future excursions to Barnes & Noble...
Click to expand...

Well, it's an Ebook on their platform. I'd have to have a major or mid-level publisher behind me to get into a Barnes & Noble.

LostinNewDelhi and Miner249er, I think the timeline is still up. Just use the search function. The Ebook is improved, with much more consistent writing, a present tense narrative, lost scenes restored, some scenes expanded, the 'rain forest war arc' filled out. But you can still read the raw draft and peoples comments.

Cheers, all the more to you. I vaguely remember reading Axis of Andes a while back, good to know some of the AH content creators are getting recognized. I'll check it out when I get around to it.

Also, If thread marking would be impossible due to DirtyCommie being the OP, could a story-only thread be possible?
You must log in or register to reply here.
Top
Share:
Share
Top