Hello people, as some of you may have noticed, I carried the ICS on the next phase, from the Color Scheme itself to the colored maps. So far I'm doing little except editing the maps already existing in NCS, however at this point my goal is to test the colors "on the field" so to speak. as the project marches on, further tweak may be needed to existing maps, and new ones may be required.

Since this has been advertised as "the color scheme for grimdark timelines", I decided to focus first on the most grim dark time period I can think of, the World Wars, starting with the first and then moving on to the second.
Let's begin.

Here is 1914, not much to add to what I did before, except tweaking some islands. To avoid adding new colors to an already broad scheme, I tried to be creative. I mentioned using the English colors for British dominion, and I had to come up for some creative solutions for China.
More on that later 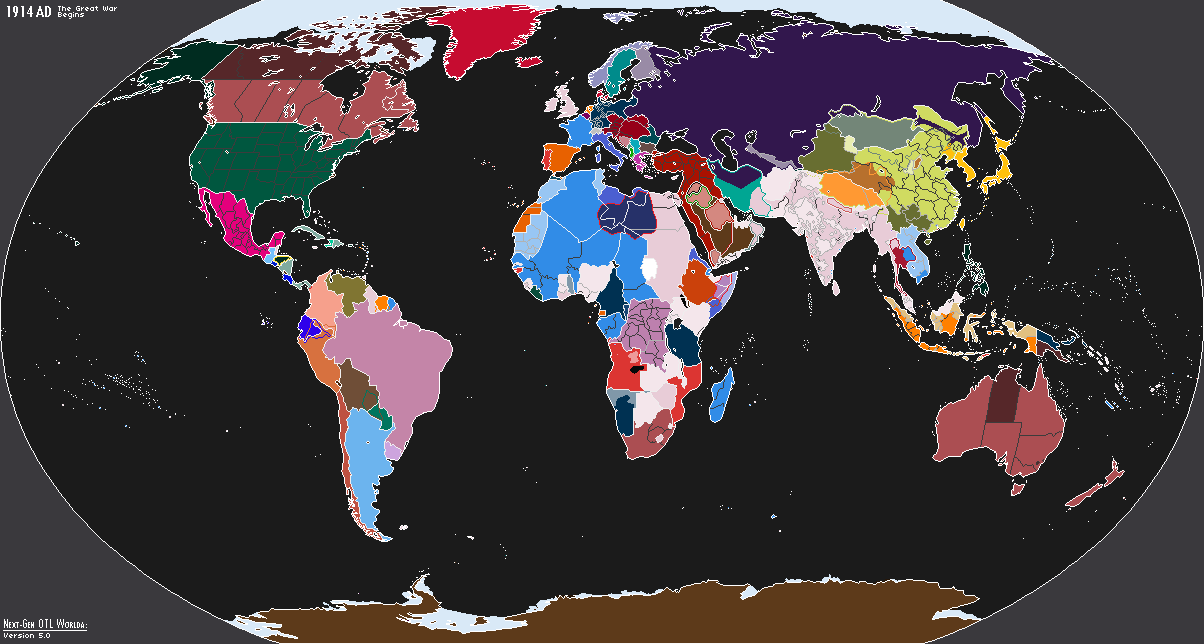 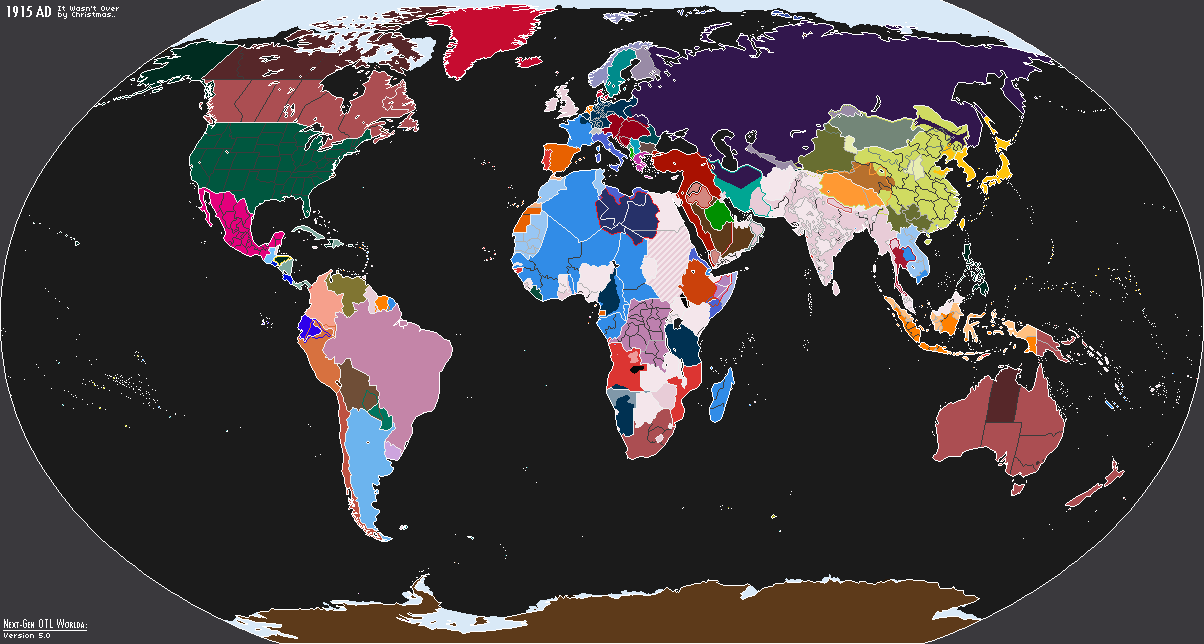 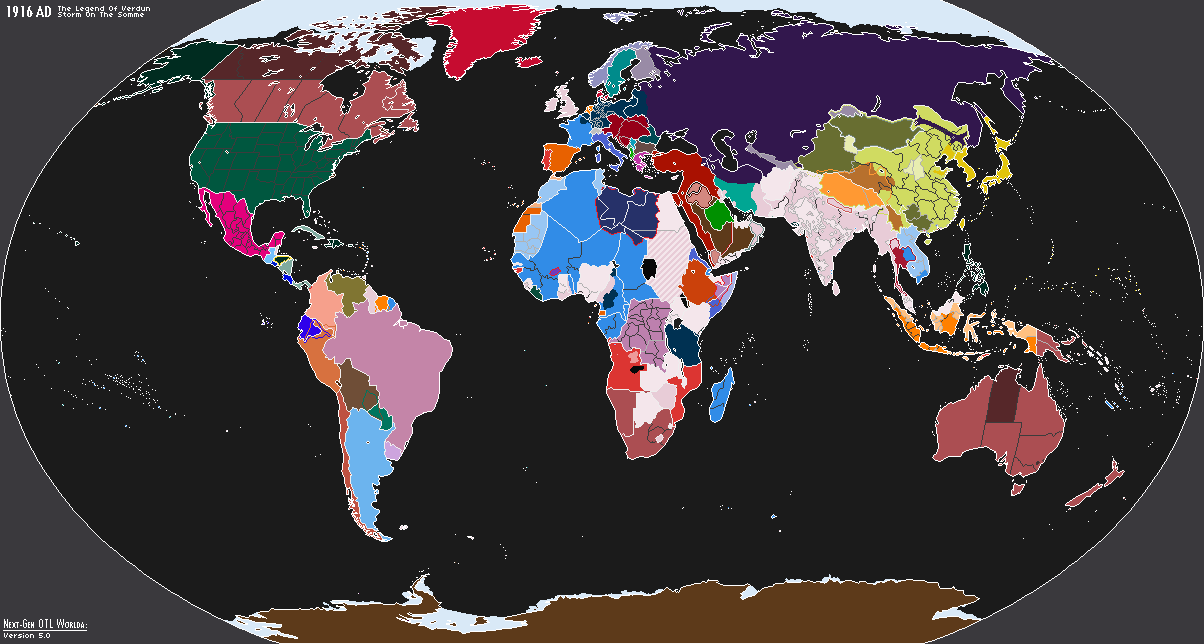 Here is 1917. I'm not sure, I sort of know of an attempt to restore Emperor Pu Yi to the throne that year, so I represented it with a lighter version of the Manchu color, which came somewhat closer, but not identical, to the warlords color. Which is just as well I guess, as like in any civil war, it's not too easy to tell the difference between rightful overlord and warlord.... 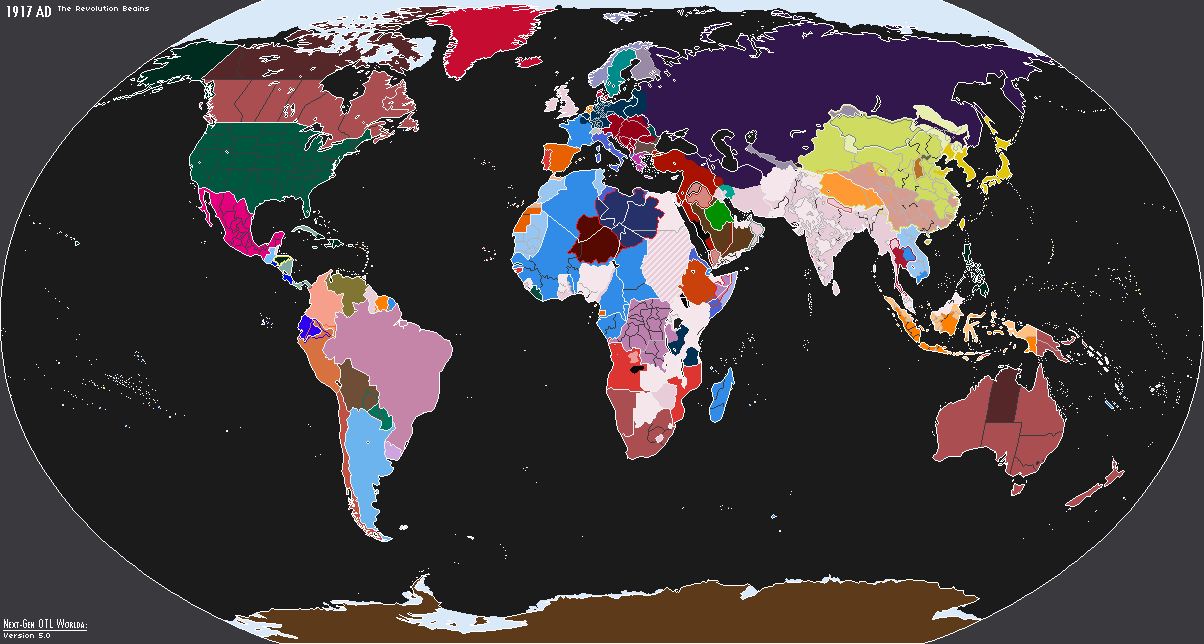 Finally, 1918. As China further fragmented, I was at a kind of a loss. In the end, I decided to use Han Purple to represent, I dont know, some sort of ultranationalist faction not affiliated with the official government. I think I hit the nail on the head, as China really looks screwed. Russia also looks like having seen better days.
What do you think? 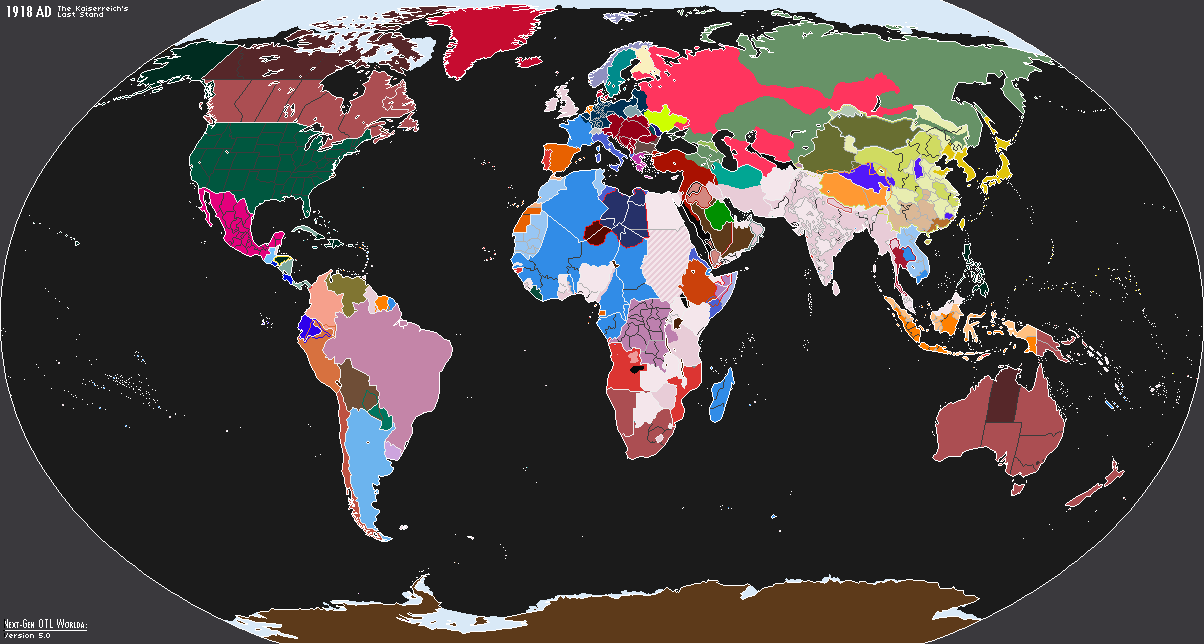 That's it for now. do you see any mistakes, or would you have done something differently?

Lord Hastur of Carcosa said:
That's it for now. do you see any mistakes, or would you have done something differently?
Click to expand...

I think you should specify the days at which events are happening, especially for 1918, the date where every ideological group and their mother declared some independent state

Sharklord1 said:
I think you should specify the days at which events are happening, especially for 1918, the date where every ideological group and their mother declared some independent state
Click to expand...

Usually the standard Worlda are all set on January the 1st, unless otherwise stated

What do you think of this cyber-effect? (still working on the fine details, a couple of lakes in Canada may be off).
Special thanks to @kokesherus 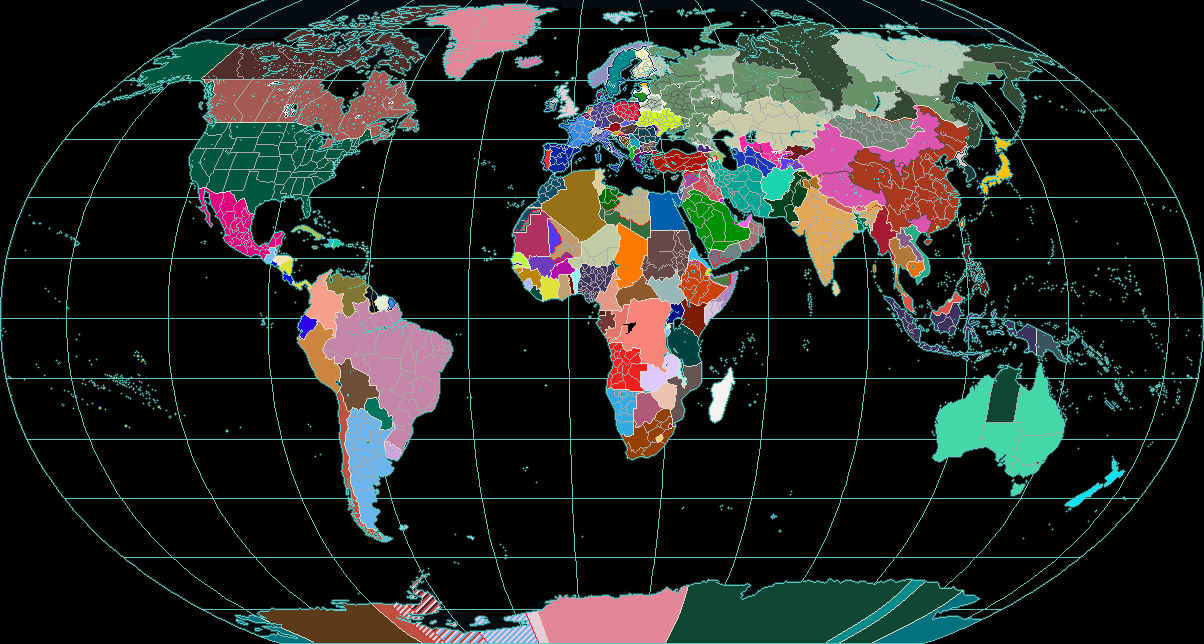 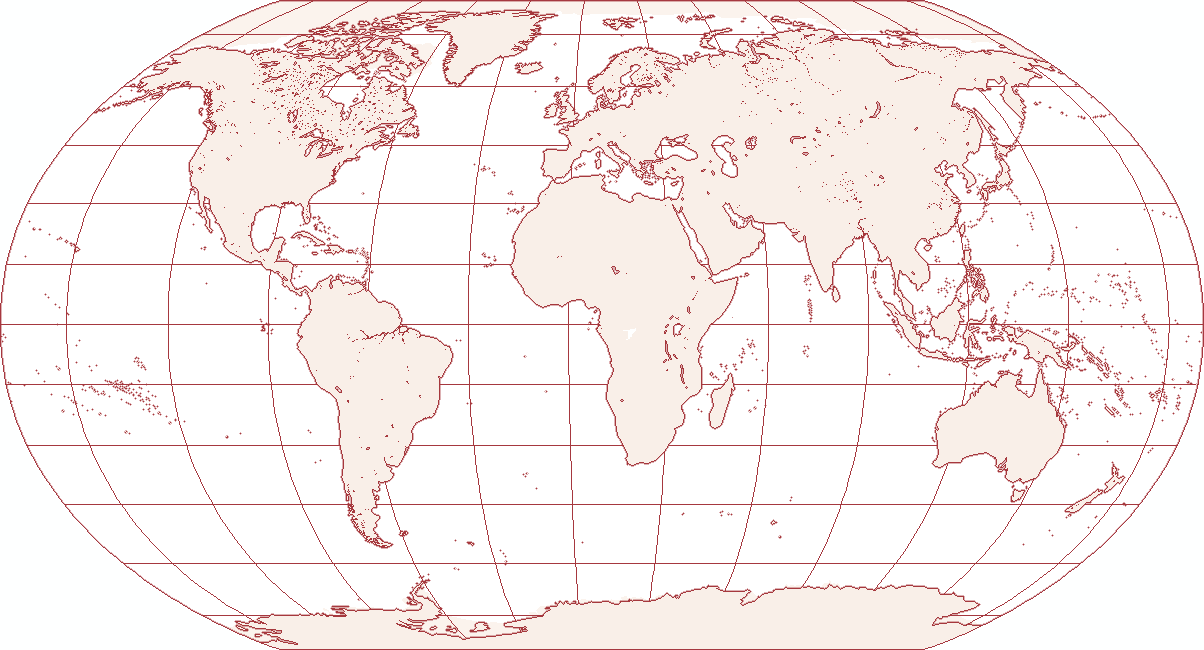 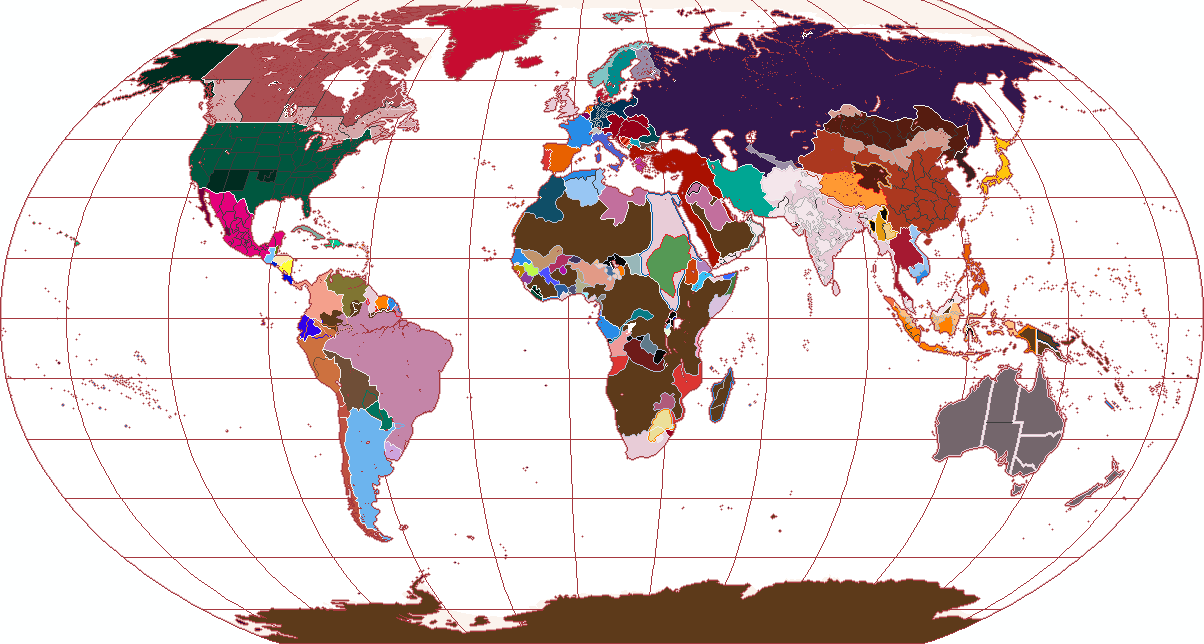 Here is 1939.
Nazi Germany has its own color, but I gave it a gothic/HRE outline to represent its wannabe empire status. Fascist Italy uses the standard Italian color, but I outlined it and its possessions with dark roman purple, for the same reason.
China has the warlords color, but I used an outline on some parts of it, mostly Mongolia and the Uyghurs, and Tuva.
Not much else to say, for now 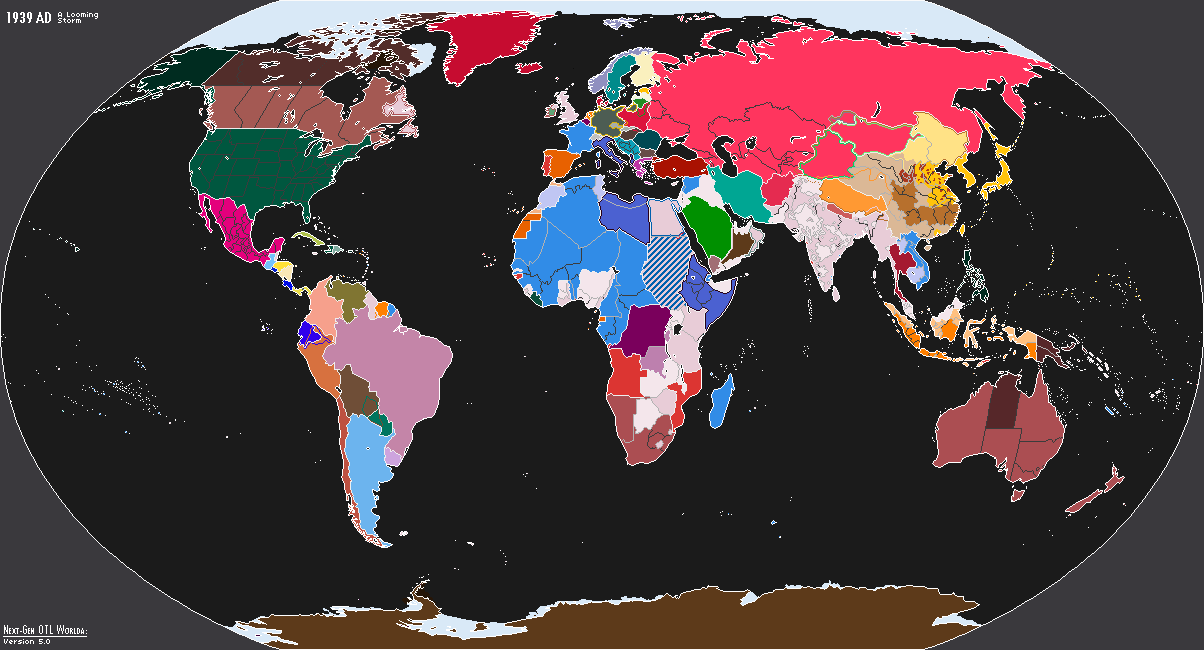 1940. Switched the warlords color for inner/radical China, but kept the warlord outline in the southern regions. Not much else so far, besides Germany and the U.S.S.R. carving out Poland; the major kicks shall have to wait for the next map 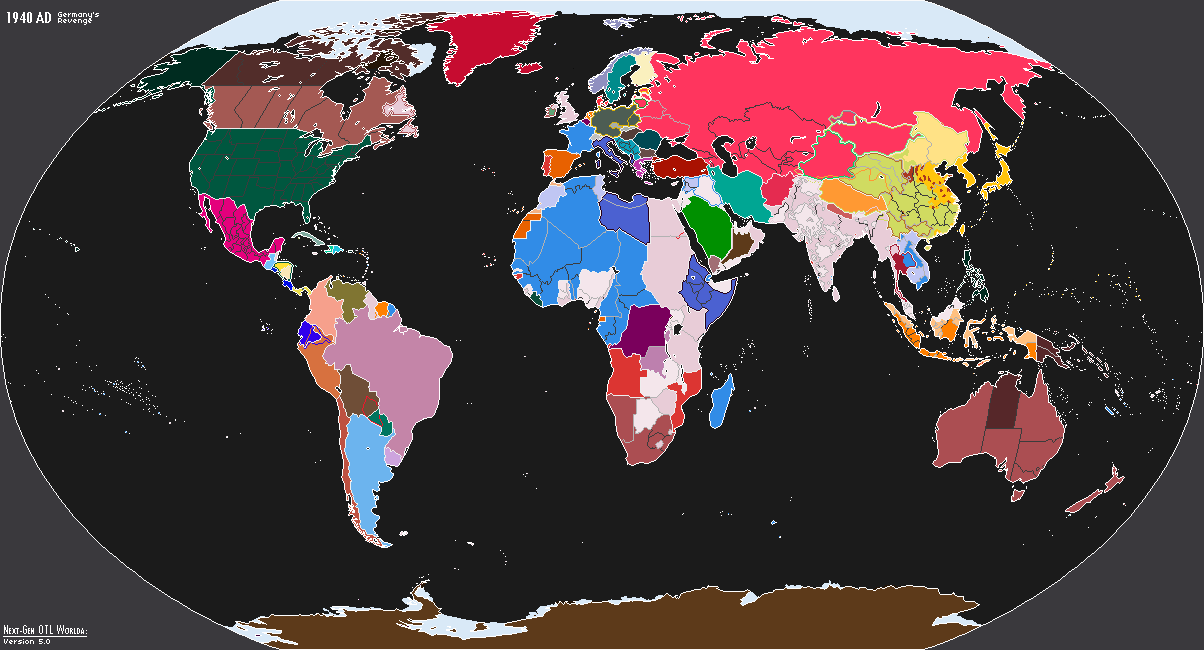 Here it is: I put some outline on the main Axis Power and satellites, because I think Nazi Ideology was a lot about delusions. The Italians deluded themselves that they were Ancient Rome, or New Rome or whatever, the Germans deluded themselves that they were the mighty Nibelungs, or the Holy Roman Empire or something, the various Axis satellites, mainly Hungary, Romania and Bulgaria (and from '43 Italy as well) deluded themselves that they mattered.
The real innovation making its first appearance in this map though, is the reverse French Blue that I use for Radical France: I originally thought for Revolutionary France, but it works for Vichy, adding a Gothic outline to represent its status as German Collaborationist. As a side effect, French Colonial Empire is split in two, which makes it possible to show the anomalous situation in Morocco and Tunisia (which becomes important in the next map). 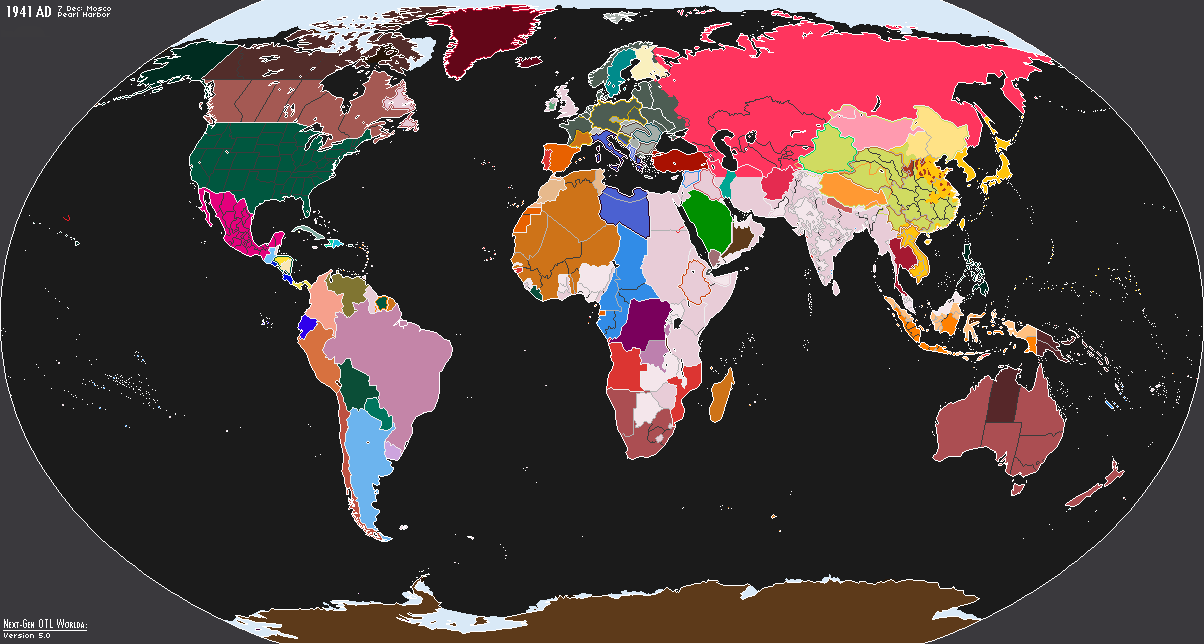 The last map prompted me to ask a "What if" Question: I had Nazi Germany and Radical France in the same map, as well as a Spain still using the Imperial color, and I also had a color for Radical Poland, Radical Ireland (I.R.A.) and I realized could use the Spartan color for Radical Greece. So, I just tweaked the 2022 map into a Conspirationist EU scenario (I don't endorse anything of that crap, but it makes for a good map): 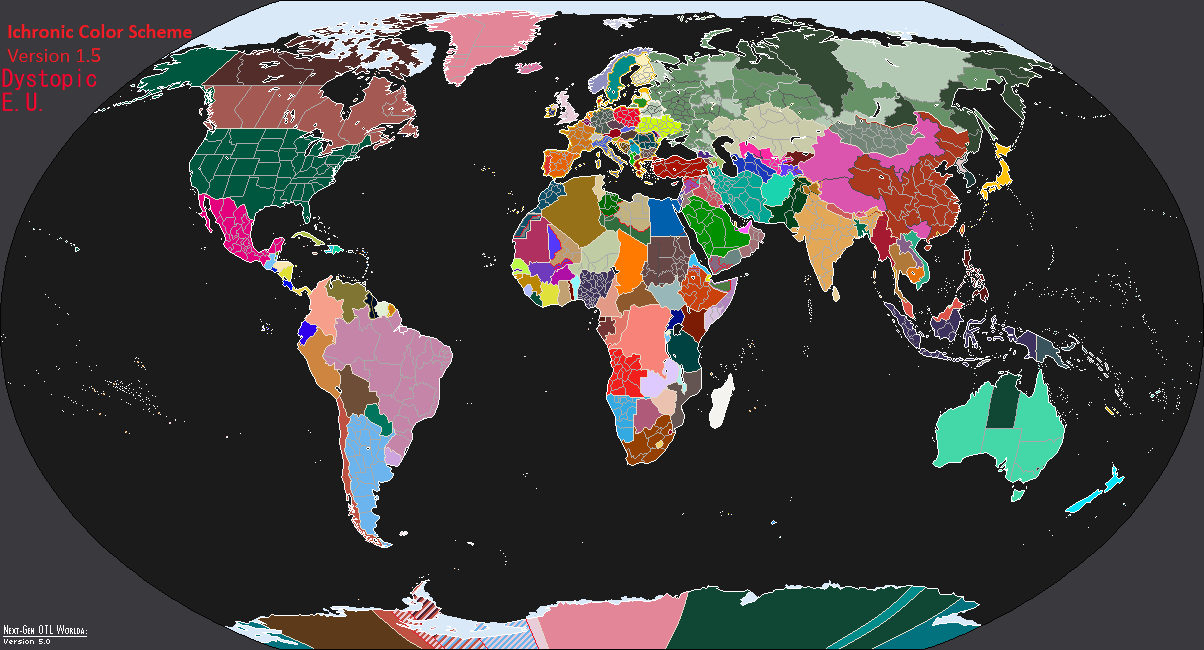 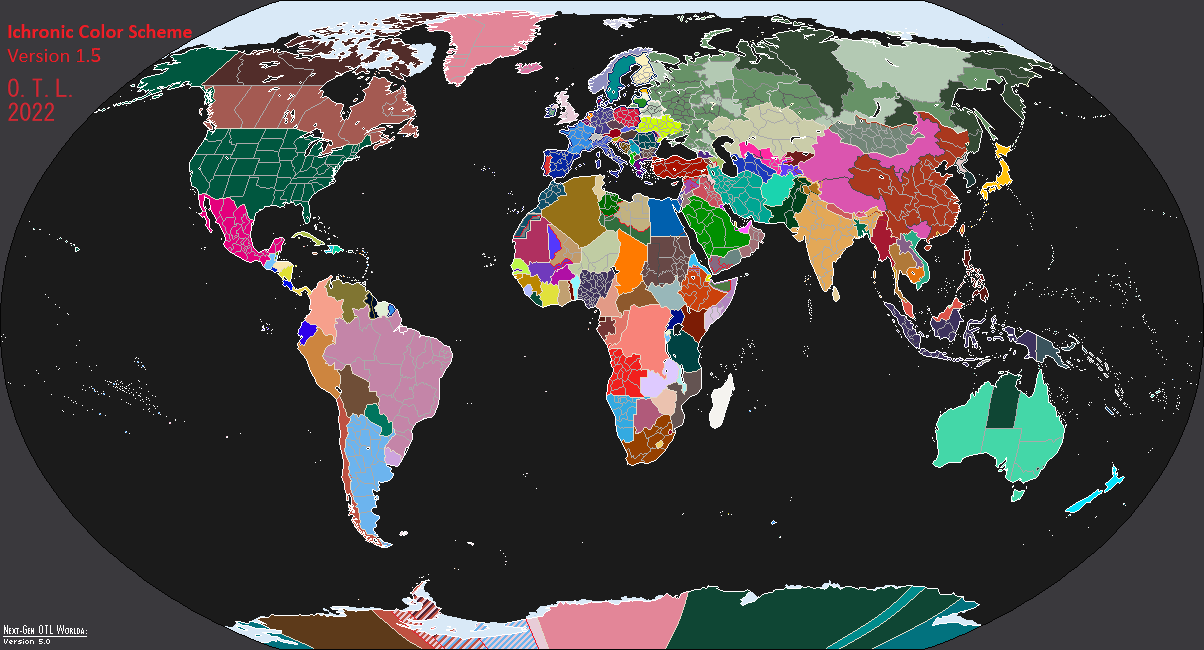 Then I realized that this map already features Radical Russia, and China is, well China, so I just had to add a Radical Technocratic U.S.A. to get a complete scenario: 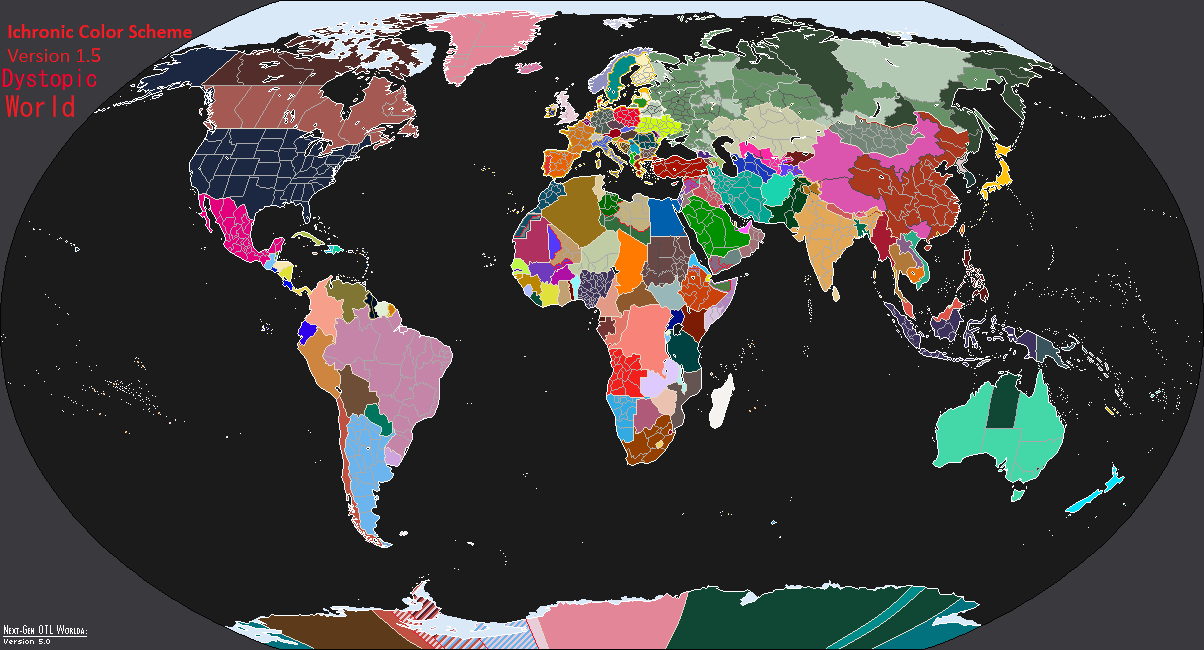 But something was still missing. This scenario sounded vaguely cyberpunkish to me, so I added a Cyberpunk FX. But to go fully Cyberpunk I also needed Corporate Japan. So: 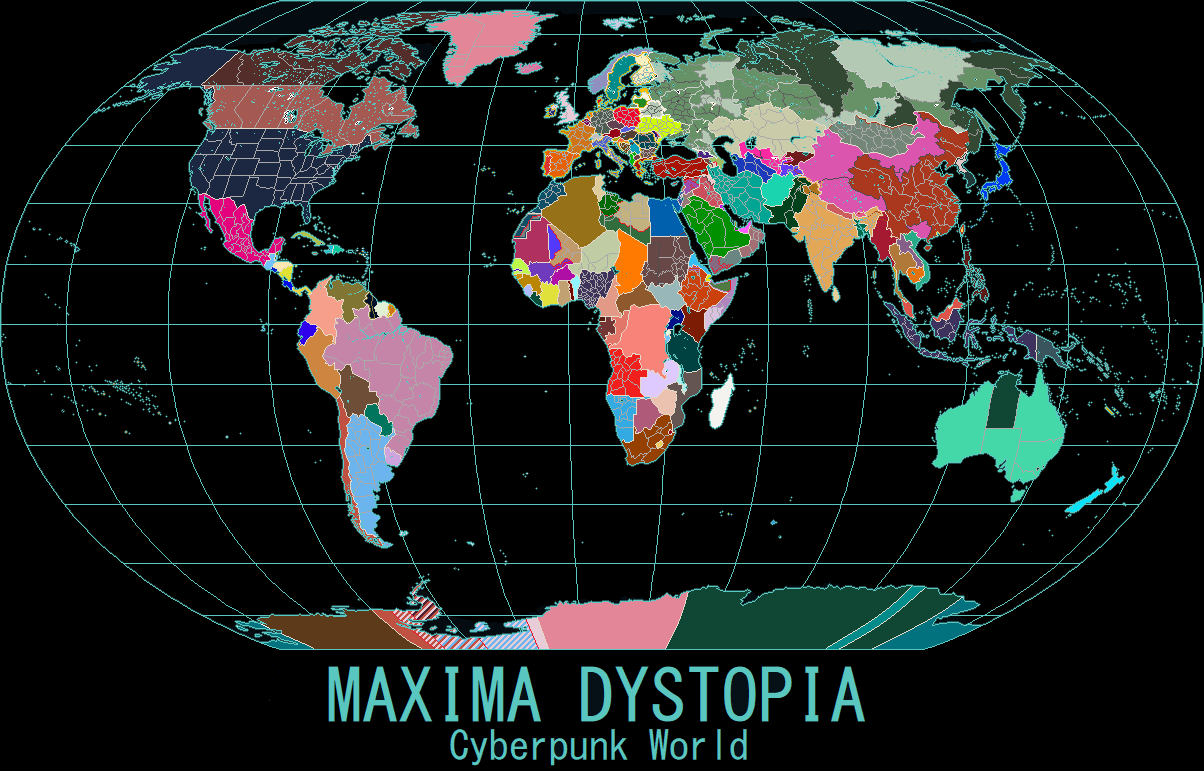 0n the 1941 map Bolivia is the wrong color. Here is the correct one 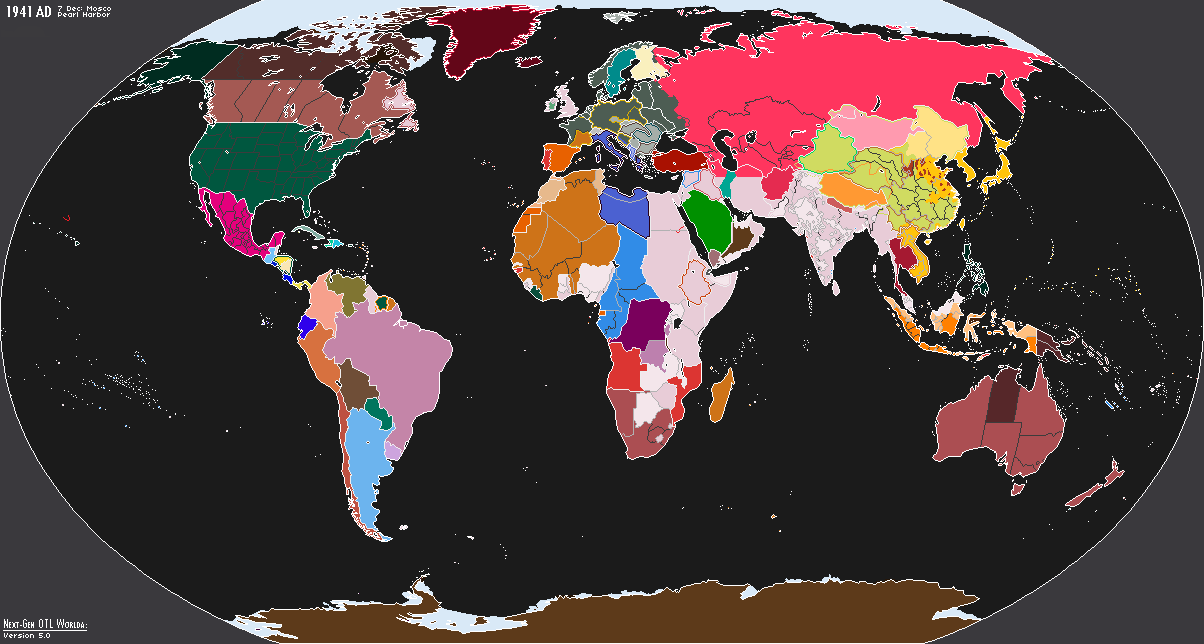 1942. This is the Casablanca Scenario: the Us has entered the conflict, but the Axis is still advancing. Vichy France has been occupied, but the French Outremer has not been fully integrated yet; Morocco, as a protectorate, has its own separate police with its own jurisdiction, so many use it as an escape route. Meanwhile on the Pacific, things heat up... 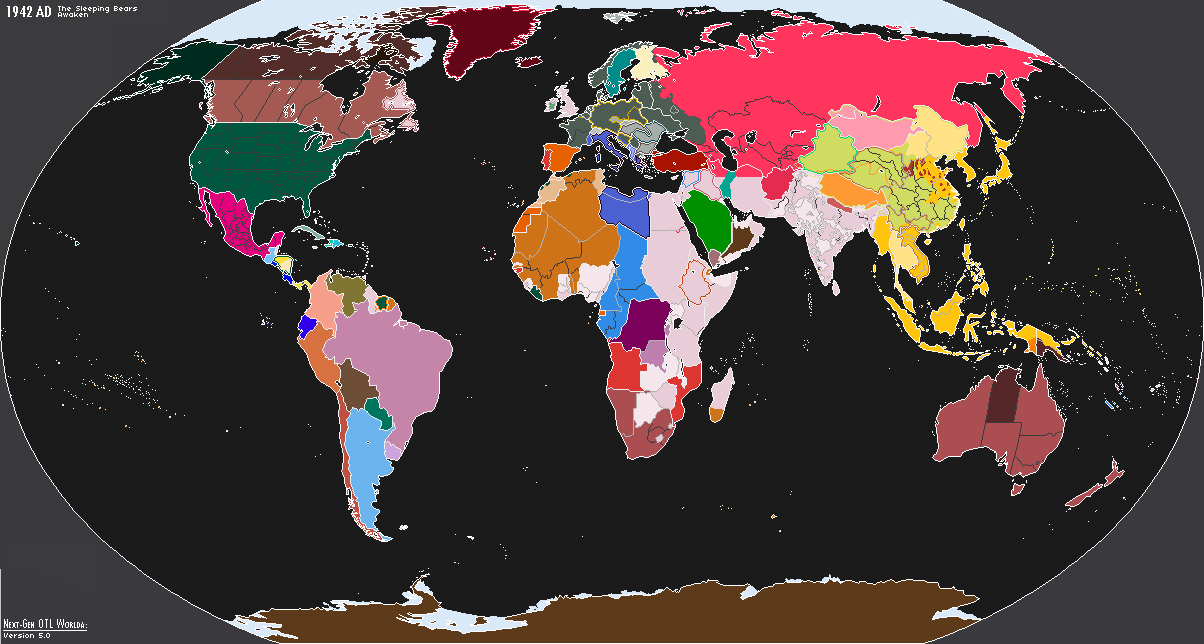 And finally, what do you think of this format for ICS maps? I call it Ultramunda 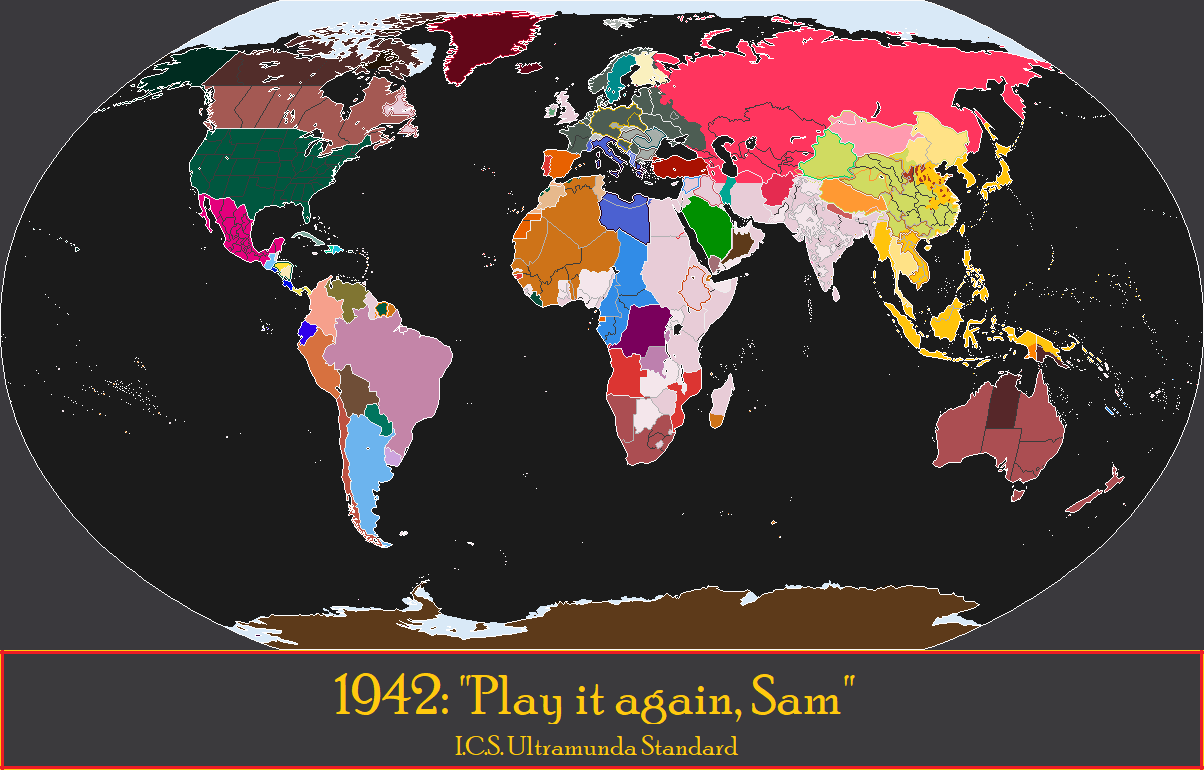 Do you think it looks better with smaller fonts? 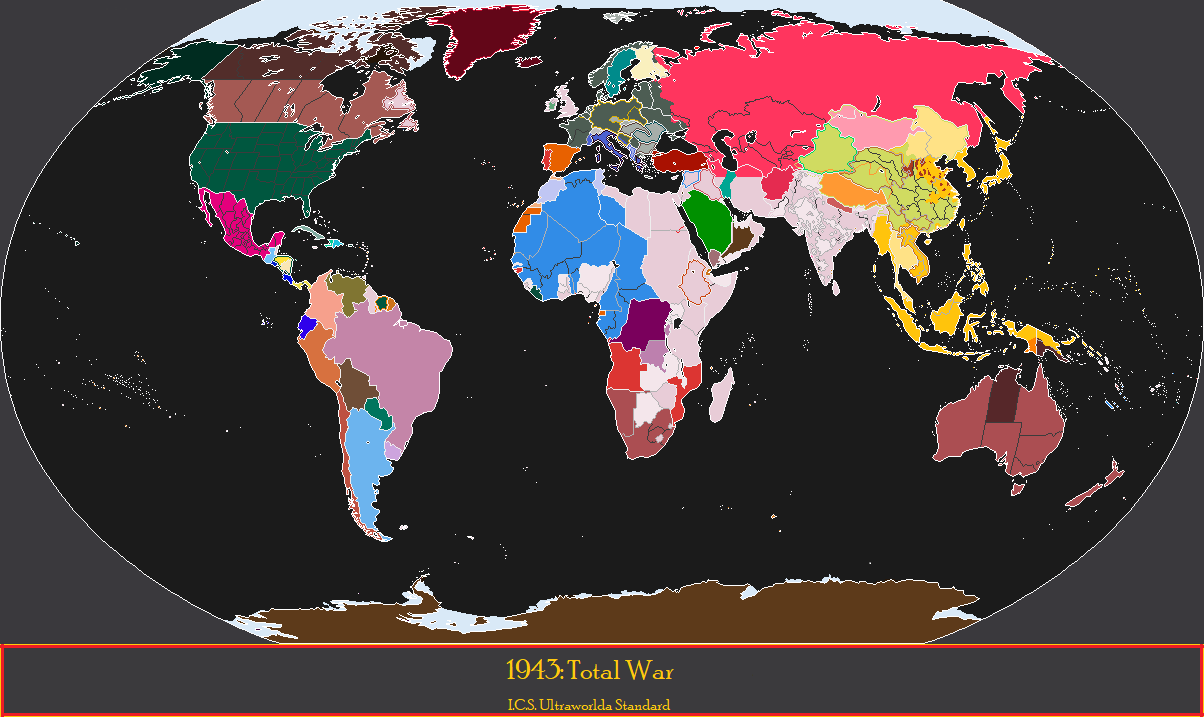