How to avoid the development of nuclear bombs, if nuclear fission still discovered.

VVD0D95 said:
Well my original intention was to prevent nukes ever existing, but that requires a pod much further back than the idea I’m considering I think.
Click to expand...

The problem is that nuclear bombs being possible is a fundamental fact of the laws of the universe. As long as physics works the way it does they are possible. This isn't something that can be changed outside of ASB.

Legofan4 said:
The problem is that nuclear bombs being possible is a fundamental fact of the laws of the universe. As long as physics works the way it does they are possible. This isn't something that can be changed outside of ASB.
Click to expand...

Being possible? Yes. Existing? Only if the conditions exist for someone to decide to create them.

VVD0D95 said:
Being possible? Yes. Existing? Only if the conditions exist for someone to decide to create them.
Click to expand...

Yeah, but those conditions are, frankly, incredibly wide supposing you have a modern technological civilization. They're just not that hard to make once you have the prerequisites, rather like grenades.

Peg Leg Pom said:
But you could still manage to irradiate a fair number of people if something went wrong. . Now suppose that the Chicago pile had been in UCLA instead and there was an earthquake during a test. Nothing major as such things go but enough to make the scientists make a mistake. A couple of dozen bright students in a prominent university dying of radiation sickness after a cocked up experiment is going to make the news.
Click to expand...

Recall this was a time when Your day to day exposure was very high compared to today, with Radium painted dials on many clocks and watches, and X-ray Machines in many Shoe stores, for that 'Perfect Fit' 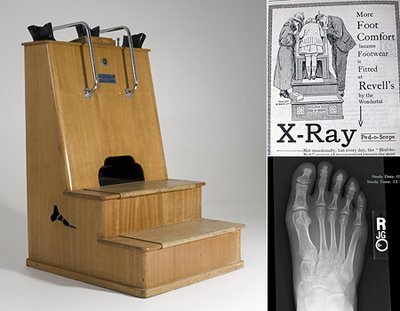 To Fluoroscopes in many manufacturing process.
A 200WPile?
That was nothing.

Look what happened to the Curie Family. Both got Radiation Burns, multiple times.
People were not as worried about safety as they should have.
It wouldn't be to the '60s were Government would step in on unsafe practices

I agree that it's not realistic to stop development but delay is possible.
The easiest case would be some authority figure miscalculating the amount of uranium required for a bomb. Since uranium enrichment is relatively straightforward but needs a lot of power and space for the separation equipment it looks impractical, so people don't try. Would Manhattan project have been pursued if critical mass was believed to be 10x more than it really was? A side effect of this error is that more dangerous partial reactions would occur because people would store and handle larger masses without realising, and this may deter the survivors. Of course it may also show there's something wrong with accepted wisdom and prompt another look. This would happen anyway, and probably sooner rather than later because everbody knew that existing knowledge was incomplete.
OTL the German bomb was delayed partly by miscalculating critical mass, and partly by shortfall in resources, while the Japanese lacked the resources. Infighting and perceived lack of need also played a part.
Delivery systems also need to be developed and air superiority attained, or you'll need a sub on a suicide mission to get to the target port city. This could also make it look impractical enough that you spend your effort elsewhere.
So for me, delaying nukes is possible but not for long (my guess would by <5 years (started during the war but not ready in time) or maybe 20 years or so if not started until after the war (this assumes that the urgency to justify Manhatten project would be less post-war than OTL.

VVD0D95 said:
I ask because I'm trying to come up with a way in which we avoid the development of the a-bomb and what to explore what consequences there are from this.
Click to expand...

There were proposals OTL like the Baruch Plan to give the UN a monopoly on atomic energy. Unfortunately it didn’t work out, but maybe something like that could delay countries trying to acquire their own nuclear weapons? Its probably going to be hard to stop any country that’s both strong enough to get them, and has a powerful neighbour that gives them a motivation to want them.

Donor
You can delay it a bit but mot a long time. And the big powers are notr going to want to give up the “safty” of having a Nuke. Nukes make the ultimate fall back to ensure your country is not invaded Giving them to the UN is not garrentee that your enemy will get nuked if the invade you.

DougM said:
You can delay it a bit but mot a long time. And the big powers are notr going to want to give up the “safty” of having a Nuke. Nukes make the ultimate fall back to ensure your country is not invaded Giving them to the UN is not garrentee that your enemy will get nuked if the invade you.
Click to expand...

Nukes are perceived like that because they're perceived as doomsday weapons, but for instance North Korea didn't need nuclear weapons to ensure they were never really invaded after 1953 since they could turn Seoul into a sea of flames whenever they felt like it with their conventional artillery plus chemical weapons. To DPRK, nuclear weapons were an extra bargaining chip. Israel probably could also have gotten by with chemical weapons alone for its "Samson option", along with conventional weapons for a mission like destroying the Aswan dams in Egypt (which would probably cause nuclear-level destruction).

Donor
Yes but if you enemy is not that vulnerable then Nukes ARE useful as the ultimate fall back.
If you are the US for instance you are not typically worried about Canada or Mexico or Cuba. You are worried about the USSR or a potential new power trying something like Nazi Germany had tried.
England is not worried about France…. And France is worried about the superpowers. If the USSR starts west in 1961 and the US and GB stay out of it, France is probably in BIG trouble. So having Nukes is useful. If France had nukes in 40 they would not have been occupied.

It turns it into the “you can kill me, but you can’t take me over“ kind of thing. and this is useful (as France, England, India etc… can tell you.

And having Nukes under the control of the UN is basically useless as you are not getting them to protect you from one of the big powers as eith they have veto ability or enough Allie’s to delay the launch.
You must log in or register to reply here.
Top
Share:
Share
Top