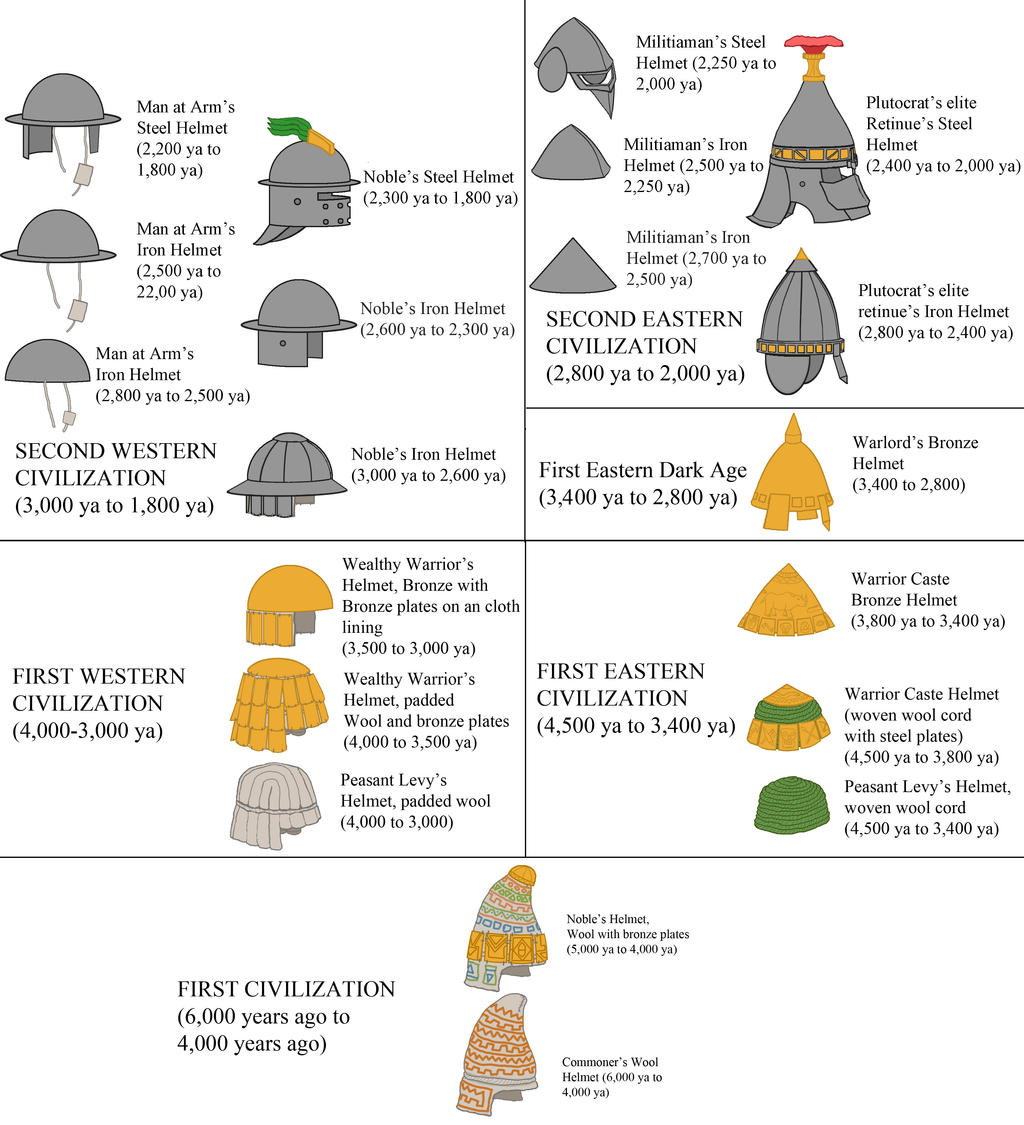 The evolution of helmets over some 4,200 years on a fictional continent.

First Civilization (C1): Emerging from small clans of neolithic farmers, the First Civilization developed thanks to improvements in agriculture (new strains of crops, new tools, the first ships and irrigation) which allowed for a steady population increase between 6,200 to 4,000. Those clans which mastered this process first expanded in size, built fortified communities resistant to raids and soon overwhelmed and assimilated their neighbors and built cities of adobe, wood and stone. The end result was the creation of numerous city states and small kingdoms ruled by kings and run a mixture of priests, hereditary nobles and (latter) scribes. These city states gradually refined their technology developing basic mathmatics, primitive systems of writing, architecture and bronze working.

Armies at this time were composed of a mixture of levied peasants led into battle by people of the noble class, fighting with spears, shields of leather, wood and wicker, axes, bows, slings, javelins and a variety of primitive bronze swords. Armor was limited to padded linen and wool painted with geometric patterns. Bronze plates towards the latter year of the first civilization were affixed to cloth armor, though more for decoration than for protection.

A mixture of colonists sent out to claim new lands as well as refugees displaced by war were constantly moving outward of the established borders of the First Civilization. At the same time merchants sought out other neolithic and copper age tribal cultures and brought with them the inventions and methods which made the first civilization great. The core areas of the First Civilization would see the rise of the first major cities, but would eventually stagnate.

First Eastern Civilization (EC1): Around 5,000 to 4,750 years ago, peoples from the first civilization crossed the eastern mountains. Such a crossing was difficult at the time. More migrations of peoples than not failed and those which did not fail were diminished. Even so, enough did make the crossing to set up a few enclaves of the First Civilization though not enough to overwhelm the local peoples entirely, who traded and fought with them. This is dimly remembered in the Religions of the region to this day as the war of the dawn times between the uncorrupted first peoples and the armies of the demon men who brought with them sin, but were defeated by the heroes of the era. Even so, after the downfall of the colonists 4,500 years ago the natives had taken to writing, forging bronze and building, leading to the rise of the First Eastern Civilization.

Unlike the First Civilization, the Eastern Civilization emerged as being distinctly Theocratic with a clearly defined caste system led by priests under who's authority were Scribes, Warriors, Artisans, Peasants and an undercaste doing dirty jobs as well as jobs which were dimly viewed by the religion, including serving as merchants. It spread fairly far and gave rise to a number of Kingdoms, which soon turned against each other over petty matters of theology. The armies of the First Eastern Civilization were at first composed of light melee infantry composed of peasant levies backed up by warrior caste archers (some of which being mounted on elephants) with phalanxes of heavy spear infantry clad in padded wool armor (and latter bronze armor) and chariot mounted archers becoming more and more important as time went on. Helmets recovered in grave goods are almost always adorned with a variety of etched images as well as plates welded onto the brim in the case of latter examples.

The biggest key diference between The First Civilization and The First Western Civilization is in the nature of their government. While C1 was ruled by hereditary monarchs, WC1 had Leaders appointed by and accountable to councils of prominent figures. This included wealthy landowners, accomplished warriors, representatives from towns, religious leaders and famous philosophers and wise men. Warfare was the easiest way of gaining high station and the First Western civilization and war was common. Slavery was also used to a more extensive degree than was done by the First Civilization.

As mentioned the chariot was a core element of the armies of WC1, generally as archers and javaliniers. This encouraged the development of scale armor. These were backed up by light and heavy infantry, usually armed with halberds and spears. Several times the First Eastern Civilization faced invasion from the west, though these never had a foothold in the east that lasted more than a decade or two.

First Eastern Dark Age (EDA1): 3,400 years ago, much of the First Eastern Civilization was aflicted by several years of drought (as well as associated plagues) in the aftermath of a period of intense warfare which saw the destruction of several prominent cities as well as irrigation systems. This was followed by incursions by barbarian hosts from the north. Many people viewed this as the end of the world leading to violence and religious upheaval, as well as the breakdown of many governments. Over a span of thirty years EC1's population was reduced by 50-60% and for the most part government regressed to simple warlordism for the next six centuries.

During this time metallic armor became less common as their were less smiths to work it and trade became far more dangerous. Never the less, many warlords did make use of it as much as symbol of wealth to inspire loyalty to their troops. Like EC1 helmets these were conical. Around 3,100, practical ironworking began to emerge among these Dark Age peoples for tools and weapons. It would be some time before Iron Armor was adopted, however.

Second Western Civilization (WC2): The Decline and eventual demise of the First Western Civilization was a less dramatic affair than that of it's eastern contemporary, taking place over centuries. Gradually the slave population came to constitute an increasingly large section of the population of most of the WC1's population while the members of the ruling councils involved in selecting leaders became more and more hereditary in nature. Other contributing factors was the rise of the island based Pirate Lords disrupting trade, northern barbarian raids, the outbreak of plagues and the lands far away from the core of WC1 becoming more culturally and linguistically distinct. Never the less, the death blow to WC1 was the Four legendary servile wars which led to the downfall of it's cultural center 3140 to 3070, the rise of the United Pantheon (who's commandments included a prohibition against slavery) between 3200 to 3000 and in particular its championing by the Prophet King (approximately 3050 ya to 2980 ya) and his disciples backed up by fanatical legions of iron weapon equipped soldiers and cavalry drawn from northern horsefolk.

The Second Western civilization saw to a formal restoration to dynastic monarchy as well as feudalism. Though the Holy Domain of the Prophet King lasted less than 150 years before breaking down due to infighting, it did rework society along more structured lines while doing away with the old systems of slavery. The land was divided into fiefs and put under the control of low ranking nobles which swore fealty to lords, who swore fealty to higher ranking lords, who swore fealty to kings. Backing up these nobles were Men-at-Arms, common soldiers retained, trained and recruited by. There were a few kingdoms in which elected monarchies persisted. Much of these lands were united under the aegis of the High Kingdom between 2,800 and 2,400 led by the King of Kings thanks to the introduction of the stirrup and the rise of heavy cavalry and the importation of crossbows from the east.

The rise of WC2 saw the rise of widespread use of iron armor. While iron swords, spearheads and axeheads were used by WC1 in the last three centuries, Iron Armor was rare and usually a novelty rather than practical gear and was usually dismissed as being inferior to bronze.

Second Eastern Civilization (EC2): The driving force behind the ending of the First Eastern Dark Age was the emergence of reliable maritime trade with the west. Around 2950 years ago island states populated by raiders began to use their skills at sea to send their flat bottomed ships off to foreign ports and have them return with valuable goods. This trade built up their wealth and influence and eventually led them to set up colonies along the coastline which would push up along the rivers and into formally underdeveloped regions. Moreover, the new merchant princes supported the emergence of new religions, ones which were more amenable to trade than the old caste based ones of EC1 and with them gained the clout to cease power. Even though a few old holdouts of the EC1 resisted, eventually the First Eastern Dark Age ended with the birth of the Second Eastern Civilization.

In the Second Eastern Civilization power belonged in the hands of the wealthy. The wealthiest citizens could bid for seats on ruling councils and elected from their ranks Archons to lead them. They also had duties to defend their cities, retaining companies of fighting men while serving as generals and providing warships to their navies. At the same time, those citizens who could afford to arm and armor themselves were required to serve in militias to provide additional manpower.

The role of chariots declined to that of a mobile platform for the as the armies of the EC2 were mostly composed of infantry with the occasional group of elephants for backup and a few horsemen for scouting. Iron Armor was cheaper than bronze and so was fairly readily adopted with little hesitation. The biggest innovation was that of the crossbow around 2700 years ago. 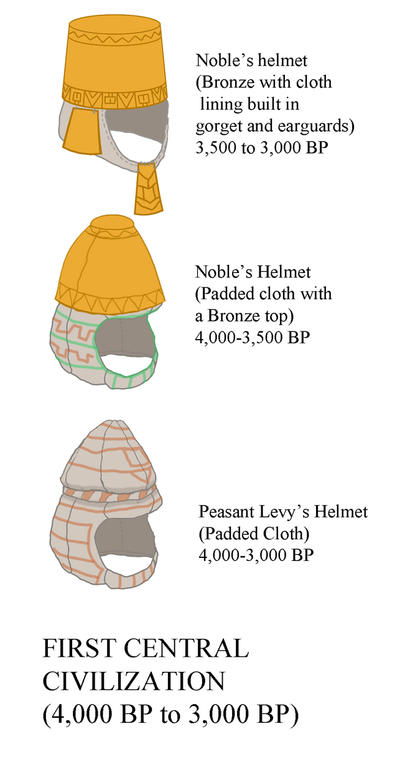 The First Central Civilization (CC1), also known as the Second Civilization (C2) was a remnant of the First Civilization. Several cities along the western foothills of the eastern mountain range managed to resist sacking and were burdened by refugees and were bolstered by displaced peoples fleeing the chariot mounted warriors of the emerging First Western Civilization. Eventually these surviving kingdoms formed into a protective alliance against incursion. This alliance was eventually worked into the religions of the member states.