Have the Rockwell B-1/B Lancer be more successful 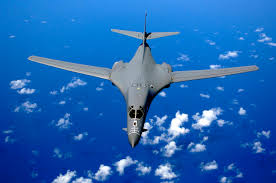 Have more produced to replace more if not all of the USAF's B-52 force.

Bonus points if you can get it into service with foreign air forces.

Have more produced to replace more if not all of the USAF's B-52 force.

Bonus points if you can get it into service with foreign air forces.

Maybe a more intense cold war confrontation with the Soviet Union perhaps combined with a perception that the B2 and Stealth was seen as being less promising (than in our time line) might prompt a larger B1B purchase ?

Maybe the historical move to bring a number of high yield B53 bombs back into service also leads to a desire to buy more penetrating bombers off the shelf ? (Perhaps a special variant of the B1B might have been acquired to deliver the B53 bomb in an alternate time line or all the B1's were modified to do so and more B1's were purchased to provide enough air frames to replace the B52 in that role ? (My understanding is that in our time line the B1 could not carry the B53 bomb.)

Perhaps for political reasons after the Titan missiles are retired the US decides they want a more viable way to deliver multi megaton bombs to the USSR in a WW3 scenario than relying on B52's in the late part of the cold war ? Due to arms control treaties the US decides they want special B1's for that mission that only count as carrying one warhead vis a vis arms control treaties ? This is in turn might lead to an additional buy of special B1's for that mission ?

There were good reasons Carter canceled the B1. Overcoming its cost/benefit ratio is tough. Better the funds had gone into other aircraft.

Someone I talked to a long time ago that was an AF veteran said that they were rather expensive beasts, and something of a maintenance nightmare to keep 'em flying... could be one reason the original order for, what, 243? Was cut back to 100...

Make the B-1A instead, price locked in and production started before Carter can kill it, but only reduce the number, that RR later restores

Fuzzy Dunlop said:
Bonus points if you can get it into service with foreign air forces.
Click to expand...

That is a tough one !
I would love to see the royal saudi airforce operate a few , flying against houthis in yemen !

The B-1A was fantastic but seen as inadequate to penetrate Soviet Air Defences. Mach 2 is useless against PVO defences in the wargames.
The B-1B was modified to have lower radar reflection and fly fast at very low levels to penetrate the Soviet defences. If they did a full penetration it would have been armed with 16 SRAM and 4 to 8 laydown nukes. This was the original plan. Then they realised they needed conventional capability.

When i look at the B-1B i see a platform with massive capacity that was not used. It's ability to carry huge weapon loads was poorly implemented and the avionics not updated properly.

The radar was based on an APG-66 from the F-16 C/D this means with the right additions to the software it can provide data for the AIM-120. What this means is with a full weapon load on a conventional penetration mission you have the possibility of the following weapons load.

The alternative is to have the B-1R brought into service.

If the cold war had been hotter with the USA dragged into say Iran/ Iraq it would be likely to have more built.

Have the B-2 Bomber fail.

In the mid-1980s, there was speculation that a further 100 B-1s were to be ordered as an insurance policy against the B-2 either being cancelled or failing to live up to expectations. These would have been either B-1Bs or B-1Cs (which had even more low-observable features). In the end, the Reagan administration decided to go for the B-2.

It is unlikely that the B-1 would have been exported, assuming there were any countries that could have afforded to buy the B-1. Successive US administrations have been very cagey about exporting strategically capable hardware, even to friendly countries. The last time they allowed the export of a strategic bomber was 70 years ago when the RAF too 88 B-29s which were then on the way out of US military service.

Seems like every dogfight account has over half the sidewinders and sparrows dropping like a rock or flying the opposite direction. Double the hit percentage and the brass might stay on the all missile / no gun design train.

More B-1s get built as AA missile trucks in lieu of fighters, with the nuclear plan being the AA trucks serve as escorts for the strike bombers.

alspug said:
Mach 2 is useless against PVO defences in the wargames.
Click to expand...

which era ? until early 80s a big percentage of PVO interceptors were barely able to inercept b fifty twos

And while calling B-1A unable to survive, expected the old subsonic for decades B-52 to be able to live long enough to launch Hound Dog cruise missiles that were retired in 1975. the role then passed onto the slightly supersonic B1B, with the original ALCM first flown in 1977, operational in 1981, and that wasn't the later far more capable later ALCM of the 1980s
The low level attack profile of the B-1B is odd, as would still need to use LABS or laydown weapons with very long delay for when the 'Dial-a-Yield' on even the lowest settings

Could you sell a monkey version to the Iraqis or Saudis? The opposition threat level is lower than the Soviets. The Israelis' won't like it but should have the capability to stop it. It ties up some allied oil nations with expensive US toys and forces the hostile ones to spend resources on Soviet AA, which is useless on the offense.
You must log in or register to reply here.
Top
Share:
Share
Top