Let us say that, in the future, some scientists have created satellites capable of something that seems science fiction for now—punching the walls of the universe to study an alternate reality. By that scenario, some hundreds of “alternate Earths” from hundreds of alternate universes would already have been discovered and meticulously studied. As much as half of them would still be ruled by humans, unfolded by events that turned out differently. One universe, for example, had an Earth where 9/11 never happened, or where the outcome of the Revolutionary and Civil Wars ended up differently.

One of the most interesting to note was a planet that scientists call “Alternate Earth 111”, known to the public as “Great Lakes Earth”.

Because at first glance, it seemed that almost every continent is dominated by lakes, even those larger than the Great Lakes that we have in North America. What is its history? What points of divergence would we expect to see in this particular variation? 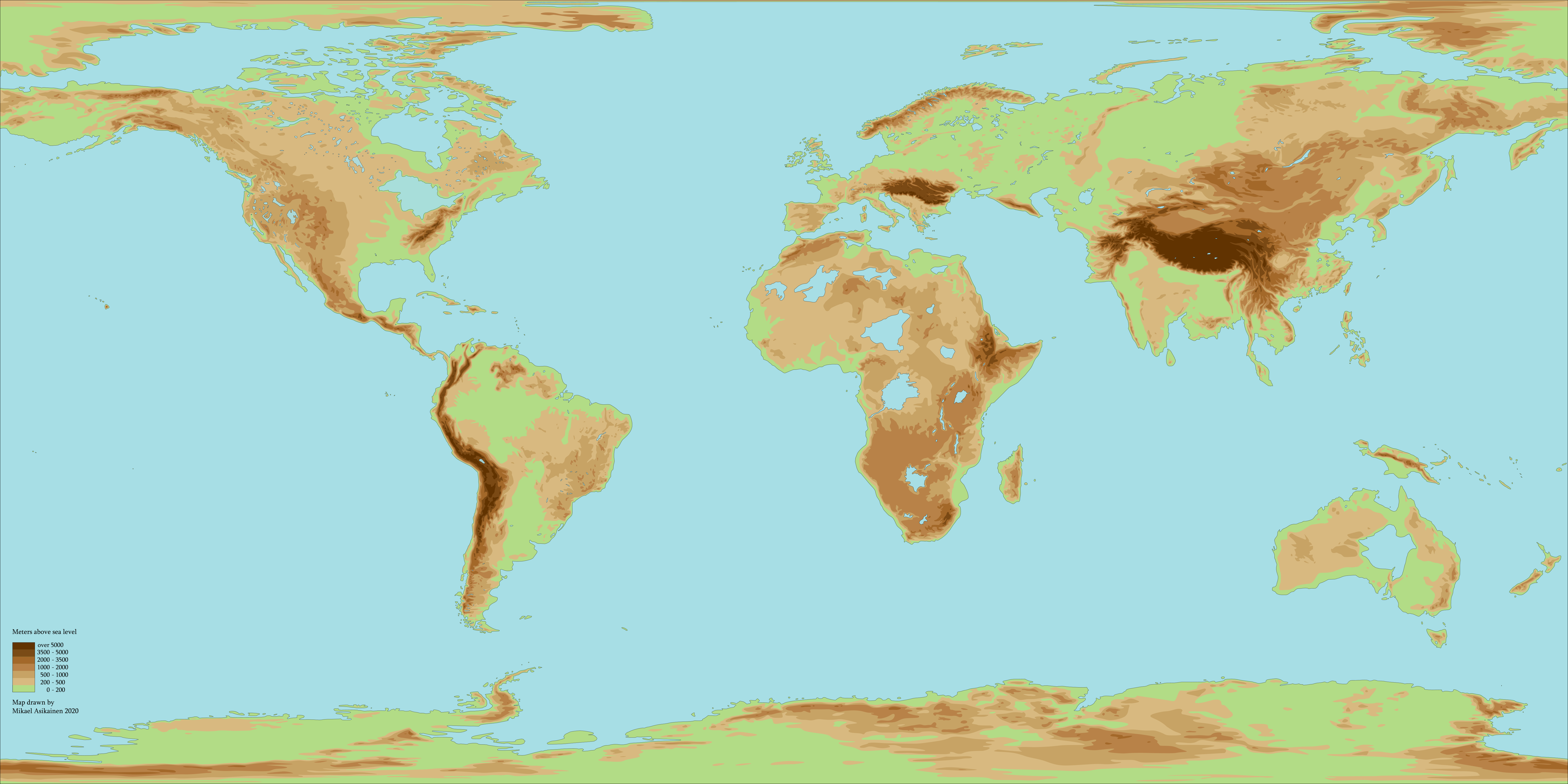 Even by looking at the shape, we can see some differences between Great Lakes Earth and Earth. For one thing, some of the same mountain ranges are shorter than back home, suggesting that uplift happened at the same time as back home but stopped earlier, whereas others are taller than back home (the Appalachians being as tall as the Alaska Range, the Andes as tall as the Himalayas and the Himalayas themselves being as tall as Mauna Kea.) The Atlantic Ocean is 500 miles wider, and the Beringian connection between North America and Asia seems more permanent than back home. Greenland has been rearranged to the extent of Mont Forel, its highest peak, being the North Geographic Pole. Sub-Himalayan Asia looks noticeably different from the distinctive dagger-shaped Indian Peninsula back home. In Eurasia, there is evidence that the Low Countries, Western Asia and the Japanese Archipelago used to exist, but they have all since sunk beneath the surface. Indonesia never existed, creating a wide-open corridor between the Indian and Pacific oceans (at least, our definitions of them.) And what we thought would be the Baltic Sea turns out to be the Baltic Plain. The mighty mountain ranges of Europe—the Alps, the Pyrenees, the Apennines, to name a few—are not as mighty as they are back home. Instead, the mightiest mountain range is the one that dominates Eastern Europe. The tallest peak stands 22,838 feet above sea level and is still rising. Right behind that range is a large, Tibet-like plateau. Finally, we have Tasmania, Australia and New Guinea so much further south that the distance between them and Antarctica is, compared to back home, cut by half.

While not all of them could be explained momentarily, we do have a basic understanding as to what the first point of departure is. It is the moment the “Himalayas” (which some of us use that name lightly) started to form, which was 56 million years ago, six million years earlier than back home.

The Paleocene-Eocene Thermal Maximum (or PETM) began sometime between 56 and 55 million years ago, same as back home, but something seemed off. 0.3 to 1.7 pentagrams of carbon dioxide (300 million to 1.7 billion metric tons) were still being released to the atmosphere every year. The global increase in temperature was still by five to eight degrees Celsius (nine to 14 degrees Fahrenheit). The difference, we have finally found, was in the duration. Whereas our PETM lasted for about 200,000 years, the PETM on Great Lakes Earth lasted three to four times that long.

The next point of departure came 36 million years ago, when the Bering Land Bridge became re-established as a stabler, permanent land bridge. We don’t know which side made the first crash—Asia or North America? Either way, it ultimately resulted in an Atlantic Ocean that is right now 500 miles wider than it is back home.

With the existence of the Tethys Sea in continuation, Africa had for the longest time been the world’s largest island. The one major exception was from 31.8 to 25.8 million years ago, when a tectonic snag clogged up Gibraltar, blocking off access between the Tethys and the Atlantic Ocean. This created a land bridge connecting Iberia to Morocco and Algeria. Plants and animals traveled to and from either side multiple times, sometimes in a cycle. But the bridge, in the grand scheme of things, did not last long. An equivalent of the Zanclean Floods knocked off the tectonic snag, de-damming Gibraltar and allowing the waters of the Atlantic to mix with the Tethys once more.

The final major point of departure happened sometime between 14.5 and 14 million years ago, a date known back home as the “Middle Miocene Disruption”, in which the climate cooled down probably because of changes in the ocean currents. On Great Lakes Earth, that date was called the “Miocene-Pleistocene Cold Snap”, in which the global temperature dropped so far down so quickly that half of all plant and animal species went extinct. There are two major culprits for this drop—a desertification of the Tibetan Plateau, which exposed the rocks to the sun, resulting in a kind of “heat brick” that results in a more intense monsoon than the one India experiences back home, and the formation of the Panamanian Twins, which blocked off access from the Pacific to the Atlantic oceans.


Climate map will come later. How much later, that will depend on the commissionee. The thread will grow as time goes on. Currently, everything's still a work-in-progress.

This is a really interesting one for sure. I remember seeing a solar system post about this? What is the solar system like here?

Cantra said:
This is a really interesting one for sure. I remember seeing a solar system post about this? What is the solar system like here?
Click to expand...

After much thought, I have decided that it is the exact same as ours.

JohnWarrenDailey said:
After much thought, I have decided that it is the exact same as ours.
Click to expand...

You should have changed it, makes it more unique.

Cantra said:
You should have changed it, makes it more unique.
Click to expand...

That would make the point of departure four and a half billion years ago, not 56 million.

JohnWarrenDailey said:
That would make the point of departure four and a half billion years ago, not 56 million.
Click to expand...

Well, the Earth has already changed that much, why not change the system too?

Because that would make the life on this world way too alien, which is not the point I'm going with this project.

JohnWarrenDailey said:
Because that would make the life on this world way too alien, which is not the point I'm going with this project.
Click to expand...

Well, the other planets don't affect the Earth's ecosystem.

Look, the only way for this alternate Earth to have no rodents, no bats, no songbirds and no perch-like fish is for the point of departure to start at 56 ma.
You must log in or register to reply here.
Top
Top