Neoteros said:
Huh, where can I find that TL?
Click to expand...

A World Avoided? Just scroll up a bit. It's not a proper timeline, it's a series of graphics detailing a world in which a small POD in the 1960s leads to the Montreal Protocol never being signed and thus the ozone hole continues to expand. There are just two so far. 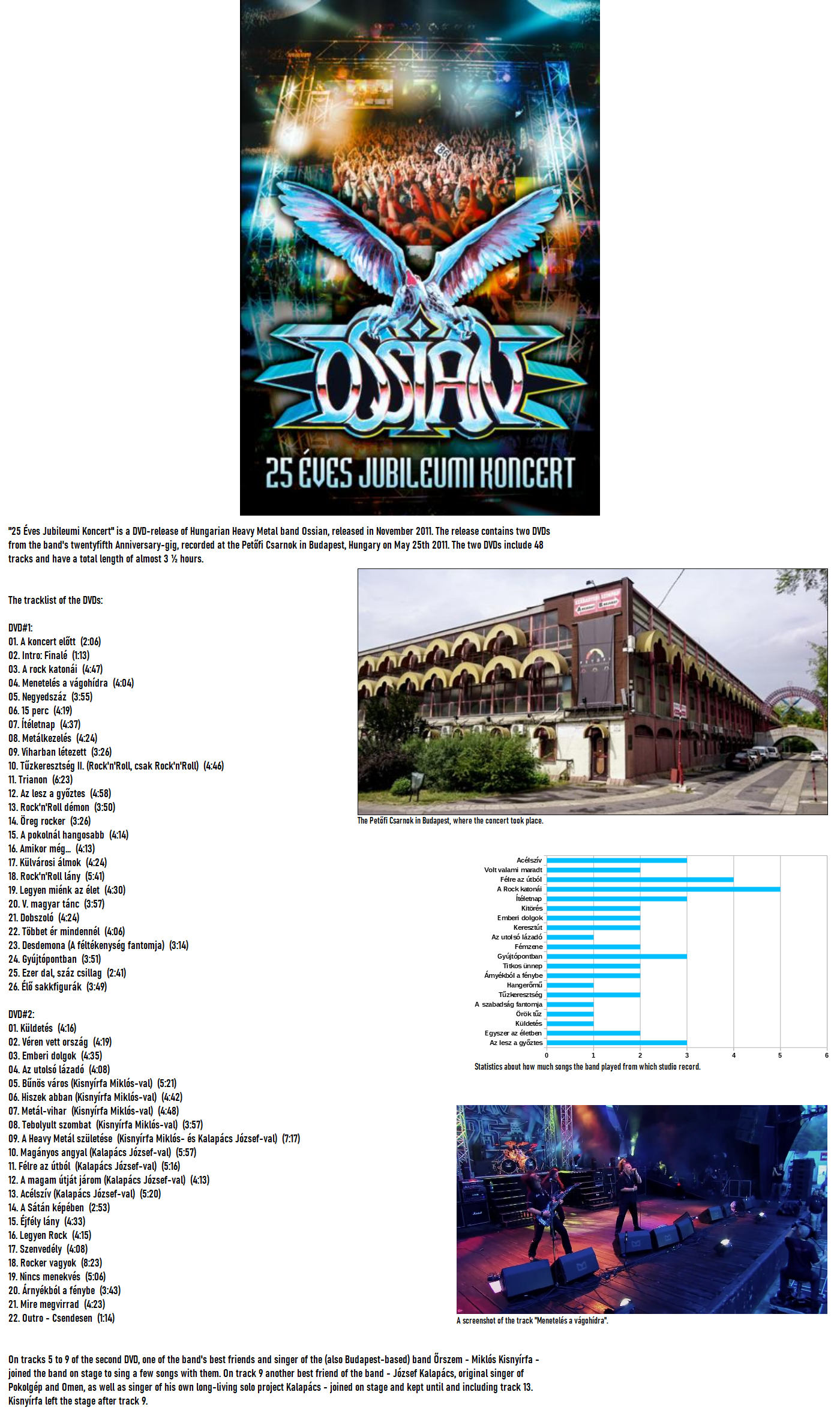 1. To all the Hungarians (and non-Hungarians too) who are familiar with Ossian... I'm a huge fan of that band since approx. 11 or 12 years. And for this TL, I changed the setlist and length of the "25 éves jubileumi koncert"-DVD and other small little things here: In this TL, the band recorded the songs "Metál-vihar", "Legyen Rock" and "Kialtás a melyből" during the same recording sessions like of the "Acélszív" album, but these three songs didn't make it on the album, so the band decided to release these on an E.P. called "Volt valami maradt" circa half a year later. Plus they kept the endings of "Rock'n'Roll lány" and "Metál nemzedék" like on the demotapes for the final album versions. "Metál-vihar" has only released on the "Volt valami maradt"-E.P. (and on the best-of, but see further below) and not later on the "A szabadság fantomja"-album.
The song "Az utolsó lázadó" has been released on the same-named recording only, not again on "Fémzene".
"Trianon" is a longer song, that's why it has a length of more than six minutes here on the DVD.
Ossian released a 2CD-best of in late 1998, entirely re-recorded (30 songs). Also they translated the whole best-of into English by Endre Paksi singing-in the songs into English.
They released the (also longer) 1998 "Koncert"-live album also on VHS and later on DVD.
Also they released a live-VHS in Febuary 1993 called "Rockerek vagyunk!". Gig on this one was the Budapest-gig on September 19th 1992.

2. This release takes places in the same TL as the Őrszem-releases (see here and here). More stuff of this TL, including not only Hungarian Metal-stuff, to come. But please be partient, it needs its time.

A VW Taos with a different face:

The sequel to an example of the TL where GM disappeared over 10 years ago. The lists of US models still available:

Not sure if to post this here or in the anime thread, but given it is pixel art and not anime, I guess it belongs here. I did a lil "portrait" I was itching to do ever since I finished this map, and I made it in the same style as the map so, here it do be: 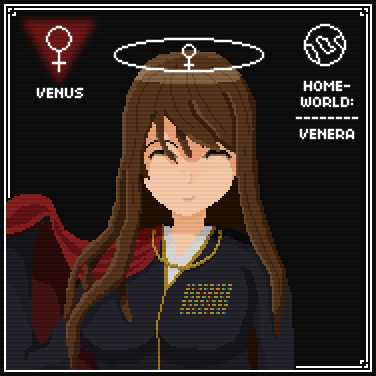 ​
I may do one of Mars also, but I do not guarantee that lel. I just stole the Stellaris "Royal1" outfit thing, with the cape. In-Universe a portrait like this would probably be available in the "Infoviewer" app, accessible only to either the aristocracy, and even then the upper echelons of it, or the royal family. Done in Photoshop for those who want to know. It can be better but heh. Enjoy

If anyone has any timelines set in modern day explaining things like an alternative Cold War or so, please do share them! I’d love to see it.

What if Nissan brings Samsung Motors in America as a subsidiary? 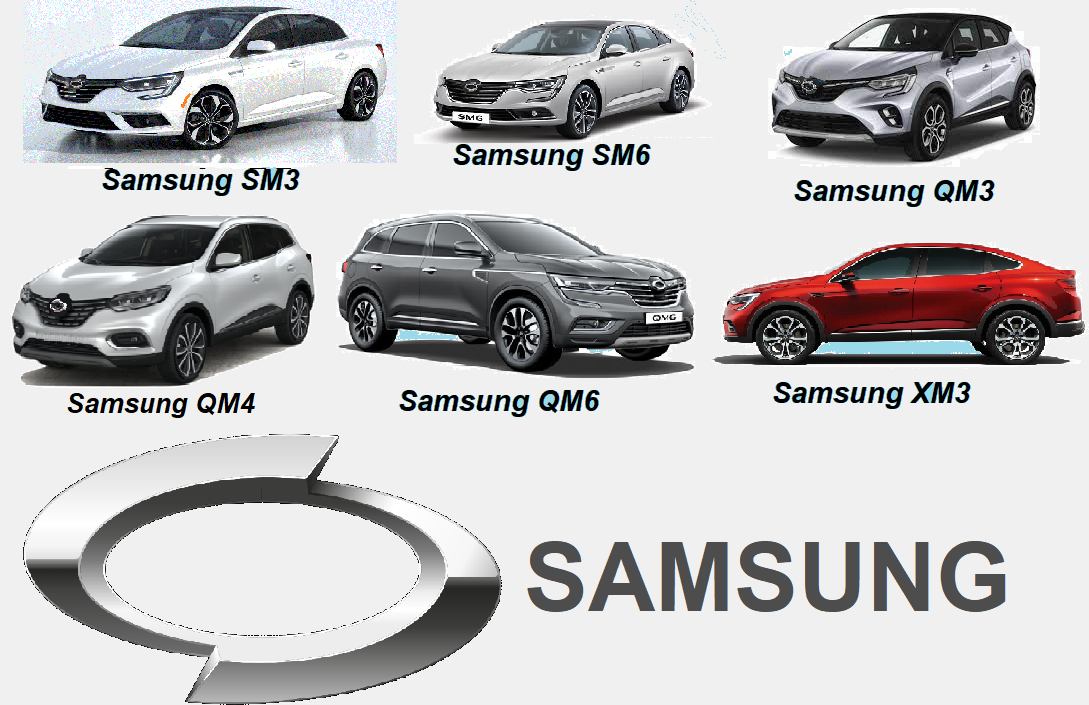 Aztekk said:
It actually hits the Capitol. Post-attack legislation is much more severe, leading to a War on Terror times ten and a Middle Eastern disaster
Click to expand...

Ah, ok, just that the description of the single flight changing the world made me think it was bigger than that.

​
​
Donno how much of a graphic this is, but I made a script! Meant for writing Auld French, or other languages in it. I started with Proto-Sinaitic (top row), which I edited a bit (2nd row) and then "standardized" it so all letters can be both easely recognizable and fit the same shape, thus making it easy to write. Original idea was to make something more... Arab-looking, given I love that aesthetic, but that will come later on probably.

A few things you should notice/know

1. C and K have been merged. They make the same sound in all languages but English, so no need for 2 different letters. For example, depending on how you pronounce Caesar (I do with a soft C), you'd spell it either as Kezar or Sezar.
2. U and W got merged. Don't think I need to explain why.
3. I and Y got merged. Bis.
4. Q got deleted. It existed in V1 and V2, but by V3 I decided it is unneeded, given its sound can be done by K. I may need to add some separate "variants" of K to work for softer C situations which English lacks but, at least Romanian, has.

In the end, I ended up re-inventing the wheel, or in this case, the Greek Alphabet. B and D look familiar, so I gotta do something about that. I also hate how M looks, so in future versions I may make it more recognizable, or at the very least, simpler.

It looks like a decent, and fairly plausible IMO, alternate Greek alphabet.

Merging those letters makes a lot of sense.

The use of <Q> has fluctuated back and forth over time - Greek used it for a time, but it fell out of use due to sound changes, and Latin <Q> used it before rounded vowels, and later only for /kw/.

Did Angevine undergo a similar range of sound changes to OTL French?

Merging those letters makes a lot of sense.

The use of <Q> has fluctuated back and forth over time - Greek used it for a time, but it fell out of use due to sound changes, and Latin <Q> used it before rounded vowels, and later only for /kw/.

Did Angevine undergo a similar range of sound changes to OTL French?
Click to expand...

Well, Auld French was meant to be a conlang (I said I'll do this summer but alas I did not). Basically it was meant to be French but with Latin pronounciation/Old French words. Think of Romanian without the Slavic words. It probably would undergo some changes (given the language, depending on your prefered canon, has existed for over 500 years.) but idk

soviet_killer said:
They make the same sound in all languages but English, so no need for 2 different letters. For example, depending on how you pronounce Caesar (I do with a soft C), you'd spell it either as Kezar or Sezar.
Click to expand...

2. Kaizer would be the most accurate.

2. Kaizer would be the most accurate.
Click to expand...

Eh, at least in Romanian its pronounced as Kezar, sorta more like Chesar as in Che Guavera.

Here's a rare snippet of American Television Network's teletext pages from 9th February 1991, just before the beginning of the Third Southern War in the US!
Many thanks to Andy from Nebraska at teletexthistory.lj.su, who extracted the data from an old VHS tape. 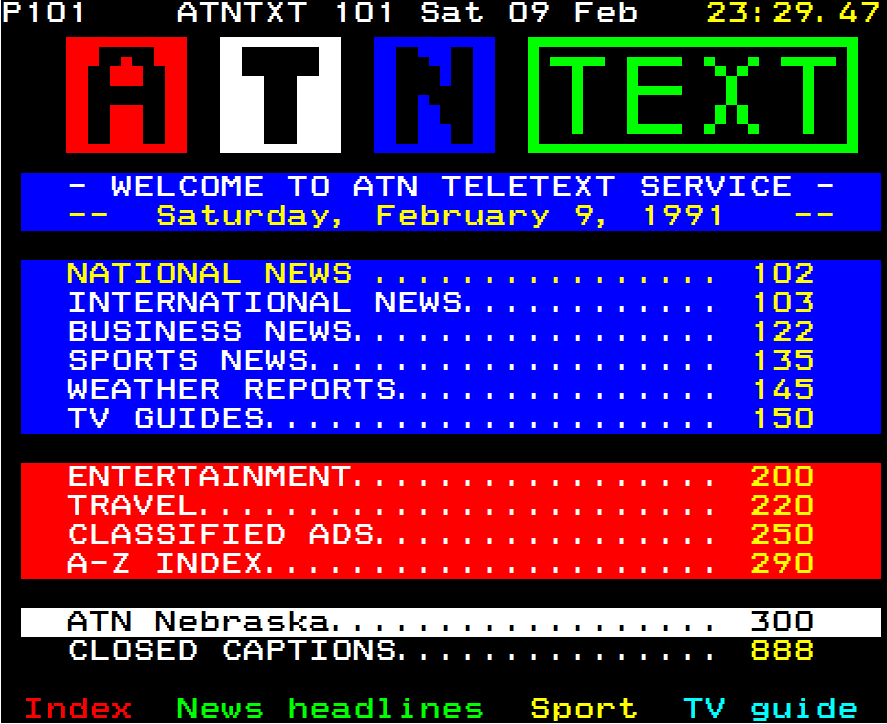 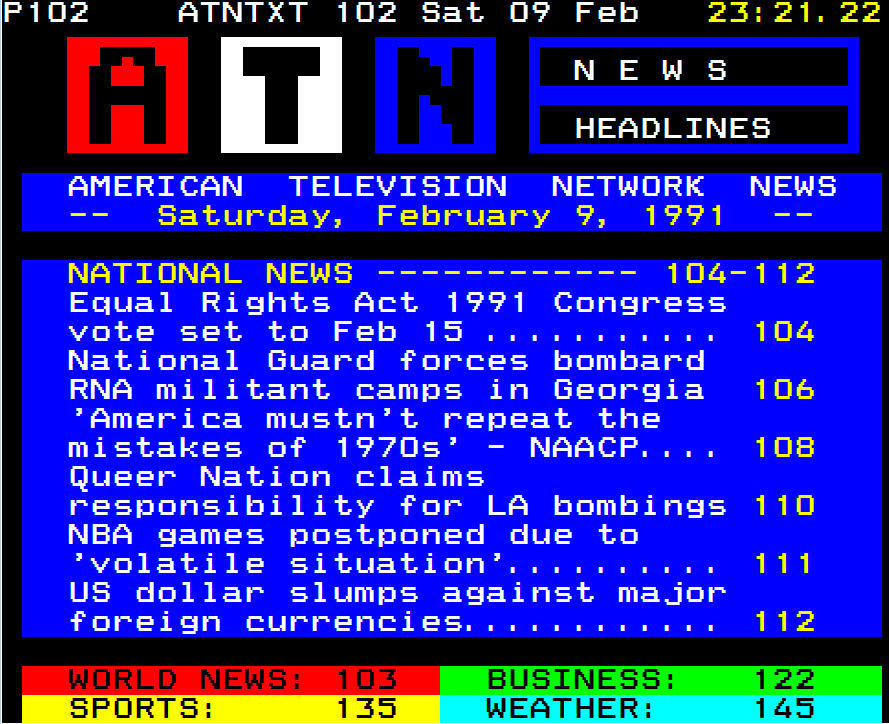 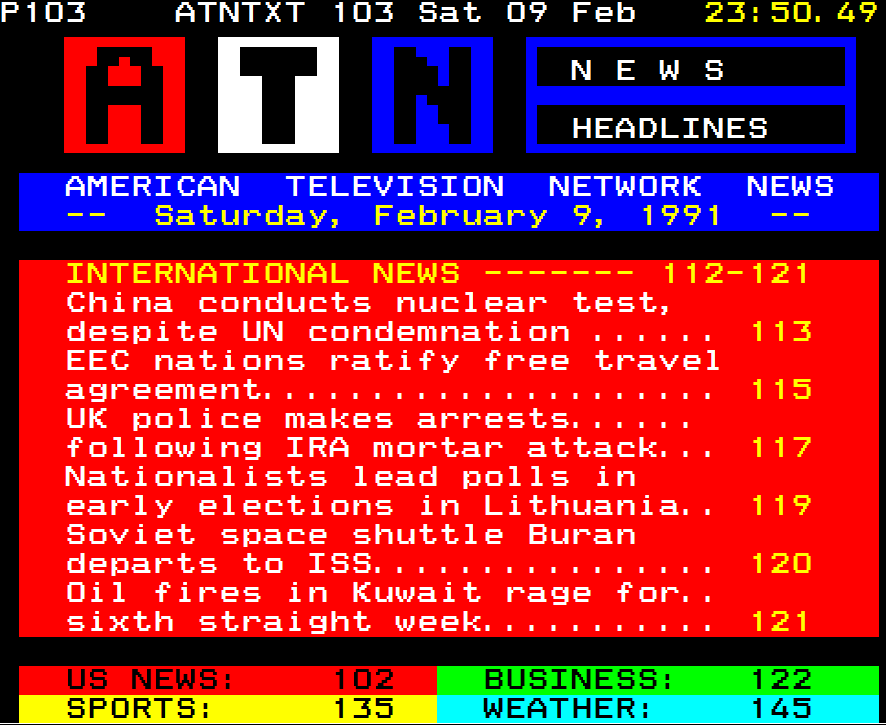 (Me dicking around in the wxTED teletext page editor, which can be found here)
Last edited: Sep 16, 2021

The Vampire and Dhampir Society is a register charity and American vampire rights organization based in Bloodyland and led by vampire, lord jairus in 1946.​

Guardian GI said:
Here's a rare snippet of American Television Network's teletext pages from 9th February 1991, just before the beginning of the Third Southern War in the US!
Many thanks to Andy from Nebraska at teletexthistory.lj.su, who extracted the data from an old VHS tape.

Guardian GI said:
Here's a rare snippet of American Television Network's teletext pages from 9th February 1991, just before the beginning of the Third Southern War in the US!
Many thanks to Andy from Nebraska at teletexthistory.lj.su, who extracted the data from an old VHS tape.

Interesting! I want to know more about the lore of this graphic!


Interesting! I want to know more about the lore of this graphic!
Click to expand...

Sorry for the double text. Stupid connection on my phone messed it up. 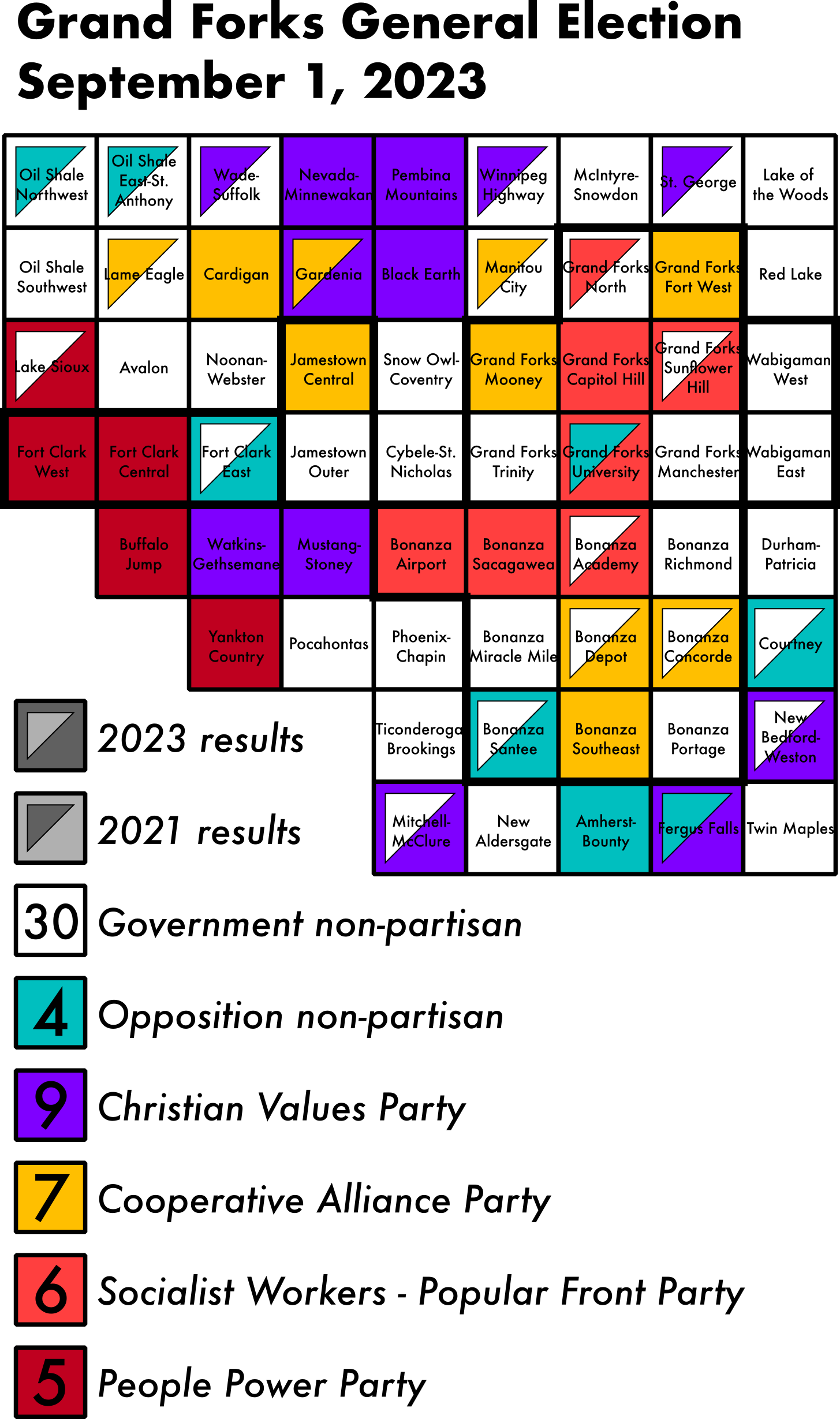 The defining question of the last decade of Grand Forks politics has been - should Grand Forks join Vesperia, or should it remain within the United States system, whether as an associated state or incorporated into the Constitution? Before 2023, however, this question was hardly reflected within the election returns; members of the State Assembly were elected or not chiefly due to local factors like religion, ethnicity, and unionization.

The turning point came in December 2021, when Speaker Jeffrey Parker (Gov't-Grand Forks Manchester) sent the first official delegation to Montréal to discuss the legal process of joining confederation. This was followed by Resolution 22A, in which the Assembly resolved to appoint a commission to begin the process of officially joining Vesperia; soon after, the date was officially set for January 1, 2025.

This forced a response from the opposition. Christian Values, the political wing of the Apostolic movement, opposed unification because it would require Grand Forks to repeal laws declaring Christianity the state faith, as well as end capital punishment and criminal penalties for sodomy; the Cooperatives and Socialist Workers opposed the fact that unification would likely undermine the state system of price controls and subsidies on wheat and fuel, as well as state ownership of banking, rail, and the post; and People Power opposed the likely end of Sioux legal autonomy and border rights. All four parties, as well as several independents who opposed the government for other reasons, came out against unification, or at least against the ongoing unification process.

The 2023 election returned a one-seat minority for the government. But while Parker announced his resignation, his successor Lyell Robertson (Gov't-Avalon) is likely to be able to negotiate a compromise, likely including a referendum on confederation and a postponement of the official date to 2026 or 2027. For one thing, the Government made substantial gains, especially in the rural north, complicating the narrative that Grand Forkers rejected the notion of confederation wholesale; for another, many urban opposition MPs, particularly in the Socialist Workers - Popular Front Party, could likely be convinced that a liberalized criminal code and more protections for cultural minorities are worth a slightly less generous welfare state, especially if the exceptions to trade union restrictions negotiated for oilfield workers can be extended to more categories of worker...

This is absolutely brilliant! You perfectly captured the formatting and writing styles of both publications. If I didn't pay close attention to the content, I would think the second image was a real NYT frontpage. I also like the subtle differences in format to alt-CNN.