Banned
I had greatly enjoyed the previous Jour J album, "L'imagination au pouvoir?" and was looking forward to reading the new one, "Vive l'Empereur!" I just have, and now it's review time. 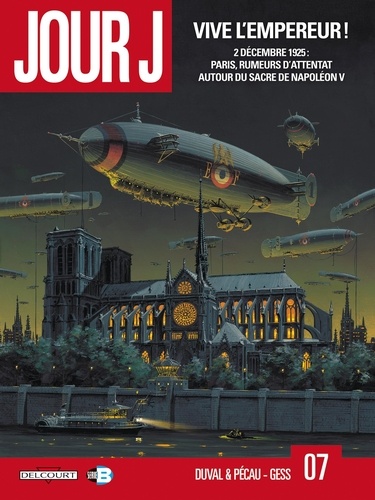 Perhaps we should have a variant of the Mohs scale of SF hardness for AH. At the hard end of the scale, the well-researched, plausible stuff; at the soft end, the stuff in which the author is basically playing around. "Vive l'Empereur!" is, on such a scale, much softer than "L'imagination au pouvoir?" as it plays fast and loose with the rules of AH.

The POD is in 1802: a different Treaty of Amiens results in lasting peace between France and Britain. The French Empire secures its position in continental Europe and, over the following decades, expands through annexations and vassalizations until its frontiers reach all the way into central Asia. Meanwhile Britain successfully reclaims its wayward American colonies and consolidates its maritime hegemony.

The story takes place in 1925: the young Napoleon V is about to be crowned, but Paris is awash with rumors of a plot to assassinate him and the foreign rulers, such as the British king and the Russian tsar, who have been invited for the event. In TTL the year 1925 is very different from ours: French scientists have long focused on electrical technology and the result is a "batterypunk" setting, complete with Tesla coils--Tesla himself is around, and works for the French--and all manner of implausible technology (and airships--gotta have airships). France has banned Christianity, and its military has instead embraced a revamped version of Mithraism, while Mameluks are being used as a secret police.

It gets even softer: no matter that the POD was in the early 19th century, by 1925 all the historical figures you can think of are around. There's an Austrian hitman named Adolf Hitler and a Russian Okhrana director named Iosif Dzhugashvili, not to mention an exotic danser named Mata Hari and a young Enrico Fermi working on nuclear physics.

It's enjoyable as far as it goes, in a Peshawar Lancers sort of way, but if anyone tried to pull off such a scenario on this board, his thread would be moved to ASB without a second thought. In fact the authors have made a critical research failure at one point: a map of TTL's Europe displays identical borders to OTL in the present day despite having a huge mention of French Empire over it. I made a mental facepalm when I saw that one.

All in all I much preferred the previous story. Now let's see how the next one will be--the cover art displays UN armored vehicles in the ruined streets of a French city.

Where can you get this series?

Color-Copycat said:
Where can you get this series?
Click to expand...

this page mention a few places:

Damn it... I've been waiting for this "Jour J" episode to come out but I'm not convinced by the summary...

The "batterypunk" part might be fun, but i don't like some of the butterflies... Particularly the banning of Christiannity: it never was on Napoleon's mind OTL. Even if he had troubles with Pope Pius VII, I don't think Napoleon would have gone as far as to ban Christiannity.

Anyway, that's just a first impression based on the summary. I'll make my own judgement when I'll read the comic once I find it.

Can you get English versions of it? As otherwise if I can get a copy it will just be my and my Oxford Hatchette French Dictionary translating every verb that I know how to conjugate but not what it's meaning is!

The Wandering Poet said:
Can you get English versions of it? As otherwise if I can get a copy it will just be my and my Oxford Hatchette French Dictionary translating every verb that I know how to conjugate but not what it's meaning is!
Click to expand...

Not that I'm aware of, but I think it's fairly easy to second-guess what's going on even if you don't understand every last word.

BTW I ordered mine via Amazon.fr, it's probably the most convenient way to get hold of it short of going to a Fnac.

Banned
I'm going to sell the book, if anyone's interested.

Not up to my admittedly exacting standards. Those who like their AH soft rather than hard will probably enjoy it, though.

It's in excellent condition, BTW. Only read once, and I'm neurotically delicate with books.

Hendryk said:
Not up to my admittedly exacting standards. Those who like their AH soft rather than hard will probably enjoy it, though.

It's in excellent condition, BTW. Only read once, and I'm neurotically delicate with books.
Click to expand...

Going a bit off tangent hendryk but have you read "la Brigade Chimérique" ? If yes, any good ?

Speaking of scale of hardness for alternate history, TV tropes does sort it into five types based on plausibility. There are even some timelines from the board shown.

Marc Pasquin said:
Going a bit off tangent hendryk but have you read "la Brigade Chimérique" ? If yes, any good ?
Click to expand...

Er, no, I haven't.
You must log in or register to reply here.
Top
Top