On 461, Avit(Avitus) would escape from Rome to Northern Gaul in the court of Aegidius(Gil), later on Syagrius(Siagri) would marry a granddaughter of Avit named Severiana, a daughter of Saint Sidoni(Sidonius) and Gil and Siagri would secure their hold of Northern Gaul with the help of Brythonic mercenaries.

On the deposition of Romulus Augustus in 476, it was certain that the only Western Roman state surviving is the one ruled by Siagri, Siagri would secure Alvernha and Avaricum from the hands of the Visigoths with the help of his brother-in-law Apollinaris of Alvernha and he would declare his state as the successor of the Western Roman Empire aside from that of Nepos.

Siagri would reconquer the Kingdom of Burgundy in 486 from Godigisel with Siagri integrating the Burgundian realms to himself and forced Godigisel’s daughters and nieces as concubines of his mercenaries and men and the GalloRoman regime had reclaimed Lion, he would give the border lands in Brittany and the Border lands with the Visigoths to his Brythonic mercenaries.
Last edited: Apr 30, 2021
Reconquest of Belgica

On 490, the leader of the Franks Clovis would be defeated by a coalition of Chararic and the troops of Syagrius, the successor of Gil of the Romans in Gallia, causing the Franks to lose an effective leader against the Gallo Romans and the later battles with the Gallo-Romans.

On 490, Siagri, his troops and his Alan and Briton mercenaries would start the plan of reconquest of Southern Gaul, he would set his eyes on Burgundy as it has the lands of Lyons, the Administrative center of Roman Gaul.

The Frankish Kingdom went to Chararic after the death of Clovis and the Franks were forced into the east of Rhine as negotiated between Chararic and Siagri.

The Franks that remained in Gallia Belgica were made as Foederati which includes the ancestors of the Belgian Dynasty [1]which followed the house of Aegidius.

The Gallo Romans would annex the lands west of Rhine of the Alamans after they defeated the Franks on 491.

Siagri would send his own men to Theodoric about the new regime and Siagri was so impressed of Theodoric on how he killed Odoacer and he would be allied with the Ostrogoths in the future and that would help in regaining Aquitania and Narbonensis and it would split the Ostrogoths away from the Visigoths.
Last edited: Monday at 1:45 PM
Reconquest of Aquitaine and Gallia Narbonensis

On 500, Due to Siagri’s earlier victories against the Burgundians, Siagri would start a war against the Visigoths, the Gallo Roman population of Aquitaine and Narbonensis supported Siagri over Visigoths under Alaric II, Siagri would win against Alaric and kill him in action in the battle of Voulle.

Siagri would only have the support of the Gallo Roman population of Aquitaine and Narbonensis and for that reason he would be able to regain them, however, majorly of Vasconia populated by Basques, the area west and south of Gironde would remain under Visigothic rule (with the exception of the area around Bordeus) briefly but Vasconia would gain independence on 503 after the Visigoths lost the rest of Aquitaine and Narbonensis.

He would move his capital from Novidon(Novidonum) to Bordeus(Bordigala) after the reclaimation of Aquitaine and Narbonensis.
Last edited: Monday at 5:33 PM
Siagri’s chronicles

The bards and chroniclers in the court of Siagri I of the Gallo Romans would describe the barbarians in the Germania like the Franks and Iberia like the Astures as barbarians, however Gallo Roman would have both Angles and Alans in their domains and have the Angles and Alans settled in the fringes of the Gallo Roman state which meant the continuation of the partial Germanization of those areas, The would now be called as the Western Roman Empire, Roman Kingdom or Reialme Roman by its people or the Second Gallic Empire by the people outside of but its center is now in Lion or Lugdumum(in classical latin) which would be called, previous centers of administration was in Novidon and minorly in Lutecia/Paris.

On 512, Siagri I would die and replaced by his son named Gil II, a descendant of Gil I and Saint Sidoni, who only had daughters.
The future Gil II would have his daughter, Honora betrothed and later married to Teodor of Metz, the founder of the Belgian Dynasty.
Last edited: Wednesday at 9:59 AM
The Fate of the Saxons and Britons

The Latin speaking people of Armorica area would freely trade with the Britons of Brittany and Britons of Britain, both the Latin speakers fleeing Eastern Britain being settled by the Saxons and traders of Armorica would latinize the Brythonic speaking Western Britain making the Romano Britons who fled maintain their own language and propagate both the Latin Armorican and Romano Briton language and culture to the Brythonic speakers and it would cause the Brythonic migrants to Brittany to Latinize as well due to the Briton migrants being more latinate and the Brythonic people of Armorica would later end up being completely assimilated by the Gallo Romans of Armorica in the 7th century.
Last edited: Apr 23, 2021
Subjugation of the remaining Romano-Britons

On 512, on the death of Siagri, Gil II would campaign to make the surviving Romano-British states in the north of the Channel and the Brythonic Armorican states as tributaries to him so that they would have an ally against the Saxons and it would work as the Culture the Surviving Romano-British states and the Brythonic Armorican states would change to something similar to the culture of the Gallo Romans.

The making of the Romano-British states as tributaries of the Gallo Roman state would work in favor of the Romano Britons in the End but that would not stop the advance of the Saxons against the Romano-Britons and Celts but it would cause to seal the Romanization and Latinization of the remaining Celts in Greater Britain.
Last edited: Apr 30, 2021
Western Europe after Gallo Roman reconquests 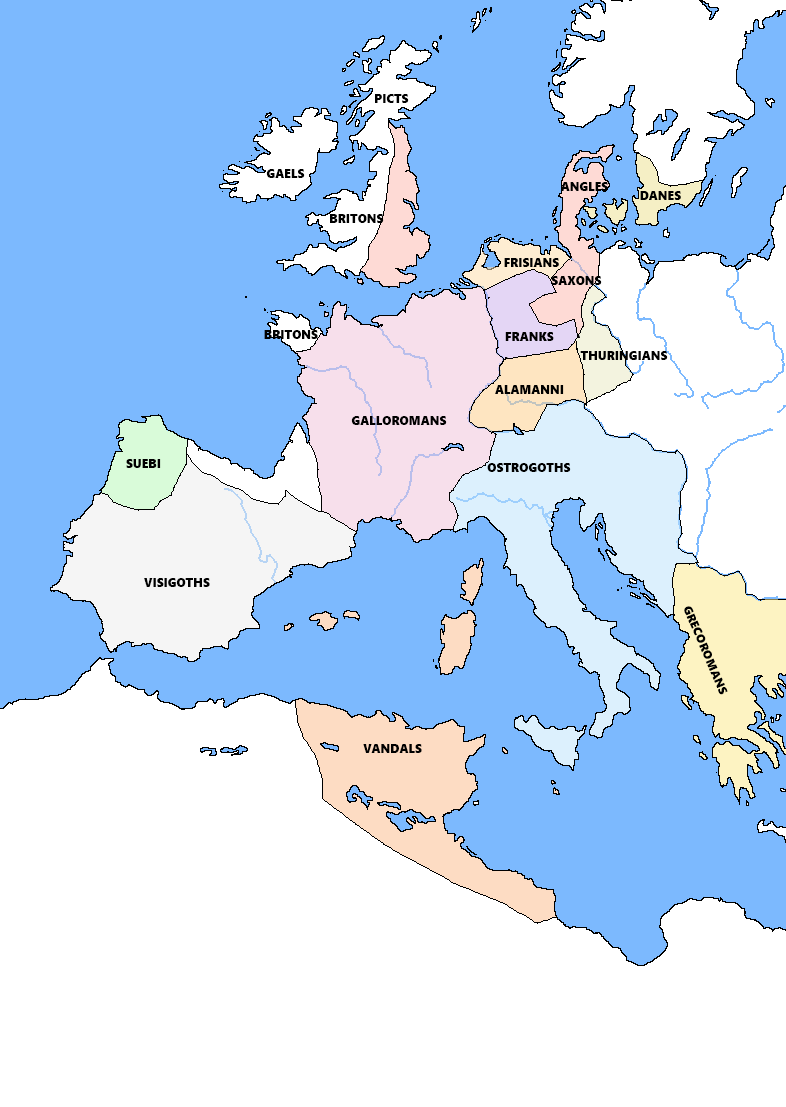 I decided to change the Capital of the Gallo Romans from Lyons to Bordeaux(Bordigala).
Gil II and Justinian I New

On 520, after, Gil II subjugated the Britons, he would subjugate the Vascones up to the Pyrenees finally reuniting Gaul in GalloRoman indigenous rule on the end of the 520s, however on the 530’s Gil II would see the reconquests of North Africa by Belisarius and Justinian I who seemed to have more enthusiasm about the reconquests of Italy.

The two Roman Empires would basically casually be at okay at each other but compared to the Gallo Roman reconquests, the Gallo Romans are happy under the rule of the Gallo Romans which would be an issue in the future when the difficulties with the Sassanids and later Muslims arrived. 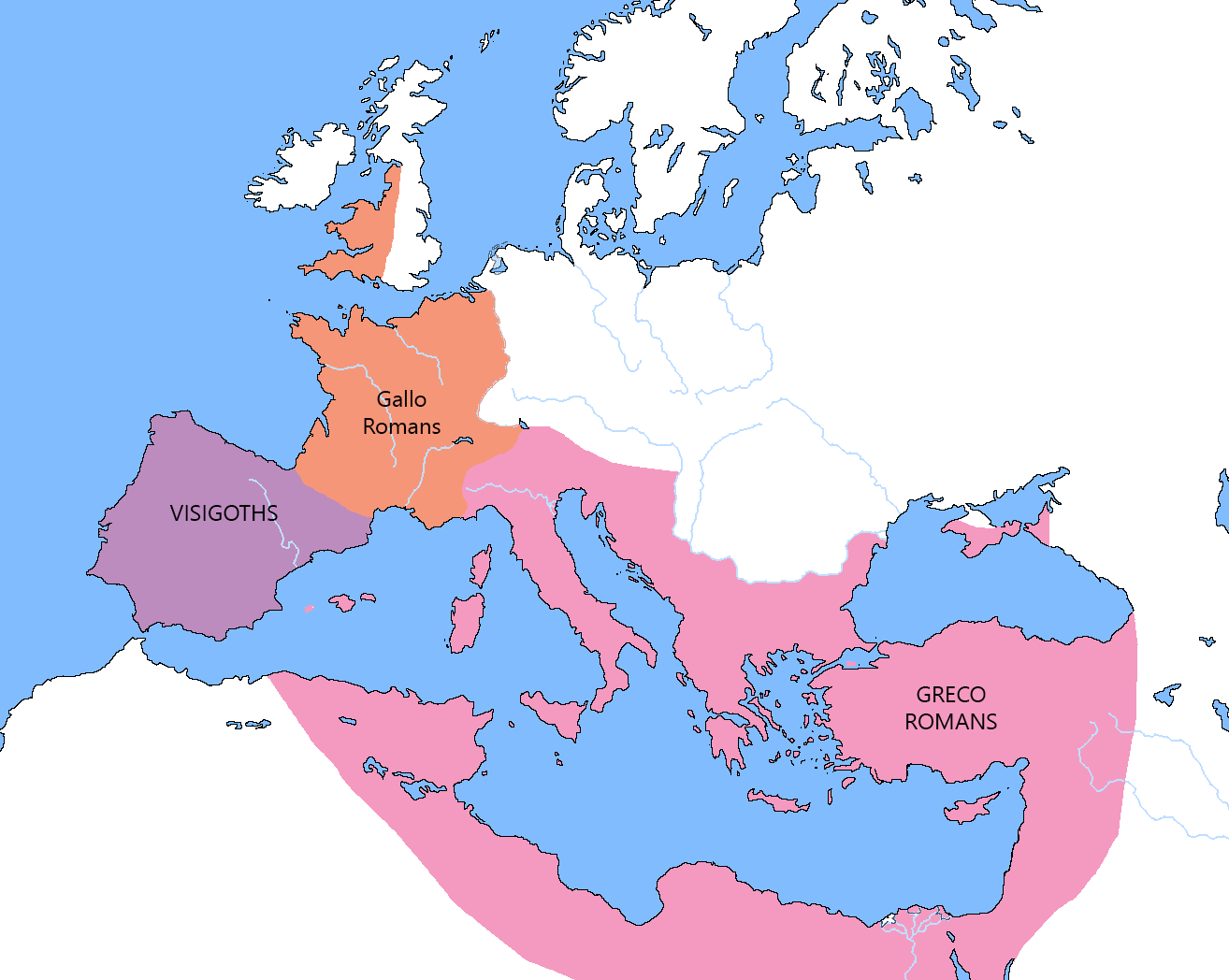 On 536, Empress Honora(Aenor) would ascend the crown with her husband, Teodor of Metz, the founder of the Belgian dynasty, after the death of Gil II, their BritoRoman vassals would not recognize them as the ruler of the new Western Roman Empire, Teodor of Metz would pacify their BritoRoman vassals, on 540, Belisarius and Justinian would negotiate the transfer of their conquests in Italy, North Africa, and Iberia.

Empress Honora would pay the price for the transfer of the transfer of the territories which were paid by One hundred crowns as well as the marriage of her eldest daughter, Diana to Justinian’s relatives in the Eastern Roman Empire.
Last edited: Today at 1:04 PM
Threadmarks
Reader mode
You must log in or register to reply here.
Top
Share:
Share
Top