Banned
Post maps of what you think the world will be like in the future! (our earth )

Seemed like as good a place to begin as any.

This is Earth in the year 2211. After the, ahem, 'accidental' First Contact in 2020, the UN was reformed into a quasi-functional government that handles off-world and 'xenoforeign' affairs. It's the Earth of Ad Astra 4, which is run on the Frontier here: http://www.the-frontier.com/phpBB2/

Some of you are already familiar with it-I've recognized some names, notably Arch-Angel. (His Stilor and humanity, shall we say, don't get along.)

Anyway. There is one error on the map. Jamaica is shown as part of the US whilst Puerto Rico is independent and colored as aligned to the British Commonwealth. That should be reversed.

Nations that share a common color but maintain internal borders are surpanational confederations, similar to the EU in the 80s or early 90s. Nations sharing a similar color theme are within the same voting bloc in the United Nations General Assembly.

There are a number of large off-Earth (and extra-solar) colonies that're also voting members in the GA, but only a relative handful have populations over 100 million. 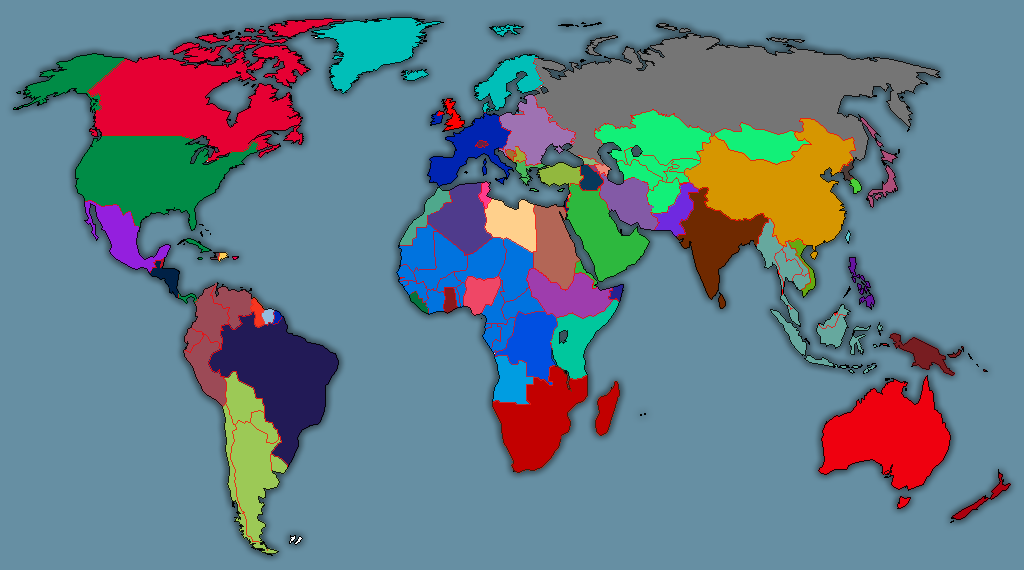 Here's one I've had since I got here. Never had the nerve to post it. 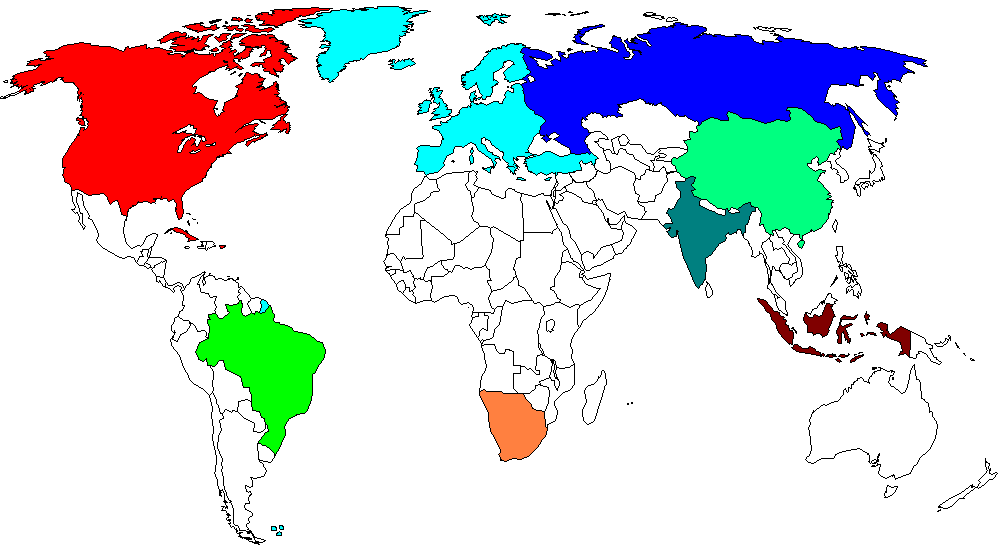 Earth, 6315. Showing the provinces, or Gaue of Terra, the capitol planet of the CGU. The capitol city of the Central Galactic Union is Munich, located in the District of Bavaria, in the Province of Germania.

From my CGU-verse, where the galaxy is ruled by a pan-human nationalist and human supremacist civil-dictatorship. Benevolent to humans, but fiercely racist to xenomorphic species, many of whom have their populations "recalibrated".
I'm sure 6315 counts as "in the future".

Slacker, since when did you show up here?

Been lurking for years, finally figured I'd register.

Donor
I did a couple a while back. Not really what I think the world WILL be like (because I think it's 1. impossible to predict that far ahead and 2. will probably be much more boring border-change wise ) but more interesting maps based on current trends (e.g. superpower China etc.)

Here's the first one

Donor
Here's the second one, main difference being a resurgent Russia and an America that breaks up (as all the pundits seem to act like it's on the verge of doing at any point )

Donor
Close up of North America for the last one (not all the Mexican states are labelled because they're too fiddly). 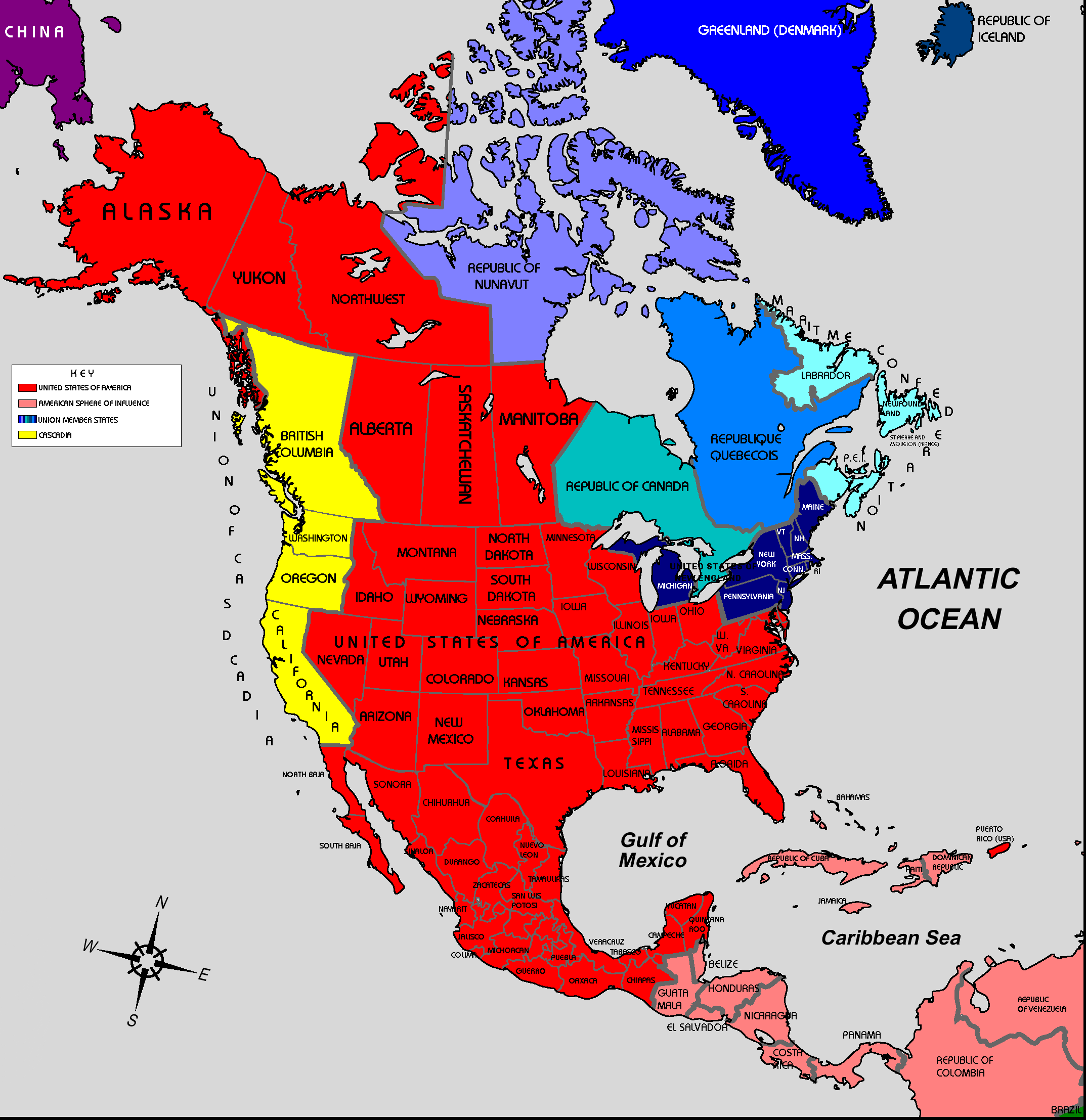 Interresting maps, but I think Libya and Tunisia will become EU-members before Egypt, if EU ever let in some of the none-secular countries. Especially Libya because it got oil and is low populated. If it weren't for the dictatorship I imagine the country would be let in before Turkey.

At-Bari said:
Interresting maps, but I think Libya and Tunisia will become EU-members before Egypt, if EU ever let in some of the none-secular countries. Especially Libya because it got oil and is low populated. If it weren't for the dictatorship I imagine the country would be let in before Turkey.
Click to expand...


It can't enter as it has no European territory.

TheGrandVizier said:
It can't enter as it has no European territory.
Click to expand...

I think this restriction will be lifted in the near future - consider that North Africa has always been closer to European cultural and political sphere than to African, even since the days of the Phoenicians.

Donor
Greenland used to be in the EU and that's certainly not by any possible geographic definition in Europe. (As some Americans are fond of saying, before Greenland pulled out, technically the EU had more territory in North America than in Europe ).

In any case, in the second of my future maps, they've dropped the 'European'. I don't know what they'd call it so I just left it as 'the Union'.

midgardmetal said:
I think this restriction will be lifted in the near future - consider that North Africa has always been closer to European cultural and political sphere than to African, even since the days of the Phoenicians.
Click to expand...


True, I think some sort of cooperation between North Africa and EU economically speaking is inevitable. It would benefit both anyway.

not sure what year this takes place.
Brown: Republic of China
Orange:United Indiastan (I always hate calling it that, but its the only one that I can think of.)
Green:the United States of Earth
lightgreen:USE occupied territories after the Middle East war.
Pink: Isreal
Purple: European Confederation
Yellow:United States of Latin America
Dark Bluish: Pacific Union (actually a puppet government run by USE)

trading with Europe is not very appealing to USE, and USLA is very angry with USE, same with EC. There was an "accidental" detonation of a 50mg atomic bomb on the San Andreas during a presidential election when a democrat was the favorite to win. 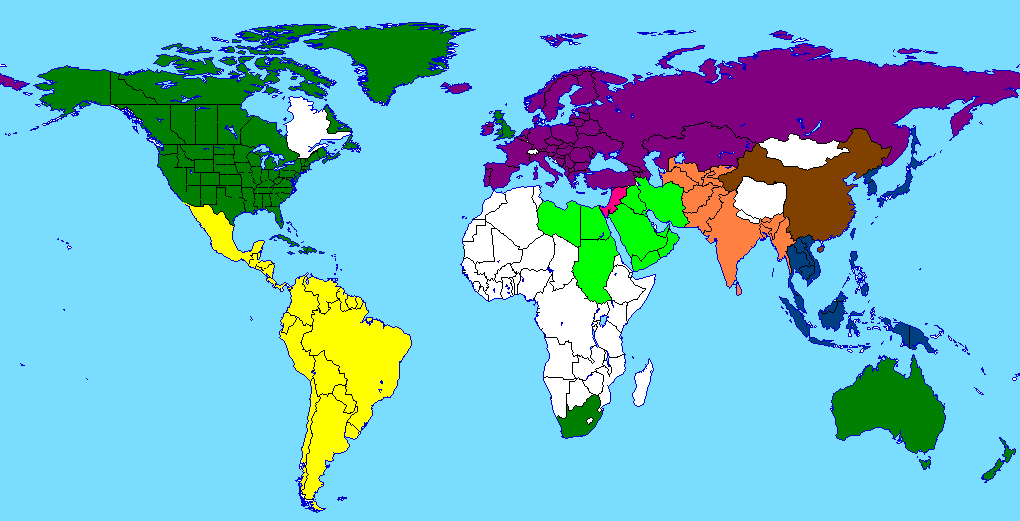 What happened the Baja California?

Banned
Baja California got owned with a nuke...on the San Anreas faultline

The World if AH.com owned it

I like all of these maps. Most futuristic maps are interesting.

I don't see political maps like these having a place in the too distant future. Any changes that will happen between now and then...Well probally something in Africa but not much else major
You must log in or register to reply here.
Top
Share:
Share
Top