For Want of a Hammer

The transition between the late Roman and the post-Roman west was not a simple process. First came the Migration period, the Völkerwanderung, when Germanic peoples swept through the Western Roman Empire. Then the Empire ceased to exist, dissolved by Odoacer. Odoacer was in turn dethroned by the Ostrogoths, who were conquered by the Eastern Roman Empire, which was mostly driven out of the Italian peninsula by the Lombards. The old faiths were replaced by or absorbed into Christianity, and the numerous heresies were rooted out. Now a new faith, hailing from the deserts in the east, was preached from the Atlantic Ocean to India, uniting one of the largest empires the world has ever seen.

The Mediterranean had long been defined by a single empire, existing in a mono-polar state where the only real challenges were from within. But with the fall of Rome, the status quo was lost, never to return. Now was a time of warring empires, a time of feuding faiths, a time of great men and greater mistakes. It was in this multi-polar sea of kingdoms and empires that Abd al-Rahman ibn Abd Allah al-Ghafiqi set out from Al-Andalus.

Abd al-Rahman al-Ghafiqi would soon come to clash with the Majordomo of Francia, Charles Martel, in the woody hills near Tours. It was an unusually warm day in early October, and though the Franks were outnumbered, they held the defensive line and fought valiantly. The battle seemed to favor neither side for quite a while, until a cavalry charge broke through the Frankish lines. Acting faster than the Franks could react, Martel was cut down by Arab swords. The hero of Francia met his end on the hills of Tours. Soon after, the disoriented Frankish army was routed. Al-Ghafiqi however, had also suffered heavy casualties and feared a counterattack by a reorganized Frankish army. Using the victory to extort the city of Tours for treasure, Al-Ghafiqi returned to Al-Andalus. The battle was chronicled by Frankish, Aquitanian and Arab sources- and while all of them seemed to recognize the importance of Martel's death, none could predict the history shattering consequences that the Majordomo's demise would have.

Good to see this back!

We getting maps? Your use of CKII maps was genius.

What drove this sudden remix?

We getting maps? Your use of CKII maps was genius.

We will be getting maps.

Honestly, I just felt like it. Making the old TL was fun, but looking back there are a few things I could have definitely handled better (the fact that borders changed drastically every other year got to be a bit too much for one thing). I also have a bit more free time now (though that's going to change again in about a month).

I was just rereading the old story a few days ago, great to see it making a come back!

Nice take, wonder to see what will unfold and how different will be of @Talus I of Dixie TL

Talus I of Dixie

Nivek said:
Nice take, wonder to see what will unfold and how different will be of @Talus I of Dixie TL
Click to expand...

Nivek said:
Nice take, wonder to see what will unfold and how different will be of @Talus I of Dixie TL
Click to expand...

I think mine will focus more on Europe, at least at the start.

Talus I of Dixie

ArchimedesCircle said:
I think mine will focus more on Europe, at least at the start.
Click to expand...

Well, i'm interested in your TL, i will be watching

haider najib said:
Whats this about?
Click to expand...

No Charlemagne and the consequences thereof.

"The empire, long divided, must unite; long united, must divide. Thus it has ever been."
- Luo Guanzhong, Romance of the Three Kingdoms

The death of Charles Martel had immediate consequences. Under Martel, the Frankish kingdom had been bound together and made into the regional hegemon. While Martel lived and reigned, Francia was ruled the west. But such leadership can be a double-edged sword. Martel's leadership was in many ways the foundation of Frankish power. And with the foundation gone, the house of Martel slid into disarray.

Familial squabbling was the first issue to arise. Carloman and Pepin, Martel's adult sons, had been groomed to replace their father as majordomo, with each serving as majordomo for a section of the kingdom. All well and good, as far as the two brothers were concerned. However, Grifo, Martel's son by his second wife, was also intended to be included in this division. Carloman and Pepin, angered by this, attempted to have their six year old sibling imprisoned. Grifo's mother, Swanahild, pre-empted her stepsons' actions and fled with her son soon after news of Martel's death reached her. She spirited Grifo away to Bavaria where her father Duke Odilo offered safety and support for Grifo's claim. At the same time, Martel's brother Childebrand, duke of Burgundy, was reluctant to allow his nephews to lord over him.

The tributaries Martel had wrangled into submission proved to be an even greater issue for the Franks. Bavaria, under Odilo, was the first to attempt to throw off the Frankish yoke, entering a war to both expel the Franks and to install a controllable majordomo at the head of Francia. Bavaria was the first to rise up against Francia, but it was not the last, for Martel had earned the kingdom no shortage of enemies. Odo the Great, ruler of Aquitaine and survivor of the Battle of Tours, held little love for the fallen Martel and none whatsoever for Martel's sons. In his prime, Odo had been a powerful, respected and independent ruler, a position he desired to hold once more. In the east, Theudebald of Alamannia rode against the Pepinids in the name of his brother Lantfrid, who had been slain by Martel two years prior. The Alamannians had repeatedly attempted to expel the Franks and rule their land in their own right, and to the rebellious Theudebald the situation seemed a blessing. Another matter of concern was the situation in the duchy of Provence. Provence's leadership was in flux at the time of Martel's demise- split between the patricians Abbo (the pro-Pepinid candidate) and Maurontius (who desired independence).

Even more worrying were the pagans in the east. The Frisians and Saxons were recent additions to the Frankish fold, and neither had been truly pacified. Despite the efforts of Frankish missionaries, the Frisians held fast to their pagan ways. Even worse was Saxony, where outside of handful of settlements on the border the Franks held no control.

Finally, Carloman and Pepin had to contend with their own subjects. The Frankish nobility had long been skeptical of the growing power of the Pepinid dynasty within the Merovingian kingdom to the point that the Pepinids, not the Merovingians, held power. Some nobles were truly incensed that the king had been reduced to little more than a puppet. Others, however, had grown jealous of the power Martel's family wielded and desired to take the position for themselves. While the noble revolts were numerous, the greatest one occurred in Anjou. This was the demesne of Ragenfrid, the last non-Pepinid to hold the title of majordomo- a title stripped of him by Martel in 718. The aging Ragenfrid had experience both in ruling and in fighting Pepinids- experience that drew nearby nobility to his cause. By the end of 733 the north-western corner of Francia had expelled the Pepinid forces and Ragenfrid was beginning to eye Chelles, where the Merovingian king Theodoric IV was held by Carloman and Pepin- for his own good, of course. 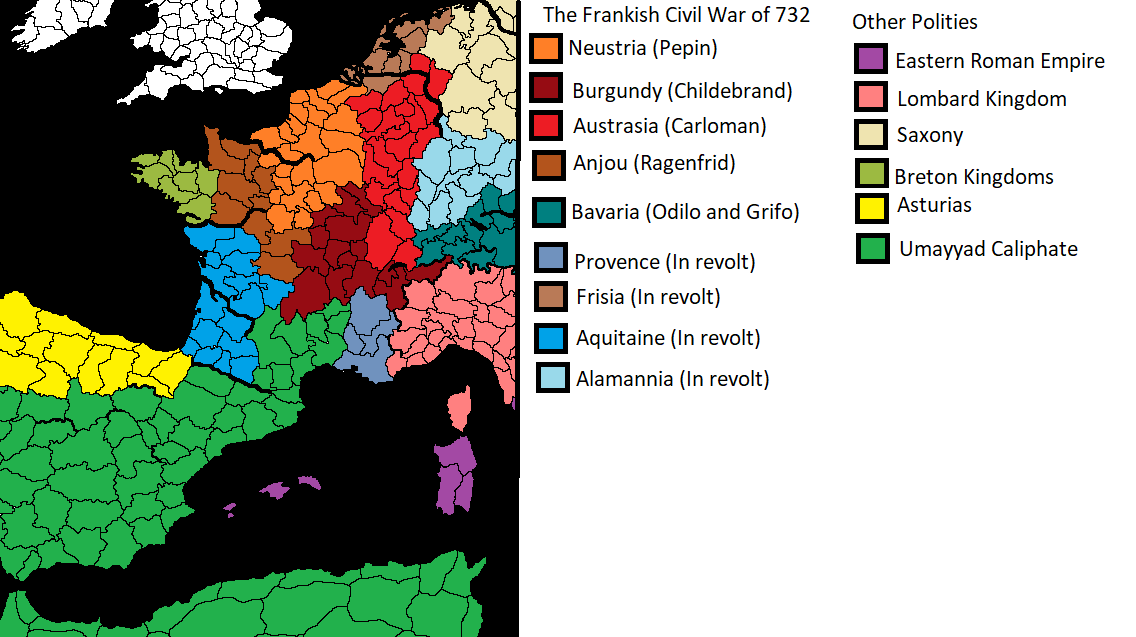 Francia and its neighbors in the summer of 733

In the summer of 733 the Frankish kingdom was in chaos, faced by revolts throughout the empire. Though cunning, Carloman and Pepin were young and inexperienced. Their father's many enemies were out for vengeance and the relatives they should have been able to trust had been driven away. Martel's death had created a power vacuum and the nature of diplomacy was displaying its abhorrence. Nevertheless, the situation was soon to grow even more complex. As summer turned to fall, the coffers of Al-Andalus began to dry, and Abd al-Rahman al-Ghafiqi would soon turn his gaze west once again.

two brothers... in a kingdom. And then a Saxon raid hit. And they ran as fast as they could. From Alamannians. And then the Frisians came. And that's when things got knocked into the 8th century...


Sorry, I couldn't resist. Anyway, if you read my first version of this TL you probably have already noticed quite a few changes. One of the big things I was unhappy with was how the Frankish Civil War was kind of skimmed over and really just kind of used as an excuse for why Francia was in shambles for the rest of the TL without really justifying it. I wanted the war to actually make sense, and I also wanted to include more historical figures rather than creating Dagobert son of Ragenfrid from pretty much thin air. Thus, Ragenfrid managed to survive a few years longer than he did IOTL where he died in 731. Additionally, the stuff with Grifo, Childebrand and Theudebald was really interesting and I was kicking myself for not using it in the first go-round. It also means that people who read my first TL aren't going to be able to predict everything, since there are and are going to be a lot of changes.

In other news, I leave to teach English as a second language in China this week, so wish me luck! But don't worry, I'll try to find time to keep this updated, though getting out more than one chapter a month might be a bit of a reach.

ArchimedesCircle said:
As summer turned to fall, the coffers of Al-Andalus began to dry, and Abd al-Rahman al-Ghafiqi would soon turn his gaze west once again.
Click to expand...

The best thing was the civil war, Andalus can now created a defense vector in the pyrennes and organize their southern france conquest very well..


ArchimedesCircle said:
In other news, I leave to teach English as a second language in China this week, so wish me luck! But don't worry, I'll try to find time to keep this updated, though getting out more than one chapter a month might be a bit of a reach.
Click to expand...

Good Luck with your new job buddy(how the pay is good, i've hear horror stories from other people out there) good luck and bon voyage buddy

Early france is even more divides than OTL and it's less than a century before the Vikings show up. Fun times.
Threadmarks
You must log in or register to reply here.
Top
Top