S. Marlowski said:
View attachment 679810
The Naval Ensign of the Confederate States Navy from 1935 to 1944, which was flown on various Confederate Warships during the Second Great War.
Click to expand...

Wouldn't bloodstained rather than Stainless be a better/more realistic option (ie with the red stripe on the fly)?

Gokbay said:
Wouldn't bloodstained rather than Stainless be a better/more realistic option (ie with the red stripe on the fly)?
Click to expand...

Who doesn't love the Confederate States of Surrender?

The flag of the Crown of Portugal, later the Grand Kingdom of Lusitania (Grã-Reyno da Luzitania) 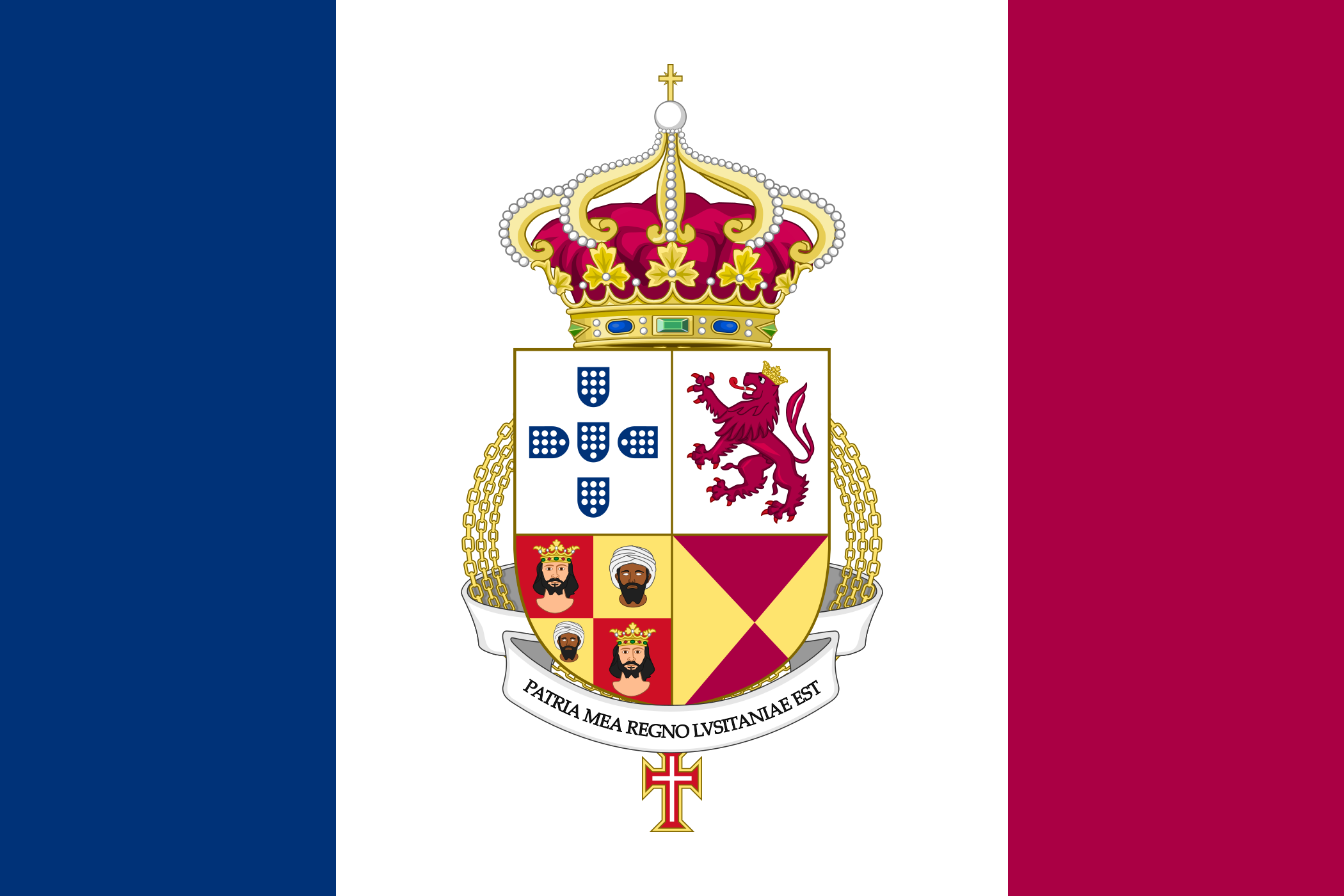 The ribbon says "PATRIA MEA REGNO LVSITANIAE EST" or "MY FATHERLAND IS THE KINGDOM OF LUSITANIA".

>"Anarchism calls for the abolition of the state, which it holds to be undesirable, unnecessary, and harmful."

Don't ancoms also insist they want to abolish the stare?

Given that anarcho-communism is a specific form of anarchism, yeah? All anarchist ideologies, by definition, advocate for the abolition of the state.

S. Marlowski said:
View attachment 679810
The Naval Ensign of the Confederate States Navy from 1935 to 1944, which was flown on various Confederate Warships during the Second Great War.
Click to expand...

@S. Marlowski dude 9 times out of ten I love what you do. But I can't see a 191 CSN using a flag that they hated otl in a universe where the stainless banner was never adopted.

All forms of anarchism do.

The problem is that Fascism is, per Mussolini himself, all about the state.

Gokbay said:
All forms of anarchism do.

The problem is that Fascism is, per Mussolini himself, all about the state.

One is a contradiction, other is just normal.
Click to expand...

Well since they call themselves 'anarchists,' obviously they mean something different than Mussolini when they speak of "Anarcho-Fascism." Really what they should say is "National Anarchism." GumSL said:
The flag of the Crown of Portugal, later the Grand Kingdom of Lusitania (Grã-Reyno da Luzitania)

View attachment 680145The ribbon says "PATRIA MEA REGNO LVSITANIAE EST" or "MY FATHERLAND IS THE KINGDOM OF LUSITANIA".
Click to expand...

Where are the two bottom coat of arms from?

KanadeCanada said:
Where are the two bottom coat of arms from?
Click to expand...

Bottom Left is Kingdom of the Algarves. 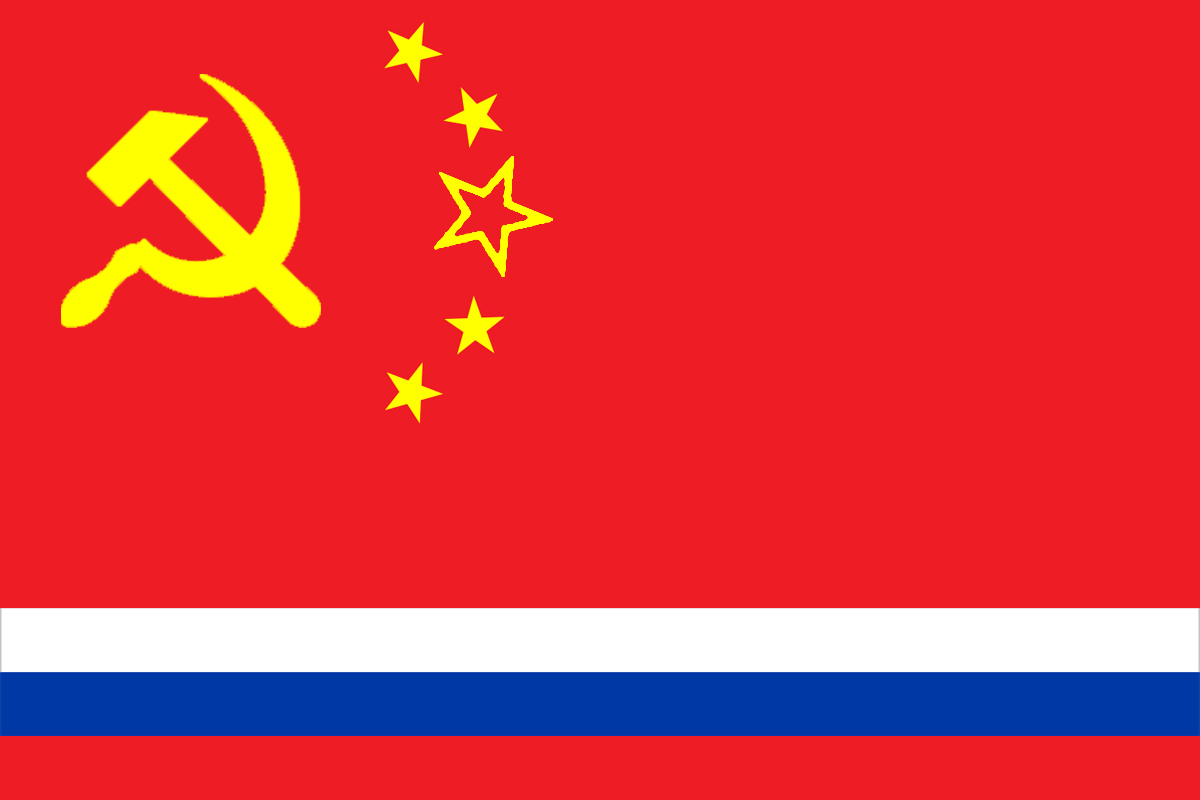 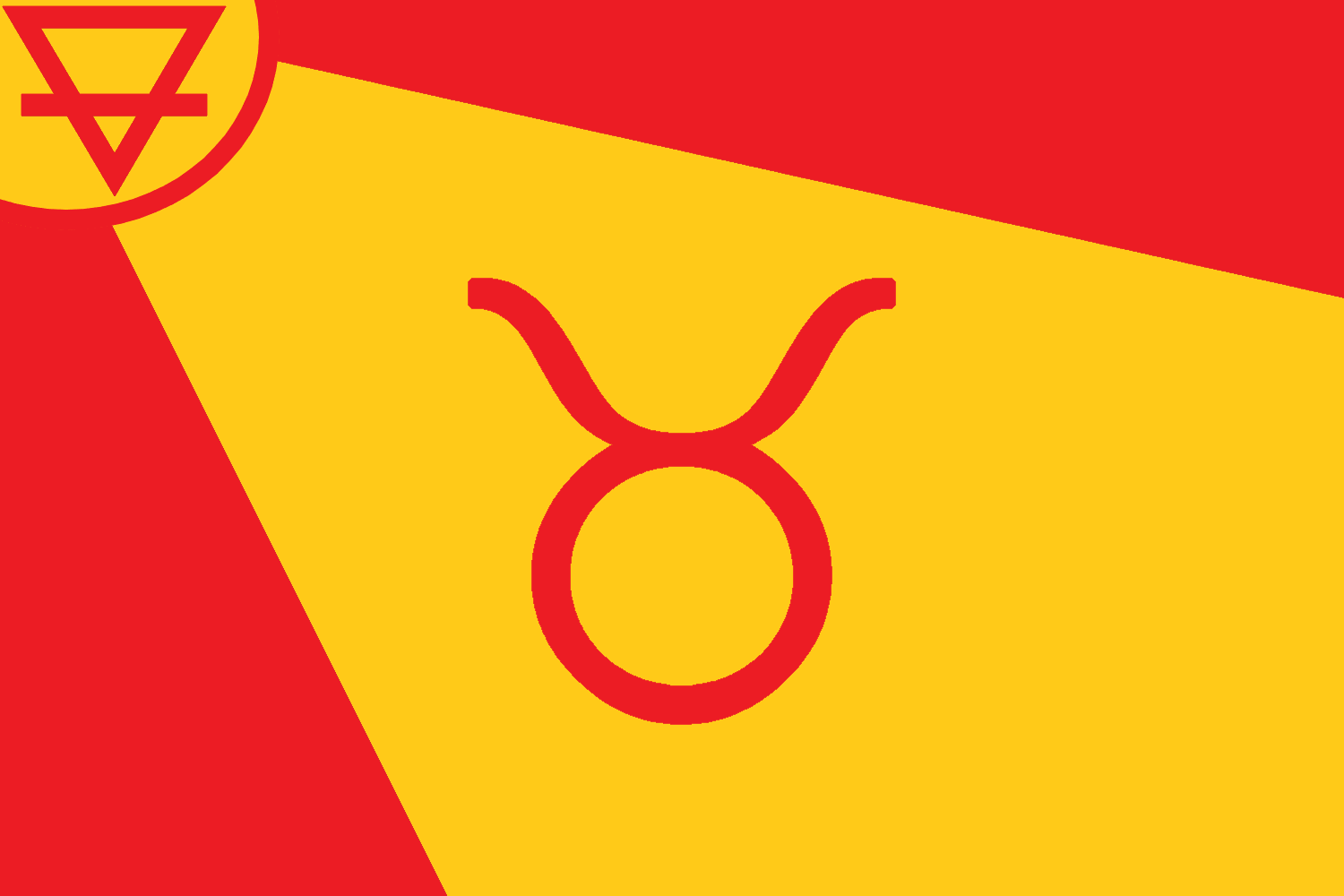 Here's something I made for a surviving Rome idea I had where instead of falling outright the Western Empire just enters a cycle switching back and forth between an empire and a republic that goes on to the modern day. The flag of the Mithraic Identity movement is commonly used by conservatives and militarists in the Fifth Roman Republic as a symbol of ethnocultural identity and opposition to the Nazarene-Spartacist consensus endorsed by the ruling Populares faction of the Senate. In this scenario Mithraism was able to survive among the elite classes and the military, eventually absorbing Sol Invictus outright and becoming the central focus of the Roman religious landcape during its recurring imperial ages, ironically serving as a mirror image to the *Christianity that comes to dominate the Eastern Empire. The symbology is pretty straightforward, with an alchemic earth symbol to represent Mithras's miraculous birth, a sun to represent the solar focus of his purview and a bull symbol to represent the central sacrifice of the religion.

Nothing to Lose but Our Chains! 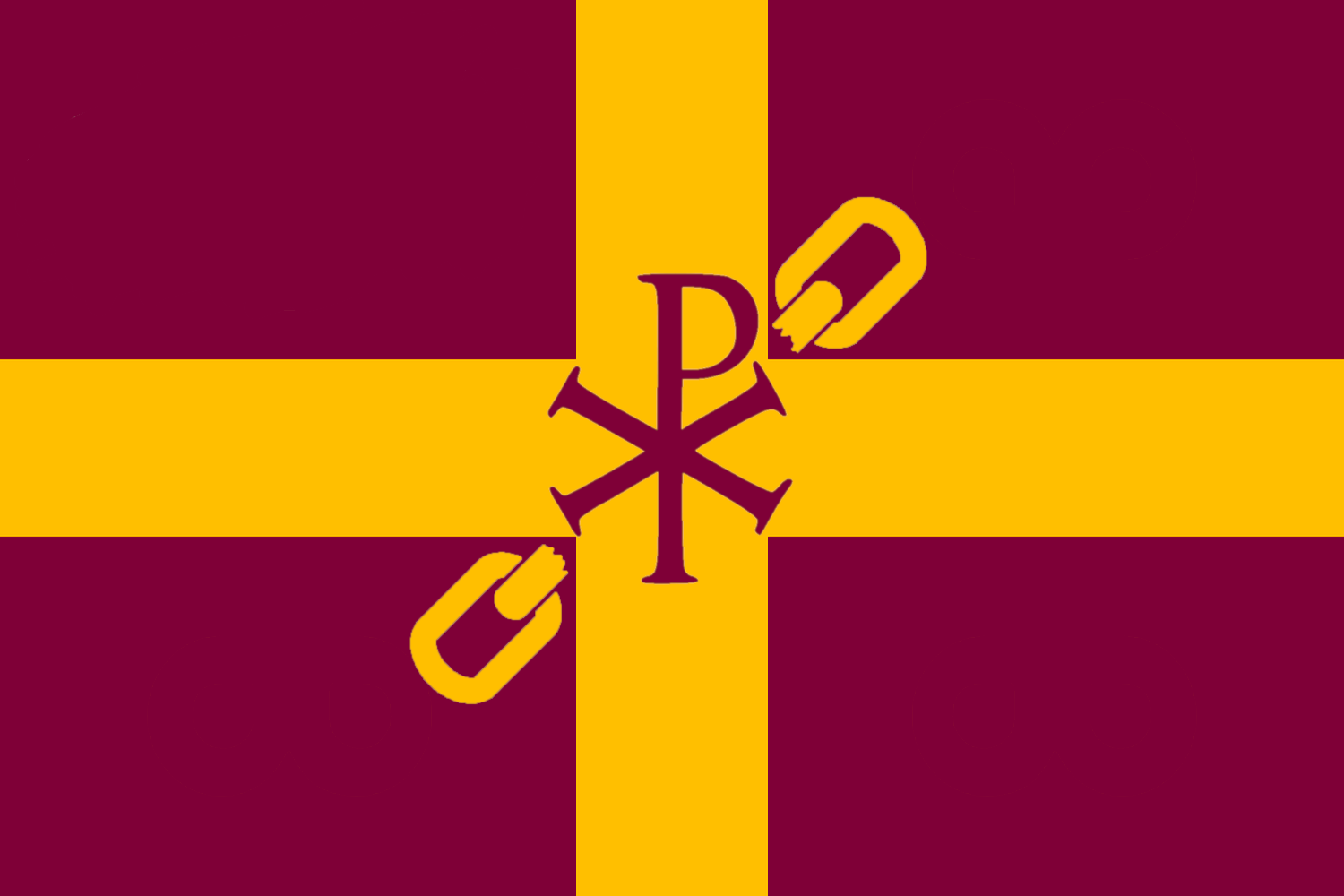 Here's a quick sequel, representing Nazarene-Spartacism. More common in the Eastern Empire*, the hybrid religious/political movement focuses on a combination of the Nazarene's religious teachings combined with a republican and abolitionist strain of populism that makes it wildly popular with the lower classes in the West. While Mithraism is usually heavily enforced during the Roman Imperial Ages, the inevitable return to a republic has traditionally seen the movement swell to seize control of the organs of state, which usually lasts until the military and conservative families are able to wrest control again and reconstitute the Empire.

*By this point Byzantium is basically monarcho-socialist, with an imperial family always coming down on the side of the masses against the nobility and largely insulated from serious calls to create a true republic in return.

Born in the USSA said:
Nothing to Lose but Our Chains!
Click to expand...

The Way of Former Heaven 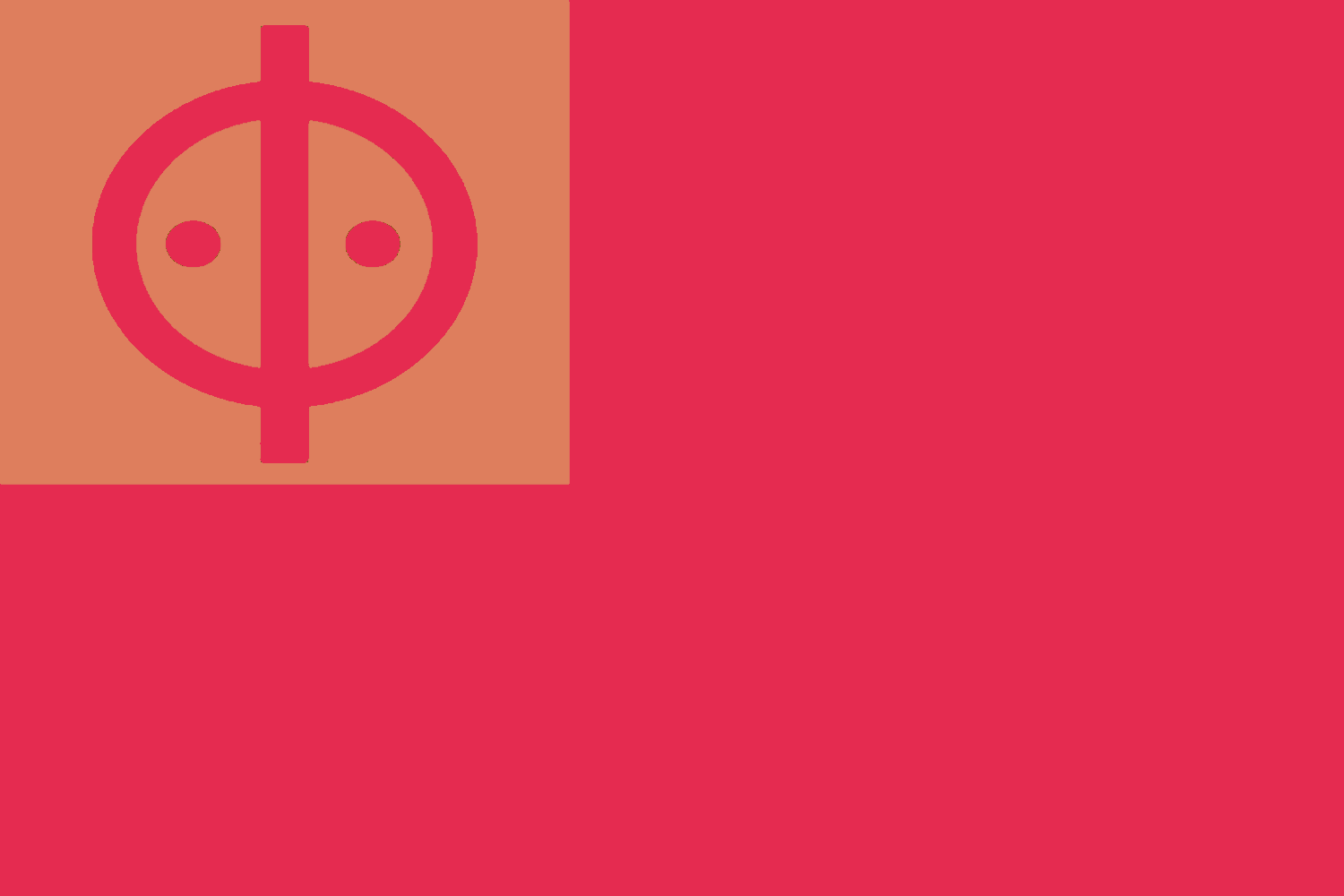 Okay last one I promise I thought to myself if Rome and Byzantium are both sticking around and have managed to retain their hegemony more or less for all this time, what other ethnoreligious weirdness would have enough popular support to play a major political role on the world stage and I came up with this. Similar to EBR's Separated at Birth a Xiantiandao offshoot takes power in China in a populist revolt, though it happens much earlier and is far less incompetent than the one used in that timeline. So, here's a flag for the Xian Regency, an empire where a republican ethos introduced by more sustained contact with Rome and Byzantium has really taken hold and created a scenario where the Chinese Senate* channels the mother goddess when selecting each new regent in something oddly close to how a papal conclave works OTL. The flag uses amaranth and peach, since both represent the concept of immortality and a literal goddess is the official head of state. I also used the Yiguandao symbol, since it's the most recognizable symbol of the Xiantiandao offshoots.

Born in the USSA said:
The Way of Former Heaven
Click to expand...

A Concert of the Faithful 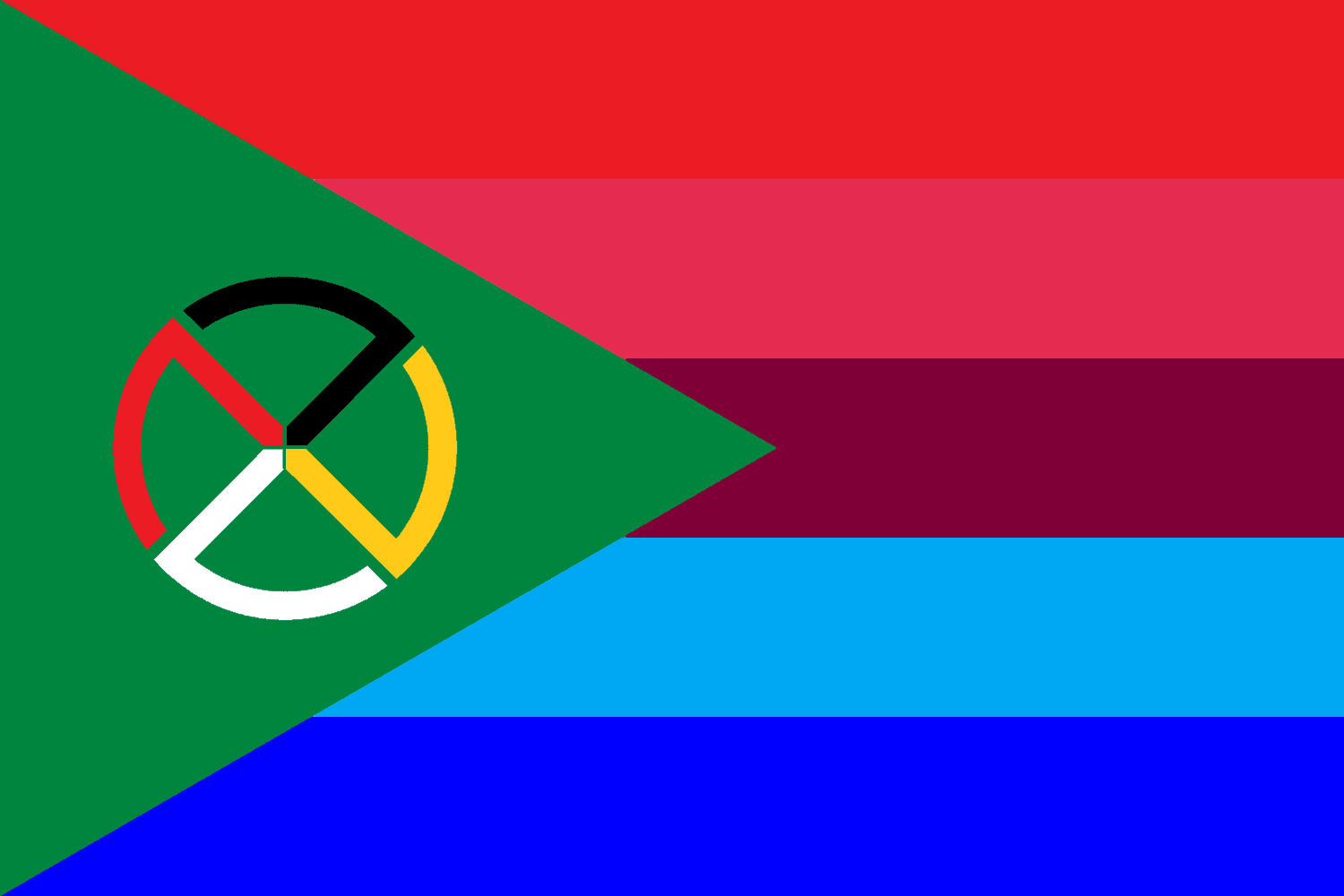 I lied but I won't lose any sleep over it This little number is partially inspired by @Newne76's Parliament of Religions wikibox- I figured that in a world where each of the major religions combines a theological position with a political one* , it made perfect sense that some sort of interfaith body would be the primary forum for international diplomacy in this little theological mélange I've made. The green is fairly straightforward, representing the Earth itself, with the sun cross most commonly used among the indigenous peoples of Turtur kept because of the fairly widespread distribution of the symbol historically. As for the stripes, red symbolizes the Mithraic diaspora, amaranth the Sinosphere, purple the Nazarene-Spartacists, turquoise the Mexica** and blue the Oyo*** family of religions. Smaller religions are allowed membership in the group but are not permanent members of the forum, in an arrangement similar to the United Nations Security Council.

*Not unlike Islam OTL, in contrast with the separation of church and state at least tacitly grounded in some of Jesus's statements about rendering unto Caesar.
**They've traded in the human sacrifice for more symbolic sacraments, but their knowledge of anatomy hasn't gone to waste, a robust tradition of blood and organ donation has given the Mexica and their vassals a top notch healthcare system by the standards of TTL.
***Having spread south from West Africa, essentially taking up every part of the continent not already in thrall to Rome or Byzantium. The Oyo started making inroads into Cipactli (S. America) soon after the Western Empire discovered Turtur (N. America). 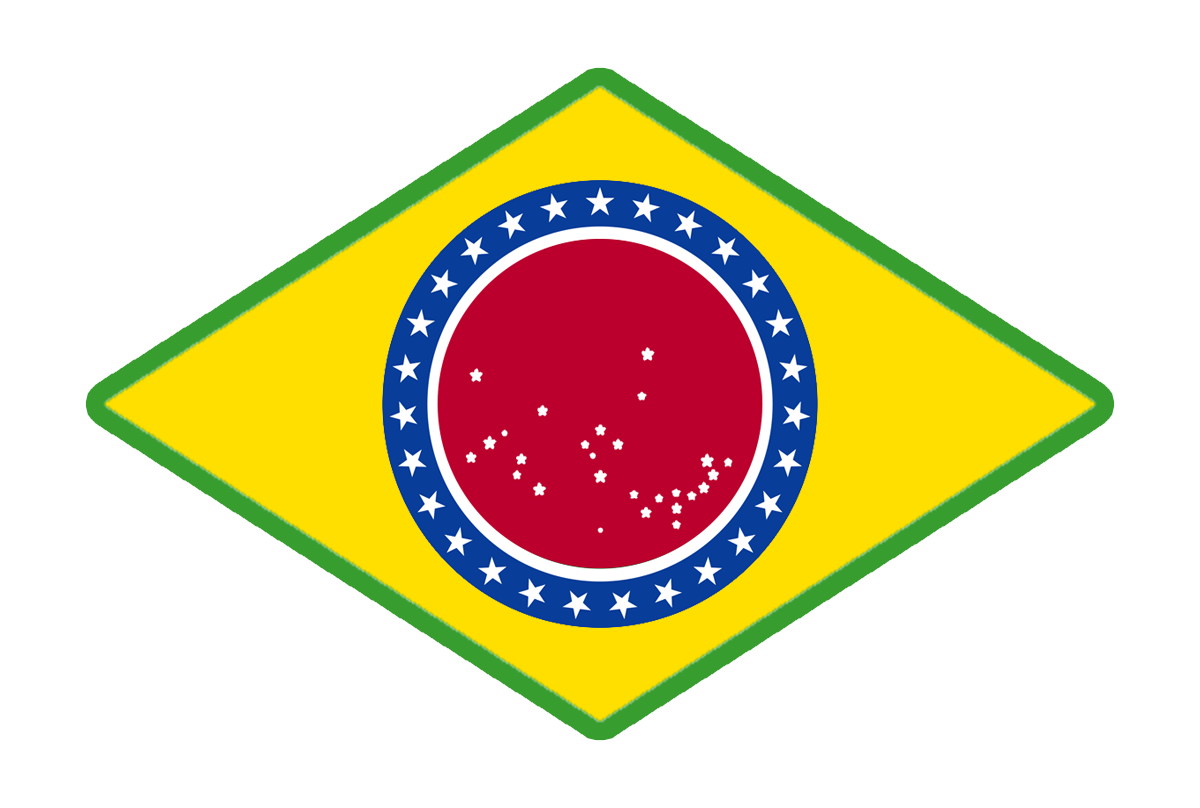 The Republic of Jazil (Brazil + Japan mixed.) , also known as Jazil is a medium micronation claiming sovereignty over 13 acres of land near Bloodyland, Philadelphia from Pennsylvania.

Which Montenegro flag do you prefer? I'm having trouble finding one that's good, but also simple. 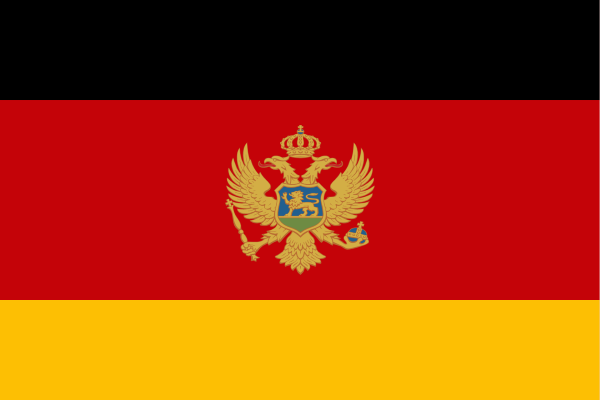 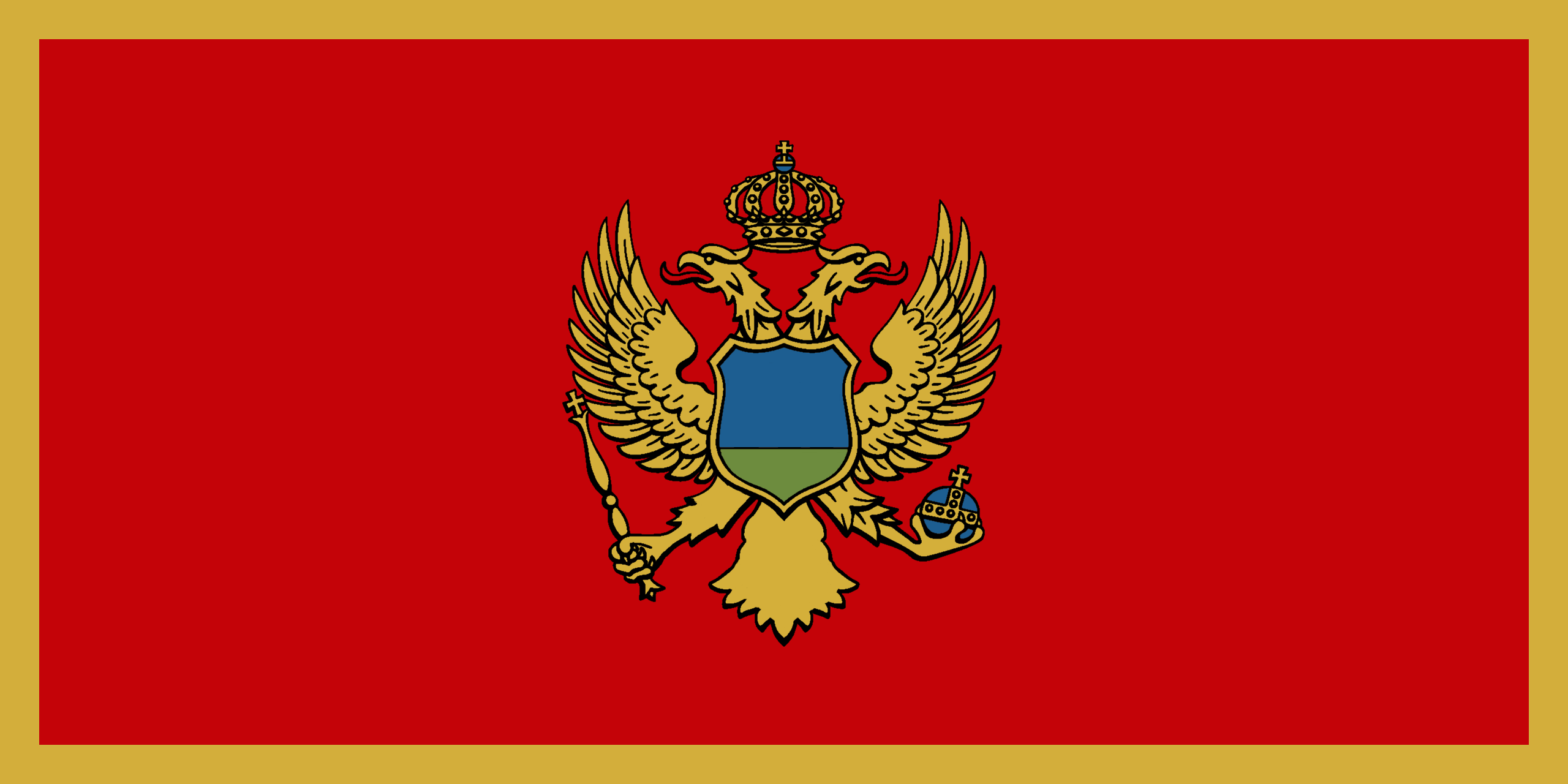 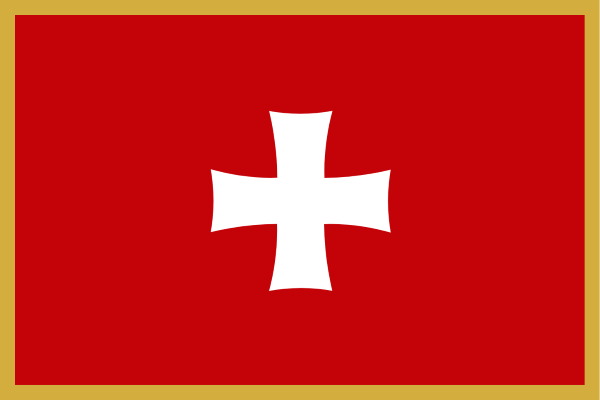 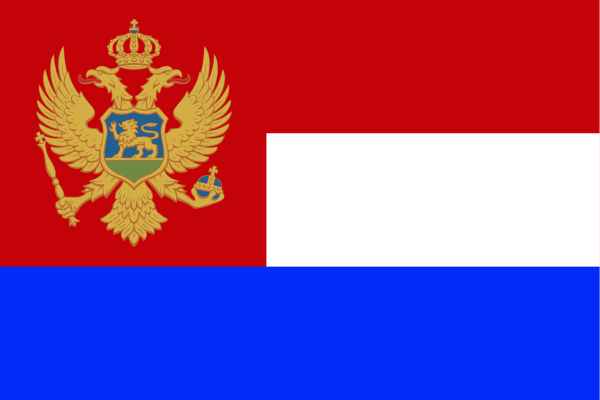 The Yellow Rose: The Liberated Republic of Texas 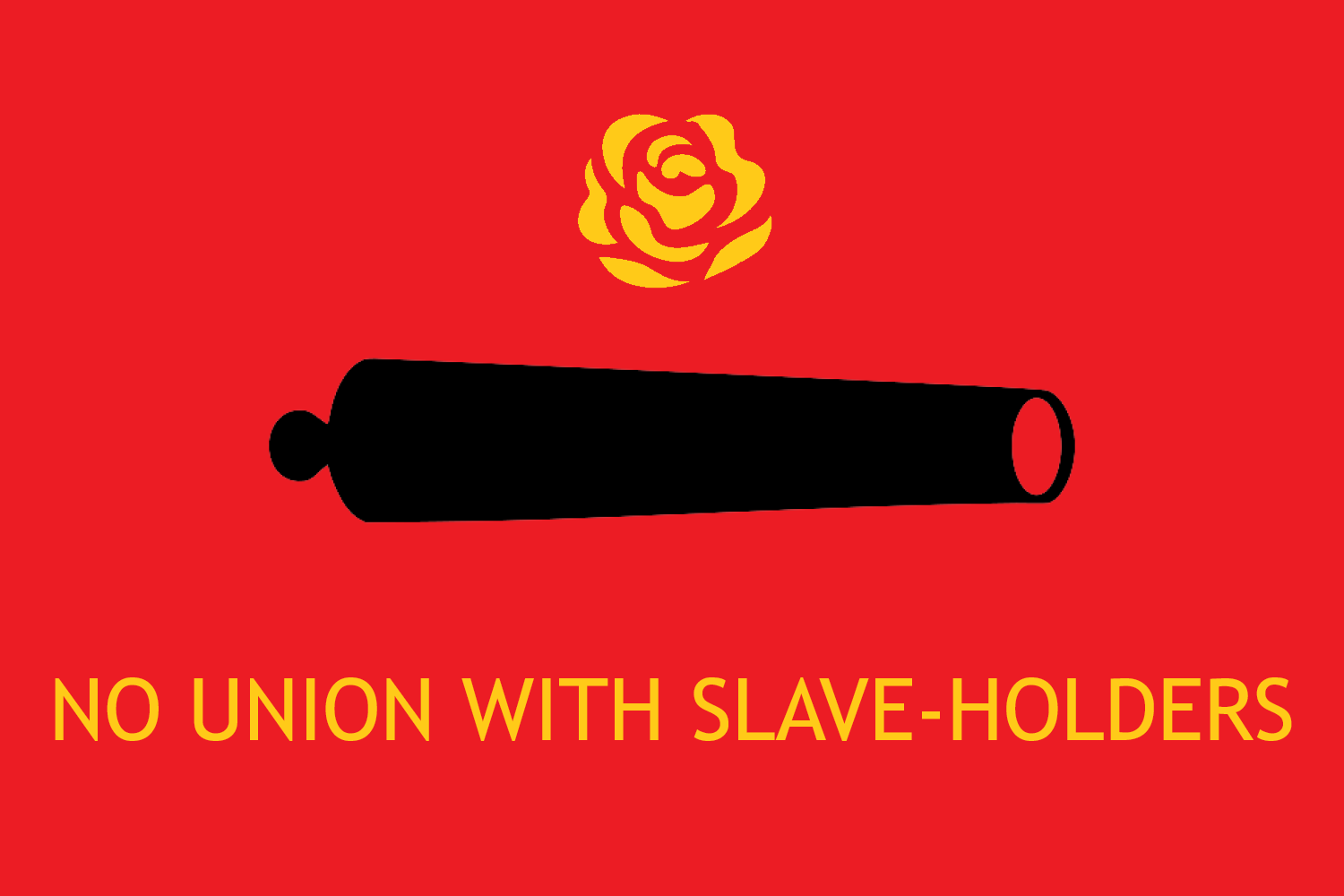 Founded in the wake of the Second Texas Revolution, the Liberated Republic of Texas declared itself forever free from the Confederate States of America under the leadership of the triumvirate of John Brown, Frederick Douglas and Charles Marx. With the failure of traditional abolitionism to defeat the slavocracy during the short-lived Dixie War, the Texan Founding Fathers unveiled a political program they called Amalgamation, billed as the great leap forward for the abolitionist movement. Calling for the active destruction of wage and chattel slavery alike, full equality of the races and women's rights, the doctrine of Amalgamation was enshrined in the new Texan Constitution. The LRT has made good on this heritage and is commonly regarded as a pariah state by the civilized world for a consistent policy of arming slave revolts, worker uprisings and colonial rebellions the world over, though the coming wave of decolonization owes much to the Texan policy of sheltering and training exiles and revolutionaries from around the world and is sure to expand their sphere of influence.

The flag of the Liberated Republic of Texas uses red to represent the blood shed for freedom and a black cannon to symbolize defiance. The yellow rose is the traditional symbol of Amalgamation, taken from the traditional association of the color yellow with people of mixed race, as seen in the song "The Yellow Rose of Texas', a version of which also serves as the national anthem. The national motto, "NO UNION WITH SLAVE-HOLDERS", taken from The Liberator, declares the Texan commitment to the destruction of slavery in all its forms the world over. This was inspired by a Marxist Texas scenario I saw recently, and I decided to see what I could do with a similar POD. As he seriously considered in real life Marx moves to Texas in his twenties, coupled with a larger wave of European immigration to the state in the wake of a slightly more repressive 1848 and John Brown being temporarily smuggled out of the country after Harper's Ferry. Rather than making Marx the central figure I decided to make Brown the elder statesmen, with Amalgamation serving as the Communism analogue in a timeline with a successful Confederacy. Aside from the focus on racial and gender equality in addition to more traditional anticapitalism and anticolonialism, Amalgamation also has an incredibly rich faith tradition rather than a tendency toward state atheism.
Last edited: Sunday at 5:05 AM
You must log in or register to reply here.
Top
Share:
Share
Top