I've hopefully made a good flag this time! 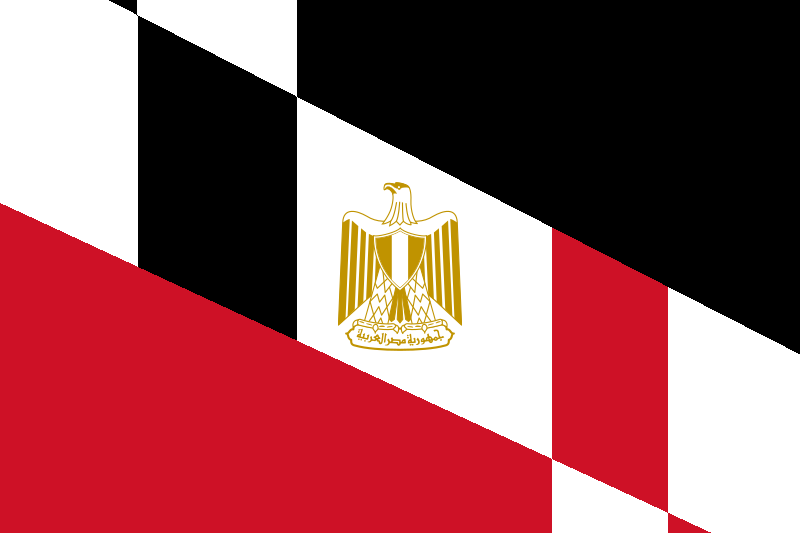 In 1927, following a turn of civil war, Egypt renamed to Egyptian Republic and changed their flag to a unusual style, with the coat of arms in the middle. It was literally different and everyone seemed to like it.

View attachment 566917
In 1927, following a turn of civil war, Egypt renamed to Egyptian Republic and changed their flag to a unusual style, with the coat of arms in the middle. It was literally different and everyone seemed to like it. 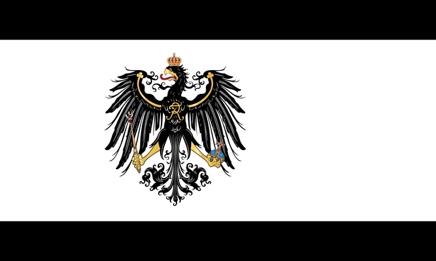 The remnants of the German Empire. As the country descended into dissolution, Kaiser Wilhelm III was forced to make a strategic decision. In July 1924, he quickly drafted and passed the Crown Separation Act, which separate the titles of German Emperor and King of Prussia into two distinct royal positions. Just three weeks later, Wilhelm III was forced to abdicate as German Emperor. This left him in charge of only the Prussian portion of the Empire. With this event, the German Empire ceased to be. Broken by war and internal divisions, Prussia is but a shadow of its old self, although the glory of the old kings was never truly forgotten. 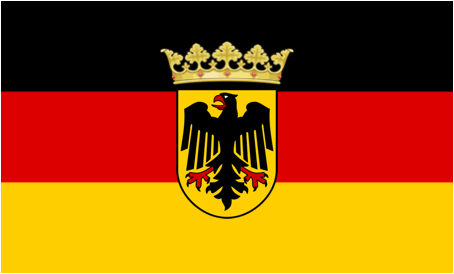 As Germany plunged into the chaos of war, an increasingly bellicose Britain eyed the developments in the Continent with great worry. Intent of maintaining the balance of power, the British invaded the northwestern coast of Germany during the waning days of Berlin. Prussia, Germany's successor, inspired little confidence. So, lawmakers in London ushered in the brand-new Empire of North Germany, Britain's ally in Europe. Powered by the unmatchable might of the British Empire, North Germany stands as the most formidable of the post-German states. 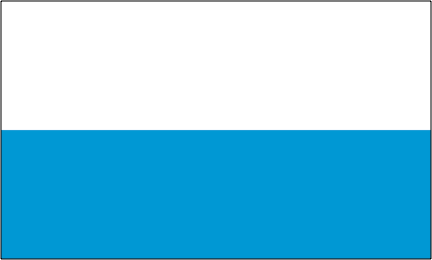 The catalysts of revolution. When Wilhelm III announced his country's neutrality amidst the brutal slaughter of their fellow brethren by Czech barbarians, few in Bavaria could stand it. Defiant of Berlin's orders, a "Bavarian Volunteer Legion" was formed to fight in the lands of Bohemia. This event ripples across the Empire, which grew into an earthquake that unseated the Kaiser. Progressively more agitated, the passions of the Bavarian people would culminate in April 1924, when Gustav von Kahr took control of Munich and demanded from Rupprecht I independence or his head. The King chose the former, and so Bavaria became the first state to break free from Germany. 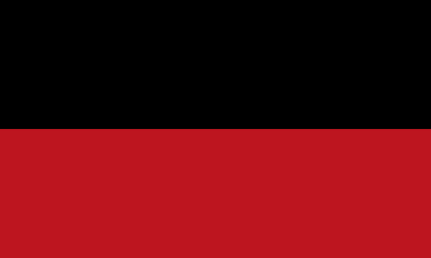 Born out of need. With Bavaria to the east and the melting pot of the Rhineland to the north and west, isolated Württemberg stood alone against their enemies. Between April and May 1924, lawmakers and military chiefs in Württemberg concluded that independence was the only way to preserve themselves. In late May, Albrecht I held a vote to decide the future of Württemberg. Support for independence was overwhelming. Württemberg was the only post-German state to be born without any bloodshed. 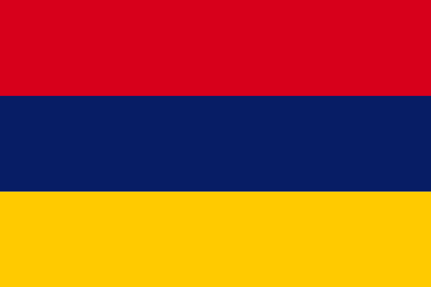 The Rhineland's path towards independence is long and bloody. The first shots were fired in March, when France invaded western Germany. With Berlin in disarray, the western provinces were left on their own to face the French onslaught. Under the Council of Cologne, Westphalia and Rhine Province declared their separation from Germany. They were joined by Hesse, Hesse-Nassau, Waldeck-Pyrmont, Lippe, Birkenfeld, and Baden, and together they established the Rhenish Kingdom. This assortment of states then went on to fight the brutal Rhenish War of Independence against French invaders, internal revolutionaries, and Prussian monarchists. Forged in war, the true potential of the Rhenish Kingdom is yet to be tested. 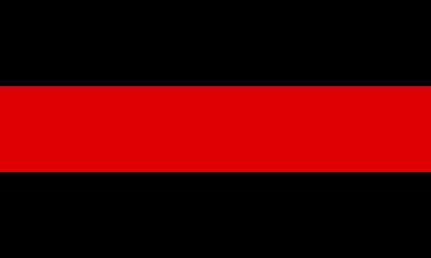 A revolutionary state established by ethnic Sudeten Germans during the tumult of the Bohemian Civil War. The Bohemian War of Independence would only bequeath the country's inhabitants with a fierce animosity between Czechs and Germans. The Varnsdorf Massacre, in which Czech paramilitaries murdered hundreds of Sudeten Germans, set alight the powder keg, and unintentionally spelled the doom for the unresponsive German Empire. Aided by Austrian and Bavarian troops, Ferdinand Porsche established the State of German Bohemia, claiming sovereignty over the entire country. The Czech people would be subjected to some of the most horrific atrocities of the 20th century. 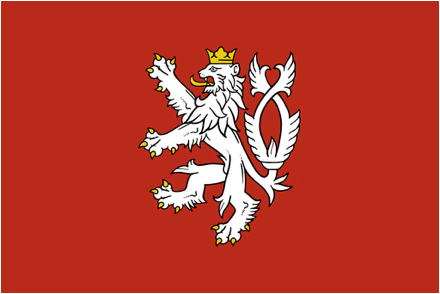 Bohemia was a promise of peace. The unlawful arrest of Czech intellectual Masaryk led to widespread protests in the Austrian territory of Bohemia, which culminated with the state's independence in 1923. Bohemia was the first presidential democracy to be born out of the former Austria-Hungary. However, factional infighting and foreign aggression tore the country apart. In 1925, Bohemia submitted to Austrian overlordship yet again, although the spirit of the Czechs endures. 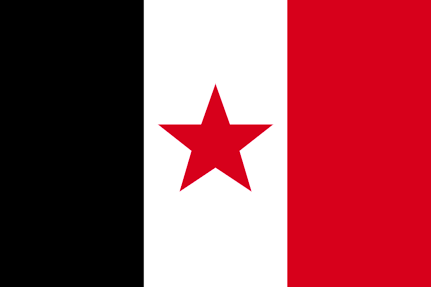 After being defeated by the Austrians and Bavarians following Italy's disastrous involvement in the Bohemian crisis, boiling tensions detonated into revolution. A French invasion was enough to overrun northern Italy with socialist fervor. Socialist Italy, backed by the French, waged the ruthless Italian Civil War, as the tattered remnants of the kingdom moved south and were set ablaze.Only a British intervention and the SRI's own greed spared the rest of the peninsula from the incendiary rhetoric of socialism bred in war. 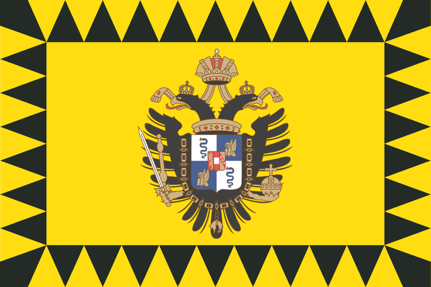 Austria's old dream rekindled. When Austro-Bavarian forces occupied northeastern Italy, Austria made a lasting investment, reestablishing the old Habsburg possessions in the Lombardy-Venetia region. This grandiose expression of Austrian pride would prove worthwhile, when Italian socialists were halted by the Veneto. Although merely an extension of Vienna's power, the Veneto still has a part to play, further down the line.
Last edited: Jul 17, 2020

In an unknown date in the future, the United States is in a raging civil war. The specifics of such a war are largely unknown, but what is known is that a man from Northern New York leads a massive rebellion, seizing control of the state. This rebellion eventually seizes control of the main 13 states, while the rest of America burns. The Appalachian Empire is born, although it may espouse itself as a bastion of freedom, it is an authoritarian dictatorship under the command of this man, who has crowned himself King of the new Empire.

The Empire outcompetes the other states in a long grueling campaign. However the damage to the world was done, as something known as The Event occurs, which renders modern technology and life useless. The Empire dominants North America, and after he dies, it collapses into various successor states.

3,000 years later, the Empire is remembered much like Rome, and many seek to achieve such a thing. Eventually, President Edward IV, of the Kingdom of Noleans replicated a similar thing under the age old name 'United States'.

Flag of the Appalachian Empire:

The sword represents the trajectory to victory, the single mindedness of their leader and follows, the black represents death and despair, the stripes are old nostalgia to the good old days, while the circle part with the black stripes is the 'trinity' of the empire "Pursuit, Valor, Foresight."

While the reaf around the swrd represents the duality and mirroring of opposing forces creating equality and balance.

Which is what the trajectory and pursuit of their goals achieves. Equality and Balance, between opposing forces.

Nothing too complicated, just an ensign for the US Army Air Service of WWI in the style of the RAF 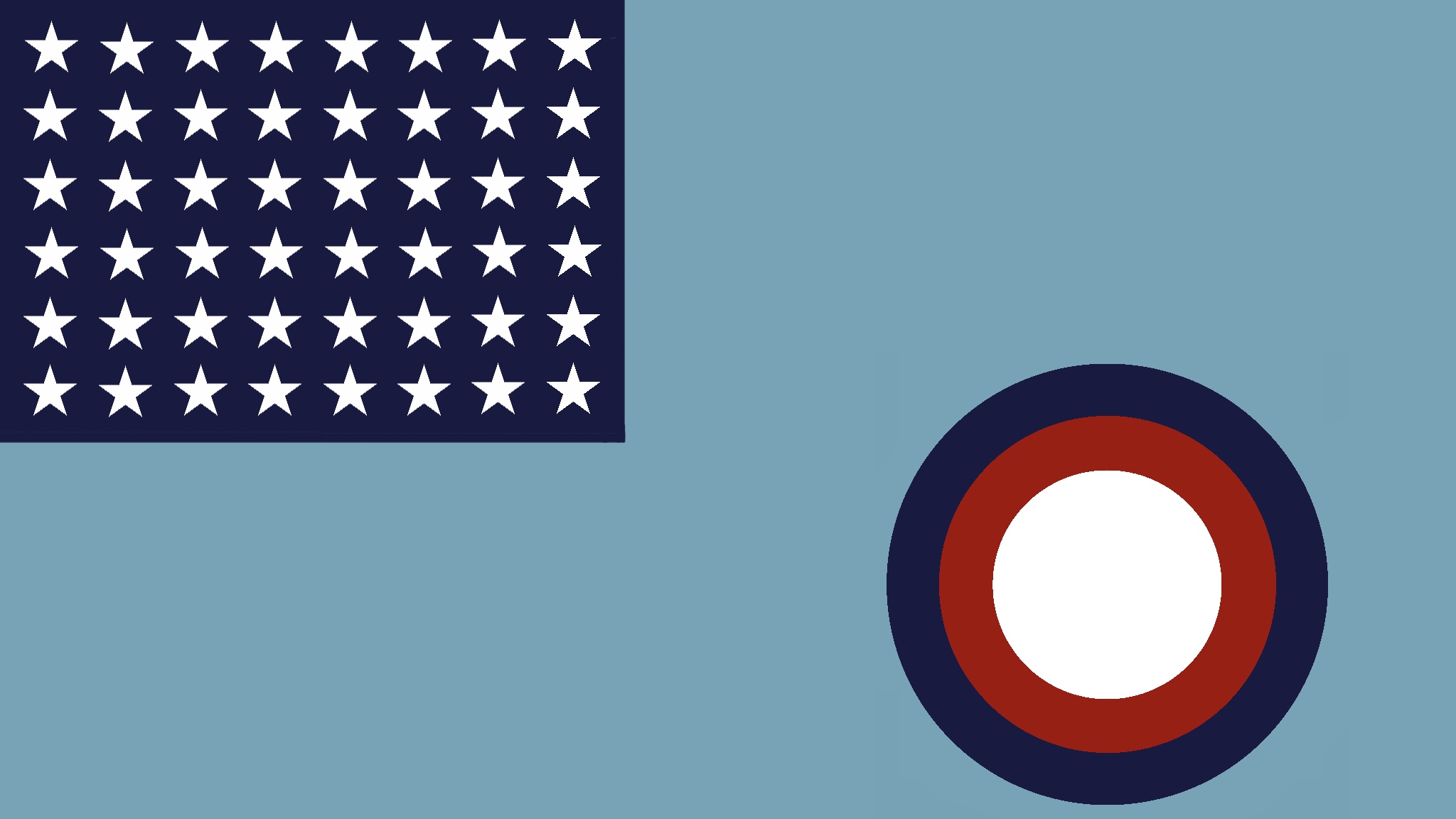 @Aztekk nice flags
Additionally I do like your style of using spoilers for sections. Makes it easier to scroll back up and down on a phone!

View attachment 566917
In 1927, following a turn of civil war, Egypt renamed to Egyptian Republic and changed their flag to a unusual style, with the coat of arms in the middle. It was literally different and everyone seemed to like it. 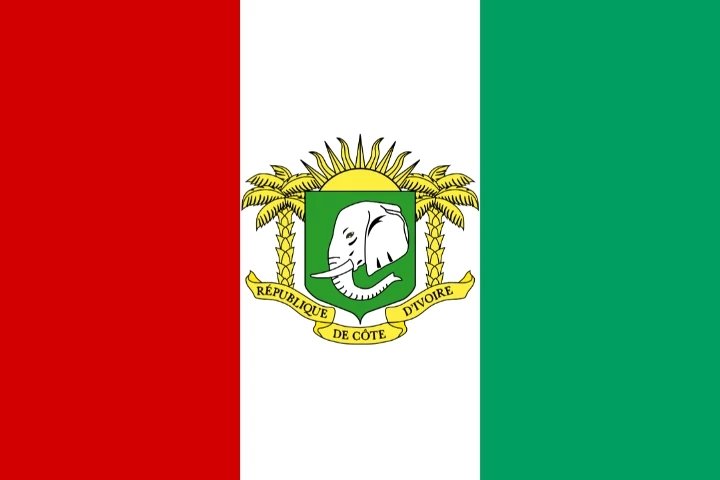 In 1927, following a turn of civil war, Egypt renamed to Egyptian Republic and changed their flag to a unusual style, with the coat of arms in the middle. It was literally different and everyone seemed to like it.

An alternative flag of Georgia if the Confederate flag had not been controversial: 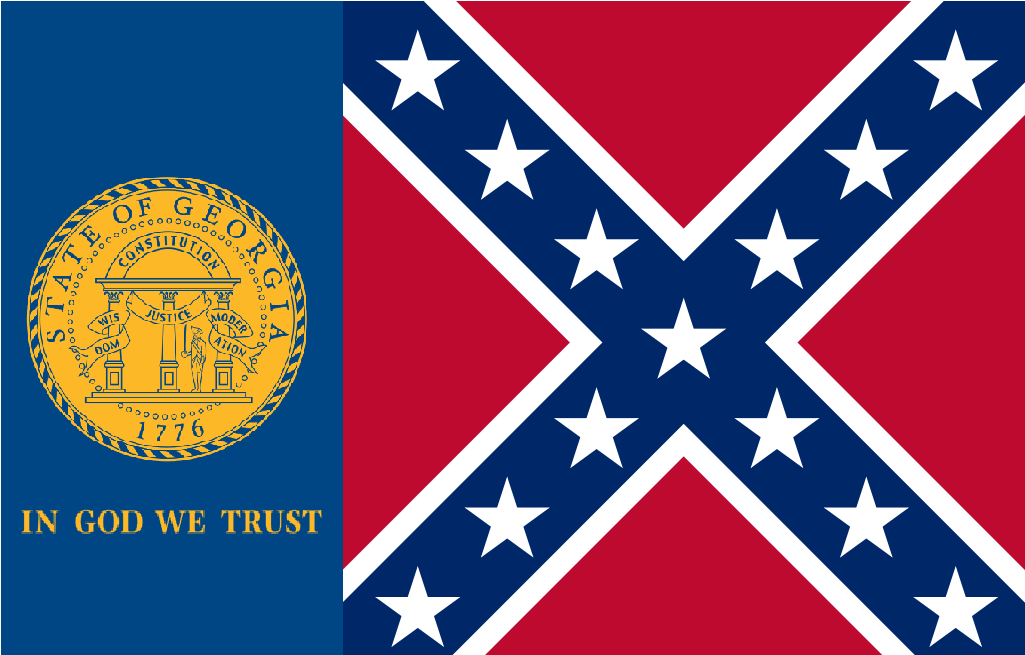 P.S.: Sorry if the both blues are a bit differents...

Flags of the Dominion of Patagonia and her states: 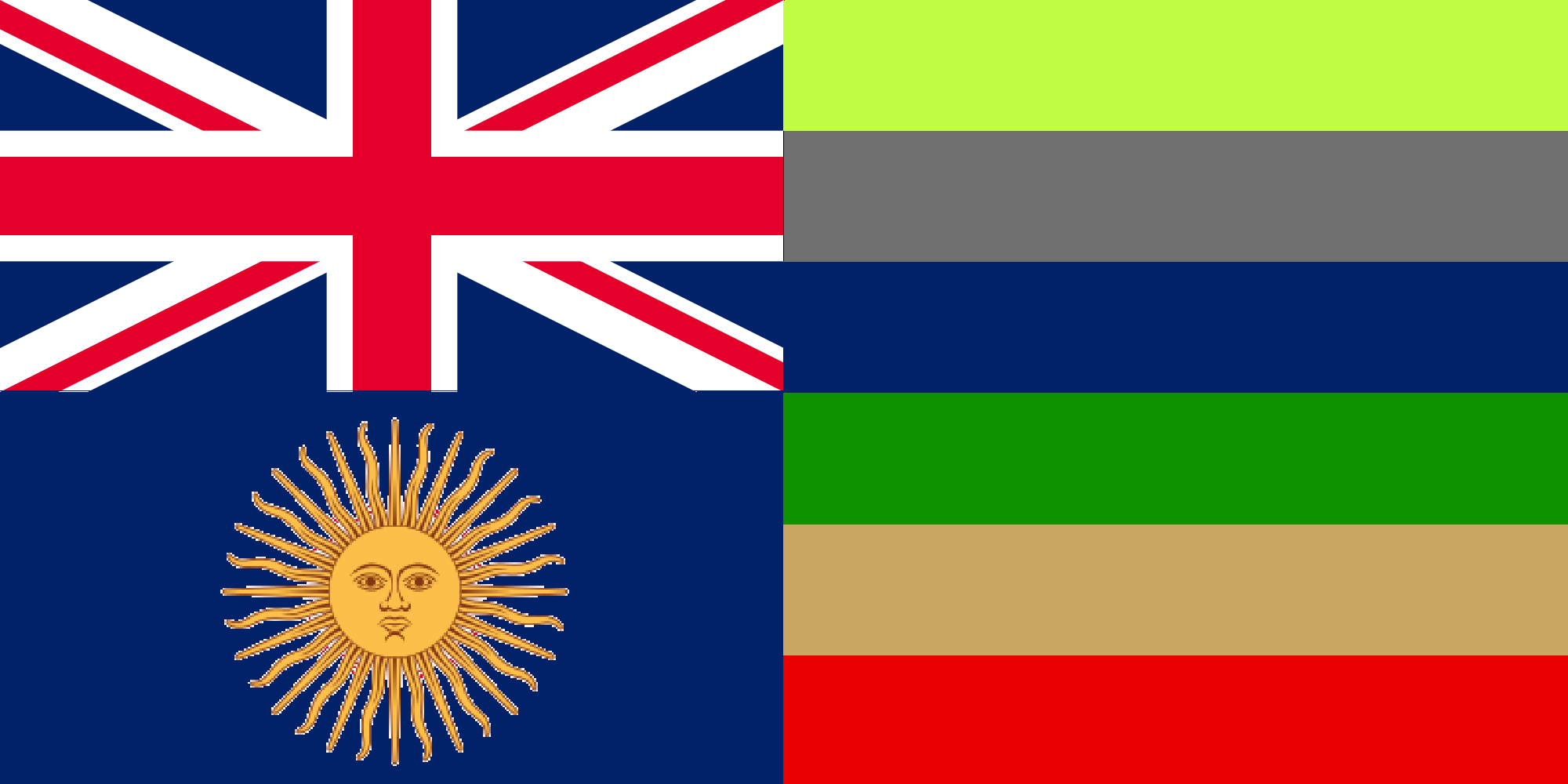 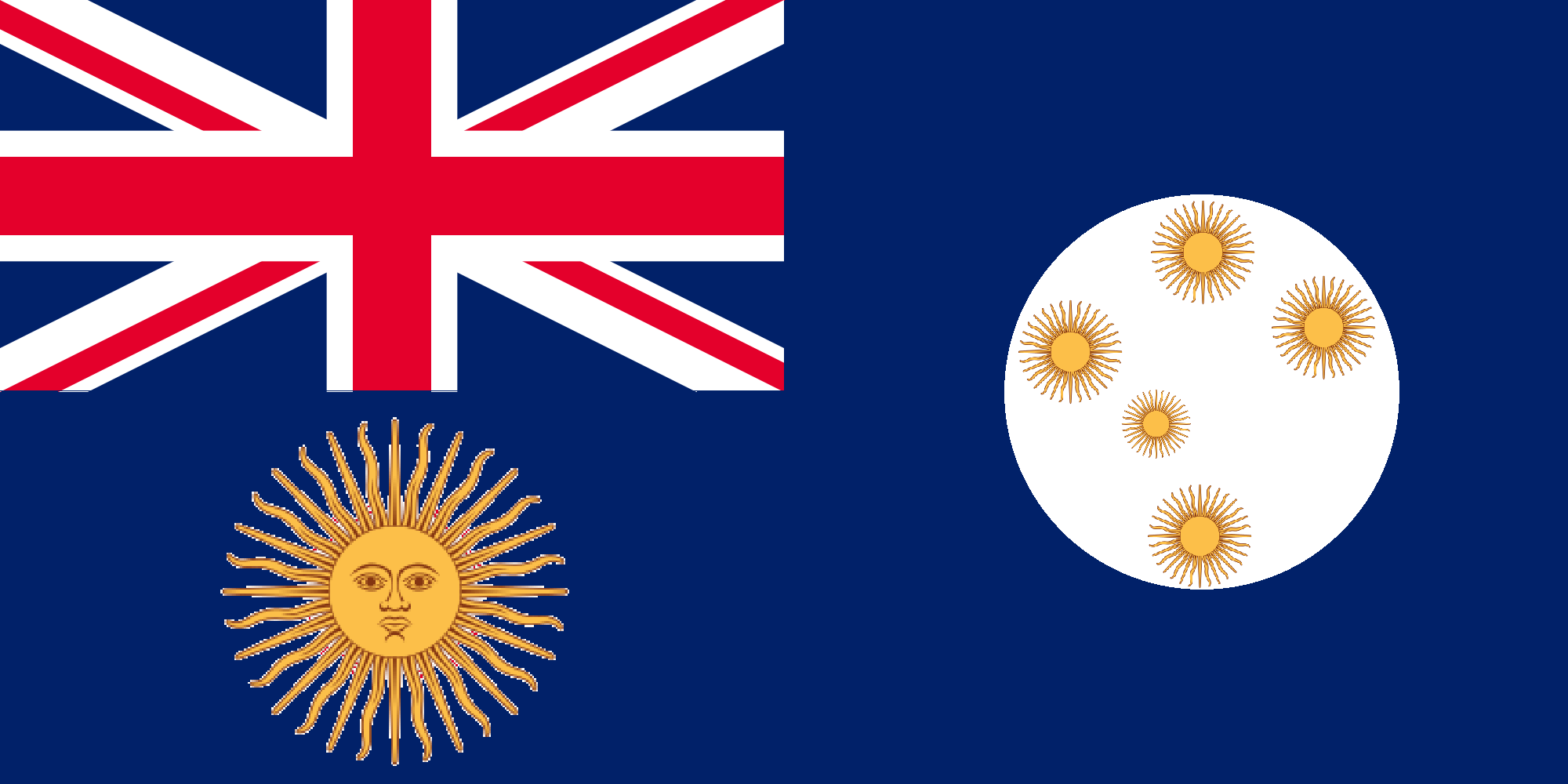 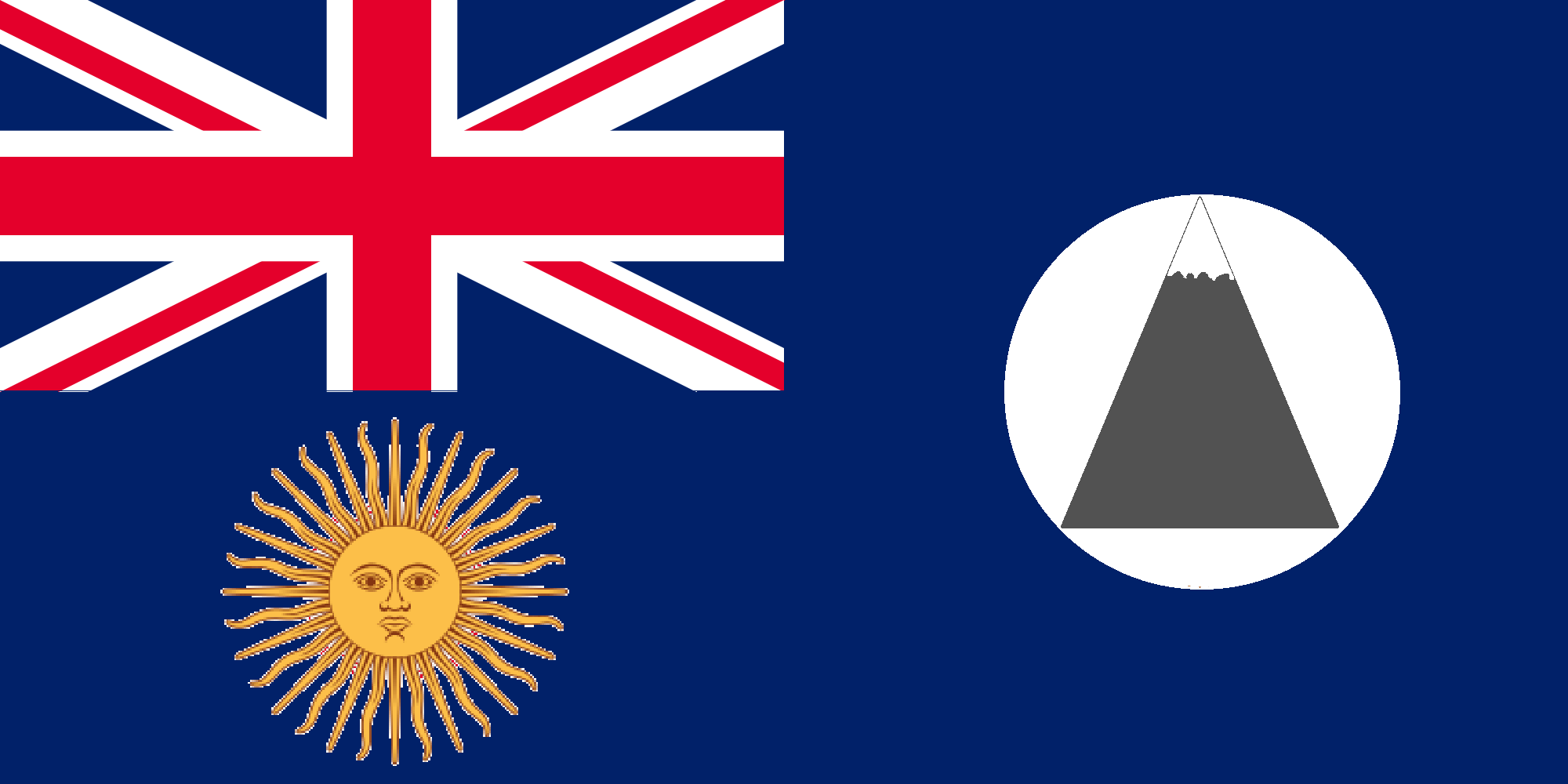 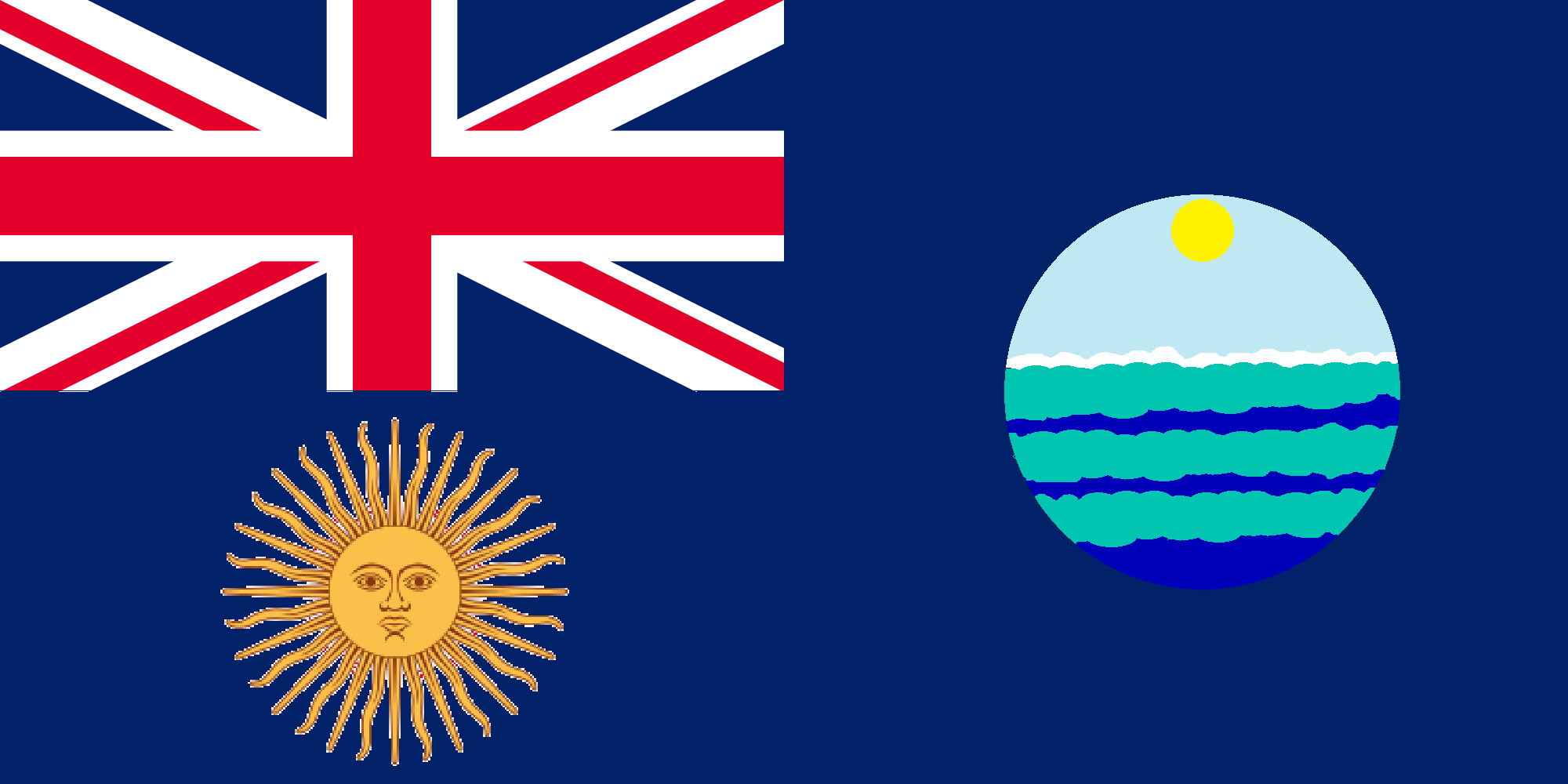 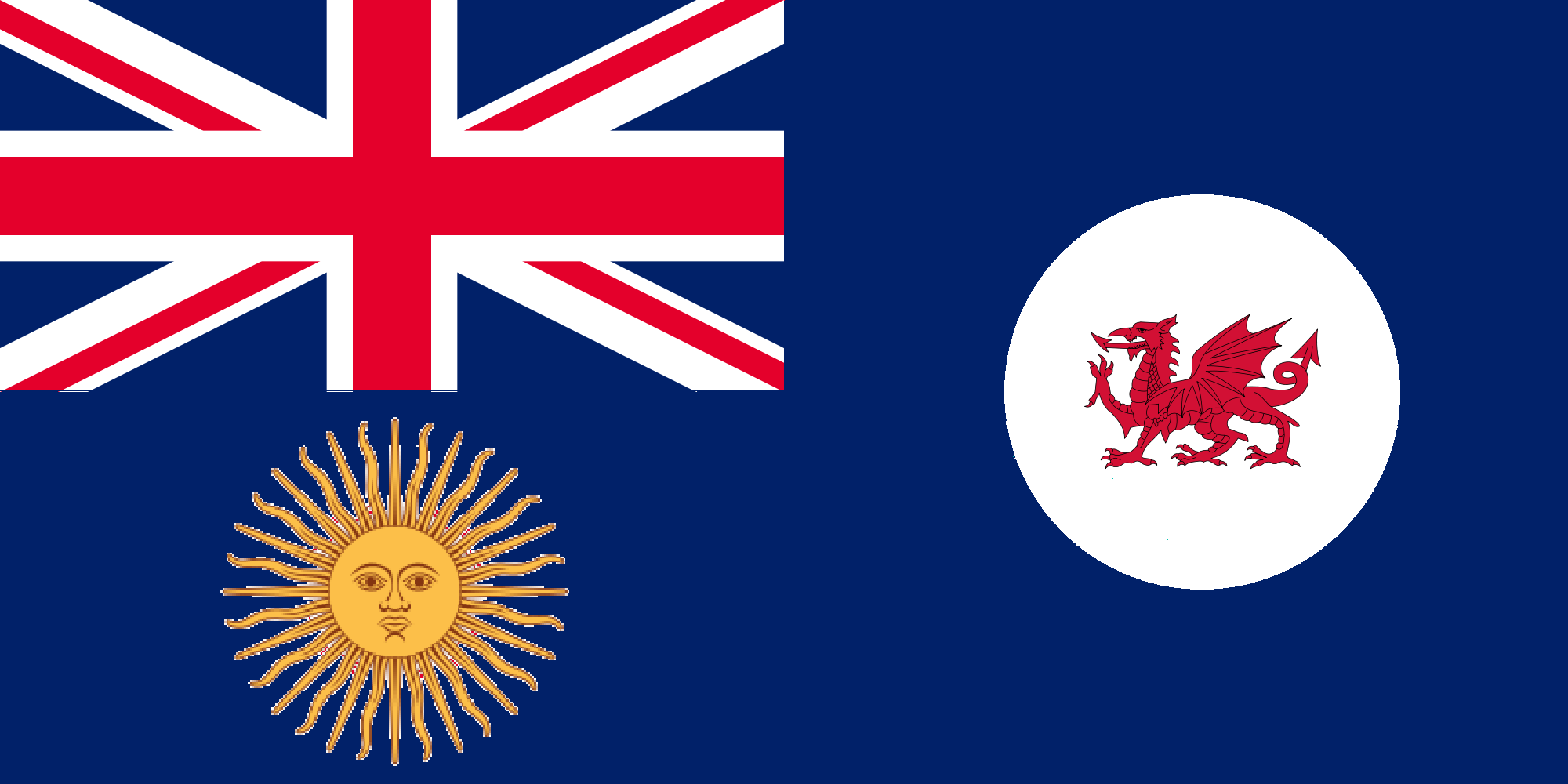 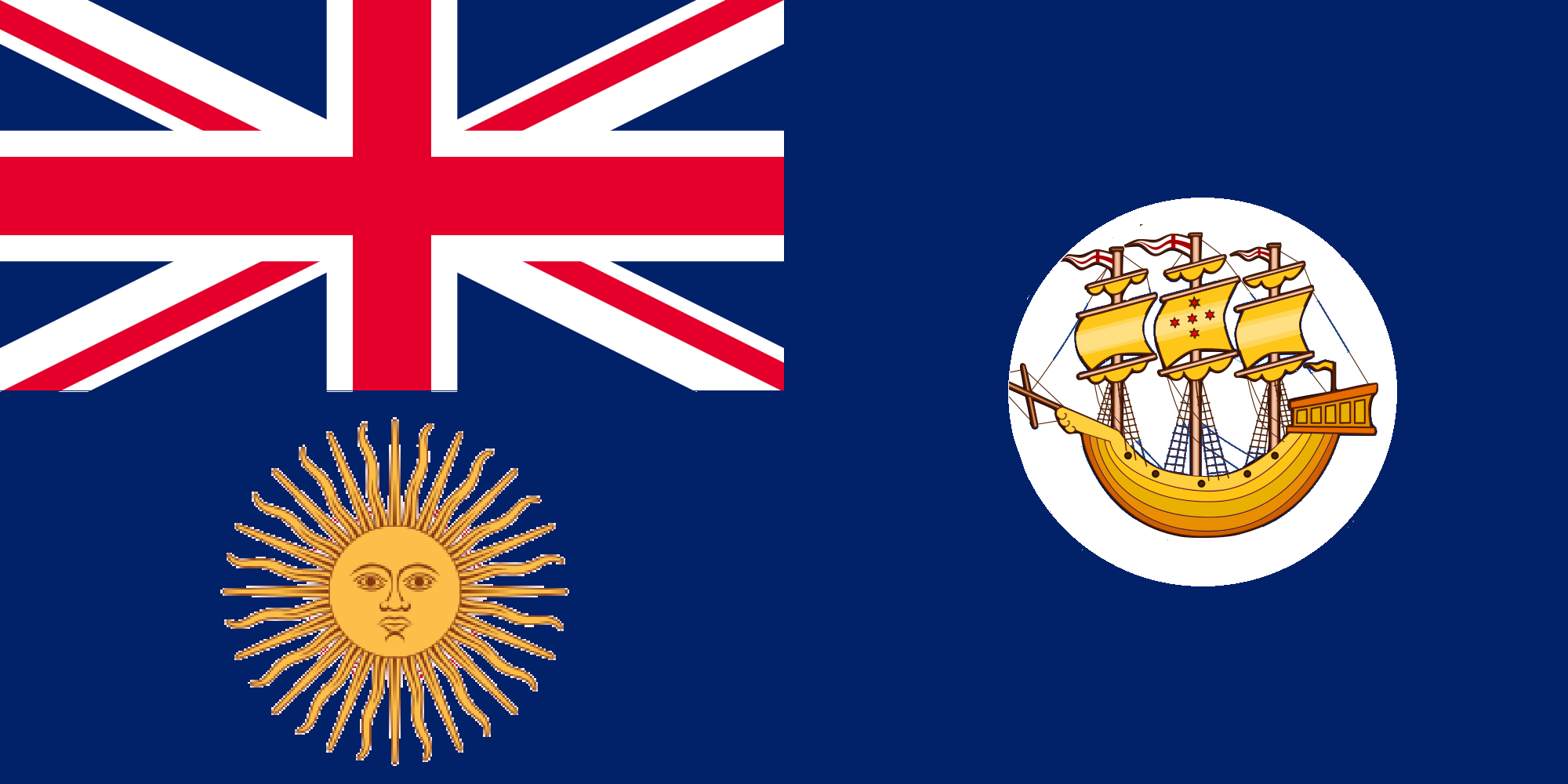 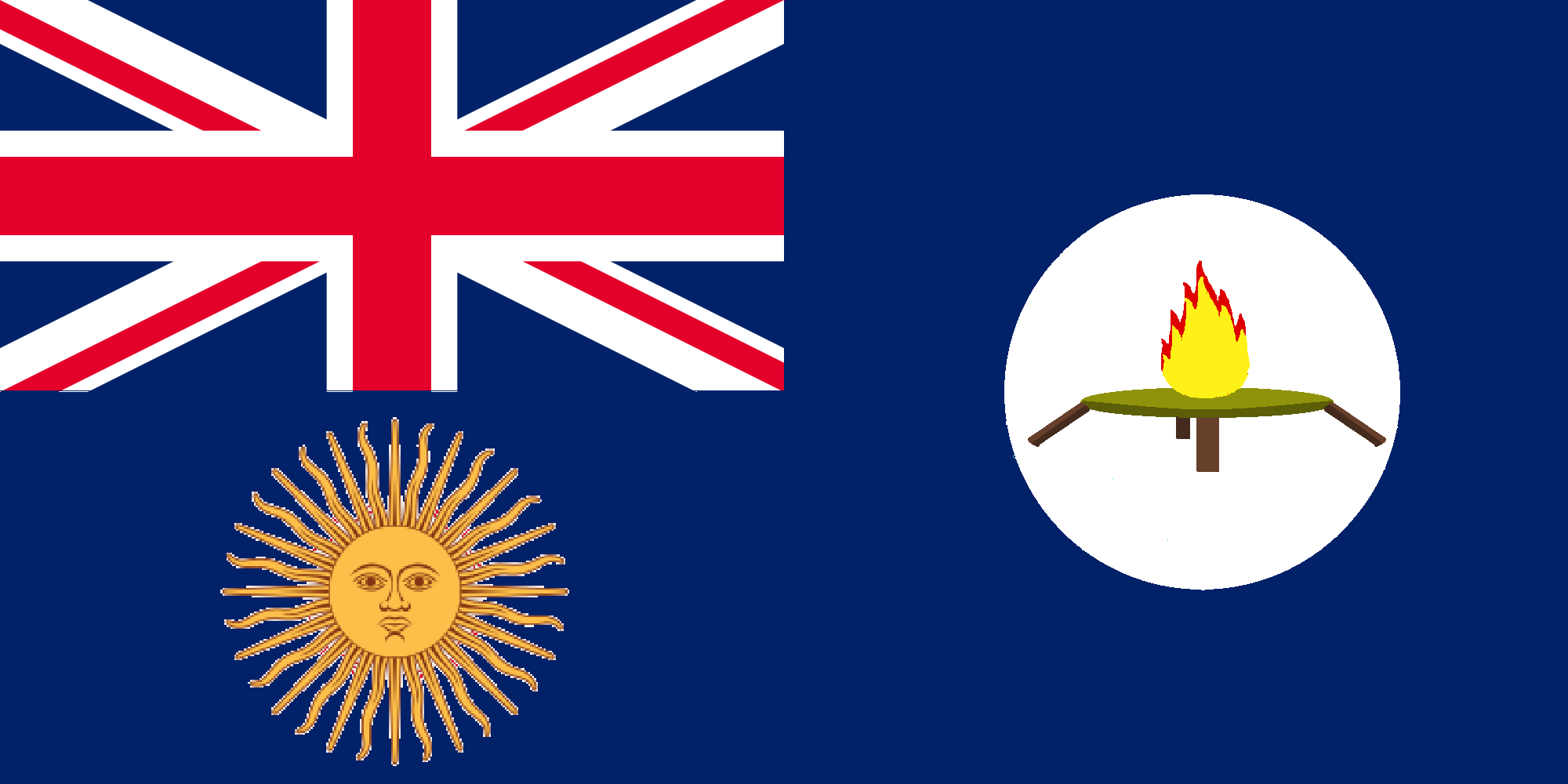 Fireland and the Falkland and Other Outlying Islands (FF)

All of these are from a British Patagonia TL I'm considering making; Probably won't happen, and if it does I doubt it'll be very good. Now to the flags;

The national flag is intentionally weird-looking. As with the other flags, it has the Union Jack in the canton, the Sun-of-May (chosen to represent the unity of the territories upon its federation as well as the region's distinct heritage) on the hoist side and six bars on the fly side. The light green is the fertile land of Patagonia (Colorado), the grey is the mountainous landscape of Primrose, the blue is the waters of Pacifica, the green is the Welsh ancestry of Wladychfa, the brown is the dry steppe of Desire, and the red is for Fireland.

tom said:
Any tips on how I could make these flags on my Mac?
Click to expand...

If you are used to vector graphics, Inkscape is a useful free application you can use to make flags. If pixel graphics are more your thing, there's also GIMP.

On the Vexillology subreddit, I found this flag of Japan done in the style of Brazil, and it inspired me to make this odd rendition of Ohio's flag in the same style: 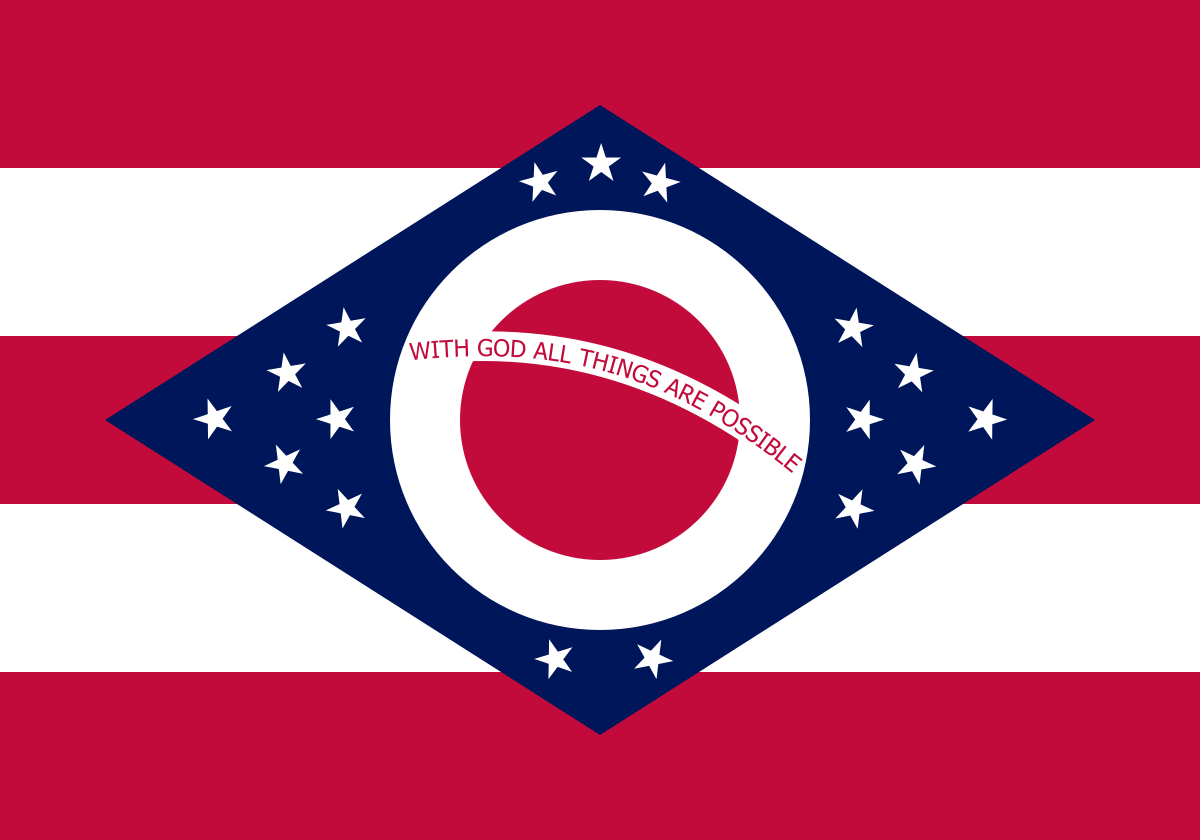 It personally like, enrages me that the US state flags have words on them, and that many of them are poorly designed.

So, I'm going to try and write a western alternate history taking place in a British Dominion of California which takes place in an alternate 1870s in an alt Utah. I'm still working on the kinks, characters and locations but I'd figure I'd churn out two flags of this alternate California as it is my first contribution to this thread: 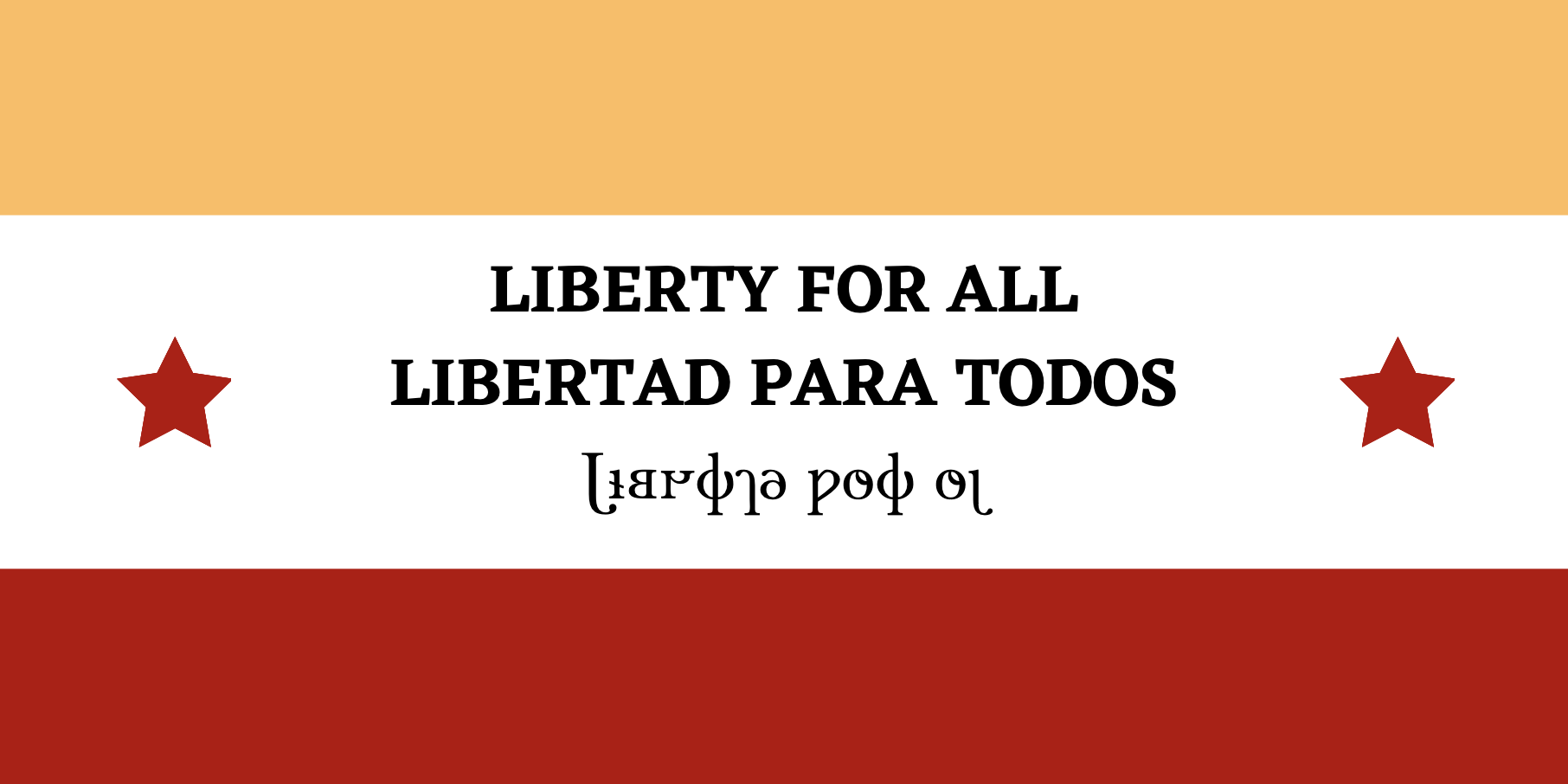 Flag of the Californian Revolutionary Party
Designed by: Unknown (Attributed to leader of the Confederation Reform Party Leader from Sacramento, Caleb T. Fay: 1865-1872)
Adopted: Appeared and used since the late 1860s, Adopted in 12 June, 1872

(I used an online translator for the Deseret alphabet, apologies if it is off)
(Any likeness to past flags/designs is purely coincidental, and I apologize if it infringes on any such flag)
Last edited: Jul 22, 2020

Hello, all, I was wondering if anyone could make a flag for me that would feature in an alt-WW2 story I’m writing. It has a red cross potent in a circle of white with the rest of the flag being black.

If anyone could do this for me, I would be very grateful. 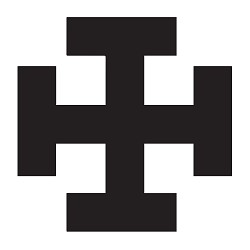 Can we expect a TL or a map based on this? 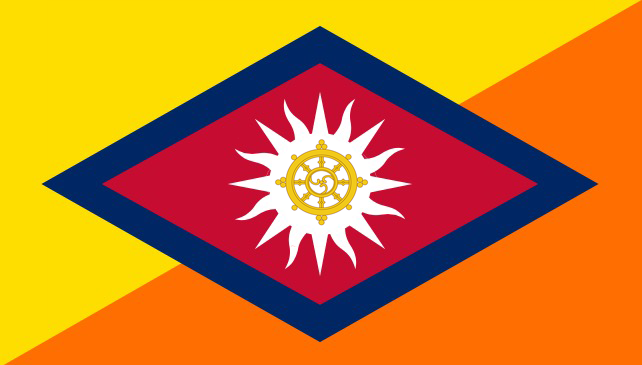 Flag of the Kingdom of the Himalayas; a union between Nepal, Bhutan and Sikkim.

Here's a proposal flag for the Socialist Union of Britain: 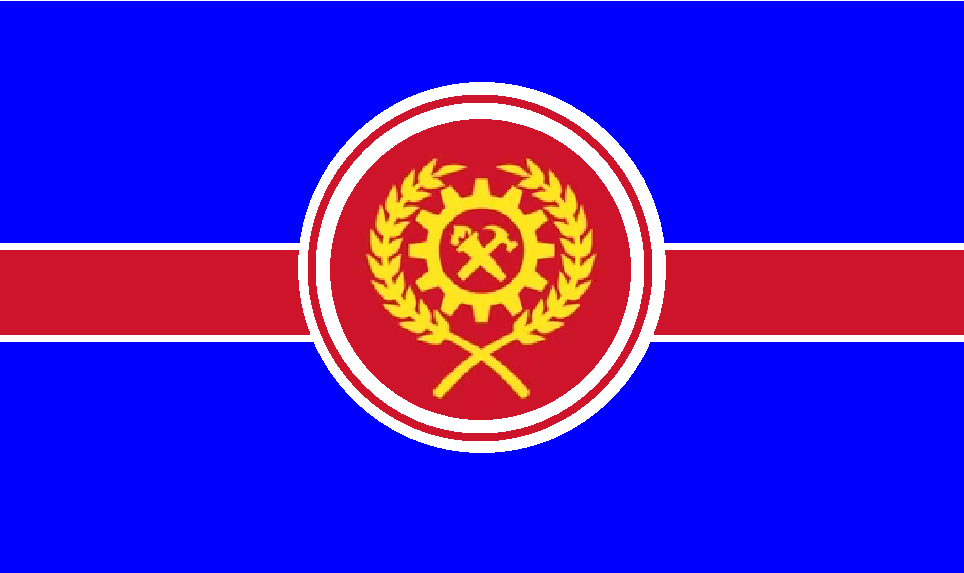