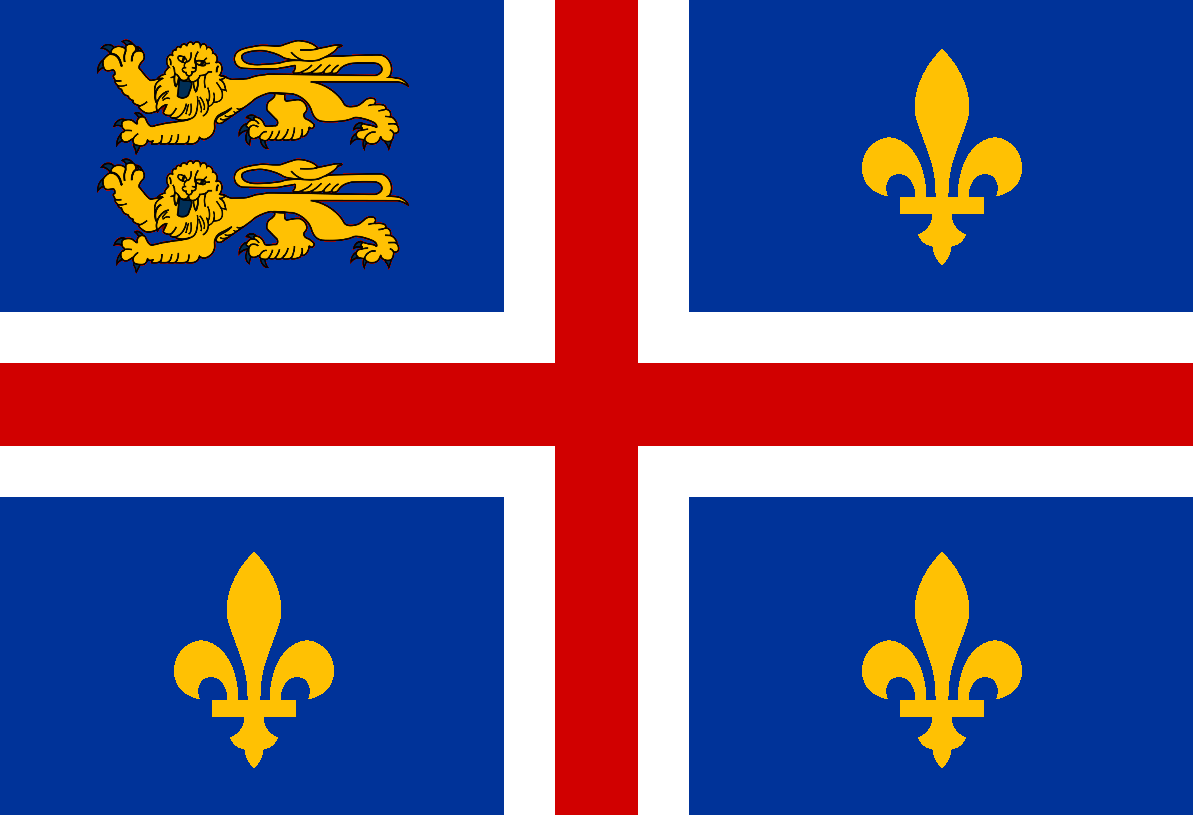 A refined flag of the Dual Monarchy of England-France from the mod Divergences of Darkness for Victoria 2. I never saw a good looking high-definition reconstruction of the flag of this very interesting country flying around on the Google Images page which is why I decided to do it myself.
Last edited: Mar 21, 2020 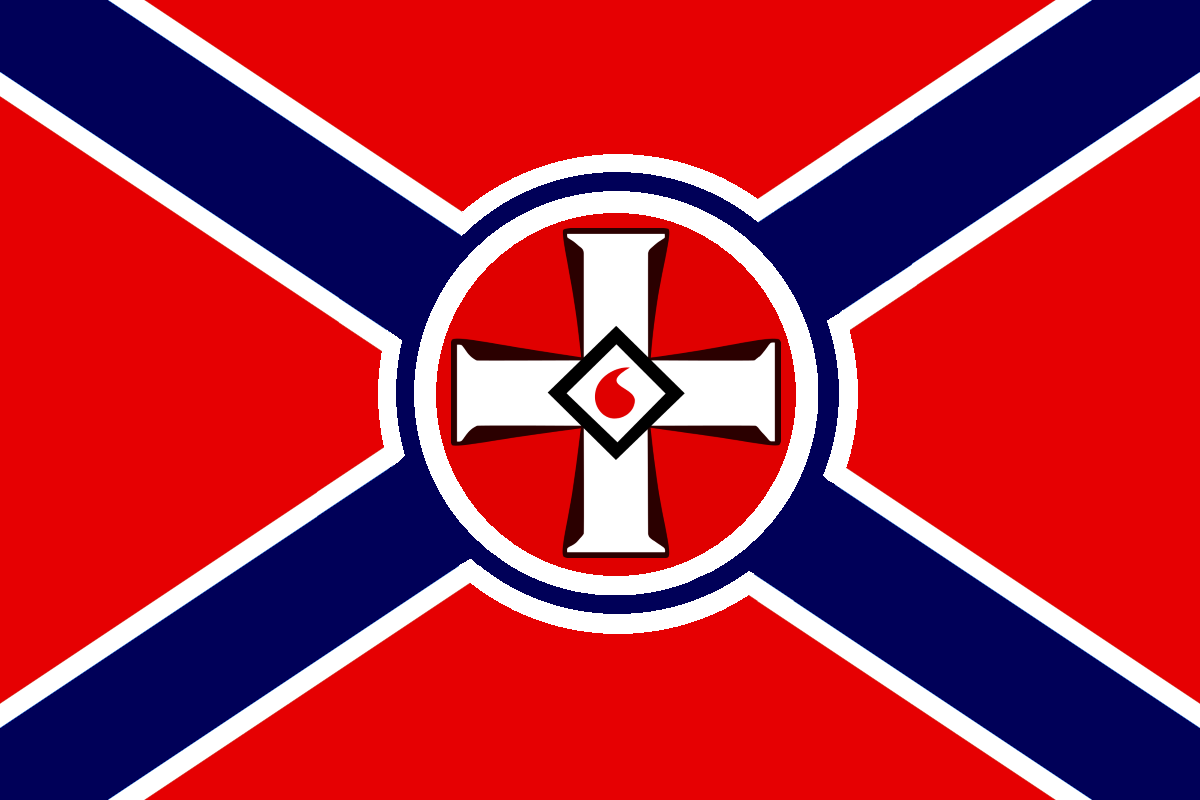 My flag for the Imperial Wizardom of America, a Ku Klux Klan dominated state 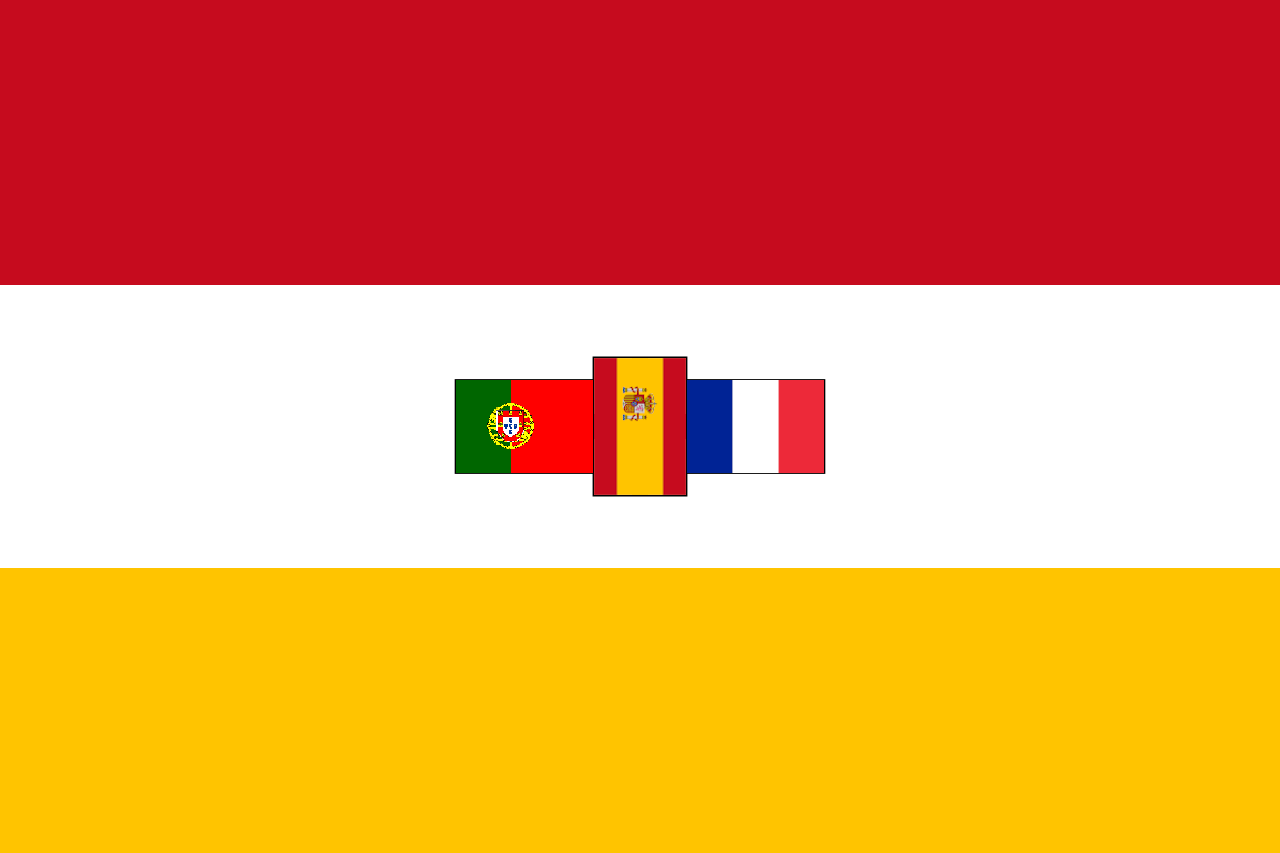 A flag of Equatorial Guinea in the style of the old South African flag. The three flags in the middle represent the three official languages of the country.
Last edited: Tuesday at 12:34 PM

From what I call my "timeline-to-be" with the current name idea being "the Tsar, the Kaiser and a Springtime Revolution".
The Flags for the three current claimants for the legitimate government of South Sudan: 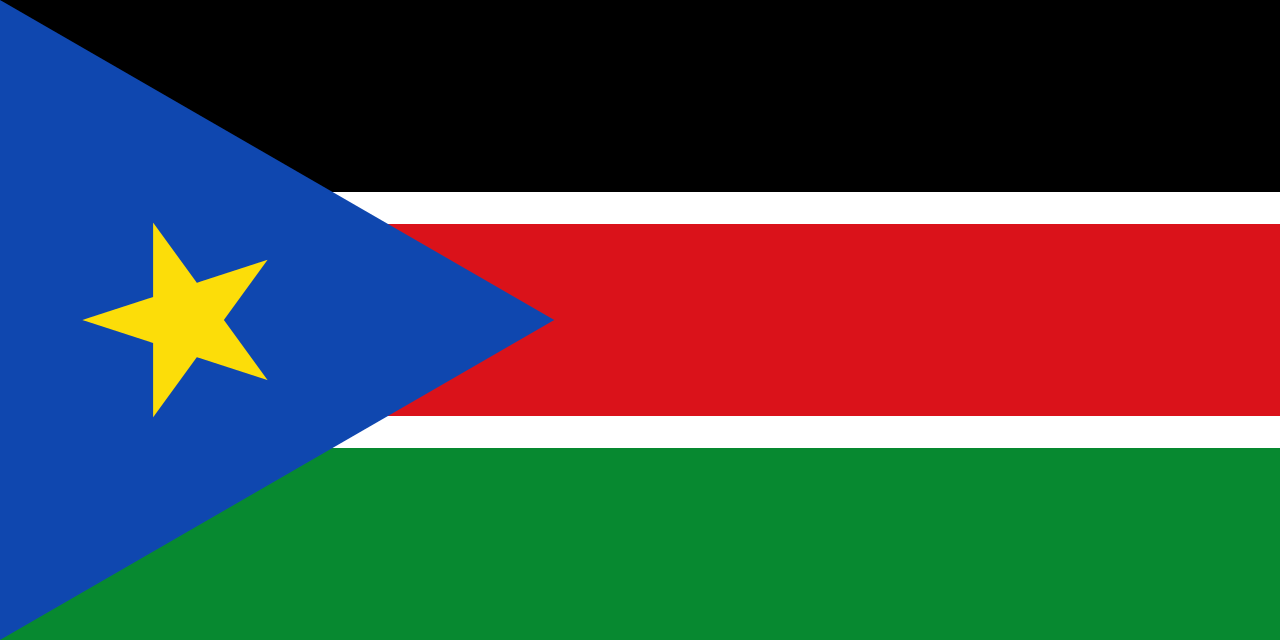 The Flag of the Republic of South Sudan (also the Flag of South Sudan OTL), the internationally recognized "legitimate" government. Currently still holds the International Concord seat, and operates as a government-in-exile in Egypt. South Sudan ITTL, gained independence from the (Socialist) Democratic Republic of Sudan in 1977. The government fell to a socialist insurgency 2015-2019, as the fall of the Africanist Republic of the Congo (Saddam/Assad analogue followed by war on terror/civil war) kicked off several widespread insurgencies in Central Africa (2015 was a rather eventful year for TTL actually, there are more stuff), with two being rather active in South Sudan. This government lost last of the ground it controlled in 2019. (The legitimate, capitalist government) 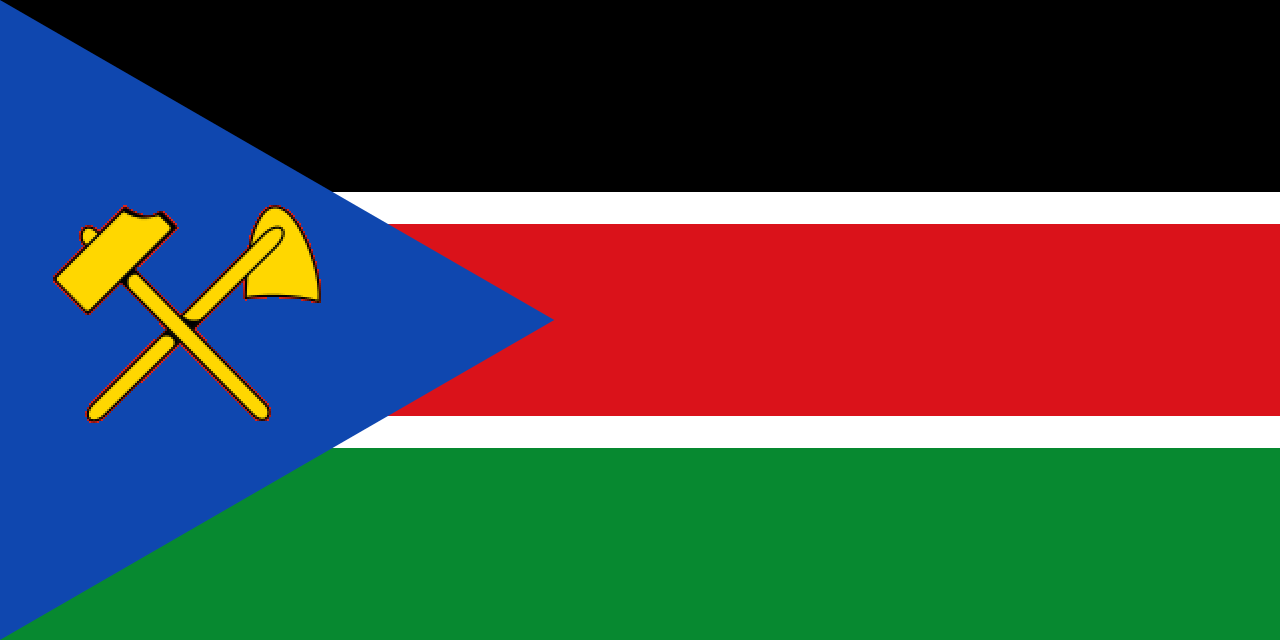 Flag of the Social Republic of South Sudan which was fully established in 2019. It is recognized by 7 sovereign states (Chinese Social Republic, its 5 puppets and American Socialist Federation) most of which are themselves partially recognized but with International Concord memberships (that said, West Zambia only barely managed to get a membership). Also called "Southeast Sudan" (because East South Sudan doesn't roll off the tongue) This flag is also used by the African Peoples Liberation Army-South Sudanese Section. (*Maoist Chinese Client State) 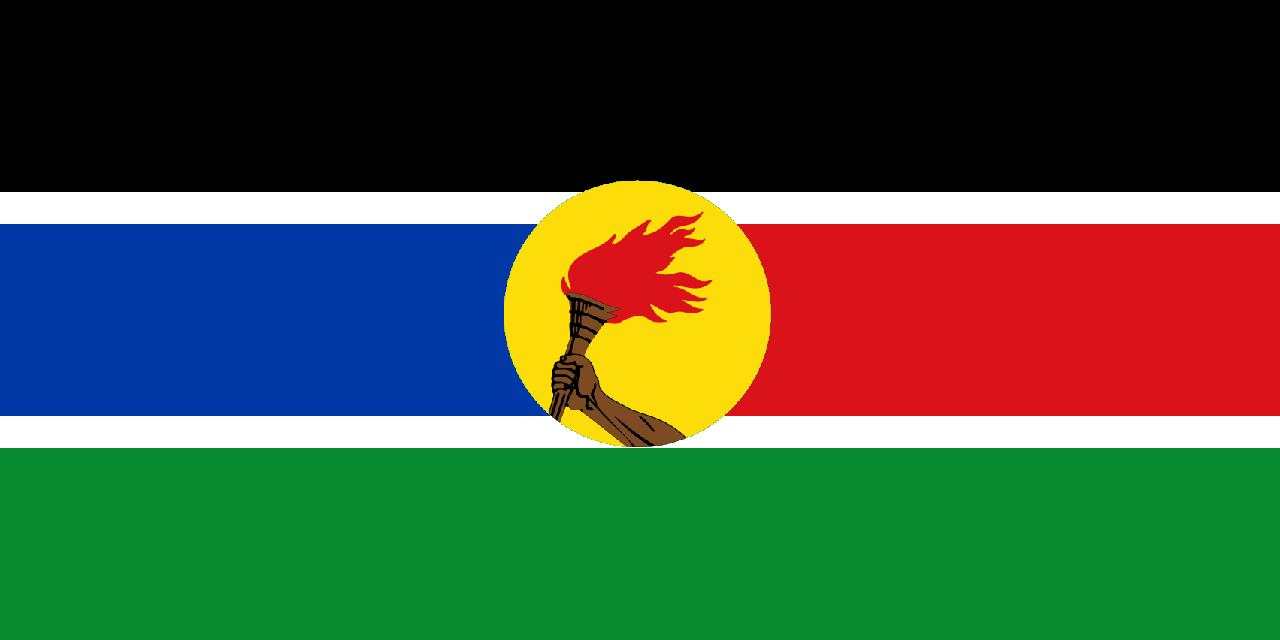 Flag of the Democratic Peoples Republic of South Sudan (Southwest Sudan, naturally). The state is barely recognized (only recognized by the insurgent state of Democratic Peoples Republic of the Congo and the Central African Democratic Peoples Republic), lacking the crucial Chinese recognition that CAPDR managed to get due to the lack of an active *Maoist group in the Former CAR. And acts as a puppet state and base for the Peoples Revolutionary Army of the Congo (the people behind DPRotC, likely the closest analogue for ISIS ittl). With European Council sending troops to Chad and Darfur it is believed that the days of PRAotC and its two puppet states are numbered. (The OTL symbol of Zaire is used by the PRAotC and their puppets) (puppets of the extreme Khmer Rogue/North Korea style terrorists)


Other posts in this thread from the same timeline:

Gokbay said:
View attachment 514111
(thanks to @Marc Pasquin for the flag) Flag of the Federal Republic of Rio de la Plata which was established in 1941 when Britannic Union (combination of Soviet Union and British Empire mostly) and Communist Uruguay defeated Argentina and liberated the recently annexed Paraguay. Afterwards the Uruguayan leader is made president of the union of Argentina, Uruguay and Paraguay. Bolivia was conquered in 1942-1943. The Socialist World joined the Second World War in the Allied side against the French State and Brazil in 1944. Next year Britannic Union bombed Natal and Salvador de Bahia (government had escaped there as Rio was considered too close to the front lines)(first use of nuclear weapons outside of a Britannic test). Brazil was divided with most of Brazil (all of South and Southeast regions, Central West outside of Mato Grosso and most of Bahia) being united with Rio de la Plata to form the Socialist Federative Republic of Sudamerica (Yugoslavia expy).
View attachment 514119
This was the Sudamerican flag during the rule of alt!Tito (the aforementioned Uruguayan leader) until his death and for a few more years until the new Argentine leadership got to changing it. In 1967 Chile joined Sudamerica and the new Argentina leadership decided that was a good excuse to change the flag.
View attachment 514121
This was the flag used by Sudamerica after 1967 and until 1996 when the nation dissolved. (thanks to @trejiokla for the both Sudamerican flags)
View attachment 514124
And finally this was the flag of the Federal Republic of Sudamerica, known as Argentina-Uruguay or Argentina and Uruguay more often (expy of Serbia and Montenegro) that was established in 1996. Uruguay seceded from this union in 2000. Argentina returned to their pre-1941 flag and had to deal with a Patagonian War of Independence (Patagonia is Kosovo equivalent) from 2009 to 2014. Argentina still claims Patagonia (and the Malvinas, thought that claim was on hold from 1941 to 1992 since Sudamerica was partially a client of the Britannic Union).
Click to expand...

Gokbay said:
View attachment 516663
Flag of the International Concord. It is the UN equivalent in the same not-actually-a-timeline/timeline concept as my South American Yugoslavia post here
Click to expand...

Thanks to @FriendlyGhost for providing me with the USSA flag(s, I didn't post the others). Made the ASF flags with the help of the USSA flags. USSA was established in 1945 by the Union of Britannic Syndicalist Commonwealths after the US defeat in WW2 out of US states east of the Mississippi except for New York, New England, Indiana, Illinois, Michigan and Wisconsin (first two annexed by UBSC, others remained with the US remnant). Northwest was later annexed from US in a war and UBSC would later transfer the Bahamas to USSA leading to its last flag having 20 stars for 20 states and 8 stripes for founding colonies. USSA was a nuclear power and part of the Forum of Great Powers and the Forum of Nuclear Armed Nations in the International Concord (alt-UN). While the nation far-left it was home to multi-party elections (with the CPUS(S)A being the government since 1954. Other parties being Socialist Party, Socialist Labor Party and Socialist Workers Party. With the last election in 1994 being CPUSSA vs an alliance of democratic (capitalist) reformists). In 1995 the nation was reformed into the American Socialist Federation (with different subdivisions than the former states), a less democratic and oppressive country. There was 11 of these subdivisions and such the new flag had 11 stripes and 11 stars. The emblem of CPUS(S)A added to the flag (the party itself was renamed to Communist Party of America). In 2017 the Bahamas were given to the restored United Kingdom of Great Britain and the number of stripes and stars were dropped. Modern ASF is the only socialist nation truly free of Chinese Social Republic influence. It has very recently been warming up towards capitalist powers and even becoming more open towards USA and Canada. The nation has finally begun (economically and socially) recovering from the fall of the communist bloc in the 90s. USSA and ASF are both also (semi-)commonly known as East America (as opposed to USA's West America).
Click to expand... 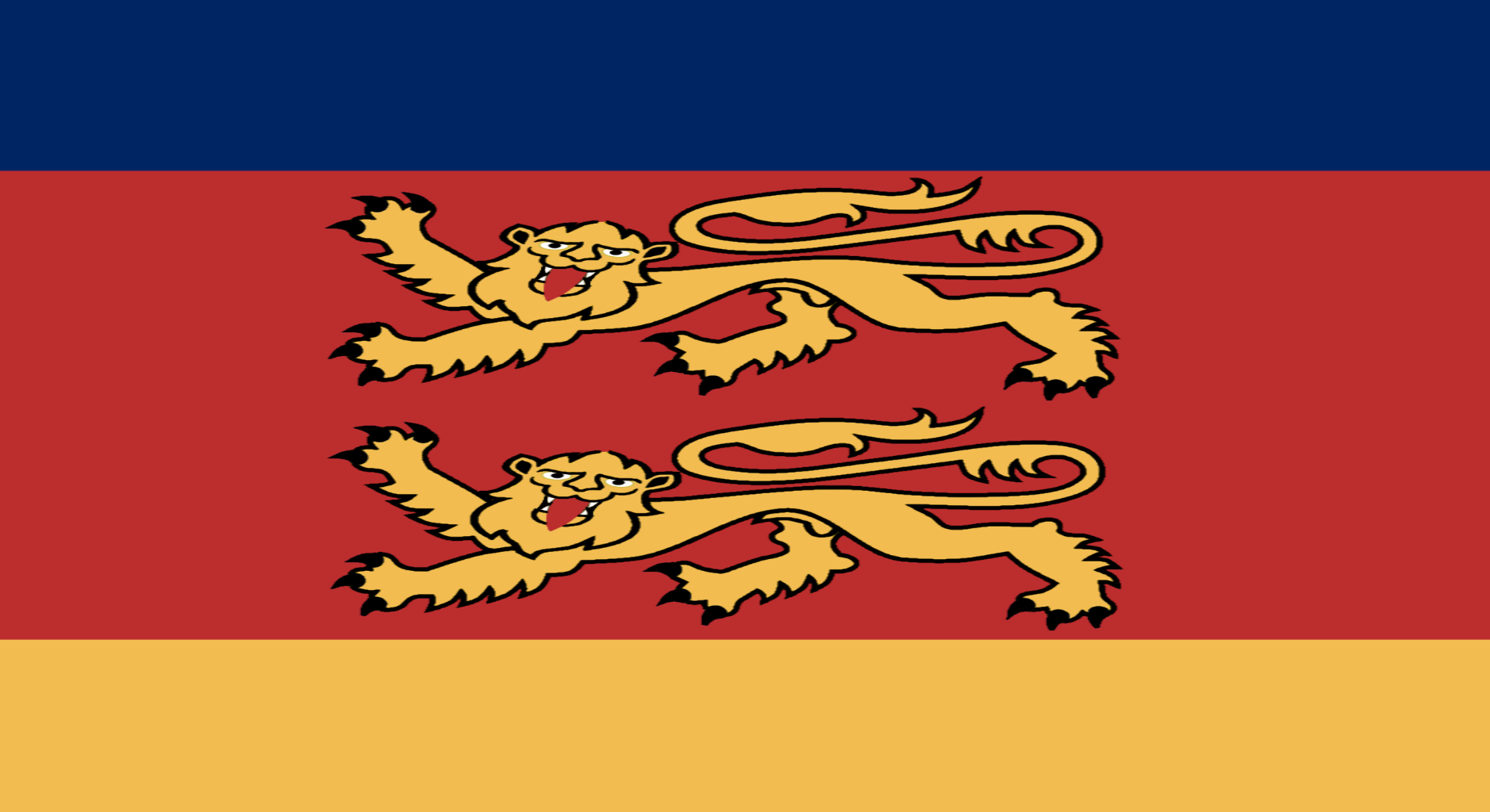 A flag for a democratic Germany based on the wish of German Liberals and the Urburschenschaft during and after the Napoleonic war, the flag itself is based of the The fraternity's 1816 black-red-golden flag with a oak leafs and a acorns, which are together with black, red and gold some of the many German national symbols. 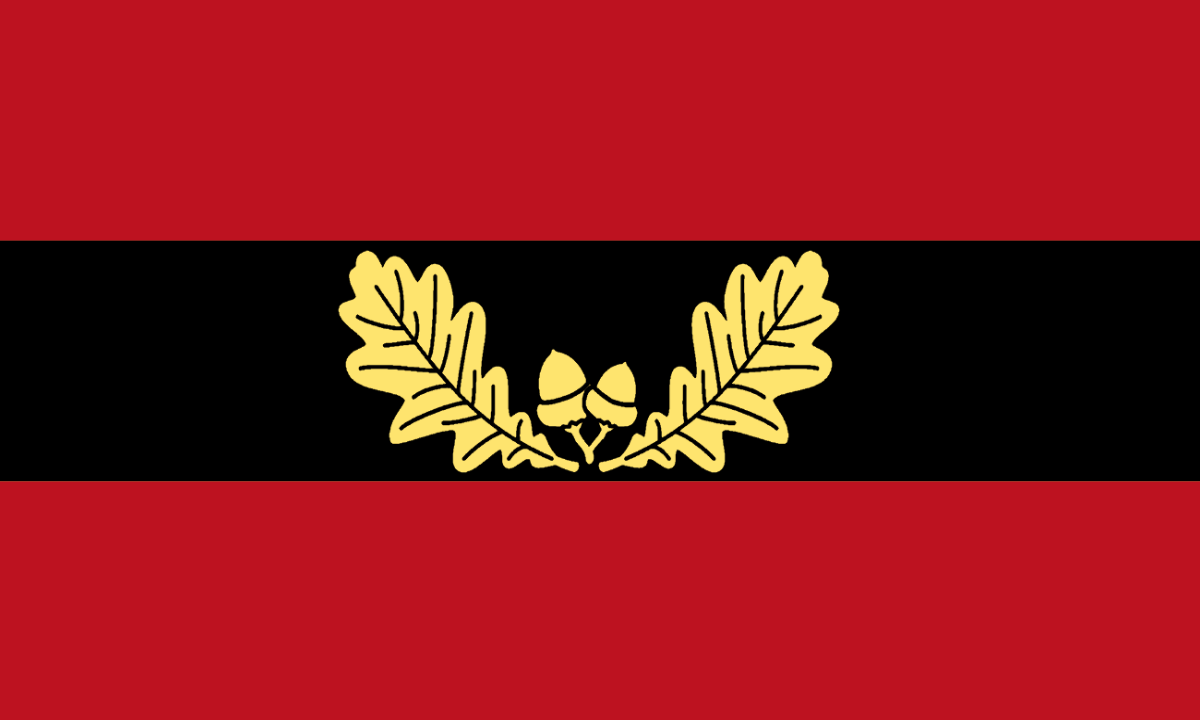 A few nights ago, I dreamt that I was looking at an extremely pixelated map of some sort of Soviet rump state in Central Asia. While I couldn't tell anything from the map, I actually got to see the country's flag, which was interesting, but it only raises further questions...

Falkanner said:
A few nights ago, I dreamt that I was looking at an extremely pixelated map of some sort of Soviet rump state in Central Asia. While I couldn't tell anything from the map, I actually got to see the country's flag, which was interesting, but it only raises further questions...

Now I'm trying to figure out how this could exist and be a Soviet rump-state at the same time.

Coptic Egypt tricolor. Red for "red earth". Black for the black earth around the Nile that gives the nation its name Kemet.

Lothal said:
View attachment 533228
Coptic Egypt tricolor. Red for "red earth". Black for the black earth around the Nile that gives the nation its name Kemet.
Click to expand...

This is cool. I will most likely use it in my scenarios 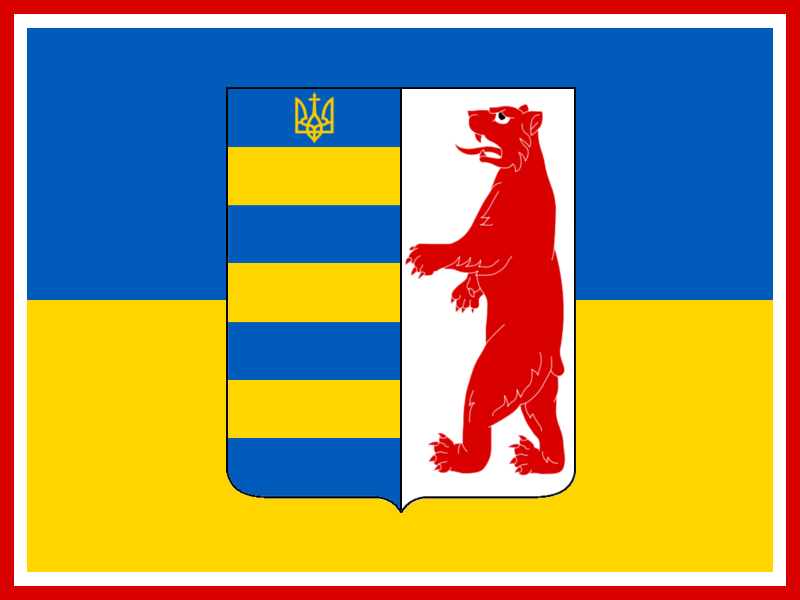 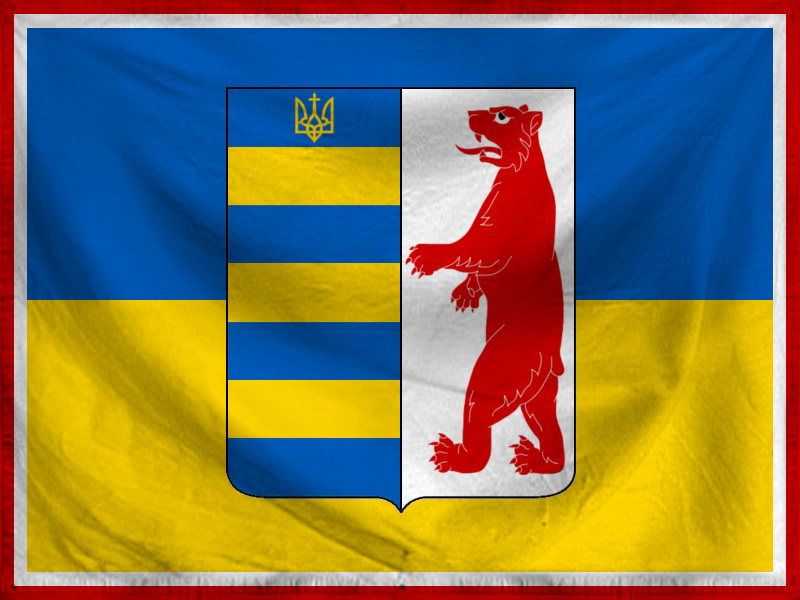 A blast from the past. Reposting the flag of the Transcarpathian Republic from my Sparrow Avengers setting. Ordinary and textured. 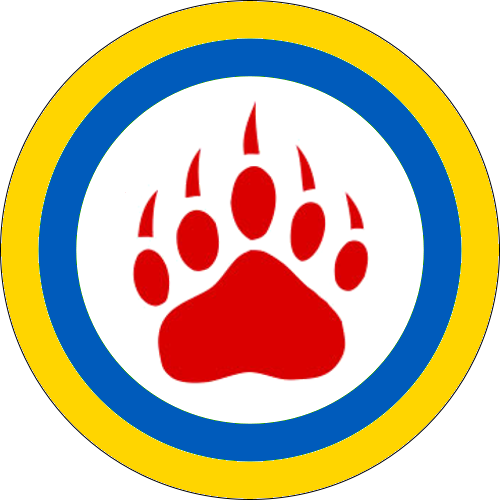 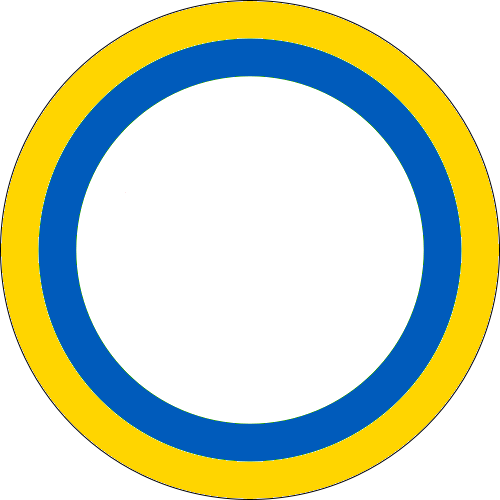 Low-visibility version (needs some artefact removal, but I'll do it in short order).

Awhile back, I uploaded a purple/black bicolor. Another member stated that it looked like a fascist post-WW1 Austria. So randomly I remembered that and made this.

Last edited: Thursday at 11:27 PM
You must log in or register to reply here.
Top
Top