So i've been playing Fallout lately and naturally whever i would take a break from playing i would watch Fallout themed videos on Youtube. I found a video about what happened to Europe and Asia in the game's universe ( which if you're not familiar with you can read about here ). The video came to no conclusion but it did mention that the US and USSR were neutral or perhaps even allied at the time of the war.

The Fallout universe doesn't have a clear split date, more of an ambigous shift some time in the 1950's. The clearest common even we know of is World War 2 which ended in 1945 as in OTL. There are certain important events that took place before 1945 that didn't happen in our timeline and vice versa , but unless you're a hardcore butterfly effect fan you can probably agree they wouldn've changed history that much ( it's mostly about fictional companies so that the game devs wouldn't have to explain why your favorite brand of soda isn't in game)

A few key things play into my theory.

First the US and USSR are not hostile at the outbrink of the Great War.
The European Commowealth exists, which is supposed to be a consolidated version of OTL EU
There are a few mentions of a Vietnam conflict.
The US does not get involved in the European-Middle Eastern war of 2052.
Mr. House is not an Enclave member.

My guess is that the Enclave, the shadow goverment of the US at the time of the nuclear war, was actually in control for longer that it is known for certain within the series. My other guess is that NATO never formed, and the rivalry between the US and the USSR was delayed if it even took place. It couldn't be that Stalinism never formed, since until 1945 the timelines are mostly a perfect match, so it could be that the interests of the Enclave were an alliance with the USSR or at least good relations.

This does make sense in the 2050s, since the USSR would have plenty of access to natural resorces it would be a vital trade partner, but not in the 1950s ... but it kinda does if you think like Mr. House does. He predicted that a nuclear war was unavoidable a decade prior and managed his own resources to ensure his own survival, much like the Enclave but on a smaller scale. The Enclave is supposed to be formed of the most important people. Surely the CEO of the most important robotics corporations is expected to be part of. Maybe he was part of the Enclave and left before the war. Maybe that's how he came to the conclusion that the nuclear war was unavoidable. It could be he was informed of it, or maybe it was a secret he stumbled upon. Anyway the behaviours seem to match. Both parties sought to preserve themselves in order to rebuild the world based on their ideologies. It could be that the moment the US used nuclear weapons the Enclave had already antcipated what it would lead to and much like Mr. House it wouldn't be interesed in avoiding it, but preparing to take the hit and rapidly rebuild.

Now that's fun but what does it have to do with China and the Cold War? Well it is possible that the Cold War happened later, after China became a superpower. It is known that much like OTL's Sino-Soviet Split, the Soviets were at least uninterested in Chinese affairs. Simmilarly the US doesn't get involved in Europe's war. And the United Nations crumble during the Resource wars. It could be that there were more political blocs in play that in OTL. Perhaps a US-USSR, and Chinese Bloc, a European Bloc and a non alligned one? A US that is only interested in its affairs with few "allies" would make for a very unstable world and would explain the events we see, is what i think. With no interest in either Eastern or Western Europe, but the USSR, the US wouldn't proceed with the Marshall Plan, the Bretton Woods Agreement and IMF, (which yeah it's 1944, but it became active after the war). This could be the reason at least Western Europe unified. It is also possible that this meant a delayed, if ever present decolonization, as Europe would be more interested in clinging to its resources. Which might explain why a war in Vietnam takes place. It's possible that as China became a power on the globe it would seek to extend its sphere of influence in Vietnam by supporting a communist coup. Which caused a poxy war involving the US. Even under a communist regime the USSR wouldn't be intersted in expanding its sphere if the US didn't, which would be a shock for the US when the Chinese did it. This would prompt immediate intervention as to prevent tipping the balace of power, and basically explains the atmosphere of the 1950s still present in America. It's also noteworthy how little anti-soviet propaganda exists compared to anti-chinese within the Fallout universe. In OTL the Cold War evolved culturally decade to decade, so the idea that the Fallout Cold War remained the same for more than 100 years, is implausible. A delay of a few decades would fit, as it would explain why pacifist trends present in our timeline within just 2 decades are missing. It might also explain why transistors were invented so late, but robotics and microfission are even present at all, as the Enclave would seek to steer the technological progress of the US to ensure their survival, kinda like they did with Vaults in the first place. And why the US wasn't interesed in the Middle-East (which is really ironic compared to OTL) as with the USSR as its partner (oh and Mexico annexed) they thought they had enough to survive.

Ultimately this is just fanboi theory but it was fun think about it so maybe it was fun for you to read, if not here's a funny maymay for you instead 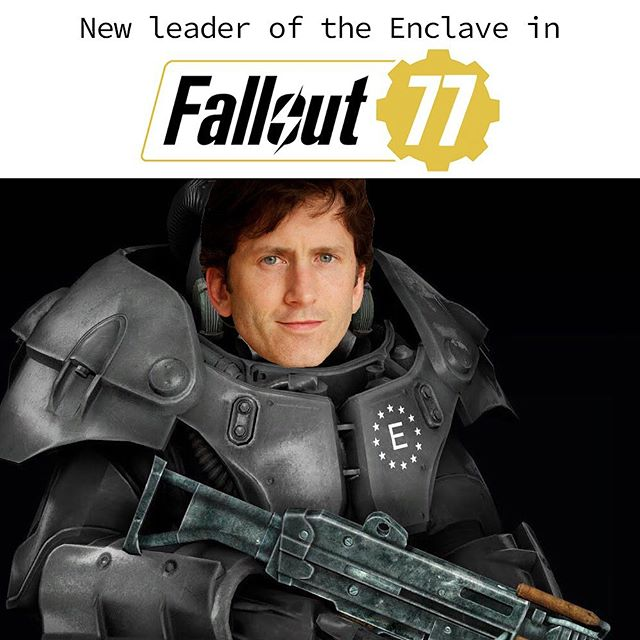 Very interesting...
You must log in or register to reply here.
Top
Top