As a venenetophile, Sicilophile and italophile I've long had complicated feelings on the Eastern roman empire in paradox games. More often tham not I enjoy restoring the west to glory from an italian power, be it Milan, Venice, or Naples.

I've decided to play a modded game as England. Started off well, won the Hundred Years War but decided to take some cash and some territory. (I might as well be playing on easy mode if I took the PU) 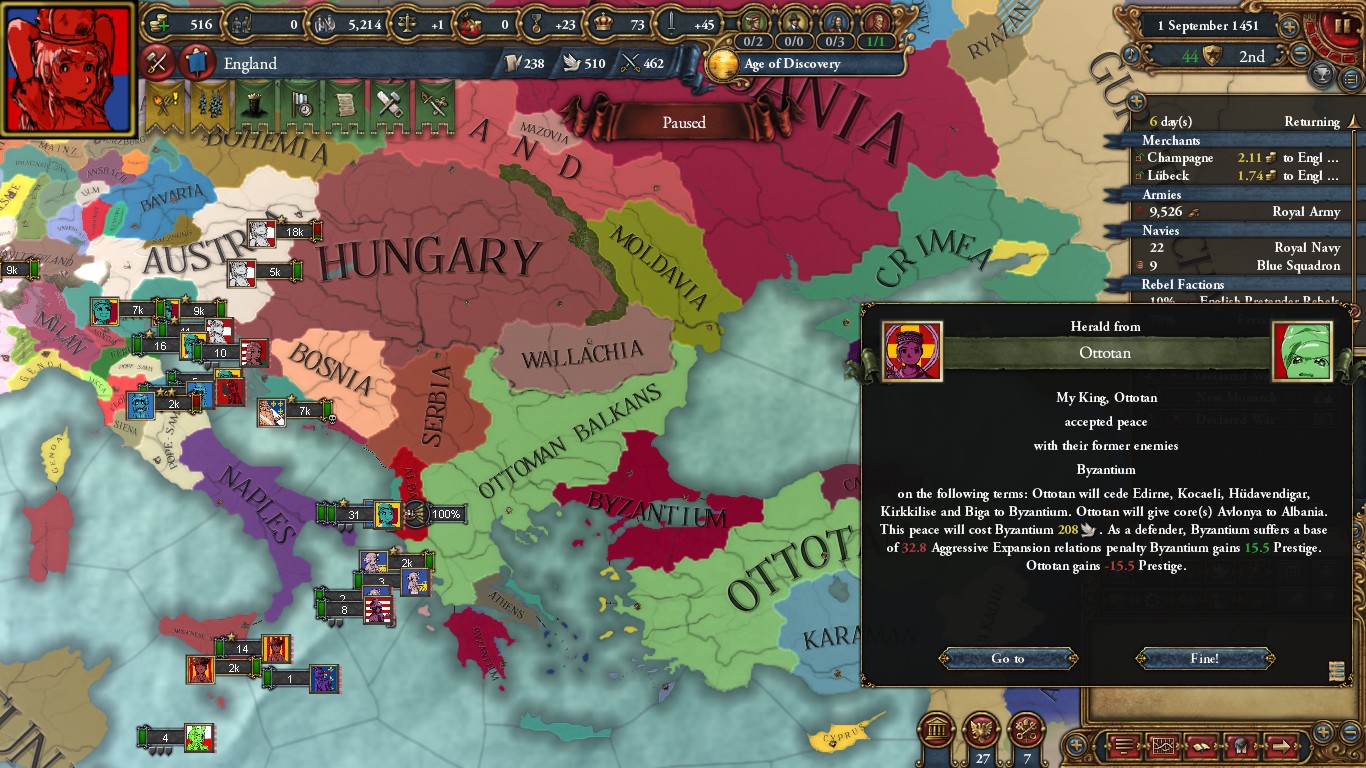 Hurray for Byzantium! The Purple Phoenix shall rise to conquer all of Eu- 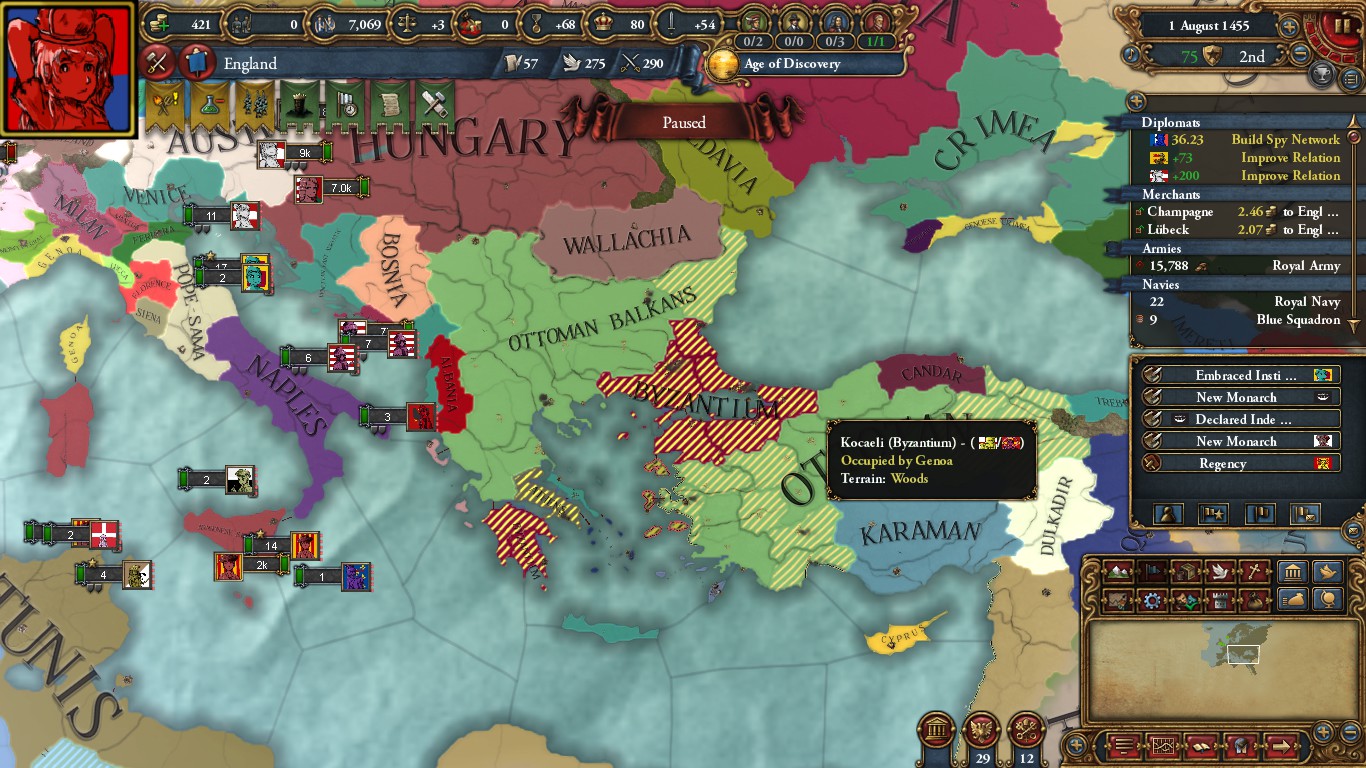 Also: Shit, I forgot to check my aggressive expansion. 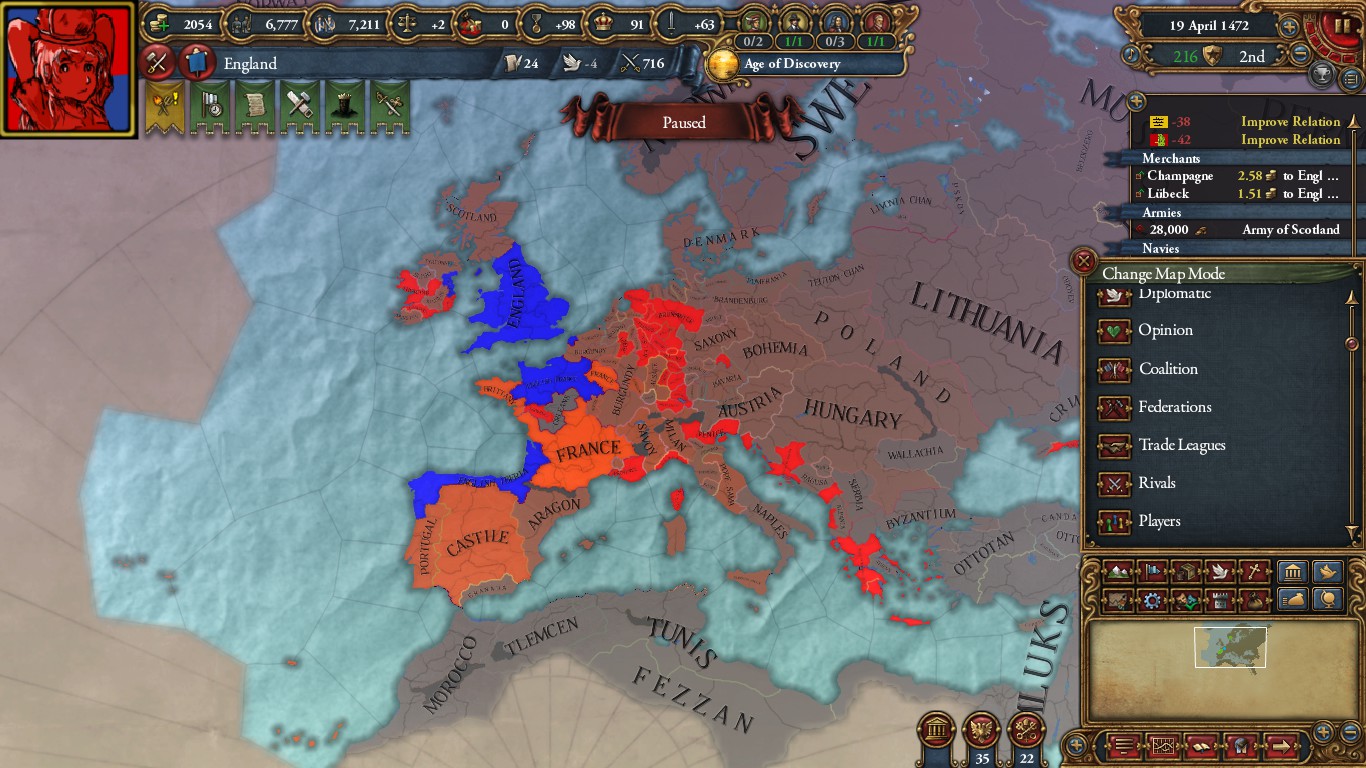 So I started a milan->Italy->Roman Empire campiagn, no pics but its 1550 and I have most of the North under my control (only savoy, shielded by our mutual ally France the southern half of sardinia, naples, Mal5a, Venice and friuli under a breakaway Styria blob remain). Had a bit of a rough start, what with hungary allying all the italian minors and venice proving surprisingly obstinate despite being at war with the turks. But despite sitting at 50+ we I've yet to trigger a single coalition yet, mainly because I've been backstabbing my allies (first Ferrara then Florence, then austtia, then castille, now styria) and juggling truces. Ironman vanilla is not the best way to play but it is memorable.

I will note that manpower is a perpetual problem as gold is inversely not at all-i've been constantly sitting at between 0 and 5000 manpower in the bank while routinely having between 500 and 1000 raw cash from war reps and raw trade income (having less than half my 50 something forcelimit with a United northern Italy also helps.) I'll post pics tomorrow as Im on my phone and not wholly sober right now.

Brief update on my Denmark Game: a German State I was Allied with just Defeated another German State in War, only for the Defeated State to be Annexed by a Third Party, so that's Blown my Chances of Two Extra Provinces when I try to Annex my German Vassals.

I've also Researched Technology to build a Church, which is good news, as I Really need to get that Money Rolling in. Also Sweden has a Liberty Desire well over 50% but it Appears to be hovering around 63% when I left and I'm not sure if that's a good thing or a bad thing.

While my Dynasty is safe in the Form of 7-Year-old Prince Eric, I am Curious to Know who is Eric's Mother as there seems to be no Name for King Christopher's Queen. Is it Possible to find out this Information somehow?

It's bad for 2 reasons if it's 50% or higher you can't annex it and other states can support it if it declares independence. I have seen Sweden usually get support from England ,Russia, Poland,or Lithuania and sometimes more then one of them at the same time.

Weeeeeee, i just finished a full game up until 1821. In America the situation is like this:
Ming holds a part of Alaska and the western seaboard down to around Vancouver. France holds a piece of Florida and Lousianna. The rest is British colonies
In Central America British Mexico rules
In South America there is French Peru(they grabbed a piece of Aztecs when i was not looking) and the Dutch hold half of Brazil and Guniea plus the Eastern islands in the Indies, the rest is British colonies

I have the continent of Australia, France sneaked by and took New Zeeland. In Indonesia most is mine, but islands are divided between GB, France, Castille and the Netherlands.

Nice game even though i did not quite understand the rules of trade etc.

Third navy(France and Japan have a few ships more since i recently fought a war), third largest army, third largest in provinces and third in development. Highest income and trade income. I supplied Russia with 10 000 credits at least during the game.

Austria is not bigger than what it is currently. Super-Milan rules instead


Man, I hate the reformation.

Banned
I am playing as Eithiopia right now.

I have just conquered Jerusalem.

I look for any opportunity I can get to get force conversion in a peace deal for any country with a capital as a centre of reformation. You can normally kill 2 of the three protestant ones with that, and 1 or 2 reformed. It really slows down its spread and adoption especially if you get on it quickly to OPMs. 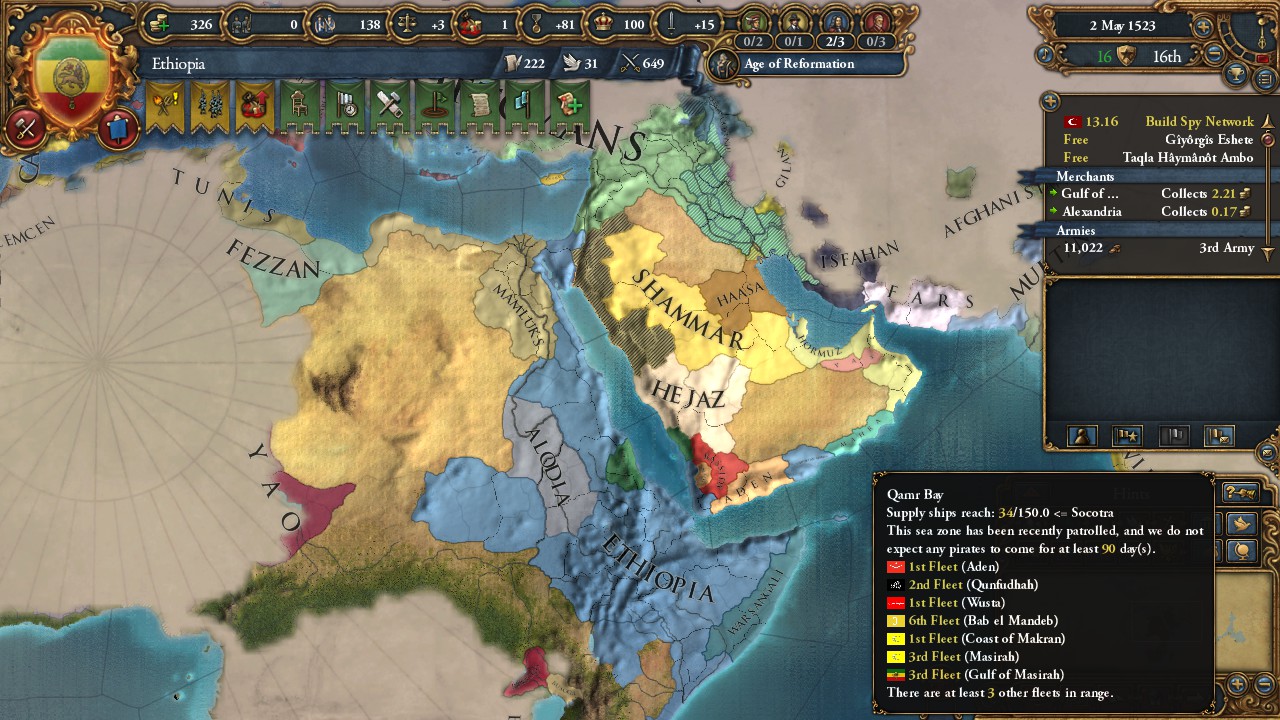 I think this is a pretty good position.

I should probably add that Alodia and Heri Bahri (the dark green state by OTL Eritrea) are in personal union with me. My aggressive expansion is a bit high in the Middle East right now though, and I am nowhere near strong enough to face the Ottomans (they have a 95k army... and my cap is 37k) so I think I am going to spend the rest of this century going south and taking all those Zimbabwean gold mines and Madagascar.

Wish there was a better way to bulk up without having the longest empire end-to-end by far. I'm at the point where marching my armies from Darfur to the front by Mombasa takes a good three to five months. I really am going to need my navy to move things around.

Yeah, the Ottos are a problem pretty much no matter who you play as.

Well, my spectacular plan to defend against the Ottomans by landing an army in their rear by sea resulted in me losing 2/3rds my troops with them not suffering a scratch. I now have 80K forces marching into my territory and nothing to stop them.

This stupid game. I have the Ark of the Covenant, why can’t I go Indiana Jones on them?!


Time to try playing as another country... 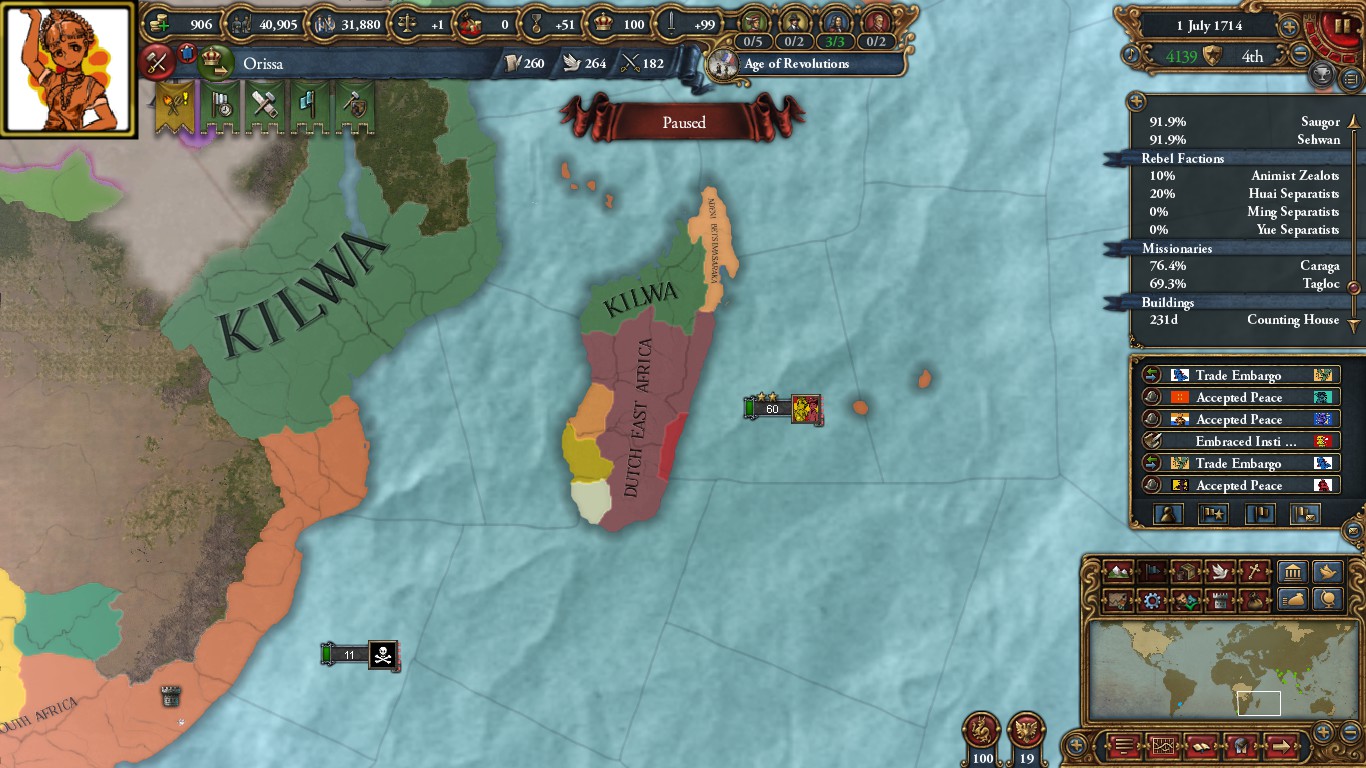 Seriously though, these Charter Companies are getting out of hand.

Just started playing as Brabant. I'm gunning to steal away the Burgundian Inheritance from Castile/France/Austria. What's the strategy?

And also, what Idea Groups should I get?

And also, what Idea Groups should I get?
Click to expand...

The only way to get the inheritance is to be france for the western portion and for the eastern portion be HRE (most likely by a large margin) Castile/Spain (next most likley) or have a royal marriage (least likely). It's a very luck based event. So the only strat I can give you is try and be HRE, since no way can small Brabant destroy France in time to prevent them from getting the western half of Burgundy when the event fires.

Evilprodigy said:
The only way to get the inheritance is to be france for the western portion and for the eastern portion be HRE (most likely by a large margin) Castile/Spain (next most likley) or have a royal marriage (least likely). It's a very luck based event. So the only strat I can give you is try and be HRE, since no way can small Brabant destroy France in time to prevent them from getting the western half of Burgundy when the event fires.
Click to expand...

Austria & Castile usually gets the inheritance in my several reloads.

So, should I just get Burgundian territory in my independence war?

So, should I just get Burgundian territory in my independence war?
Click to expand...

Pretty much yeah, though Aggressive Expansion modifiers in the HRE are doubled so it's going to be slow going.

The alternative is try and be a loyal vassal for a time so Burgundy doesn't get inherited. The event will mostly trigger when Burgundy is badly losing wars, though it can also happen while at peace if Burgundy is unstable. But after 1500 the event will not fire at all. If you go to war with Burgundy you may inadvertently trigger the event before you even take territory from them, and even if you don't a weaker Burgundy is more likely to get involved in wars that will go poorly for it against France, the HRE, and England.

I'd recommend trying to form allies with your fellow personal union partners within the Burgundian Realm so that you all become independent at once. That way regardless of if you trigger the event none of those countries will become part of the HRE Inheritance since during the war they are technically independent. Try to take whatever land from Burgundy you reasonably can as well, but keep in mind where French claims are so you don't end up getting eaten by the Blue Blob.

And also, what Idea Groups should I get?
Click to expand...

If you want the inheritance, you need royal marriage and to have 4 provinces. Emperor I think may be more provinces. Which means you need to get good relations with Burgundy to get a RM, after you kick their ass, declare independence and take provinces. Try to grab them off the PU partners, which it doesn't have cores on. Don't let them go independent. That is land you wouldn't be inheriting.

Allying Burgundy may be a bad idea. They have a habit of getting smacked down hard in stupid wars, largely because the AI is bad at realising the Emperor can call in allies. So try just a RM.

Thanks for the advice, guys.

How about alliances? Is it better to ally France, or Austria?
You must log in or register to reply here.
Top
Top