Years when presidential elections are held 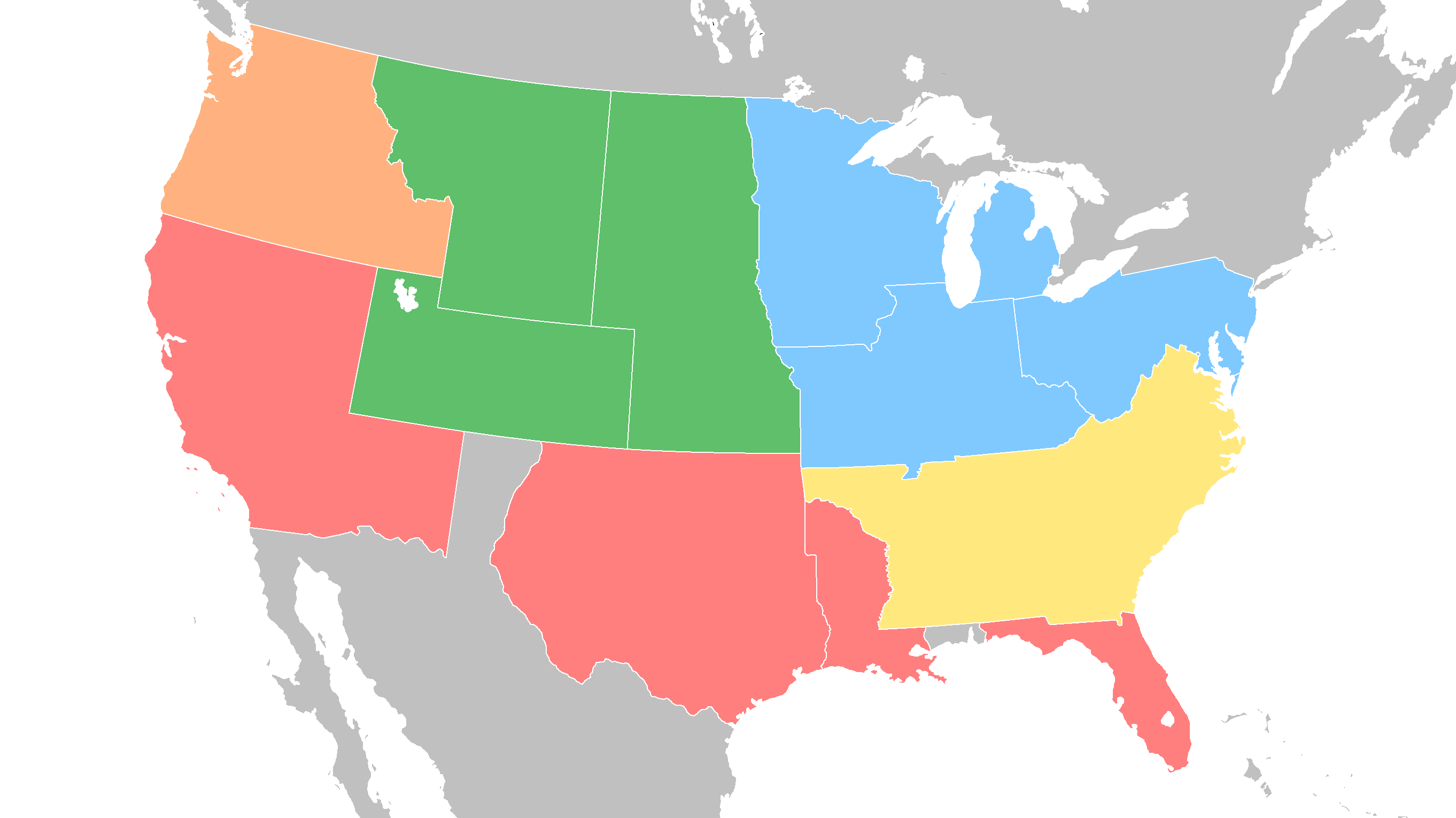 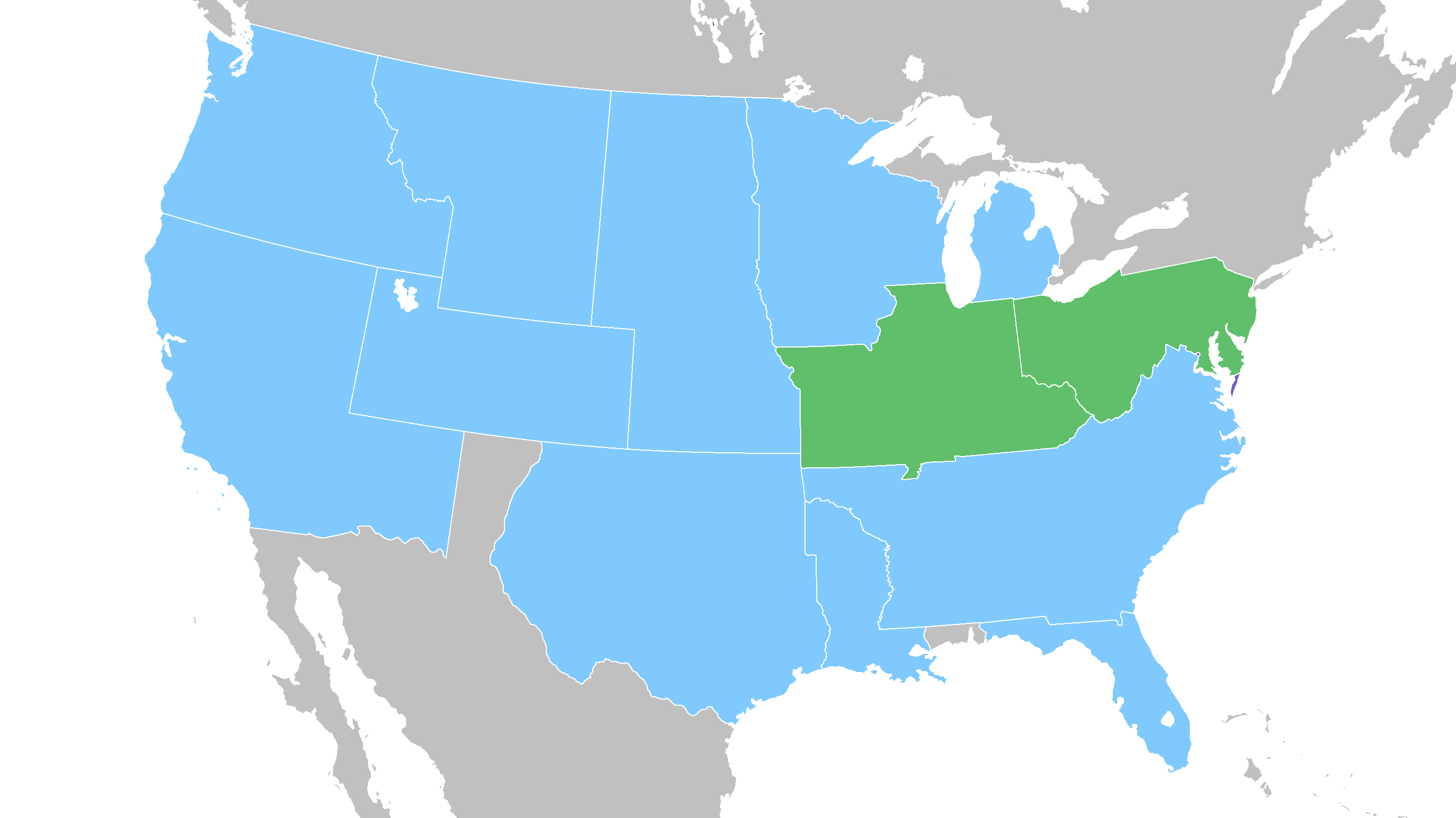 There are three major ideologies when it comes to the American States, Unionism, Nationalism, and Independence.
Unionists want to eventually reunite the breakaway American States to reform the United States of America, most Unionist parties are on the left of the political spectrum.
Nationalists want to maintain independence and focus on domestic problems rather than to attempt to reform the United States, most Nationalist parties are on the right of the political spectrum.
As for the Independents, they believe their country is best as independent and don't advocate for the reformation of the United States but are not against the possibility of it in the future. They state politicals aren't largely focussed on reformation, rather on more important domestic problems. Independent parties don't belong to either side of the political spectrum.
Last edited: Oct 23, 2020
The Seattle Times: 23/10/20

The 2020 Federated States presidential election was held on November 3, 2020, to elect the president of the Federated States. The Federated government had been in exile in Washington D.C. since the end of the Third American Civil War in 2019. Incumbent Democratic president Sally Q. Yates was defeated by Independent politician Susan Rice.

With the defeat of the Federated States against the Dixie Rebellion in the Third American Civil War, the Federated government was in exile in the capital of Washington D.C. after the Dixites failed to capture the city and the ending of hostilities after the signing of the Alexandria Ceasefire. With the Federated government still maintaining governance over the Delmarva peninsula. Mass-homelessness became a major subject during the campaign as the city's population nearly doubled to a million people due to the mass refuge crisis after many fleed Dixie.

Rice was blocked by the Democratic party's establishment to enter the primary, due to the party backing Yates for the nomination and presidency. Yates' willingness to postpone the election by 2 years in 2018 caused many to believe she was grasping onto power. Rice was able to get onto the ballot by getting enough signatures in order to qualify.

Both candidates hoped to gain the massive Virginian vote, due to 70% of refugees beings from that state. Rice selected Secretary of State Tim Kaine, while Yates chose Mayor Kerry Donley of Alexandria.

Rice would go on to be elected the next president, getting a majority of the overall vote and that of the African-American community. Rice would become the first African-American and fourth woman to become president of the United States and/or the Federated States.
2020 Great Lakes presidential election 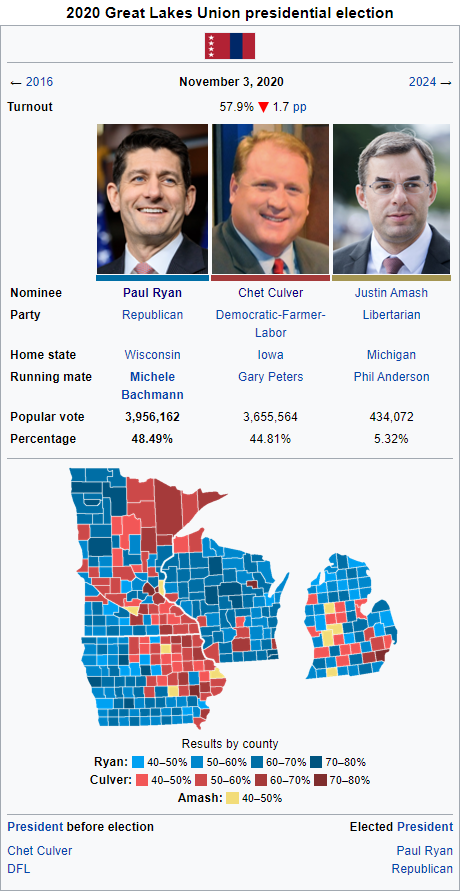 The 2020 Great Lakes presidential election was held on November 3, 2020, to elect the president of the Great Lakes Union. The incumbent president, Chet Culver, of the Democratic-Farmer-Labor Party (DFL) was defeated by Speaker of the House Paul Ryan.

Culver, as vice president, became president after the resignation of President Al Franken in 2018, due to allegations of sexual abuse/harassment while as a senator. After being Impeached by the Republican majority House, possible removal in the Senate, and pressure from the party establishment, Franken announced his resignation on March 2, 2018.

The surpise rise of Libertarianism in the counrty caused Paul Ryan, the Republican nominee, to chose Liberatarian-Republican Michelle Bachmann to gain the Liberatarian vote from Justin Amash. Culver and the DFL had fallen in popularity adn party fatigue sine having controlled the presidency sine the countrys indpedence in 2006. Culver attempted to appeal to rural, farmer voters. But a stagnating economy throughout Culvers term pull those voters towards the Republicans.

Paul Ryan would go on to be elected the next President of the Great Lakes Union, with Bachmann becoming the first female vice president.
2020 American Union presidential election

The 2020 American Union presidential election was held on November 3, 2020. Interim President Donald Trump was able to defeat National American nominee Joe Biden. Trump will be the first full-term president of the American Union since it gained independence from Canada on July 4 of the same year.

After the American Union gained independence from Canada after a referendum was held in 2016, the Incorporated American States didn't achieve independence for nearly 4 years after the vote. Being the leader of the Patriotic American party, Donald Trump became the Interim President until elections were held in November.

The American Union under President Trump sought trade agreements with both the Midwestern Union and the Dixie Confederacy, the trade talks with Dixie being criticized by the media and Nationals as supporting a racist and authoritarian country. Trump defended his actions as a means to support the economy and expand trade while the country was in a recession. The Patriots accused Biden of being "unpatriotic" after they formed a coalition government with the Progressives whilst the Union was still a part of Canada. Claiming Biden was a "socialist" and "communist". Biden stated, "I worked with PM Sanders to achieve our goals of independence once and for all. We were sadly not fully successful due to the fact that our new America lacks strong standing allies and trade partners due to Trumps' unwillingness to cooperate during negotiations."

Vice President John Kasich declined to be Trump's running mate, believing that, "his anti-immigrant, racist, and authoritarian language is the wrong direction for the successor state to the United States." Kasich would endorse Biden as a result.

An "October surprise" occurred after the murder of Franklin Johnson to a Pittsburg police officer on October 19, sparking nation-wide protests calling for police reform. Trump supported the police whilst the protests turned into violence after he sent in federal troops in the major cities. Biden stressed the importance of police accountability and reform, whilst forgoing defunding the police.

Many votes were against Biden for being seen as an establishment politician and for his coalition government with the Progressives in Canada, causing low poll numbers leading into the campaign. But after the Johnson killing, public support, especially in the Black community, dramatically went to Biden. The race then became close and the polls believed it to be a toss-up.

Once the results came in, it was believed that Biden had won by a margin of fewer than 10,000 votes. But as mail-in-ballots, most believed to be from elderly people unable to vote on election day, pulled the vote back for Trump. On Saturday, November 7, Joe Biden conceded the race to Donald Trump.
Last edited: Nov 10, 2020
2020 Bolivian general election New

The 2020 Bolivian general election was held on 10 November 2020. Evo Morales defeated incumbent president Carlos Mesa after previously running in the past 2 elections. Having barely gained enough votes to avoid a runoff, Protests and demonstrations have occurred throughout the country. Morales is set to be sworn in as president on 5 December.

The Mesa presidency had been seen as corrupt and authoritative, Morales and his Socialist Movement had existed for decades, but anti-socialist/communist sentiment in the country failed to appeal to many. After the economic fallout of the Second Great Depression, socialism in the country began to gain appeal. After two terms of Carlos Mesa starting after the 2010 election, public outrage over the continued economic stagnation caused many to support Morales.

Socialist and anti-Mesa parties united formed an alliance against those of Pro-Mesa, Conservative, and establishment liberal parties. After the results were announced, Morales' and Mesa's supporters began to flood the streets. Street fights and demonstrations occurred around the country, with Mesa sending in the military to deal with the situation.
Last edited: Friday at 9:21 PM
The Second Soviet Union, 2020 New 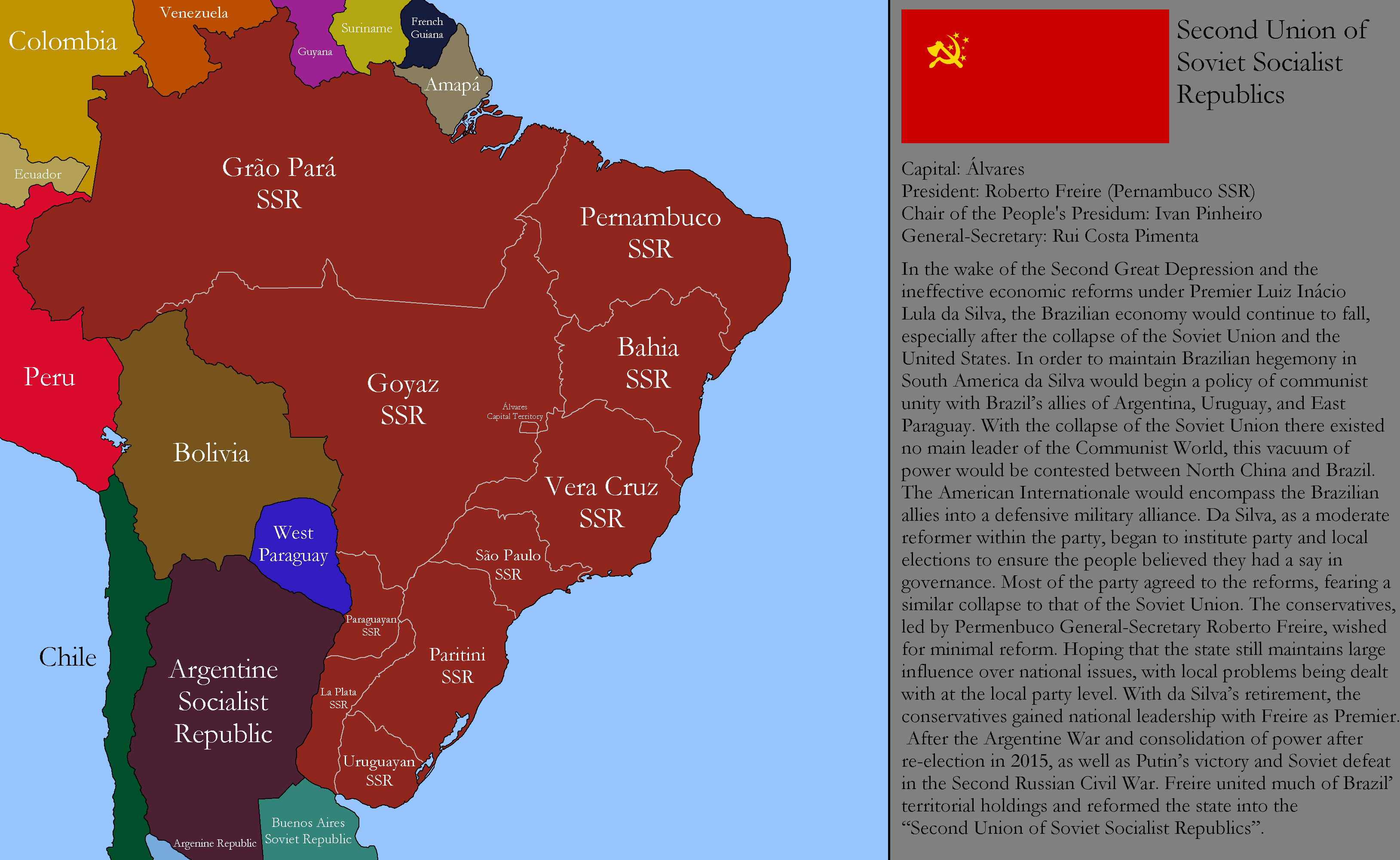 The Bolivian Military under General Carlos Orellana Centellas overthrows President Mesa and installs himself as Interim President to prevent Morales from being inaugurated. Morales is able to go to the western mountain regions and begins a guerrilla campaign against Centellas. The Second Soviet Union begins to assist the Morales guerrilla fighters, beginning the Bolivian Emergency. The National Government under President Mesa still has support and control over the western departments, although divisions between the parties and political leaders endanger the unity of the government.
Threadmarks
Reader mode
You must log in or register to reply here.
Top
Share:
Share
Top