Two warship designs that feature in Drake's Drum. They were designed in our time line but never built. Top: HMS Lion, lead ship of a class of five battleships armed with 9 X 16 inch guns. In OTL four were planned and two were laid down, but wartime shortages and changes in priorities meant neither were ever launched. In Drake's Drum, five are commissioned. Bottom: two designs for heavy cruisers were prepared by the RN in 1938/39. The second was a 15,500 ton ship with 9 X 8 inch guns. None were ever laid down. In the Drake's Drum timeline four are completed and two more cancelled.

I'm very happy to announce that the second book of the Drake's Drum Trilogy is now available.​ 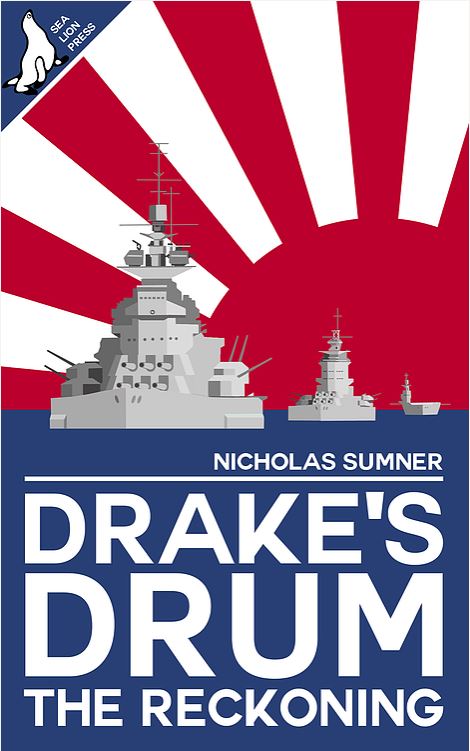 Four British aircraft carriers; Fearless, Intrepid, Furious and Courageous, underwent comprehensive reconstructions to become armoured carriers. Near contemporaries of the Illustrious class, to which the reconstructions bore a strong resemblance, the decision to rebuild them was essentially political. The government of the day were pursuing an interventionist economic policy designed to create jobs and while building new carriers would have cost as much as the reconstructions they would not have employed so many people...

Mad as this idea might sound, it was actually seriously considered in our time line. This Photoshopped image is my interpretation of how Furious and Courageous might have turned out. They will be making an appearance in Drake’s Drum. If anyone is interested, here is a link to the Drake’s Drum website where you can read an extract from the first book, browse the appendices (which include a paper on the Royal Naval Air Arm, this timelines bigger, badder, FAA) or read a short story that relates directly to how and why a crazy idea like this actually might have got the go-ahead.

The USN Appendix is now up at the Drake’s Drum website.

The images below are Photoshopped

Top: BB72 USS Wyoming, a battleship from the Drake’s Drum timeline. Based on the BB65 Montana design, she was commissioned in early 1947, shipped nine 18 inch guns and had a modified superstructure and secondary armament layout. Originally to be one of a class of eight ships, only three were eventually completed.

Below: CV 13 USS Franklin, an Essex class carrier, lies alongside CV19 USS Independence. Lead ship of her class, Independence commissioned towards the end of 1946 and was based on the CV-B design of 1941.


(Of course, if you though it was a bag of pants, I'd be grateful if you didn't post a review...)

I'm ordering them when I get paid

The Kreigsmarine Appendix is now up at the Drake’s Drum website.

What if the French fleet had fallen into German hands? What if that fleet was much more powerful than that of our time, because the talks to establish the London Naval Treaty had collapsed in 1934?

This is the battleship Moltke, from the Drake’s Drum timeline. Built by the Marine National, she was running trials in June 1940 and was surrendered to the Kreigsmarine as part of the terms of the French capitulation. In design terms she is based on OTL projects; the French Type 2 and Type 3 design studies of 1939-40. There are two crucial differences from these studies. Firstly, the failure of the London Naval Conference means that the naval arms race has started early, so Moltke and her sister ship Blucher are laid down in 1934 and 1935 respectively. Secondly, instead of the twelve 15 inch guns planned in OTL, she ships nine 16.5 inch guns. In Drake's Drum she and her sister undergo reconstructions to help them conform to Kreigsmarine procedures and make them look more German.

In OTL, to follow the Kreuzer M design, K-amt (the Kreigsmarine's design office) produced four designs known as Seeadler, Wehr Dich, Trotz Alledem and Motor Kreuzer. Although originally rejected for having only two shafts and being too large, if the Motor Kreuzer design had been built in the Drake’s Drum timeline, she might have looked like this.

What if the last battleship built by the Royal Navy was designed to carry nine 18 inch guns?

This is the battleship Dreadnought, from the Drake’s Drum timeline. With the war at sea raging and its outcome in doubt; she is seen here on her way to the Far East in early 1948. In OTL the British investigated designs for very large battleships. For instance, the 1944 design ‘D’ would have had a standard displacement of 62,700 tons, but the design presented here is based on a different ship; the OTL K3 design of 1921, with machinery, armament and equipment suitable to a battleship designed in 1941.

What if the Chilean battleship Almirante Lattore had not become HMS Eagle? What if the Royal Navy had built a pair of aircraft carriers on the hull of incomplete Hood class battle cruisers instead??


This is the carrier Fearless from the Drake’s Drum timeline. Commissioned in 1925, she and her sister ship Intrepid, helped open the Royal Navy’s eyes to the tactical possibilities offered by using groups of fast carriers in conjunction with other units of the fleet.

reading your book right now, and just got to the part with philby - that is sure to raise some butterflies!

Just read your most recent book I have to say the RN showed that the walls of the kingdom are the steel hulls of their ships.

Out of curiosity with british armour will the centurion be appearing earlier in TTL.

A Merry Christmas, a Happy Hanukah, I’m not sure what all the others are, but whatever your special holiday is; I hope you enjoy it and I wish you well.

If you’re bored over the break you could check out the Drake’s Drum website. There are fact files, short stories, photographs and all sorts of other stuff to divert and entertain. I will probably be off the air for a few days, but look forward to getting back at it in the new year! 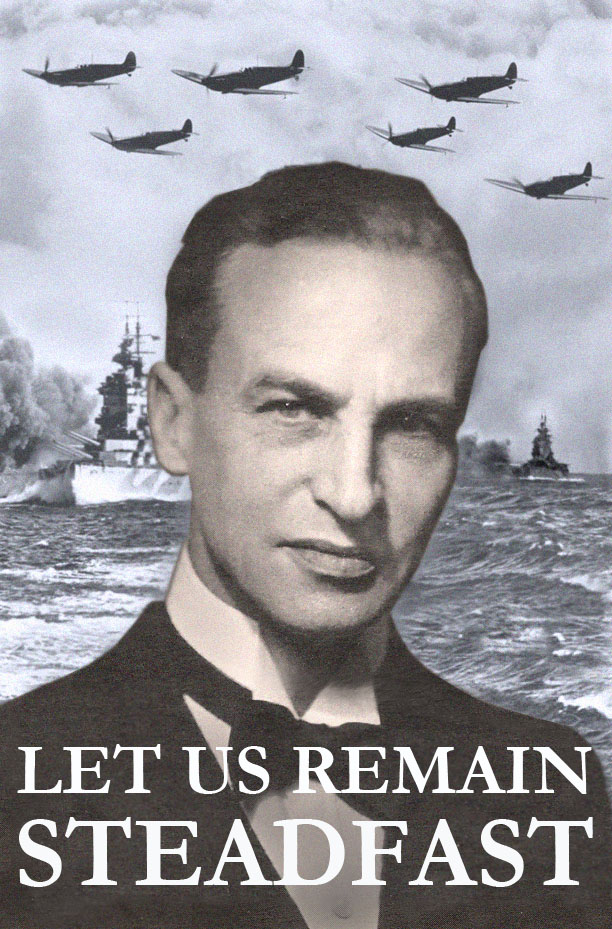 Archibald Sinclair: Leader of the Liberal Party, 1935 to 1952, Prime Minister of Britain 1941 to 1952. Sinclair is remembered as being the man who guided the country through some of the most turbulent years it endured in the modern era. From being ‘a voice crying in the wilderness’ during the 1930s; his resolute stand against the advocates of appeasement, led him eventually to the highest office in the UK. This poster was widely distributed throughout Britain in the early years of the Second World War and seemed to sum up the nation’s resolve in the face of aggression.

kelgar04 said:
Just read your most recent book I have to say the RN showed that the walls of the kingdom are the steel hulls of their ships.

Out of curiosity with british armour will the centurion be appearing earlier in TTL.
Click to expand...

Hi kelgar04, Sorry for the late response! The A41 'Centurion' is actually slightly delayed in terms of time in TTL (not appearing till 1947), but another tank, TTL's A36 'Claymore' will be built replacing the A27M 'Cromwell' from early 1945 onwards.

There was an actual A36 design in OTL which seems to have run parallel to the A34 'Comet'. Little information has survived about the OTL A36, but a document entitled ‘An Evolution of British tanks’ prepared by the School of Tank Technology Department of Tank Design in February 1945 (a copy is held at the Bovington Tank Museum) describes the OTL A36 design as being a heavier version of the A30 'Challenger' with increased immunity and stronger suspension. Like the Challenger the design was to mount a 17 pounder gun, its projected weight was 41.5 tons and the parent firm was Rolls-Royce.

For Drake's Drum I have created a speculative design based on what little info there is about A36. I will be posting an Appendix concerning the British Army in TTL on the Drake's Drum website within the next four weeks which will have details.

What if the Japanese battleship Tosa had been completed (rather than being expended as a target as she was in our time line)? This is Tosa as she might have appeared in 1945 before the Battle of Cape Padoran.

In our time line the B64 class large cruisers were cancelled in 1942. In Drake’s Drum, two are commissioned in their original role and are known as the Adzuma class.

The Imperial Japanese Navy Appendix is now up at the Drake’s Drum website.

Got this at Christmas, damn good read

The Drake's Drum website has been updated. All the Appendices dealing with the world's navies are now posted. Also updated, is the Order of Battle Appendix; all the naval actions that take place in Drake's Drum: The Reckoning are now included, as well as more detailed descriptions of some of the actions that were edited from the main text for the sake of brevity.

Below is the Italian aircraft carrier Falco. She was constructed from the incomplete hull of a Soviet Type 69 battle cruiser, captured at Sevastopol in the summer of 1942.

In the next couple of weeks I will start posting more of the Appendices that deal with land forces.