Do not trust the locals of a dimension. Ever. Dimension 27 was the most extreme example, but even honest people don't necessarily have the correct information. Our own Timeline has numerous points of debate, less advanced societies records are far more questionable.

What was the exact POD that led to this world? Most French records were destroyed in their bloody revolution, and -proving the old saying wrong- the British were rather incomplete in the records of the wars they lost to France.
However we do know that just before our discovery of this Dimension the following things happened:
Late 17th to mid 18th century: Britain's luck ran low, the French managed to win the wars in India and North America.
Late 18th century: The French people grew angry as the Nobles overworked them, needing more money to maintain their new empire, keeping the Thirteen Colonies under control, and fighting in India to build their empire. In 1769 the British colonists began a revolt against the French taxation, the revolt was stopped, but seeing it's costs taxation was removed, and placed on the peasants of France. The peasants were more loyal, but the price of the empire was too much, so when the British, still vengeful of their lost wars against the French crown, heard of the unrest they promised to support the revolution.
In 1794 the bloody revolution began. Many noble however escaped the revolutionaries, with many thousands of common royalists, and fled to New France, which had remained loyal. Hundreds however were stopped by the royal navy of Britain, forced to return to France.
When we discovered this dimension the year was 1801, and a war ravaged Europe. Austrians, Prussians and Russians attacked the Franco-British alliance, hoping to Re-instate the Monarchy, many villages fell into revolt due to royalist who had not escaped, and Spain soon joined the fray. 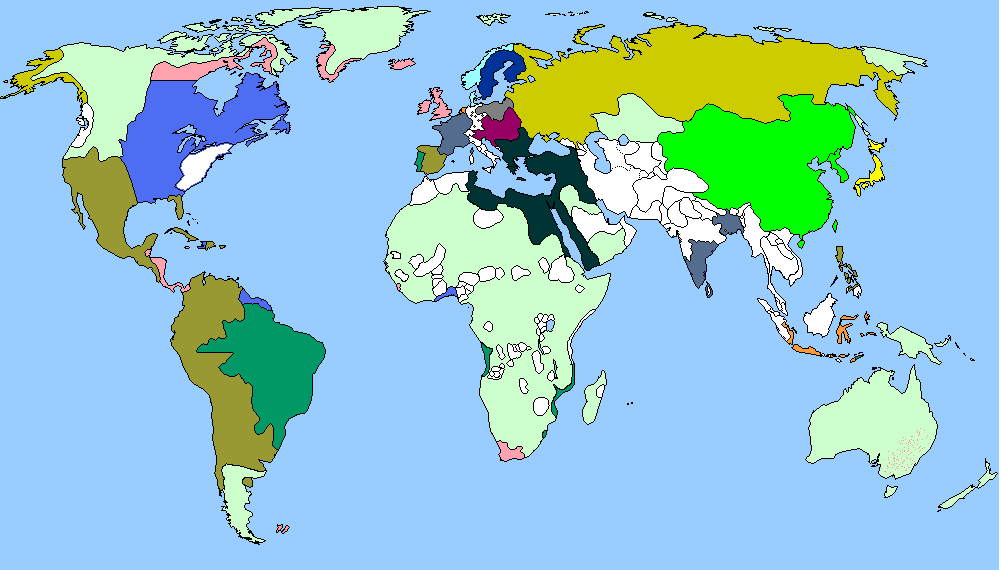 The British luck seemed to have returned, as the Anglo-French alliance defeated Spain, Prussia and Austria, with the Russians realizing the tide changed and switching sides. The Republic of France (the RF) and Britain enjoyed the spoils of victory. The Ottoman Empire also benefited from the chaos in Europe, expanding it's borders. However millions of immigrants fled to the Kingdom of France (KF), and it's strength has increased drastically, winning the North American theatre. In the East, massive drought have brought suffering to Japan, causing large uprisings against the central government. The year of this map is 1810, two years after the war ended. 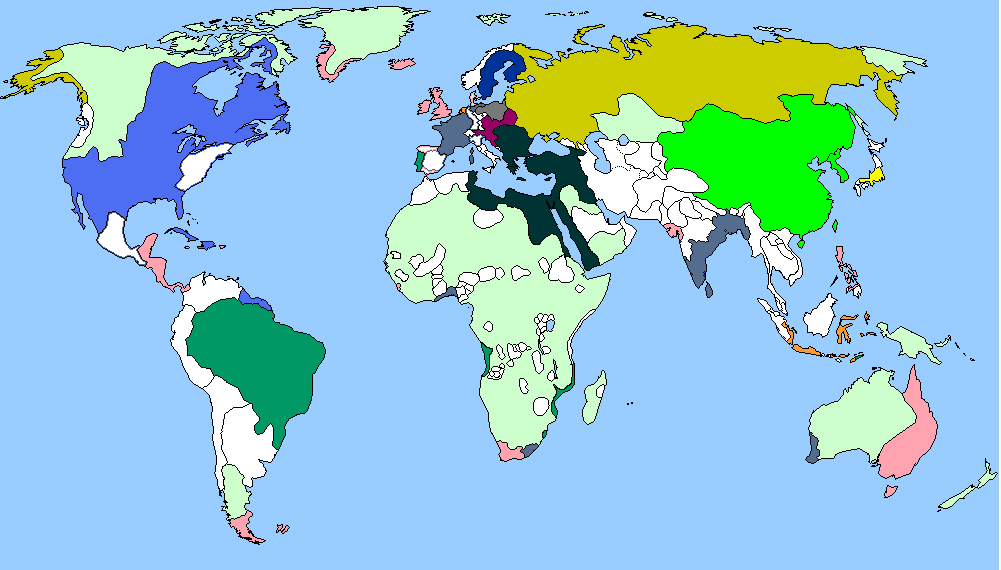 I think it's interesting to imagine a French victory in the Seven Years War. Especially in North America. The French treasury was strained in the war and they'd resort to the same attempts to tax the colonists as King George III did, only they'd be less hesitant to enforce compliance at the barrel of a musket.

One could imagine the forced deportation of the population and sales of lands to French noblemen to help pay the costs of the war.

(You have the 13 colonies as a puppet-state of the French, and I'm not sure that they'd be successful in suppressing the inevitable revolt.)

The French revolution was caused by over taxing to support the colonies; as well as several years of bad weather, leading to food shortages, making the taxes seem even harsher; a few charismatic leaders promising improved living standards, change, and freedom to the masses; and the promise of British support.
The Royalists are quite limited in their ability to communicate quickly with their European allies, as well they begin with a rather low population and poor infrastructure. However they have large amounts of space, resources, and (due to needing to keep the new territories under control) a large portion of the army. However they have no one who can compete with them in North America, and they become a major destination for Royalists in other countries to flee to in the face of the Anglo-French might.
The Americans, officially named The United North American Alliance, is a independent nation with the ability to trade with whom ever the wish, of course due to the strength of The Kingdom of France (called Quebec by the UK and French Republic), they tend to wish to do what Quebec is doing.

As I recall, many locations - particularly the East Coast population centres - were proud of their status as overseas Britons and considered themselves to be brothers to their British-based relatives (even if the family relationships went back several generations by this point). Also, immigration to the French American colonies tended to be low whereas the British colonies were positively teeming with colonists in comparison. The colonial wars built up a sense of identity which helped create the (basis of the) Union in 1776 and I think further encouraged this identity as British people, or at least the "White Anglo-Saxon Protestant" thing. Is there a chance that the (by some accounts inevitable) revolution against French rule could result in a Continental Congress (I'm thinking Albany Plan style, or thereabouts) could send a request to London to receive a Governor-General (albeit probably with a more limited set of powers) and in essence request reincorporation into the British Empire, as a kind of home-rule federation?

There were riots that the French quelled rather harshly before the French revolution. The government is propped up by the French, and later Quebec, armies. Their will be riots in future but their is little chance of a successful revolution, at least in the next century.

Part 3:
Late in the 1810s Prussia and Austria united against the Ottoman threat, forming the Prusso-Austrian Empire. In 1817 Russia went to war with Sweden, conquering a significant chunk of Finland. Britain and France expanded their empires. Britain took advantage of the chaos in Japan to gain control. Portugal, Quebec, Prusso-Austria, Sweden and United North American Alliance (UNAA) attacked the French, Russians, and British. The Second Royalist War thus began in 1825. 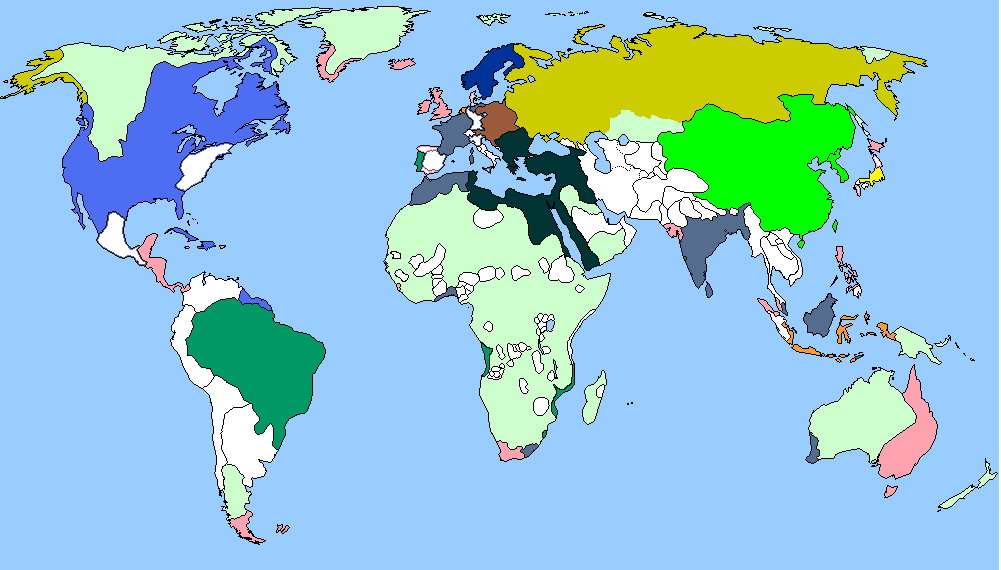 Does anyone in TTL have a map of their today?

catboy637 said:
Does anyone in TTL have a map of their today?
Click to expand...

Not quite sure what you mean. Modern (2009), which will be shown it due time; or the particular time on time line?

If the French tried to seriously settle the conquered parts of North America it would also mean displacing the First Nations from their lands west of the appalachians.

What sort of political order arises out of your version of the French Revolution??

I want to know becuse I might want to visit. I know some French, and also I'm naturally curious.

catboy637 said:
I want to know becuse I might want to visit. I know some French, and also I'm naturally curious.
Click to expand...

By 1831 peace had come at last. While the war was bloody for all, amazingly little changed for the surrounded Prussio-Austrian empire. Portugal however, was invaded by a massive French army, and the Royalty, fearing for their lives, fled to Brazil. They only just held on to a couple colonies, but made the New World become seen even more as a royalist region. The Swedes also suffered greatly, losing Finland, and a large territory in Norway. Britain began to strenghten it's grip in Japan, hoping for more control of the Pacific.
Note: Unlike the French royalty, the Portuguese official named their empire The Portuguese Empire of Brazil, though they had more strength to claim being named Portugal than Quebec had to claim to be France as a large amount of portuguese fled with the royalty to avoid french occupation. 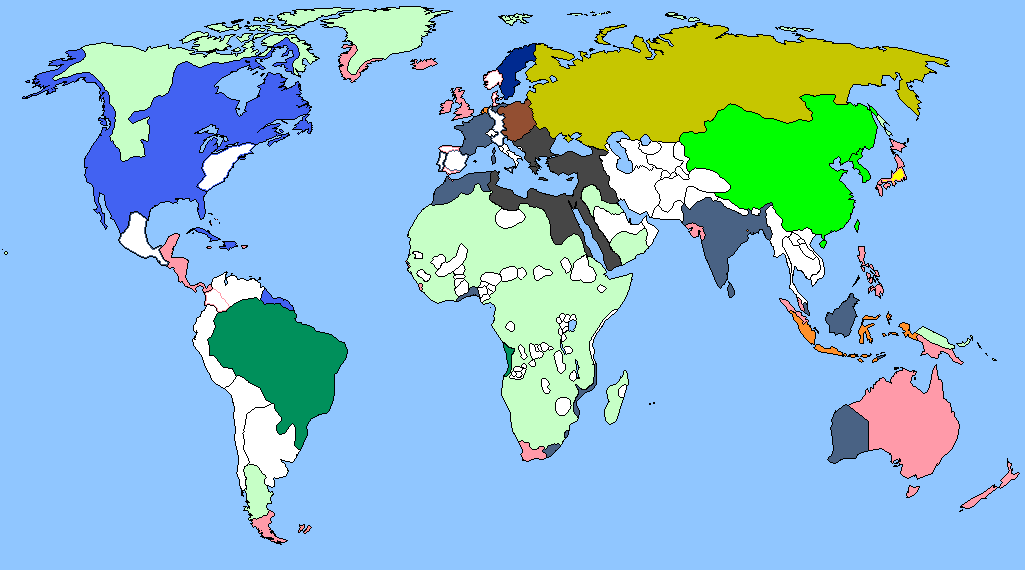 What's all that light green in Africa, North America and elsewhere?

Also, what was England's response to the conquest of Portugal? They were pals back then, weren't they?

codger said:
What's all that light green in Africa, North America and elsewhere?

Also, what was England's response to the conquest of Portugal? They were pals back then, weren't they?
Click to expand...


I belive light green represents tribal areas, without any large national territory. For Englands response to the invasion of Portugal:it had declared war on them and France, so they helped it's fall.

More wars have come and gone, though none on the scal of the Royalist Wars. Firstly, the Ottomon War, from 1836-1840, where Russia and Prussio-Austria formed an alliance to weaken the Ottomans whom the Russians and Prussio-Austrians regarded as a threat. This was followed by the Brazil-Pacifinca War (1838-1841), is which the Brazilians pushed to gain a Pacific coast. Lastly was the Chinese War, from 1841-1847,with Russia, France and Britain attacking China. It started with disputes of borders between the British colonies and the Chinese claims that Britain and France were smuggling opium, and other goods, into China. The map is 1850. 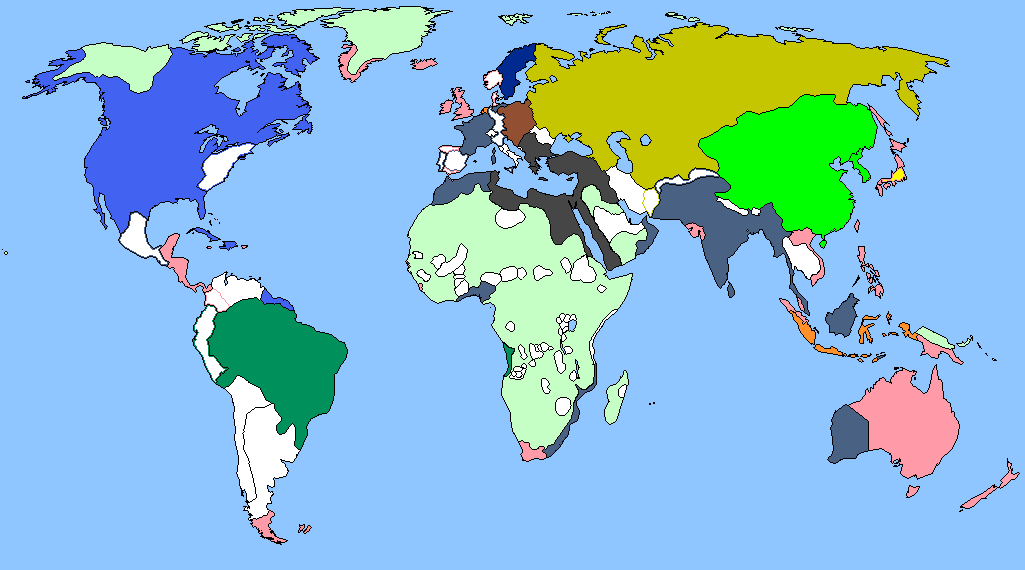 The Royalist flag of France, the blue line represents the Atlantic. 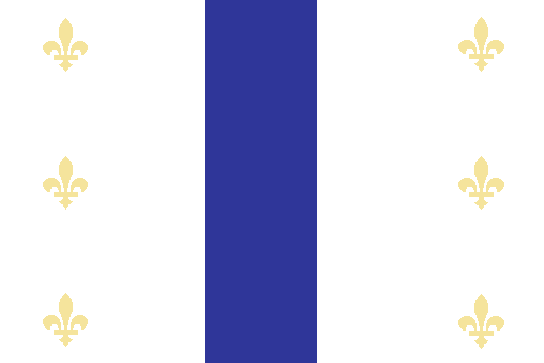