It was going to be a whirlwind of a week for her, as the newly elected Chancellor of the Federal Republic of Germany. Her schedule was crammed with meetings and briefings; as she looked at her calendar to prepare for the day, most of what she could see was predictably routine. Meetings with the Finance Ministry, the Foreign Ministry, a press conference after a working lunch, followed by a briefing from the Defense Ministry, followed by....a "Special Security Issues" meeting with an Admiral from the Bundesmarine...and only that Admiral. She quietly wondered what the hell that was going to cover. She'd end the day with party meetings, followed by a political dinner. A long day indeed.

The first meetings were mostly what she'd expected. She wasn't surprised that the government finances weren't quite what the opposition had indicated, and she wasn't exactly looking forward to that mini summit with the Russian President either. The Defense Minsitry's briefing wasn't exactly news to her; she'd served as the shadow to the Defense Minister four years ago; she'd had intense discussions about increasing the Bundeswehr's strength by a full division in light of greater European tensions, and there were discussions about replacing the older Tornado strike aircraft with the chief of the Luftwaffe. Soon the meeting was running over, and the three others left, leaving her with the Admiral in charge of the fleet.

He spoke: "So, you're wondering what the hell the next briefing is about, every Chancellor always does. Although the meeting is listed as taking place with me, you're actually going to be briefed by Konteradmiral Schmidt. For the purposes of public record, the meeting concerns political and military intelligence about Russian intentions towards NATO and the Federal Republic. Here's a summary you're going to have to read anyways. That's not what the meeting is about."

Another man entered the room. "Gerhard here is going to tell you what the meeting is actually about; we'll talk about reintroducing fixed wing strike fighter capability to the Bundesmarine's air arm next week."

The senior admiral left the room. Her interest was piqued.

"So what the devil is all this about. It takes up a full hour of my schedule on the first day, so it must be important, complex, or interesting."

"Chancellor, I'm here to brief you on the procedures surrounding the Federal Republic's special weapons capabilities."

"You mean what happens if NATO were ever to have to use the B61 gravity bombs stored in the hardened aircraft shelters at Buchel airbase?"

She quietly felt disappointed. She'd expected something more intriguing than this."

"You're telling me that the Federal Republic built nuclear weapons, and neither Washington nor Moscow knows about them. How the hell....."

"You're mistaken Chancellor, the Federal Republic never had a nuclear weapons program. Erich Honecker did. We inherited them. Kohl made the decision to keep them around."

"Chancellor, that's what the hour is for. Every chancellor always wants to hear the story....."
Last edited: Nov 24, 2019
Project Stachelschwein

The Admiral began "If you've ever wondered why neither Erich Honecker or Markus Wolf ever spent a single day in prison, this is the answer. The Bundesrepublik's current nuclear arsenal was basically born in 1968 amidst the events of the Prague Spring. Back then Erich Honecker was the Socialist Unity Party's secretary for security issues. As events in Czechoslovakia unfolded, Honecker watched as factions in Prague slowly manipulated Moscow into taking action. Although he applauded the removal of the reformers, a few things occurred to him. First, very soon, he was probably going to end up in charge of running East Germany; the day was coming when Walter Ulbricht, a Stalinist fossil, was going to be canned. He'd fallen out of favor with Moscow, and the Kremlin had more than quietly let it be known that he was their preferred successor. Secondly, if Moscow could be manipulated by internal factions into getting rid of Alexander Dubcek and the reformers, the day might come when the Kremlin decided it was time to get rid of him. Finally, he'd watched when once upon a time the USSR sold out their occupation zone of Austria to the capitalists; he had no desire to see the same happen to the socialist fatherland." 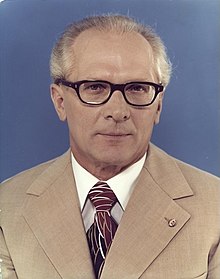 The Chancellor said "So Honecker wanted the bomb as a bargaining chip and as an ace in the hole for the day when the shit hit the fan, no"? As Chancellor, she could quietly see the appeal. No German wanted to relive the horrors of the Red Army's arrival in Berlin in 1945. At the same time, although highly unlikely, the day might come when an American President or NATO could not be relied upon to provide the necessary security for the Federal Republic. Although the shock was still there, she was already processing the implications of being the world's 10th nuclear weapons state.

The Admiral answered "Should such a crisis ever arrive, Honecker would detonate a nuclear weapon in an abandoned mine in the Ore Mountains, and Moscow, Washington, and Bonn would have something entirely new to think about."

He continued "At about the same time, there were rumblings that India and South Africa were embarking on programs to develop their own nuclear weapons. Israel already had the bomb by 1966. Honecker figured that if Israel could do it, the DDR could as well. The know how and resources were there, and if there were issues....well, there was nothing that the Ministry of State Security couldn't procure eventually.

So, with that in mind, as a preliminary step Honecker summoned Markus Wolf, East Germany's spymaster, to a one on one meeting soon after he came to power in 1971. He asked Wolf to direct an in house expert at the HVA, the foreign intelligence arm of the Stasi, to write a secret briefing paper detailing a) how Israel had gotten the bomb, and b) how West Germany would go about building an atomic weapons program. In the short term, this would give Honecker some preliminary details and cost assessments for a nuclear weapons program for the GDR without arousing too much suspicion or running too many risks. Moscow would shit bricks at the mere thought of either Germany having atomic arms at their own disposal."

The Chancellor asked "You mention that Markus Wolf managed to avoid prison. He must have rather quickly put two and two together, no?"

The Admiral handed her a thick file "Everyone always wants to read the file too. Markus Wolf was nobody's fool. Later on, Wolf wrote that Honecker seemed a bit too...excited about what should have been a routine request for information. Wolf decided to keep the whole thing secret from his big Stasi boss, Mielke. And so formally began what became known as Project Stachelschwein."
Last edited: Nov 25, 2019

You have my attention.

Yes that is a very cool idea
Watched

Interesting start if nothing else...
But the Title... makes one cringe.
"Die Atombomben der Bundesrepublik" would be correct.

matzeskatze said:
Interesting start if nothing else...
But the Title... makes one cringe.
"Die Atombomben der Bundesrepublik" would be correct.
Click to expand...

Germany with nukes? Yeah, I can see why that would be kept quiet. If they thought Washington and Moscow would be annoyed, that would be nothing compared to the fit thrown by London and Paris.

Donor
So a secret West German nuclear program? Implausible but interesting. And then the twist. A very very interesting POD and quite a plausible one

So, Germany's nukes are akin to Israeli nukes IOTL?

Not really. Israel's nuclear weapons are a deterrent, and their existence is deliberately ambiguous. No one has a clue that Germany has them, and Germany wants to keep it that way unless they need to reveal them.

Radek said:
Germany with nukes? Yeah, I can see why that would be kept quiet. If they thought Washington and Moscow would be annoyed, that would be nothing compared to the fit thrown by London and Paris.
Click to expand...

Realistically, they can throw as big a verbal fit as they want... now doing something about it is a whole other matter.

Alanith said:
Realistically, they can throw as big a verbal fit as they want... now doing something about it is a whole other matter.
Click to expand...

Germany having nuclear weapons--secretly and in direct violation of the treaty they signed--could have catastrophic economic consequences. Sanctions and just distrust--worst case, global trade disruptions.

Alanith said:
Realistically, they can throw as big a verbal fit as they want... now doing something about it is a whole other matter.
Click to expand...

West Germany had Nukes on their soil, but they were dual key.

That said, JFK was pretty upset on hearing that the Germans and French were doing nuclear weapons work. Those rumors were false.

I really don't see the Russians letting the East German government having any sort of nuclear weapons capability giving what Germany did to them during world war two
Threadmarks
You must log in or register to reply here.
Top
Top