Should we continue this? I started it for fun but I feel like I'm going nowhere. I have officially left this project in your hands. You guys can build on the lore, and I'll just drop in to see how it's going.
Thanks!

Hindustani Person said:
Should we continue this? I started it for fun but I feel like I'm going nowhere. I have officially left this project in your hands. You guys can build on the lore, and I'll just drop in to see how it's going.
Thanks!
Click to expand...

Feel free to retcon anything you think makes no sense, or add WACKY ideas if you want.

I do want to continue with this project, but I have a lot of IRL things that are getting in the way.
Hindustani Person’s revised Timeline

Here is my version of @KaiserEmu ‘s timeline

World War I
Four years after it began, World War I is over. The Central Powers have won, but the world is far from at peace.

A decade of civil wars, new ideologies and rapid change has resulted in an entirely different world to the one of twenty years ago. But as the 1920s draw to a close, the chaos is only beginning…

With totalitarian regimes on the rise across the globe, war seems inevitable. But no one yet knows when they will be plunged into the abyss of another global conflict…
Last edited: Dec 13, 2019

Any questions or suggestions? PM me!

I confirmed it
Some other details will be-
2 paths for Italy after Gabrielle D’Annunzio’s death, a crazy Romanist one under Julius Ebola, or a relatively moderate one under Italo Balbo.
Social Nationalist UK under Mosley.
MANY German paths, including a demsoc SPD path, a socnat Strasser path, a conservative Zentrum path, and so on!

Here is the thread!
https://www.alternatehistory.com/forum/threads/ein-platz-an-der-sonne-yes-another-ah-hoi4-mod.480136/
WWII

I have some (WIP) maps of the Second World War ITTL: 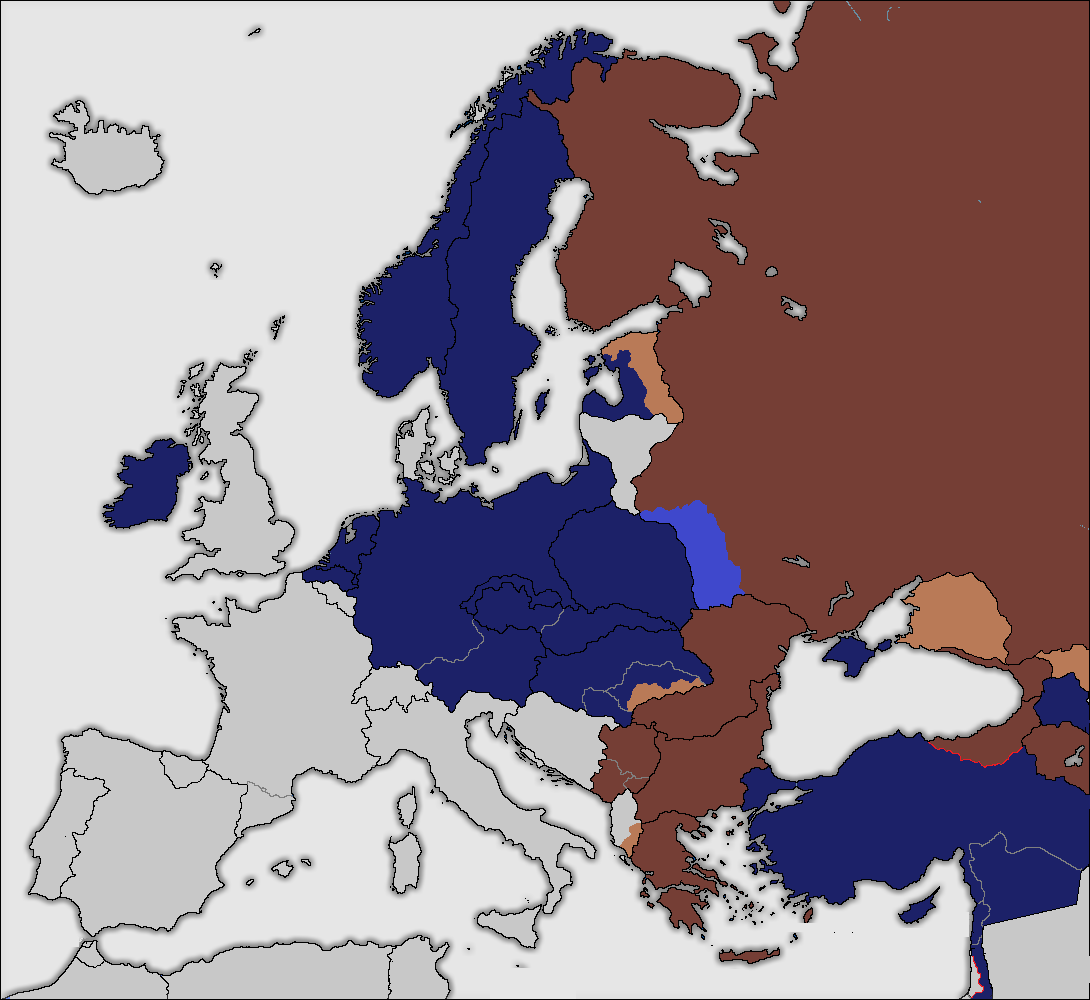 August 1942. the war begins with the Russian invasion of the United Baltic Duchy.
Montana and Kuban are occupied.
Rhomania invades Transylvania, and Greece invades Northern Epirus. 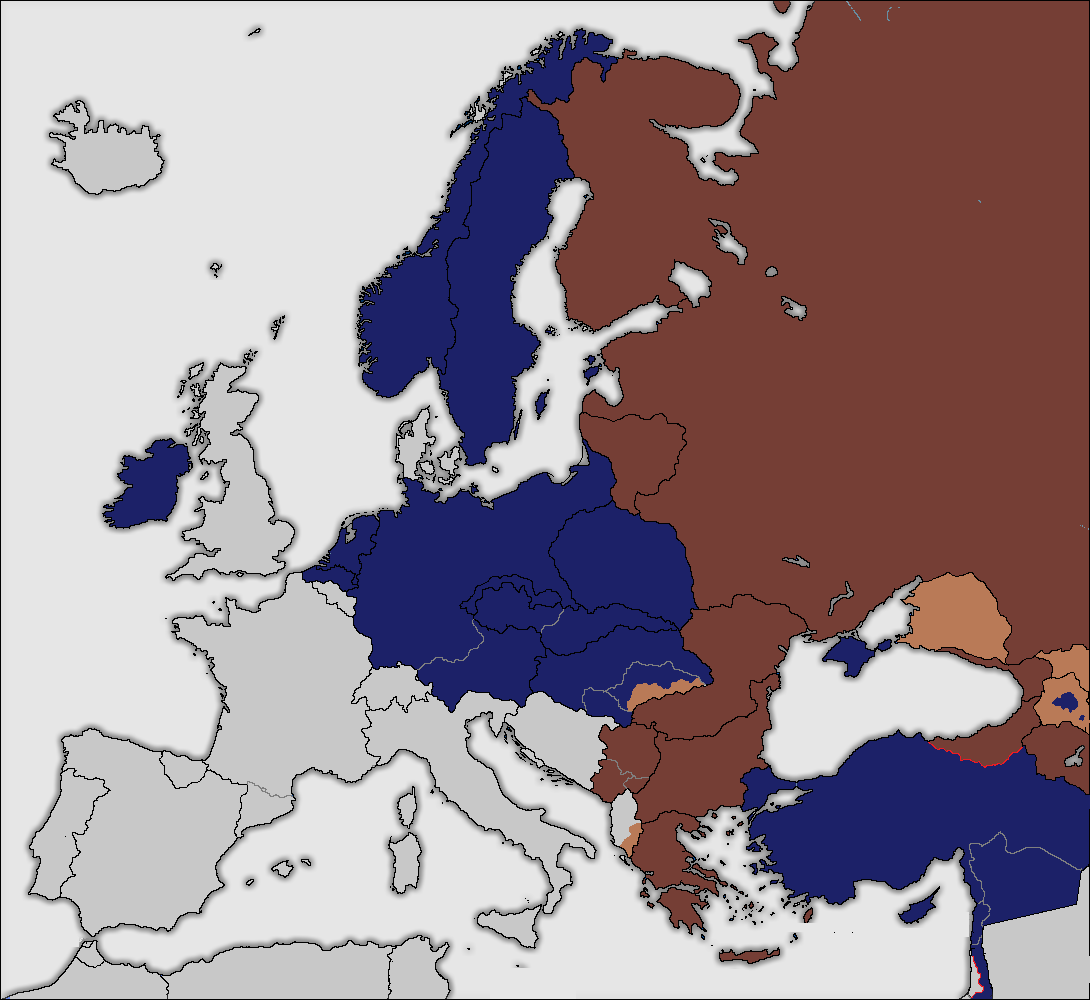 November 1942
Lithuania joins the Axis
the U.B.D is annexed into Russia
Georgia is invaded 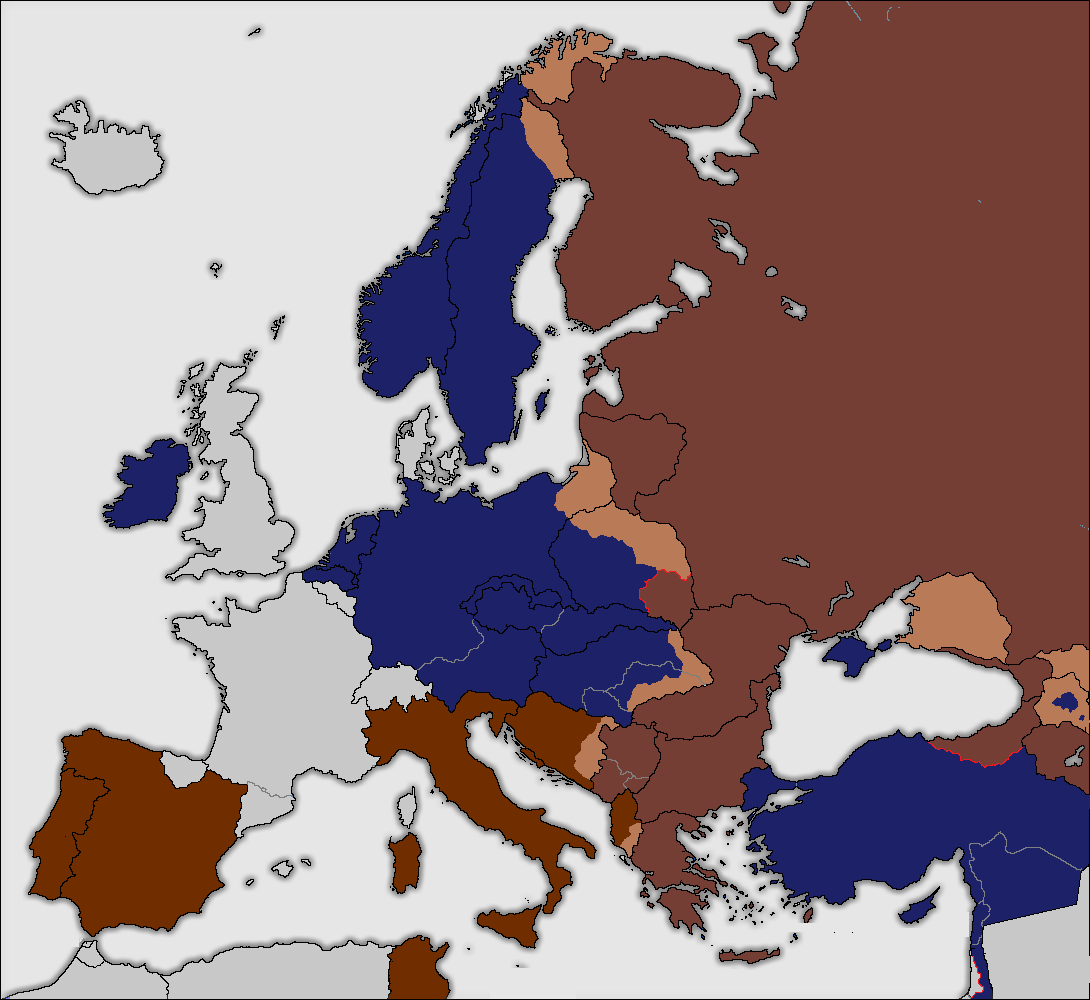 february 1943
the invasion of Poland and Germany begin. Bukhovina rebels against the Polish government. Serbia invades Dalmatia, and the Romanist Pact joins the war. 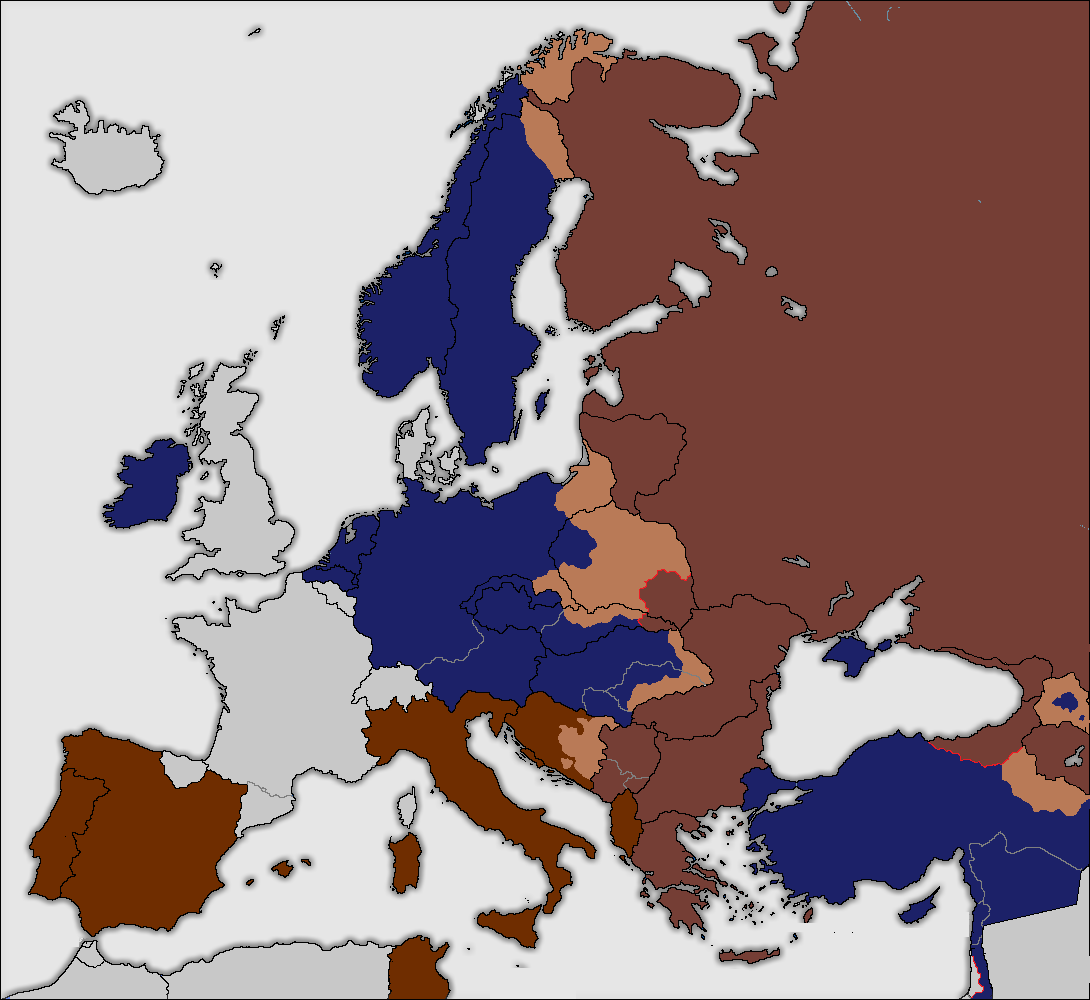 April 1943
Poland is near collapse. Bukhovina declares itself the Rusyn Free State, and invades Transcarpathia with the support of the Axis. at the same time, Czechoslovakia is invaded. 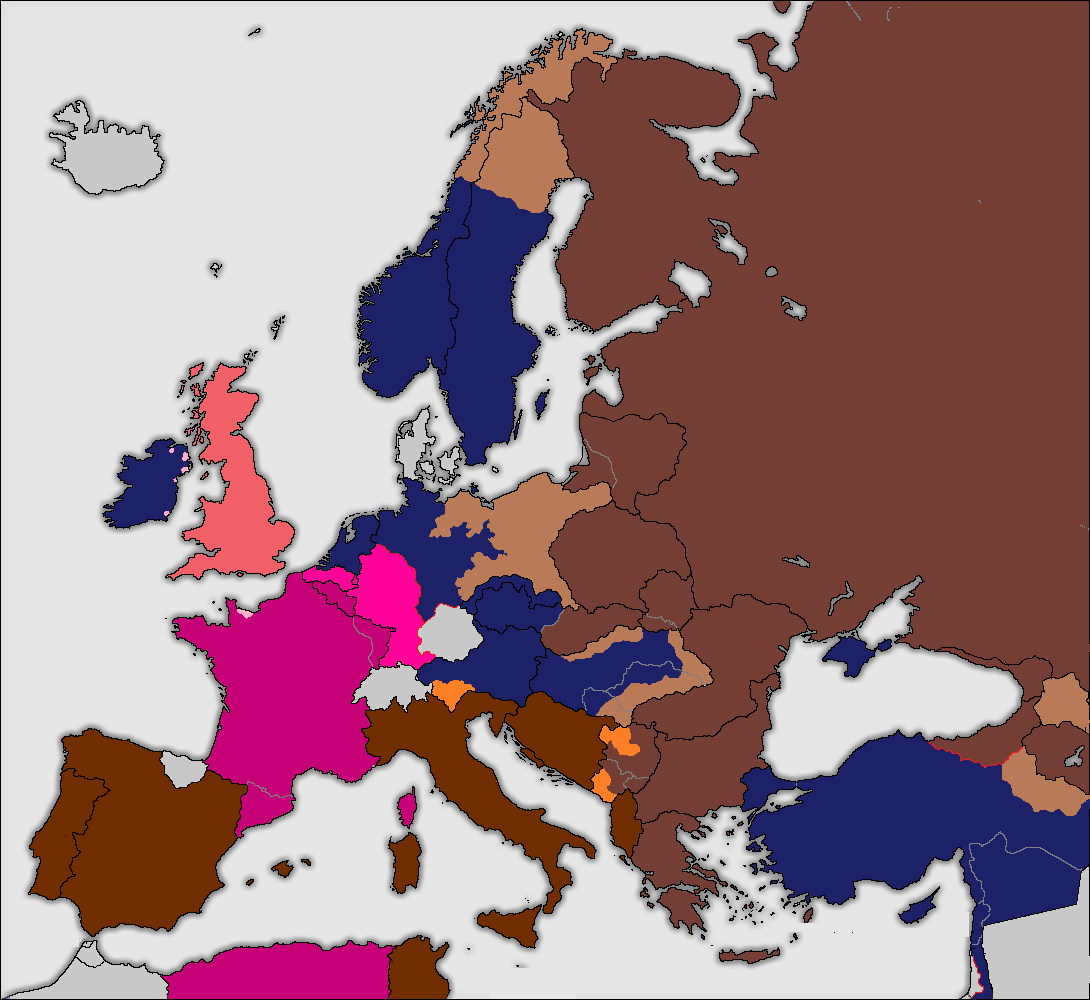 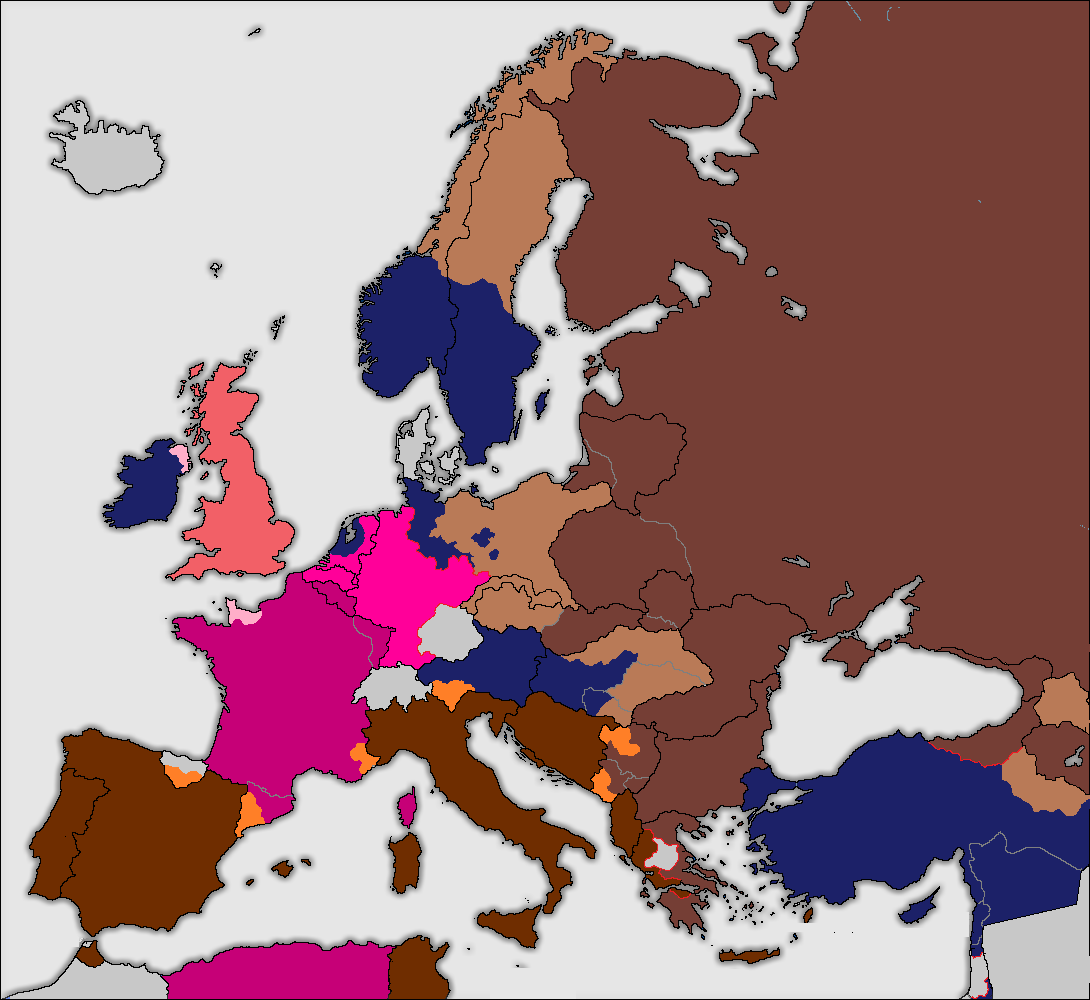 August 1943. The greatest extent of the offensive into Germany. The Allied Headquarters is moved to Vienna. Hellas undergoes a civil war between the pro-axis government, Hellenist rebels, and Socialists. Romanist offensives continue. 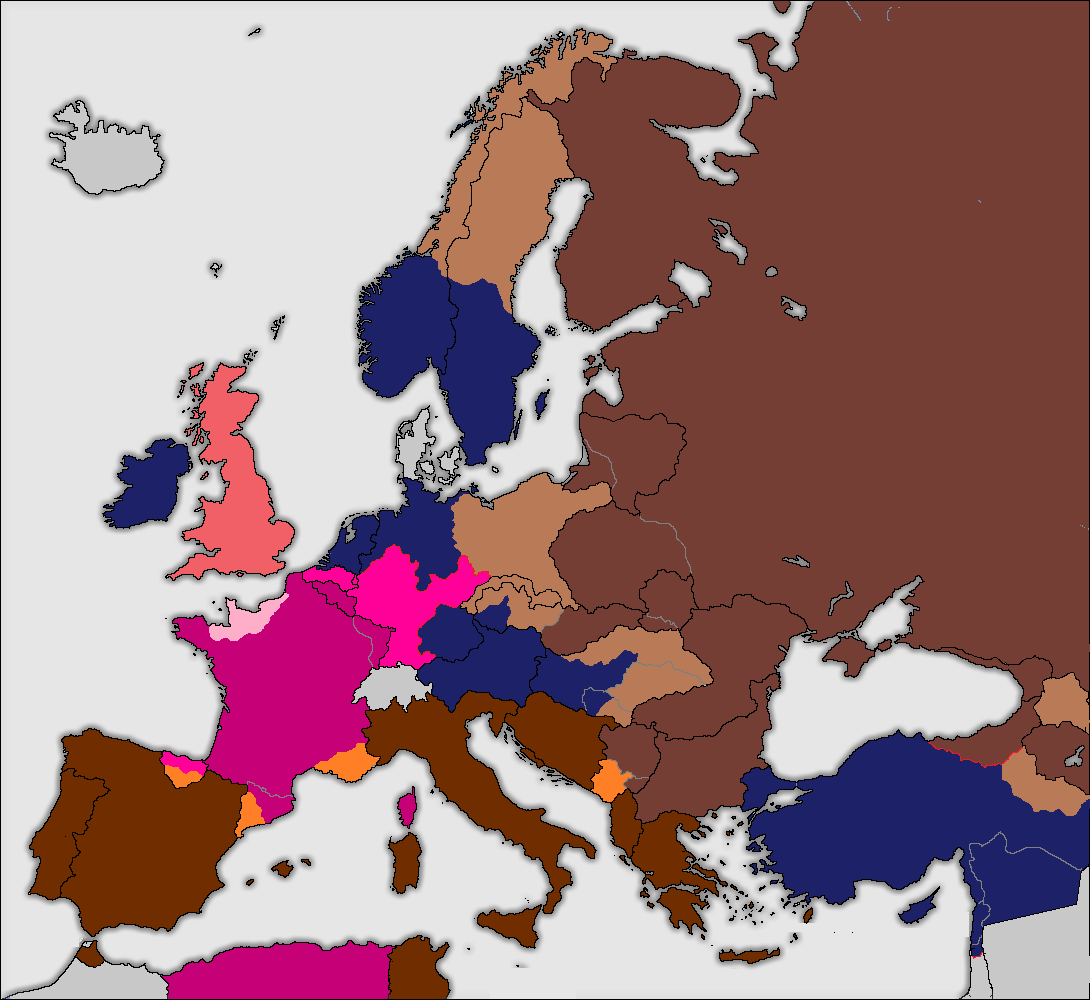 October 1943. Proactivist and Romanist forces are starting to make headway in France. America enters the war, on the side of the allies after Japan joins the axis. Montenegro is entirely occupied by Romanist forces. Hellas becomes a part of the Romanist alliance. 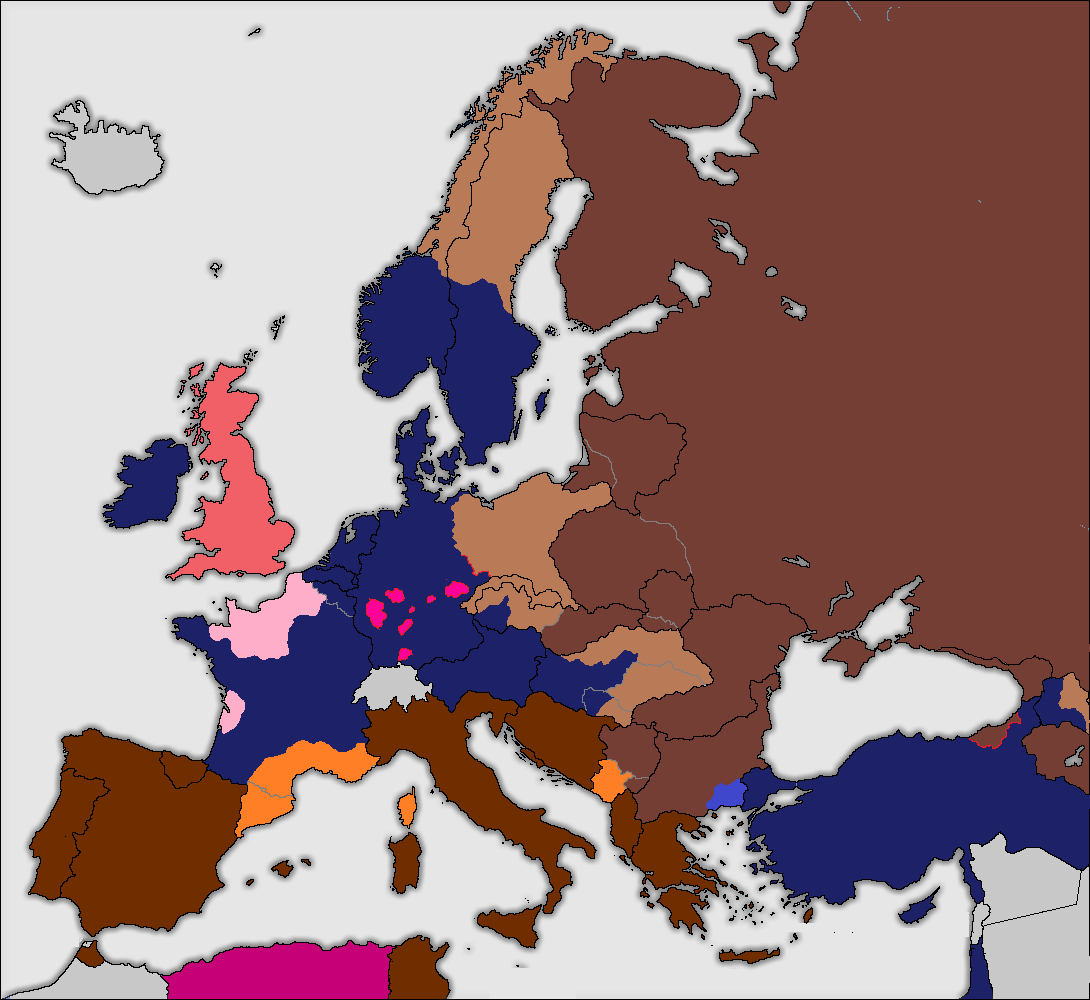 March 1944. with the Proactivists and the Romanists closing in, France joins the allies, on the condition that it has to withdraw from Germany, abandoning the VRD. 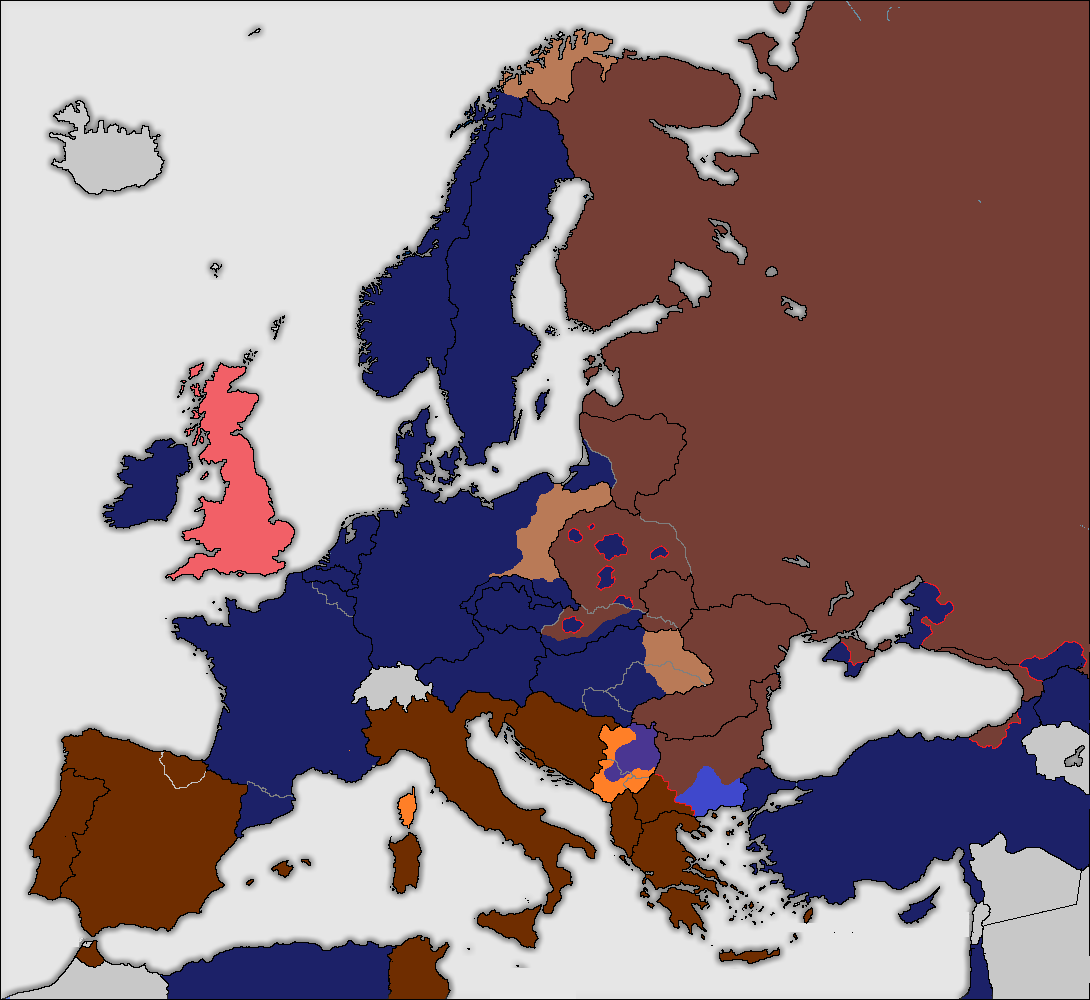 May 1944. East Prussia is retaken from Lithuania. the Romanists withdraw from France, and the Proactivsts are forced to do the same. Russia is losing control over the Caucasus and Poland. Serbia withdraws from the Axis, and fights the Romanists on its own. Bulgaria is underattack from Ottoman and Hellenic forces. 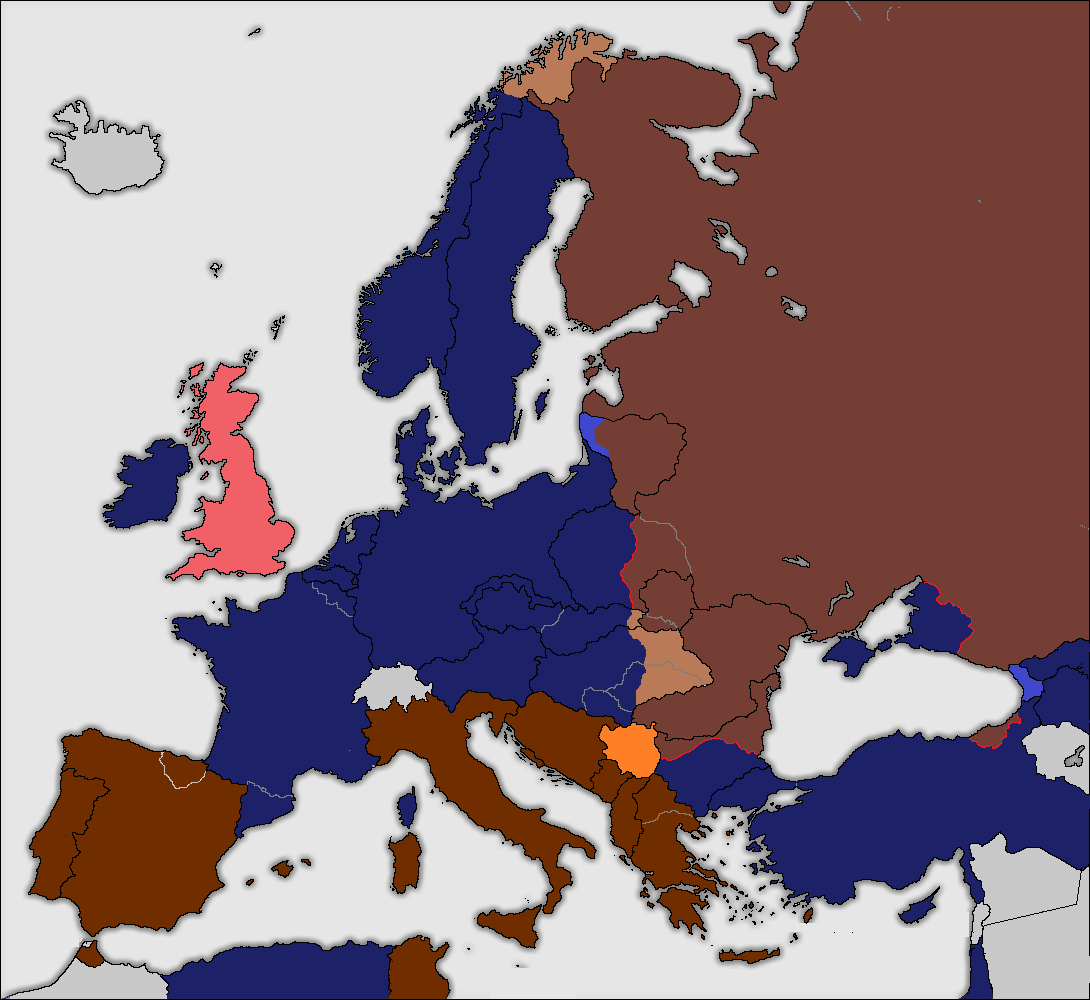 September 1944. the Eastern front has reached a stalemate. in the Balkans, Bulgaria now has two governments, a pro allied and pro axis one. Serbia is under military occupation, while Montenegro was seperated as a puppet state. Roman Illyria also annexed some land. 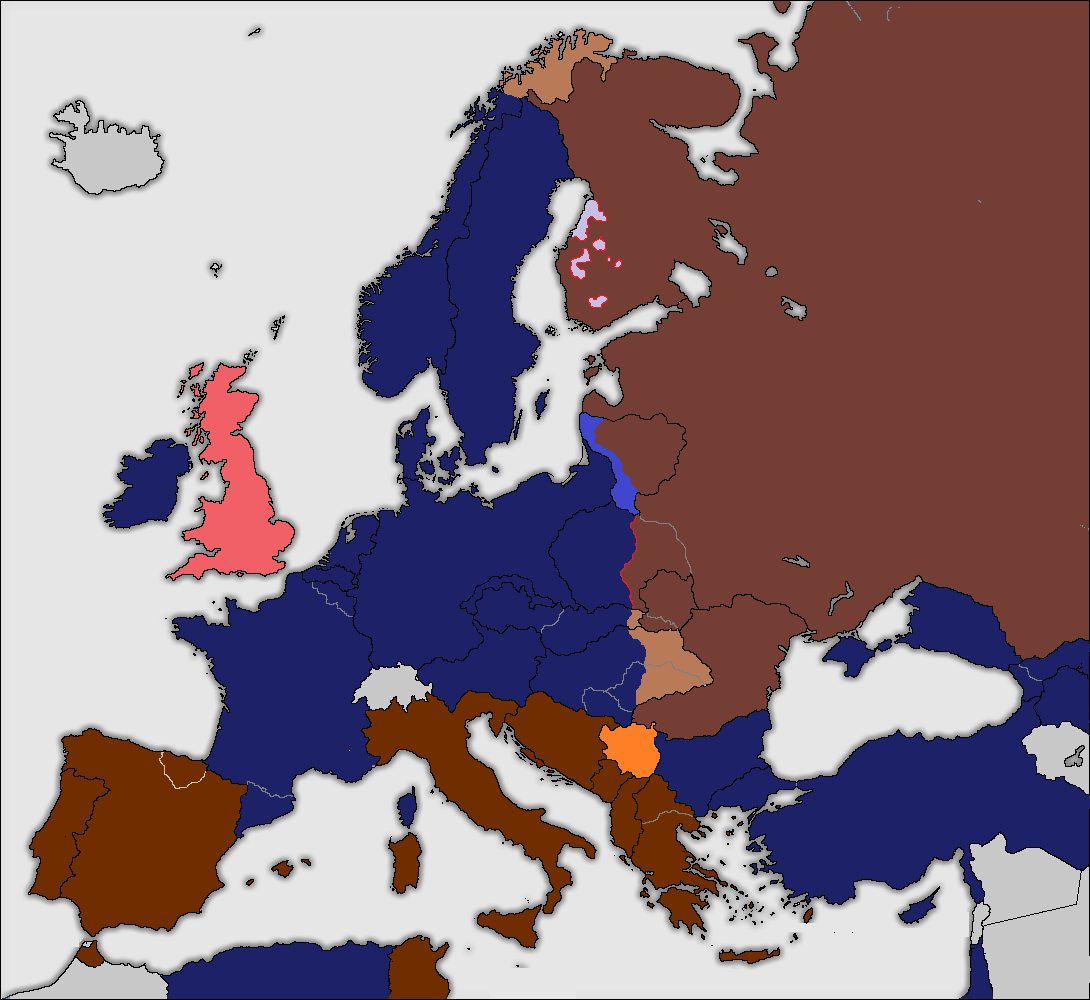 May 1945. in OTL, WWII is over. in TTL, it's still ongoing. Bulgaria has joined the allies, and Kuban, Montana, Georgia, and the other Caucasus nations have been liberated. Rebellions in Finland have begun, and the Russian State is starting to break under the strain. 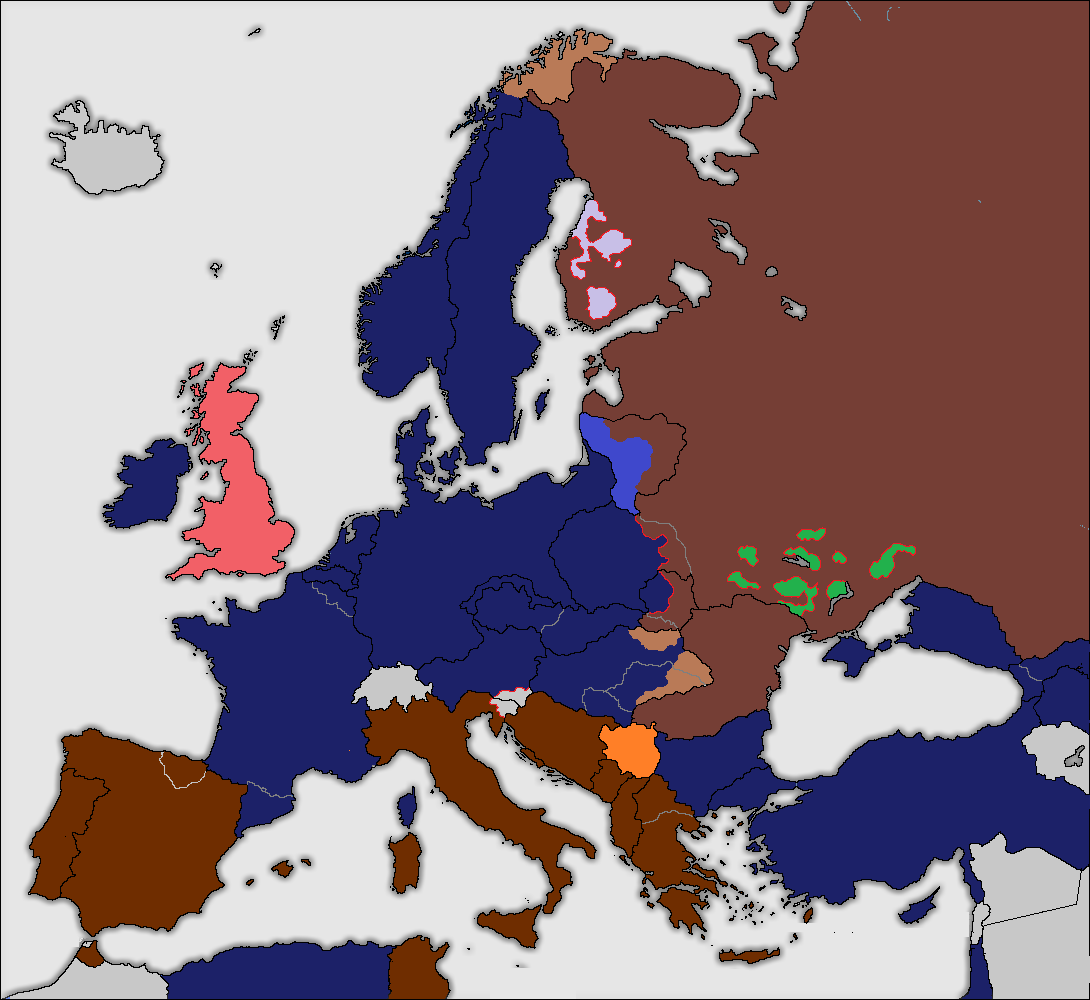 July 1945. The stalemate is broken. Poland is almost entirely liberated, and Hungary is advanceing against Rhomania. The Rebellions across Russia grow stronger. 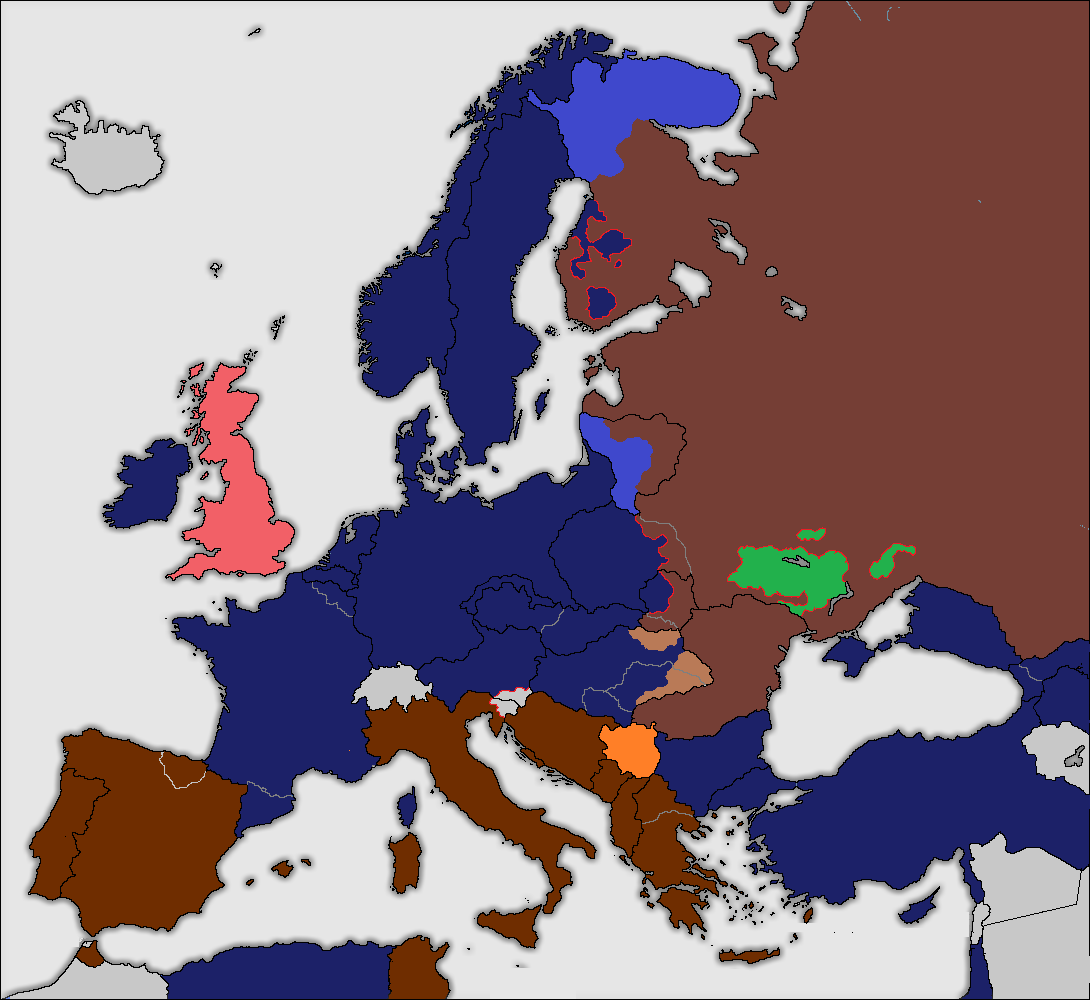 August 1945. the Northern front is moving faster now, since the Finnish joined the allies. Slovenes use this time to revolt against the Romanists and the Austrians. 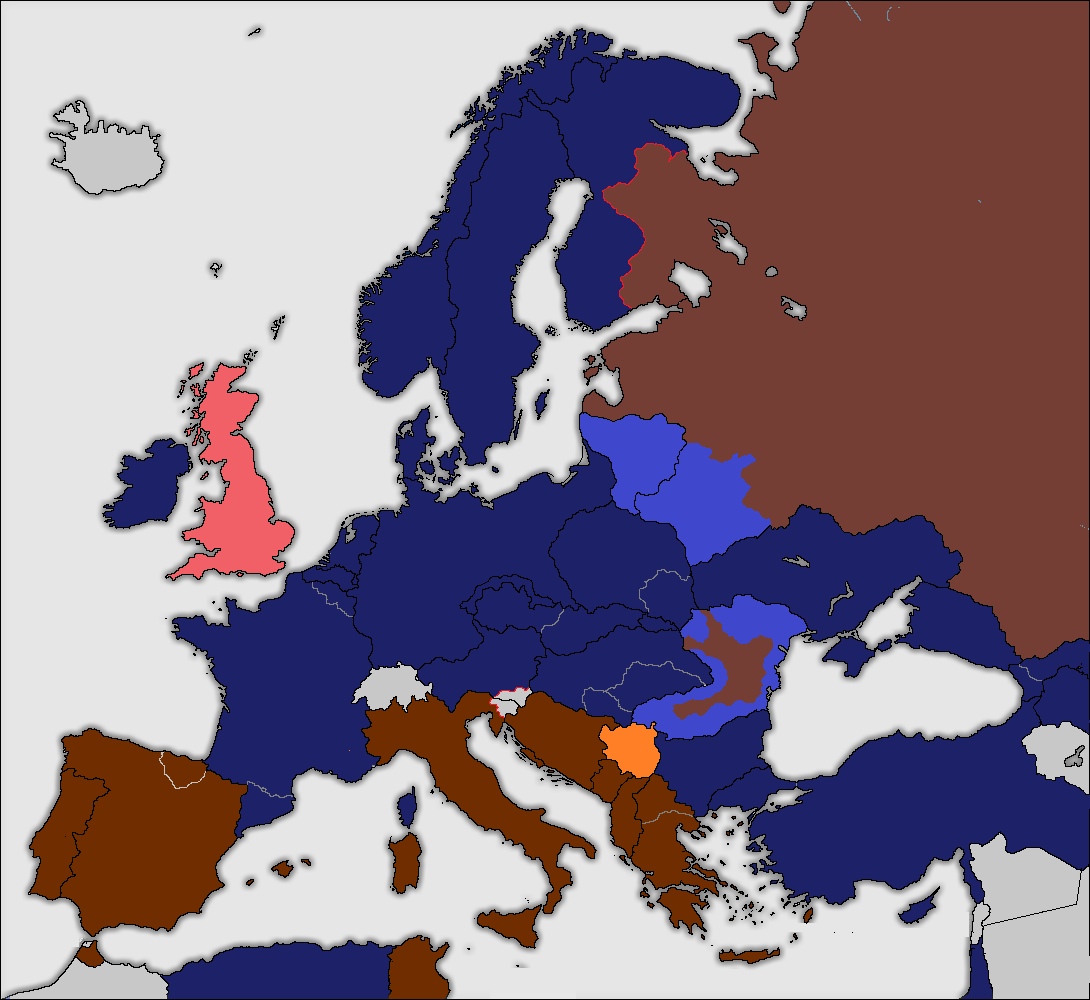 January 1946. Rhomania is near collapse. Russia has had to deploy more troops to the east. Lithuania falls, and the Invasion of Russia begins in earnest (albeit very slowly) 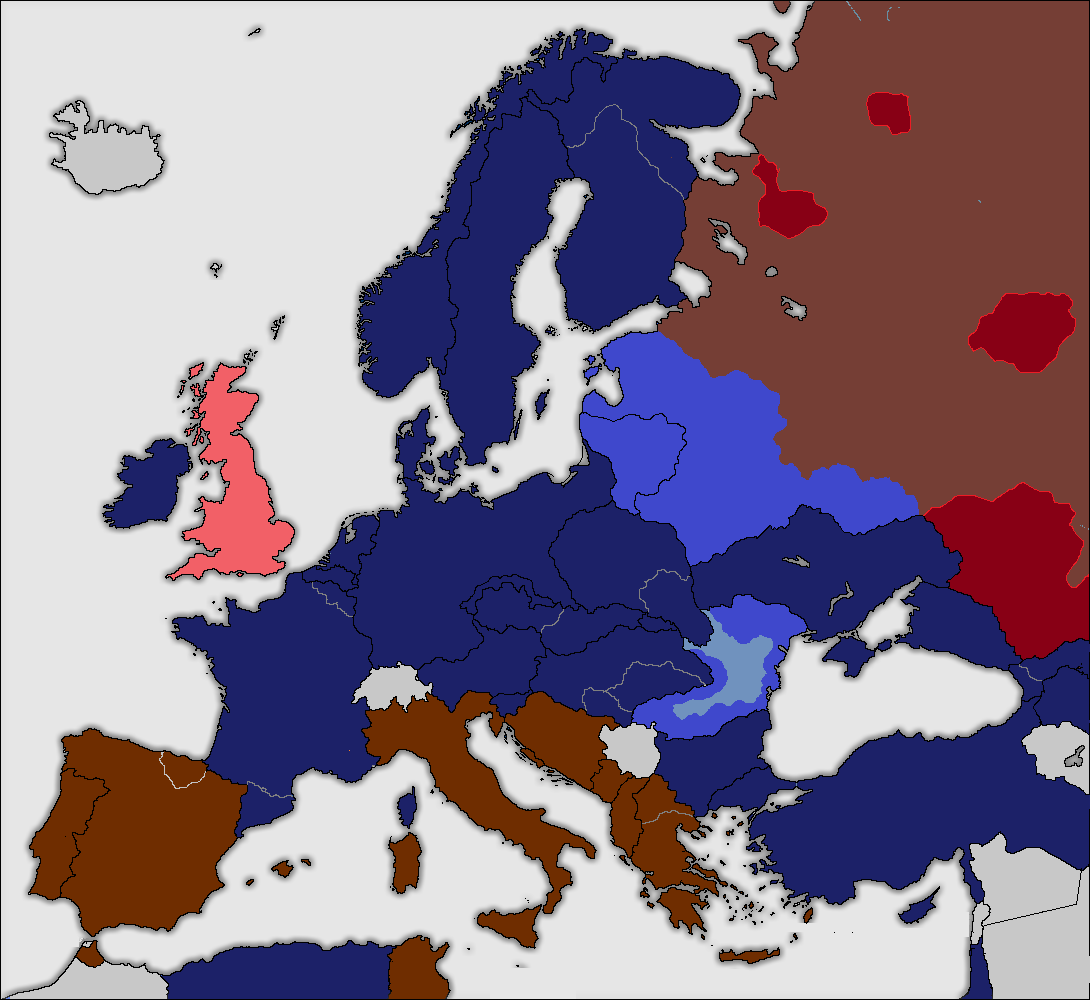 April 1946. the Eastern front is advancing rapdly, in part due to warmer temperatures, in part due to the Civil war. The Neo-Bolsheviks have finally reached their way west.
Rhomania collapses into anarchy due to food shortages, and the allies move in. Bukhovina is reannexed to Poland, and placed under brutal military occupation. Slovenia's independence is recognized, on the condition it joins the allies, and the Romanists withdraw from Serbia.
TBC... 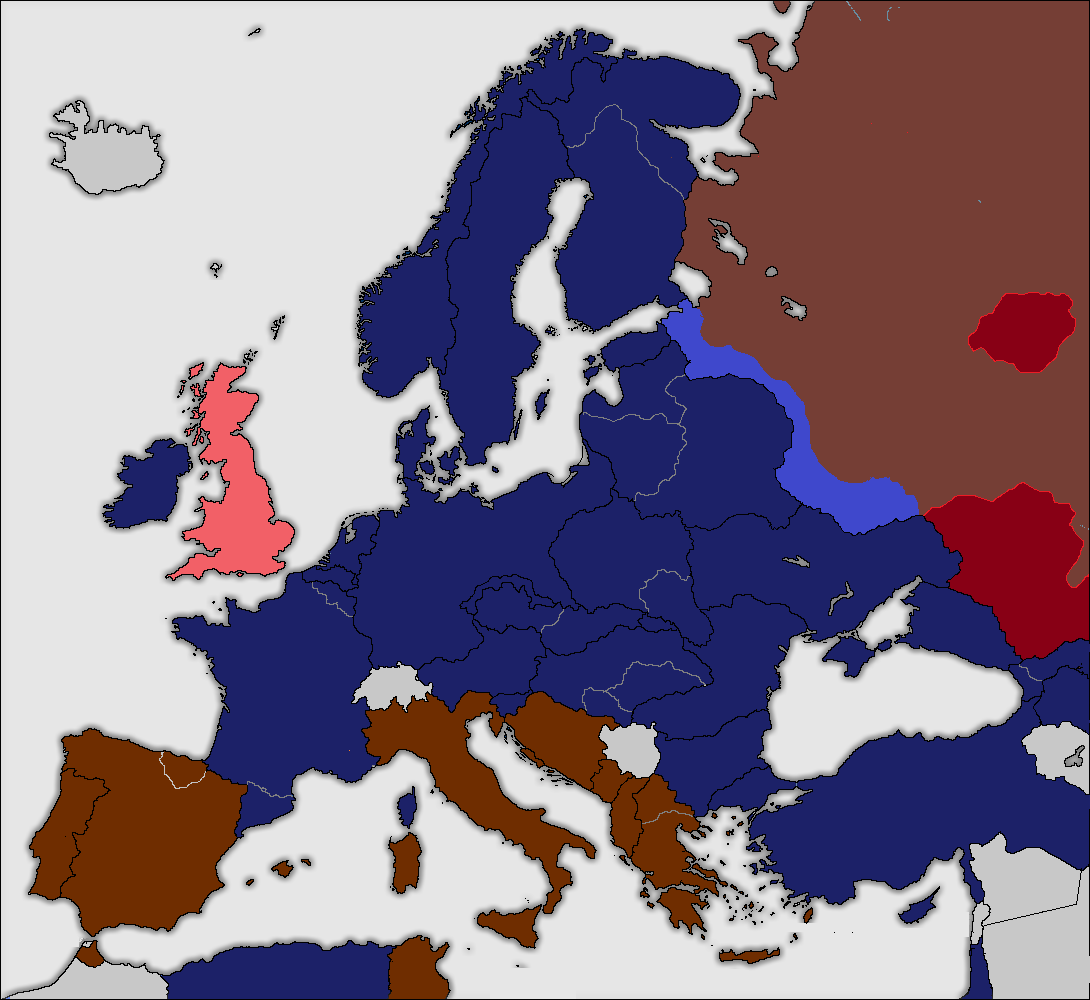 May 1946. The Allies reorganize eastern Europe, giving some small border concessions to Poland and Ukraine, and founding the Baltoslavic Federation. Based off the failed kingdom of Lithuania-Belarus, Baltoslavia includes the soverign nations of Courland-Samogtia (renamed Latvia in the 80s), Lithuania, and Belorussia. Rodzhaevsky is losing control of Russia, and the allies are drawing closer to Moscow. 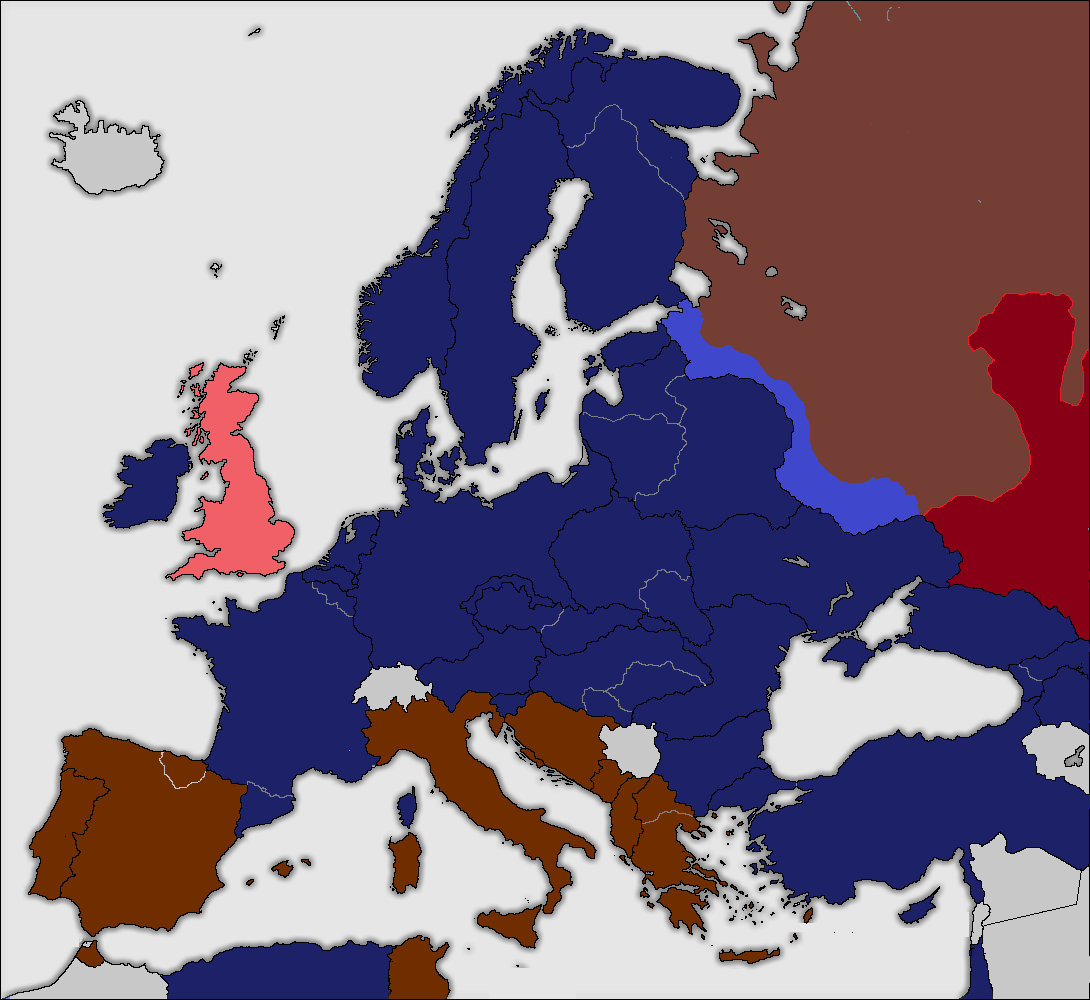 September 1946. Britain offically declares acessation of hostilities, after having lost much of their already weakened colonial empire, and after the successful blockade of the home isles. the Romanists also sign a peace accord, though they continue to have their troops stationed at the borders. Rodzhaevsky is arrested attempiting to flee moscow in October, and the Neo-Bolsheviks sign a peace accord. the war is over. 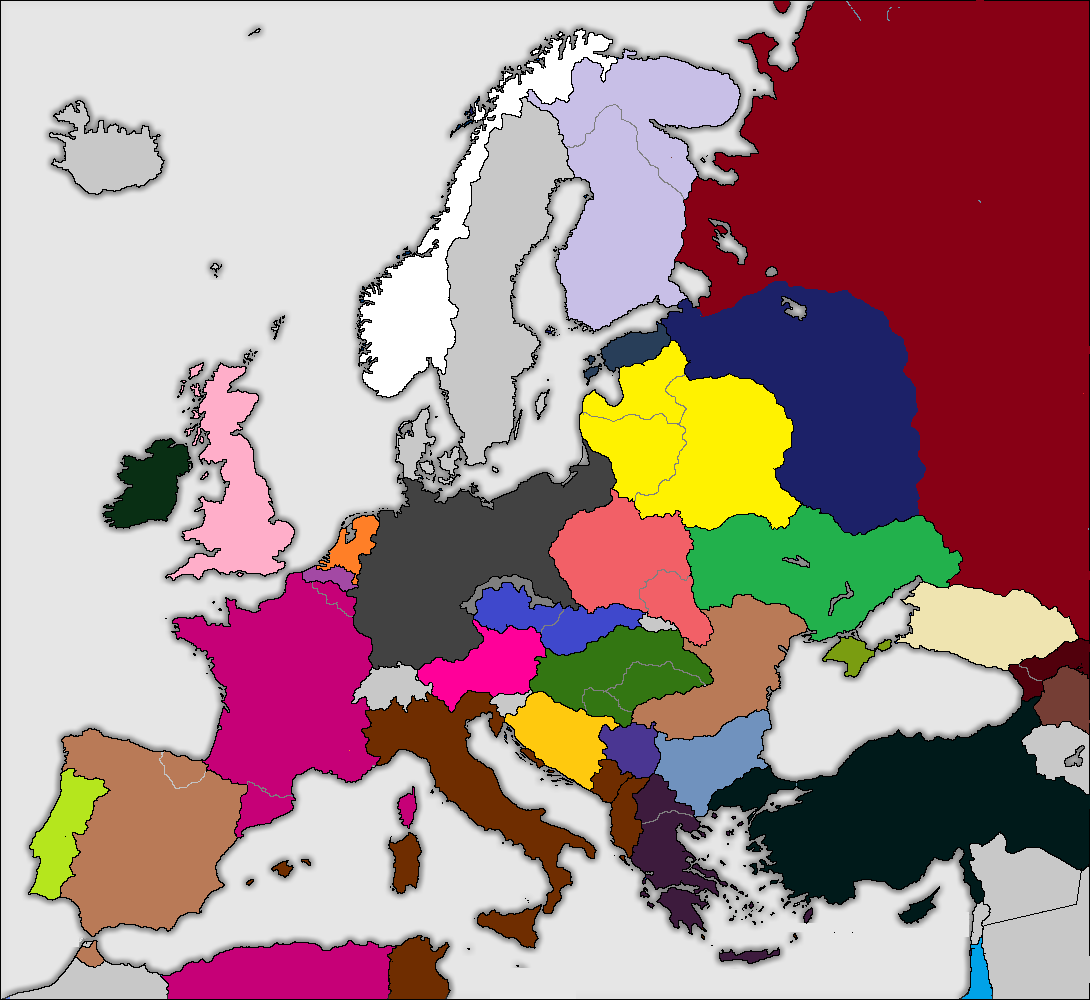 Countries of Europe in 1947. the allies occupy Western Russia for the rest of the year,as pro-rodzhaevskians are rounded up and put on trial. Germany and America wwill work together, at least for now, to rebuild Europe.
Finally finished with WWII! questions and criticism are welcome.
Poland vs the world 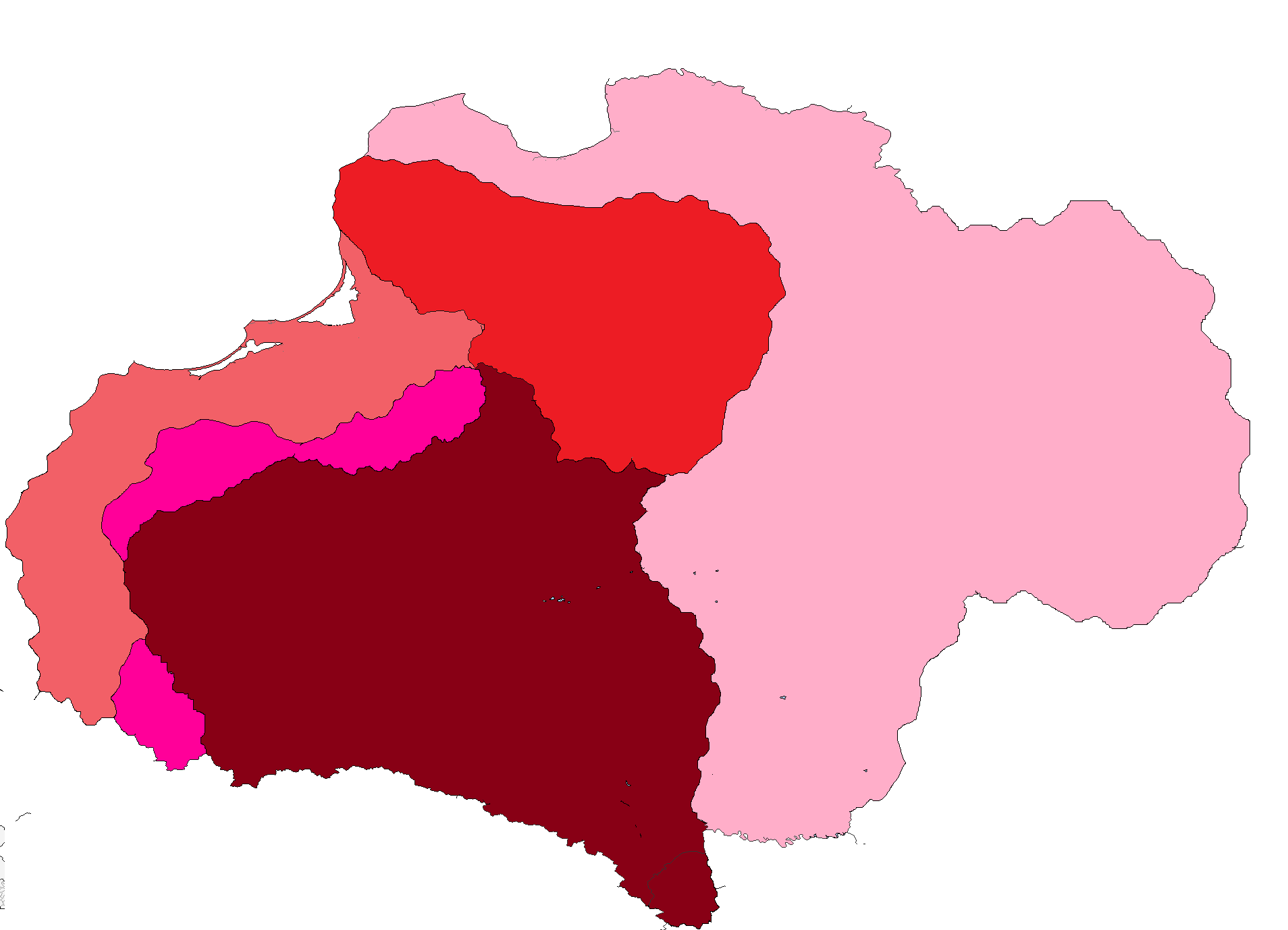 Inspired by the layers of Irredentism maps that have been popular on the main map thread, I made one for TTL's increasingly nationalist Poland.
Layer 1. Current borders of Poland.
Layer 2. Proposed merger with Lithuania.
Layer 3. Polish majority areas of Germany.
Layer 4. Areas of Germany with a significant Polish minority.
Layer 5. The rest of Baltoslavia, and areas of Ukraine with a Polish minority

Ooh boy can you smell what I smell? I can smell a legitimate claimant to the Armenian Throne yeehaw

Hindustani Person said:
Ooh boy can you smell what I smell? I can smell a legitimate claimant to the Armenian Throne yeehaw
Click to expand...

Wooooooo! Bring back the Bagratids!!!!

Višeslav said:
Wooooooo! Bring back the Bagratids!!!!
Click to expand...

No more mod there. This thread will continue

I’m currently working on a writeup about German Mittelafrika- its government and armed forces.
Some features include but are not limited to
this will be fun.
(it won’t)
@mikroraptor @Red Arturoist

I've started a little project of my own: mapping Interwar Europe, from the signing of the Armistice to the beginning of ww2
Threadmarks
You must log in or register to reply here.
Top
Top