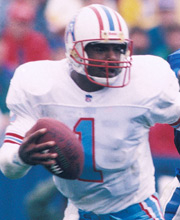 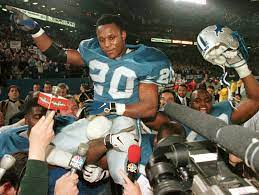 Waiting to see it
Who got Barry Sanders btw?

I don't think trading Ware for Warren Moon is realistic, and in all honesty I'd rather have Barry Sanders than Bo Jackson and Deion.

The problem the Lions have is that the 1990s were a terrible time to try and draft a quarterback. The cupboard was just barren - not a single noteworthy talent between Brett Favre and Peyton Manning, with every star QB in the decade besides Favre having been drafted in the 1980s. Rodney Peete was legitimately the second-best QB in the 1989 draft; in 1990 the only viable selections after Ware are Neil O'Donnell and Scott Mitchell, which just puts the team where they were at in the mid-90s; and in 1991 getting Favre means giving up Herman Moore, who's a vital piece for any sort of Detroit Lions success in this decade.

If I'm playing hindsight GM? I'd go after Doug Flutie. He was a very good QB for Buffalo in his late 30s, throwing to Eric Moulds and a washed-up Andre Reed. Imagine what he could do in his prime with all the weapons Detroit managed to assemble. Even better, IMO he'd be a good fit for Detroit's run and shoot offense - he has the mobility and the constant bootlegs mitigate the problems associated with his short height.

Donor
I would love to see a timeline were the Lions dont suck.
I was in a hotel in Paris a few years back at the bar waiting fir the restraint to open for dinner. Two pilots were sitting next to me talking football, They asked were i was from and i told them Detroit. The applogized and offered to change the topic….

The Detroit Lions… Rebuilding for 60+ years and counting..

Donor
BTW… one of the first things you really need to do is get a different owner, One that actually expects them to win would be good.
But just about anyone would be better then the Fords. Say Donald Duck or Goofy.
You must log in or register to reply here.
Top
Share:
Share
Top