Iron_Lord said:
Personally, if they had just rediverted there efforts to North Africa from the start, I think things would have gotten a lot diffrent.
Click to expand...

There is no reason for them to do so. What possible motivation would there be for the English, Norwegians, Germans, Normans, Flemish, and others to go to North Africa? The holy land had an idea behind it that could and did motivate people, North Africa does not matter one bit go the northern half of Christendom. The while point of the Crusades was to get all Christendom working together to redirect efforts away from fighting each other and towards something the pope saw as productive. You can't do that with a place most don't care about. That's why only Germans went on the Baltic Crusade and by and large later Crusades at North Africa were from Spain, Italy, and southern France. They were regional concerns.

Why does my heir have to have so many affairs? He’s creating so many enemies. I hate the seduction focus.

So I played the Nomads for the first time since Horse Lords came out (behind the curve, I know), and it's shockingly busted. I regularly wipe out doomstacks twice my size with the unstoppable power of "dude with a bow on a horse."

Sevarics said:
Why does my heir have to have so many affairs? He’s creating so many enemies. I hate the seduction focus.
Click to expand...

It finally got him killed unfortunately

Sevarics said:
It finally got him killed unfortunately
Click to expand...

Well, at least it looks like it wasn’t his brother who did it by accident.

I feel for those stats though.

ByzantineCaesar said:
Well, at least it looks like it wasn’t his brother who did it by accident.

I feel for those stats though.
Click to expand...

Yes I thought Wenceslao would be the perfect heir to reestablish the Mexican Empire but he thought too much with his second brain.

King Porfirio eventually died from stress and was succeeded by his grandson, Porfirio II, who was restricted by a regency council for several years before reaching his majority. He would take for his bride a native princess who had assimilated to Chilango culture and Sagrado Corazon faith while imprisoned during her youth. So far, together they have had two sons, Wenceslao and Porfirio, and wrought destruction on the pagan Kingdoms of Bajio and Colima.

After winning a grand war against the Atomicist nation of Sierra Madre, Porfirio was able to establish a Kingdom under a faithful follower of El Sagrado Corazon. Yet, despite this great victory, Porfirio II soon had to put down a Civil War when several vassals attempted to force gavelkind succession upon the Kingdom of Mexico. After leading the loyalist forces to a string of victories, the rebels were defeated. At which point, Porfirio added his loyal vassal, the Marques of Mixteca, in his war to conquer the Marquesado of Oaxaca from the pagans.

During the middle of that war, Porfirio was alerted that the United Kingdom of Rio Bravo and Rio Grande was in turmoil. His Uncle, Rey Carbajal II, was facing an independence war and a war to install Porfirio as King of Rio Bravo. Highly ambitious, Porfirio turned on his uncle and joined the rebels in pressing his own claim to the Kingdom of Rio Bravo. Following that, he declared vassalization wars on the Marquesados of the Rio Grande Valley and Tamulipas, which had gained their independence from his uncle. Now, Porfirio looks hungrily at Nueva Extramedura and Coahuilla, hoping to force their rulers to swear fealty to the Kingdom of Mexico.

The Sagrado Corazon faith grows strong as the resurgent Kingdom of Mexico progresses closer and closer to reestablishing the Mexican Empire. And Porfirio II's heir, Wenceslao, will continue his father's fight when the mantle falls to him. 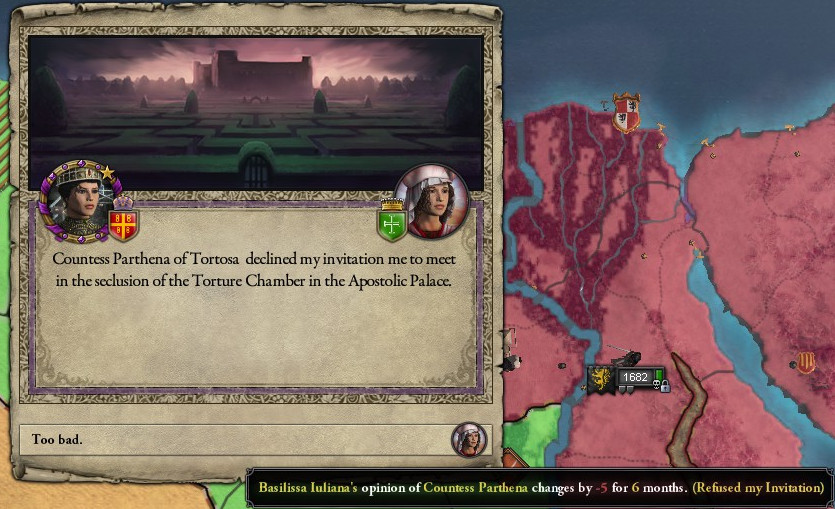 The audacity of this...

After a very long rule, Emperador Porfirio I / Rey Porfirio II passed away after outliving most of his children by his first wife. He remarried shortly before dying and has a newborn who is heir to the throne of the Kingdom of Texoma. He expanded the borders of Mexico greatly. While many of his children died due to the Red Plague, he was lucky to have many grandchildren.

Since his first born son, Wenceslao, predeceased him by a few years due to cancer, he was succeeded by Wenceslao’s eldest son, Wenceslao who had succeeded his father as the Marques of Guerrero.

So I was doing the Bosnian Monarch’s journey and then I accidentally became the Crusader King of Egypt five years into the game.

the damndest thing...there we were enjoying a party with good wine, women, and song, when suddenly my rival for the throne started to choke, and the very next minute he dropped down dead...the damndest thing...anybody'd think I had him poisoned or something stupid like that...

Anyone looking forward to Crusader Kings III? I was going to pre ~ order it for my Birthday the week before last, but I decided £41 is a bit too much money.

floyd22 said:
Anyone looking forward to Crusader Kings III? I was going to pre ~ order it for my Birthday the week before last, but I decided £41 is a bit too much money.
Click to expand...

I’m reticent about my ancient laptop’s ability to run it.

floyd22 said:
Anyone looking forward to Crusader Kings III? I was going to pre ~ order it for my Birthday the week before last, but I decided £41 is a bit too much money.
Click to expand...

Already pre-ordered and itching to play.

I’m disappointed that they are removing the Monarch’s Journey from CK2. I can’t see any reason for them to do so.

Civil war in the Duchy of Mallorca. The Count of Mallorca is rising up against his liege, the Duchess of Mallorca and Countess of Minorca in an attempt to make the duchy's succession elective. After one direct clash, each party has an intact army of about a thousand men on the other's island. Each island's capital, though, has a garrison of more than a thousand troops, so neither side is effectively besieging the other's castle. And it's just staying that way.

I guess the Count or the Duchess is going to run out of money, eventually?

Inquisition said:
View attachment 572763
The audacity of this... 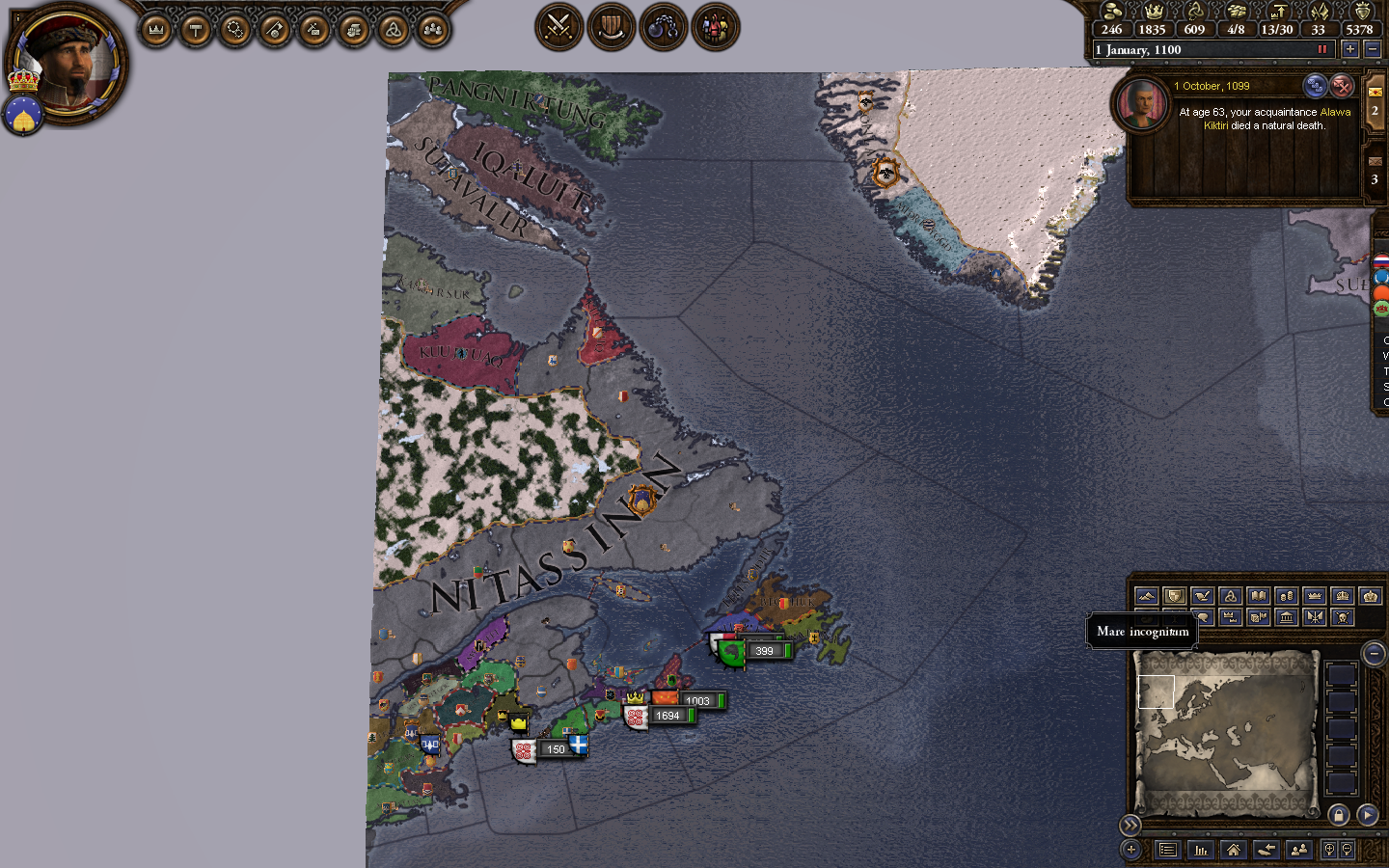 100 years ago, the Norse came to the land they called Vinland. It was a strange land, a land of warring tribes and mysterious gods, of thick woodlands and primordial landscapes. To use a phrase from a later time, it was to put it quite simply, a whole new world.

Suffice to say that in the century since then, North America has changed to quite an extent.

Though at the beginning of the 11th century there were 3 Norse settlements on North America, now only one remains on Newfoundland, and even its position is precarious. Those on the mainland were wiped out by the natives decades ago now. For a time, Erik the Red and his descendants would rule as the Kings of Greenland, but after a series of failed holy wars against the natives their power has waned - Newfoundland is now independent once again, as are the more hospitable southern areas of Greenland - only at the very northern reaches of Greenland do they still rule.

By far the greatest change of all though has taken place on the mainland. The Innu tribe of the Sheshatshiu was an insignificant inland group at the beginning of the century. That was to change with the ascendance to power of Amaqjuaq. A child of barely 4 when his father died in a skirmish with a raiding party, as an adult Amaqjuaq would come to subjugate the tribes of the Pakuashipi and Unamenshipit, declaring himself High Chieftain of the region. Though his conquests would go no farther, he would spend much of the rest of his reign embarking upon wars of humiliation on his neighbours in order to reinforce his supremacy, coming to build up an army larger than all his surrounding tribes combined.

But whilst Amaqjuaq may have been the one to bring Sheshatshiu to prominence, it would be his son Inuksuk who would truly change the face of North America. Equal parts ambitious and zealous with regards to his beliefs, Inuksuk had seen the power of Norse society, and moreover, the power of their religion - indeed, the very first war he fought upon his ascension to power was against a tribe of catholic converted natives. Obsessed with the realm of the spiritual, Inuksuk would spend much of his early reign conquering holy sites and building temples to the gods, before taking the action that would cement his place in history forever: reforming the Innu beliefs into a system akin to that he had seen the catholics use, with holy texts written in pictographs on birchbark, an organised hierarchy of Shamans and a proper system of longhouse-temples.

Inuksuk's legacy wasn't done there either. The influence of Norse society had already been spreading, and in the years after his reformation of the native beliefs, he would reform his system of government entirely into one much more akin to those of feudal Europe, to the point of even independently developing castles and well-equipped heavy infantry troops to enforce his rule. Ironically, by this point Inuksuk's domain was in actual fact more developed than the Norse holdings in Newfoundland and Greenland by this point.

More organised, better equipped and still as ambitious as ever, Inuksuk would sweep over his neighbouring tribes in a wave of conquest, his iron armed and armoured troops overwhelming their disorganised opponents even when there wasn't a numbers advantage. Ruling over a territory greater than any native tribe that had ever before existed, Inuksuk would come to refer to himself by a title once again influenced by the Norsemen of Greenland: King of Nitassinan.

That was all decades ago of course, and Inuksuk is long dead, even in spite of his attempts at obtaining immortality in the later years of his life. Today, the Kingdom of Nitassinan is by far the greatest power in Northeast America, and indeed in many ways could easily stand on par with the kingdoms of Europe. Yet even so, this may not be the case forever: the current King, Inuksuk II is old and sickly, and has only produced daughters - who the crown will pass to in the event of his death is uncertain, but not one of the candidates have even a fraction of the competence of their predecessors. Dissatisfaction is rife amongst the Kingdom's vassals - large factions are gathering in the hopes of achieving their independence, and with the spread of new religions from the Old World, division only continues to worsen.

The face of North America has changed drastically over the 11th century, and the 12th looks to be one no less tumultuous. But who will come on top? What will the years bring? Only time will tell...
Click to expand...