Winning a crusade in the newest version of CK2 is bananas 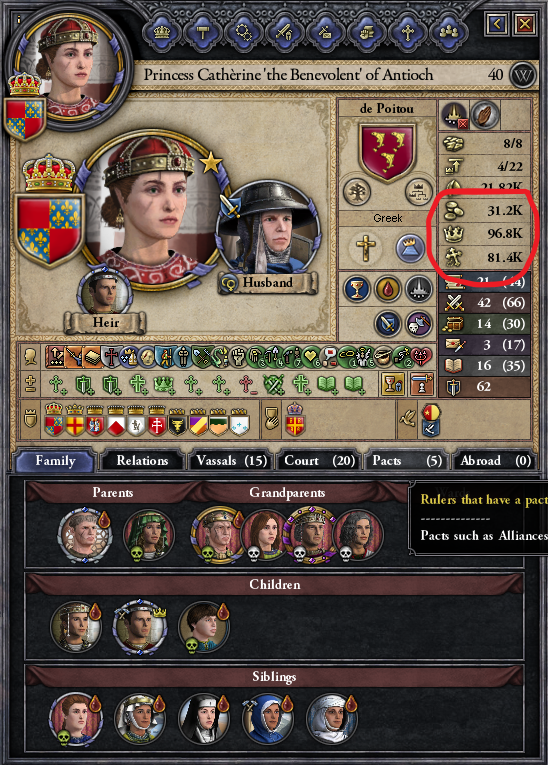 Rogelio III passed away, murdered while having a private conversation with his niece. So I present to you the newly update family tree for Rogelio IV, his wife, and his firstborn son

So many cousin marriages...

Zireael said:
So many cousin marriages...
Click to expand...

As is medieval Spanish royal tradition

My Americanist run that I started on Saturday didn't go as well as I hoped...

I started as Delmarva. My first ruler was Medicare at best but fortunately he died during the conquest of Philadelphia and was replaced by his much more capable 19 y.o. son.

Dude was a brilliant strategist and skilled fighter and his stats were average at worst. The vassals loved him.
The only thing that he lacked was Patriotism and Prestige but then New Jersey was taken over by the Hamiltonian heretics so I decided attack them (I even got the President to join me).

Then, obviously, during one of the last battles of the campaign I get the fuel event against a guy with -2 personal combat (while my dude had about 20). Then I got the event when I defeated that jobber but he stabbed me in the back while I was flexing before my troops. RIP

The heir was 5 so the regency started. First my new ruler's mom was the regent and things were ok but then she was fucked over by some balding mayor which make things somewath harder.

Then the Consumerist Prophet appeared in New York. I quit when after he took over New Jersey and most of Pennsylvania.

I will try to salvage it but I am affraid that it might be too late.

TheByzantineOttoman said:
Winning a crusade in the newest version of CK2 is bananas

The game is still broken even after she died:

I just lost a save game where I restored the Roman Empire with a Apostolic Turkish Dynasty called Göktürk... I'd quite liked that one, but my computer and HIP do not get along very well it seems, damn it all...

Guardonion said:
I just lost a save game where I restored the Roman Empire with a Apostolic Turkish Dynasty called Göktürk... I'd quite liked that one, but my computer and HIP do not get along very well it seems, damn it all...
Click to expand...

Mod broke, and I can't download it because the internet I have access to has a limited quota.

Oh. How did the mod break exactly?

Sevarics said:
Oh. How did the mod break exactly?
Click to expand...

It crashes the game whenever I try to load up the character.

Guardonion said:
It crashes the game whenever I try to load up the character.
Click to expand...

Hmm. It might just be a corrupted save issue. Hence why I suggested checking a previous auto save

We're back to a normal ck2 game 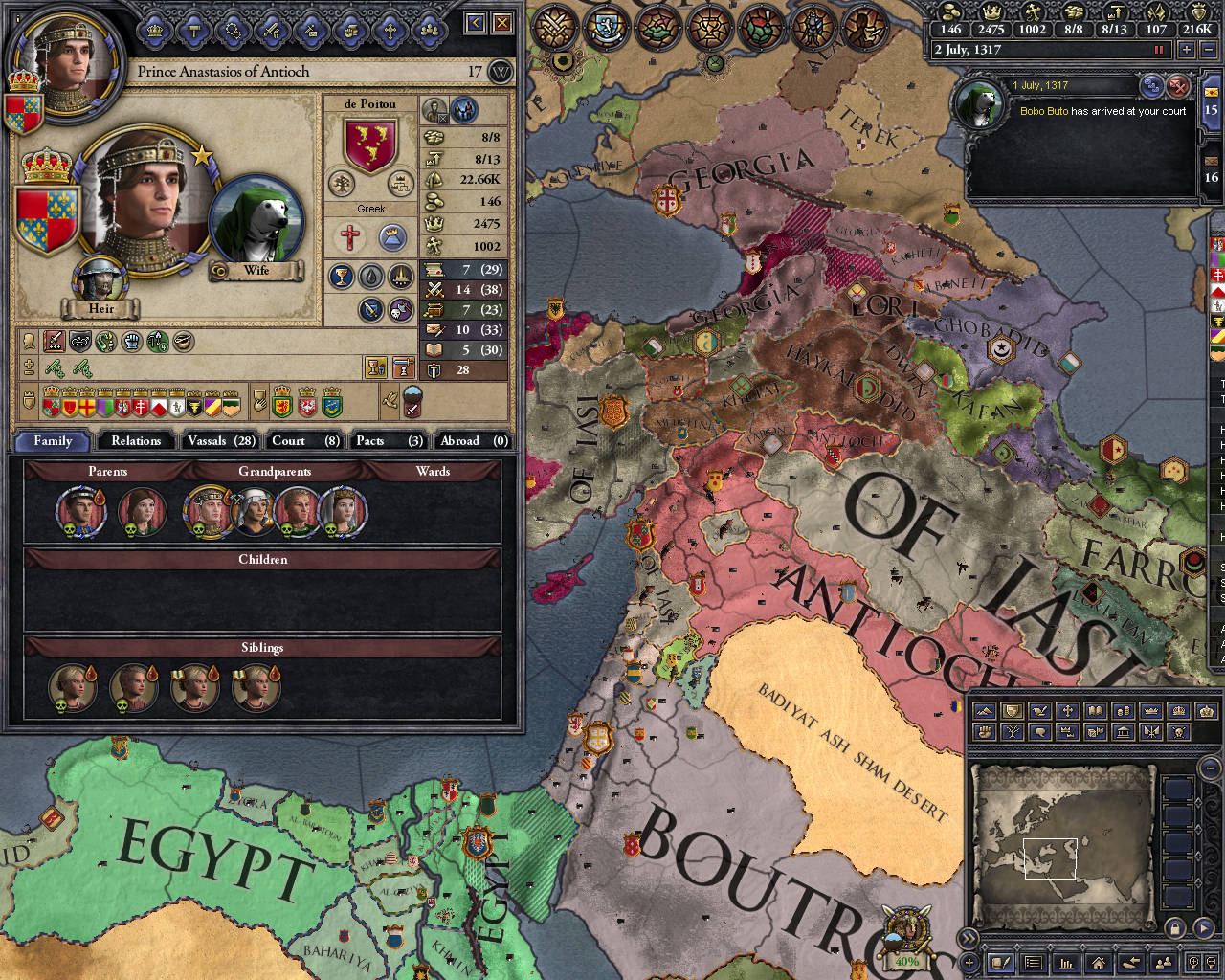 I'm still playing around with the idea of making an alternate history start, but doing it all via console command is very tedious. I've read up on modding but i'm still not sure on how to proceed. Creating a custom bookmark would do the trick I think, but I don't really know how to start. I plan on only using the cultures/religions/titles that are available in the base game, so that would make thing a lot easier. If anybody has some advice/help on how to implement my ideas, it would be greatly appreciated.

So far I've come up with the following ideas, suggestions are welcome!

Latin Empire: Capital in Ravenna, they control most of the Italian peninsula + the Dalmatian coast and southern Aquitaine. Their culture could be Roman, but Italian could also work. It would be neat if they have acces to the same decisions as the Byzantines, i.e restore the Roman Empire, Mend the great schism etc.

Kingdom of Lombardy: Capital in Milan. They start out as a tributary to the Latin Empire, They control roughly the duchies of Milan, Friuli, Ivrea, Genoa and Modena.

Kingdom of the Franks: Capital in Paris. They would more or less control Lotharingia and France. But their influence would not reach further that that. Could be ruled by a Merovingian.

Kingdom of the Burgundians: Capital in Lyon. They would be German cultured as I'm not planning on adding custom cultures, they would control the de-jure kingdom of Burgundy sans Provence.

Duchy of Tarragonensis (Barcelona): Capital in Barcelona. Also a tributary of the Latins, They act as a buffer between the Empire and the Visigothic States.

Duchy of Vasconia (Gascogne): Capital in Navarra. A Basque state stretching from Navarre to Bordeaux.

Kingdom if the Suebi (Gallicia): Capital in Coruña. They held out against the Visigoths, but are confined to de-jure Gallicia.

Other Ideas that are not yet defined: fragmented Visigoth states in Spain, A Breton or Welsh Britain.

The Goths(Kingdoms of Epirus,Greece and Thrace):Capitals: Epirus, Thessaloniki, Adrianople. They would take the place of the Franks in this scenario. they could start out similar to how the Karlings start in TOG startdate. So maybe three kingdoms in the hands of one family. They could have the decision to form the Holy Roman Empire if you manage to hold all three.

The Ecumenical Patriarchate: Capital in Constantinople, like the Papacy but in the east.

The Alans (Trebizond):Capital in Trapezous. Migrated into the decaying Eastern Roman Empire and settled in Trebizond.

Germanic Pagan Kingdoms(Saxons,Thuringians,Allemani and Bavarians): Since there are no Franks to subjugate them, they could remain pagan. However it could be possible that realms near the Latin west like the Allemani could be recent converts to Christianity.

Kingdom of the Avars: They would stay in the Pannonian Basin, as the Magyars are planning to invade somewhere else.

Kingdom of the Bolghars(Kingdom of Wallachia): They would still invade the Balkans but they would be stopped by the Goths and pushed back over the Danube. settling in modern Romania

Kingdom of the Magyars: Like in TOG start date they would start at war, but this time on a Greek rump state in Anatolia.

Less powerful Islamic states leaving the possibility open for more variety in the region. Not yet settled on the details.

Limited Slavic migration into the Balkans, they could go for Pannonia instead.

I don't have any idea what to do with India

I am thinking of starting a Game as Bulgaria soon [at the Latin Empire start date] to see how much of the old Byzantine Empire I can Reconquer before the Aztecs arrive on the scene. Does anyone have any Strategy suggestions, or opinions regarding how long it might take?

P.S: I assume Alternate History is allowed on here? This is alternatehistory.com, after all. [a lot of this is borrowed from a timeline called "The Kalmar Union," which I have been using as inspiration along with a couple of others.]

1326
17th November
In the Arab and Islamic Kingdom of Hejaz, the Islamic Scholar Ibn Battuta Joins a large Caravan of Pilgrims Returning to Iraq from Mecca across the Arabian Peninsula, but Instead, turns Back and Heads to the City of Constantinople. Making the most of his Education, he Persuades Byzantine Basileus Ivan Alexander to Employ him as an Agent for a Diplomatic Mission to Rome.

1336
In the Kingdom of Denmark, the Islamic Scholar Ibn Battuta, after Criss ~ Crossing Europe for Several Years as a Byzantine Agent, who find his Accountancy Skills Invaluable, Arrives in Copenhagen. Learning of America from a Vinland ~ Bound Merchant, Ibn Battuta Persuades King Eric V of Denmark to let him Lead a Trading Mission to Vinland. [with Brief stop offs in London, Edinburgh, and Reykjavík along the way]

1337
In the Kingdom of Vinland, the Islamic Scholar Ibn Battuta Visits the Royal Court of Queen Kristjana IV before Moving on to Tenochtitlan. He finds Isafjordhur small and uncultured Compared to Copenhagen, London, or even Reykjavík, but he is Impressed by the hard ~ Working People.

12th September
In the Aztec Empire, the Islamic Scholar Ibn Battuta, Heading Downstream from the River Mississippi, Hugging the Coast, and his Caravan are Twice Attacked by Bandits, but Ibn Battuta Escapes with his Life, although One of his Interpreters and the Cherokee Woman he had Picked up as his Wife are not so Lucky [something which Deeply saddens Battuta] and Arrives in Tenochtitlan, where he is Warmly Welcomed by the Aztec Ruler, Tenoch.

1340
In the Kingdom of Vinland, upon his Return from Tenochtitlan, the Islamic Scholar Ibn Battuta Presents Queen Kristjana IV of Vinland with Three Llamas and a Suit of Jaguar Warrior Armour.

Sevarics said:
150 years of cousin marriages in my Jimenez-De Ivrea-De Altavilla CK2 run and now the inbred trait has finally started popping up in some branches of the family
Click to expand...

My current Emperor’s daughter wed her uncle (emperor’s brother in law ) Rey Alfonso IV of Naples and so far they have had two inbred sons and an inbred daughter. If Alfonso and Isabella can’t produce a healthy heir, at least Alfonso’s brother Bohemundo has a healthy son of his own.

Damn inbred trait is finally catching up to the various branches of my family tree after 200 years of cousin-cousin, aunt-nephew, and uncle-niece marriages.

So the CK3 dev diary on religions came out today and it is amazing. This is a big improvement and makes me rather excited for the game

So what do people think of the new religious system? I really like it

herkles said:
So what do people think of the new religious system? I really like it
Click to expand...

It seems like it will be possible to create heresies and religions where being a complete degenerate, inside and out, is looked on very favourably - if there will ever be an After the End mod for Crusader Kings III, playing as a Lovecraftian cultist in New England is going to be fucking wild, man.
You must log in or register to reply here.
Top
Top