Challenge: U.S. gets involved in Algerian War as heavily as they did in OTL Vietnam

How could the history of American involvement in Indochina mirror its involvement in the Maghreb? Could you map out all of the players and polities? To the extent that Cambodia is Tunisia or Libya or Morocco? Maybe the Montagnards are the Berbers or Tuaregs or something. Also, perhaps we'll need to partition it earlier on to get the North/South Vietnam split.

I think if the U.S. could fall for the Domino theory nonsense over French Indochina, a part of the world that previously had nothing to do with American foreign policy ever ever ever (it's neither close to the Philippines nor related to Open Door in China), and later in Mesopotamia (which we only got into because of oil interests), it could probably get sucked into fighting in North Africa for some reason. But figuring out the reason is important. Why are we so opposed to Algerian independence? Are they supported by the Soviets- who are atheistic? This predates Maoist efforts in liberation movements. Why is the U.S. so focused on fighting in the desert, and what external support allows the FLN to hold on?

One crazy idea I have is that the Soviet Union is more influenced by the Muslim National Communism of Mirsaid Sultan-Galiev, a Tatar Bolshevik who was executed by Stalin in 1940. In this timeline, he lives and his work actually gains support as a means to win over Islamic countries to communism. And thus the FLN aren't just Algerian nationalist or just Communist in a setting where it follows the path of Vietnam exactly, but of a form of Communist that is tailor-made for the Arab liberation movements.

Another fanciful approach is to include an extant Ottoman Empire that's an international rival to the U.S. for some reason. Maybe the twist is it's not so much all of NATO vs. the Turks so much as it is say a smaller Anglo-American entente against them. (Though then why would resurgent Ottomans want to fight the France?)

A somehow pan-Arab nationalist project that succeeded under Nasser could potentially work as the Soviets in this scenario, but it feels almost more unlikely than the Ottoman idea even.

It was hard for the French government to get the US to support its Algerian war on anticommunist grounds for two reasons: (1) The FLN unlike the Viet Minh was in fact not Communist, and (2) the notorious position of the PCF during the war:

(1) "Yes, and that was the definitive turn away from the PCF’s anticolonial heritage. The PCF saw in the Algerian insurrection of November 1954 only individualistic terrorism. In his book Années de feu, Jacques Jurquet, the former PCF member who later became a leading representative of French Maoism, stresses the responsibility of the socialists in the colonial repression as well as the “distance between the courageous (. . .) commitment [of the Communists] against the Rif War” and their attitude in 1954.

"The PCF wanted the creation of a “real” Union française and in every single text or speech from its leader on Algeria the interests of France were paramount. The most memorable explicit colonial position by the PCF during the Algerian Revolution was of course the vote in favor of Prime Minister Guy Mollet’s special powers in 1956 in order not to “divide the republic.”

"During this second phase of the Algerian Revolution the last anticolonial figures of the PCF were either excluded or left the party (like Jacques Jurquet, in 1956, and Maxime Rodinson, in 1958, for example). With the support offered to Guy Mollet, the PCF positioned itself clearly as an associate of the colonial counterrevolution in Algeria.

"Fortunately, after the bloody repression of a peaceful demonstration by the Algerian National Liberation Front (FLN) in Paris, in October 1961, the PCF did condemn the police brutalities and murders but its declaration was notably filled with republican language..." https://www.jacobinmag.com/2016/10/pcf-french-communists-sfio-algeria-vietnam-ho-chi-minh/

(2) "On February 9, 1956, the Socialist -led government of Guy Mollet introduced a bill giving the government 'special powers' to act in Algeria. It asked for powers 'enabling it to take all exceptional measures in view of establishing order, protecting persons and property, and safeguarding the territory.' In order to do this, it allowed for the call-up of reservists, the suspending of the guarantee of civil liberties in Algeria, and divided Algeria into three zones, in the third of which , 'the forbidden zone,' populations were put in settlement camps and placed under Army control. The motion passed on March 12 by a vote of 455-76, with the French Communist Party voting for it. Jacques Duclos’ speech in defense of this vote was issued as a flyer." https://www.marxists.org/history/algeria/1956/duclos.htm

You're exactly right, which is why I invented not one but three farfetched attempts to justify greater American interest in the region, none of which has to do with the in-depth hard-hitting real world research that you've provided. Though one could always imagine the PCF not making that decision (it's surely not the only poor political choice that's doomed a revolutionary group, from Kerensky's pro-war views to Chiang's premature war against the CPC). Or maybe the U.S. just really wants to fight Nasserists or pan-Arabists or something? Or the FLN turns red for some reason?

Another question: would the U.S. have better success in North Africa than it did in Indochina?

Strategos' Risk said:
Another question: would the U.S. have better success in North Africa than it did in Indochina?
Click to expand...

difference is there is no nearby Major power supplying the Rebels, that when attacked, could start WWIII, big advantage 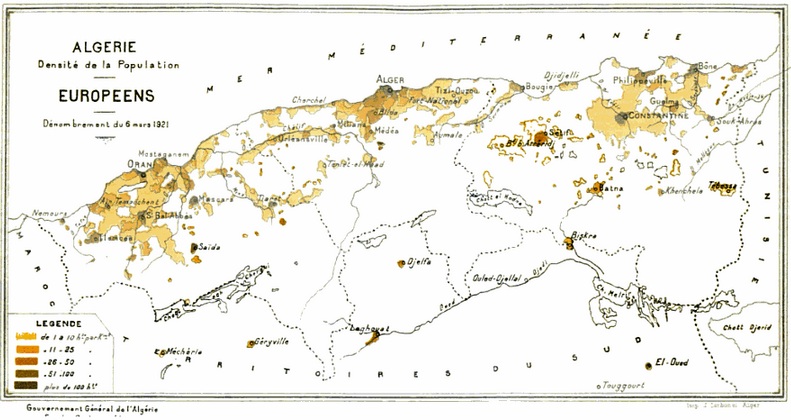 By 1960, were around 10% of the population controlled 25% of the arable land.
That makes for difficulties, a big understatement
Not sure you could get the USA onboard for the truly massive amount of ethnic cleansing that would be needed to get areas 'safe' from terrorism,
Maybe in making three separate homelands, based around Algiers, Bone and Oran, walled off, either literally, or 'only' minefields, barbed wire, watchtowers and all that sort
Last edited: Jan 14, 2020

Could the U.S. have forced the French to give better rights to collaborator natives, to make more Harkis? To make this an analogue of Vietnam, does Pied Noir resentment lead to an OAS overthrowing of the département government and something like the assassination of Ngô Đình Diệm?

Strategos' Risk said:
Could the U.S. have forced the French to give better rights to collaborator natives, to make more Harkis?
Click to expand...

That's fair. Well actually that makes it easier to make an analogue, since it's not as if the Americans pushed the South Vietnamese to treat the Buddhists and its citizens in general better. And with American, if not all NATO, intervention, the French would be able to have more financial resources to try and bribe natives with.

Strategos' Risk said:
How could the history of American involvement in Indochina mirror its involvement in the Maghreb? Could you map out all of the players and polities? To the extent that Cambodia is Tunisia or Libya or Morocco? Maybe the Montagnards are the Berbers or Tuaregs or something. Also, perhaps we'll need to partition it earlier on to get the North/South Vietnam split.
Click to expand...

The problem is that the US only became involved in Vietnam after France left and native rule was achieved--a proper analogue to the Vietnam War would have the US supporting one Arab-led republic against another after France granted them independence, and by that point it's not really the Algerian War anymore.

I mean France won the Algerian War OTL so what's the point really?

It wouldn’t be a perfect analogue but I kinda want to use the Pied Noir and the OAS somehow as well.

I suppose I just always found it fascinating that the U.S. has been involved with the Muslim world via the Barbary states and would be interesting to see them go back again, and it’d be interesting to see it via them backing the French in a different colonial region, and idk I’m just imagining a setting where disaffected G.I.s camped out in Casablanca (Thailand analogue?) while the war rages on, or becoming Foreign Legion mercenaries, or playing Colonel Kurz but in the Sahara so with Lawrence of Arabia aesthetics. I’m imagining that, in contrast with the War on Terror, an extended Algerian War getting the U.S. both numerically and societally entrenched in a war with a Muslim nation, and the cultural after-effects.

It seems like when Muslim nations have faced colonialism and imperialism they usually end up culturally intact afterwards. The French legacy in Algeria seems like a clean separation- the Pied Noir didn’t intermarry or try to convert the locals. So I’m wondering if American Cold War blundering would have made things go otherwise.

marathag said:
difference is there is no nearby Major power supplying the Rebels, that when attacked, could start WWIII, big advantage
Click to expand...

Totally agree. Without the US supplying the PLAF via the ARVN the NFL would have been critically short of supplies until 1967.

One last attempt to revive this idea- what if the PRC analogue was an United Arab Republic that actually worked because Nasser shares power with the Baathists and Iraq joins. Maybe even the remaining Hashemites in Jordan are overthrown and taken over by a local Baathist party that joins the UAR as well. Finally some sort of coup against the Libyan monarchy happens earlier thanks to all of these dominoes falling, and the U.S. (which in this timeline is anti-Nasser for some reason) decides that the buck stops at French North Africa. Perhaps the UAR was initially supported as yet another counterweight but later begins to align with the Soviets so the U.S. decides that their influence must be countered in Algeria and Tunisia.
You must log in or register to reply here.
Top
Top