The super star destroyer Executor crash lands on Earth, near the Persian gulf in the desert of Kuwait. After beginning repair in secrecy, the stormtroopers set out to quickly subjugate neighboring regions to bring their resources to the reconstruction effort. Arab countries are quickly overrun with superior weaponry, even though stormtrooper numbers are limited. To maintain order, the Empire begins recruiting locals, paying them well. To improve the industrial base of the Executor command post, the conquered lands are uplifted. Additional territories beckon. Taking advantage of British distraction with fighting in Europe, the Empire takes over Iran. Soon after, a civil war in Turkey allows the Empire to quickly bypass the undefended border and seize the strategically placed country.

By this time, the rest of world begins to understand the presence of the aliens, however the world is already locked in a three-way war between the western democracies, fascists, and communists.

By allying with the Western Democracies, the Empire is able to guarantee the safety of its colonial borders from naval invasion while concentrating its small but heavily armored army into overrunning the Eurasian landmass. Pushing the Caucasus all the way to Korea, the only barrier stopping the advance is the sea. Without enough airborne craft to land an invasion of Japan, the army waits while enough sea units are produced to distract the Japanese Navy. Once the way is cleared, the Japanese defenders find themselves completely outmaneuvered by repulsor tanks, who are able to ignore terrain difficulties by simply hovering over them. The mountainous island country, once though un-invadable was taken in short order.

Now that the dust settles, Darth Vader petitions the United Nation to join his dominion to the rest of Humanity. However, western leaders are suspicious, since allowing the Empire to participate in the U.N. would simply allow Darth Vader to usurp control from within. However, the alternative is another world war, one they cannot win now that Darth Vader has intercontinental ballistic concussion bombardment available... 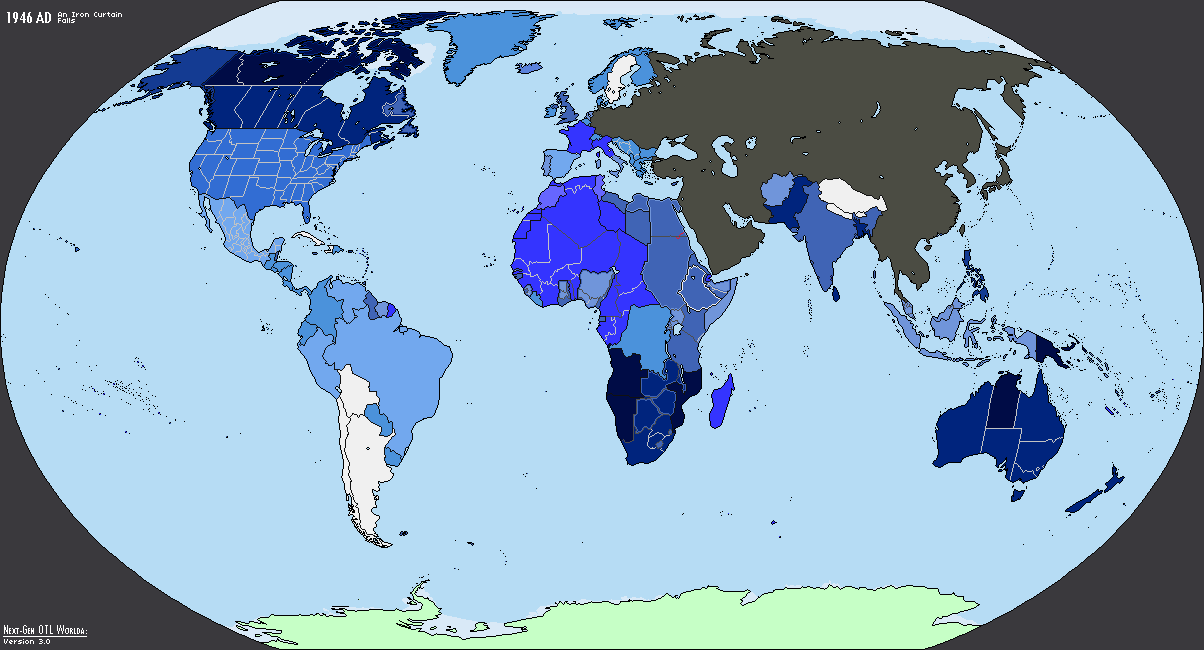 Try a run as communist Greece in the new dlc
72. Greece - Communist New

Calbertbreastpeach said:
Try a run as communist Greece in the new dlc
Click to expand...

The old world was falling away. In Greece, the monarchists were exiled and the republicans were forced to concede to the communists, to protect Greece from the rising fascist threat. Indeed, the British had a fascist takeover, and because of that, the French were forced to take a more active role in defending Eastern Europe from Germany.
When Germany invaded Czechoslovakia, the dominoes began to fall... Romania, Yugoslavia, Hungary were all occupied by the German Army. Luckily for Greece, bulgaria did not join the war quickly, and so was pre-emptively invaded to create a northern buffer region beyond the border.
On the Western Front, all was quiet, as the Maginot and Dutch Water lines proved too difficult for the Germans to break through.
Meanwhile in Turkey, the Turks tried to genocide the Kurds, who revolted in response. Turkey fell into civil war as the republicans tried to keep the country from falling into the hands of imperialists. Greece took advantage of the chaos to invade Turkey, saving the Kurds while finally accomplishing the Magli Idea.
However, just when things were looking good, Italy decided to invade Greece. Fortunately, Germans gotten too friendly with the Soviets, so the Italians joined the British Empire, who were more resolutely anti-communist.
Greece endured a devastating British naval invasion, but fought back and reclaimed the islands with the help of a new submarine fleet.
Meanwhile in the Americas, Mexico joined the Axis and raised hell throughout Central and South America, causing vast casualties to the Americans in irregular jungle warfare. Enraged at the Nazis for giving foreign support to the latino warmongers, the USA joined the French in the war against Germany. Not long after, the Italo-British and Franco-American alliances, paranoid about Nazbol cooperation, joined their alliances together to fight the combined "Berlin-Moscow Axis of Evil"
Although the western allies started with superior industry, the Soviets and Germans were able to mobilize their armies more quickly and on each front, they slowly pushed the allies back.
The first major breakthrough was in Italy, where the Greeks managed to capture Sicily. From there, they rolled up the Italian boot, capturing Rome and stopping only at the Alps, unable to break the Swiss and French defenses.
The second major breakthrough came when fascist Portugal invaded republican Spain, quickly overrunning it. However the Comintern managed to send a large army through a single port near seville, beginning a re-conquest that would trap millions of British and American soldiers. Once those pockets were cleaned up, comintern armies rolled through southern France, all the way to Paris.
This marks the annoying phase of the war, where the Americans and British sent hundreds of thousands of men into counter-invasions of Spain and France, each one contained at great cost to the commintern. Something had to be done to stop the naval invasions that could break the war effort. A plan was devised to invade England, to distract the Royal Navy enough to get it out of the channel, then temporarily close off the channel with the fleet of Greek submarines long enough to land armies and capitualte the British, removing the ports that threatened Europe.
The plan worked, but right after the invasion was launched, many of the transport craft and the entire warship navy were instantly destroyed by naval aircraft. Despite these losses, the Greek army had enough men to overwhelm the defenders, as they had overextended themselves sending men around the world.
Just as the British capitualed and the end of the war seemed close, the Germans betrayed the Soviet friendship agreement and tried to take over the Soviet half of Poland. In a lightning war, millions of Soviets were killed. This noble sacrifice blunted the spear of the German assault, allowing time for the Greeks to send their Army from England to counter-invade Germany from the Netherlands, while using the reserve army to liberate the Balkans from german occupation.
By the time Greek armies were at the gates of Berlin, there was a serious problem causing the army to be too weak to advance: occupying all of western europe required hundreds of thousands of men, men greece didn't have due to losing millions over the course of the war. On average, each combat division was down to 50% manpower strength. The only reason the frontline remained stable was because the Germans had also suffered horrendously, and thus couldn't counter-attack.
The Greek high command decided that the war would have to end in the next few months, so a huge gamble was made: the entire reserve army would be disbanded, and occupation of enemy territories would be handed over to local (often non-existent) police. The free manpower would be folded into the remaining combat divisions to make one final desperate push to capitulate the Germans.
Berlin was captured, Vienna, Munich, Hamburg... but the Germans hadn't given up and now resistance in occupied lands was dangerous enough that partisans might overthrow the Greeks. Until finally, right at the breaking moment the final German stronghold was captured, and the war ended.

In Europe, the Comintern reigns supreme, with a restored Byzantium proudly delivering socialism to the people. In Asia, the Japanese have managed to successfully fend off the American fleets and retain their new asian dominion. Australia, having quit the British Empire when it turned fascist, remains and independent democracy protected by the comintern. In Africa, Soviet armies liberated many colonies, and with the ceasefire stand before the new Afrikan Empire, risen from the ashes of the British Empire in Africa. In America, the fascist Canadians have taken over the remnant of territories belonging to Britain. The rest are democracies protected or occupied by the USA. 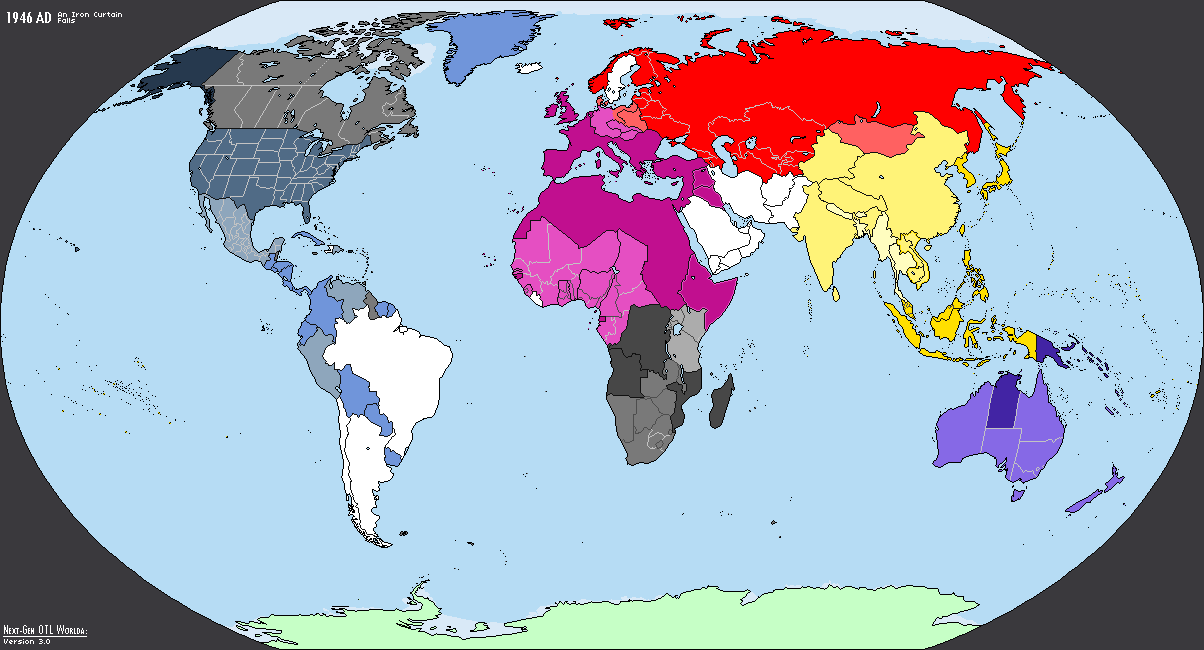 How about Communist Bosnia and Herzegovina in Millennium Dawn?

Can you do a Kaiserreich Cold War between Democratic USA on one side and Germany on other?
Thanks in advance!