Play Kaiserreich as the American Union State, then once you defeat the other factions, go down the Pelley route, conquer all of North America, grab some allies, and take over the world.

Scipio Africanus Major said:
Yes, it's the Victoria 2 mod, maybe you could play as Beornia (English argentina) and reconquer the british isles, or play as Lusitania (Portuguese texas and a releasable nation from Gran colombia) and conquer portugal+galicia, and yes the mod has a lot of "return home/reconquer lost land" campaigns
Click to expand...

Alternated between Beornia and lusitania every decade. By the end of 1935, Lusitania, unable to compete with other arcadian countries for immigrants and industry, fell far behind the industrial might of France, which had taken over protection of Spain. Along with the assimilation of moost of Portugal into Iberia, national rebirth of the homeland is an ever more fleeting goal...
On the other hand, although confined to the southern cone with a smaller population, Beornia managed to reform the monarchy enough to appeal to mass immigration. Industry was expanded by order of the king despite loss of profit in order to prepare the country for future confrontation to reclaim the homeland. This long-term strategy became solidified when French political instability and economic collapse immediately following the pyrrhic victory over Germany and Burgundy in the First Great War. Amidst this chaos, Ireland, Netherlands, and England became independent countries. The Irish were quickly re-absorbed, but England managed to raise armies to protect their borders. Scotland remained loyal to France to keep being protected from England.

Although England had thrown off the yoke of the French state, French elites continued their dominion over the common english folk, and the English republic was run by a dictatorial ethnic Anglois party. English diplomatic isolation raised hopes that Beornia would be able to take the country over from the ethnically foreign overlords.

In 1936, the king quietly assented when the rising fascist party overthrew the elected liberal regime to declare the Britannian Empire.

The Inca, having claimed territories settled by Beornia, first had to be crushed before armies could be sent to Europe. Then, an alliance with France was signed in order to use Scotland as a staging ground for the liberation of the homeland. Although the English had more divisions, their decadent regime had been slow to mobilize the economy for war production, meaning they had no heavy equipment and no manpower reserves. After a few months of brutal pushing through the highlands of northern England, the enemy was ground down under superior firepower, and spearheads broke out from the frontlines, liberating the rest of the country.
France was grateful that the English were destroyed, as their participation in the war meant that Poland and Muscovy would refuse surrender. But with no Great Powers resistingv France, they capitulated to the fascist invaders, While England secured the rest of the South America.

Now, Arcadia and Japan are the only non-fascist major powers, leading various free societies against the growing aggression of France and Italy. 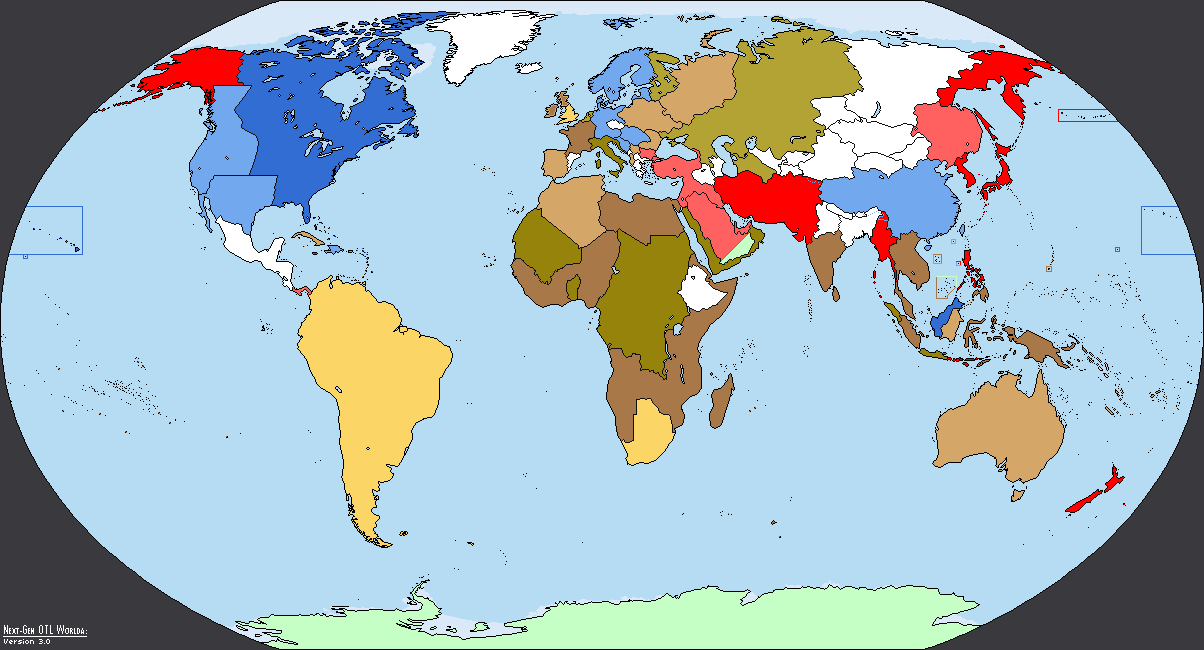 1. Do the Savinkovist-Longist-Sorelian Cold War (Kaiserreich)
2. Do the Sverdlovsk-reunified Russia, RFK's America and post-Speerite Germany (TNO: Last Days of Europe)

On that note, maybe you could do Red Flood!Kerensky Zheltorossiya and France in The Gates of Versailles?
66. Malaysia - Communist

Brunei is not a playable tag. except in modern day mod, but modern day mod doesn't have nukes, so I went with Malaysia. The goal was to nuke the city of brunei, and use nukes to kickstart the world revolution. 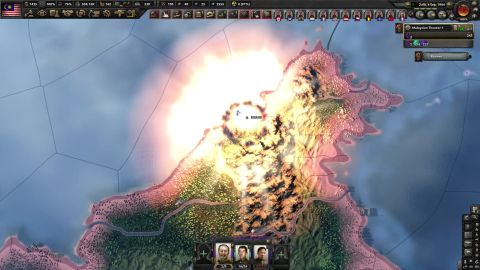 Brunei infiltrates the USA to nuke Washington DC, sparking the mass uprisings against the imperialist regime. 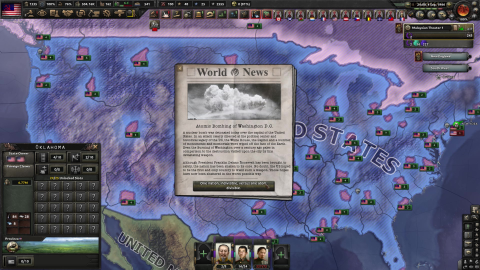 WW3, which had been at a bloody stalemate with tens of millions lost on both sides, finally ends in Soviet victory as communist leaders cross the Atlantic to take command over the dissolved capitalist states in North America that had spearheaded the counter-attacks into Europe.
Now, only the North Sea Republics and pacific fascists states remain as points of resistance. 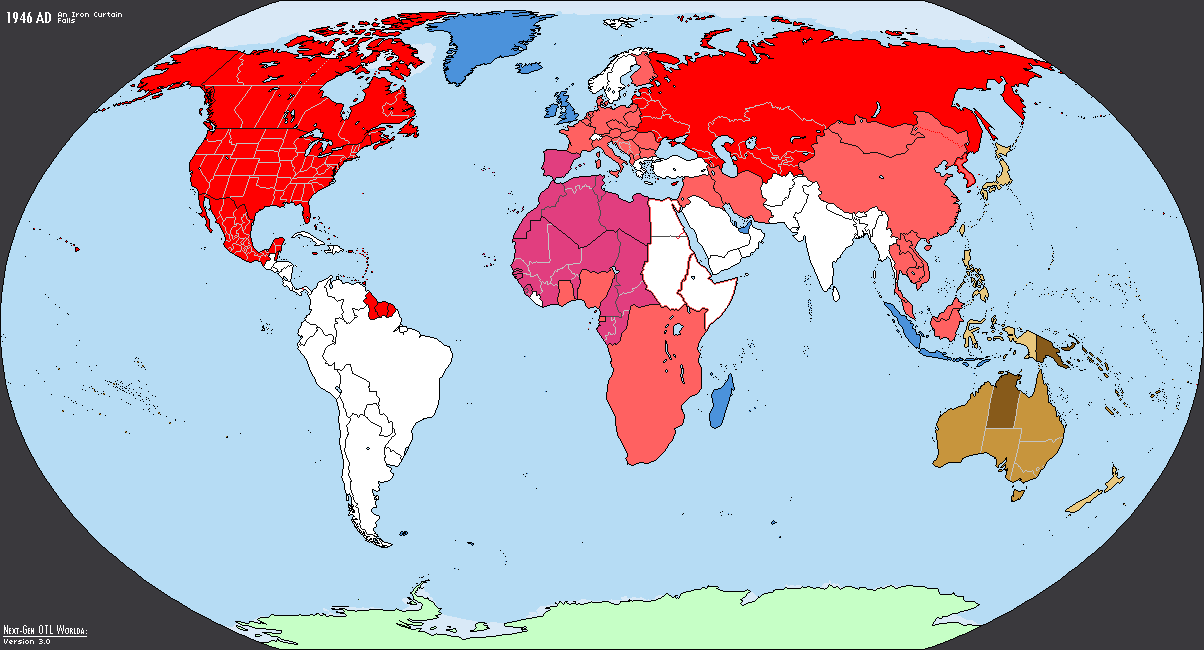 Although loyal to the English motherland, Australia is a Great Power in its own right, and very much the tail that wags the dog of the British Commonwealth.
Global democracy is safeguarded by the Anglo-German concordat. Autocratic monarchies endure in Turkey and Japan, but in Southern europe, terrible economic crisis along with military disaster has caused radical fascists and communists to try their hand at ultimate governance. The reds came out on top.

As for the internal situation in Australia, it was decided very early on that Australia would be a project to bring England closer to Utopia, so political reforms were chased to implement not just a good democracy, but economic reforms protected the rights of workers, and made the country and uniquely safe and fair place for people of all classes. This stability and prosperity attracted millions of immigrants, who built up and developed Australia, especially its industry, which in turn increased its prosperity and power. 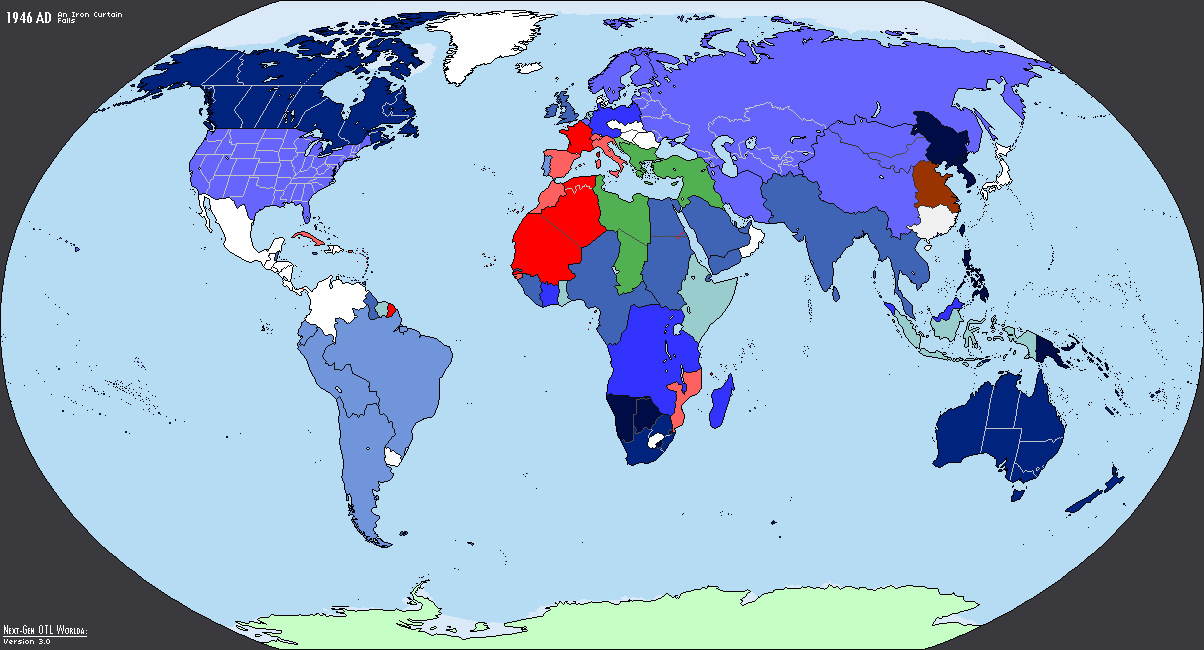 Whiteshore said:
France in The Gates of Versailles?
Click to expand...

Long ago, Napoleon betrayed the revolution, replacing the idealism of the republic with a new decadent dynasty. After the carnage of the first world war, the people of Europe are finally taking another change to throw off their chains.

France is the epicenter of the development of human rights and progress. From there, a fleet and army was assembled to liberate the world. The reactionaries in Britain, mislead by their monarchists, provoked France with attacks in the Channel. In response, France was able to use a fleet of submarines and land-based aircraft to close the straights, allowing a french army to cross the water, finally accomplishing what french armies had failed to do for hundreds of years.

With the main rival defeated, french forces assembled a great army of tanks, advancing as a wide bulldozer, toppling governments one by one from west to east, until the furthest reaches of Russia and the pacific island colonies were liberated. 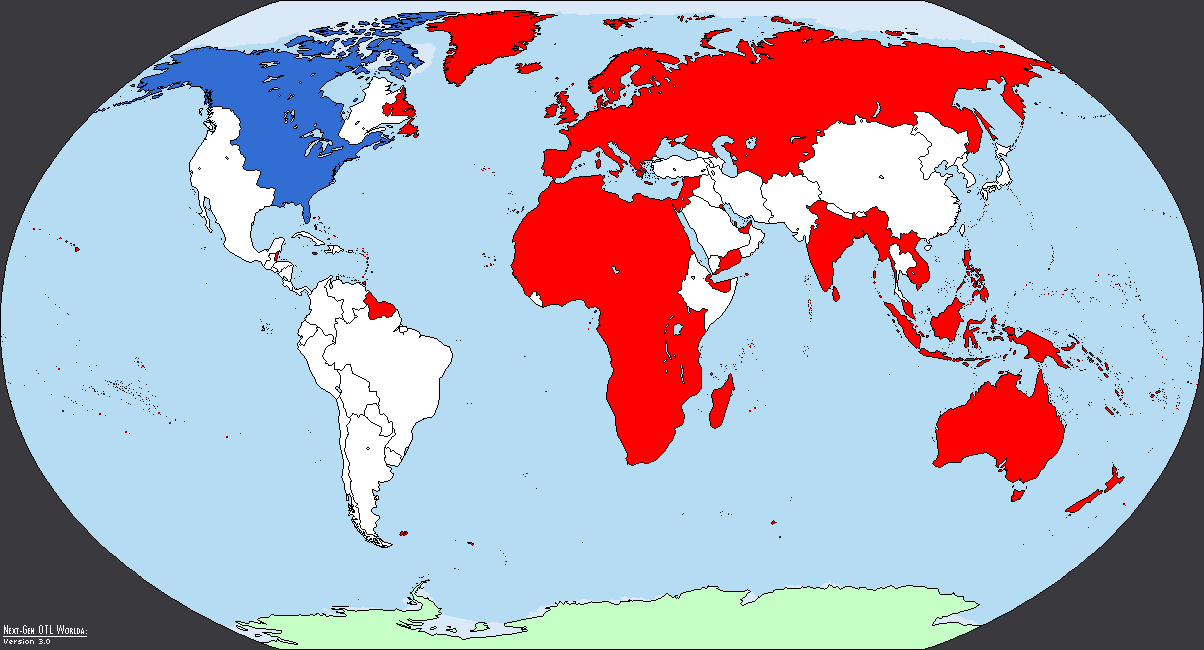 I dare you to play as the NCR expedition in the Equestria at War mod, you can play it how you please.

After the death of Alexander the Great, his generals greedily tore apart his empire, not just establishing their own successor states, but each warring against the others to capture as much vulnerable territory as possible. In the midst of this chaos, the Persians chafed under Greek rule. Under the leadership of a minor median lord, they gradually joined the uprising against the Seleucids until a solid base had been established. From the core of Persia, border regions were conquered in turn. Parthia, Anatolia, Babylonia, Egypt, India. All bowed before the might of Persia restored. The Macedonians, ejected from their ventures in Asia, turned north, establishing colonies along the major river systems, and using fort systems to enclose the basin plains of Pannonia and Dacia. From there rich agricultural lands, further exapansion was fueled to bring the hand of civilization to the barbarous tribes beyond.

Meanwhile, the Gauls were almost united by a dominant tribe from the north, however this tribe succumbed to in-fighting and disintegrated. However, the seed of unity was planted in the minds of many tribal leaders, and so the unification of the Gauls was completed by a more centrally located tribe. After Gaulic unification, the pressed into Italia, defeating the upstart Romans and securing Iberia from the Carthaginians.

Defeated, humiliated by would-be barbarians, decimated by endless civil strife, the Romans and Carthaginians found much common ground and were able to lean on each other to preserve their independence from the larger empires closing in on them from all sides.... 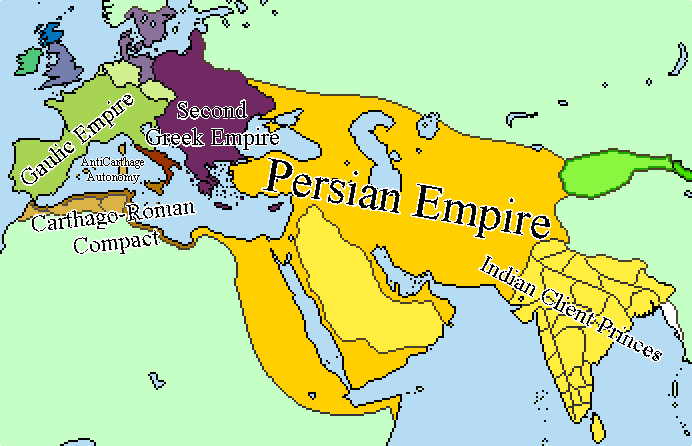 Not just under Batov but do one for Yeltsin as well, @BMN.
70. China - Democratic

For the first few years, we really struggled pacifying the North. But right when we finally turned the tide against the Fengtian false manchus, the Japanese intervened to protect the new puppet regime they installed there. At first, the initial Japanese offensives were devastating. However, this ironically gave the Japanese too much confidence while at the same time frightening the rest of China. Thus, once Japan tried to seize Shandong, the rest of the Chinese warlords agreed to peace with each other to form the United Front to expel the foreign invaders.
We also had help from Russia and the Entente.
Although the warlords remain functionally independent, and the southerners have declared their rival federal government, it is only a matter of time before the legitimate monarchy uses its superior industrial and population base in the North to absorb the wayward autonomous regions back into a unified China. 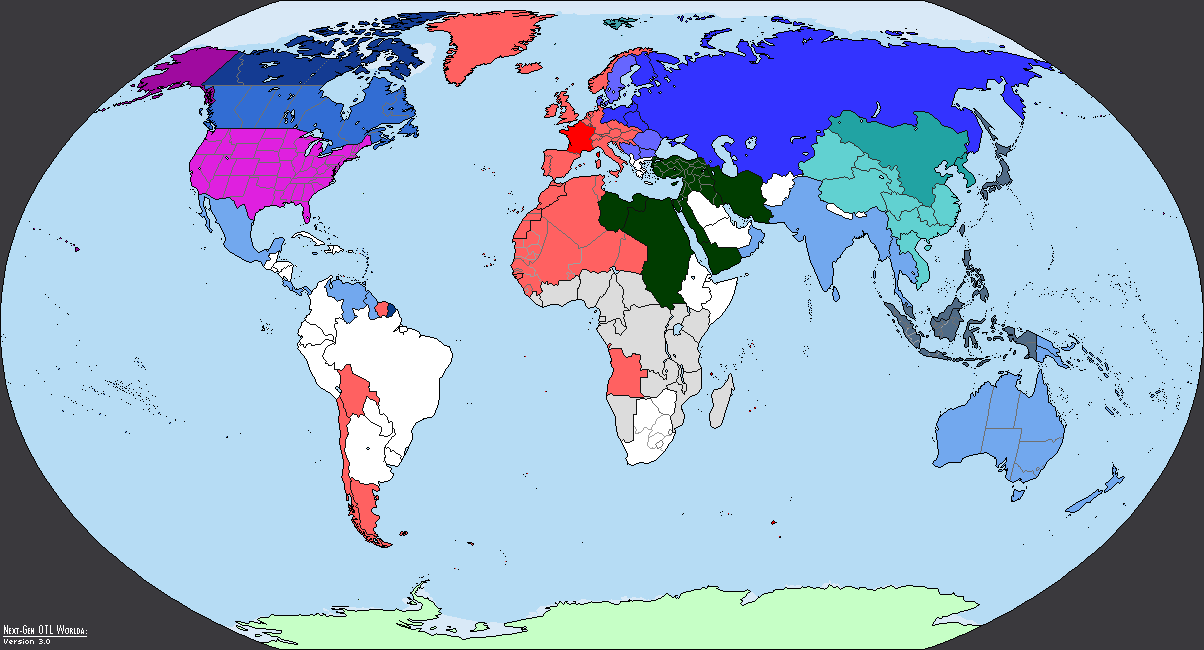 Or could you do Millenium Dawn Classic Islamist paths for the US, UK or France?
Threadmarks
Reader mode
You must log in or register to reply here.
Top
Share:
Share
Top