Now this is how the 1993 Progressive Conservative Leadership Election should have happened! Beatty, Wilson, Valcourt, McDougall all take a run at it, making what in OTL was a two person race a close three person race.

Also yes, I know it should say Progressive Conservative, but I was having a lot of difficulty with the Wikipedia templates and whatnot and I gave up.

Anton Snow/Stark? Khal El? Ser Brus Wayn? Please someone do a TL of this

I hope you can see that, because I cannot. Despite difficulties, I wanted to have some fun with three different divergances from the OTL American 1912 Presidential Election.

Think fans of this and the 'original' 1958 version ("Sink the Hood!") are about as rabid towards each other as Wrath of Khan/Undiscovered Country adherents. Both great.

After the god-awful 1995 re-make of the Empire's favourite Naval flick (think Pearl Harbour-love-story levels of awfulness), TLBC has done much to re-vitalize the War Film genre, with the long-delayed Dambusters remake scheduled for release in 2014 and "Market Garden" later this year.

The film is also famous for having most internal scenes set on the Hood shot on location aboard the venerable ship, with actual Navy ratings from the ships then at Scapa Flow acting as extras in some shots.

The United Kingdom of America's election of 72.(From a timeline I'm trying to write ) 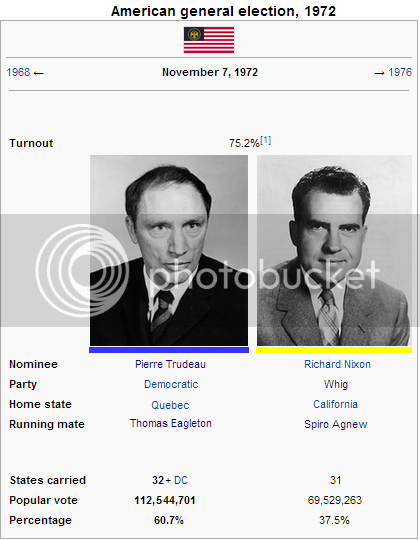 Damn, I would very much like to see that timeline. When will you publish that?

Check to see my stalled Imperial Commonwealth of the United States TL, you might get some ideas. (America turning into a metropole of the British Empire, gradually and surprisingly. It's an Anglo-Ameriwank. Hahaha.)

Some blatant wish fulfilment
The Democratic Workers' Party, currently the largest component party of the Progressive Social Alliance. Aside for Parliamentary Leader, the names are completely fictional.

I hope you can see that, because I cannot. Despite difficulties, I wanted to have some fun with three different divergances from the OTL American 1912 Presidential Election.
Click to expand...

I can't see it, not easily at least. So I uploaded it here:

Libertad said:
Damn, I would very much like to see that timeline. When will you publish that?

Check to see my stalled Imperial Commonwealth of the United States TL, you might get some ideas. (America turning into a metropole of the British Empire, gradually and surprisingly. It's an Anglo-Ameriwank. Hahaha.)
Click to expand...

Haha I will, I really do need some ideias.

The 2080 election infobox for my New Frontier series.

The United States presidential election of 2080 was the 84th quadrennial (the 23rd under the U.S. Constitution of 1991), held on Tuesday November 5, 2080. Incumbent President Donna Harlan-White of the National Party declined a second term, stating that she had accomplished all her goals during her one term in office. The National Party nominated U.S. Senator and former Prime Minister Benjamin G. Thurman of Michigan. Thurman, a long-time White House insider under former President Douglas Grayson, faced no serious opposition in the primaries after former Prime Minister Jordyn Blythe and Governor Elijah V. Crosby of Ticonderoga declined to run. He won all 144 contests, the first non-incumbent to do so since General Brian Ortega swept the Republican Primaries in 2020. However, a group of dissatisfied delegates at the 2080 National Party Congress in Denver, Colorado, walked out of the convention, upset at the party's weak stances on expansionism and civil rights. The Independent Nationals nominated Farside Commonwealth Senator Clay Onizuka of South Artemis and and Albert Hernandez, former Associate Justice of the U.S. Supreme Court, for Vice President. While Governor Crosby left the National Party Congress, he did not attend the convention that nominated Onizuka.

The Republicans and other minor parties had preformed poorly in the 2078 midterm elections, allowing the Nationals to attain an absolute majority in the United States Senate. They nominated moderate Sarah Winstead, Governor of Nevada, for President and former Governor Mike Hillman of Franklin for Vice President. The Democratic Party, who had managed to gain seats in the U.S. House of Representatives in the 2078 elections, nominated Representative Collin Cameron of Spirit for President. Cameron had originally selected Hellas Premier Jarret Haslam of Plymouth as his running mate, but when news broke that Haslam had fathered a child with a Martian woman, Cameron dropped Haslam and selected newspaper editor April Chandler of Saratoga. The Democrats continued to take a hard anti-civil rights, pro-segregation platform in order to draw votes from the Nationals and the Republicans. Helen Cobb, former Mayor of Wichita, Kansas, was nominated by the Green Party for President, defeating U.S. Representative Vince Bowe of California and political pundit Brutus Braxton for the nomination. There was a significant push to draft former National Prime Minister Jordyn Blythe for the Green Party nomination, but she declined. Cobb selected Bowe as her running mate.

The Christian Families Party, a political outgrowth of the Share Our Wealth Movement of televangelist Father Bryce Callahan and newspaper editor Graham Olson, decided to run a Presidential candidate in 2080. Father Callahan and Olson had both been supporters of Douglas Grayson and the National Party but had begun to break with them over the issue of economics, worker's rights and civil rights. Both Callahan and Olson declined to run, and instead, Chicago City Alderman Eileen Wash Jennings was nominated with the Reverend Ryan Altidore, senior preacher at the South Shore Christian Church in Bakersfield, California, as her running mate. Several regional parties, including the centre-left New Yukon Farmer-Labor, the autonamist Thracian Reform Party and the blue-green Blue Ocean League of Dacia all ran candidates.

The ongoing issue of civil rights for non-humans and non-Terrans was one of the major factors of the campaign, as Cameron and Wash Jennings campaigned hard against integration. While integration were parts of both the National and Republican platforms, Thurman and Winstead downplayed that, while only Onizuka and Cobb (out of the major candidates) supported civil rights. Ongoing military intervention in Cydonia on Mars, rebuilding of Io after the Ionian Mutiny and colonial expansion in the Outer System were also major issues in the campaign. With a sluggish economy that was showing signs of growth, Thurman ran a primarily positive campaign emphasizing the economic growth and recovery of the nation under the Grayson administrations of the 2050s and 2060s.

Thurman won the election, winning 750 out of 1,432 electoral votes, forgoing the need for a second round, becoming the first candidate since President Douglas Grayson in 2068 to win an outright majority in the first round. Opposition candidates claimed corruption, voter intimidation and electoral fraud, especially in larger urban areas, but investigations launched by the Harlan-White Justice Department turned up nothing. The Nationals lost seats in both houses of Congress, but retained their majority in the House and their absolute majority in the Senate.
Click to expand...

Peter Lougheed assumes the mantle in 1976 and leads the party to a real victory in 1979 against Prime Minister Pierre Trudeau. He sweeps the both the West and Ontario, makes little gains in Quebec and builds inroads in Atlantic Canada.

With Lougheed as PM there is no NEP, possibly no repatriation of the Constitution and no Charter of Rights and Freedoms. The legend of Rene Levesque getting stabbed in the back probably wouldn't have happened and thus no meme of Quebec being left out of the constitution. The factors leading to the Tories demise in 1993 would be drastically altered.

For the '83 one, you may want to consider making it wider - I know you can do three per row so it doesn't look uneven.

Ah well, I guess I'll do that for the next one. No big deal.

Donor
Wikibox from my TLIAD here, a UK 2010 election without the leaders' debates.

Daniel Johnson lives and leads the Unionists to a comfortable victory in 1970. The PQ enters the National Assembly but not quite the breakthrough they were hoping for.

Banned
Is anyone hear willing to walk a poor boy through how to make one of these?

RogueBeaver said:
Daniel Johnson lives and leads the Unionists to a comfortable victory in 1970. The PQ enters the National Assembly but not quite the breakthrough they were hoping for.
Click to expand...

Beautiful. Nothing better then a Union National victory!

mowque said:
Is anyone hear willing to walk a poor boy through how to make one of these?
Click to expand...

Copy an infobox into your sandbox on Wikipedia, and go ahead and edit. But the Wikipedia staff don't seem to like that much, so I'd rather just copy it into MS Word or something, edit it there, then copy it back into Wikipedia, preview the page and take a screenshot of it without saving.
Top